Visit to Paria and the Toadstools

On Sunday we invited Dave and Sue to join us for a visit to two interesting locations along Rte. 89 west of Page.  For the first stop we drove about 34 miles to a dirt road on the north side of the highway for a visit to the ghost town of Paria (think “Maria”).  A well-maintained dirt road leads about five miles to the area where the town was once located. 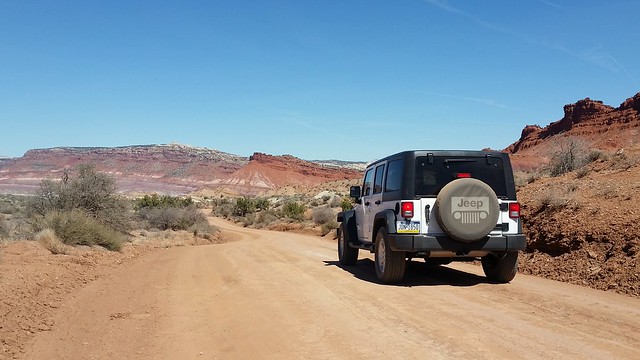 As we crested the first hill we were stunned by the beautiful rock formations on our right. 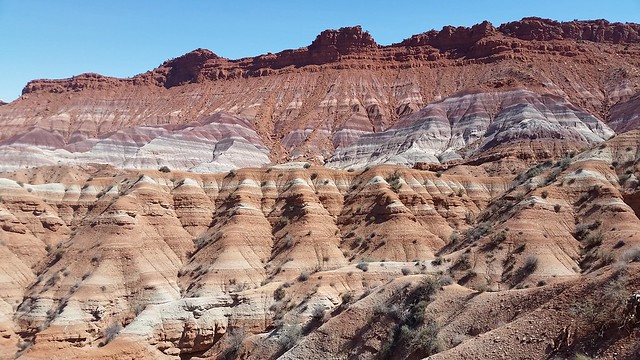 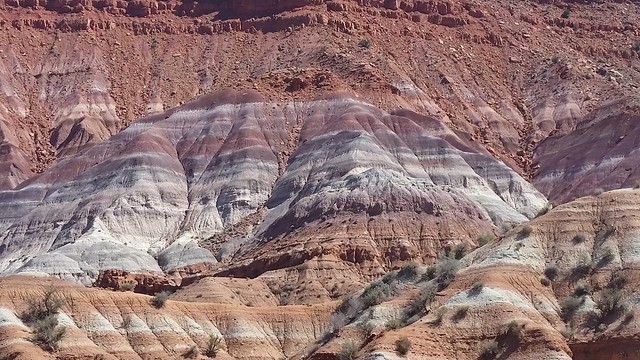 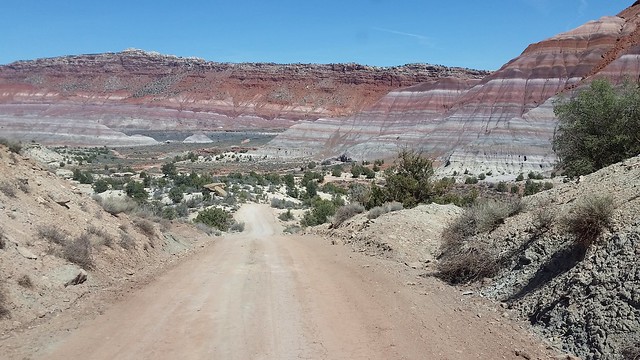 Heading down to Paria

This area was first settled by Mormon pioneers in 1865.  Pahreah, as the settlement was first named, grew through the 1870s with a general store, a church, a number of sandstone houses, and many log houses supporting a population of 47 families.  The town hit hard times when the Paria River flooded every year from 1883 to 1888, washing away fields and even some buildings.  People started to move away and by 1892 there were only eight families left.  But for some reason the town was granted a post office that year under the name Paria. Not much changed until a small gold mining operation was established here in 1911.  Within a year, that too was wiped out by flooding.  The post office closed in 1914 and a lone bachelor prospector held out until 1929. 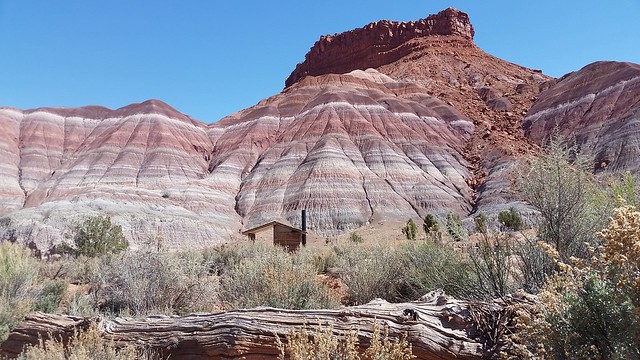 The area where the “town” was located now just has a pit toilet and some picnic tables maintained by the National Park Service (the area is inside Grand Staircase – Escalante National Monument). 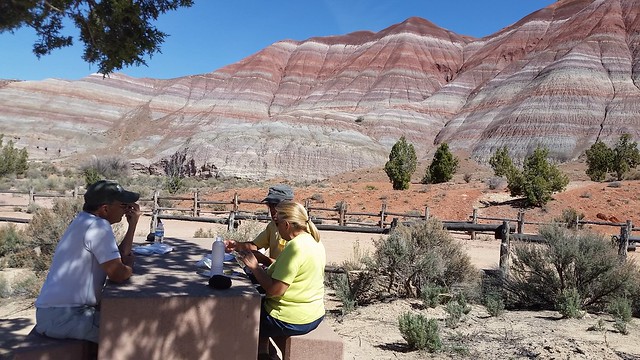 Just north of the picnic area is the remains of the town cemetery.  Graves are marked with plain stones with no inscriptions and there is a plaque honoring early settlers. 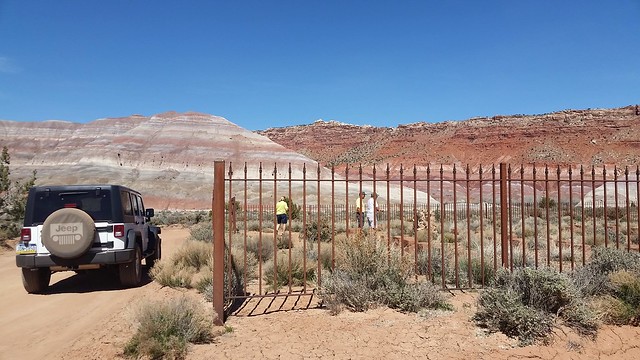 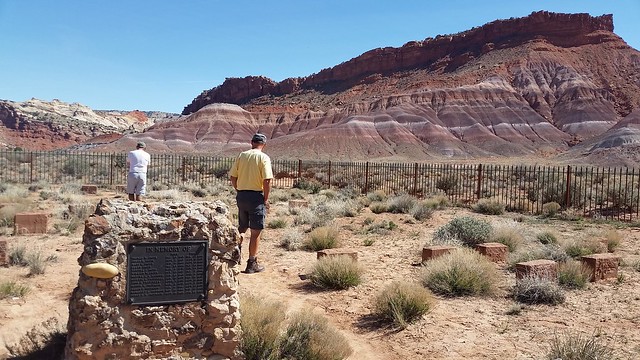 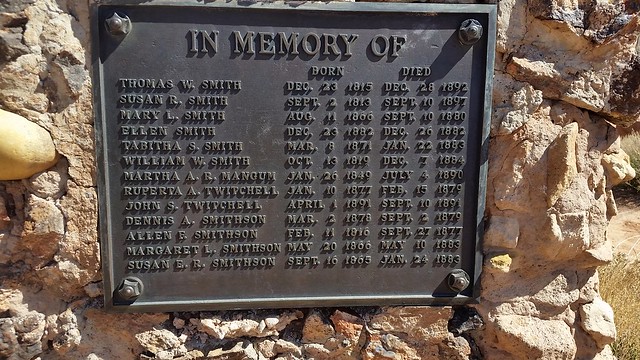 The road continues north for another two miles where it terminates on the south bank of the Paria River. 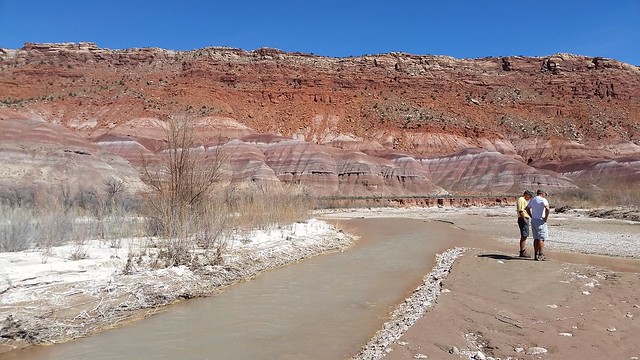 We drove back out to Rte. 89 and went 11 miles east to a parking area on the north side of the road for a visit to the Toadstools.  It’s just a short hike of less than a mile up to the area with the toadstool formations. 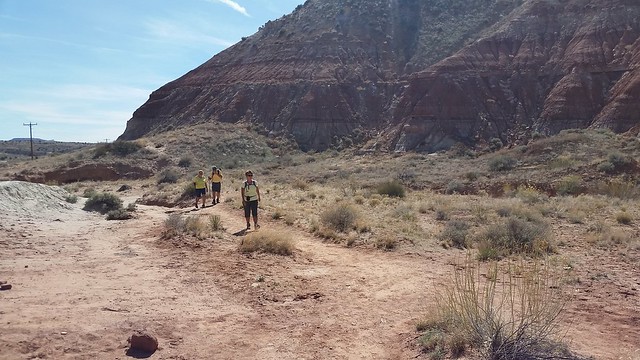 The trail follows a small wash 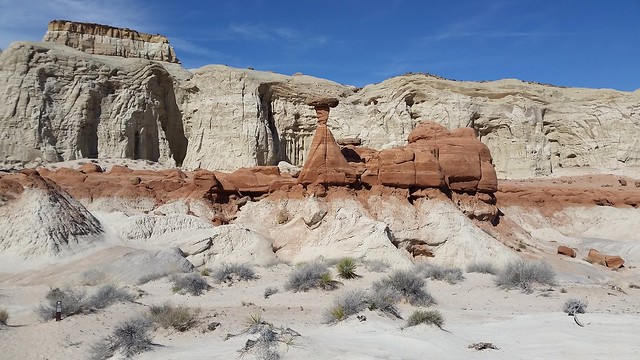 The area of toadstools soon came into view

A toadstool is a spire-like feature with a boulder perched atop a pedestal rock, like a mushroom or “toadstool.”  It forms when softer rock erodes away, leaving a column sheltered from wind and water. 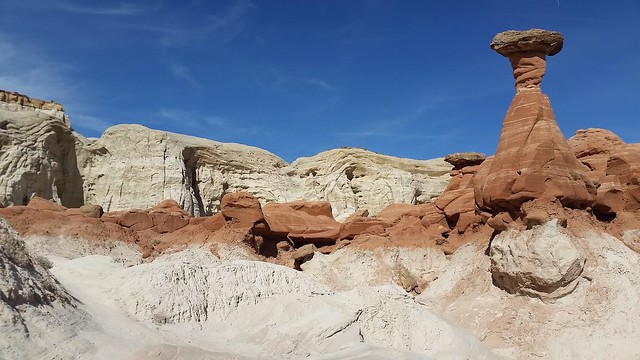 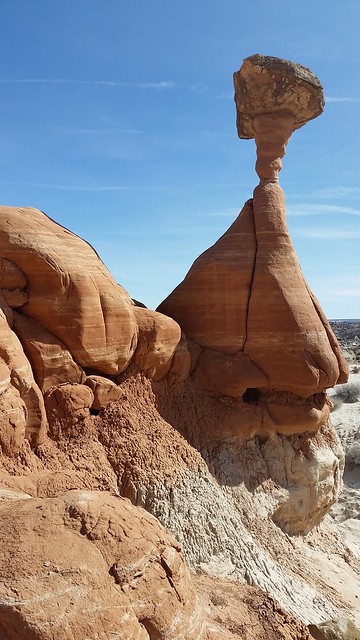 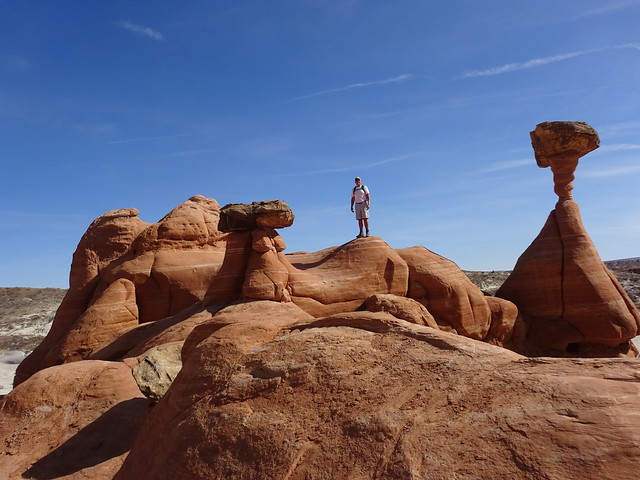 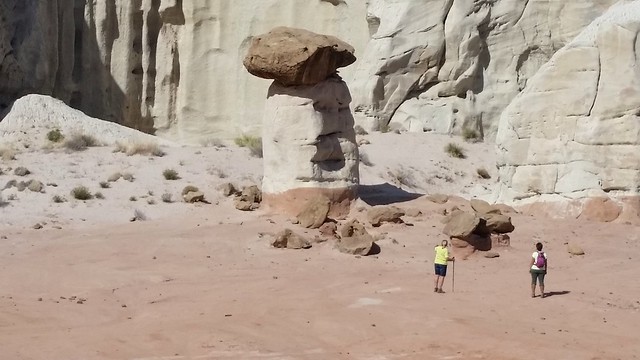 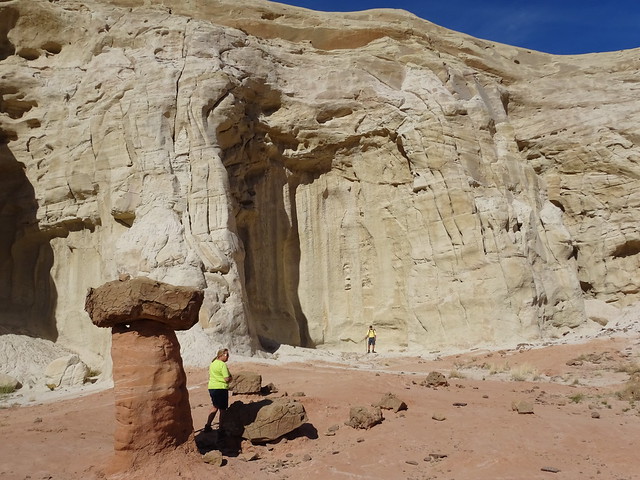 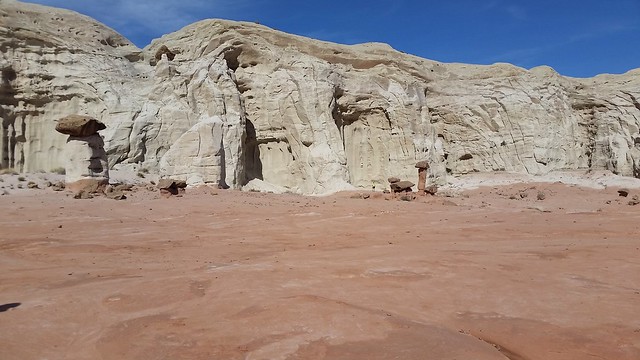 Can you see Sue in the center of the photo? 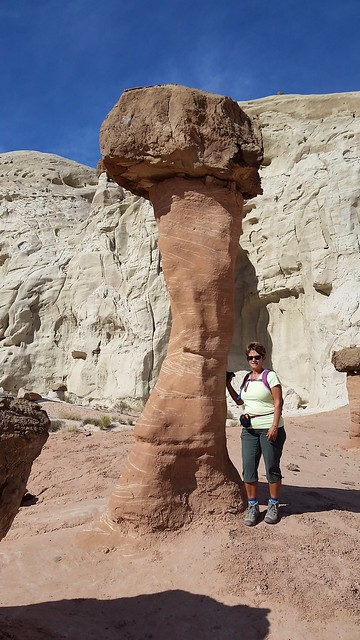 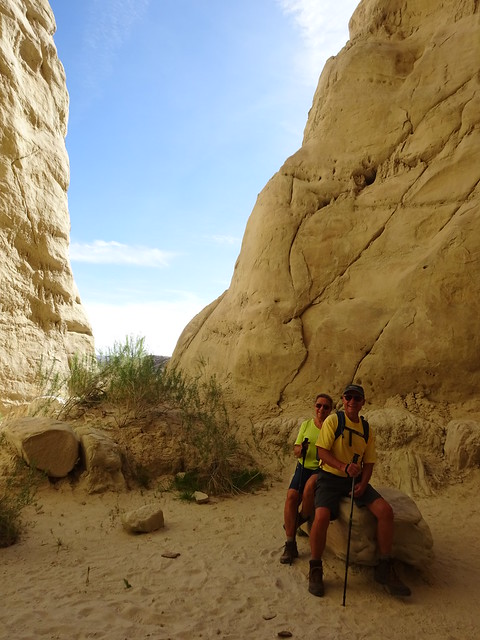 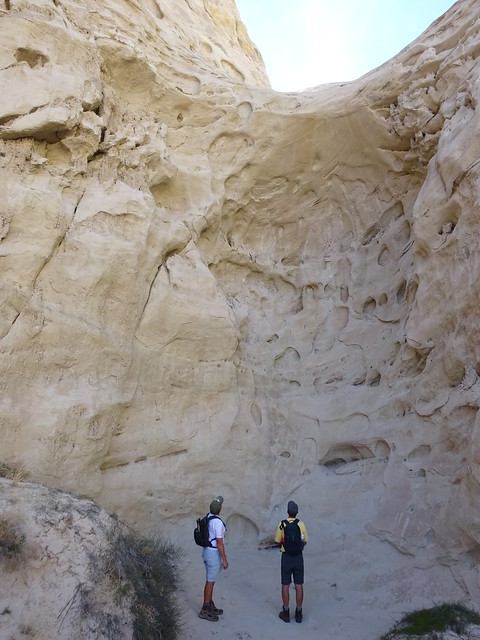 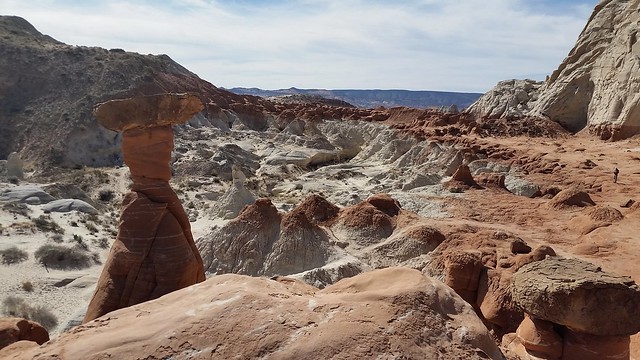 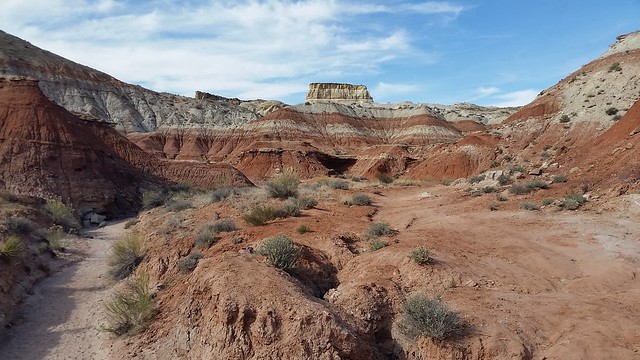 A great view on the return hike

While our expectations were not real high as we set out this morning, we were stunned by the natural beauty of both areas.  It seems that Utah is full of hidden surprises!

35 Responses to Visit to Paria and the Toadstools