For a long time we have been followers of The Bayfield Bunch blog.  Al and Kelly are from Bayfield, Ontario along the shores of Lake Huron but  during the winter they spend much of their time at a home they have in Congress.  One of their blogs described a visit to the site of an 1871 attack on a stagecoach about nine miles west of Wickenburg.  When we inquired about directions to the site, Al graciously volunteered to guide us to the spot, now located in empty desert north of Rte. 60.

Al and his trusty canine companion, Pheebe, met us one morning in the front parking area at North Ranch (Kelly was feeling a bit under the weather) and we followed them south toward Wickenburg.  About ten miles west of town on Rte. 60 we turned north on a dirt road and headed into the desert. 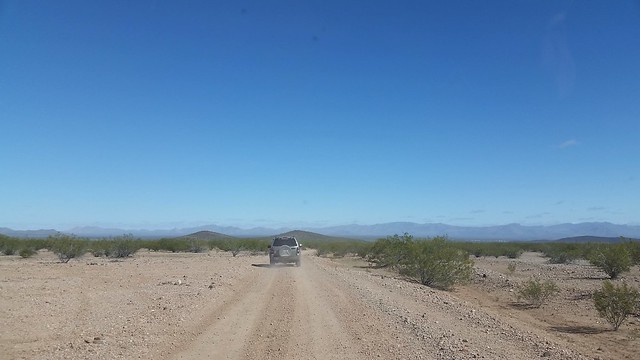 Al and Pheebs lead the way

After meandering through the desert for five or six miles we came to the ruins of an old abandoned ranch. 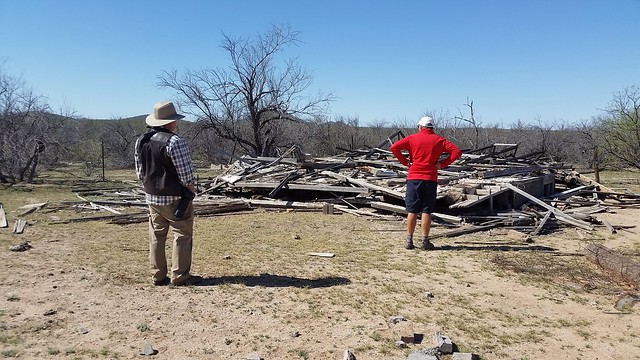 Al and John examine the remains of the ranch house 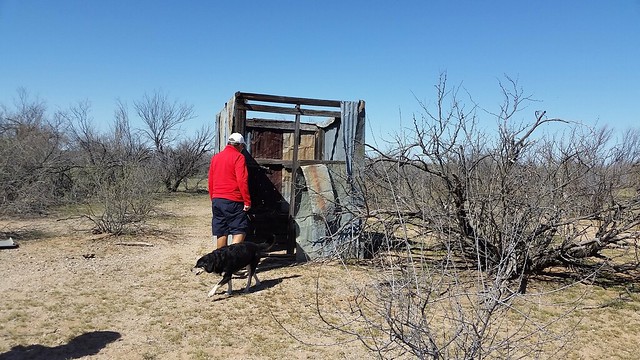 We then followed Al down the road another couple of miles to the site of the massacre.  It is not well marked so you could easily drive right by if you didn’t know what to look for. 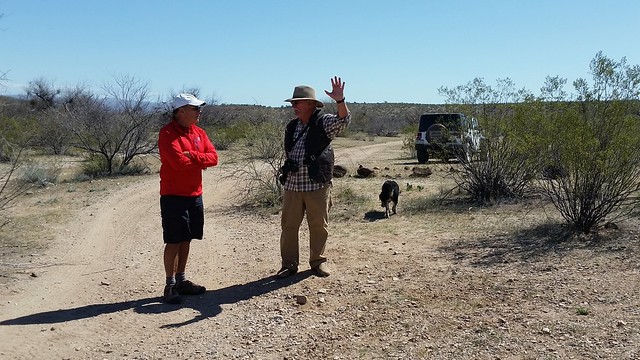 The Wickenburg Massacre occurred on November 5, 1871.  It was the mass murder of six stagecoach passengers en route from Wickenburg westbound for California.  Around mid-morning, about six miles from Wickenburg, the stagecoach was attacked by Yavapai warriors from the Date Creek Reservation.  Six men, including the driver, were shot and killed. Among them was Frederick Wadsworth Loring, a young writer from Boston who had been sent as a correspondent for a New York literary magazine.  One male passenger and the only female passenger, though wounded, managed to escape. 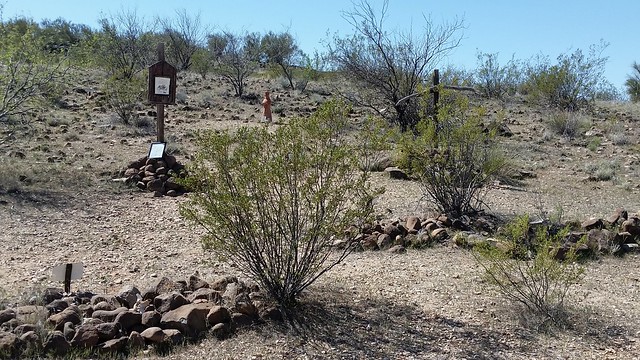 Rocks mark the locations where the dead were found

Small markers placed near the ground explain the event. 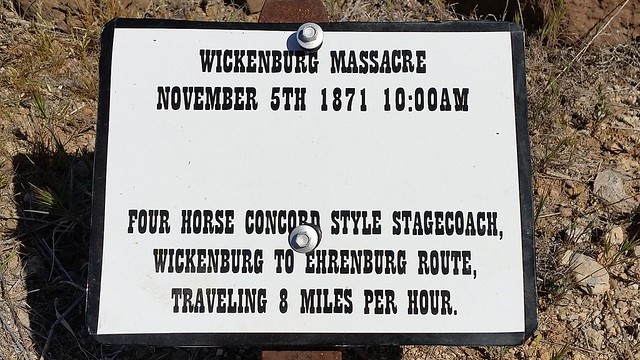 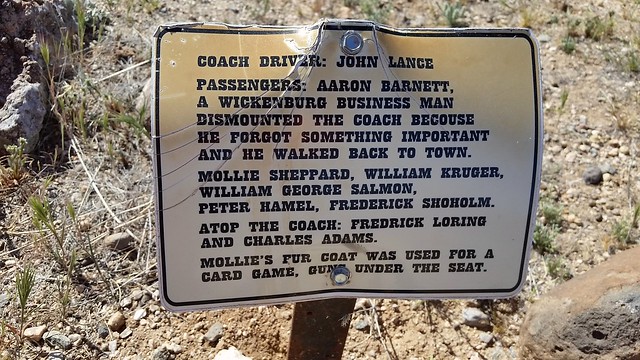 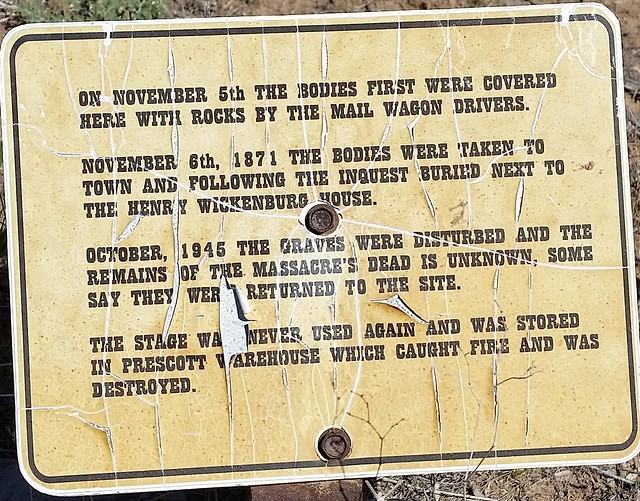 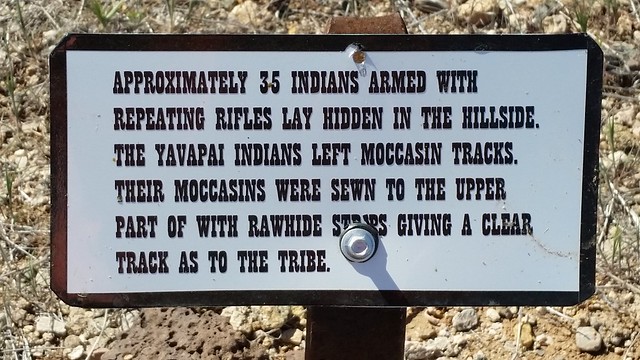 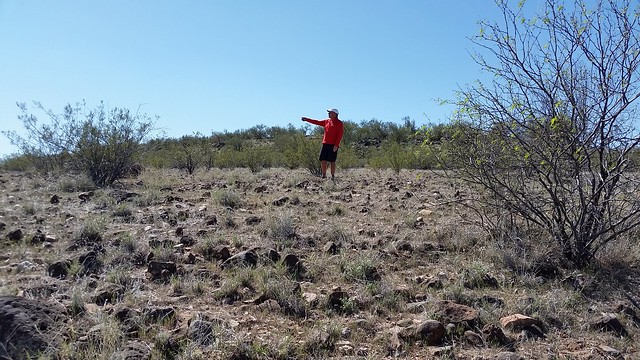 The massacre was a key event in turning public sentiment in the east against the Indians. Seven months prior to the Wickenburg incident, 144 Apaches were killed in the Camp Grant Massacre near Tucson and Eastern sentiment was with the victims.  However, the death in Wickenburg of Fredrick Loring, one of Boston’s most promising young writers, turned the tide against the Yavapai.  His untimely death created a great sensation in the East and at once the press of New York and New England turned against the Indians and concluded that ‘the Apache must be treated with less Bible, and more sword.’ 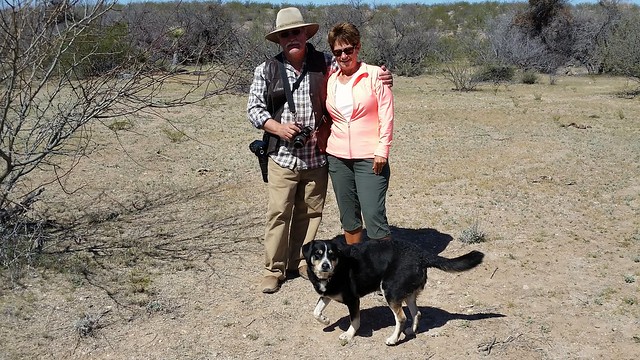 Al, Pam, and Pheebs at the site of the massacre

On the return to Wickenburg we drove six miles down a sandy wash.  The sand was very soft most of the way and the four-wheel drive was working overtime to keep us moving! 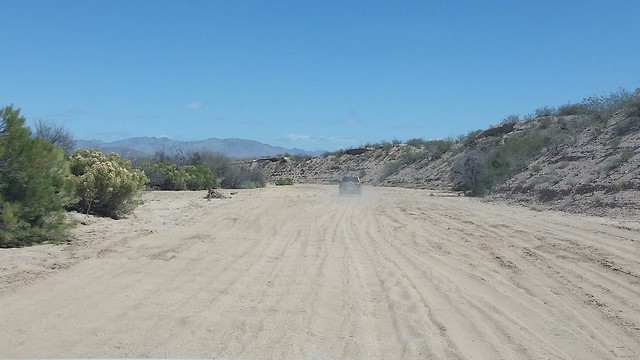 Pam asked Al for directions to another local attraction, Indian Rock, near Congress.  Again, he volunteered to guide to the location, which is only a couple miles from their house in Congress.  So back up the highway we went for the 15 mile drive from Wickenburg to Congress.  Then we drove another couple miles on a dirt road through the desert to our destination, a huge boulder sitting at the base of a rock strewn hillside. 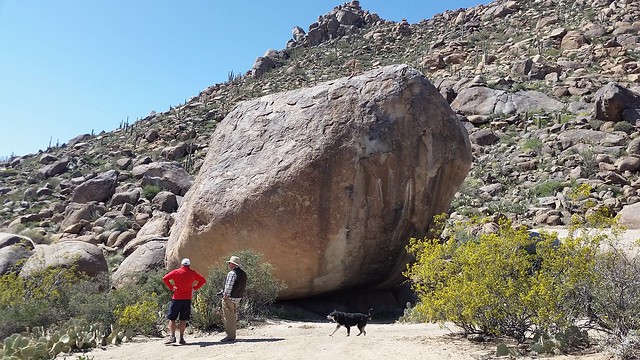 The rock was definitely used by ancient people as there is art work on one side and numerous morteros used to grind grain. 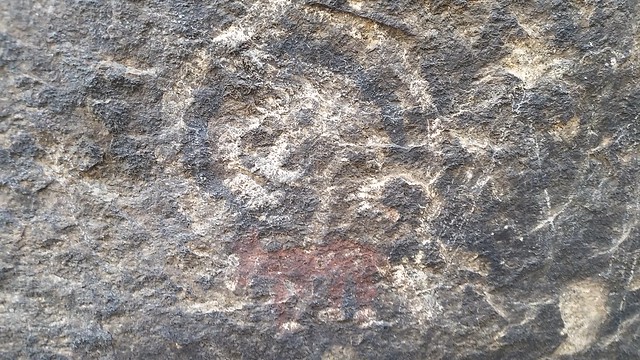 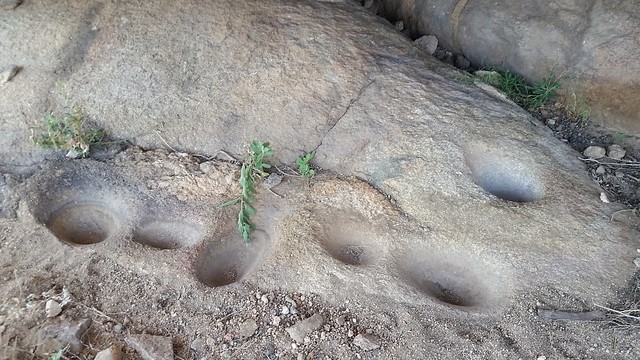 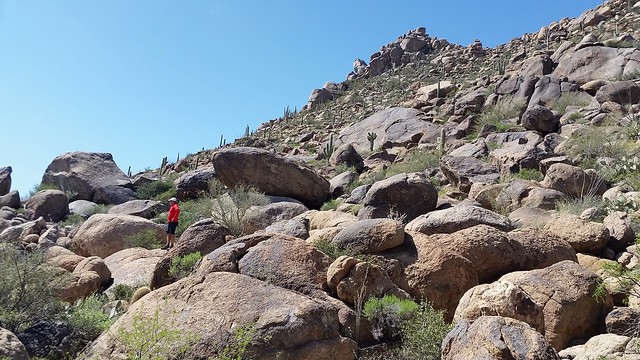 Can you spot the observer in red? 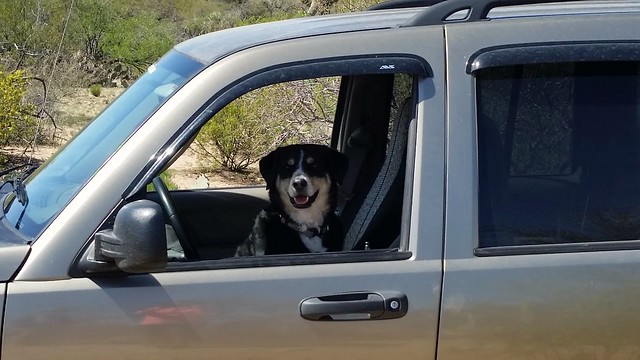 The driver waits patiently for her passenger

Following our tours we stopped at Al and Kelly’s home.  After meeting Kelly she took us for a tour of their house, then Al showed us around all the cacti he has planted around the yard.  By the way, the home is for sale if you’re looking for a great place to spend the winter!

Thank you Al (and Pheebs) for a great day.  We really appreciated your hospitality!

22 Responses to The Wickenburg Massacre Site