Posted on February 2, 2016 by placestheygo

We have found that we really enjoy staying in the Tucson area, as there is much to do and see.  If you like to hike, this area is teeming with great trails.  Steve and MonaLiza (The Lowes RV Adventures) are also staying in the same park (Lazydays KOA) and recently joined us on one of those trails, a hike to the top of Wasson Peak, in the nearby Tucson Mountains. 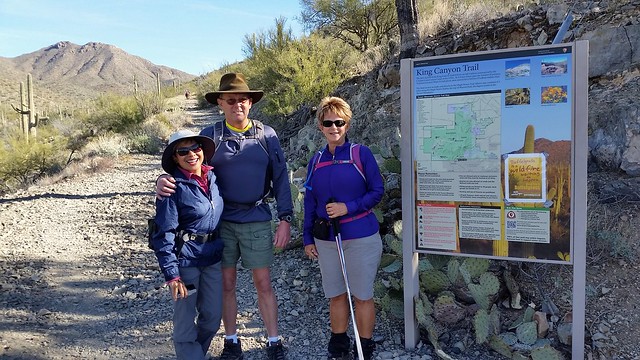 This was our third time hiking up this trail, but we enjoy it and were anxious to share it with Steve and MonaLisa. 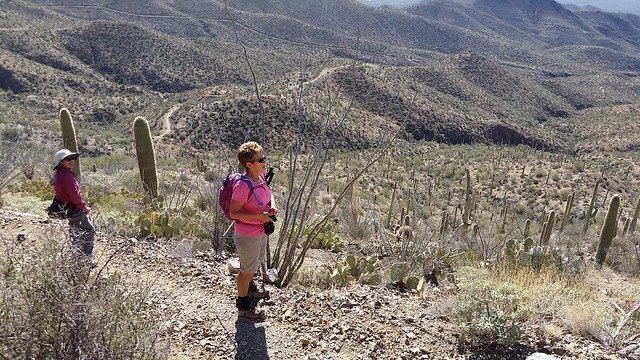 One hiker has an eye out for birds, the other is looking for crested saguaros 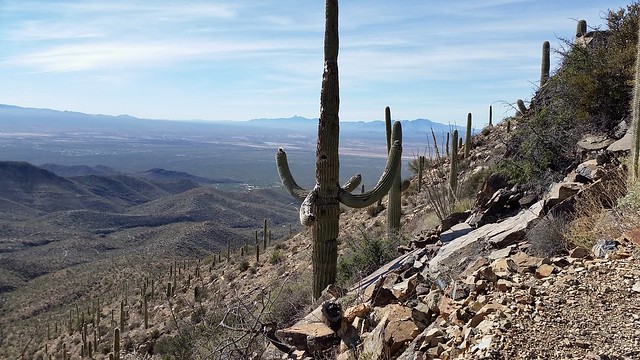 Looking west along the trail 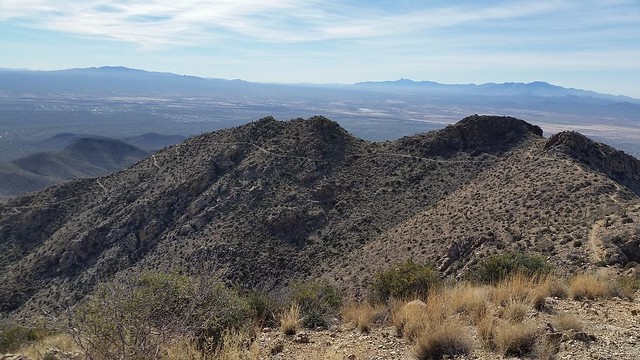 Looking back at the trail from near the top 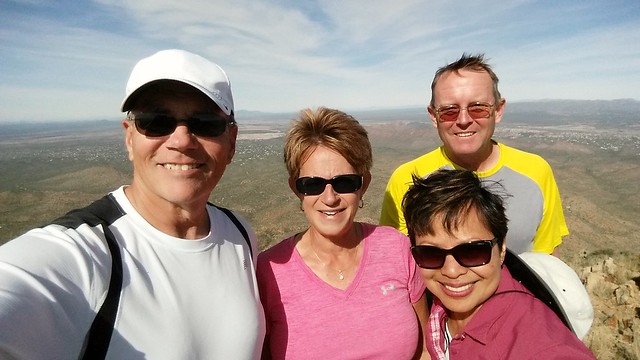 Enjoying the view from the peak 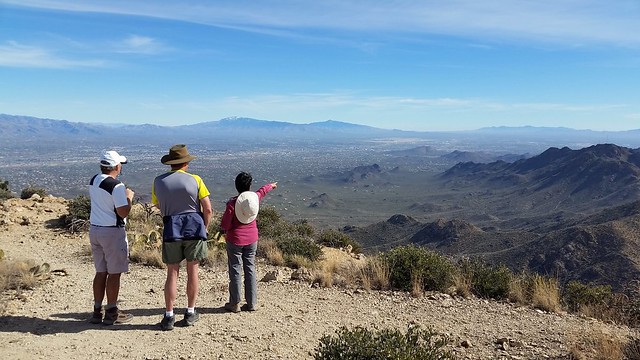 Our tour guide points out locations in Tucson

We took the King’s Canyon Trail and Sweetwater Trail up the mountain, then hiked the Norris Trail, Esperanza Trail,  and Gould Mine Trail back down. 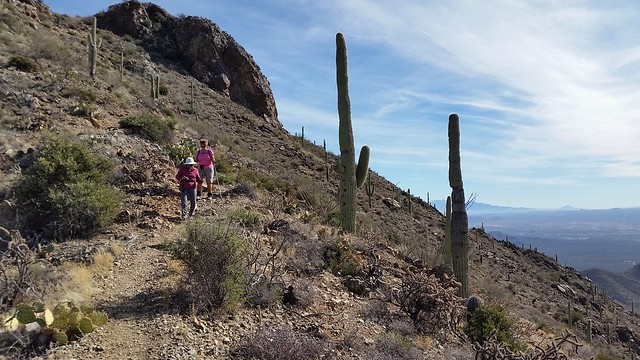 Heading down the Norris Trail

Along the Esperanza Trail Steve’s sharp eyes spotted a nice crested saguaro on a hillside above us. 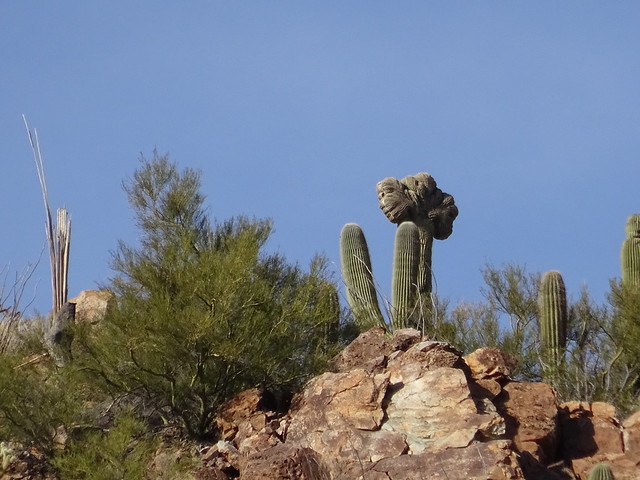 After completing the hike we drove into Tucson and met Dave and Sue for a great meal at El Charro, one of the oldest Mexican restaurants in the area. 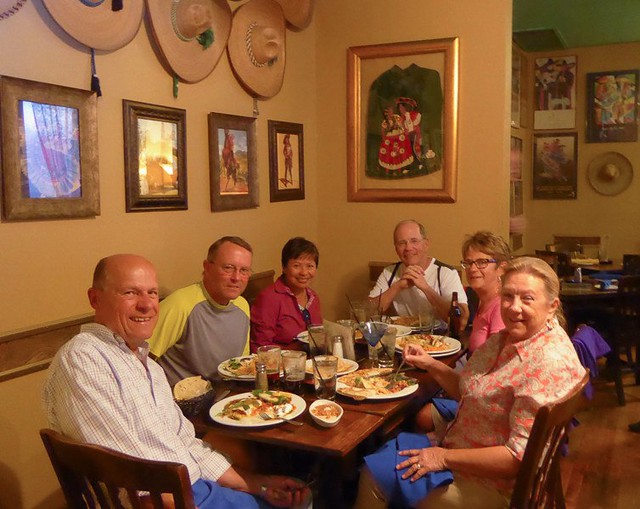 One evening while Dave and Sue were staying in the KOA we invited their dog, Lewis, over for an evening of chasing a ball around our motorhome.  Since he couldn’t find our site by himself we invited Dave and Sue to tag along and share a spaghetti dinner (one of Dave’s favorites) with us.  Apparently Lewis has a “thing” about throw rugs as he enjoyed creating a pile with the one in our living area! 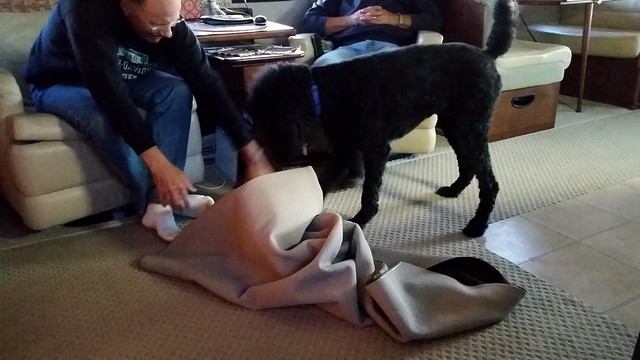 Where did the ball go?  If I had thumbs maybe I could find it!

One warm afternoon we took a break from the hiking trail and road some of the great bike trails that weave through and around Tucson. 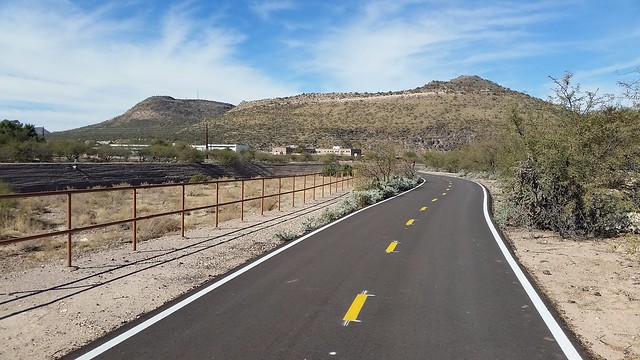 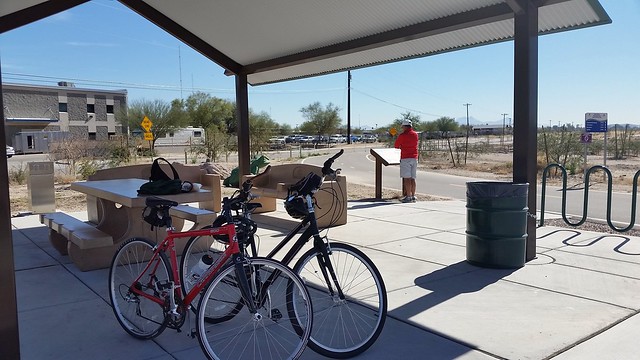 A nice covered picnic area along the trail

The Santa Cruz River is dry most of the time.  As we rode along side of it on the bike trail, a rider and horse came down the river bed at a fast pace. 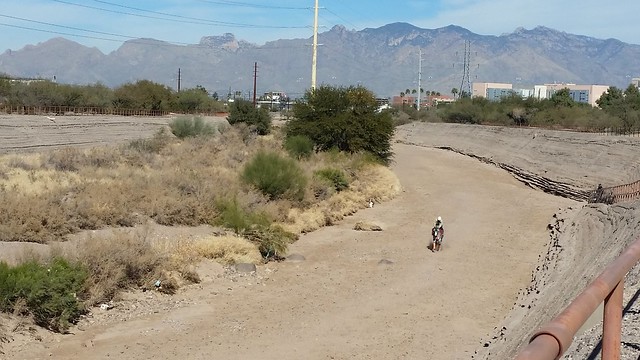 As they came up next to us they stopped, turned, and headed back up the river bed. 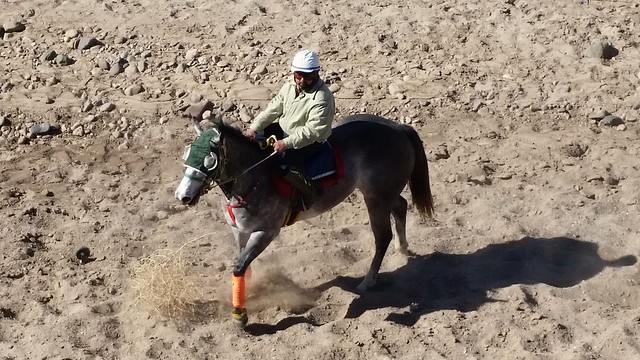 We rode through downtown Tucson we found our way to the Aviation Bikeway.  The trail crosses over Broadway (one of the main streets in the city) by way of the Rattlesnake Bridge.  The north side of the bridge forms the mouth of a rattlesnake . . . 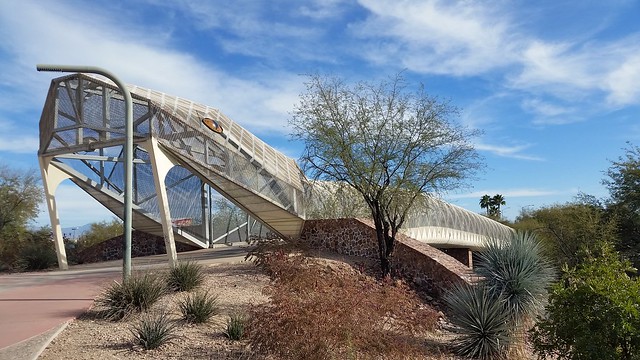 . . . while the south side forms the tail rattler of the snake. 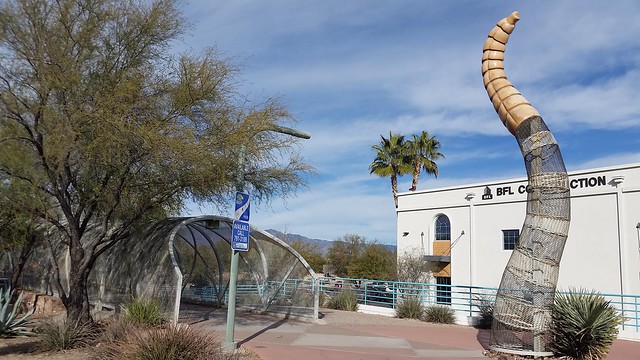 Earlier in the week Dave and Sue moved from the KOA to Catalina State Park, located north of Tucson in Oro Valley.  The next day friends, Jodee and Bill (On the Road Abode), stopped at the same park for a two day stay.  We took advantage of their visit to have an afternoon get together at their site.  Steve and Mona Lisa joined the group as did friends of Dave and Sue.  Walter and Cindy P lived down the street from them for many years in Geneseo, NY.  This year they are in Arizona traveling with daughter Geneva in their fifth wheel for the winter. 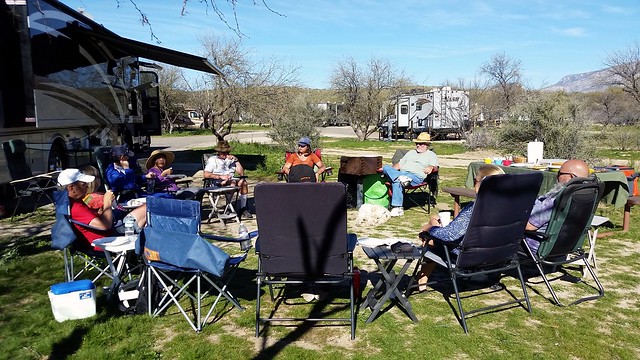 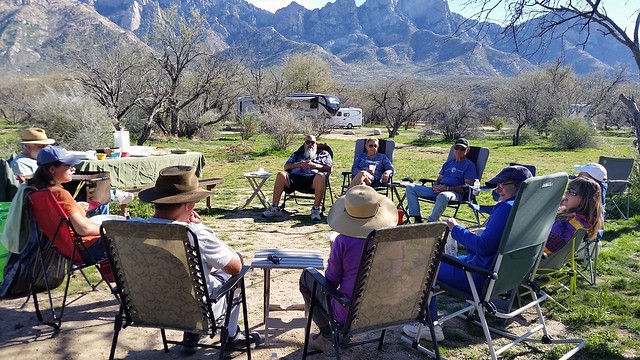 Catalina State Park is a beautiful place nestled up against the Catalina Mountains.  The campsites are large and most have electric and water.  But the best part of the park is the view of the mountains. 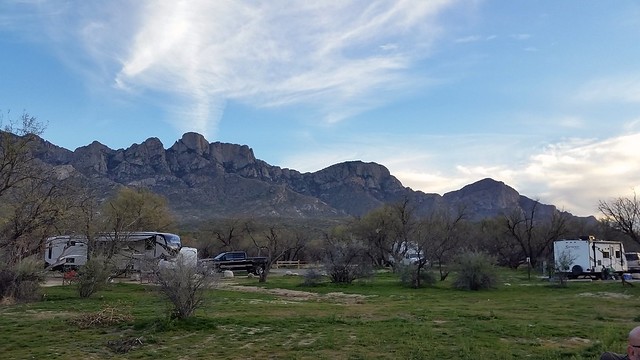 Late last week we received a message from friends Hector and Brenda (Island Girl Walkabout) that they were coming to Tucson for a brief visit.  We had not seen them since there returned from a fantastic trip to Alaska last summer so we were anxious to see them and hear all about their adventure.  Brenda had heard that El Charro was a good restaurant and suggested we meet there.  Of course, we had just been there last week but we love the place so were very willing to go there again.  Steve and MonaLisa are also friends with them so they joined the group.

Does this place look familiar?

The scene in the photo above might look a bit familiar.  Yes, it is the same table we sat at last week.  We first ate at El Charro three years ago while in town for a Discovery RV National Rally.  We were part of a group of six and, you guessed it, we sat at the same table!

45 Responses to Enjoying Friends, Hikes, and Bikes in Tucson