Posted on January 3, 2016 by placestheygo

As she has each year since we began full-timing, our daughter, Jessica, flew out Christmas Day for a visit.  This year she was coming to Arizona.   A flight from Baltimore to Tucson would require changing planes in either Chicago or Minneapolis.  Since we didn’t want to risk stopping where winter weather was possible, we had her take a direct flight to Phoenix and we drove up to get her.  With all the flight delays that occurred over the holidays in those cities, that turned out to be a good move. 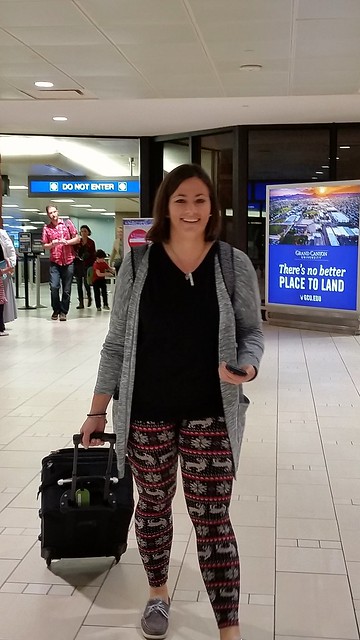 On the drive back to Tucson we stopped in nearby Chandler and had Christmas dinner in a nice Irish Pub called Murphy’s Law. 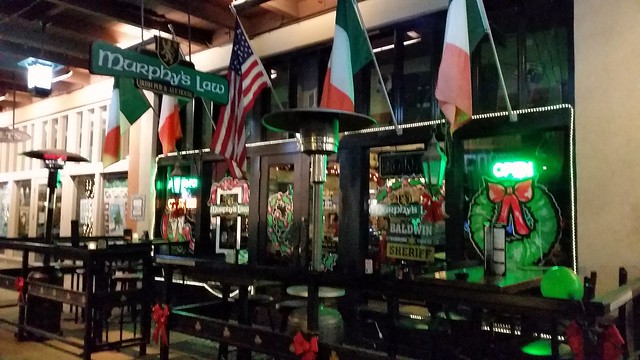 The restaurant is in a commercial area surrounding a small park decorated with holiday lights.  The centerpiece of the display was a Christmas tree made out of tumbleweeds, a Chandler tradition. 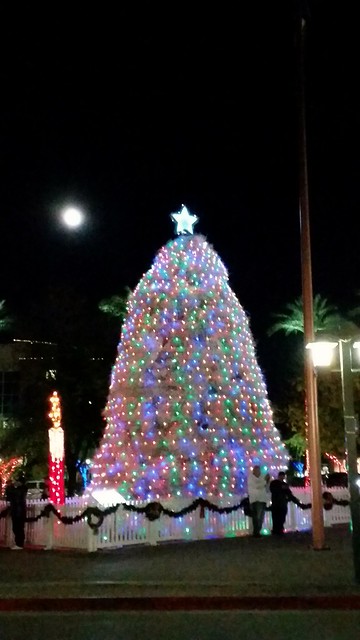 While Tucson is at about 2,700 feet of elevation, Mount Lemmon, at 9,000 feet, sits just north of the city.  At the top of the mountain is a small ski resort.  With all the warm weather back in Pennsylvania, we decided to give Jessica a taste of winter and drove up to the ski area.  We took the Catalina Highway, which winds for over 25 miles up to the top of the mountain.  While it was a bit cool in the city (mid-40s), the temperature dropped steadily as we gained elevation.  Soon we left the sunshine of Tucson and went into the clouds covering the mountain.  That’s when the little white flakes began to blow around us! 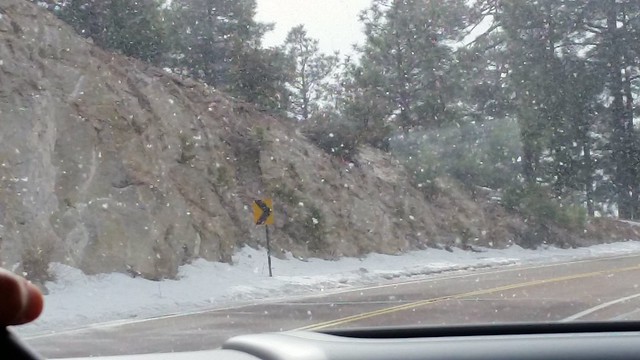 The temperature at the top was much too cold for us.  Eighteen degrees! 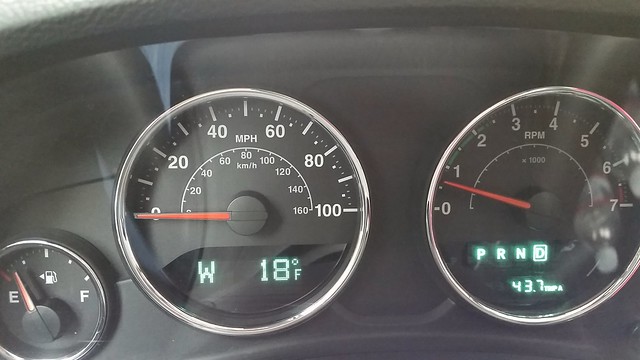 It was the first significant snow of the season on the mountain and there was not enough to open the ski slopes, but a crowd of people were enjoying the snowfall and riding the chairlift. 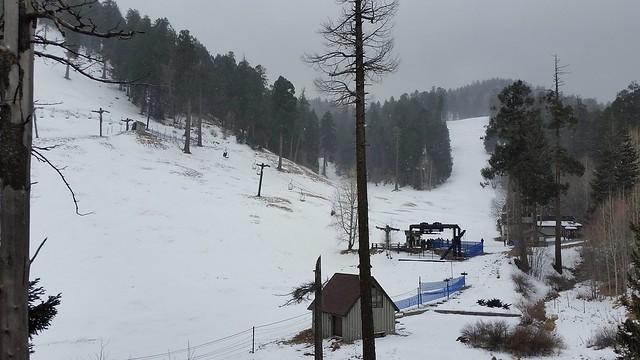 The next day we drove over to nearby Tucson Mountain Park for some hiking.  After parking at the 36th Street trailhead we set out  for a hike that combined the 36th Street Trail, the Starr Pass Trail, and the Yetman Trail. 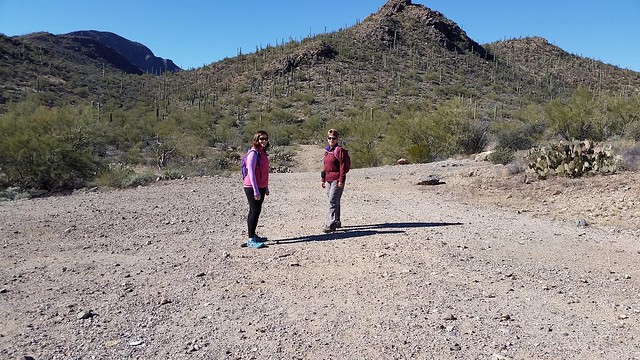 The experienced hiking planner in our group described a nice six mile hike but apparently there was a calculation error, as the hike turned out to be just over nine miles!  But the planner was very happy as we saw a number of Crested Saguaros along the route. 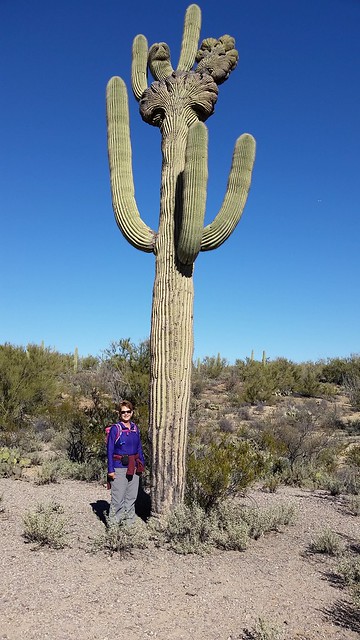 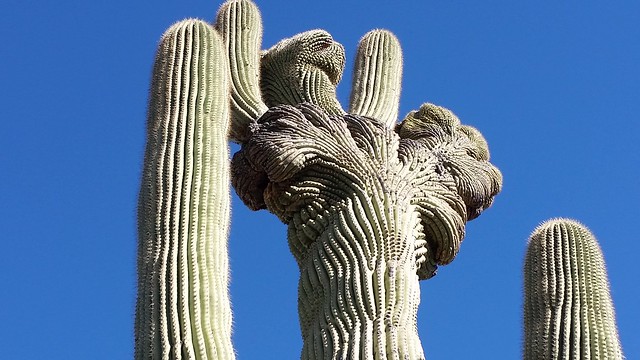 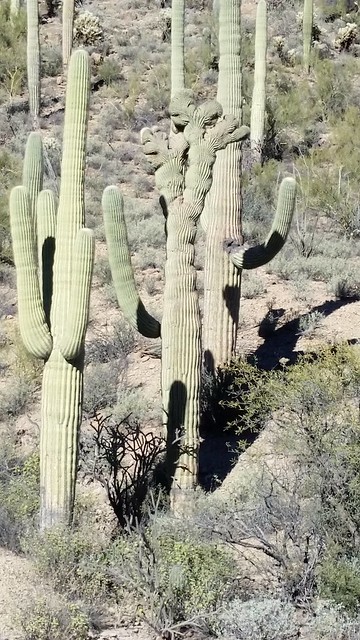 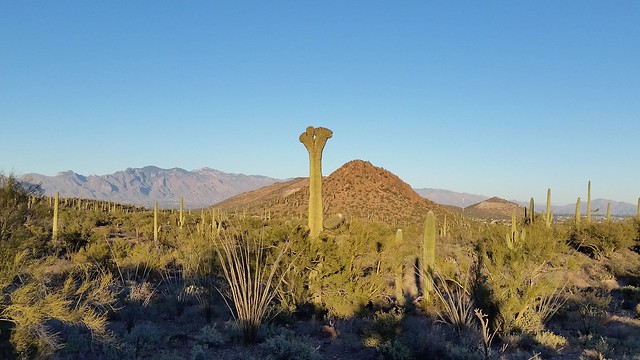 The next day we drove northeast of Tucson to Catalina State Park for a hike up the Romero Canyon Trail which goes up Montrose Canyon to the Romero Pools.  This hike (5.5 miles round trip) starts off on a nice, wide, flat trail but soon narrows and becomes rough as it goes steeply up the canyon. 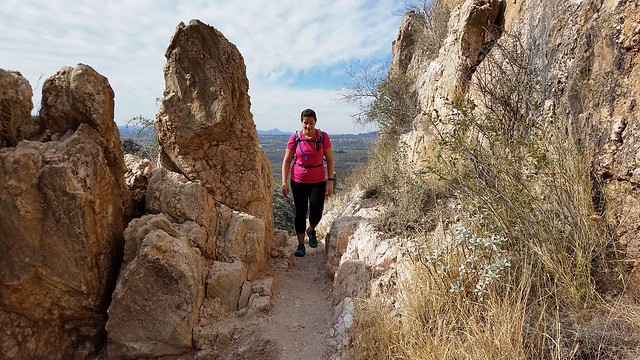 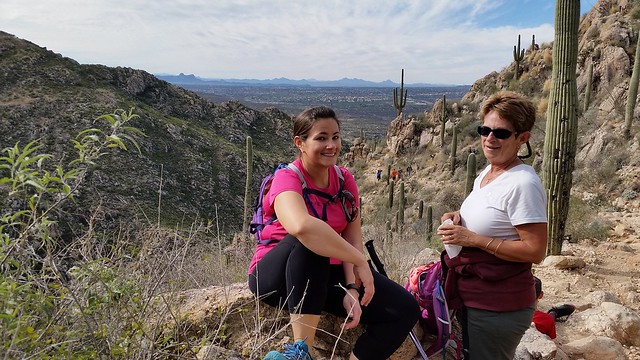 We arrived at the Romero Pools to find a large number of people enjoying the area.  But we found a nice spot on the rocks high above the pools away from the crowd and enjoyed lunch. 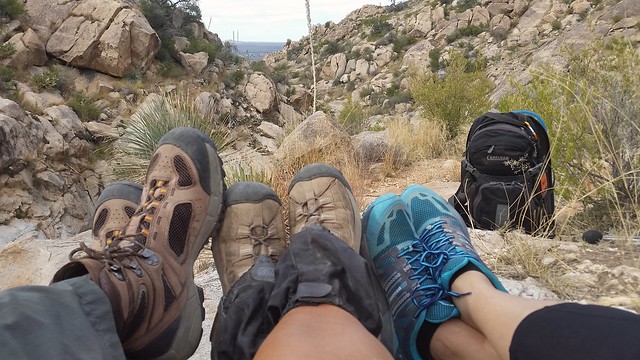 Lunch with (a bit of) a view 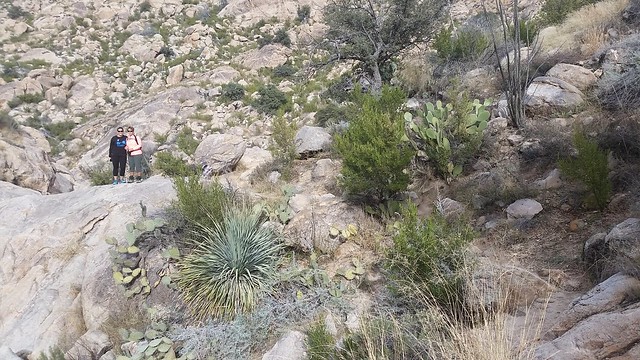 Beauty among the rocks 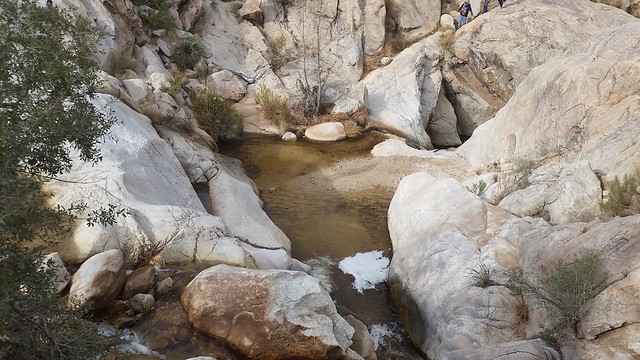 One of the numerous Romero Pools 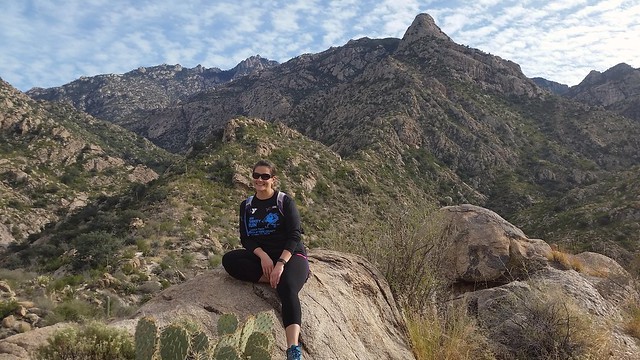 Jessica with the Catalina Mountains in the background 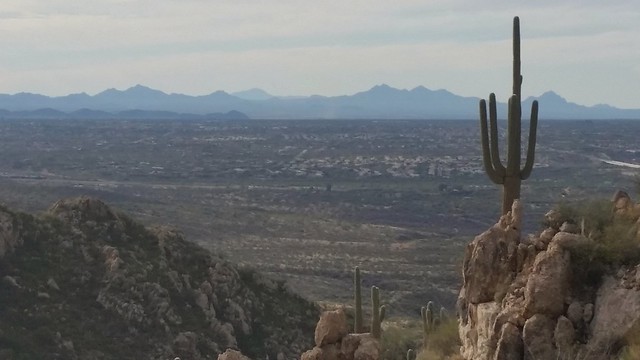 A view of the Oro Valley along the trail 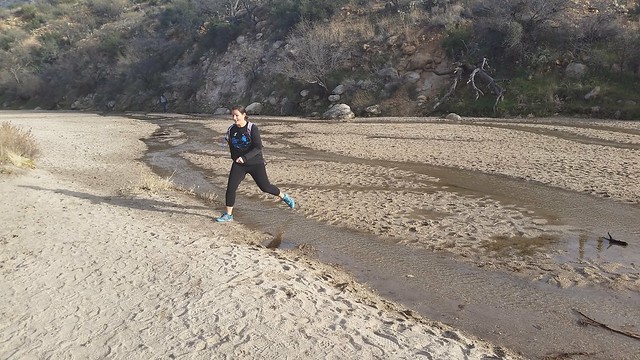 Crossing the stream at the end of the trail

After a great four day visit we drove Jessica back to Phoenix for her return trip back to Pennsylvania.  We had planned to leave Tucson on Sunday and join Dave and Sue in Naco, AZ near Bisbee, but the weather prediction is for chilly temperatures and rain for most of the week.  So we’ve decided to delay our visit to Naco and stay put for a few more days here in Tucson.

35 Responses to Holiday Hiking in Tucson