Casa Grande Ruins and the Peak

Since our last post we have traveled from Borrego Springs in southern California into south central Arizona.  Like most full-time RVers we don’t like to drive too far in one day, so the first leg of our journey was only about 130 miles to Yuma, where we stopped for a night.  The next day’s drive was about 180 miles to Casa Grande, AZ where we had a reservation for four nights at the Casa Grande RV Resort.

We spent most of our time in Casa Grande cleaning the motorhome inside and out and visiting the grocery store.  But one day we drove 20 miles east to the town of Coolidge for a visit to the Casa Grande Ruins National Monument. 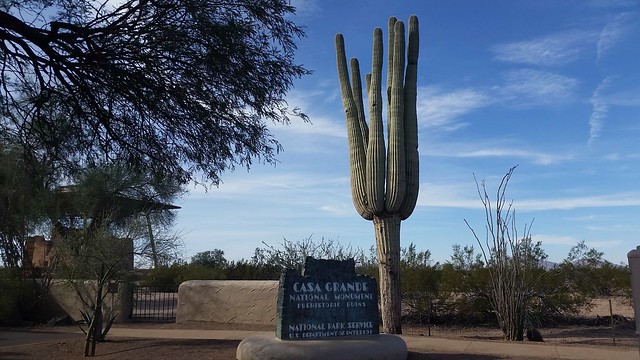 As we entered the visitor center the ranger on duty said that a guided tour was just starting out in the Interpretive Ramada, so we quickly made our way there and joined the group. 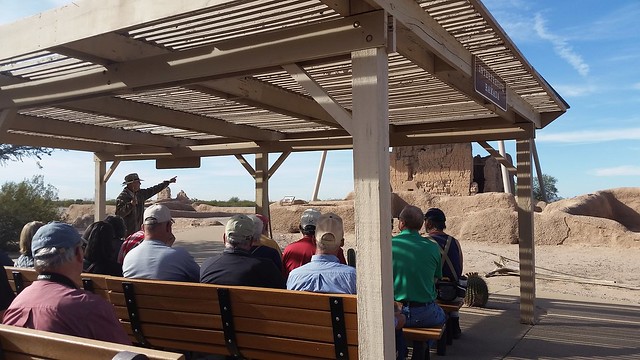 The national monument consists of the ruins of multiple structures surrounded by a compound wall constructed by the ancient people of the Hohokam period, who farmed the Gila Valley in the early 13th century.  “Casa Grande” is Spanish for “big house” and refers to the largest structure on the site, which is what remains of a four story structure that was abandoned by the time European explorers visited the area in 1450. 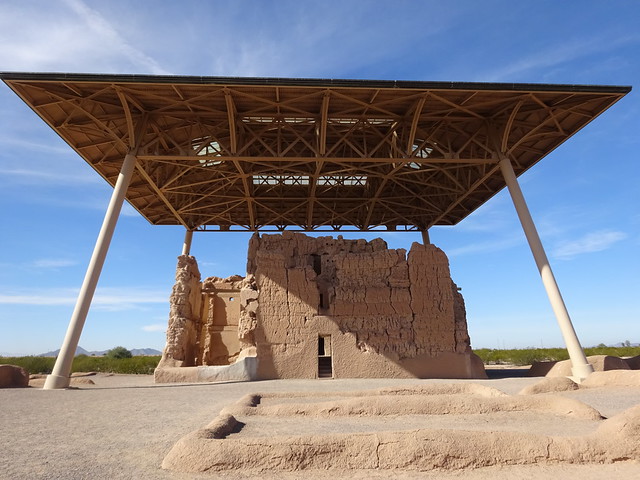 In 1902, a Ramada was built to shelter the ruins from weathering.  In 1932 that cover was replaced by a more open one seen in the photo above.  An interesting (to some people) note is that the structure was designed by Boston architect Frederick Law Olmsted, Jr., the son of Frederick Law Olmsted, the landscape architect most famous for the design of Central Park in New York City.

In the last few years three Great Horned Owls have taken up residency in the rafters of the Ramada.  We could see them sleeping just over our heads. 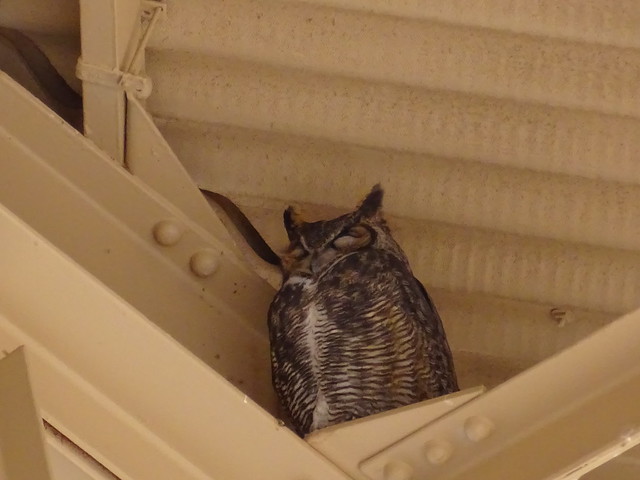 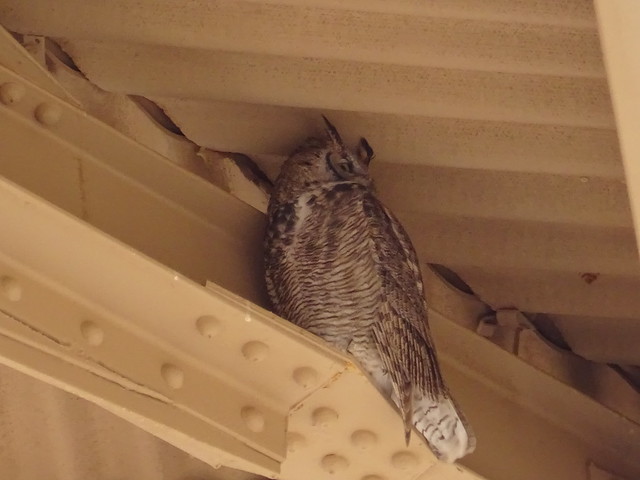 Following our stay in Casa Grande we headed south just 30 miles on I-10 to Picacho Peak State Park.  The park sits about mid-way between Tucson and Phoenix  and surrounds a prominent 1,500 foot peak.  We stayed in the park last March intending to hike the peak, but a sore leg hobbled the nimble hiker and prevented her from hiking.  But now we are back, healthy and ready to conquer the peak! 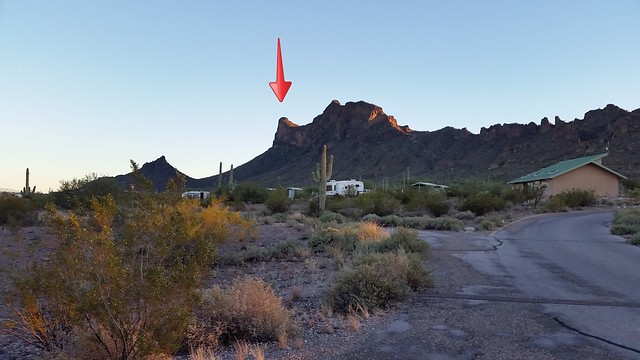 The Peak looking from our site in the campground

There are two trails that go up toward the peak.  We decided to take the Sunset Vista Trail up, then return on the Hunter Trail.  The Sunset Vista Trail is just over three miles long and begins at the northern edge of the park, a mile walk from our site in the campground. 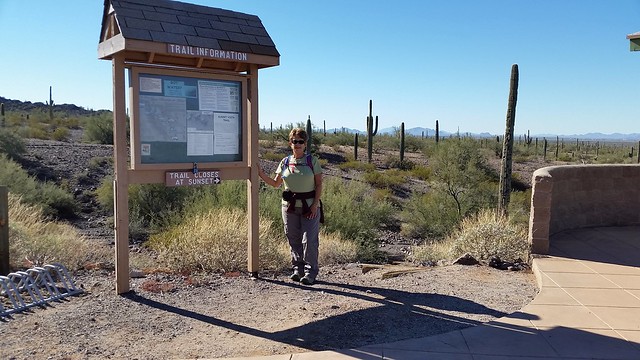 Once we walked to the trailhead and got on the trail, we climbed up the west side of the peak through a desert filled with Saguaros. 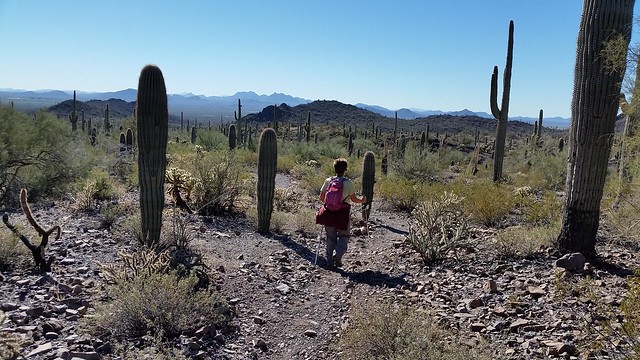 We hiked around a hillside as Picacho Peak came into view. 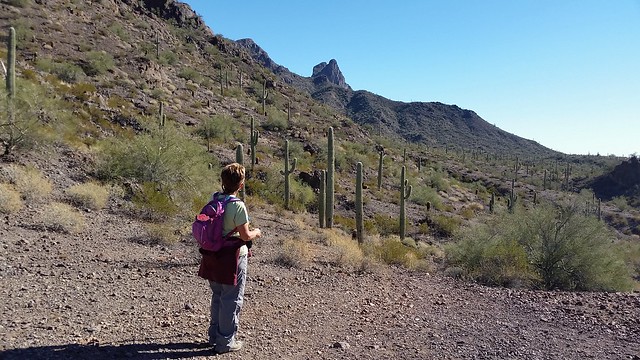 Are you sure you want to do this?

As we got nearer to the approach to the peak the trail began gaining elevation and became very rough. 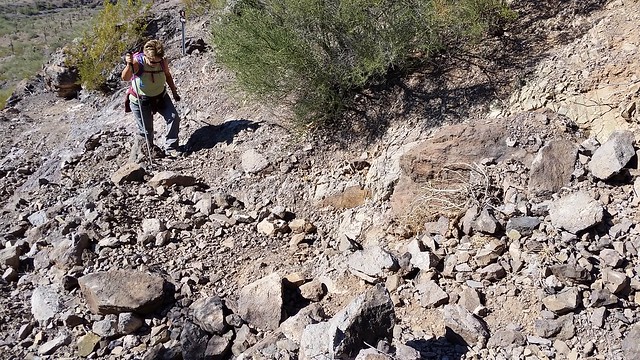 Arriving at the base of the peak we came to our first obstacle, a wall of rock about thirty feet high going almost straight up!  Cables running up the rock were needed to make the climb possible. 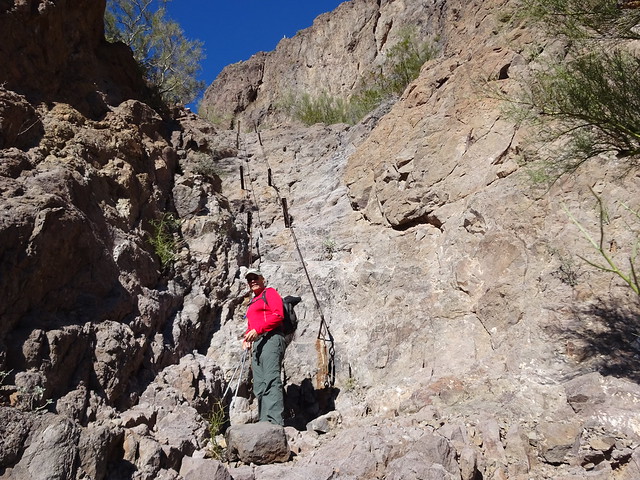 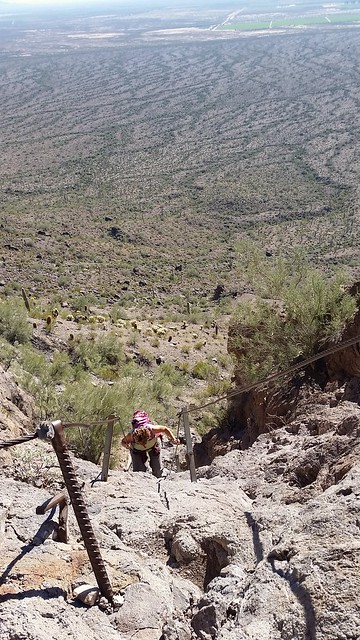 Once up that challenge we came to the junction of the two trails. 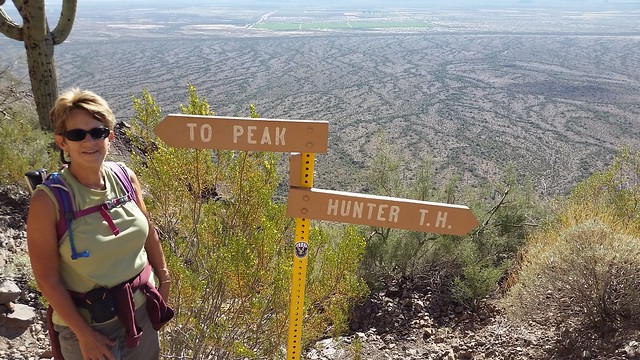 We turned to the south, anxious about the challenge ahead of us.  The trail began a climb sharply up the rock, made climbable (is that a word?) by more cables attached to supports drilled into the rock. 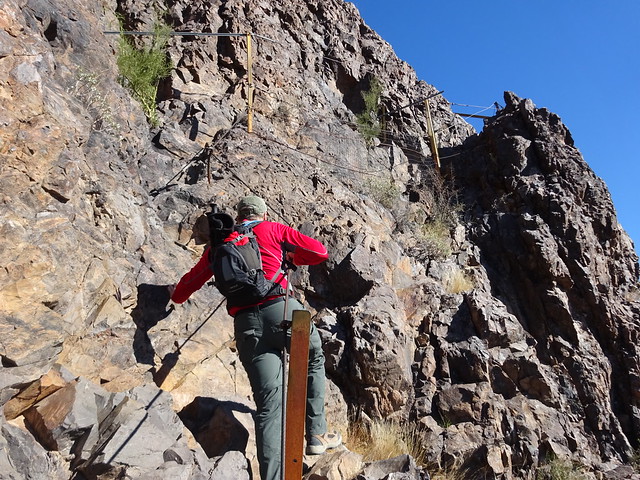 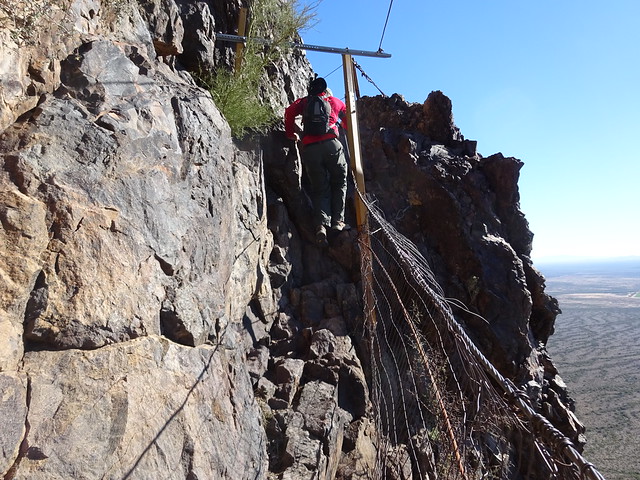 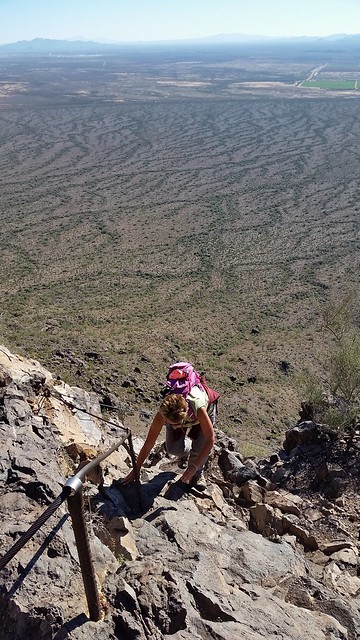 The use of gloves is recommended for this climb.  We brought gloves with us but found that they slipped on the cable, so they went back into our packs.   We found the cables to be very smooth and were able to use them with our bare hands with no problem.  We suspect that the cables may have been replaced recently as they were in great shape. 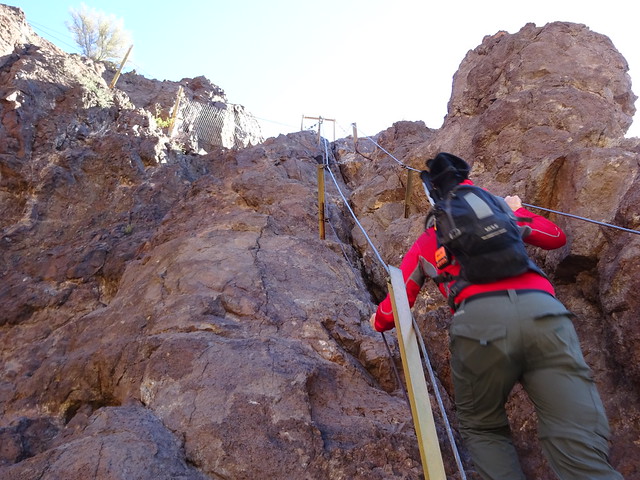 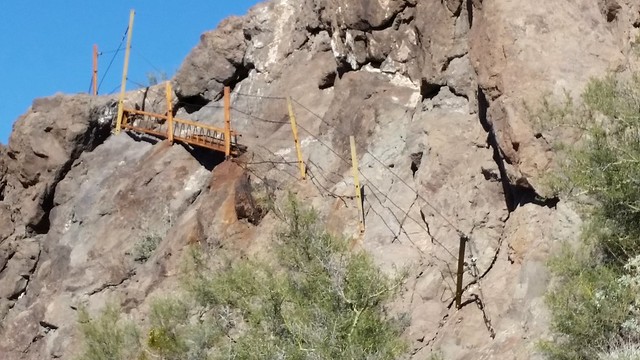 A very narrow”bridge” helped climbers over the last steep section 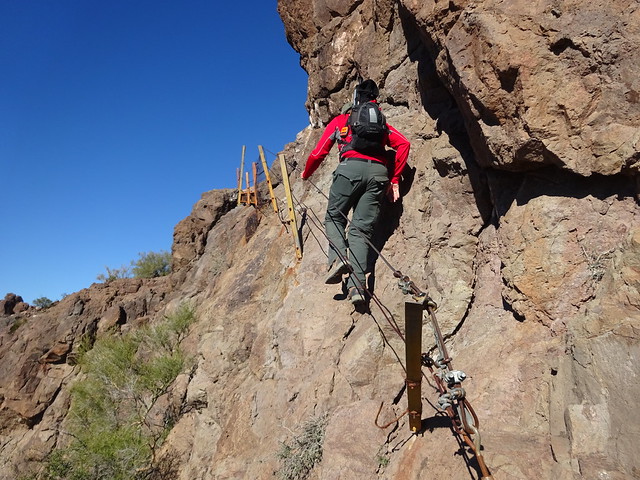 Once at the top we were treated to a 360 degree view of the desert around us. 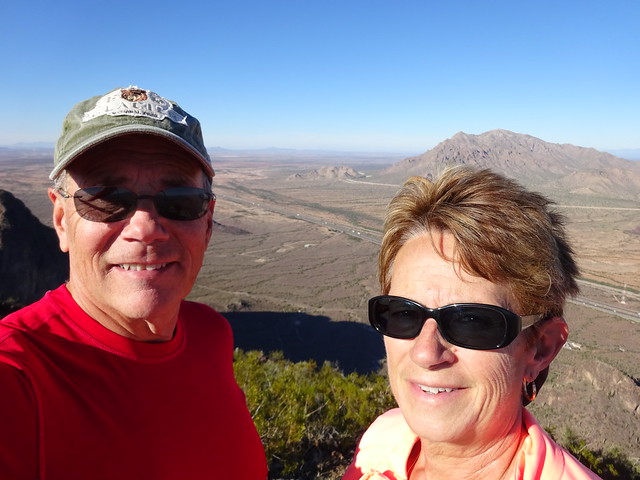 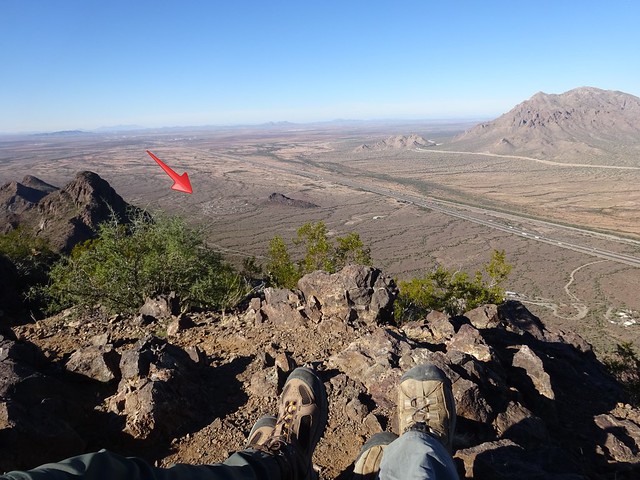 “Lunch with a view” (the arrow marks our RV site) 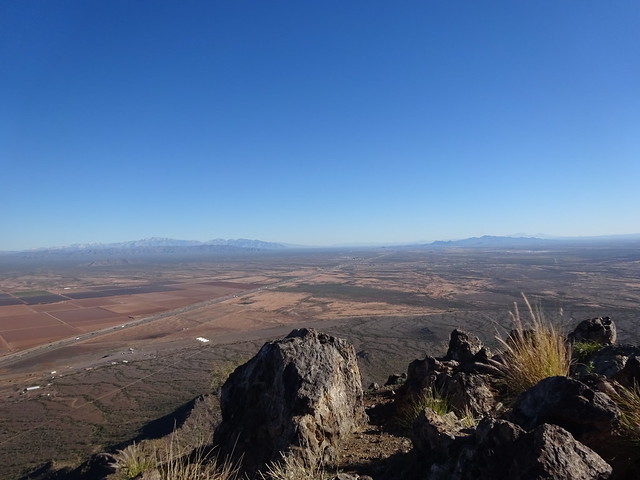 The view to the south (Tucson was visible with binoculars)

The hike up was a real challenge, so the trip back down promised to be equally exciting! 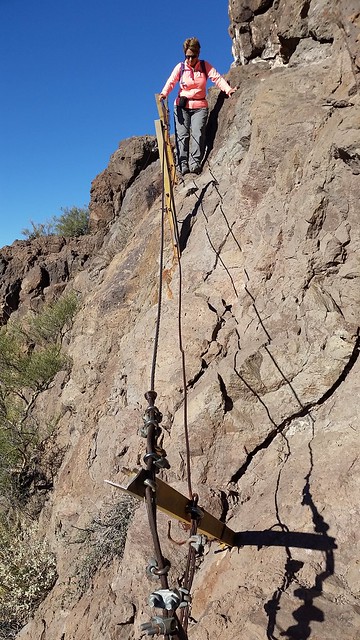 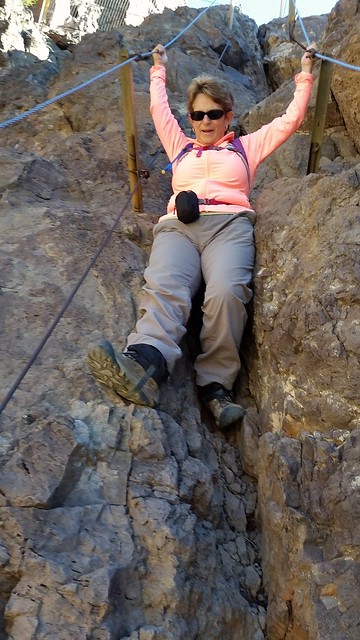 A technique not found in the hiking books!

We returned on the Hunter Trail, which is much shorter that the Sunset Vista Trail.  But, while shorter, the trail goes steeply down the face of the mountain and is very rough. 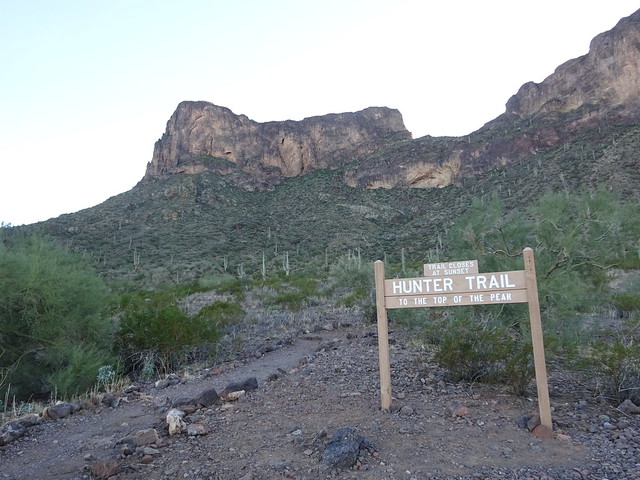 Once finally down to the road we had a walk of over a mile to our motorhome.  Wow, this was one very challenging, heart stopping seven mile hike!

Late one afternoon during our stay here a brief, light shower occurred while the sun was breaking through the clouds.  That combination formed a beautiful rainbow just to our south. 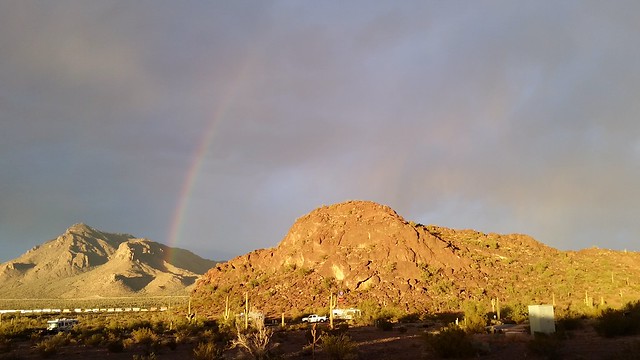 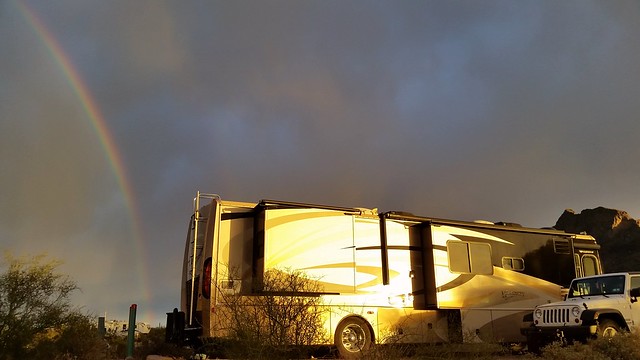 Dave and Sue were also in the park at a site near us and one afternoon they invited us to share happy hour at their site.  While enjoying some good conversation, we were treated to a great show as the sun set over the hills.  As it went down in the west, it lit up the mountains to the east. 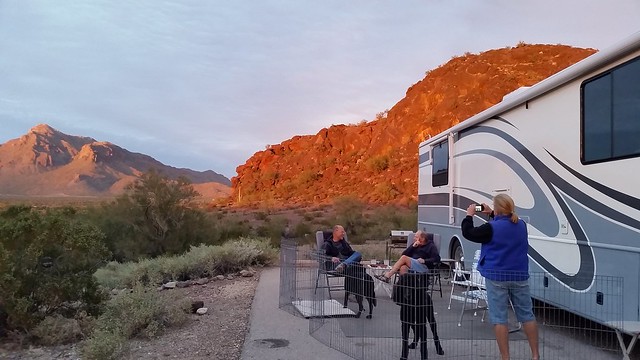 Then the sky to the west lit up in beautiful colors! 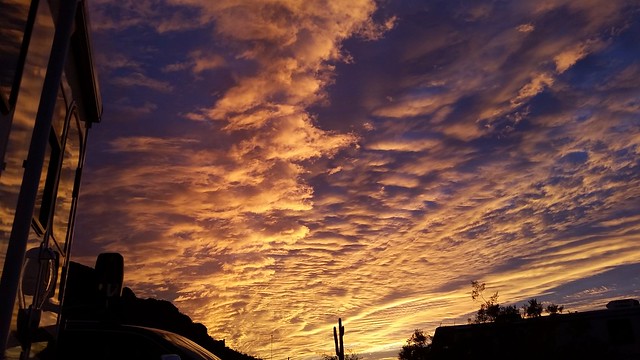 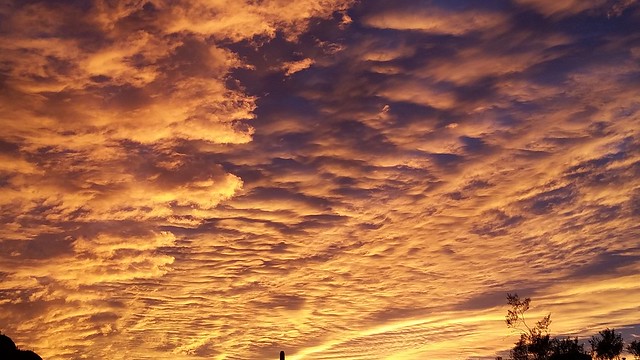 Tomorrow we continue our journey south to Tucson where we will spend the holidays at Lazydays KOA.

71 Responses to Casa Grande Ruins and the Peak