On to the Coachella Valley and Joshua Tree Nat. Park

Posted on November 7, 2015 by placestheygo

On Tuesday we pulled out of Boulder Creek RV Park in Lone Pine just ahead of Dave and Sue (Beluga’s Excellent Adventure) and headed south on US-395.  As we headed down the road the clouds to the west formed the most unusual “white blanket” on the Sierra Nevada Mountains. 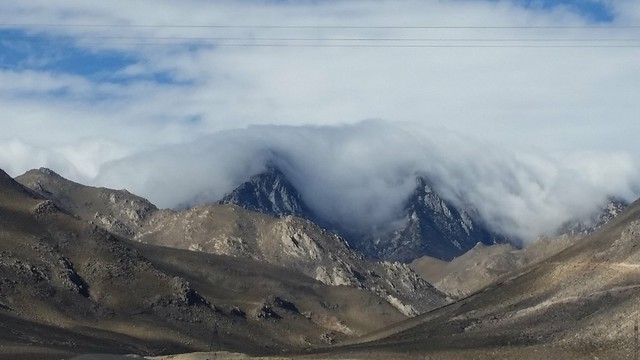 After a pleasant, uneventful trip of about 250 miles we entered the land of the windmills, also known as the Coachella Valley. 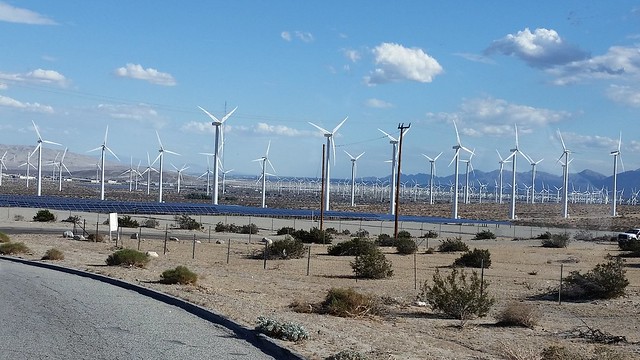 Just north of Palm Springs we turned east for about ten miles to our destination, Sam’s Family Hot Water Spa Resort.  We pulled into the parking area and waited for Dave and Sue to arrive.  This park lets you pick out your site before you register and, since Dave and Sue have stayed here before, they had an area that they preferred.  They pulled in just a few minutes later and, after experiencing some difficulty getting level, we were soon set up in adjacent sites. 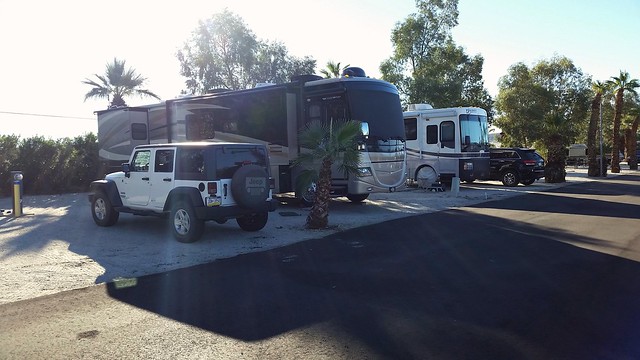 As the name says, this park has a series of pools that are partially enclosed and naturally heated by hot mineral water pumped from three underground wells constantly flowing through the pools. 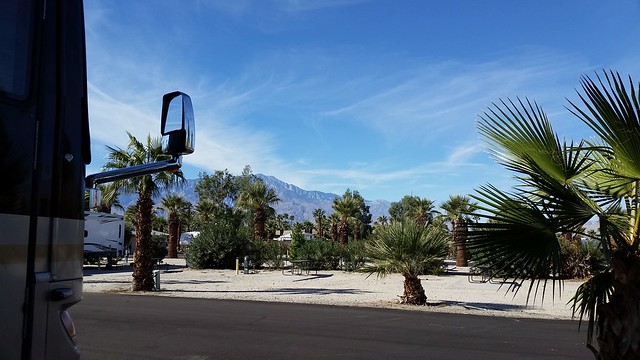 Beautiful mountain views in all directions

The following day the wind howled all day long so we just spent some time visiting grocery stores in the area to re-stocking the refrigerator.  The food supply was getting a bit low after two weeks in the little town of Lone Pine.

The wind finally died down on Thursday so we drove north to the west entrance to Joshua National Park.  After a stop at the visitor center to get some maps, we headed into the park for a couple of short hikes.  The park is over 3,000 feet higher in elevation compared to Desert Hot Springs so it was a bit chilly as we entered the park. 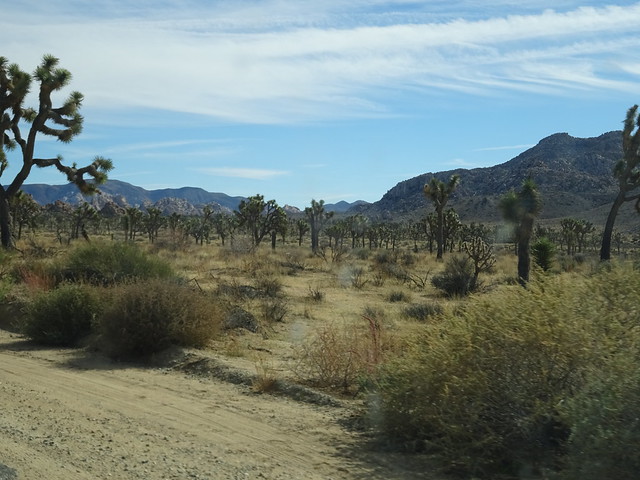 We parked in the Barker Dam Parking Area where two short trails begin.  The first trail we hiked was the Barker Dam Loop, a hike of just under a mile and a half.  The trail is pretty flat, well-maintained, and scenic, making it one of the most popular hikes in the park.  Even though it was the middle of the week in early November there were quite a few people on the trail. 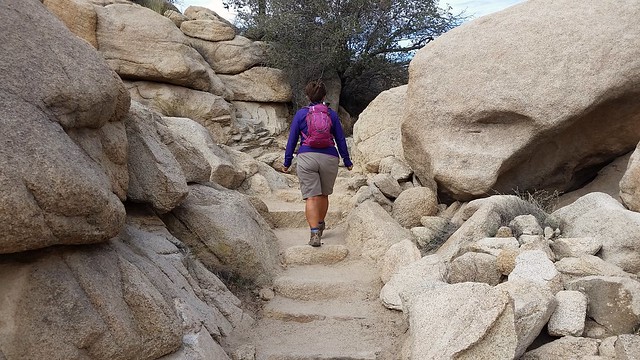 On the Barker Dam Trail 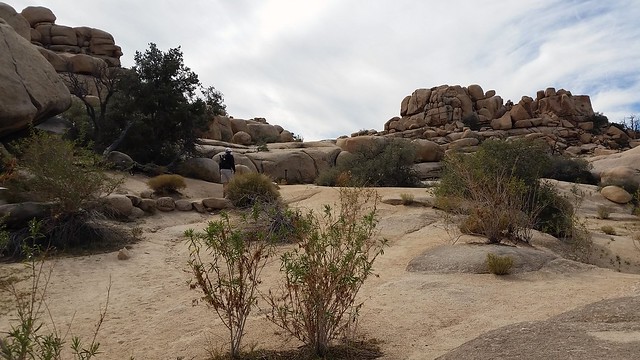 Winding through the rocks

The Barker Dam, also known as the Big Horn Dam, was constructed by early cattlemen in 1900.  It was raised in 1949 by rancher William F. Keys.  Although up to ten feet deep and quite extensive in winter, the reservoir dries up almost entirely in summer, replaced by a field of green grass.  The high water mark is evident by a dark ring all around the surrounding rocks. 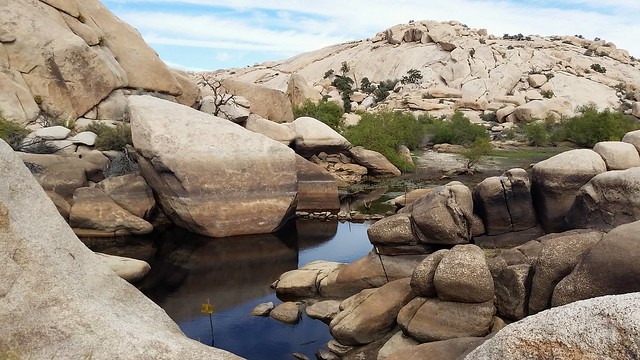 The water tank behind the dam 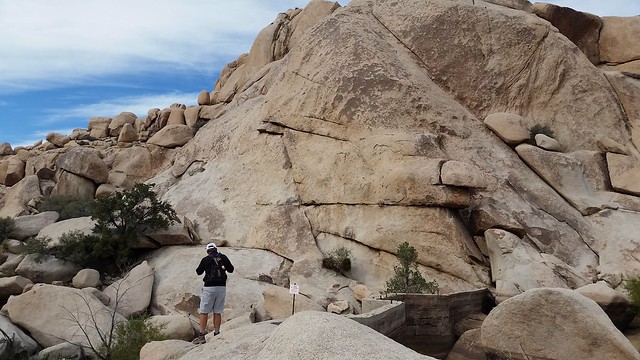 Top of the Barker Dam

The lowest nine feet of the dam, the original portion, was constructed of concrete surfaced with stone on the downstream side.  The height of the dam was raised an additional six feet with concrete in 1949-1950.  An inscription at top reads: “Big Horn Dam Built by Willis Keys, W.F. Keyes, Phyllis M. Keys, 1949-1950.” 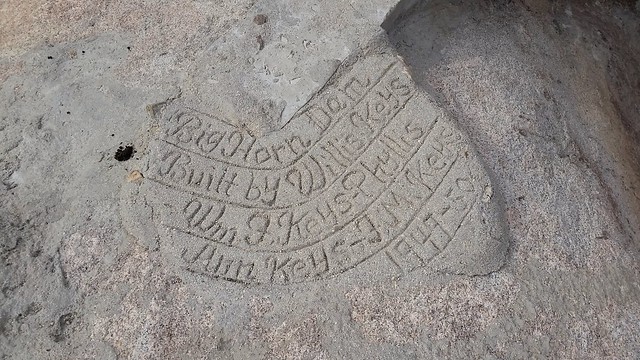 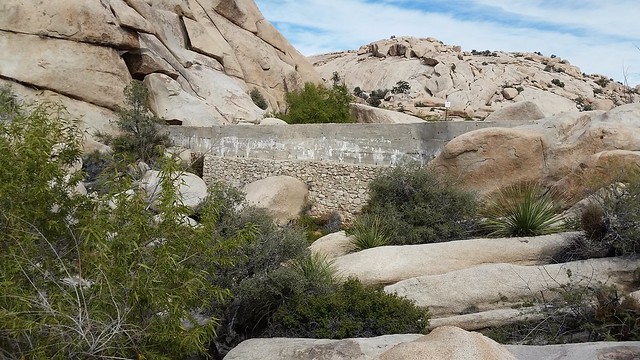 The dam from downstream 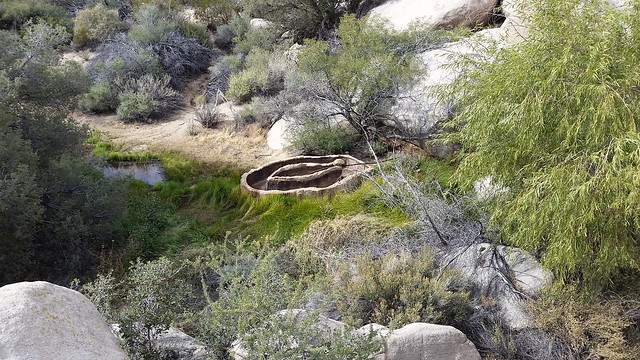 Water trough for cattle near the dam

The park calls this an interpretive trail and there are numerous information displays describing the plants and animals native to the area. 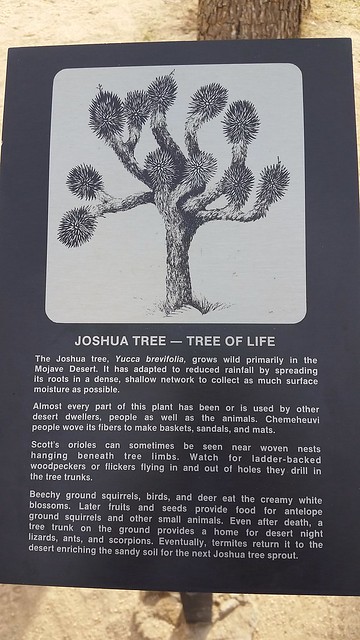 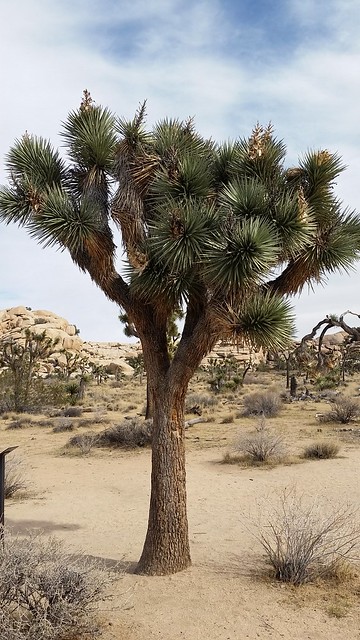 A marked turnoff visits a rock covered in vivid petroglyphs next to a nice arch.  The drawings had their colors enhanced by a film crew working on an old Hollywood movie, which explains why they look too colorful to be real. 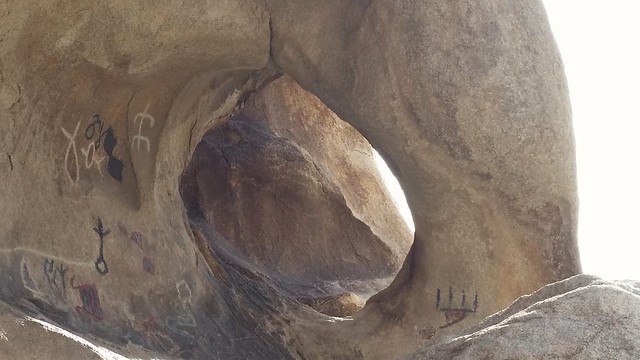 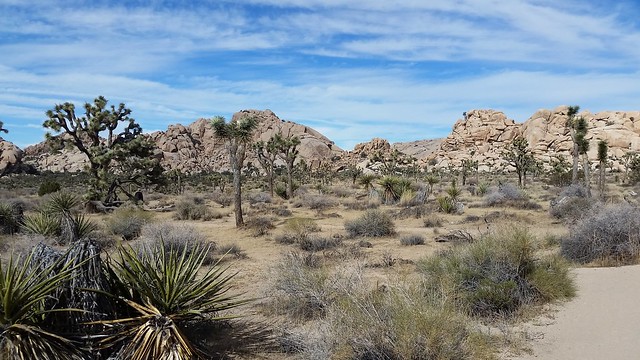 Beautiful desert just beyond the petroglyphs

The second trail that begins in this parking area is the Wall Street Mill Trail.  This flat, deep sand trail is a little over a mile one way and ends at the remains of a small stamp mill.  The trail is a bit difficult to follow as there are no signs beyond the trailhead and numerous small trails branch off from the main trail, but if you keep going to the north and keep an eye to the west you will find the mill.

Just a short distance from the trailhead we came to a “Y” in the trail.  As the great Yankee catcher Yogi Berra once said, “When you come to a fork in the road take it.”  That’s what we did!  We took the left trail as we could see the ruins of a building just a short distance away.  There are no signs describing the ruins but a little research later revealed it to be what’s left of what was known as the Wonderland Ranch. 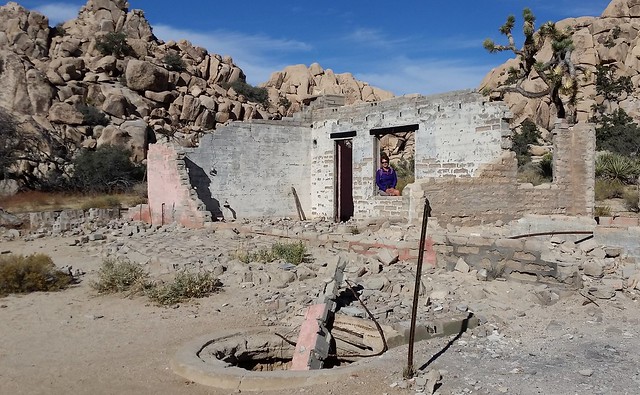 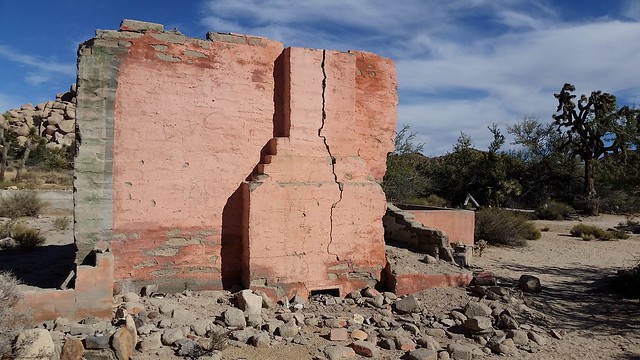 We stopped at the visitor center on our way out of the park and inquired about the ruins.  The ranger called it the pink house and said that it had various uses over the years, the last being the site of a health food store in the 1960s.  Business must have been a bit slow, as this area is very remote. 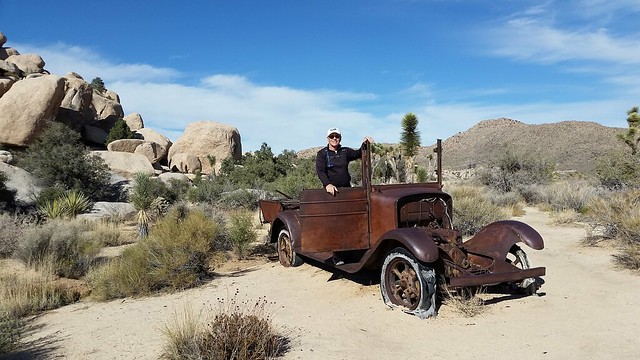 We left the ruins following a trail north through the desert and soon came to the ruins of the Wall Street Stamp Mill.  During the early years of the 20th century this area was scattered with miners on the hunt for gold and silver.  When ore was mined, it was sent to a mill to be crushed and have the precious metal extracted.  During the Depression the area experienced a second gold rush.  As miners arrived, long-time rancher-miner Bill Keys recognized the need for a gold processing mill.  In 1930 he bought the Wall Street Mill site, which had an existing well.  Keys gathered the stamp mill and other machinery from area mine and mill sites to assemble his mill.  For a fee he processed ore for small-mine operations. 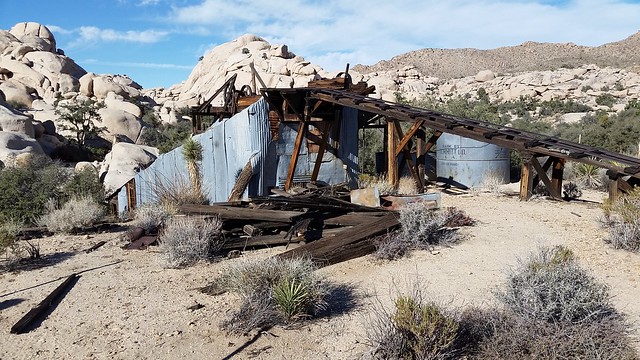 When the gold was removed from the ore, it went back to either the miner, a smelter in Mojave, or to the U.S. Mint in San Francisco.  Keys ran the mill on an as-needed basis, last using it in 1966. 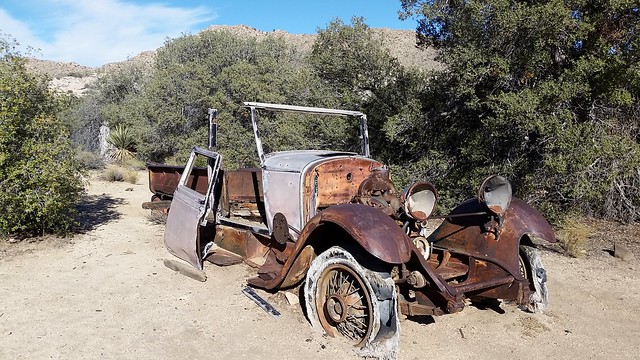 One of a couple old cars sitting near the mine 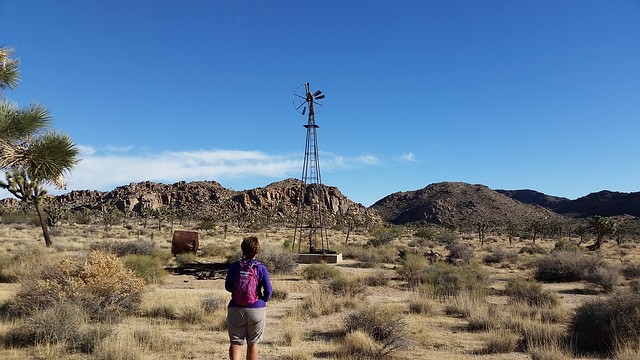 An old wind mill sits along the trail near the mine

Both of these trails have little or no gain in elevation but go through some scenic areas.  They also present some of the history of the area and make for a nice place to experience Joshua Tree NP.

27 Responses to On to the Coachella Valley and Joshua Tree Nat. Park