Posted on November 2, 2015 by placestheygo

When we came to Lone Pine we planned a one week stay.  But we found so much to do and see that we have been here for just over two weeks.  We would enjoy staying a bit longer but the weather is beginning to change and the temperature is beginning to drop, so it is time to head south for warmer climates.  But before we go we had one more hike on our radar.

Beginning at Onion Valley Trailhead, the Kearsarge Pass Trail travels through the John Muir Wilderness.  The trail climbs through forest and alpine tundra and past several lakes, on its way to 11,760 foot Kearsarge Pass.  Beyond the pass, the trail enters Kings Canyon National Park, where it joins the John Muir Trail.  The trail is eight miles long, but we planned a hike of two and a half miles to Gilbert Lake at an elevation of 10,417 feet. 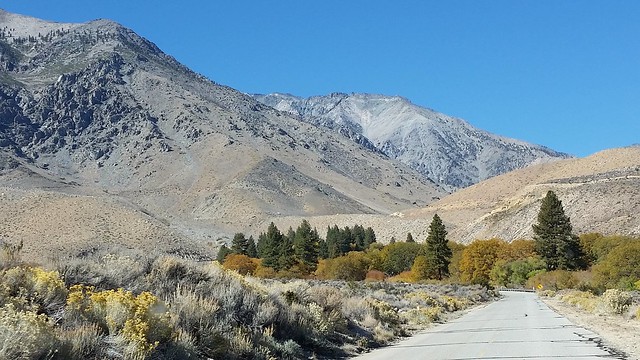 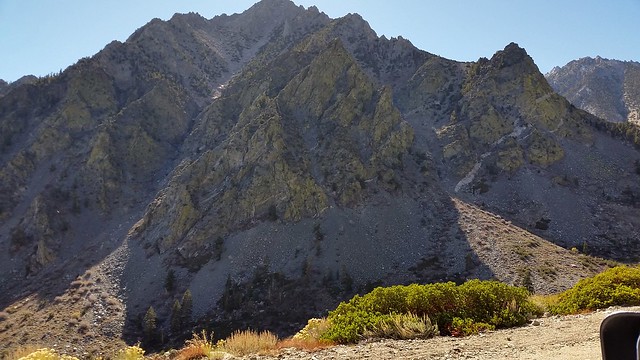 Lichen growth colors the mountains along the Onion Valley Road

To get to the trailhead we drove north from Lone Pine to the little town of Independence.  In the center of town we turned west on Market Street, which soon turns into Onion Valley Road.  The road twists and turns for thirteen miles as it gains elevation from 3,700 feet in town to 9,200 feet at the parking area for the trail. 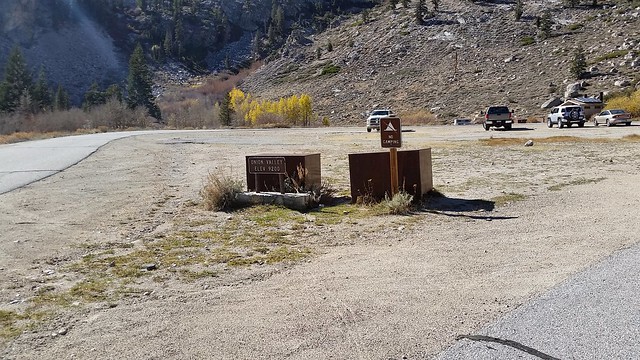 The parking area in Onion Valley 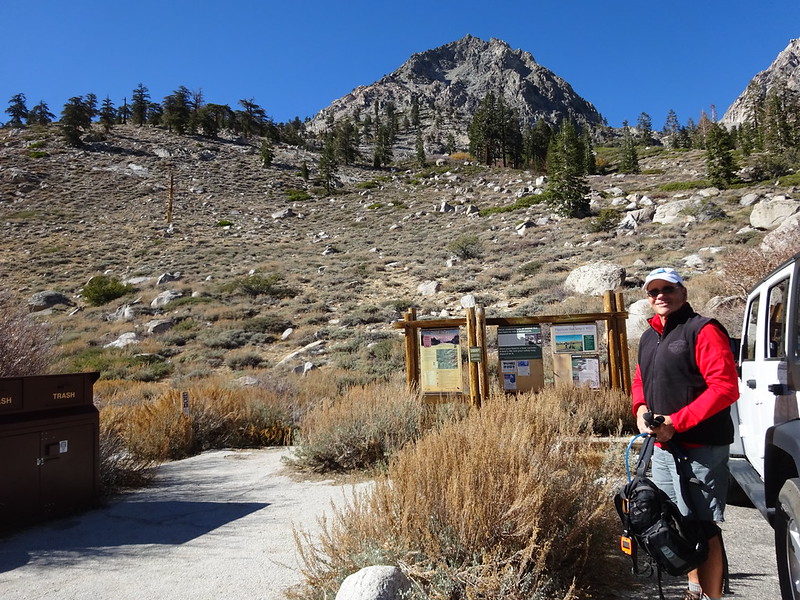 It was cold and very windy at the trailhead so we anticipated even colder temperatures as we gained elevation on the trail.  We could see snow blowing around the tip of nearby University Peak (13,589′). 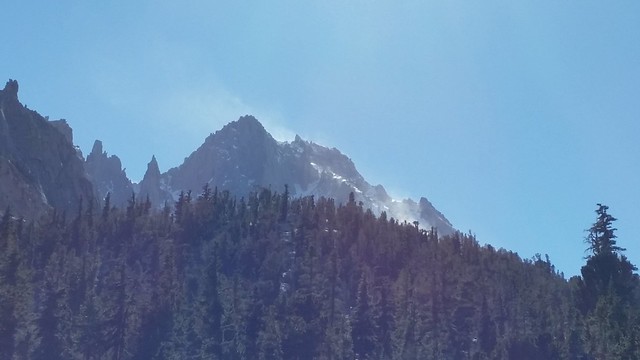 The Kearsarge Pass Trail is a well-maintained trail that goes up on a series of long switchbacks. 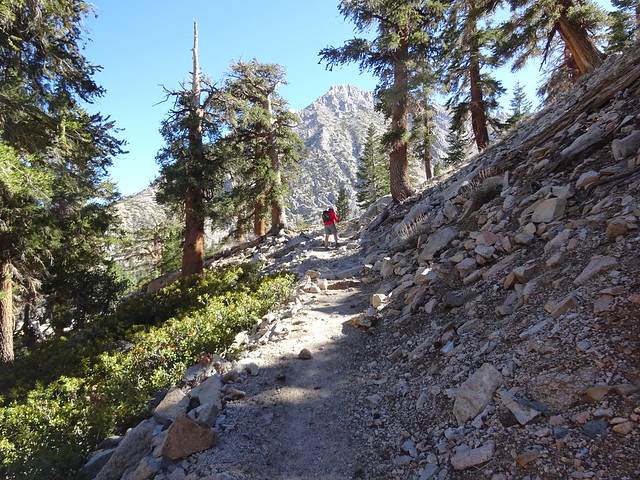 As we gained elevation the views we had of the mountains surrounding us were impressive. 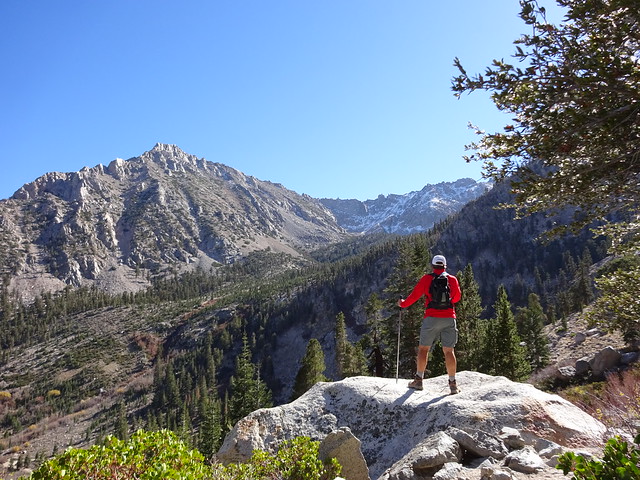 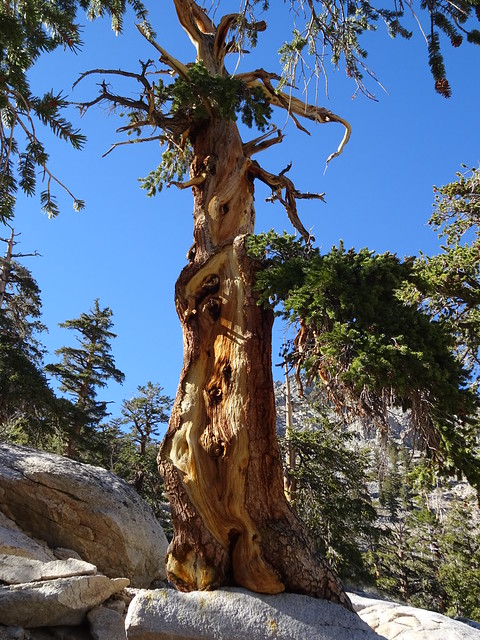 A tree needs to be rugged to survive in these conditions

Temperatures overnight were well below freezing in this area, so we saw a bit of ice along the creek near the trail and in one spot a puddle had frozen solid along the path.  We think this ice will stay here until late spring. 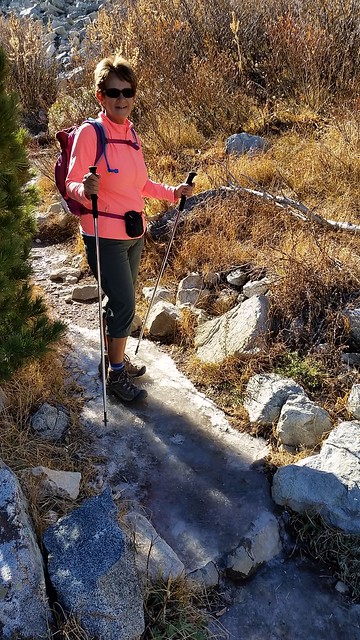 A patch of ice on the trail 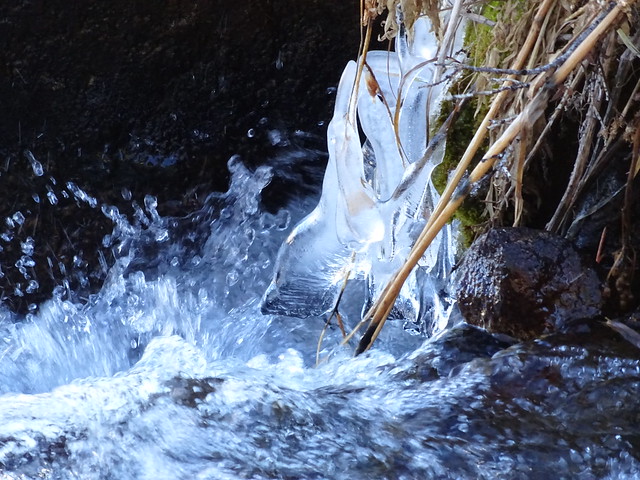 At one point the trail went right through a large field of crushed rock.  It appeared the mountain to our north had suffered a rock slide some time far in the past. 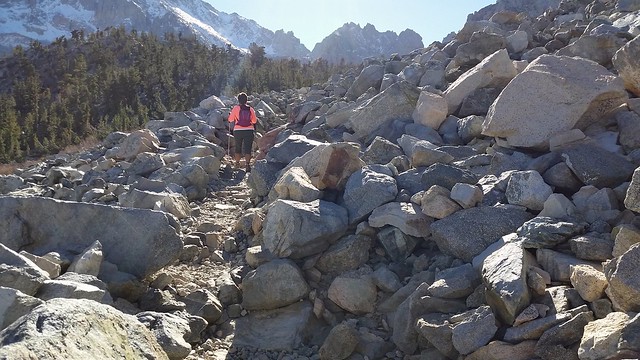 Looking west through the rock field 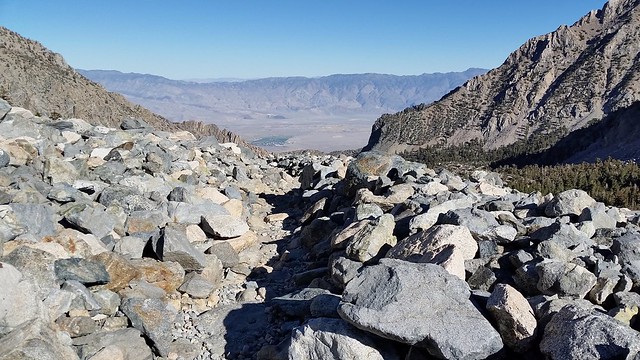 Looking east, the green patch in the distance is the town of Independence 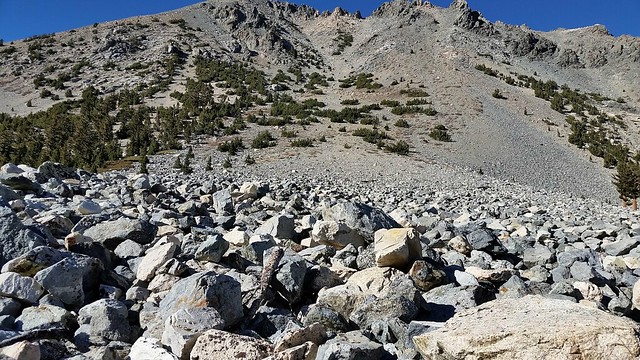 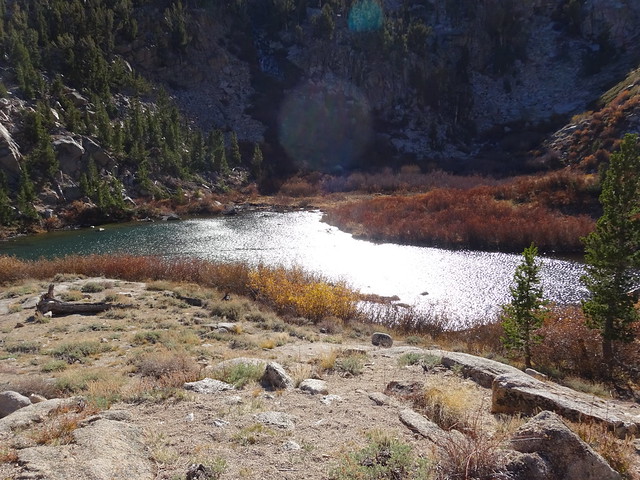 Along the way we passed Little Pot Hole Lake

Soon we came to the beautiful Gilbert Lake, our destination. 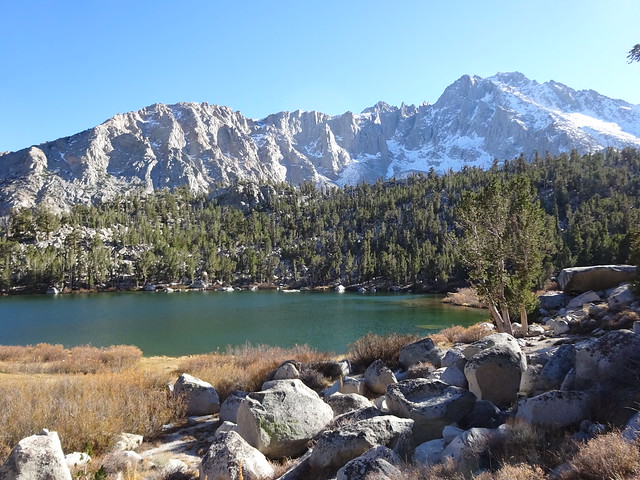 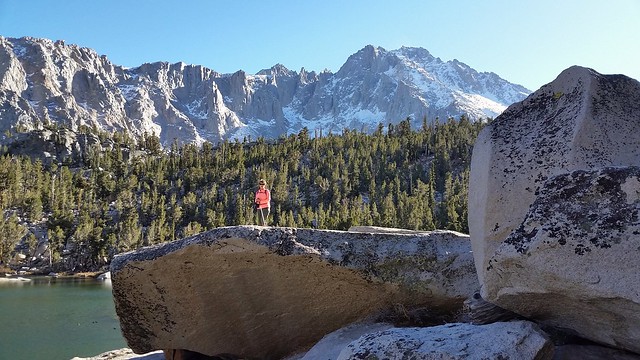 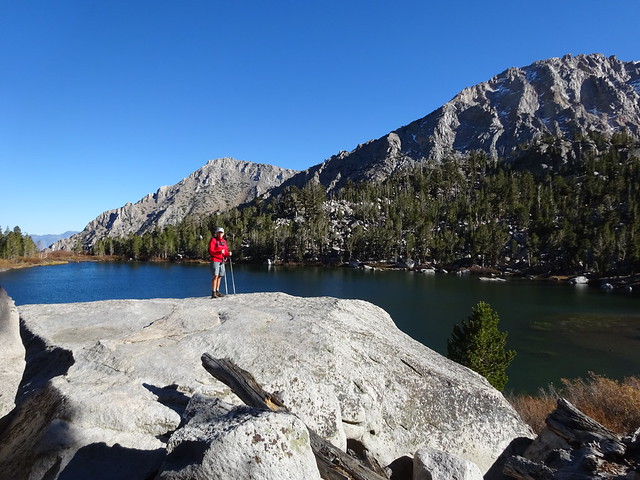 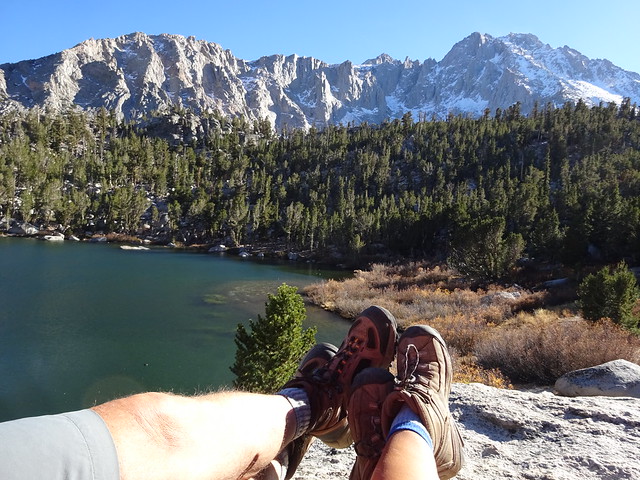 We had just set the clocks back an hour the night before so the sun was going down pretty early.  Since we were on the east side of the mountains, it wasn’t very long before we were hiking in the shadows.  With the wind still quite strong and being at a high elevation, the temperature began to drop and a couple of hikers became a bit chilled! 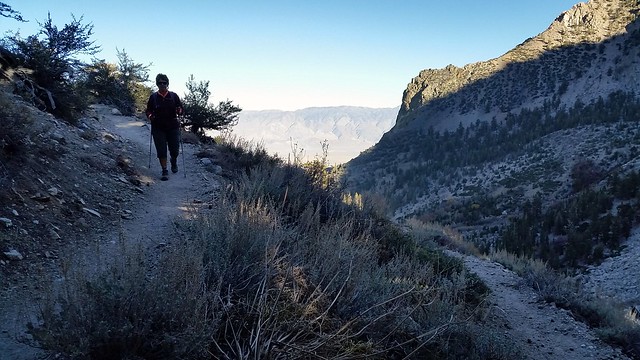 Hiking down through the cold

We returned to the Jeep where the temperature read 48 degrees and quickly warmed up as we headed for home.  It was 75 down in Independence with no wind.  Driving back down the mountain we could see the road winding around below us. 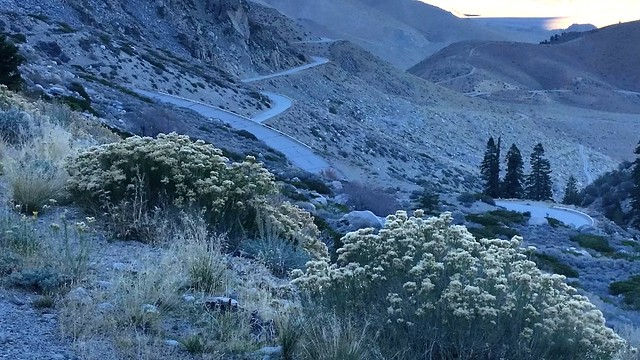 We haven’t seen much wildlife in our trip down the east side of the Sierras, so we were happy to see two sentinels keeping an eye on us as we drove back into the Owens Valley. 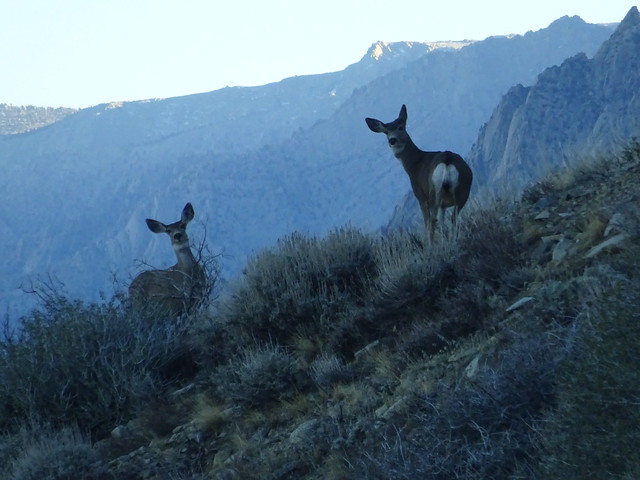 Well, that wraps up our tour down US-395 along the east side of the Sierra Nevada Mountains.  It has been a month since we left Nevada and began this journey and we have enjoyed every minute.  While there are still places we would like to explore here, it’s time to head to warmer locations.  Next up is a stay in Desert Hot Springs in the Coachella Valley of southern California.