Arches in the Alabama Hills

The Alabama Hills are a range of hills and rock formations near the eastern slope of the Sierra Nevada Mountains just west of Lone Pine.  The rounded contours of the hills contrast with the sharp ridges of the Sierra Nevada to the west.  Although this might suggest that they formed from different forces and events, the Alabama Hills are the same age as the nearby Sierras.  The difference in wear can be accounted for by different patterns of erosion.

The Alabama Hills were named for the Confederate warship CSS Alabama during the Civil War.  When news of the ship’s exploits reached prospectors in California sympathetic to the South, they named many mining claims after it and the name came to be applied to the entire range.

Many natural arches of various sizes and shapes can be found in the Alabama Hills.  Dave and Sue (Beluga’s Excellent Adventure) joined us on two recent trips to the hills in search of some of the arches.  The photos below show many we found in those explorations using the book Arches of the Alabama Hills by Orlyn Fordham. 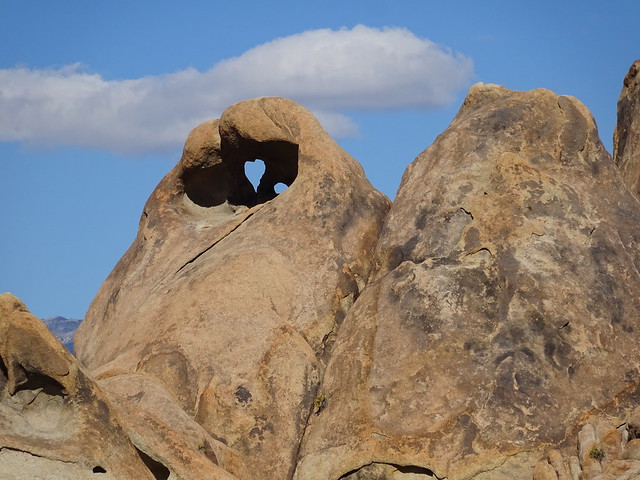 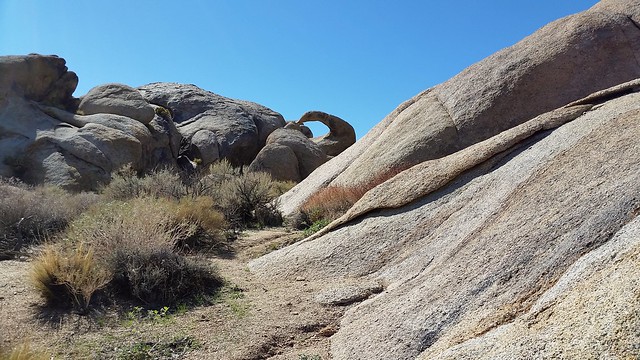 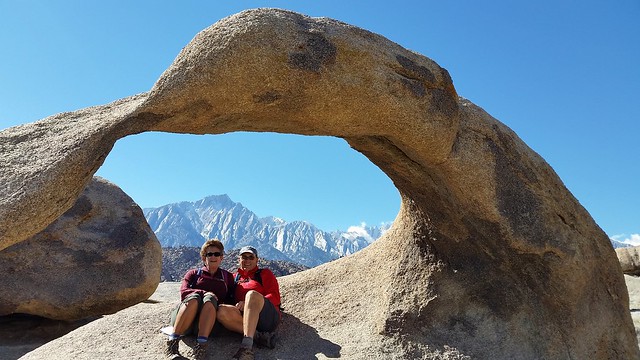 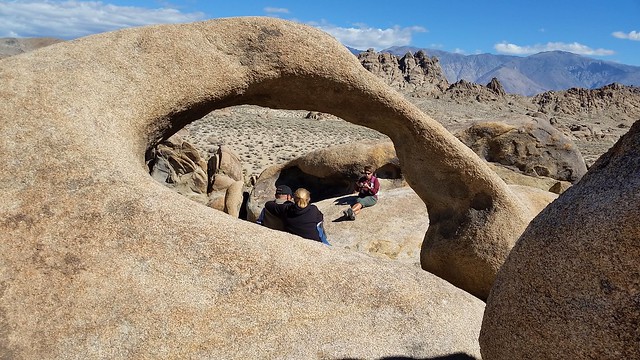 The other side of the Mobius Arch 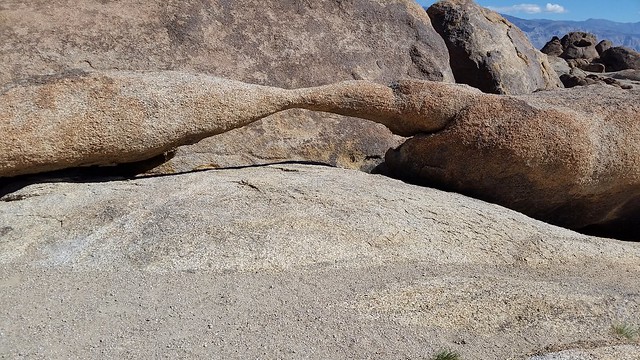 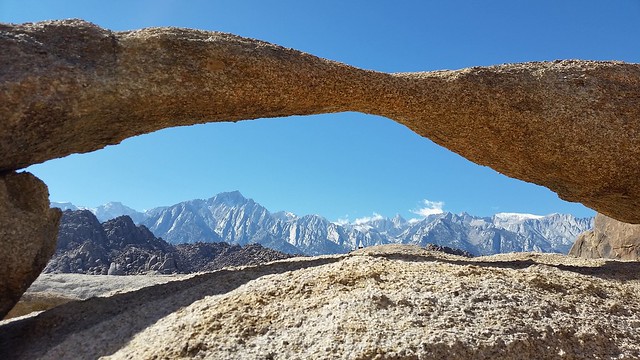 View through the Lathe Arch 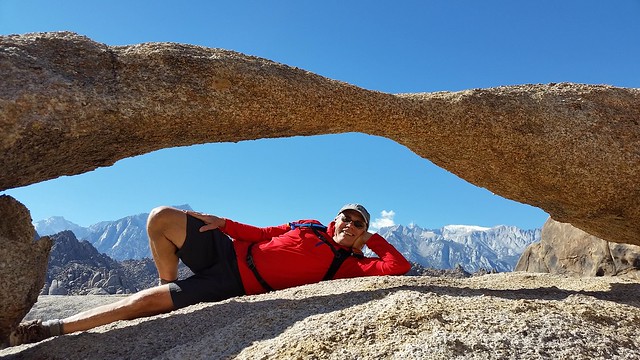 Eye Candy through the Lathe Arch 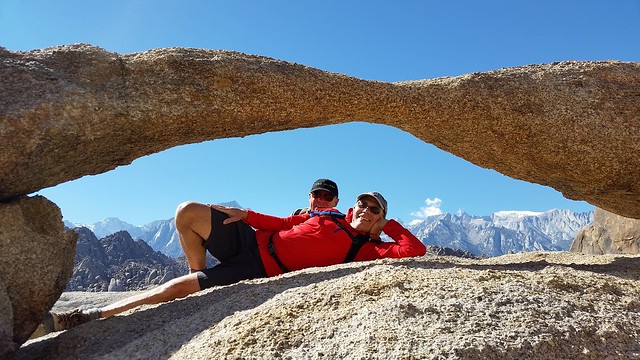 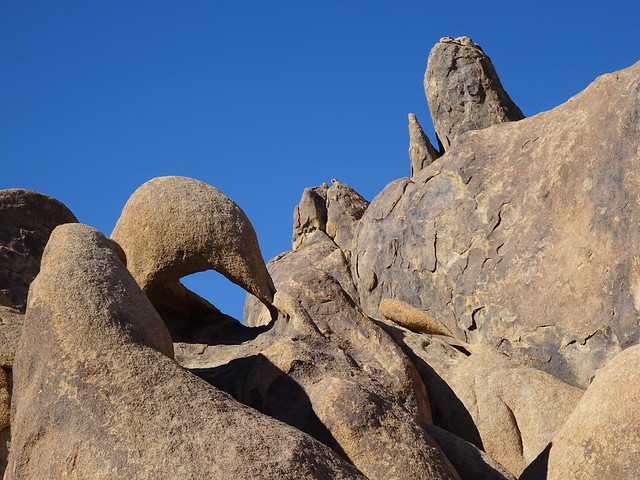 Space Case Arch with Baseball Bat Arch on the right 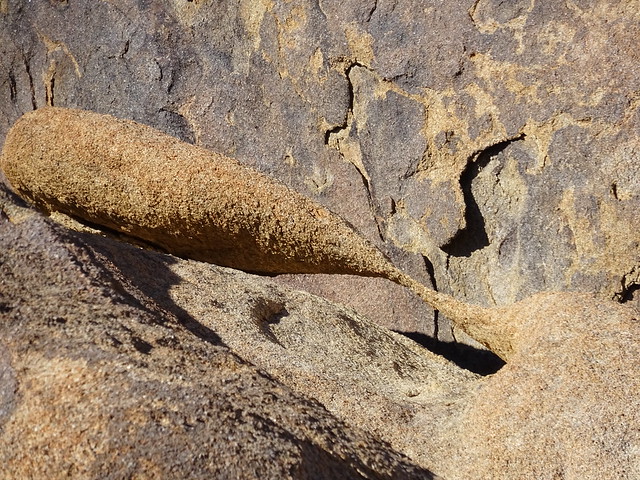 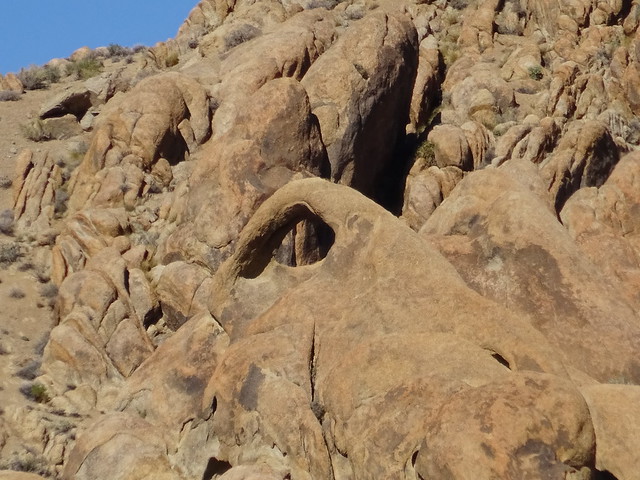 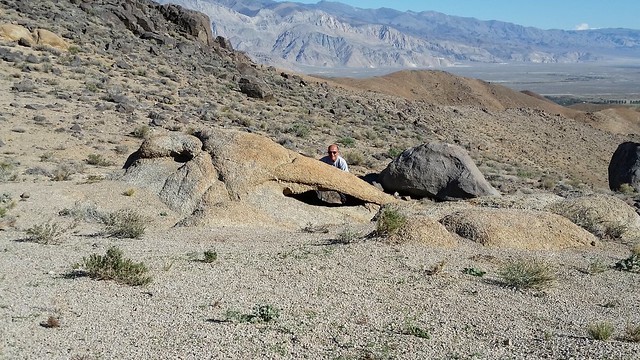 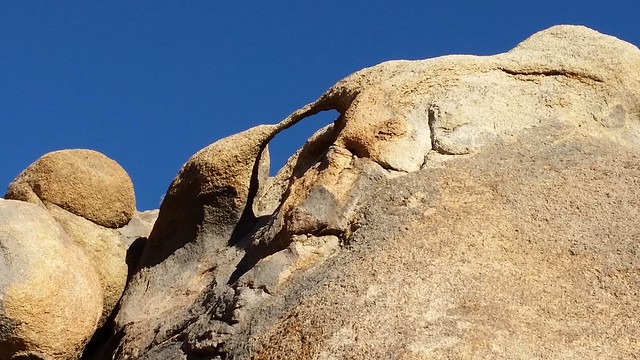 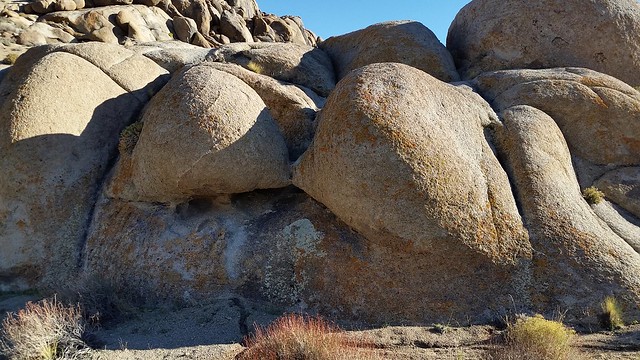 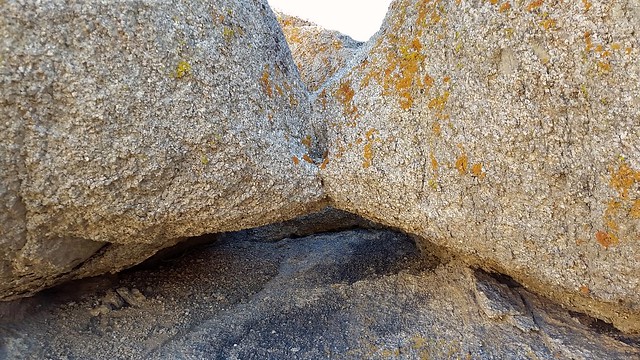 Close look at the arch in Bikini Top Arch 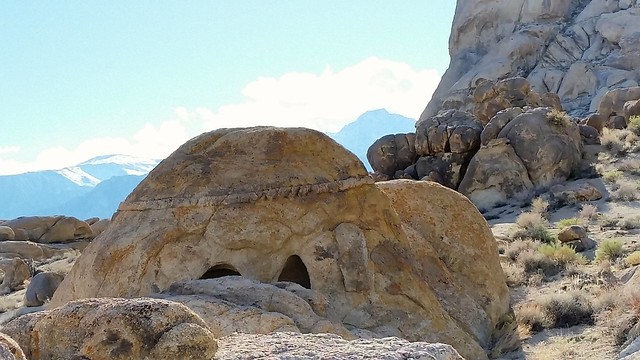 OK, its not an arch, but its an interesting rock 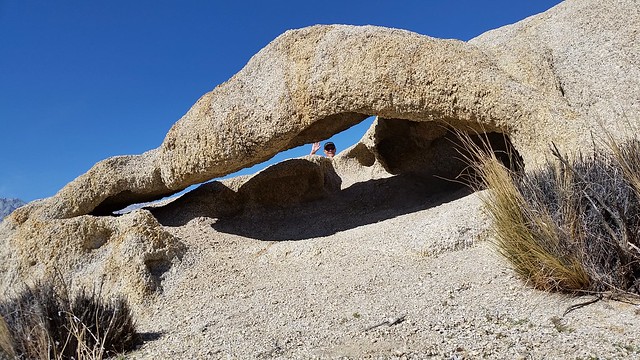 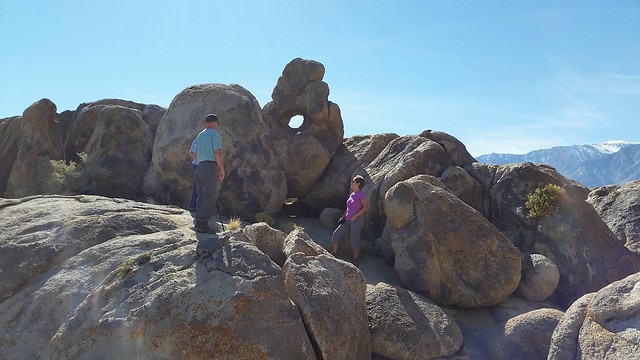 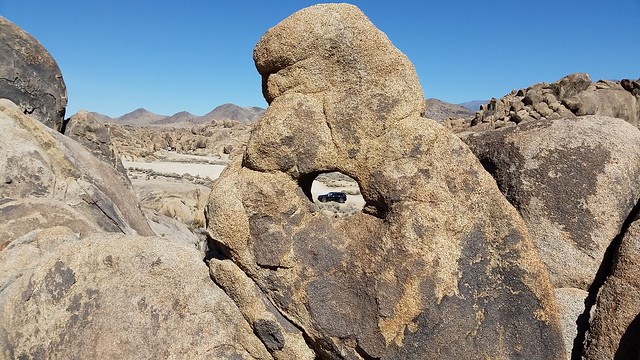 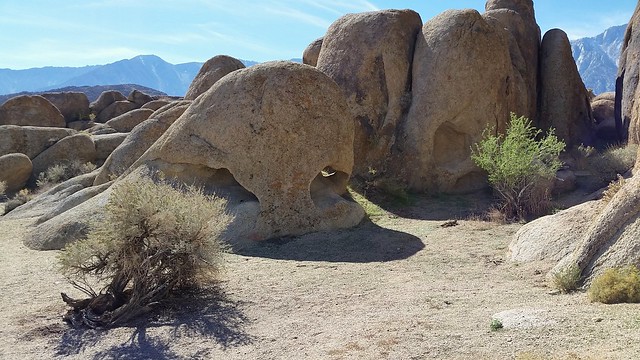 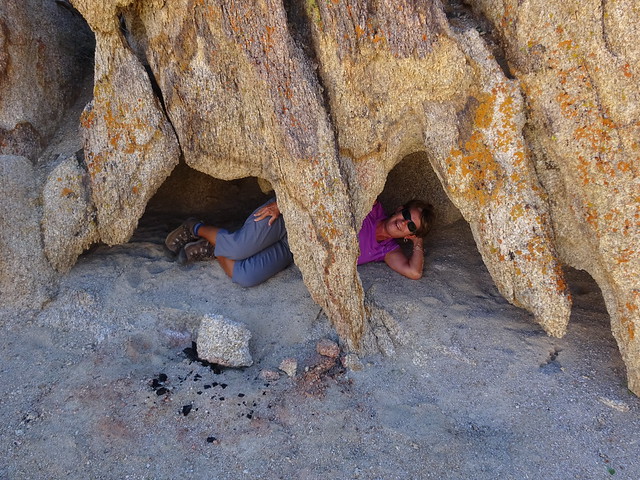 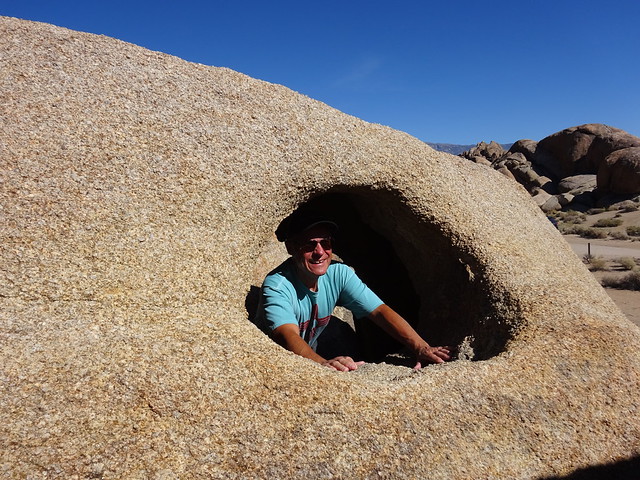 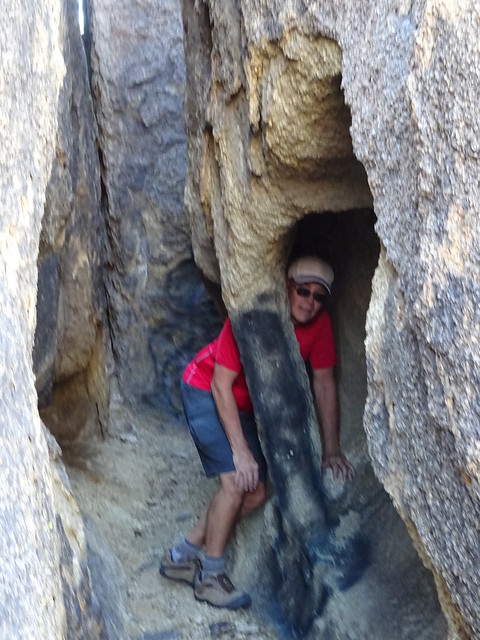 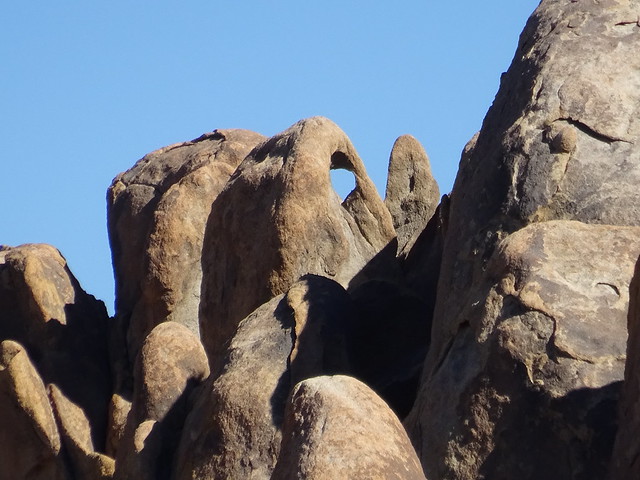 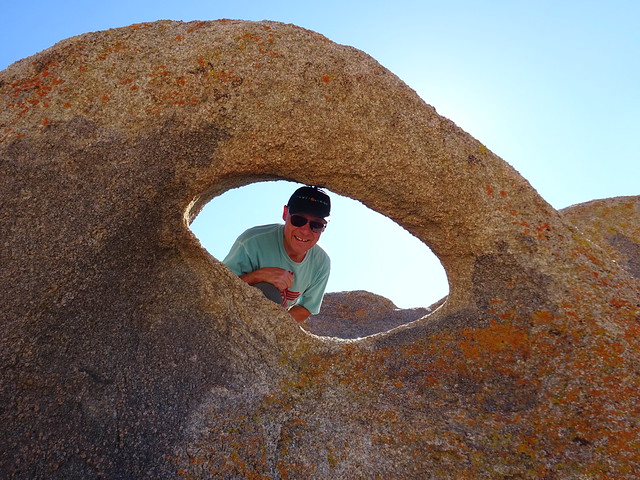 Mile Arch (and another visit from the photo-bomber!)

After our second day of searching for arches, we drove to the nearby Tuttle Creek Campground where Eric and Laurel (ravenandchickadee) were camped as they had invited us for happy hour.  Jodee and Bill, who are staying in the same RV park as us, also joined the group.  We had a couple hours of pleasant conversations while enjoying drinks and snacks.  The desert cools rapidly when the sun sets so Eric made a great fire to warm us as we shared stories. 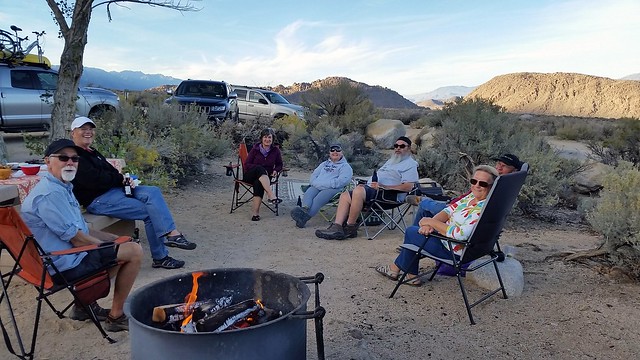 Eric, John, Laurel, Jodee, Bill, Sue, and Dave (is that the photo-bomber?)

We had planned to stay in Lone Pine for a week but have found there is just too much to do and see here.  So we “re-upped” for another week to do some more exploration.

30 Responses to Arches in the Alabama Hills