A Portal and a Ghost Town

Monday night the wind picked up and blew strongly through the day on Tuesday.  It made hiking a bit uncomfortable so we invited Sue and Dave to join us in an auto hike through a couple of interesting places in the area.  First up was a trip into the Sierra Nevada Mountains to visit the Mt. Whitney Portal. 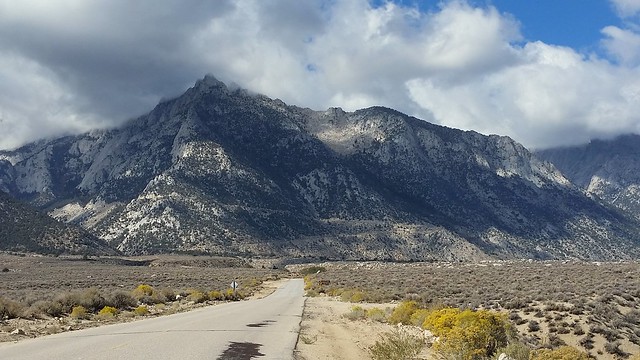 Heading toward the Sierras

Whitney Portal is located nine miles west of Lone Pine at an elevation of 7,851 feet.  As its name suggests, it is the gateway to Mount Whitney, the highest point in the contiguous United States.  It is the trailhead for the Mount Whitney Trail, a twenty-two mile round-trip hike that goes up 6,700 feet to the top of the mountain (guess we will not be hiking that one!).   The Whitney Portal Road, built by the CCC in 1936, winds its way up the side of the mountain and into a canyon leading to the Portal. 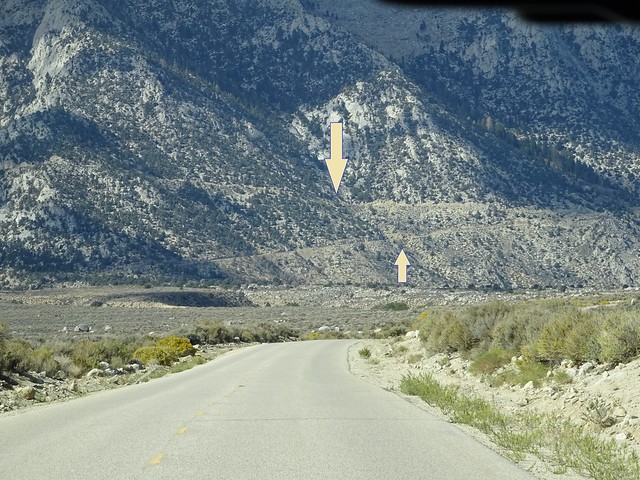 The road leading to the Portal

With the elevation gain it’s a bit chilly at the Whitney Portal.  During our visit it was about fifteen degrees colder than at Lone Pine.  Lone Pine Creek runs right through the Portal with a steep waterfall at the end of the road. 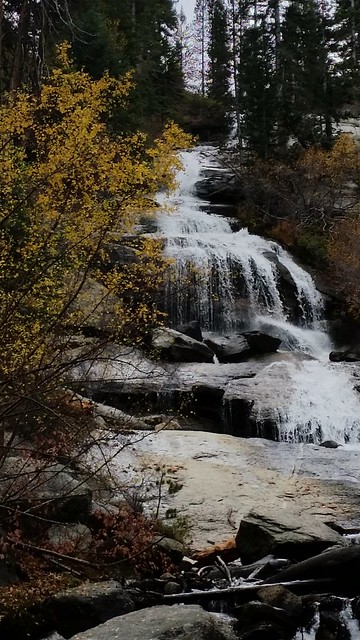 Another smaller stream running through the portal has a dam that creates a nice little pond. 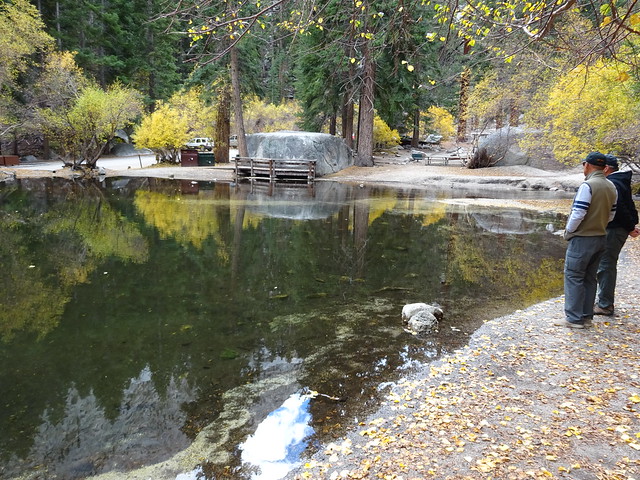 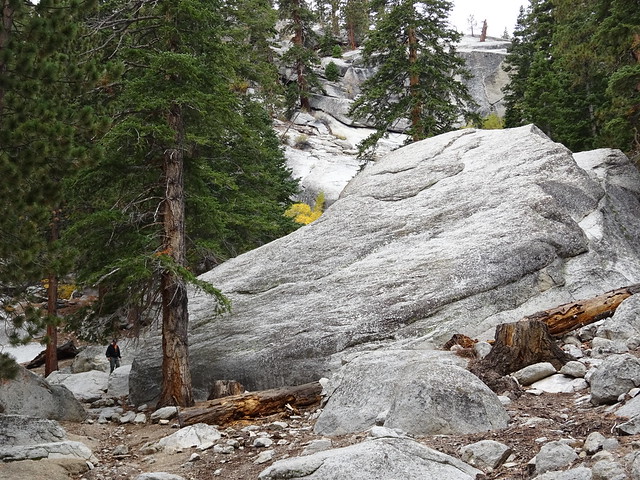 John is standing next to the rock in the lower left

Have you ever stuck your nose into the bark of  a pine tree?  This sounds a bit foolish, but if you see a very tall pine out west you may want to try it.  If the tree is a Ponderosa Pine, it will have a strong scent of butterscotch (some say vanilla).  Sue confirmed that the pine in the photo below is a Ponderosa. 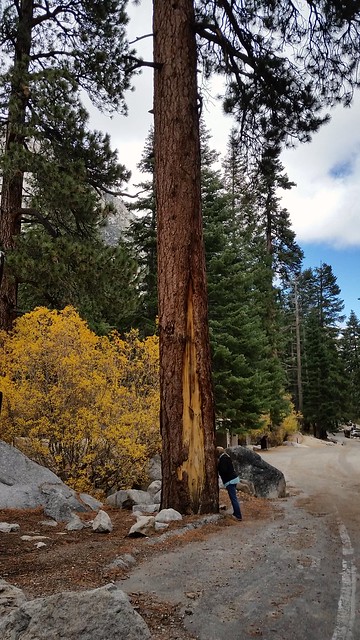 Driving back down the road we were treated to great views in the distance.  In the photo below you are looking at the Owens Valley with the Alabama Hills in the middle of the valley and the Inyo Mountains in the distance. 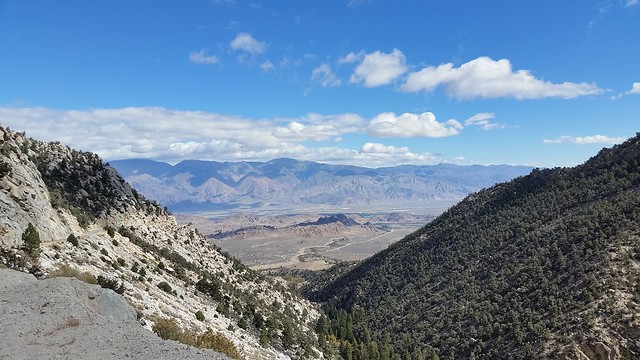 We stopped in a large pull-out area along the winding road going down to take the photo above.  As we looked at the wall of rock on the other side of the road we were struck (not literally!) by the precarious position of many of the large boulders on the steep wall. 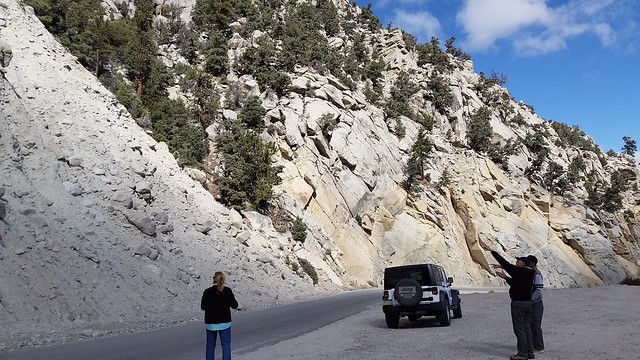 Some rather large objects looked as if a strong wind would bring them tumbling down onto the road.  We decided maybe it was time to “ease on down the road” as the wind was gusting pretty hard at that point. 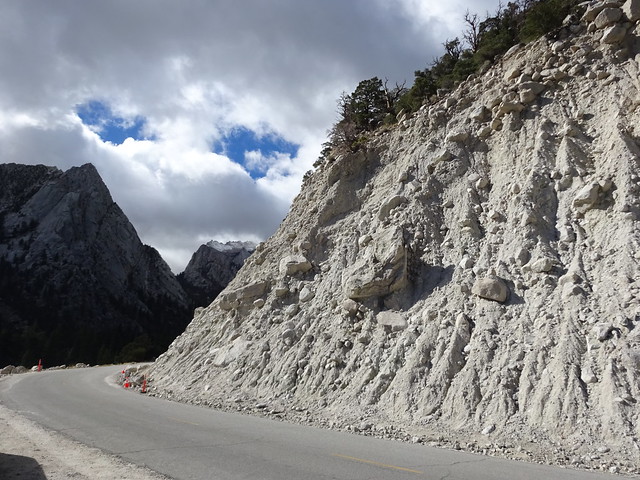 As we drove through the valley we stopped in the Alabama Hills to find a nice spot for lunch.  The Alabama Hills are the main reason we wanted to stay in this area and we will be exploring them extensively later in the week, so we’ll write more about them in a later blog (or two). 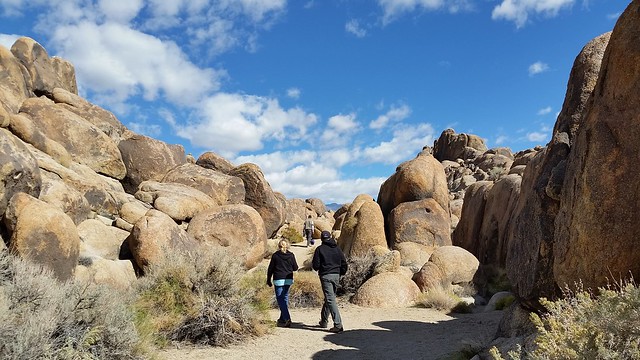 Searching for a good spot to enjoy lunch 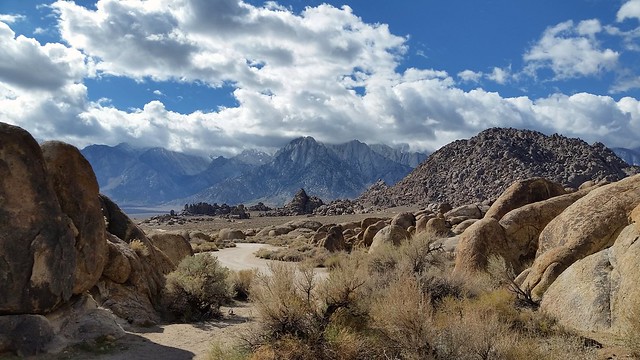 Looking back to the west at the Sierra Nevada Mountains

Next up on our driving tour was a trip out to visit the semi-ghost town of Darwin.  To get there we drove south of Lone Pine just a couple of miles and turned east on Hwy. 136 following the signs to Death Valley.  The road gently winds its way up into the Inyo Mountains. 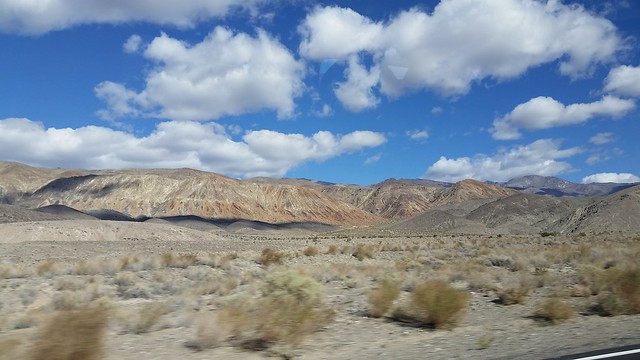 Thirty miles east on that road (it turns into Hwy. 190) we turned south on Darwin Road.  We were surprised to see a large number of Joshua Trees growing in the area. 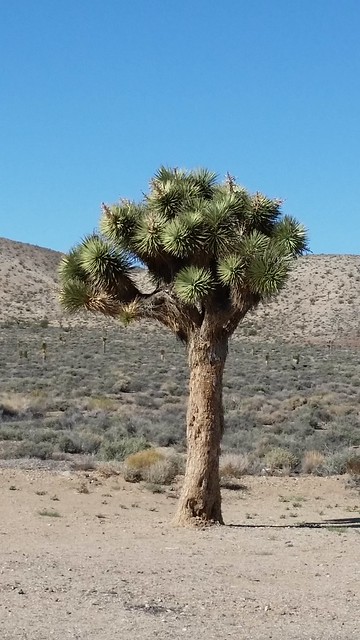 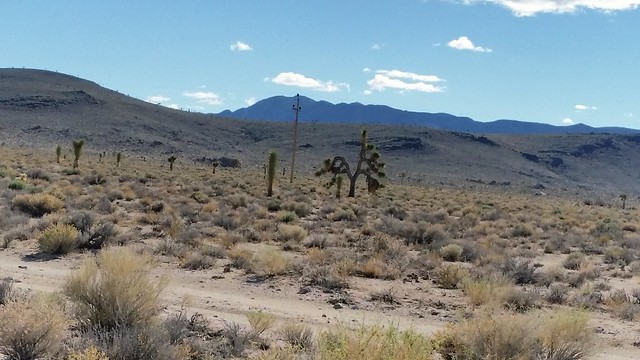 About six miles down this side road we came to the strange town of Darwin.  The town was founded in 1874 when silver and lead deposits were discovered in the surrounding hills.  At one time over a thousand people lived in the town, but the 2010 census found the population to be fifty-four hardy souls. 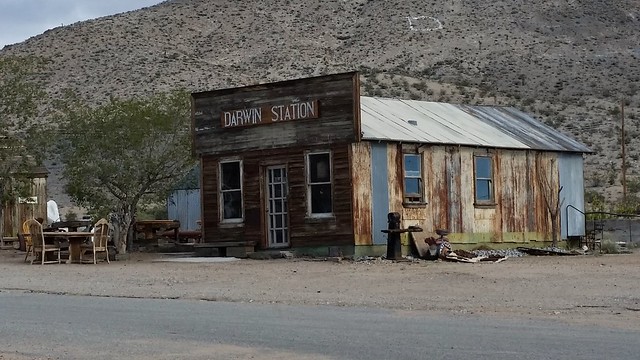 As you can see, outside seating is available

The town dance hall was a bit quiet during our visit.  You can’t see them very well in the photo below but there are three posters in the window.  On the right is a picture of a young Elvis (he may be currently living in town, who knows?), the center poster is Marilyn Monroe, and on her left (appropriately) is a poster of President Obama (although you can’t see it).  We couldn’t quite figure out the purpose of the broom strapped to a post on the porch. 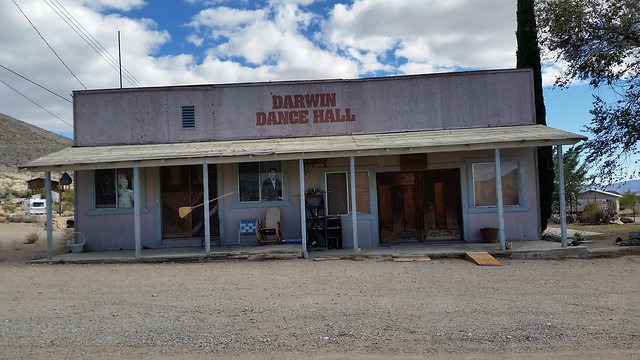 Apparently many of the residents consider themselves artists, as there are numerous strange “artsy” displays around the town. 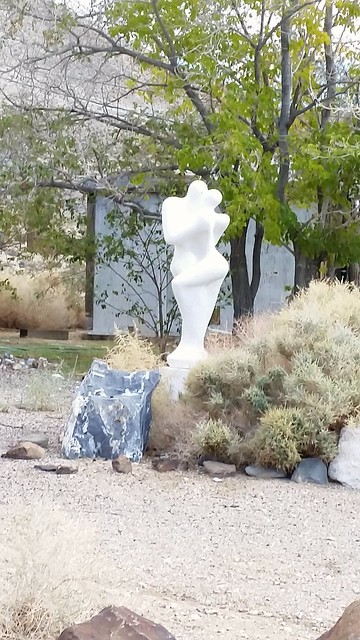 Sculpture of a couple embracing 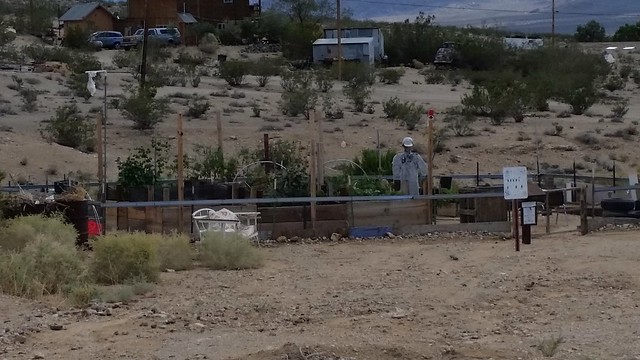 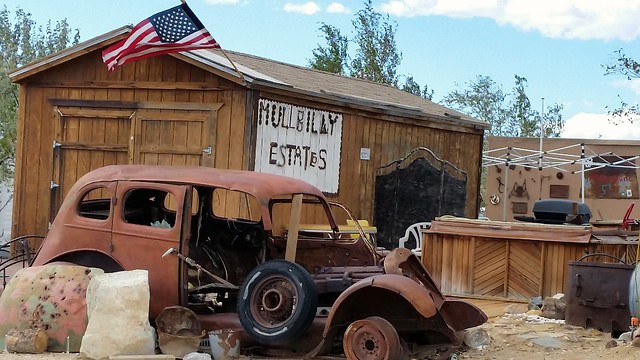 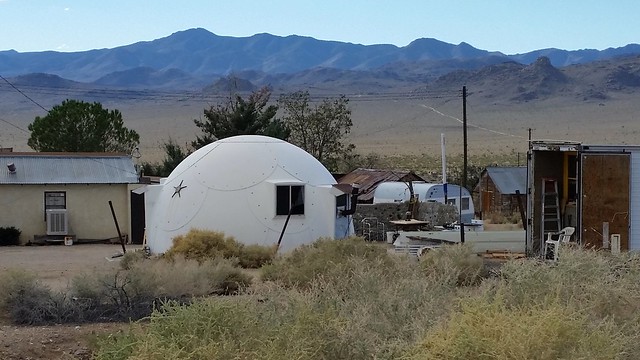 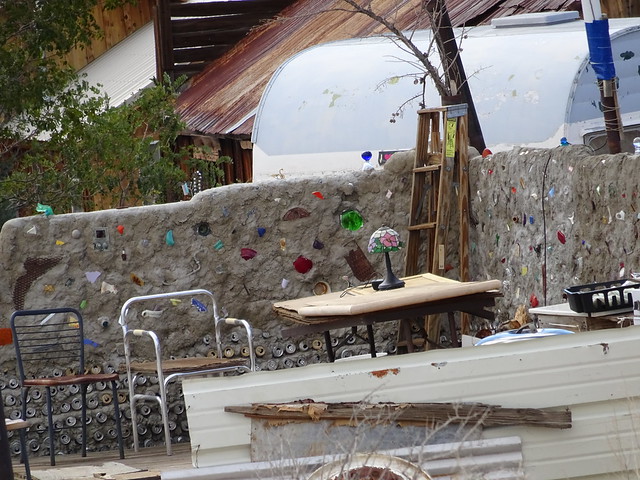 Check out the cans in the base of the wall 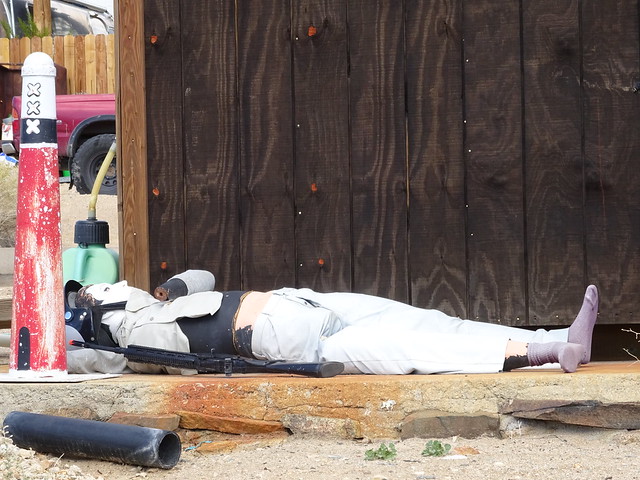 Hey, even mannequins need a rest! 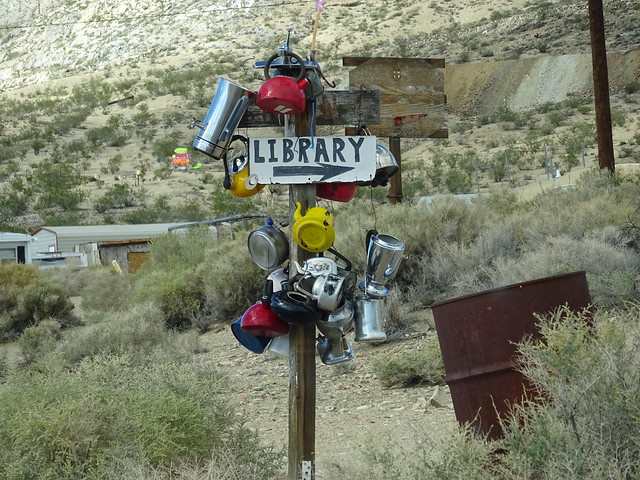 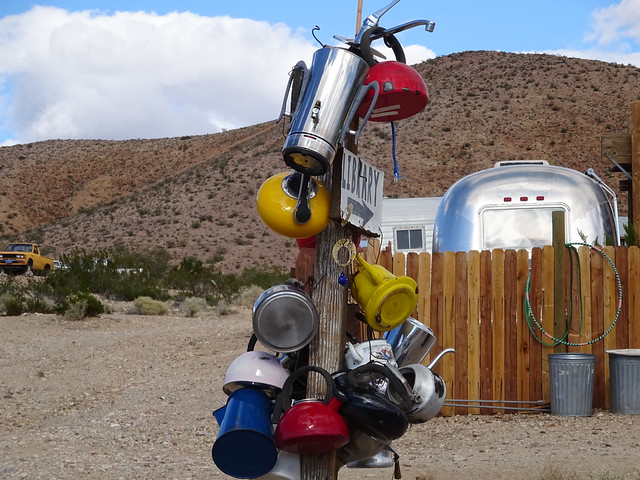 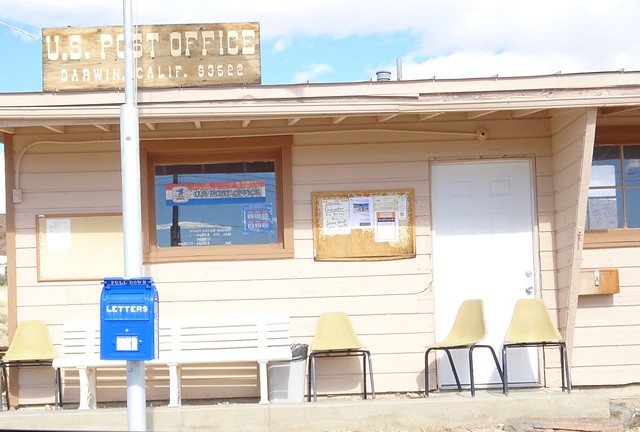 Yes, the have a functioning post office with their own zip code

We were curious how children in Darwin go to school.  But a little research revealed that there is no one younger than twenty-five living in the town.  We can’t verify that with any visual sightings as we did not see a single person during our driving tour through town.  You get a strange feeling as you drive through this place, and we would not have been surprised to see zombies walking around or Rod Serling in the opening of a scene from “The Twilight Zone” standing on the corner.  But it sure was an interesting place to visit!

28 Responses to A Portal and a Ghost Town