On Wednesday we joined Dave and Sue (Belugas Excellent Adventure) for a visit to Devils Postpile National Monument.  The park is about 25 miles south of Lee Vining, just west of the ski resort town of Mammoth Lakes.  We drove two cars as it’s difficult to view the scenery if you are in the back seat.  Also, that gave Dave and Sue the ability to return to their motorhome to tend to their two dogs in the event we got carried away with our hiking.

We first drove south on US-395 and turned west on the Mammoth Scenic Loop.  This allowed us to make a brief side trip to visit the Inyo Craters. 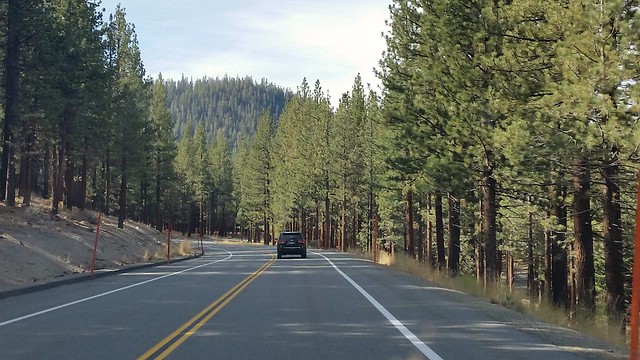 Following Dave and Sue on the Mammoth Scenic Loop Road 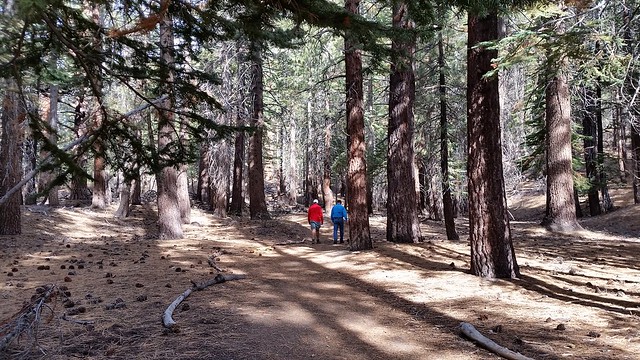 Two young hunks hiking up to the Inyo Craters 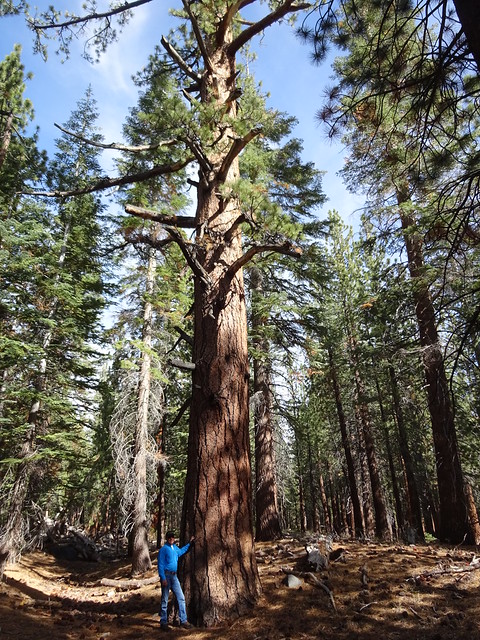 A huge Jeffrey Pine along the trail 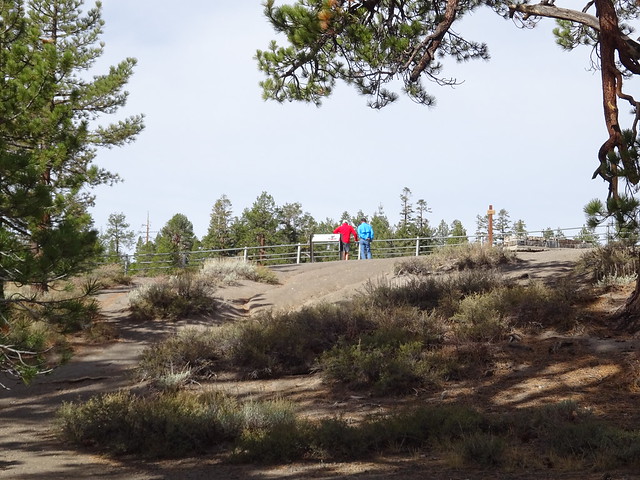 Those two hikers on the rim of the crater

The Inyo Craters are three craters located a few miles north of the town of Mammoth Springs.  These three volcanic craters were formed by a series of small but violent steam-blast eruptions on the summit and south flank of Deer Mountain about 600 years ago. The two southernmost craters contain small lakes. 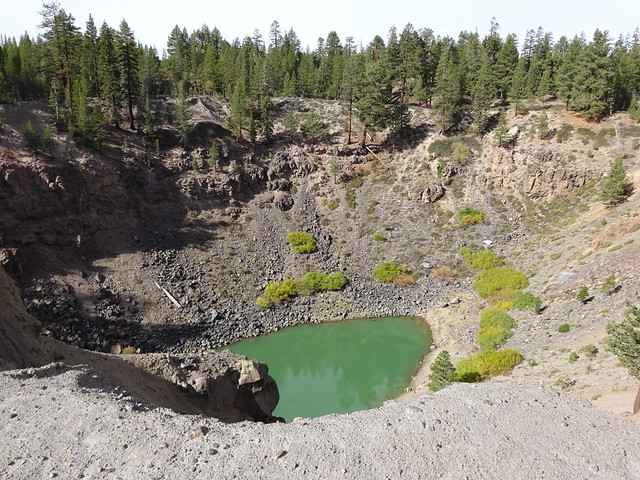 One of the three Inyo Craters

After checking out the craters we continued on Mammoth Scenic Loop Road, then turned west on to CA-203.  The road increased in elevation as we drove past the Mammoth Mountain Ski Area.  The state road terminates at the entrance to Devils Postpile National Monument. 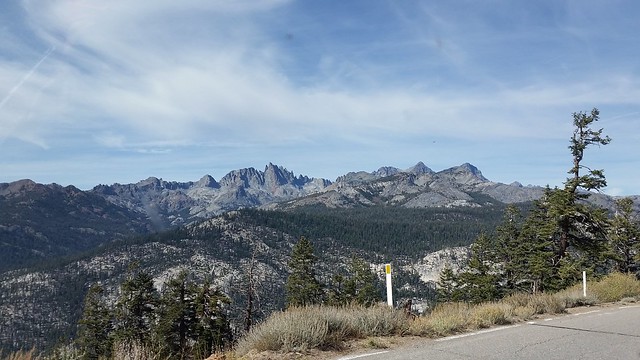 The view west from near the Devils Postpile National Monument entrance.

Once in the National Monument the narrow road winds steeply downhill for about two miles, losing a thousand feet of elevation.  During the busy summer months no cars are allowed in the Monument.  Visitors park in a lot outside the entrance and take a shuttle into the park.  But since it is the off season, the shuttle has been put to bed and you can drive (carefully) down the mountain into the park.  The road is very narrow and signs indicate that vehicles coming up the mountain have the right-of-way. 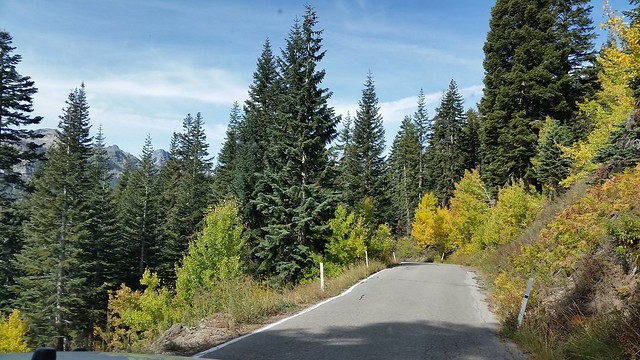 Once on the valley floor the road weaves its way through a pine forest and passes a couple of nice lakes.  We stopped and ate lunch along the shore of one of the lakes, Sotcher Lake. 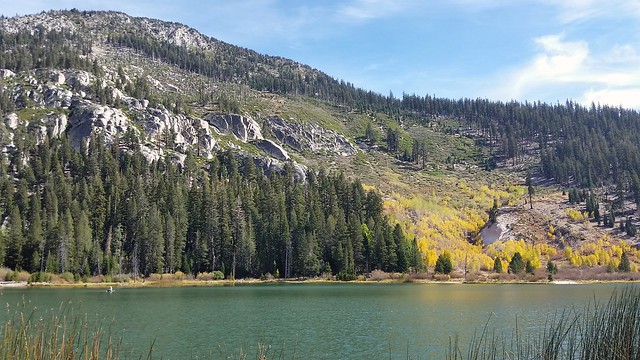 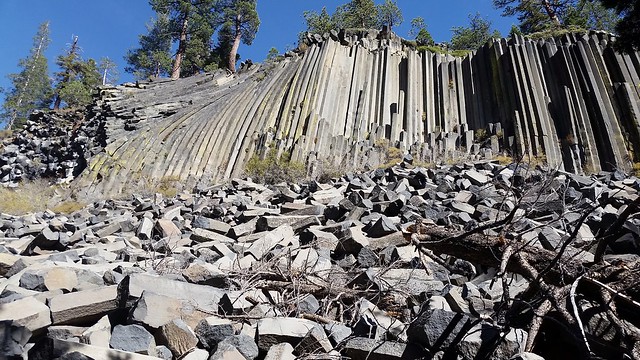 This park was created in 1911 as Devil Postpile National Monument and has long been widely referred to as Devil’s Postpile National Monument but it has been officially styled as plural without the apostrophe since the 1930s.  The monument was once part of Yosemite National Park but discovery of gold in 1905 near Mammoth Lakes prompted a boundary change that left the Postpile on adjacent public land.   Years later, a proposal to build a hydroelectric dam called for blasting the Postpile into the river.  Influential Californians, including famous naturalist John Muir, persuaded the federal government to stop the demolition and in 1911 President Taft protected the area as a National Monument. 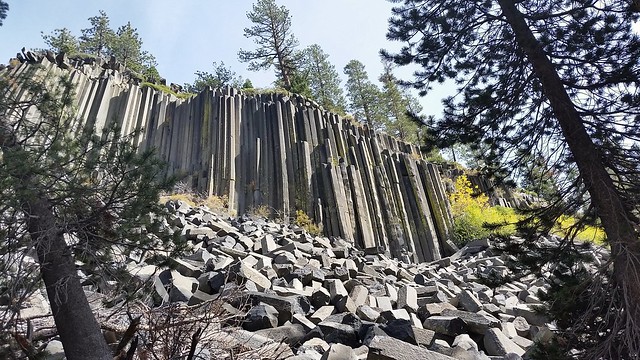 The name “Devil’s Postpile” refers to a dark cliff of columnar basalt.  Studies indicate the formation was created by a lava flow at some time less than 100,000 years ago.  Estimates of the formations thickness range from 400 to 600 feet.  Because of its great thickness, much of the mass of pooled lava cooled slowly and evenly, which is why the columns are so long and so symmetrical.  If the lava had cooled perfectly evenly all of the columns would be expected to be hexagonal, but some of the columns have different polygonal cross-sections due to variations in cooling. 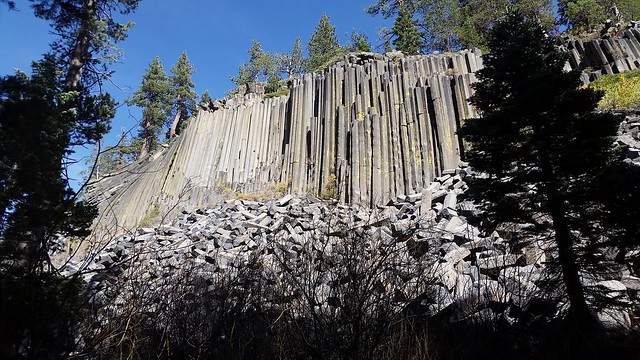 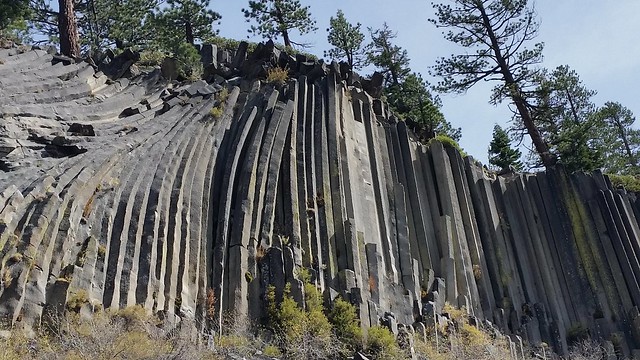 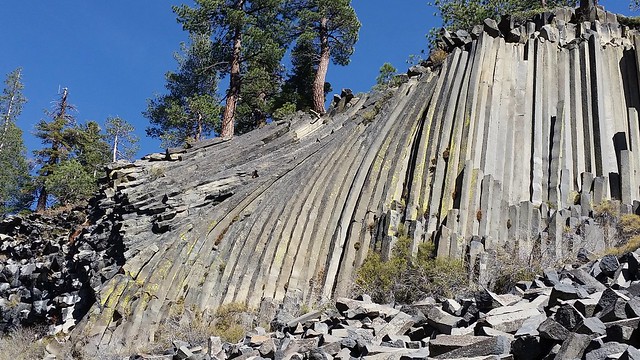 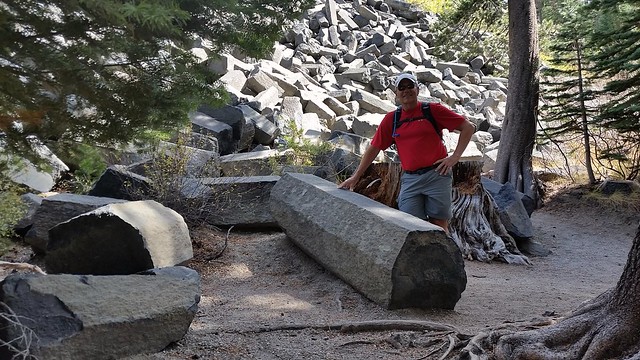 As the trail went around the south end of the formation the columns looked like a pile of logs. 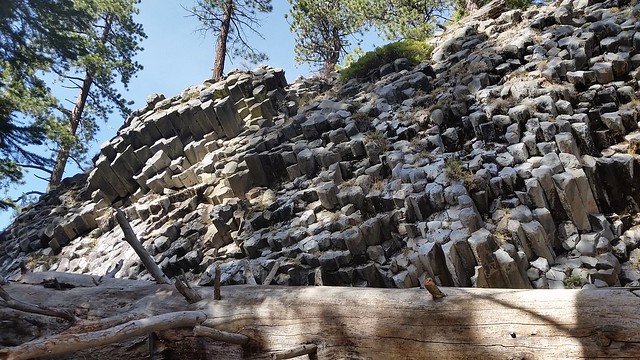 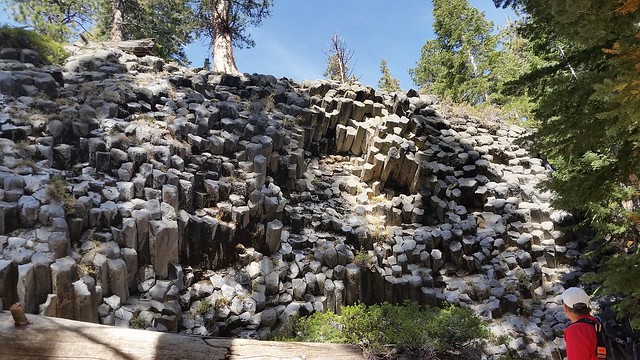 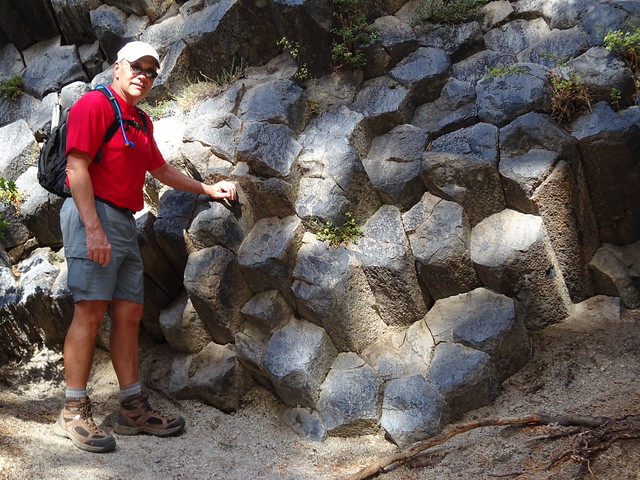 Many old, weathered tree stumps along the trail resembled interesting works of art. 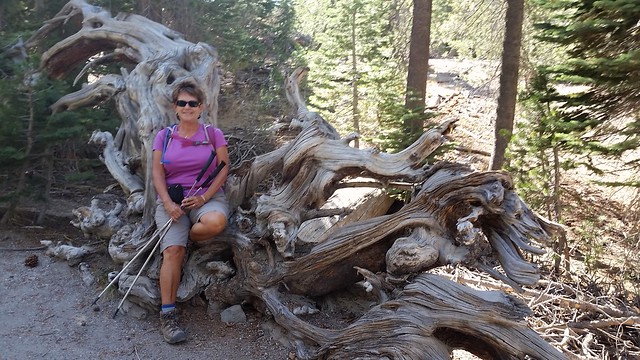 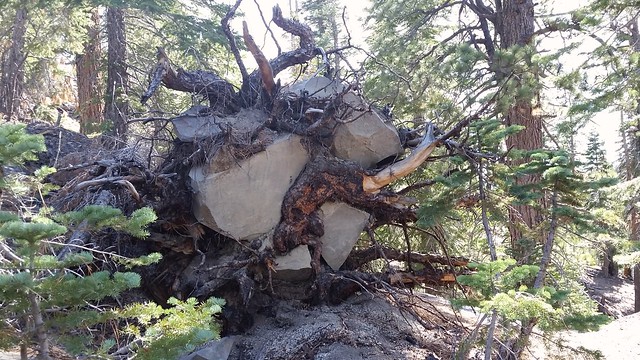 We hiked a trail to the top of the formation where glaciers polished the tops of the columns, giving the appearance of a nice rock patio. 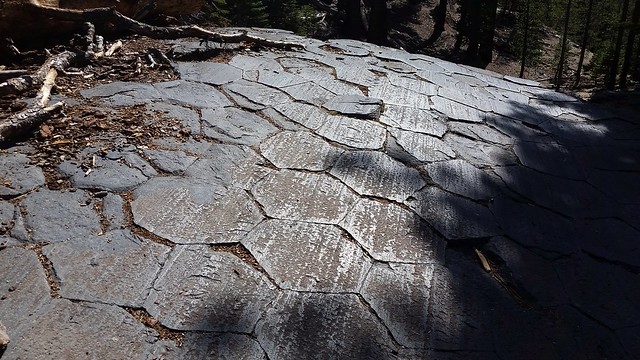 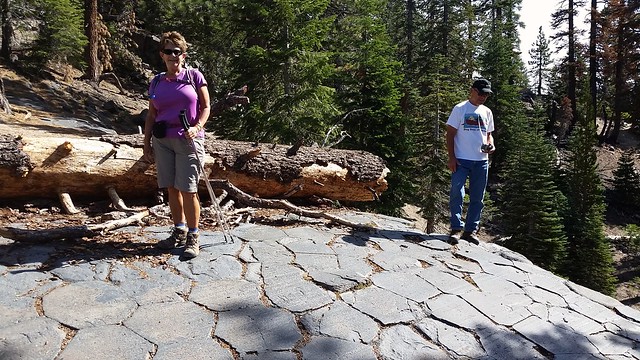 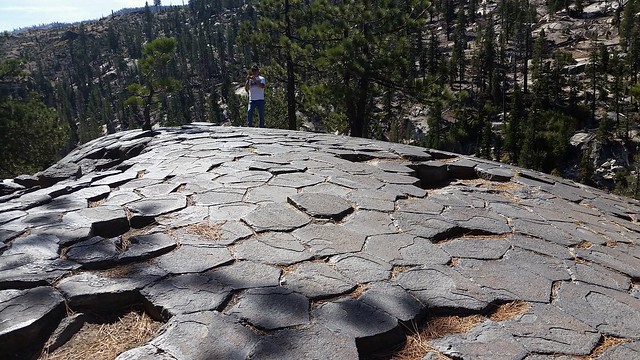 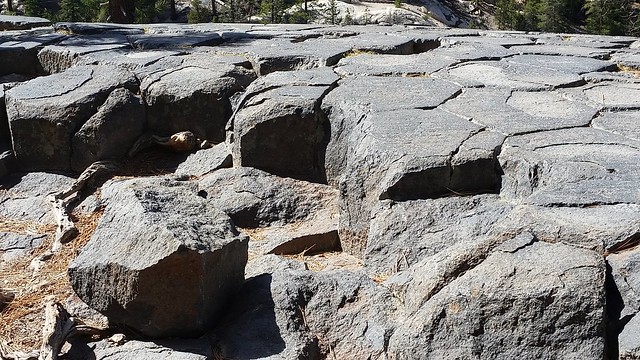 Snowy mountains in the distance provided some beautiful scenery on the drive back down the mountain. 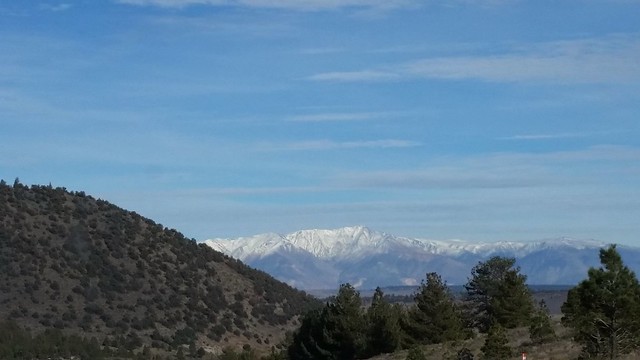 Dave and Sue joined us for dinner at the Mono Inn, just north of Lee Vining on the western shore of Mono Lake.  As we enjoyed our dinner the setting sun lit up the eastern shore of the lake for just a brief few minutes. 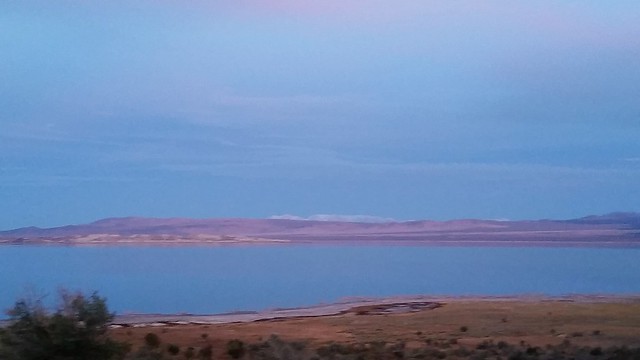