Posted on October 8, 2015 by placestheygo

Thirty miles north of Lee Vining is the ghost town of Bodie, known today as Bodie State Historical Park.  Bodie began as a mining camp of little note following the discovery of gold in 1859 by a group of prospectors, including W. S. Bodey.   Bodey died in a blizzard the following November while making a supply trip, never getting to see the rise of the town that was named after him.   According to local lore the town’s name was changed from “Bodey,” “Body,” and a few other phonetic variations, to “Bodie,” after a painter in the nearby boomtown of Aurora, lettered a sign “Bodie Stables.” 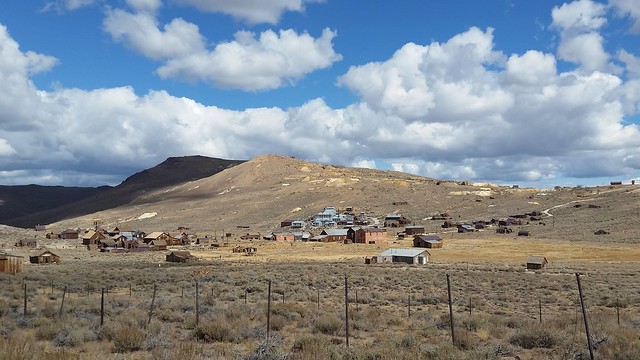 The ghost town of Bodie

Mining in the district progressed at a slow pace until 1875 when a mine collapse revealed a rich body of gold ore.  Bodie was soon transformed from an isolated mining camp comprised of a few prospectors and company employees to a Wild West boomtown.   By 1879, Bodie had a population of over 7000 people and around 2,000 buildings.   Over the years, Bodie’s mines produced gold valued at nearly $34 million.  The boom years were over quickly as unsuccessful mines began to close.  The population dropped quickly and continued to dwindle into the 1900s.  Mining continued until 1942.  The family of Bodie’s last major landowner hired caretakers to watch over the town and protect it from looters and vandals.  In 1962 California State Parks purchased the town to preserve the historical buildings. 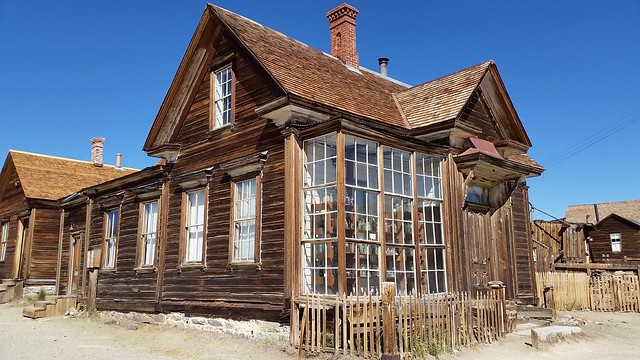 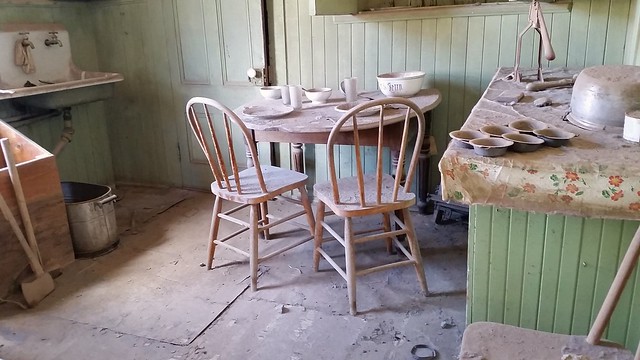 The kitchen of a residence (looking through a window)

Two major fires and years of decay have destroyed most of the town, but about a hundred buildings remain, many with the contents inside them left intact as if the owner just walked out and left them there.  The town is preserved in a state of “arrested decay.”  This means that building roofs, windows, and foundations are repaired and stabilized, not restored. 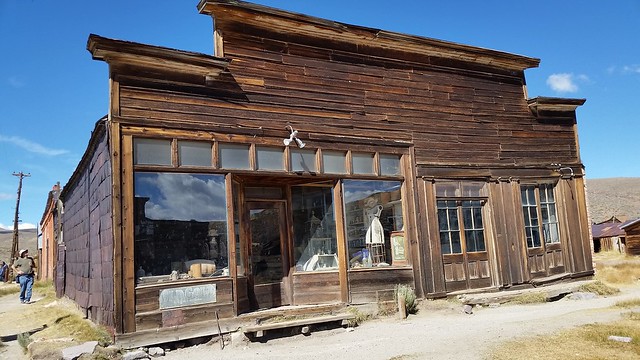 The Boone Store and Warehouse

One of two morgues in the town still has new caskets visible through the windows. 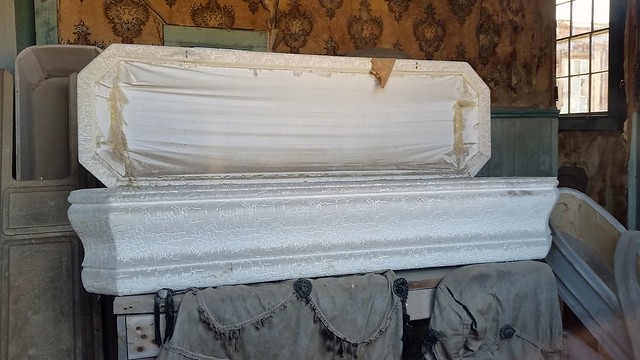 The Miners’ Union Hall now houses a small museum and bookstore.  We had never heard of a “Weeping bottle” before and found it to be very interesting. 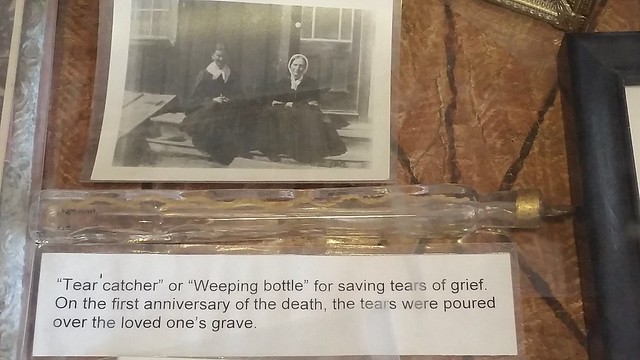 At the town’s peak 65 saloons lined Main Street, which was a mile long. Murders, shootouts, barroom brawls, and stagecoach holdups were regular occurrences.  One of the remaining saloons has a pool table visible through the window with the cue sticks still sitting on top. 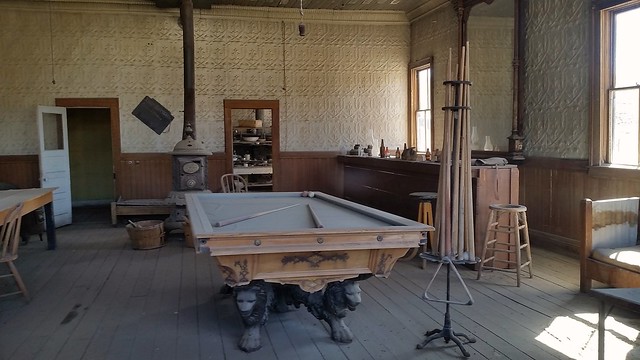 Up the hill on the edge of town is the remains of the Standard Stamping Mill.  The Standard was the most successful of thirty mining companies operating in the Bodie Mining District.  Heavy iron rods, known as stamps, broke up quartz rock containing gold and silver.  Mercury (and later cyanide) was used to separate the metals from the crushed rock. 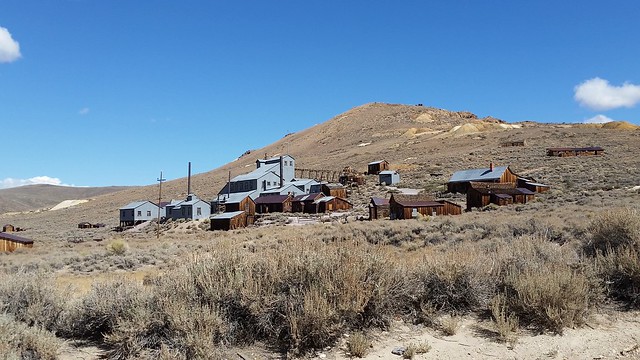 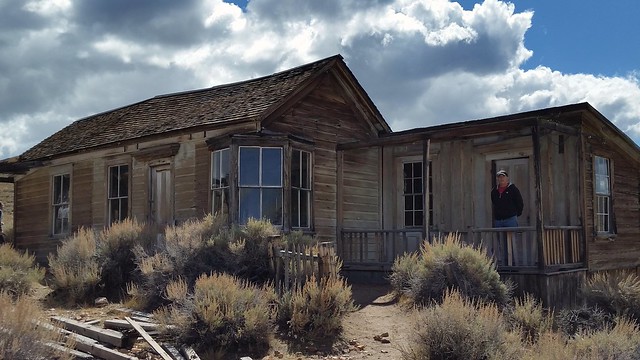 The Burkham House with an elegant bay window

Apparently people in Bodie were not too concerned with the views from their porches.  The Burkham House pictured above has a nice porch in the front.  The view from that porch is in the photo below. 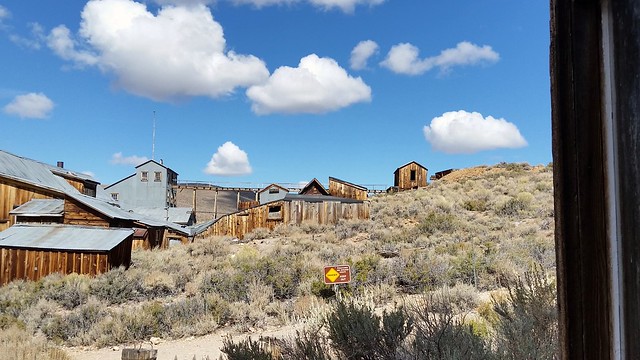 There is no porch on the back but maybe there should have been one.  If there would have been one, the view would be better than the one in the front of the house facing the stamping mill.   The photo below shows the view from the back of the house.  It’s difficult to see in the photo but there are beautiful snow-covered mountains in the distance. 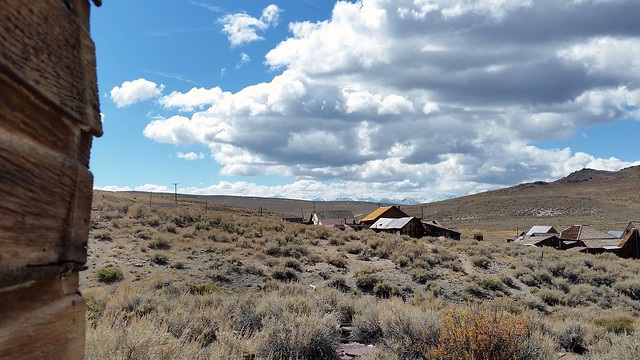 Mountain view from the back of the Burkham House

All that remains of the town bank is the brick safe room with a large safe visible through the lower part of the door. 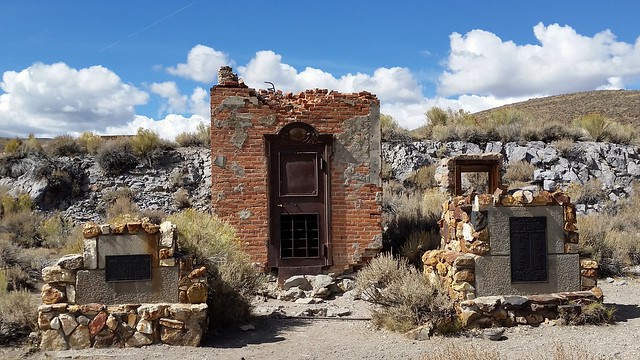 Remains of the Bodie Bank

Originally a lodging house, the building pictured below became a school after the first school was allegedly burned down by an early day juvenile delinquent.  In 1879-80 the school saw its highest enrollment of 615 students.  It closed in 1942. 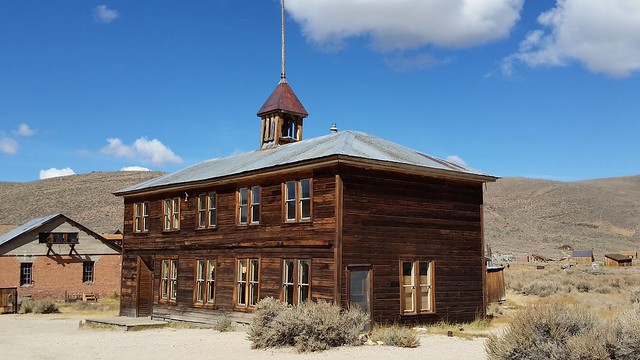 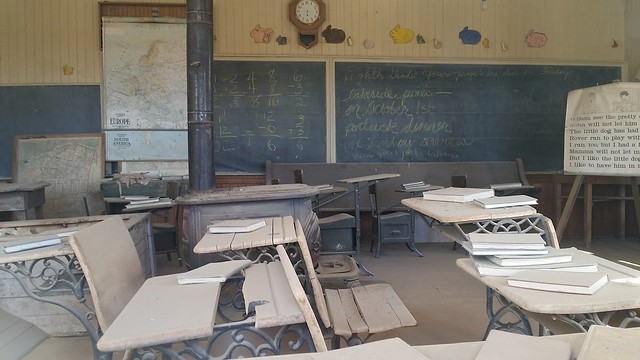 The cemetery is on a hill overlooking the town.  A group is in the process of identifying unmarked graves and replacing grave markers with wooden markers used in the early years of the town. 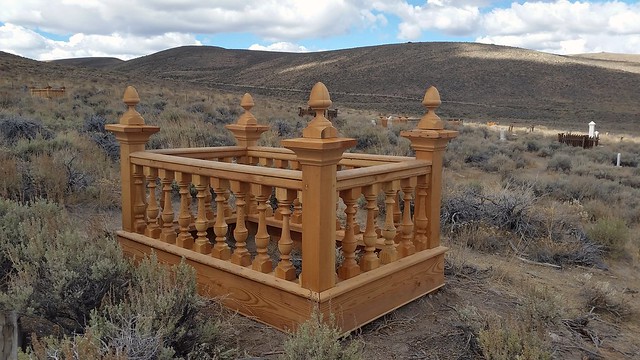 The cemetery is still considered active, as the last person was buried there in 2003.  Bobby Bell was born in Bodie in 1914 and lived there most of his life.  He was one of the last residents and helped stabilize some of the buildings in the 1960s and 70s.  His grave marker reads “Hello God, I’ve just arrived here from Bodie.  I am the Last of the Old Time Miners.” 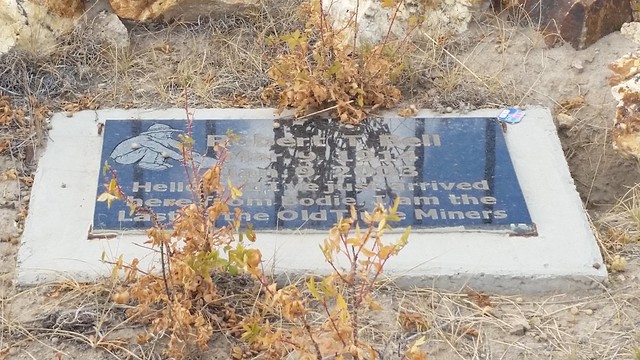 OK, that’s enough history.  Tomorrow the nimble hiker has a little “walk” planned near June Lake.  More on that late . . .