Posted on October 4, 2015 by placestheygo

Between motorhome repairs and rainy days (desperately needed here) we did manage to get in two short hikes in the area, one near South Lake Tahoe and the other just outside Carson City.  We learned about the first hike from Hans and Lisa (Metamorphasis Road) who were here in the spring of 2014. The Glen Alpine Trailhead is located next to small Lily Lake just south of Lake Tahoe.  On the way to the trailhead we stopped along the southern shore of Lake Tahoe where the effects of the drought are definitely visible.  Our overcast day didn’t make for the best photos. 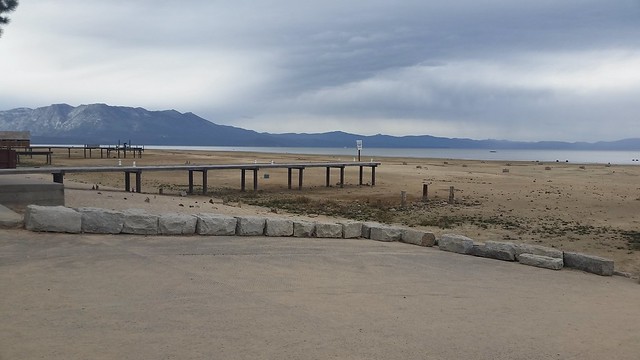 To get to the trail we drove past the community of Camp Richardson and turned south on Fallen Leaf Road.  The road went along the eastern shore of the beautiful Fallen Leaf Lake. 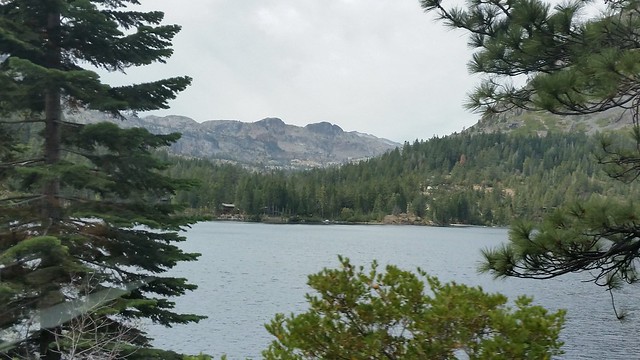 Just beyond the lake we passed a waterfall with just a trickle of water.  We recognized the rocks from a photo Hans and Lisa had put in their post during their visit. 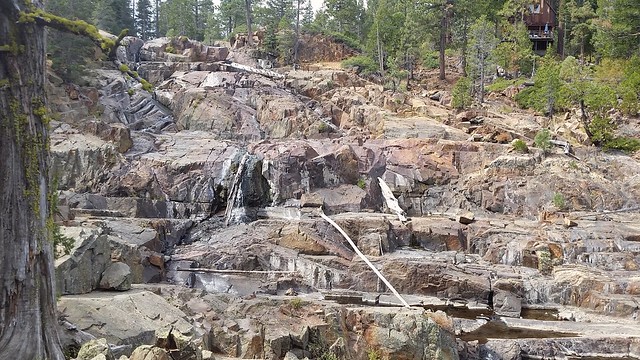 The falls during our visit

Their visit was in the spring when there was just a bit more water in the stream.

The falls when Hans and Lisa were here (photo by Lisa)

As we passed the falls the road narrowed to one lane, but remained paved all the way to the trailhead. 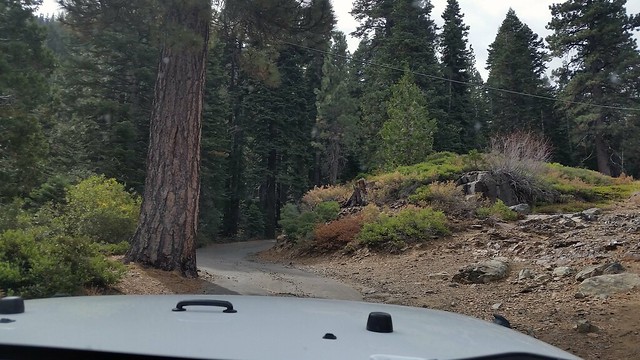 We parked in the lot at the end of the road next to Lily Lake and hiked a little over a mile up a much worn gravel road to the site of the former Glen Alpine Springs Resort. 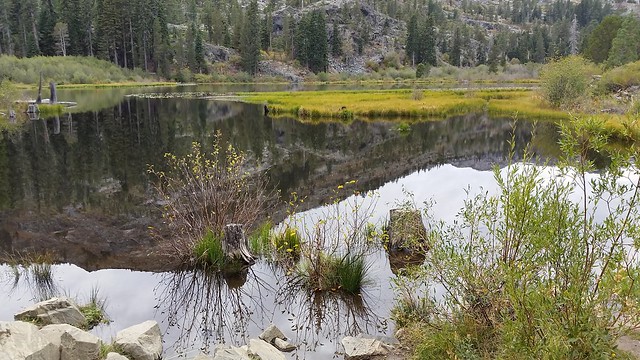 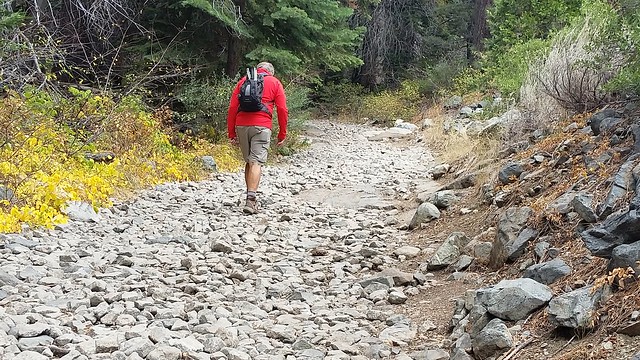 Heading up the “trail”

Discovered in 1863, Glen Alpine Springs opened as a campground in 1878, and in 1884 the resort’s buildings were constructed. The resort became extremely popular in the 1920s and continued to operate until 1966. 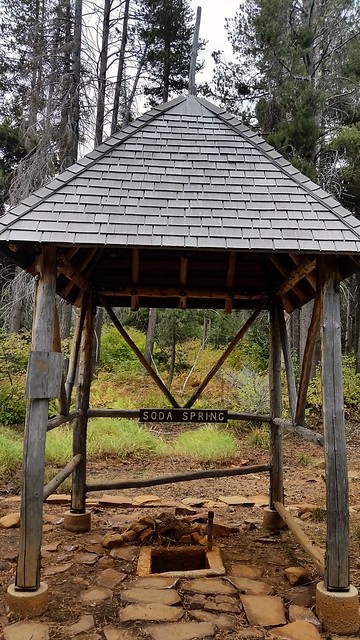 The brown waters of the nearby spring are full of iron and carbonic acid, which back in the 1920s was considered a healthy fizzy drink. 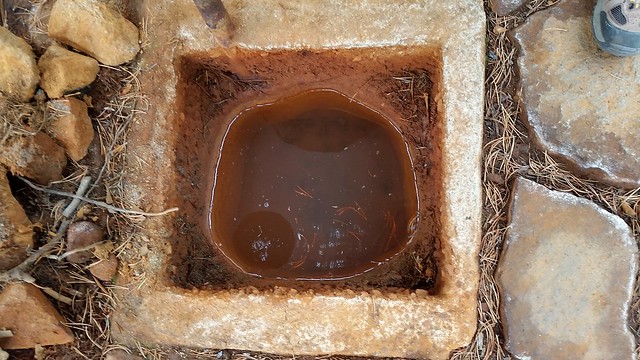 Glen Alpine Springs was a backwoods resort that was far from most of the influences of civilization.  Most of the accommodations were tent cabins that no longer exist. There was also a hotel and a post office that are both gone.  The structures that still exist are in reasonably good condition. These include three cabins, a kitchen, dining hall, stable, caretaker’s cabin and an assembly hall.  Today a non-profit corporation, the Historical Preservation of Glen Alpine Springs, Inc. works with the Forest Service to preserve the site.  Guided tours are conducted at 1 pm on Saturday and Sunday mid-June to mid-September. 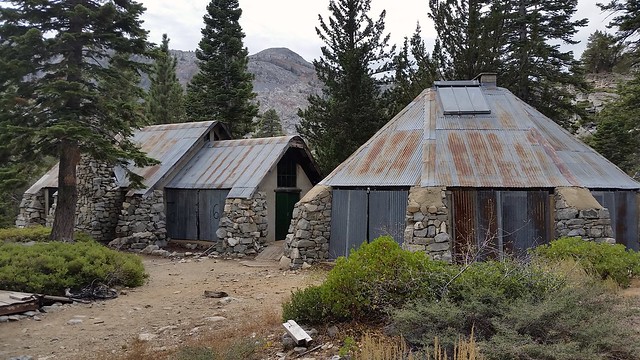 The dining room on the left and kitchen on the right 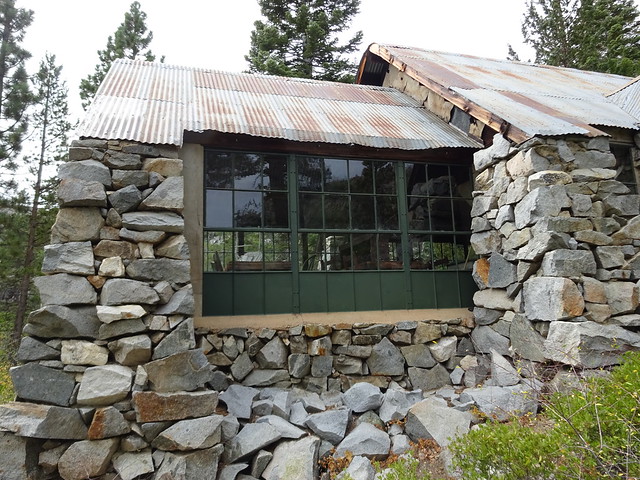 Part of the Dining Room 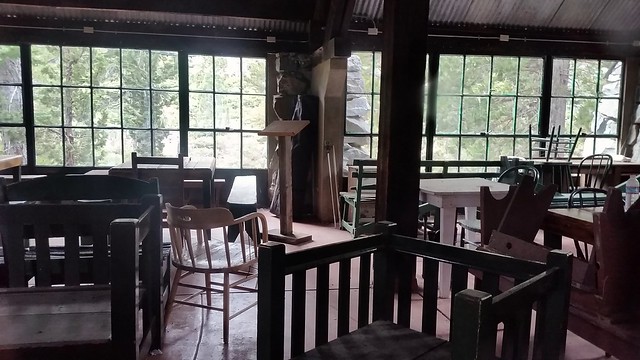 Peaking in a window 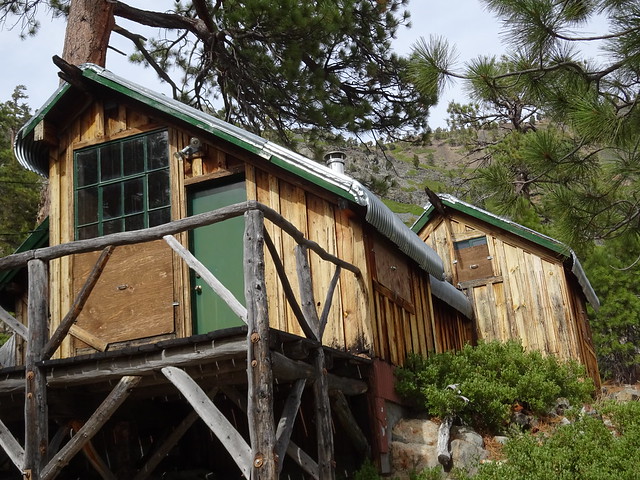 One of the remaining cabins

A few days later we did a short hike on a new trail in the hills just west of Carson City.  The Kings Canyon/Waterfall Trail just opened in August.  It’s a great seven mile biking/hiking trail on the hills overlooking Carson City. 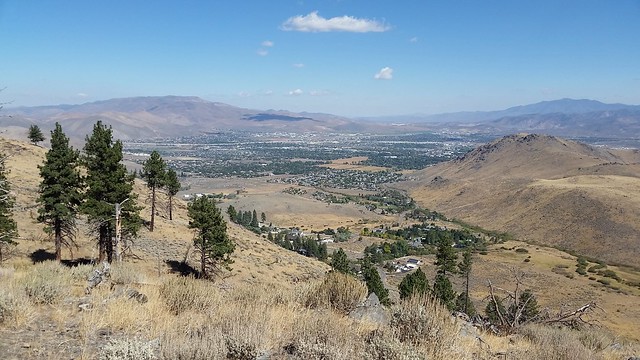 The trail winds through hills that burned in a fire in 2005. 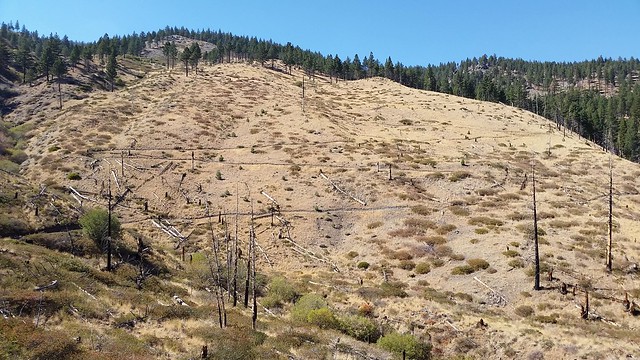 The switchbacks up the second mountain

As we hiked we noticed a group keeping an eye on us on a hillside above. 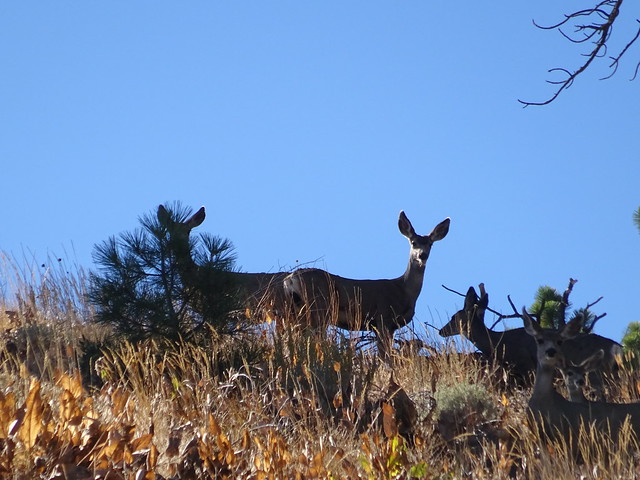 The burned trunks of Ponderosa Pines emitted a very enjoyable odor as we hiked through a wooded area. 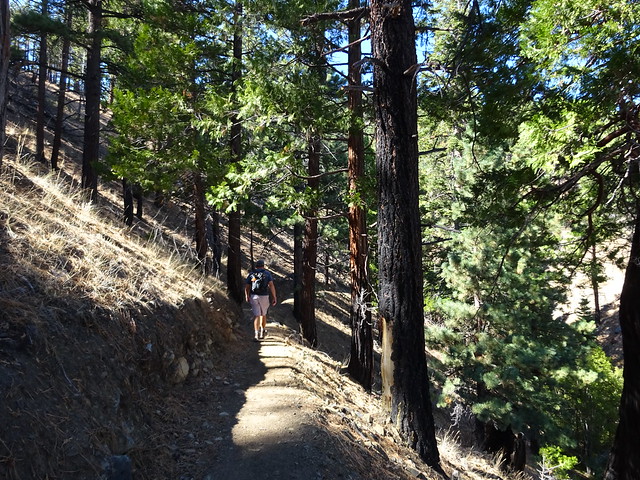 After a little over a mile and a half we came to the Kings Canyon Waterfall, filled with water from our .5 inch of rain the previous day. 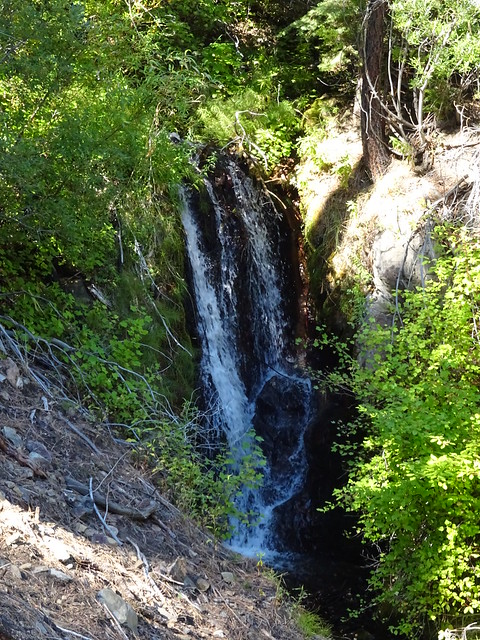 We crossed the creek and continued up the trail to another trailhead, where we turned around and headed back. 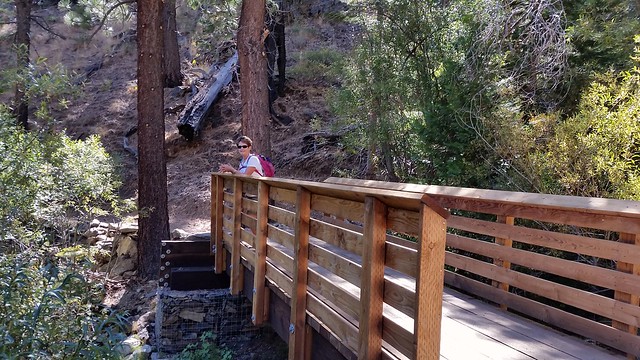 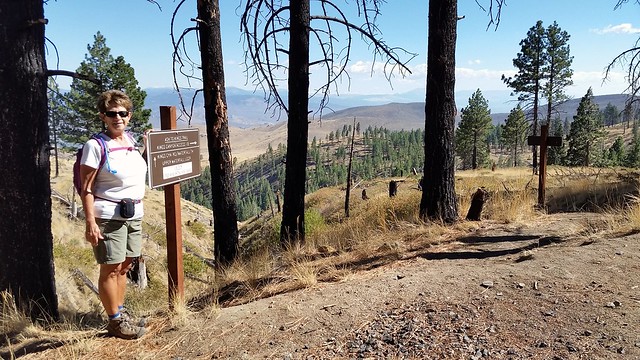 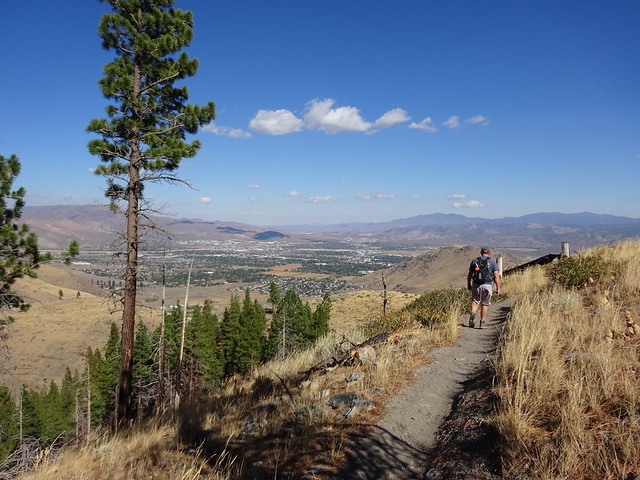 We cut our hike short so we could return to the RV park (Silver City RV Resort) as we knew that friends would be arriving during the afternoon.  Dave and Sue (Beluga’s Excellent Adventure) reserved the site next to us and will join us as we head south into the eastern Sierras this week.  Fellow bloggers Bill and Jodee (On the Road Abode) also arrived and took the site next to Dave and Sue.  While we read each others blog we had never met Bill, Jodee, and Tessa and looked forward to the opportunity to share some time together. 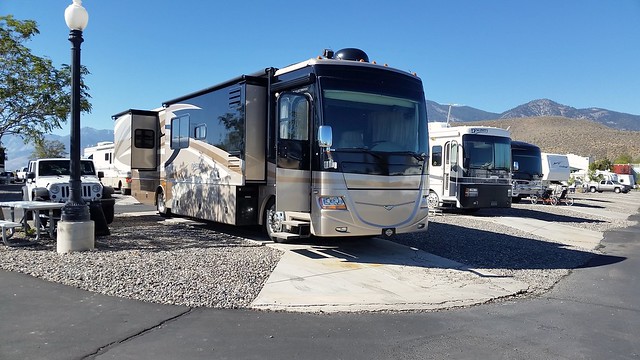 The three motorhomes in a row

The group enjoyed dinner together in Carson City at the Lake Tahoe Brewery and shared a couple of “happy hours” in the late afternoon.  For one of the happy hours we were joined by Denny, who was in the travel trailer across from us. 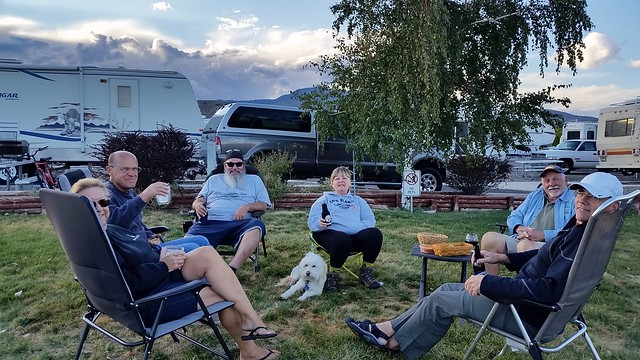 Tomorrow we’ll head south along US-395 with Dave and Sue.  This scenic drive has been on our radar for quite some time so we’re anxious to head south.  More on that later . . .

12 Responses to Hiking Near Carson City