Posted on September 14, 2015 by placestheygo

We have wanted to visit Dinosaur National Monument for awhile now, but it never seems to be on any of our travel routes.  Since it is within reasonable driving distance, we decided to make the drive while here near Flaming Gorge.  So Saturday we were up early (for us) and on the road heading back east on UT-44.  At its intersection with US-191 you turn to the north to go to the Flaming Gorge Dam.  But we turned south headed for the town of Vernal (pop. 10,800).  As we drove through town we were impressed by the baskets of Petunia’s that lined the main street. 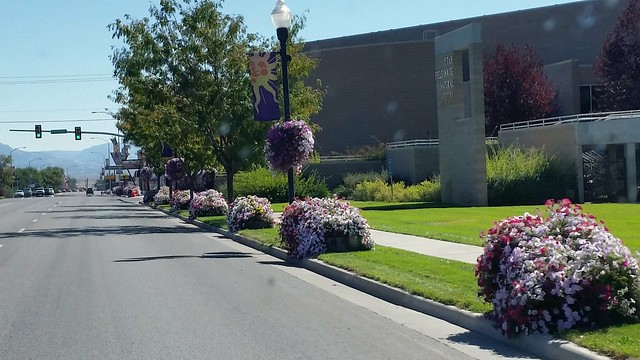 In the center of Vernal we turned to the east on US-40 and drove about twelve miles to the road leading to the Dinosaur National Monument Visitor Center. 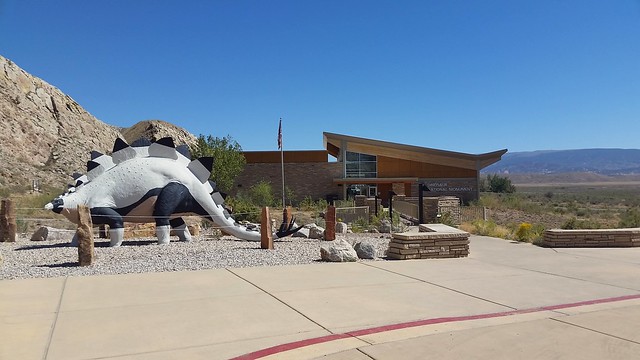 This park contains over 800 paleontological sites and has many dinosaur fossil beds.  The dinosaur fossil beds were discovered in 1909 by Earl Douglass, a paleontologist working and collecting for the Carnegie Museum of Natural History.  He and his crews excavated thousands of fossils and shipped them back to the museum in Pittsburgh for study and display. Many of the fossils are now displayed at museums around the country.  They will be labeled Jensen, Utah.  President Wilson proclaimed the dinosaur beds as Dinosaur National Monument in 1915.

We entered the visitor center and immediately heard an announcement that the shuttle to the Quarry building was preparing to depart, so we quickly hopped aboard.  This open air shuttle takes visitors up a road closed to the public for about a mile to the Quarry Exhibit Hall.  The building is designed to cover the south side of a rock outcropping containing hundreds of bones that have been partially exposed.  The rock is called the “Wall of Bones.” 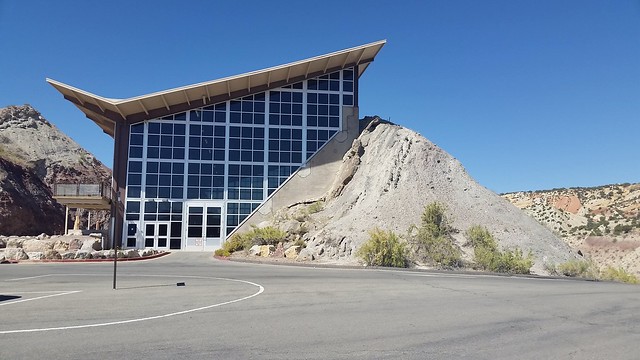 The building contains two viewing areas, a balcony where you can view the bones on the upper part of the wall, and the main floor where you can touch some of the bones. 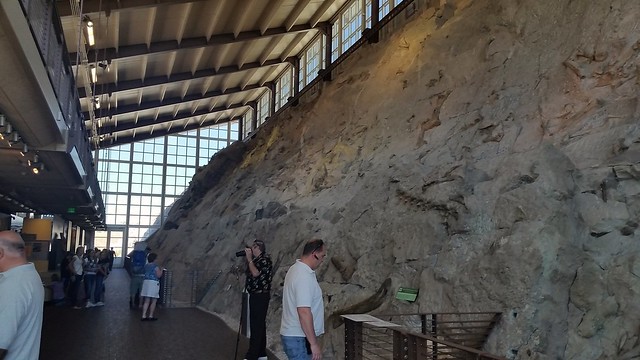 The “Wall of Bones” 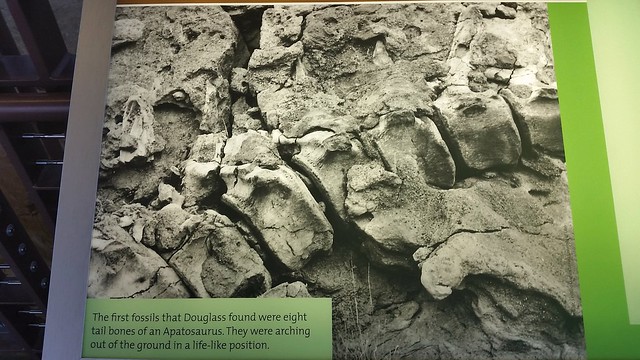 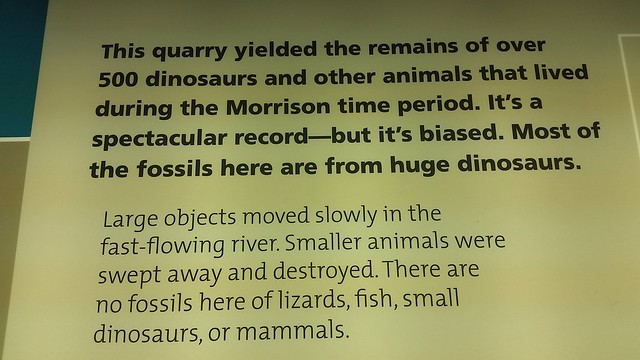 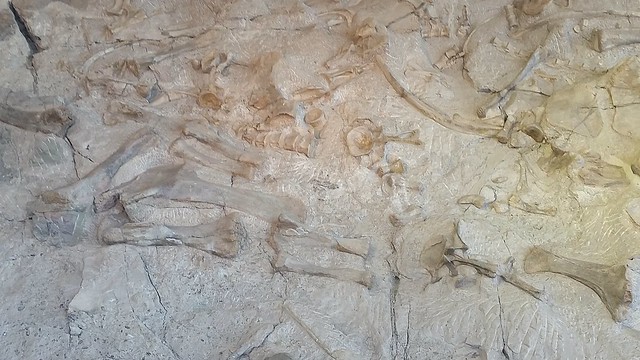 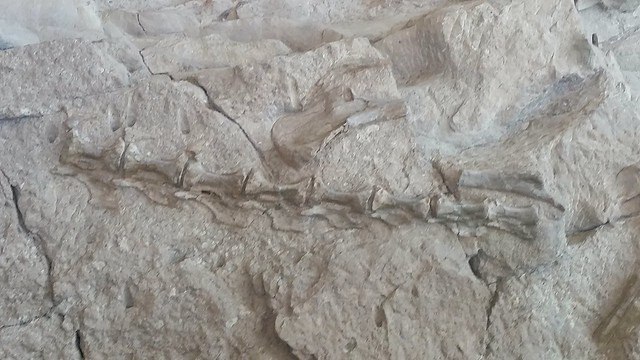 You can ride the shuttle back down to the visitor center or hike back on the one mile Fossil Discovery Trail.  We opted for the trail. 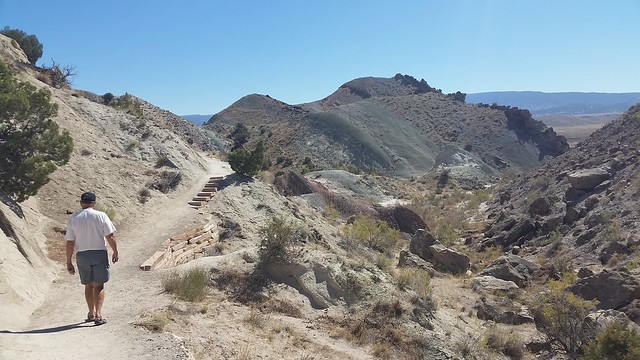 The trail takes you by a couple of petrified bones and fossils in the rocks. 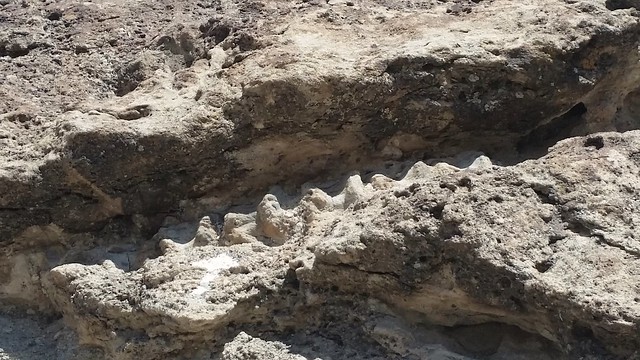 As we hiked near the ranger living quarters, we notices what at first appeared to be a dog in the yard.  We quickly realized it was a coyote looking for lunch.  Speaking with a ranger we learned he hangs around the compound frequently.  Apparently rabbits like to munch on the grass near the compound and the coyote likes to munch on the rabbits. 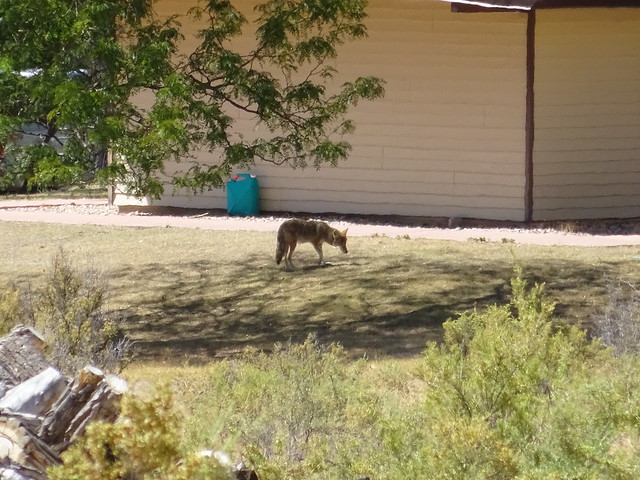 After checking out the visitor center, we secured a guide book (for a dollar) and drove on to Cub Creek Road, a 10 mile long paved and dirt road that provides a scenic drive along the south face of Split Mountain.  There are examples of Indian petroglyphs and pictographs and interesting rock formations along the road. 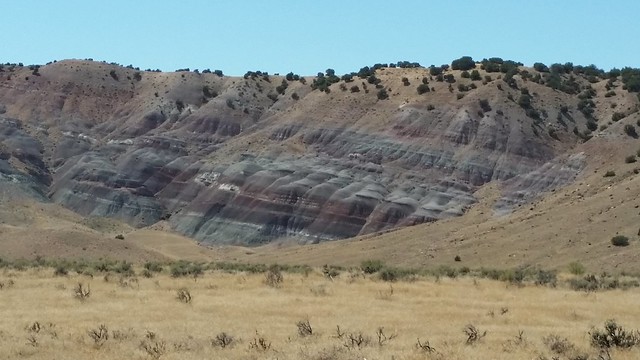 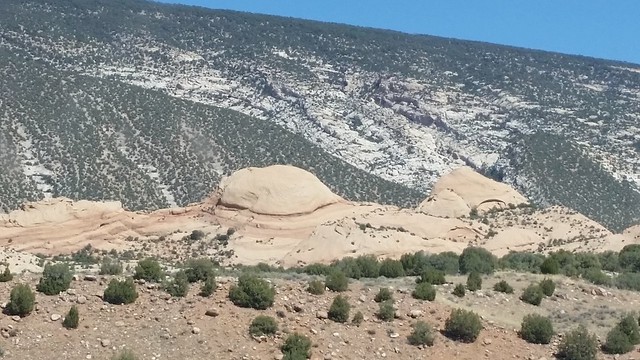 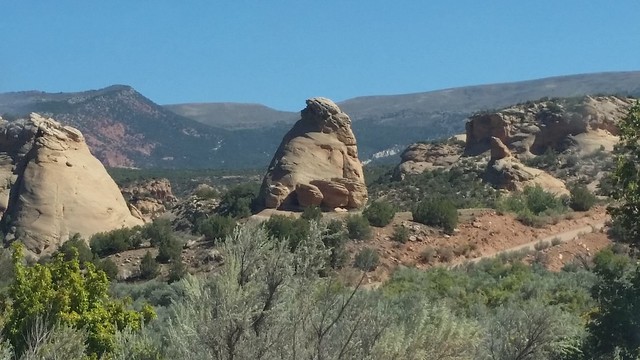 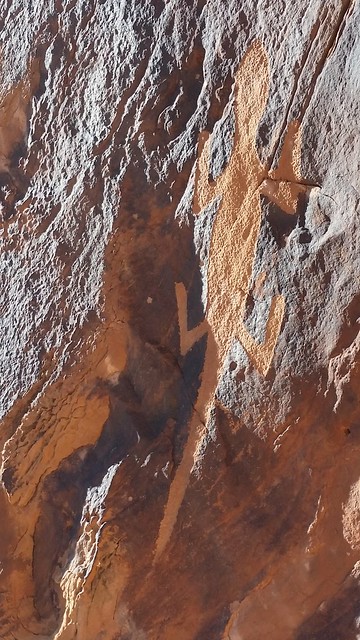 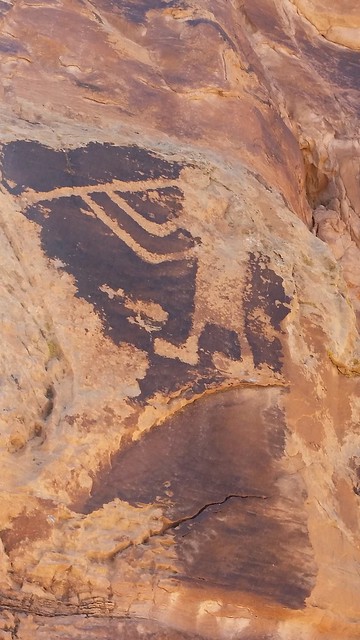 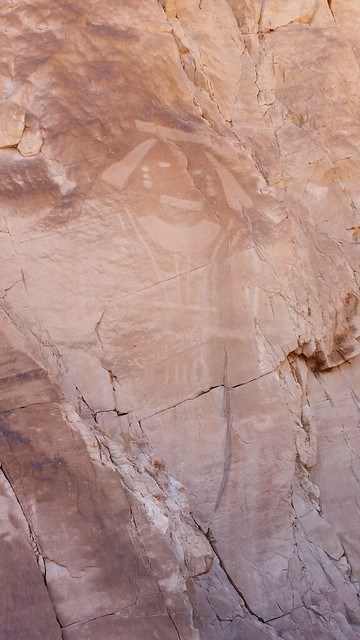 Cub Creek Road ends at the Josie Morris Ranch Complex.  Morris was a colorful local character, married five times and divorcing four of her husband.  At the age of forty she moved out to the canyon where she build a ranch. She lived there alone in a cabin for over fifty years until she fell on ice and broke her hip in 1963.  She died the following year at the age of 90.  Morris was tried and acquitted for cattle rustling in her 60s and made brandy and wine from local fruit and berries during Prohibition. 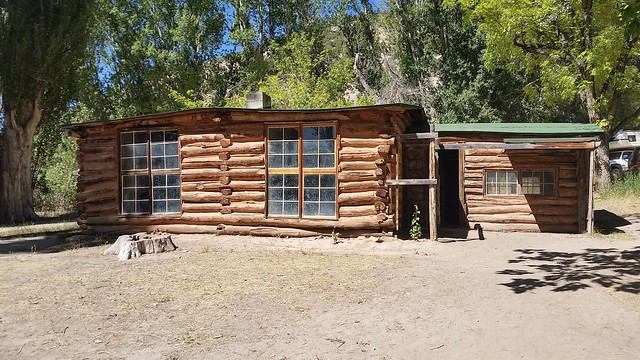 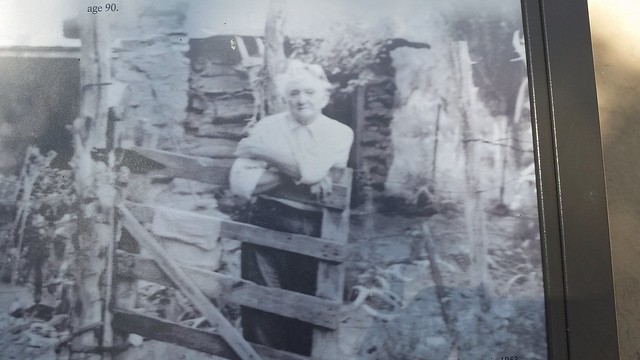 On our drive back to Manila we made a stop to visit the Moonshine Arch (Day Trip 12 brochure picked up at the dam), located six and a half miles north of Vernal.  Once we found the left turn off the highway (a bit hard to find), we drove about a mile on a dirt road to a parking area.  If you have a high clearance vehicle you can continue for another half mile, but a deep ravine in the road right next to the parking area discouraged us from driving, so we parked where the brochure suggested and hiked to the arch. 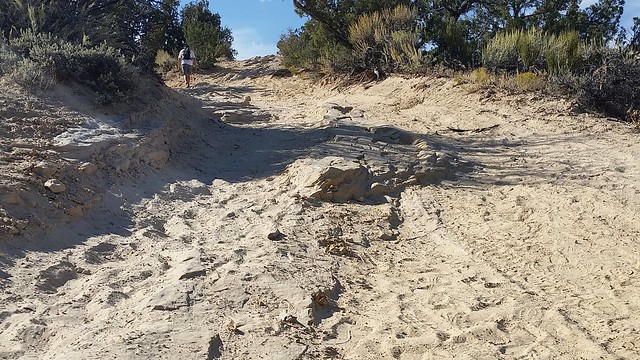 One of the high clearance sections of the road

The hike from the parking area is about a mile long through loose sand then going steeply up some slickrock.  But the cool arch makes the effort worthwhile. 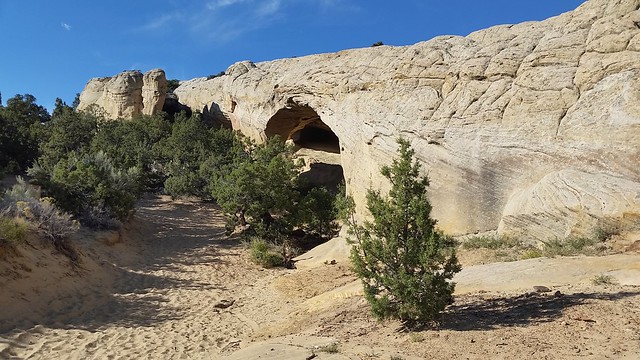 The Moonshine Arch is about 85 feet long and about 40 feet high. 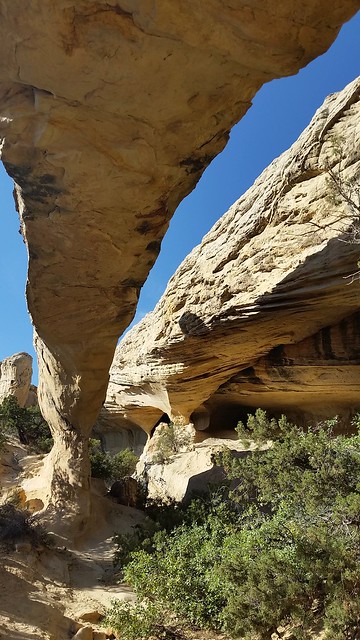 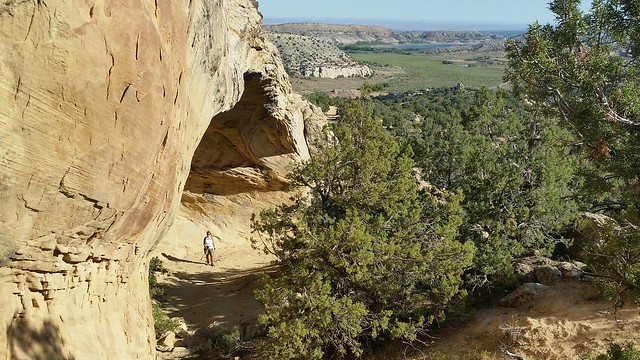 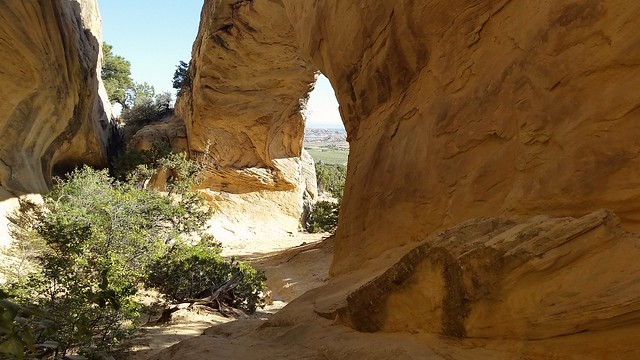 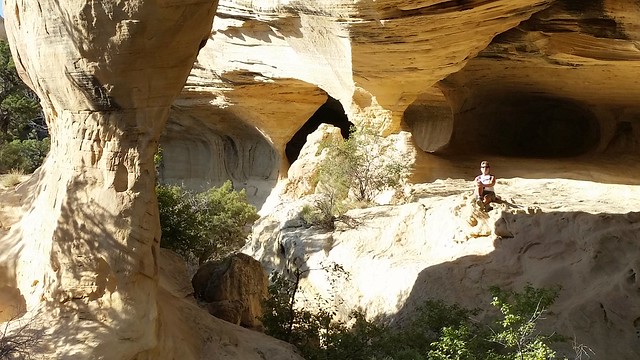 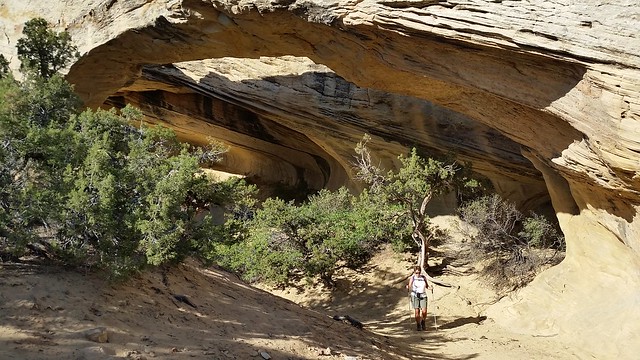 It was a long drive (90 miles one way)  but the visit to Dinosaur Monument and the Moonshine Arch made it worthwhile.  And the great scenery along the way made the drive a bit easier.