Posted on September 13, 2015 by placestheygo

The Uintah County Travel and Tourism Organization publishes a series of day trip brochures for the county.  Each brochure provides information for points along the trip with each point identified by mileage from the start of the trip.  We found the brochure for Day Trip 8,  Sheep Creek Canyon Scenic Backway, at the Flaming Gorge Dam Visitor Center.  The Backway is a ten mile long paved loop that travels through a beautiful canyon We entered it at its western junction with UT-44, just under five miles from Manila. 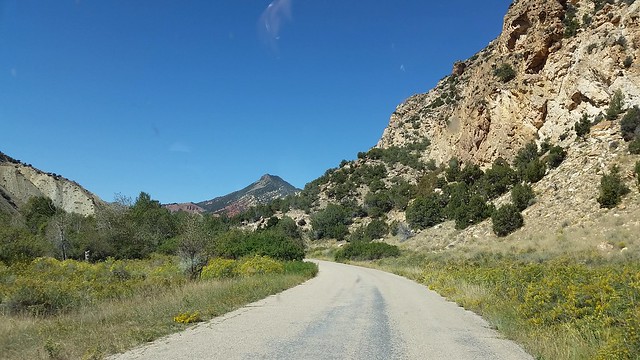 One of the first spots of interest is the grave of Cleophas Dowd, an early homesteader in the area. 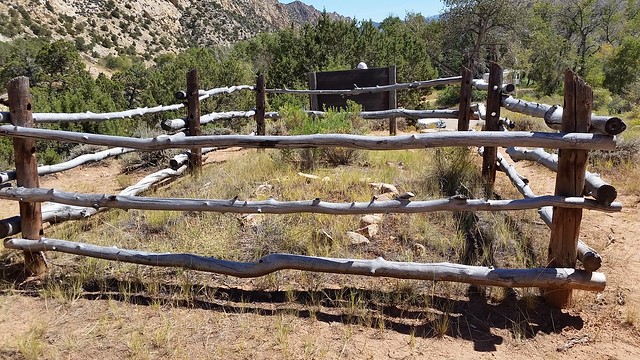 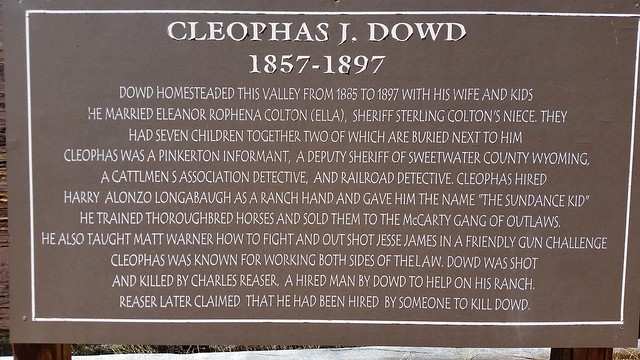 We passed some of the normal wildlife you would expect to see in this area. 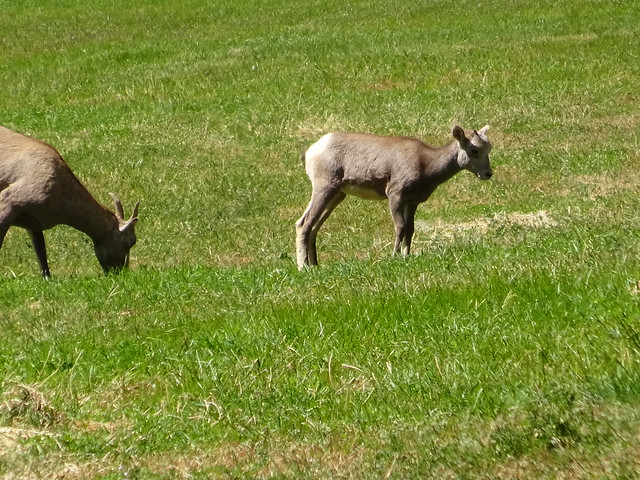 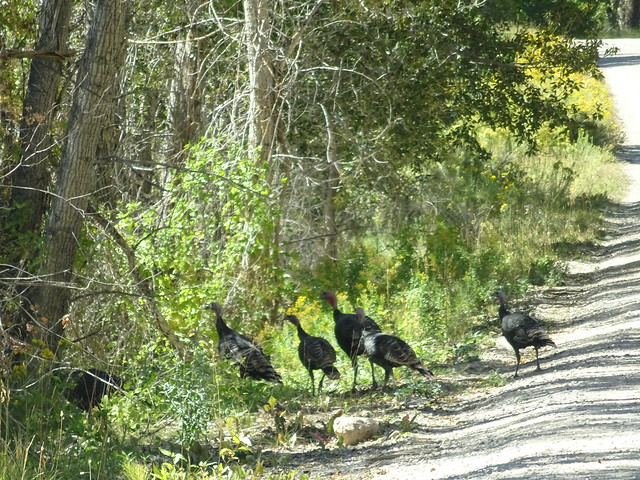 But as we passed the only working ranch along the loop we spotted an animal that you would not expect to see in Northeastern Utah! 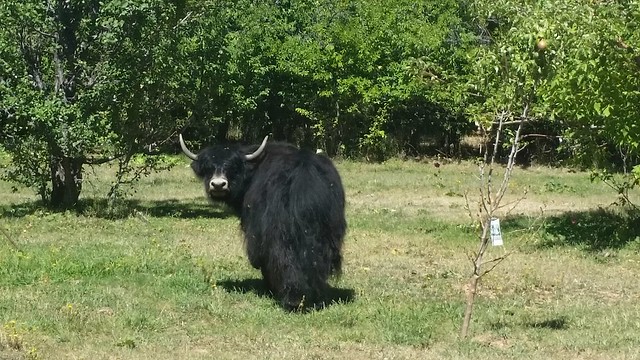 Domesticated yaks have been kept for thousands of years, primarily for their milk, meat, and as beasts of burden.  Yak meat is a dark red meat that is naturally very lean, nearly 98% fat free.  We’re guessing that is the purpose for raising these two guys here. 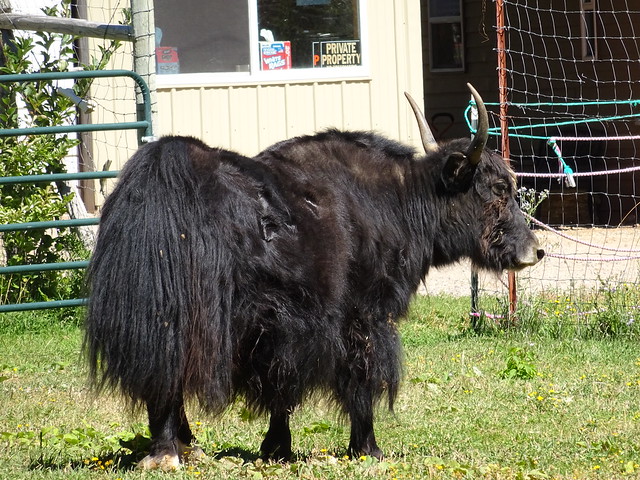 The road then continued through some beautiful geological formations. 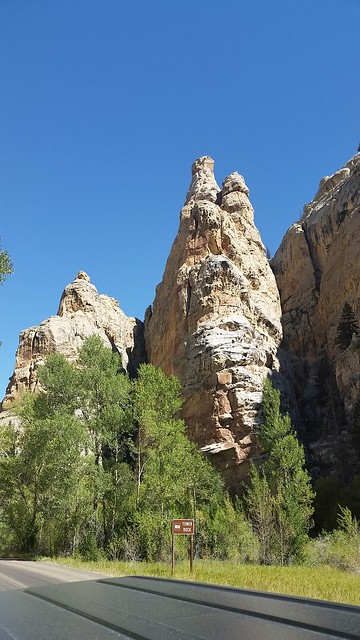 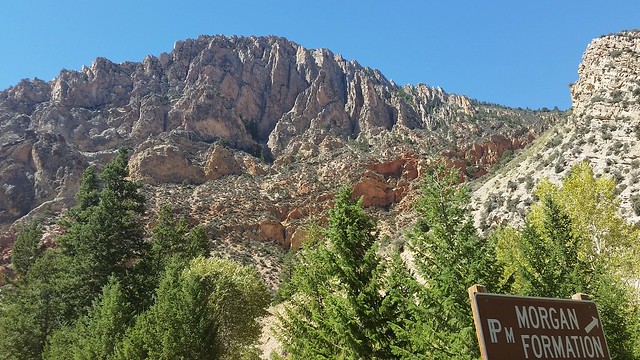 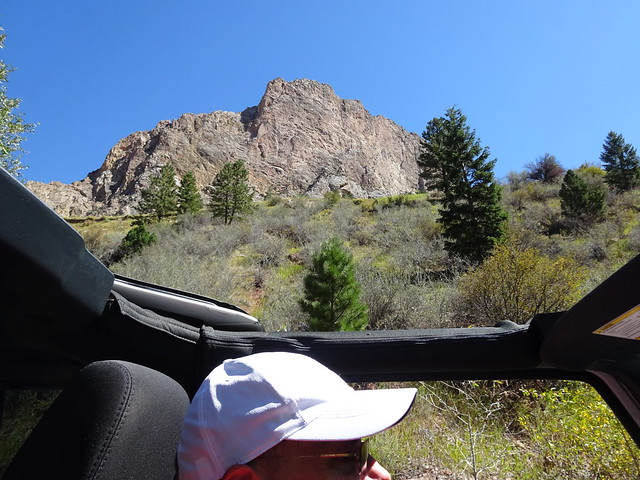 Along the way we came to the Palisades Memorial Picnic Grounds.  There is a large boulder there with a plaque mounted on it. 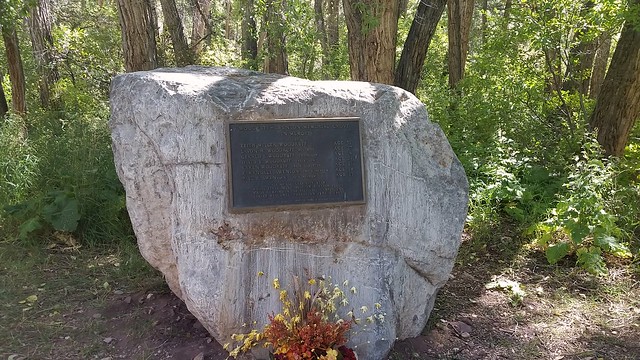 At one time the area was a small campground but in 1966 a group of campers were killed during a flash flood that rampaged through the canyon in the middle of the night.  They were the only ones camping that night. 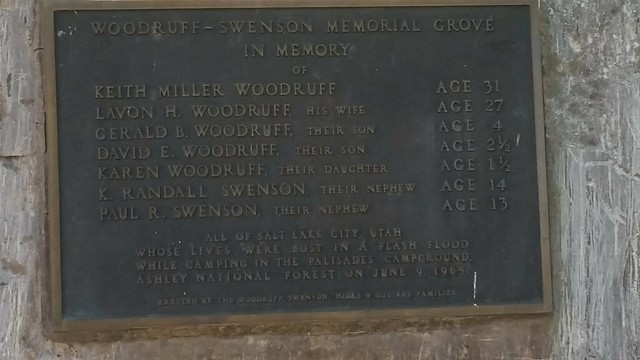 At one time there was a little reservoir way up above Sheep Creek, on the plateau level above the canyon. An extremely heavy snowpack and heavy rainfall in a short period of time caused the dam on this little reservoir to give way.  As far as could be determine, a 15 foot wall of water, rocks and trees washed down the canyon and through the campground. It took weeks of searching to find the remains of the campers but the body of thirteen year old Paul was never recovered.

As the road gained in elevation we could see Aspens in the distance beginning to turn colors. 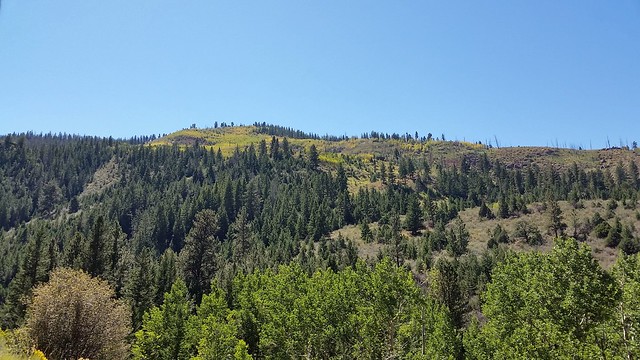 After a few miles we turned on to a dirt side road that leads out to Browne Lake.  The lake is really a small reservoir with some dry camping spots.  The road into the camping area was a bit rough so we were very surprised to spot a school bus parked there, complete with driver sitting inside.  We didn’t see anyone else but it must have been some sort of field trip from Green River, WY.  If you read about a missing group of students from Wyoming let us know so we can contact the authorities! 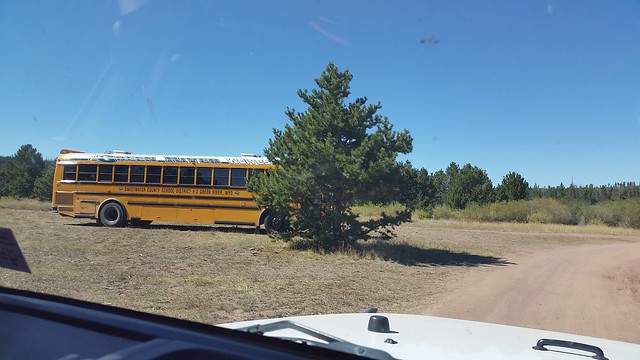 We turned on to another side road for a visit to the Ute Mountain Fire Lookout Tower, built by the CCC in the 1930s.  A sign at the base of the hill said the tower was open for visitors, but when we arrived the two young rangers there were packing up, obviously in a hurry to leave.  One of them told us that they just received a call to go to California to fight forest fires, but she would hold off locking the tower for a few minutes so we could go up and check out the view.  We thanked her but declined the offer so they could hit the road. 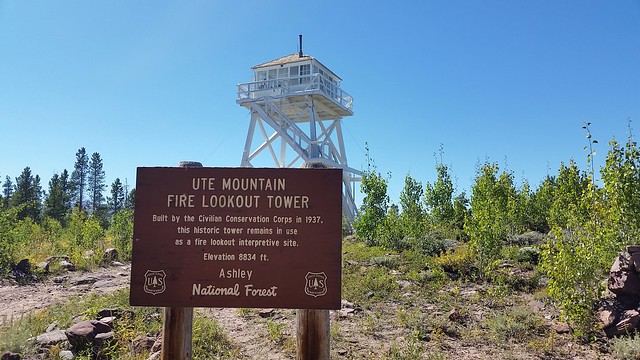 One of the most prominent fish in the Flaming Gorge Reservoir is Kokanee salmon, a species of sockeye that live in lakes.  The Kokanee were introduced into the reservoir in the 1960 and are thriving.  As with all salmon they go up into feeder streams to spawn.  During our visit to the Red Canyon Visitor Center earlier in the week, the ranger there told us this was spawning season.  She said a great place to see them fight their way upstream was at a Nature Trail on UT-44 across from where we entered the Sheep Creek Canyon loop.  So after we exited the loop and headed back west to Manila, we stopped there to see if we could spot any salmon.  We stood on a foot bridge over the creek near the parking area for quite a long time without spotting any fish of any species.  But after a bit our patience was rewarded when the nimble hiker’s sharp eyes spotted two red objects working their way upstream.  We lost view of one of the salmon but the other fought his (we think it was a male) way through the strong current and passed right under us. 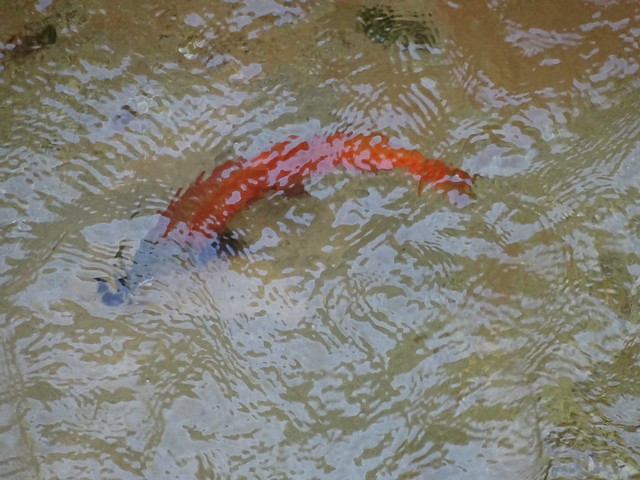 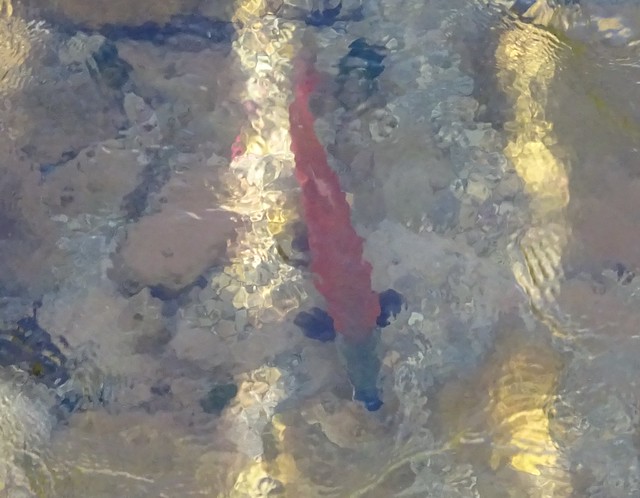 Next up for us is a long drive to Jensen, UT to visit Dinosaur National Monument.  More on that later . . .

Leave a Reply to The Lowe's RV Adventures Cancel reply