Posted on September 2, 2015 by placestheygo

After visiting Omaha and Lincoln we continued our journey west along I-80.  After an overnight stay at a park along the highway in North Platte, we left the interstate at Ogallala and drove north on Hwy 26 to Robidoux RV Park in Gering, NE, just south of the town of Scottsbluff.  As we approached the Gering/Scottsbluff area we could see Chimney Rock to our west.  Rising nearly 300 feet above the surrounding North Platte River valley,  the spire served as a landmark for those traveling along the Oregon and Mormon Trails, which ran along the north side of the rock. 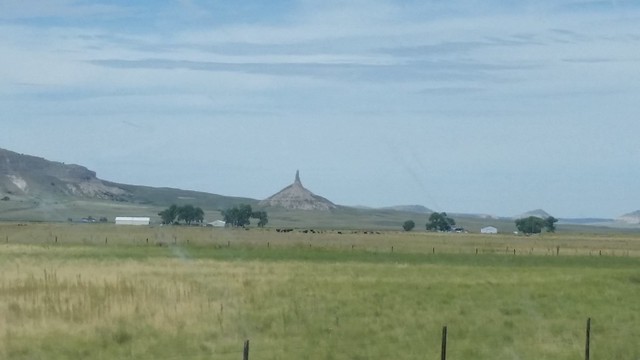 We planned to spend two nights here at Robidoux RV Park but the site is so nice we decided to extend our stay for a third night.  After that the park is full for the upcoming holiday weekend as there is a kite/balloon festival in an adjacent day use park.  Also, it turns out friends, Steve and MonaLiza (Lowe’s Adventures) will be arriving that day and have reservations for the week-end, so they may be the ones taking our site. 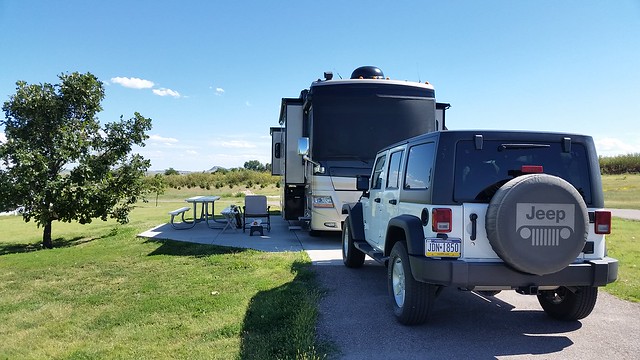 Our site is a long, paved pull-thru with a nice concrete patio.  Looking out our front window we have a great view of the nearby Scotts Bluff National Monument. 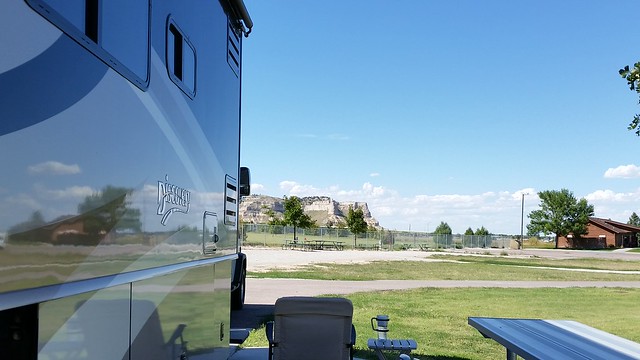 We came here to visit Scotts Bluff National Monument and that afternoon we headed over to check out the visitors center.  Scotts Bluff National Monument is a collection of five bluffs (steep hills) located on the south side of the North Platte River.  It is named for one prominent bluff called Scotts Bluff, which rises over 800 feet above the plains at its highest point.  You can drive a road to the top of the bluff or hike up on a mile and a half paved trail (guess which way we went).

The visitors center sits right along the Oregon Trail as it goes through a gap in the rocks called Mitchell’s Pass.  Part of the original pioneer trail is marked and has some reproductions of wagons used by the pioneers on display. 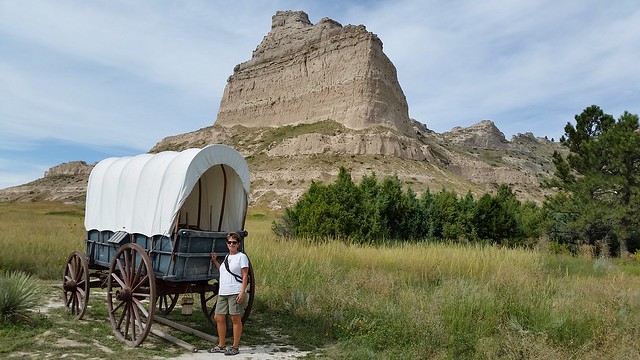 One of the displays is of a handcart used by some Mormon travelers.  While earlier groups of Mormons used wagons drawn by animals, in 1856, the church inaugurated a system of handcart companies in order to enable poor European emigrants to make the trek more cheaply.  The handcarts, two-wheeled carts that were pulled by emigrants instead of animals, were used as an alternate means of transportation from 1856–1860. They were seen as a faster, easier, and cheaper way to bring European converts to Salt Lake City.  Almost 3,000 Mormons, with 653 carts and 50 supply wagons, traveling in ten different companies, made the trip over the trail to Salt Lake City. 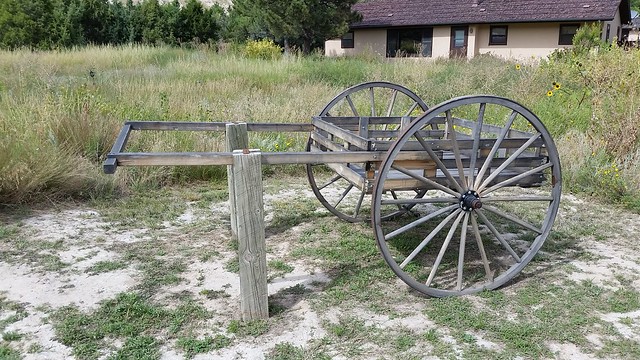 But no Mormons used the trail by the visitor center. They used their own trail to avoid persecution from other travelers.  The Mormon Trail ran along the north side of the Platte River, just a mile or so north of the visitors center, while the Oregon Trail ran on the south side.

In the visitors center we read the story of Rebecca Wilson, the daughter of a veteran of the American Revolution, and a Mormon traveling with her husband and young daughter headed for Salt Lake City.  She died of cholera near what is now the city of Scottsbluff. In 1899 a surveyor was in the area planning a route for a new railroad line. The surveyor came upon a broken iron wagon wheel standing upright in the sagebrush. On it was chiseled: “Rebecca Winters – age, 50 year.” The railroad retraced its survey line several miles, so the tracks would not pass over the grave of Rebecca Winters.   In 1902, her descendants put up a proper stone marker, which told more about her life. 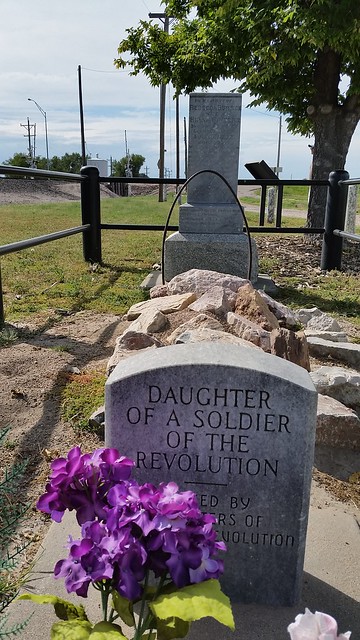 The grave of Rebecca Winters

Since 1899 someone from the Burlington Northern Railroad comes to the grave site twice a week and trims the grass.  CBS newsman Charles Kuralt featured the grave site in one of his “On the Road” segments in 1974.  He concluded the story with the following statement:

“We have been to the Great Tabernacle in Salt Lake City. We have been to Sutter’s Fort and the Golden Gate. And we have a piece of advice. If you want to feel the westward movement in your American bones, pass up those places. Stand here on the Oregon Trail beside Rebecca Winters and watch the trains go by.” 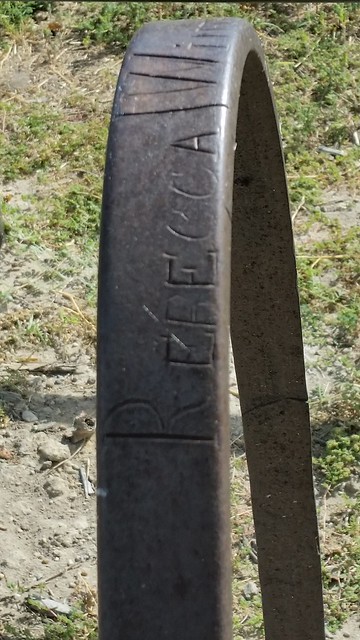 Tomorrow we’ll head back to the Monument for a hike to the summit.