A Short Visit to Eastern Nebraska – Lincoln and Omaha

Posted on September 1, 2015 by placestheygo

Greenwood, NE (between Lincoln and Omaha)

After our stay along the Mississippi River south of Davenport, we drove over 300 miles across Iowa into Nebraska. 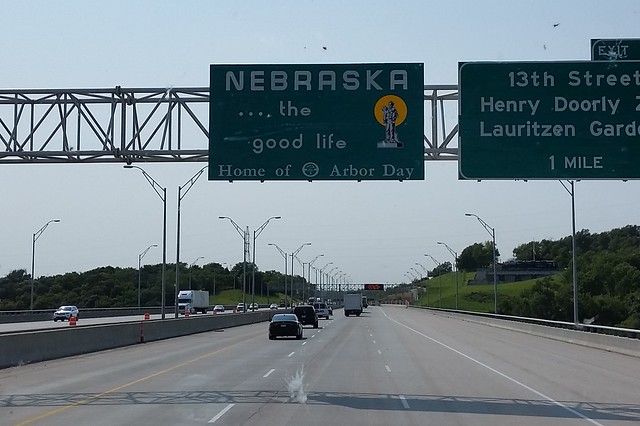 We crossed the Missouri River south of Omaha and drove about thirty miles to Pine Grove RV Park, just off the interstate between Omaha and Lincoln.  The park is right next to I-80 so there is a bit of highway noise.  And if you stay on a Friday night be aware there is a racetrack just to the north and Friday night is race night! 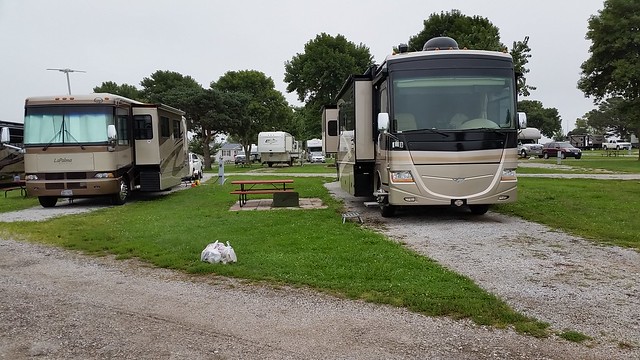 The next day we headed back to the north for a brief visit to Omaha’s riverfront area.   One of the first things that caught our attention was a large sculptor called “Monument to Labor.”  This 271 ton monument is a salute to the dedication and hard work of all those who built the city of Omaha. 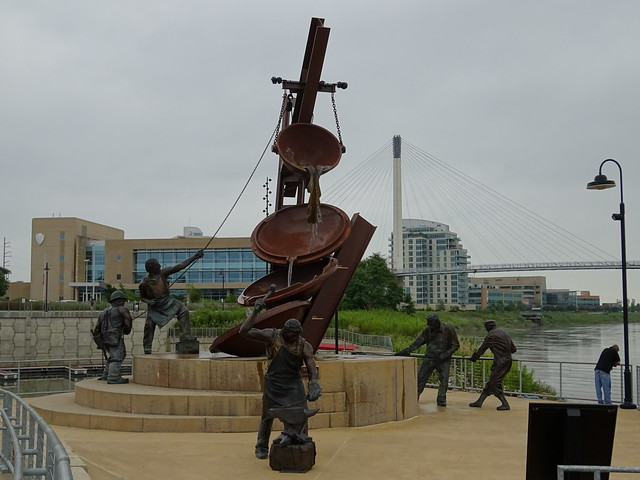 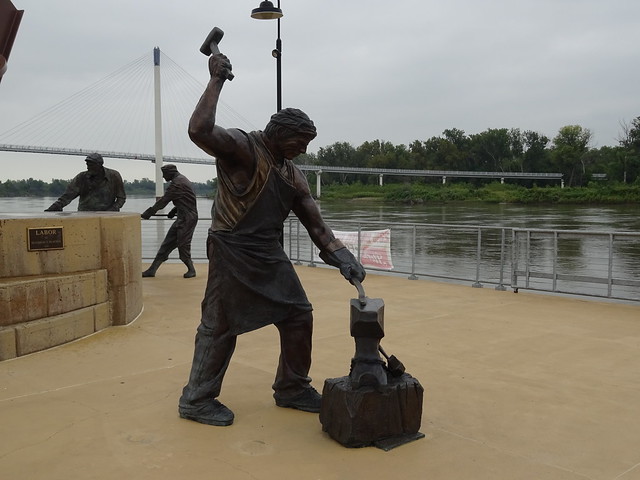 In the photo above, the bridge in the background is the Bob Kerrey Pedestrian Bridge.   It is a 3,000 foot pedestrian bridge across the Missouri River between Council Bluffs, Iowa and Omaha, Nebraska that opened in 2008.  The bridge is named for former senator Bob Kerrey (a Medal of Honor recipient for heroism in Vietnam) who secured much of the funding for the bridge.  The bridge is in an “S” shape to represent the slow flow of the Missouri River. 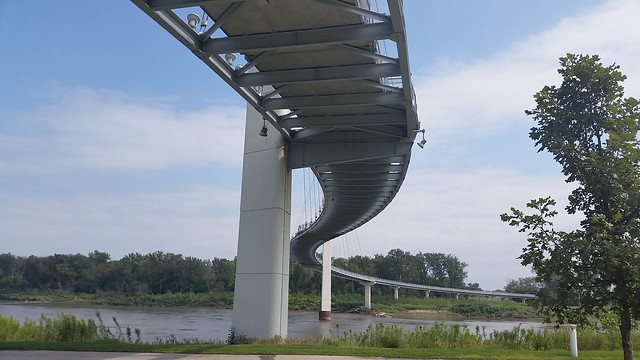 The curve of the bridge from the Omaha side 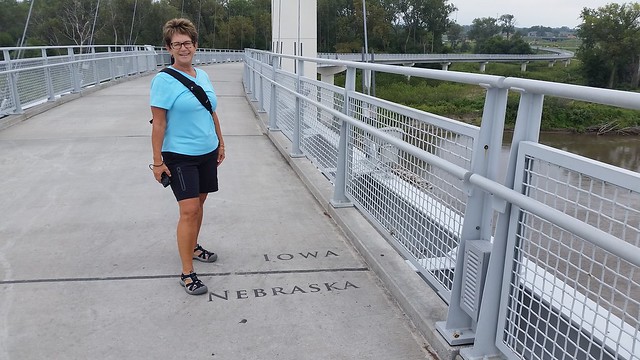 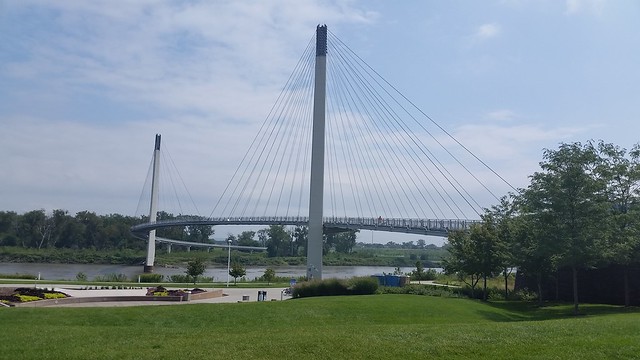 A curve in the bridge looking from the Iowa side 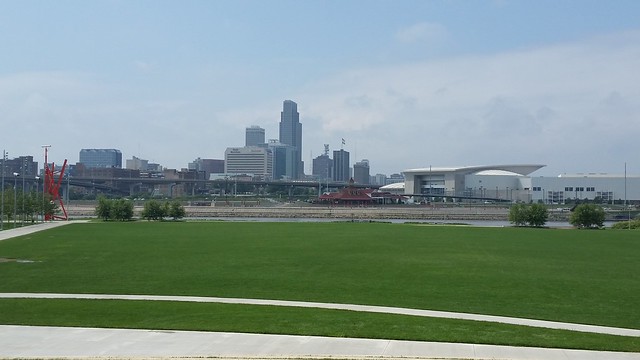 Drive north along the river toward the airport and you pass a sign that is just a bit confusing, considering that you think you are in Nebraska and that Iowa is on the other side of the Missouri River just to the east. 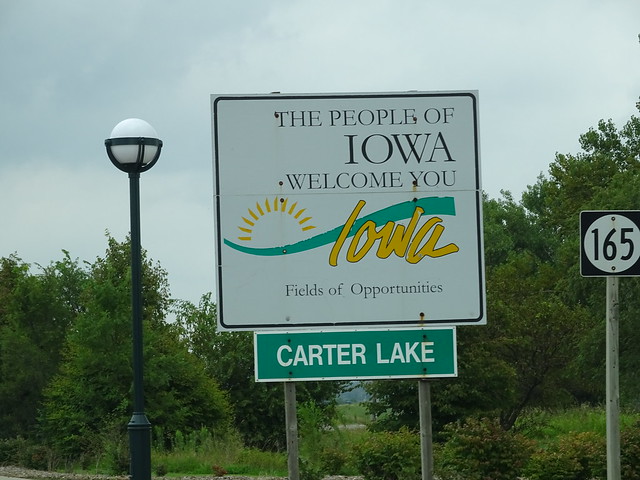 As John was studying  Google maps, he noticed that the state line made a turn from the river, went north around a small lake, and returned to the river.  At first he thought Google had made an error in their map.  But more research revealed that they were correct!  This little area, surrounded by Nebraska, is part of Iowa! 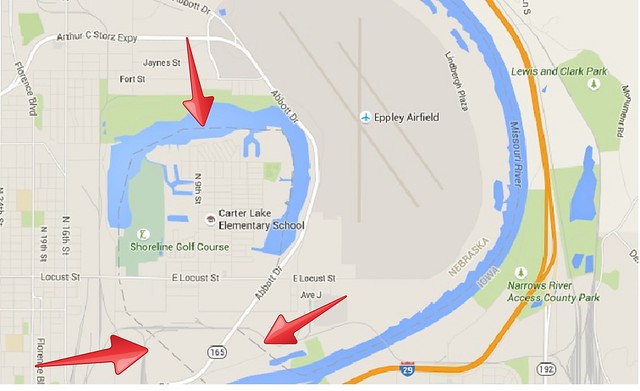 Carter Lake is the only city in Iowa located west of the Missouri River. This is due to a flood that occurred in March 1877, which redirected the course of the river 1.25 miles to the southeast.  The remnants of the old river course, called Saratoga Bend, became an oxbow lake, Carter Lake, for which the town is named today.

After extensive litigation between Iowa and Nebraska, in 1892 the Supreme Court finally ruled that Carter Lake belonged to Iowa.   Although the general rule is that state boundaries follow gradual changes in the course of a river, the Court ruled that an exception exists when a river avulses ( a sudden cutting off of land by flood, currents, or change in course of a body of water) one of its bends.

Although Carter Lake was legally considered part of Council Bluffs, residents lacked the basic city services enjoyed by residents east of the Missouri but were still subject to city taxes. The community successfully seceded from Council Bluffs in the 1920s, intending to become part of Omaha, Nebraska but that city did not want to pay to extend sewers or water lines either. In 1930, Carter Lake was incorporated as its own municipality.

So, a little two square mile section of Iowa exists in Nebraska.  Who knew! 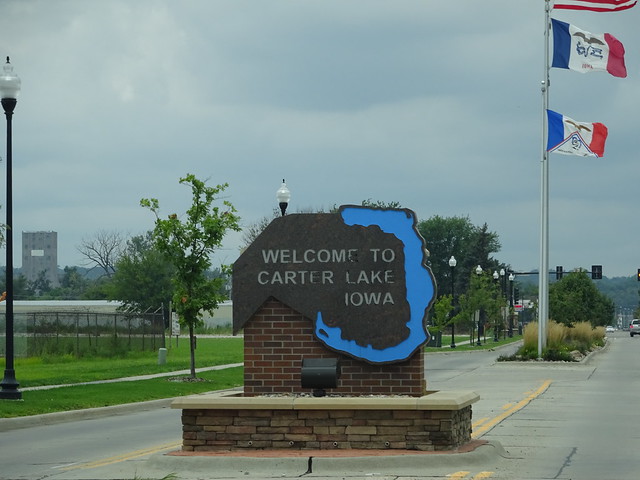 The next day we drove south to visit Lincoln, the state capitol of Nebraska and home of the main campus of the University of Nebraska. 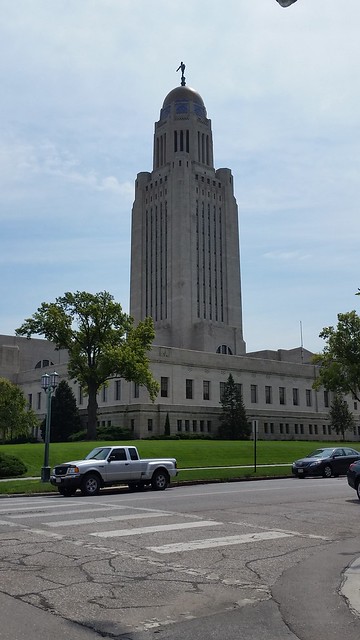 Nebraska is the only state in the United States with a unicameral legislature (one elected group – all other states have two).  Although this house is officially known simply as the “Legislature” and more commonly called the “Unicameral”, its members call themselves “senators”. 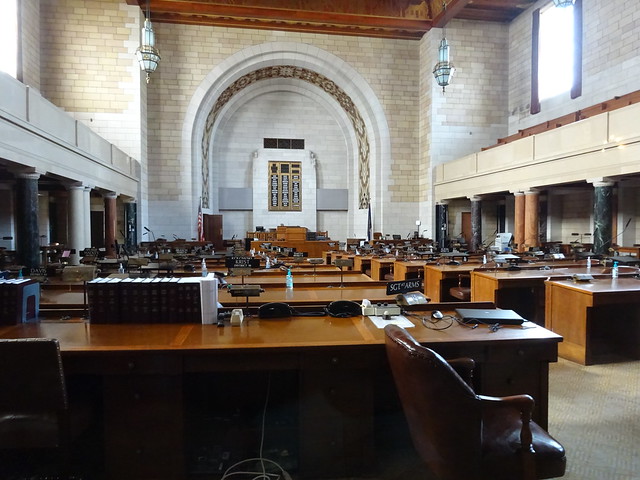 Prior to 1934 the state had a two house legislature.  Today the room formerly used by a House of Representatives is use primarily for ceremonies. 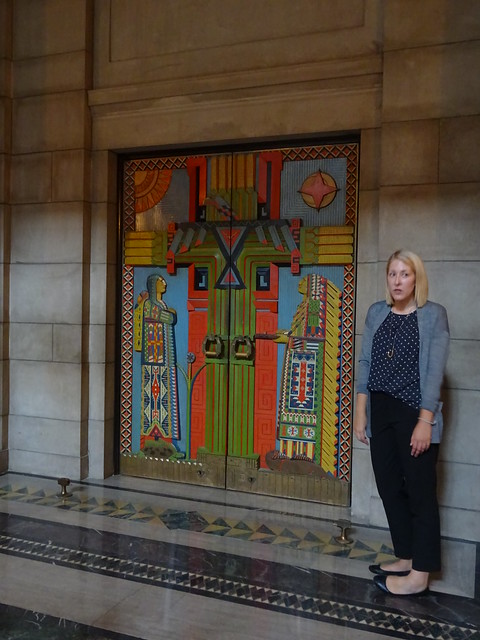 Along some of the main hallways are busts of Nebraskans elected to the Nebraska Hall of Fame.  Buffalo Bill Cody and Father Flanagan (founder of Boys Town) are two we recognized. 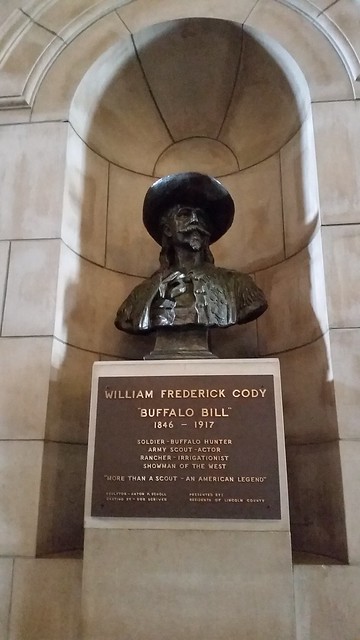 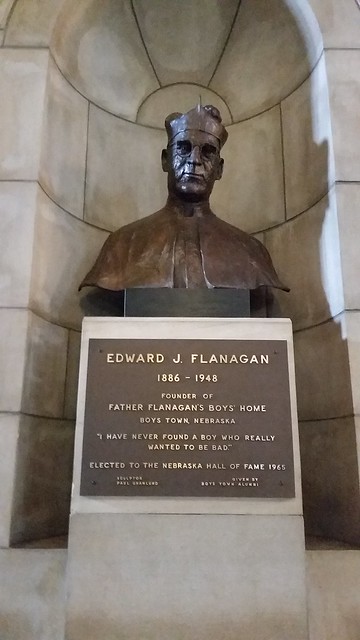 Above one of the hallways are murals depicting scenes from the state’s history. 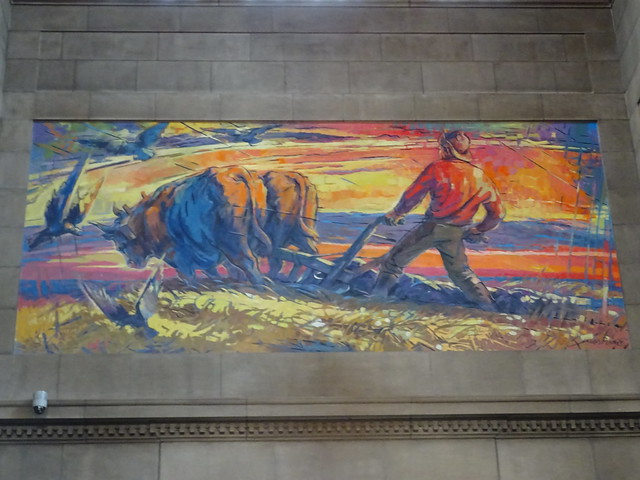 After the tour we took a very old elevator up to the observation deck on the top of the building where we had a great 360 view of Lincoln. 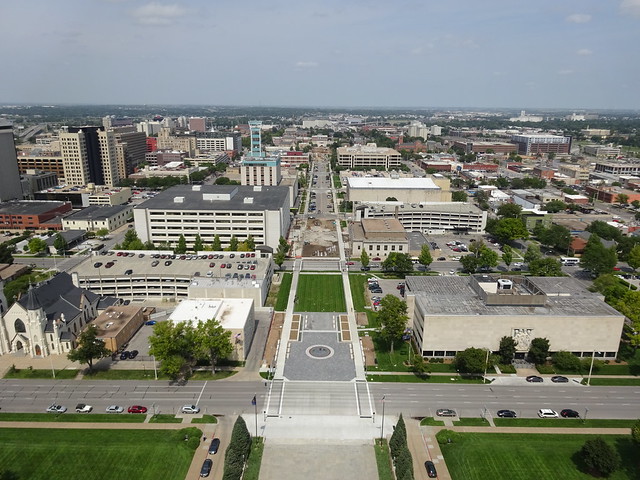 Later, we rode our bikes through the campus of the University of Nebraska.  It’s not the most impressive campus we have seen but the football stadium is impressive. 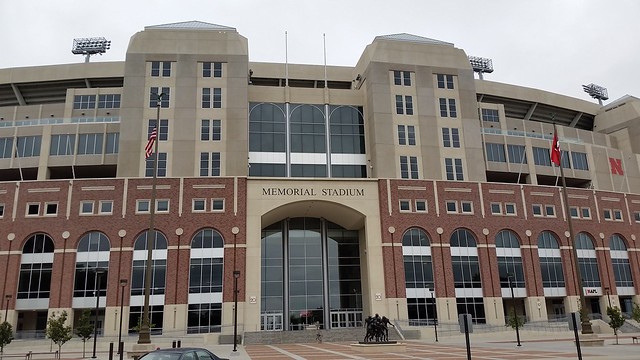 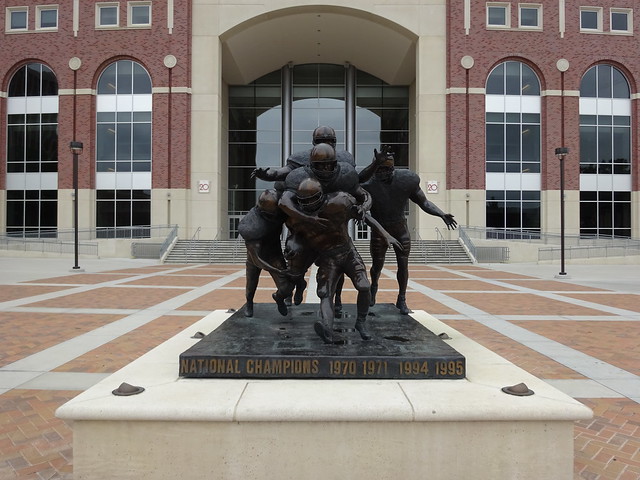 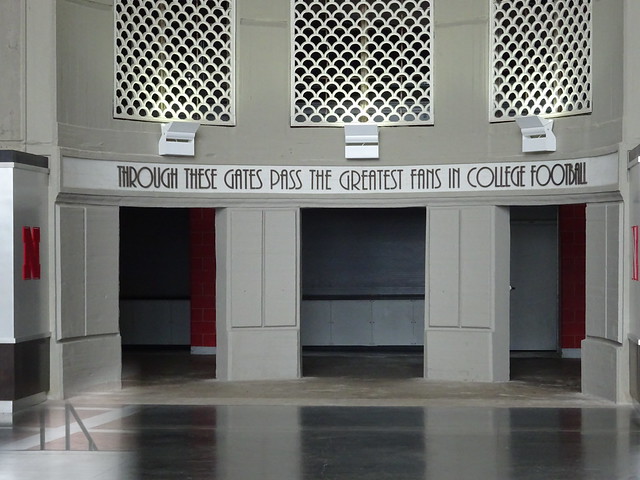 We guess they’ve never been to a Penn State game!

For lunch we headed to the Haymarket section of the city, an old warehouse area renovated into shops and restaurants, for lunch at Lazlo’s Brewery and Grill, Nebraska’s first craft brew house. 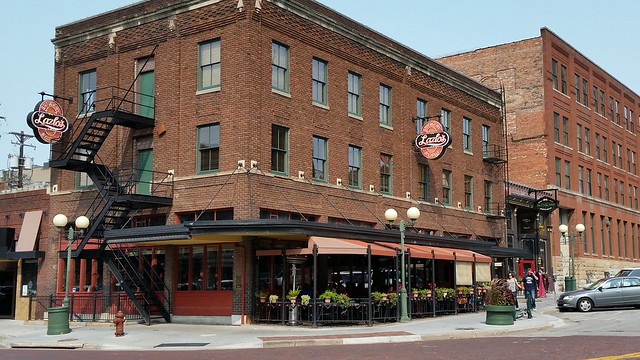 After visiting the two largest cities in the state, we will now continue our journey west across the state for a visit to Scottsbluff.  More on that later . . .