After a long drive from Indianapolis, we finally crossed the Mississippi into Iowa, our first time in the state with the motorhome. 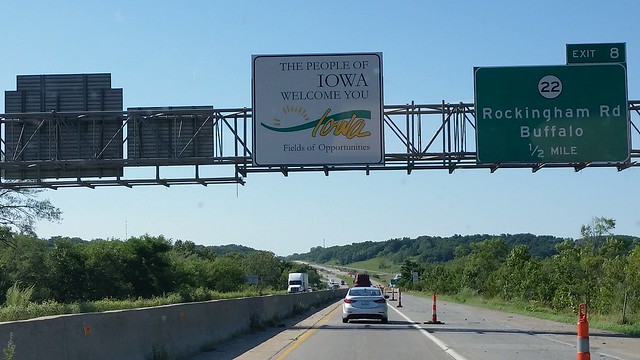 We drove south about seventeen miles along the west bank of the river to an Army Corps of Engineer Park, Shady Creek Recreation Area, where we will stay for the next few days while we visit the Quad Cities (Moline and Rock Island, IL and Davenport and Bettendorf, IA). 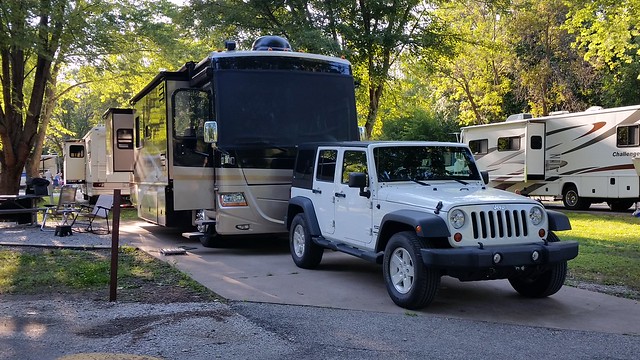 The Mississippi is lined with small COE (Corps of Engineers) Parks, and Shady Creek is one of the nicest, with electricity and paved sites.  Some, including ours, have a decent view of the river. 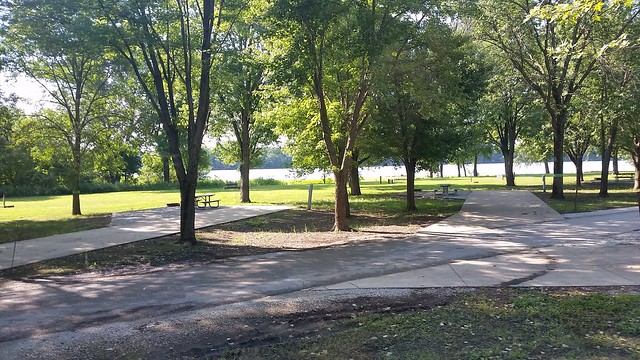 Looking our  window with the river in the background

The morning after our arrival we drove into Davenport and stopped at a visitor center.  We knew John Deere has its headquarters across the river in Moline but learned that their Harvester Plant is there also and gives tours.  The information we read said that you needed to sign up for a tour at least 48 hours in advance, but we headed across the river to see if they accommodate walk-ins with the afternoon group. 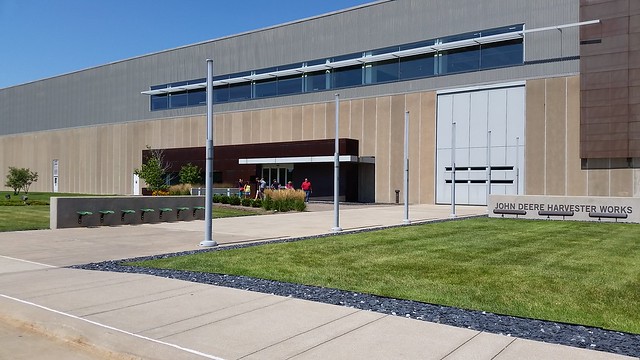 Once at the Deere Visitor Center we found out that there were two slots left on the next tour beginning in a half hour.  So we had some time to look at displays in the visitor center, including the latest harvester. 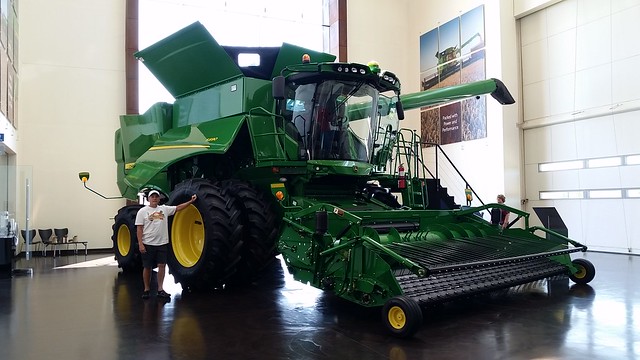 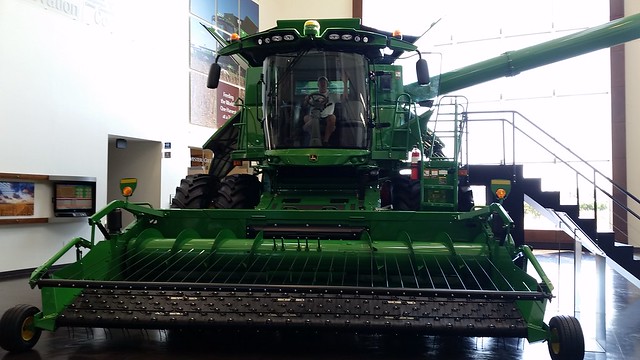 Seems there is a farmer ready to move this model out of the showroom! 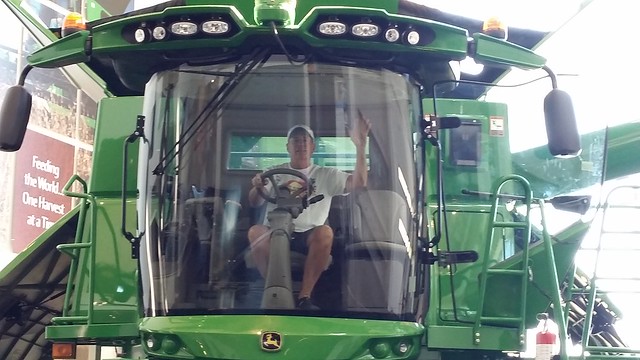 He looks a bit familiar 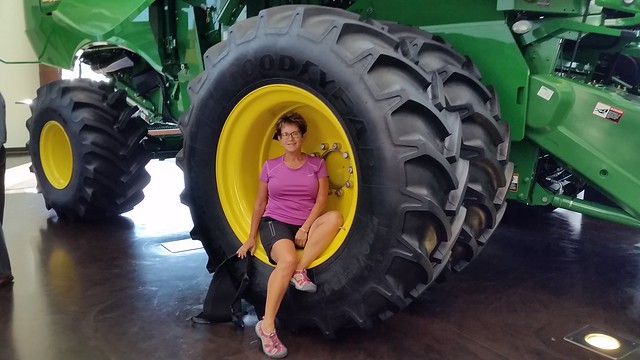 Using beauty to sell this beauty!

John Deere Harvester Works is the largest, most modern combine manufacturing facility in the world.  It is approximately 90 acres under roof (that’s nearly 4 million square feet),  much t9o large to tour on foot.  So the tour is conducted on a small tram pulled by a John Deere lawn tractor.  A retired worker sits in the first car facing visitors while another retiree drives the tractor.  Everyone is given headsets and the tour guide talks over a radio, a great feature as some areas of the plant produce quite a bit of noise.  Photography is not allowed in the plant but we did find a photo of one of the trams on the Internet.

John Deere products have a great reputation for quality and this tour shows how that reputation is earned.  Quality is on display at every station.  A harvesting machine is an extremely complicated machine and it was fascinating to watch all the steps in its construction.  Don’t miss this tour if you pass through the Quad Cities.

The next day we parked the Jeep at the visitor center in Davenport and rode our bikes across the nearby Government Bridge to visit the Rock Island Arsenal. 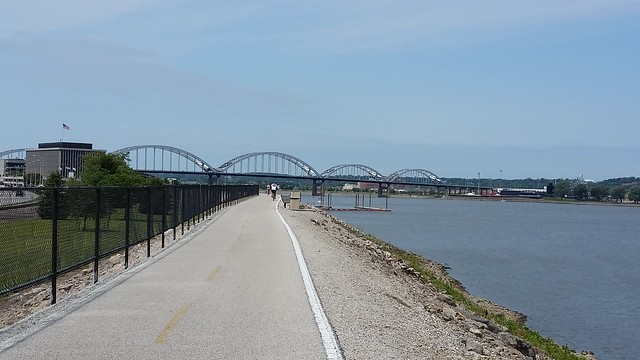 The path in Davenport with Centennial Bridge in the distance

The Upper Mississippi has a series of dams and locks created to insure water depths sufficient for shipping and to eliminate rapids.  One of the locks and dams, Center Lock and Dam 15, is located on the southwest side of Rock Island.  We stopped at the small visitor center there and watched a nice video on the history of shipping on the river.  As we exited the video the ranger alerted us to something coming down the river into the lock.  Check out the small speck in the photo below (we only had the phone with us so no good zoom). 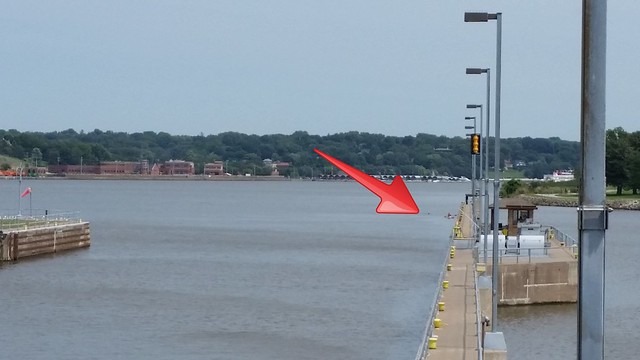 The tiny speck at the end of the arrow is a swimmer, while the speck that is a bit larger is a paddler in a kayak.  Former Navy officer Chris Ring is swimming the entire length of the Mississippi River to raise awareness of fallen service members.  His mission is called “Swim For Their Sacrifice.” He is swimming the entire 2,552 mile length of the river by the end of November.  At this point he has completed over 700 miles and is averaging fourteen miles a day.

Chris was not permitted to swim in the lock so he climbed out of the water and walked its length before re-entering the river.  But his companion in the kayak did stay in the water and went through the lock. 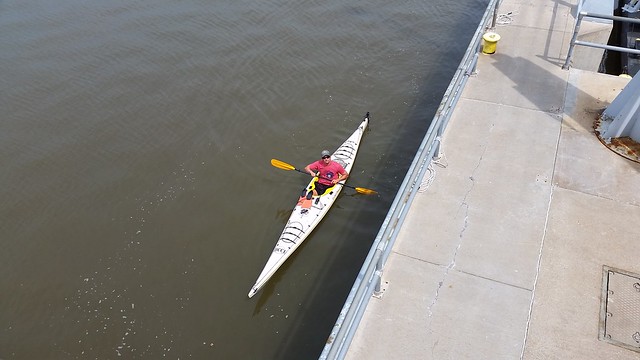 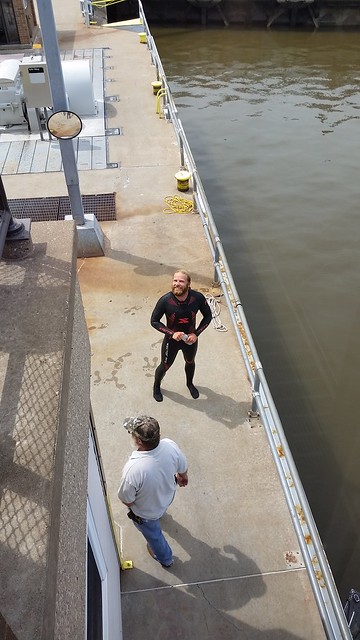 After watching Chris Ring swim off into the distance we took a ride around Rock Island.

The Rock Island Arsenal comprises 946 acres on Arsenal Island, originally known as Rock Island, on the river between the cities of Davenport, Iowa, and Rock Island, Illinois. It lies within the state of Illinois. The island was originally established as a government site in 1816, with the building of a small fort.  It has manufactured military equipment and ordnance since the 1880s and is now the largest government-owned weapons manufacturing arsenal in the country.   It is designated as a National Historic Landmark.  Things were pretty quiet on the island as it was Saturday, so we just enjoyed a bike ride through the facility before returning to Davenport.

We’ll stay here for a few more days before moving on to Nebraska.  More on that later . . .

17 Responses to The Quad Cities