Serpents and No Thoroughfare Canyon Trails

The weather forecast for Saturday called for partly sunny skies with a chance of afternoon thunder showers.  So we were out (relatively) early to hike a couple of trails just inside the east entrance in Colorado National Monument. 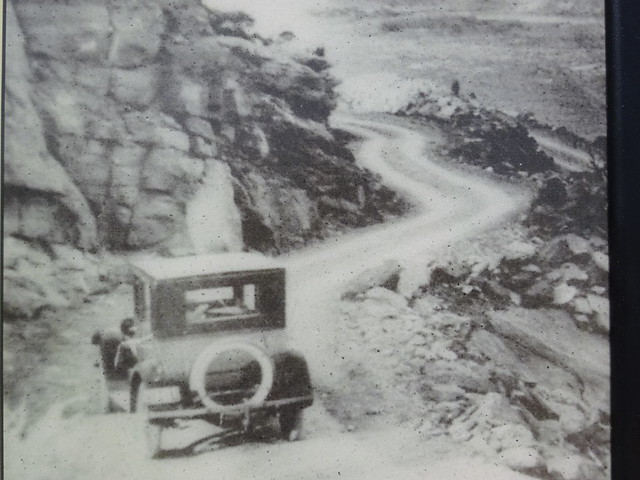 The old roadbed provides a nice wide trail as it winds uphill for 1.75 miles.  While it is uphill all the way, the elevation gain is gradual as the road winds around the 20 switchbacks. 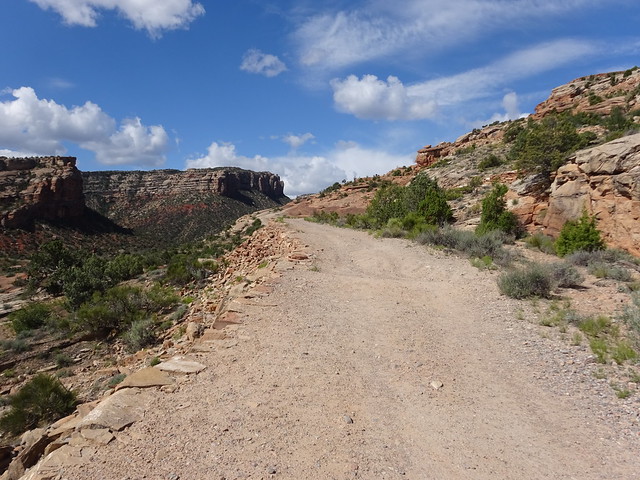 As we began the hike we could see a man-made formation high on the hill that looked like a turret on a castle. 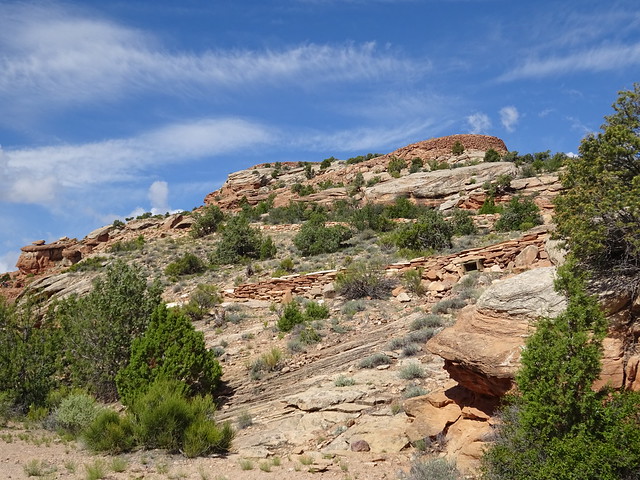 As we climbed we realized that it was the rock support for one of the switchbacks.  When we made our way around that switchback, we could see the start of the trail/road below us. 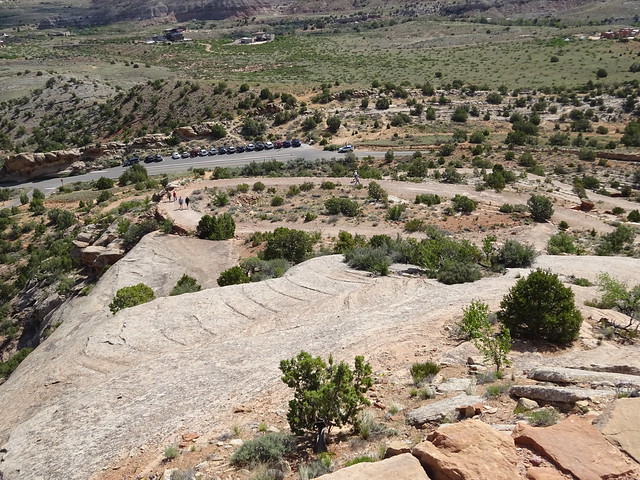 In many spots you can see the markings left by the hand drills used to dig into the rock to set the blast charges. 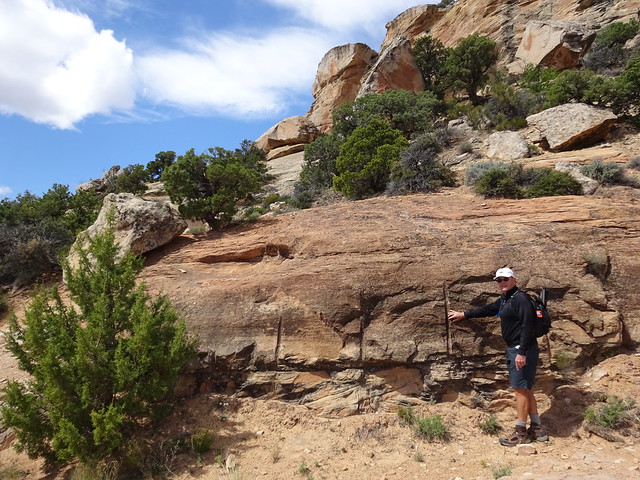 A second trailhead marks the upper end of the trail where the old road meets the new road. 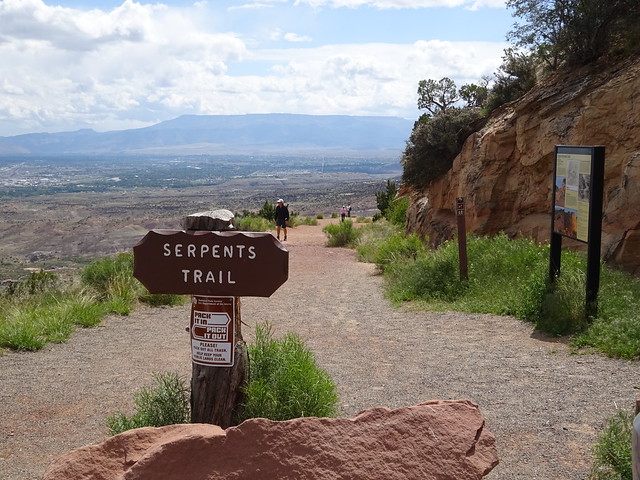 The Rim Road through the monument is a very popular ride for bicycles.  In the photo below one biker going up hill crosses paths with another going down.  Guess which one was going faster! 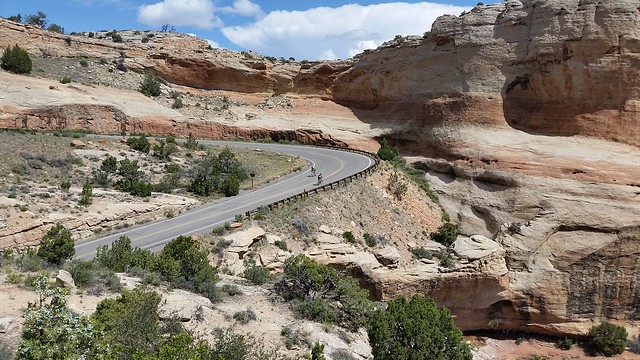 In the photo above the trailhead is just to the left of the upper part of the road.  From that point you can look down and see were the road goes into a tunnel.  The tunnel goes through a huge rock wall that forced the old, original road to go steeply up the grade to get around it. 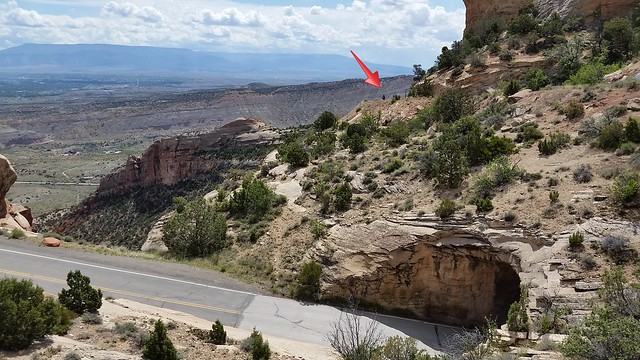 Pam is standing on the trail just below the arrow. 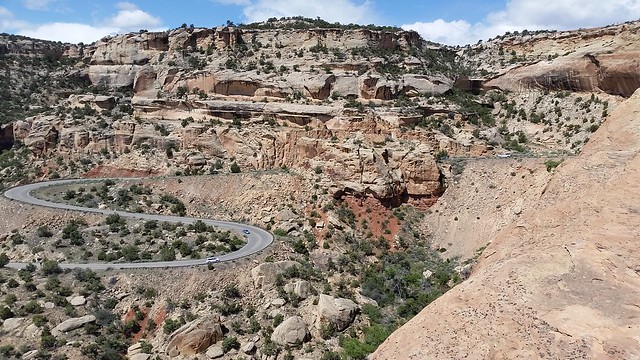 The winding Rim Road after it goes through the tunnel

Returning back down Serpents Trail we crossed the road and set out on the No Thoroughfare Canyon Trail for a visit to a high waterfall about two miles up the canyon. 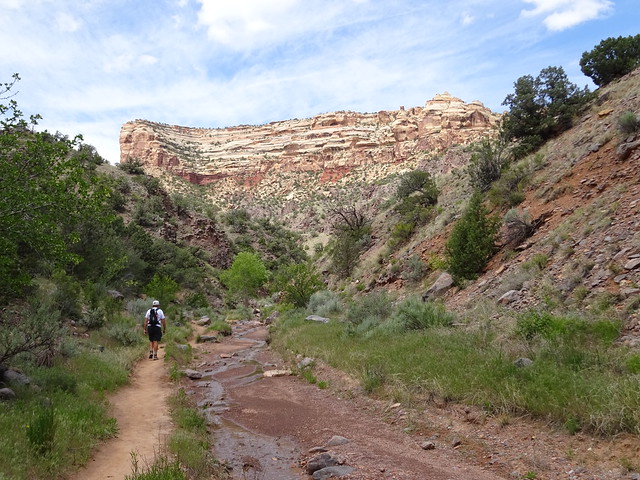 Once again we had one of those pesky water crossings.  But again we used our experience to safely navigate our way across. 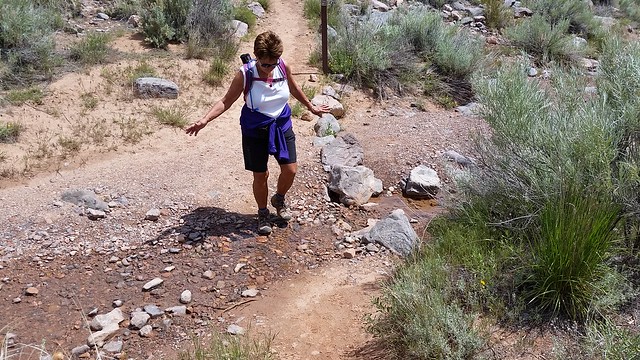 Less than a mile up the trail we came to a pool below a small waterfall. 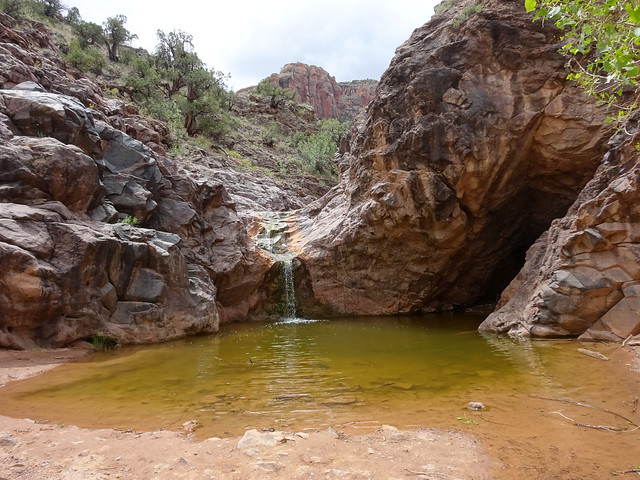 The trail went around the small pool using a set of steps constructed by the Parks Service. 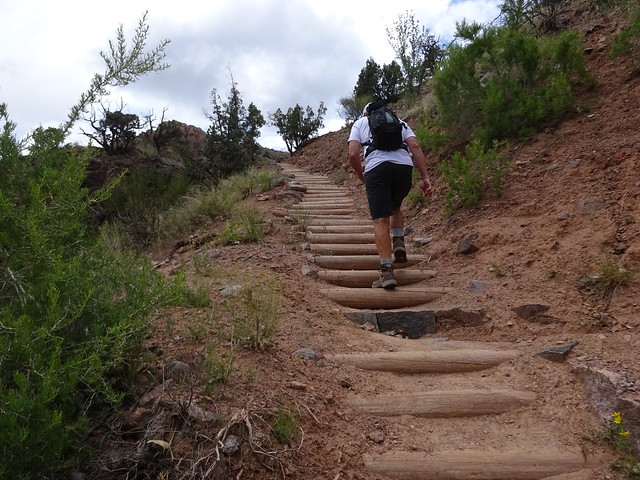 The trail then followed the stream up into the canyon.  Most of the trail was over bare terrain, but at one point we had to make our way through tall vegetation near the creek. 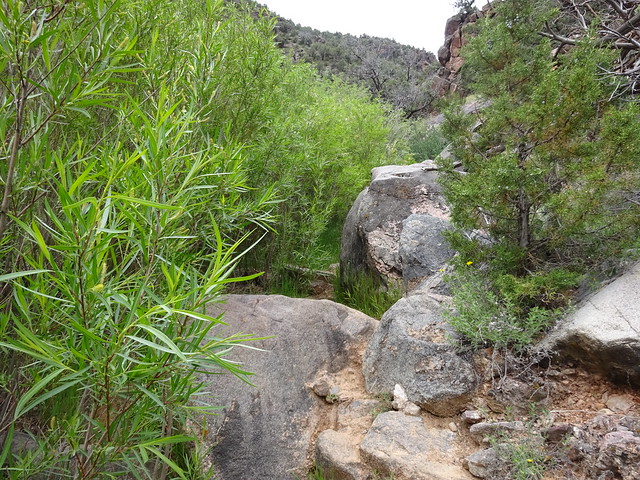 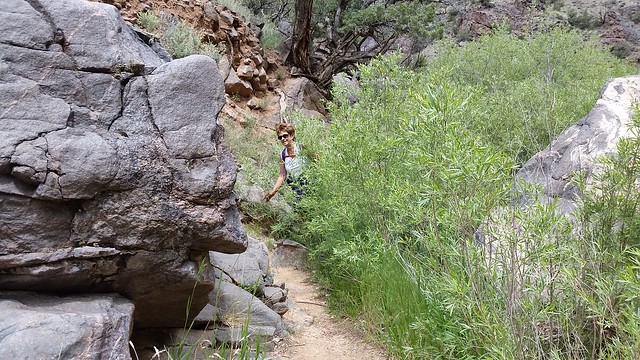 Soon we came to our goal, a tall waterfall.  Although the flow of water is a bit sparse, the long drop it made down into a small pool provided a beautiful, tranquil spot to enjoy a few quiet moments. 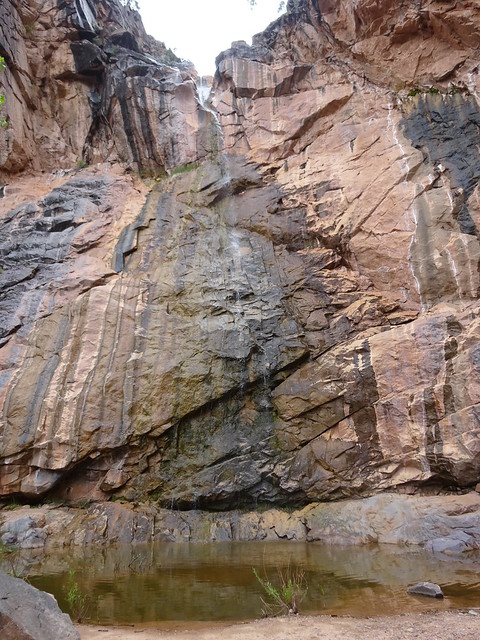 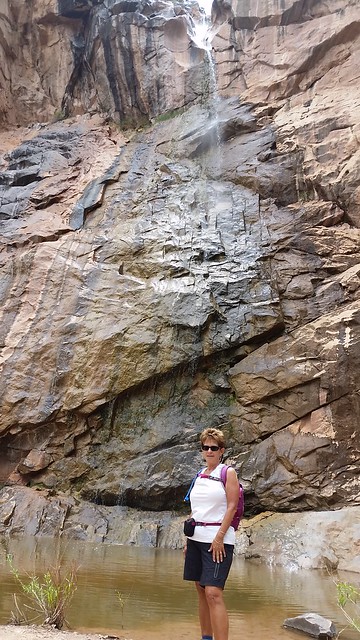 After enjoying a light lunch near the falls, it was back down through the vegetation . . . 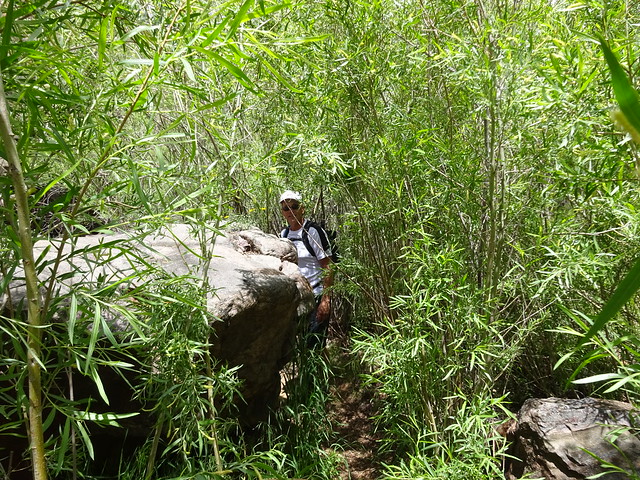 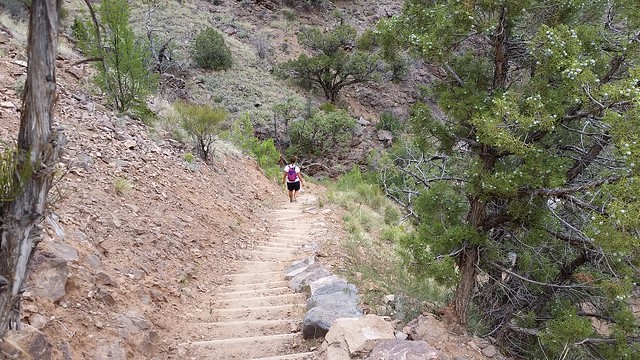 . . . back through the canyon to the trailhead. 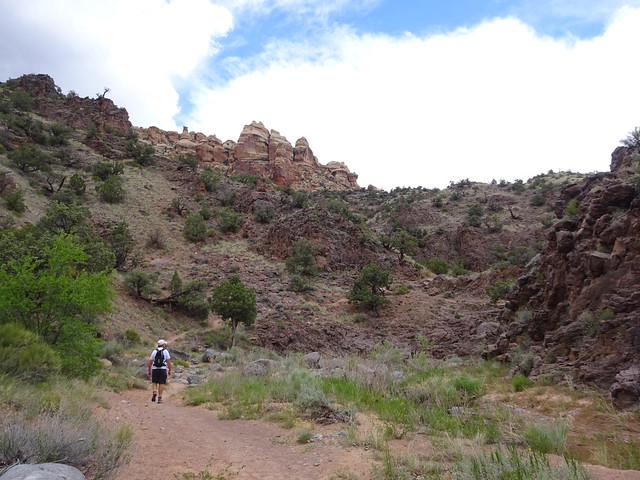 Just as we returned to the Jeep the rain began to fall.   That was all right with us as it was time to head to a local coffee shop chain for a well deserved little treat after completing 8.1 miles!

23 Responses to Serpents and No Thoroughfare Canyon Trails