The “reef” in the name of Capitol Reef NP refers to a 100 mile long warp in the earth’s crust called the Waterpocket Fold.  The fold forms a north-to-south barrier that even today has barely been breached by roads.  Early settlers referred to parallel, impassable ridges as “reefs,” from which the park gets the second half of its name.

During our previous visit to Capitol Reef NP (May 2013) our friends and local residents, Larry and Annette, took us for a long Jeep ride that included a stop at Strike Overlook, a viewpoint on top of the fold with great views to the east.  At the same parking lot for the Strike Overlook is a trailhead for a ten mile hike called the Upper Muley Twist Trail.  We didn’t get a chance to hike this trail then and were determined not to miss it during this visit.  So when we finally had a day with no chance of rain, we were up early (for us) and on our way.  We needed to head out early as it is a drive of over 50 miles, much of it on dirt roads, just to get to the trailhead.

To get to the Strike Overlook Trailhead we first drove east on Rte. 24 through the national park.  Just past the park boundary we turned south on the Notom/Bullfrog Basin Road.  The first ten miles of this road are paved, then it turns to a fairly smooth dirt track. 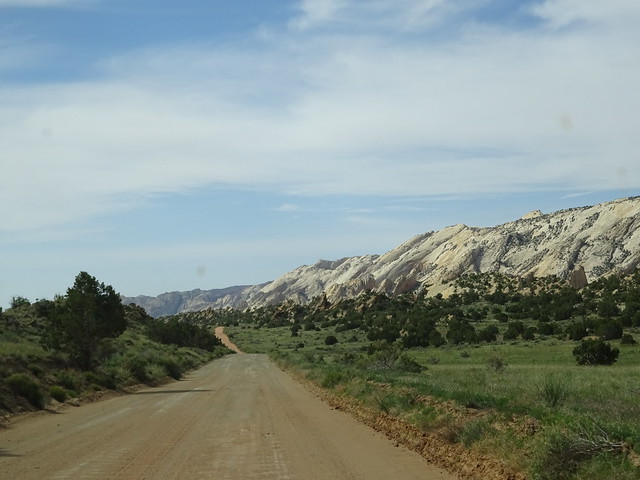 After a bit less than 34 miles we turned west on to the Burr Trail Road, a dirt road that quickly winds up and over the Waterpocket Fold in a series of sharp switchbacks. 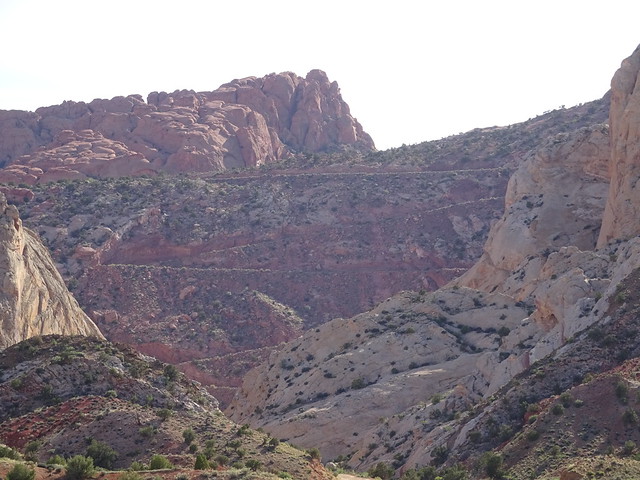 The Burr Trail Road going up and over the Waterpocket Fold 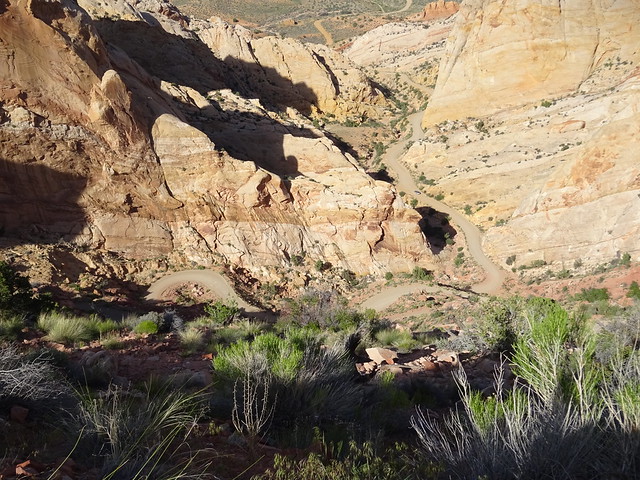 Looking back down the Burr Trail. The tiny dot on the road above the shadow is a car!

About a mile west of the top of the fold is a road to the north that leads to the trailhead.  This road is a bit rough and four-wheel drive is recommended.  If arriving in a low clearance vehicle you would need to park here and hike three miles to the trailhead. 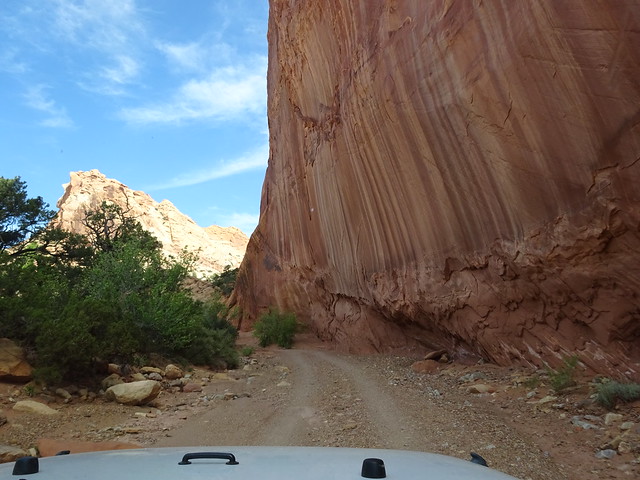 The road to the trailhead

The small parking area at the trailhead only has room for a few vehicles.  The small lot was not a problem for us as we were the only ones there.  The sign says the trail is nine miles, but someone scratched “10” below the nine.  We agree with the ten! 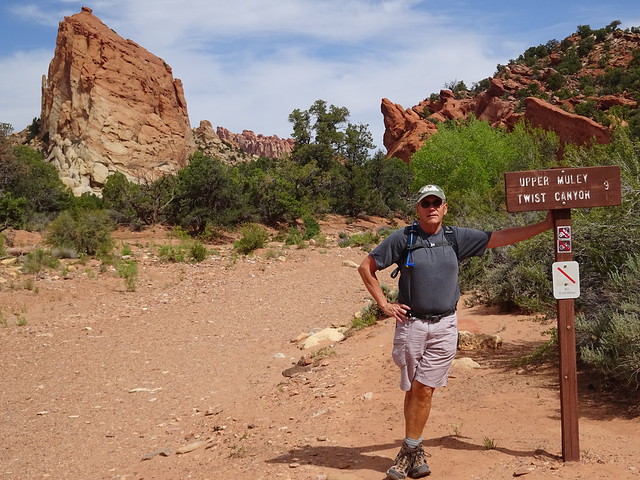 Most of the first half of this hike is fairly easy as it goes up a wash.  The recent rains have made the wash wet is spots, but not enough to cause a problem. 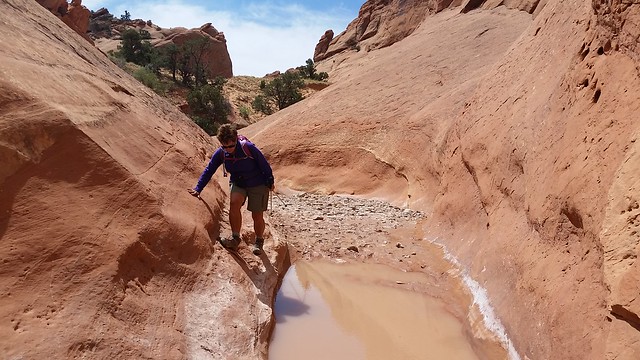 There are numerous arches on the west side of the wash.  Below are a few that we spotted. 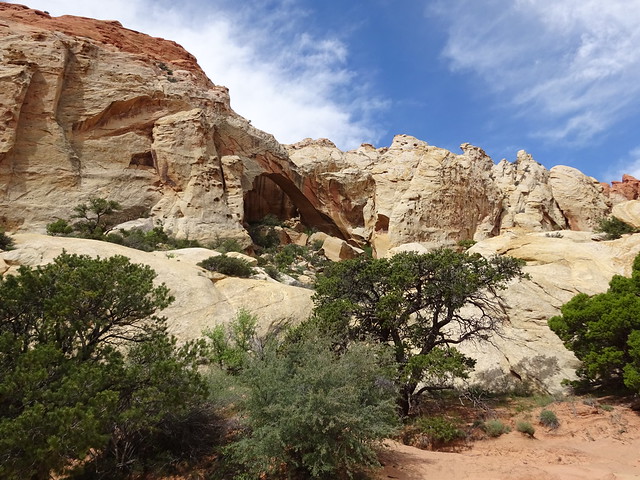 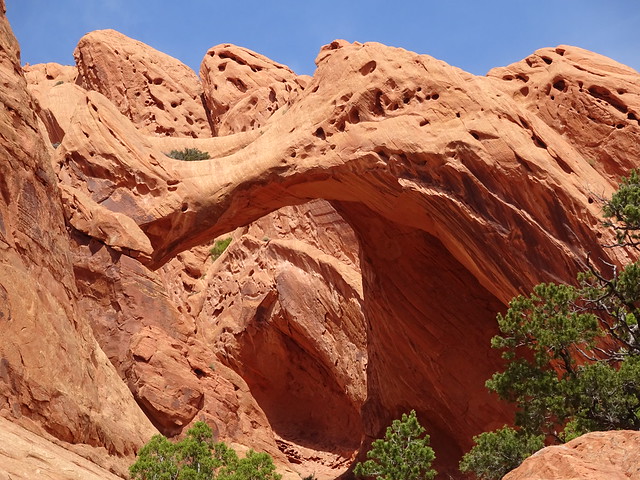 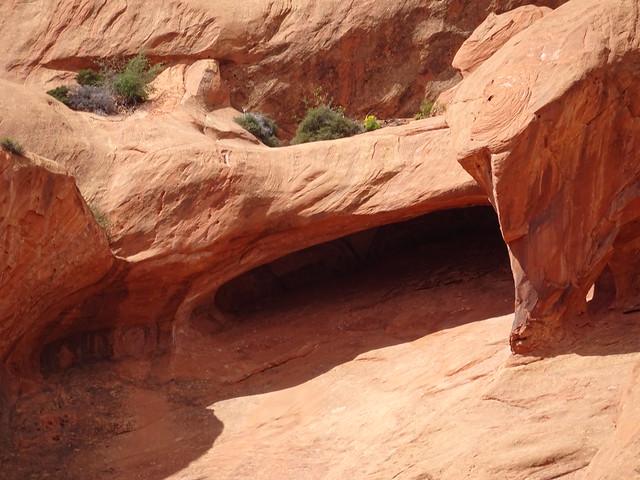 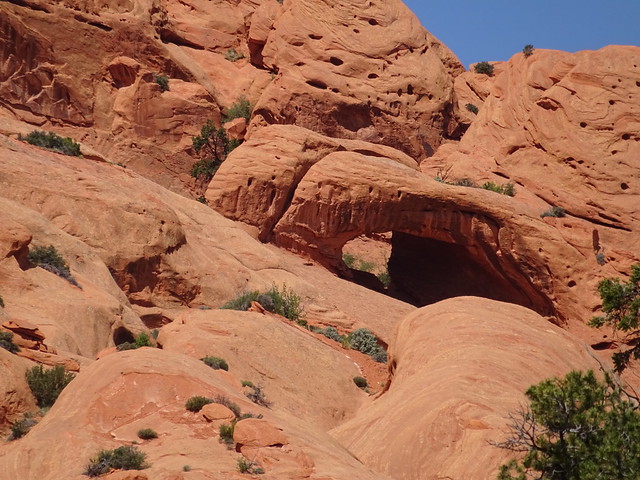 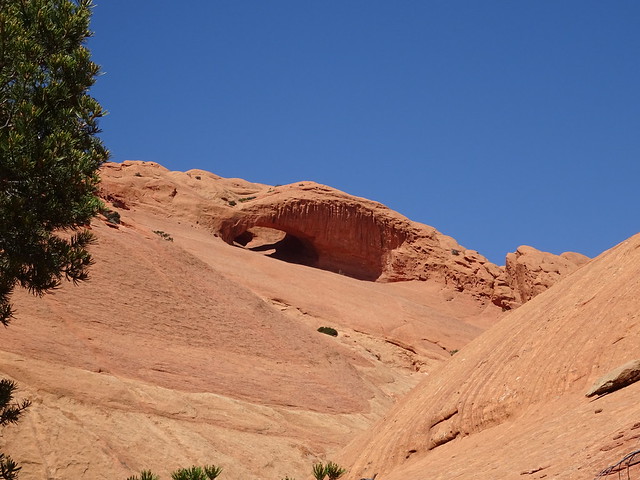 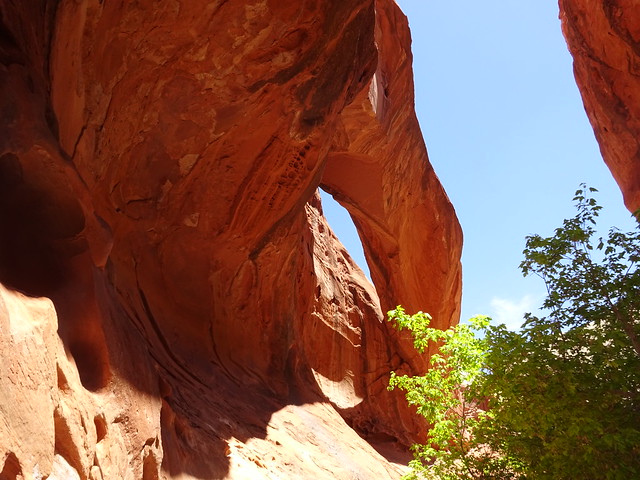 About a mile and a half up the trail the wash enters a section called the narrows.  You can go in for a few hundred feet but it eventually ends below a high pour-over, forcing you to turn and go back out. 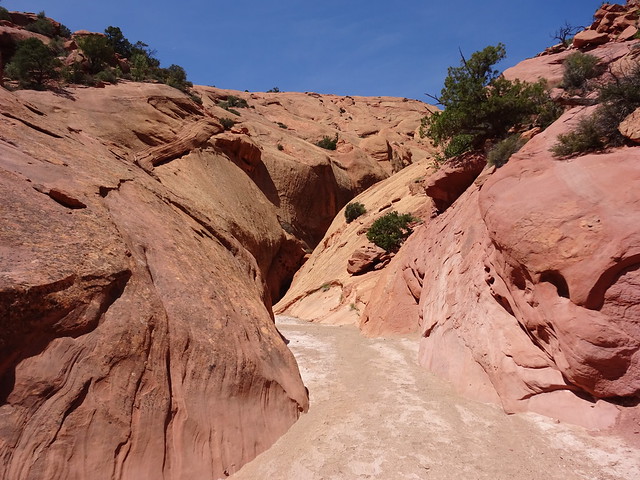 Entrance to the dead end narrows

Just before entering the narrows there is a cairn on the east side of the trail sending you up and around it.  This is a pretty difficult hike of about seven tenths of a mile before you return back into the wash. 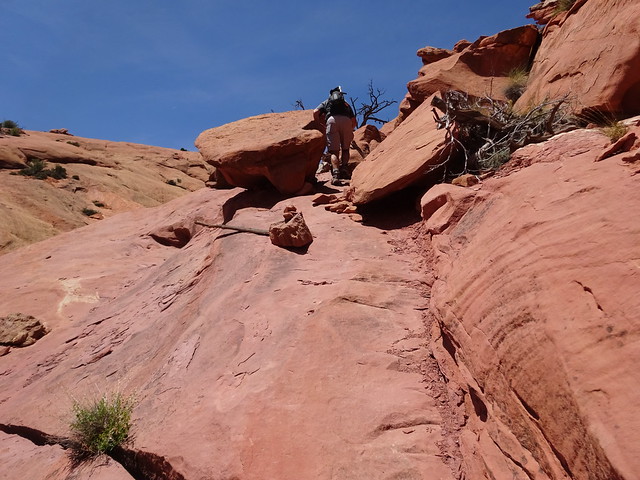 Start of the go-around to avoid the narrows 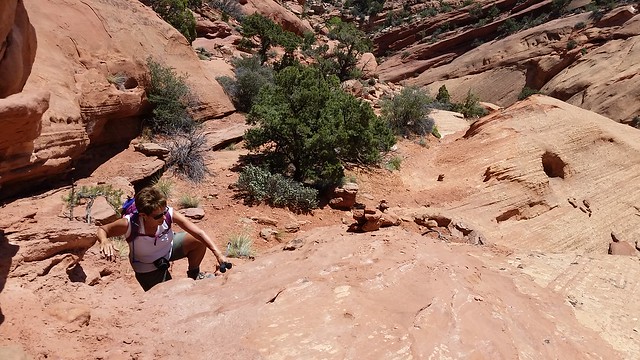 Sections of the go-around require some scrambling 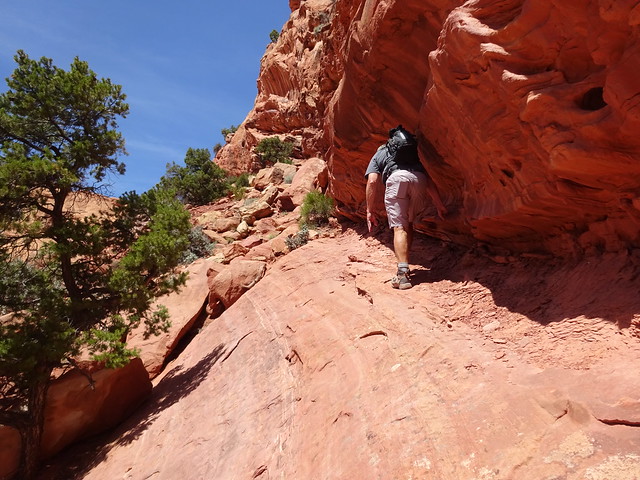 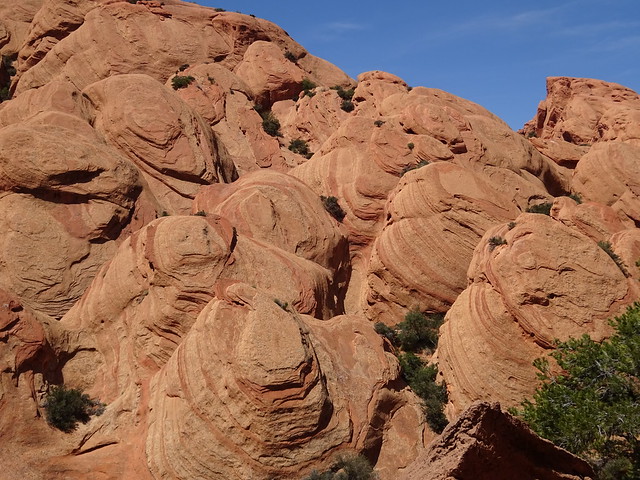 At one point the view to the west looks like giant cow paddies!

After an exciting scramble up and around the narrows, we came back into the wash.  A short distance from there we came to the sign directing us to the east for a climb up to the Rim Trail, which will lead us back toward the trailhead. 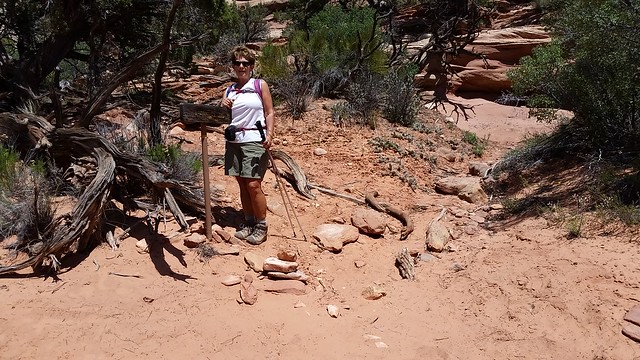 The turn headed up to the Rim Trail

At this point we were at the halfway point in the hike.  We’ll share the return trip with you in our next blog.  So stay tuned . . .