After a number of days with cold temperatures and the threat of rain,  a few days of rain/snow mix, the sky’s around central Utah finally cleared on Monday.  We decided to take advantage of the improved conditions and hike one of the longer trails in Capitol Reef NP.  We had seen Cassidy Arch from below while driving into Grand Wash but wanted to hike up and see it from the top.  There are two ways to get to the top of the arch, one requiring a long hike of over four miles and the other a hike of about a mile.  We decided to hike the long trail.  This route includes a hike of less than a mile up Cohab Canyon, then three miles on Frying Pan Trail, then another half mile on the Cassidy Arch Trail.

The Cohab Canyon Trail is about two miles long and goes from the campground in the national park to Rte. 24 near the parking area for the Hickman Bridge.  The Frying Pan Trail cuts off of the Cohab Canyon Trail less than a mile from the Rte. 24 entrance.  We had previously hiked Cohab Canyon from the west entrance by the campground so this time we parked at the Hickman Bridge parking area and hiked into Cohab Canyon from the east.  (Note: Cohab Canyon received its name when the federal government attempted to enforcement anti-polygamy statutes in the 1880s.  Mormon polygamists, or “cohabs”, would seek refuge in the hanging canyon when hiding from U.S. Marshals.) 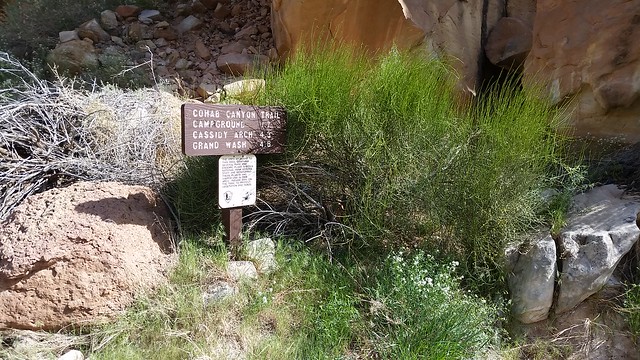 The east trailhead for Cohab Canyon

After parking in the Hickman Bridge lot, we walked a short distance to the east on Rte. 24 and found the trailhead.  The trail quickly rises up as it passes by a viewpoint over the parking area. 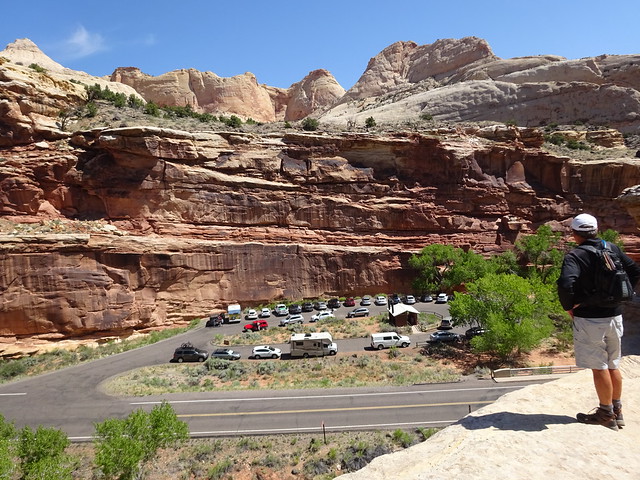 Looking down on Rte. 24 and the Hickam Bridge parking area

After about seven tenths of a mile the trail splits.  Go right and you continue up Cohab Canyon.  We went to the left on to Frying Pan Trail. 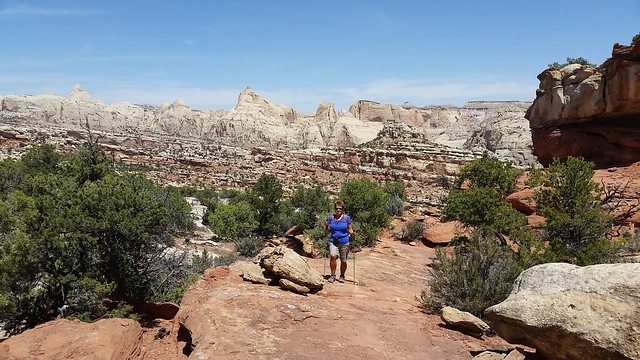 This trail winds its way up for a bit before dropping down and crossing a wash.  From there it’s a long climb up the other side.  The trail is rough but well marked.  While the elevation gain is strenuous, interesting rocks and great views keep you entertained. 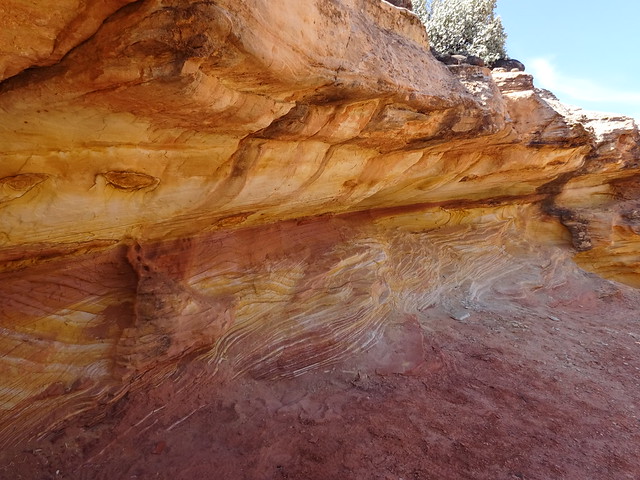 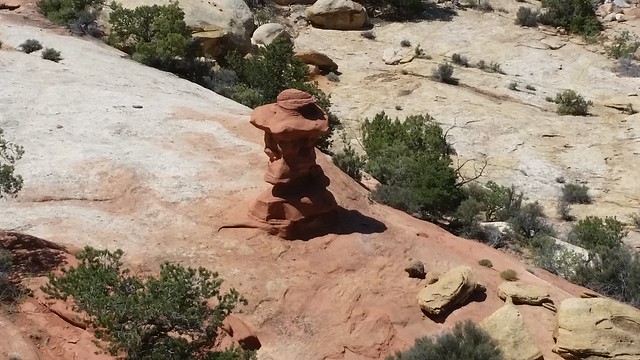 After the long, upward climb we rounded a bend and the trail began to descend as we headed to the arch.  While we enjoyed having gravity work in our favor, we knew that we would pay for this elevation loss on the return hike. 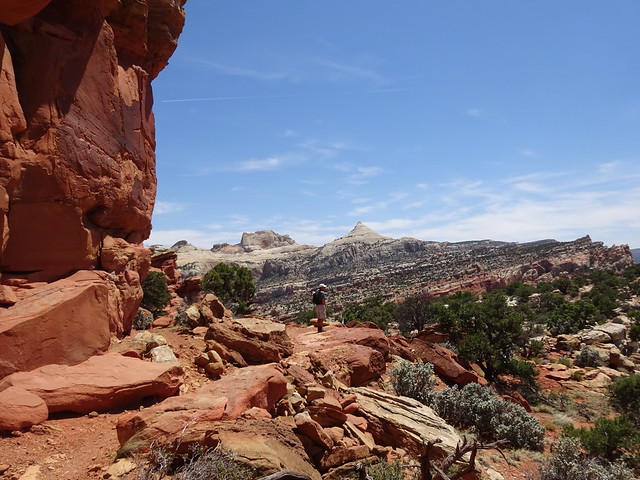 Rounding the bend before heading down

After hiking down about a half mile we came to the junction with the Cassidy Arch Trail.  If you keep going straight, it’s about a mile down to the end of the Grand Wash Road.  We turned to our right and continued for about a half mile to the top of the arch. 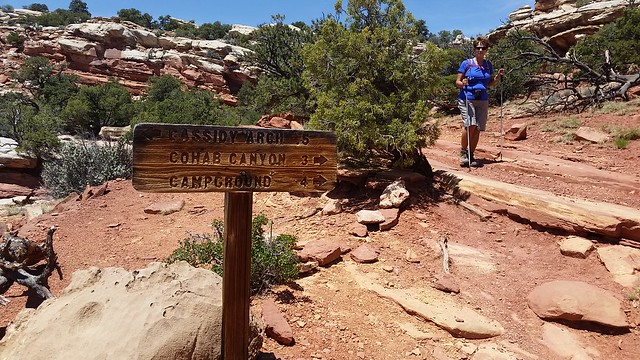 The trail leads out over a wide area of red slickrock.  You can’t see the arch until you are right on top of it as it is really just a large hole in the slickrock.  The arch itself is very wide so it is quite easy to hike across it (not recommended by the Park Service).  In fact, you don’t even know you’re on the arch as you cross it, it’s that wide. 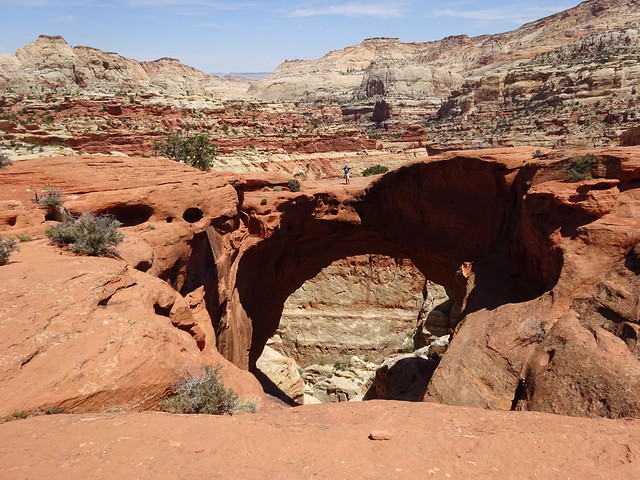 Can you spot John crossing the arch?

Cassidy Arch is named after the infamous western outlaw Butch Cassidy.  Cassidy was the most prolific bank and train robber of his time.  From 1896-1901 he and his gang, the Wild Bunch, robbed over a dozen banks and trains throughout the West, relying on secret hideouts, knowledge of the land and fast horses for escape.  It is known that the Wild Bunch used Grand Wash to traverse the Waterpocket Fold, a 100 mile long high rock “reef” that gives the national park part of its name. 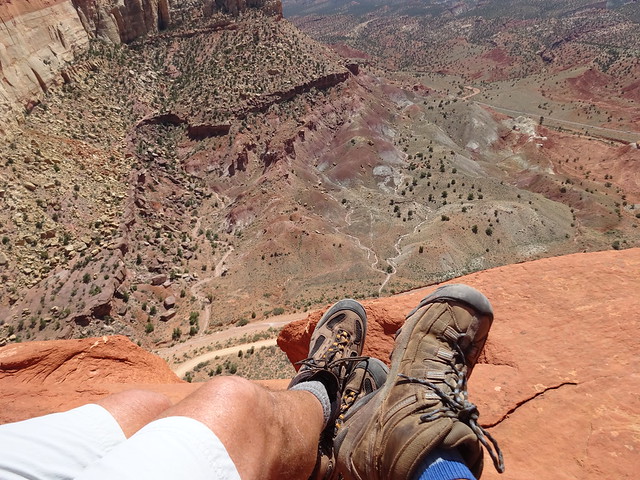 Lunch with a view over Grand Wash

After first climbing back up the trail for about a half mile, the return hike is more down than up in elevation.  We also think it has more interesting views than the hike to the arch. 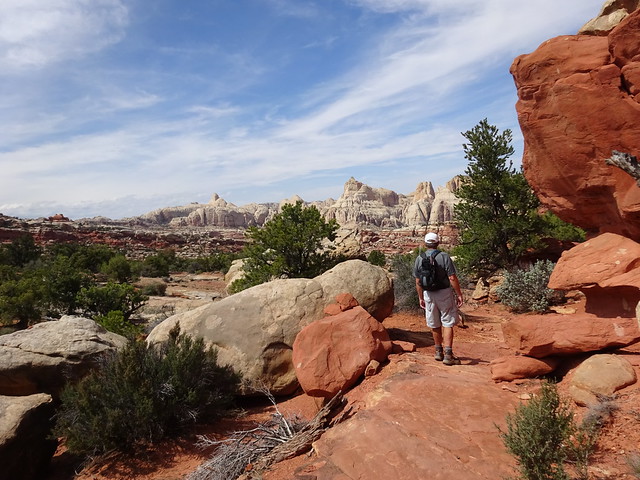 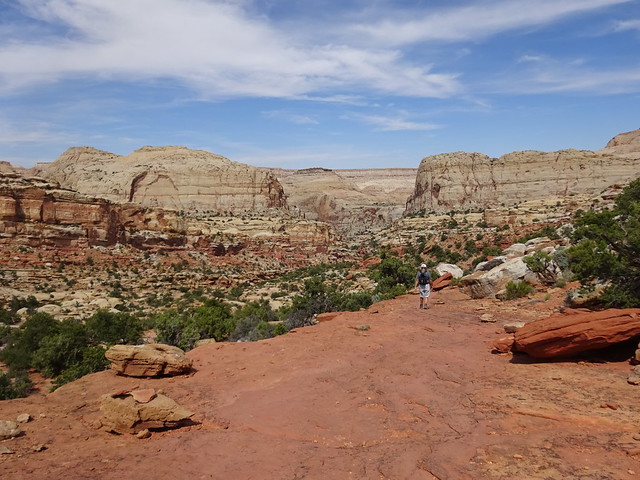 We returned to the Jeep after hiking about eight and half miles, tired but pleased to have enjoyed a great hike on a beautiful day.  It was a nice change after a number of days with poor weather.