On to Torrey, UT

As much as we like Moab (and our huge site at Portal RV), we pulled out on Wednesday and headed west toward Torrey for a visit to Capitol Reef NP.   The first half of the 150 mile drive is unremarkable as we drove north on UT-191 then west on I-70.   After a brief stop in Green River for fuel we continued west to the junction of UT-24.  UT-24 was almost  void of other vehicles as we drove through the flat land with a nice view of the snow-covered Henry Mountains in the distance. 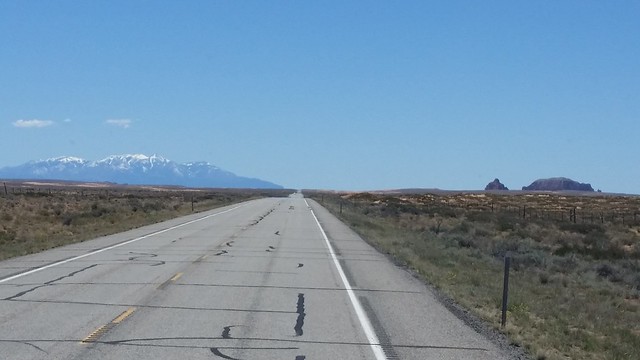 The Henry Mountains in the distance

As we approached the little community of Hanksville the scenery began to get a bit more interesting. 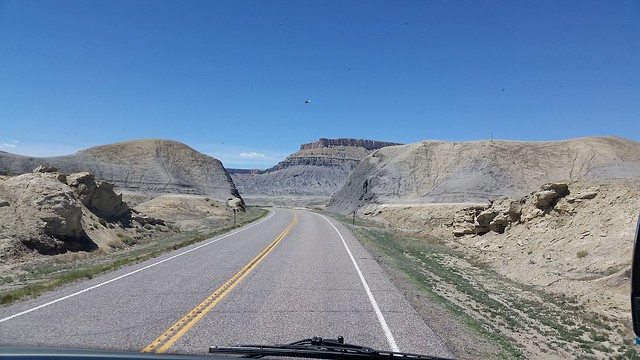 Rte. 24 then winds through the north end of Capitol Reef NP with some spectacular views. 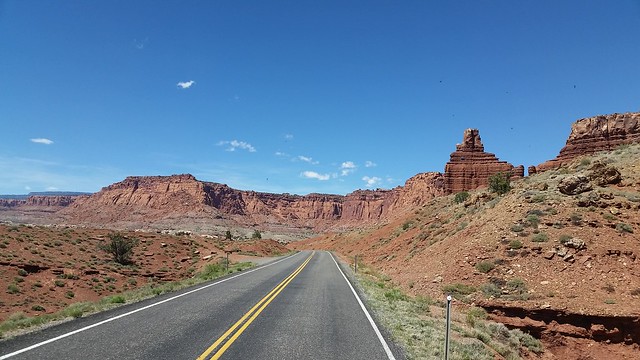 We had a reservation at Thousand Lakes RV Park on the west side of the small community of Torrey.  This is where we stayed during a previous visit this time of year in 2013 and knew the park to be just what we need. 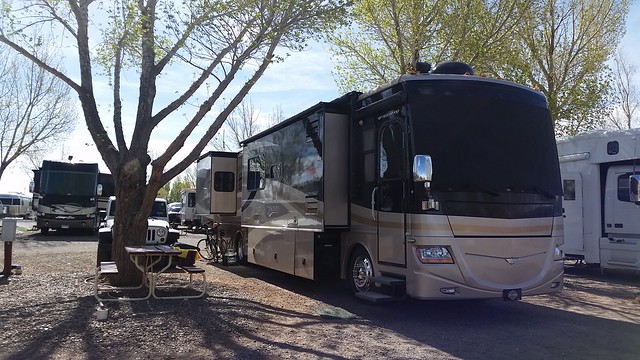 There are great views to the north and south of us at this park. 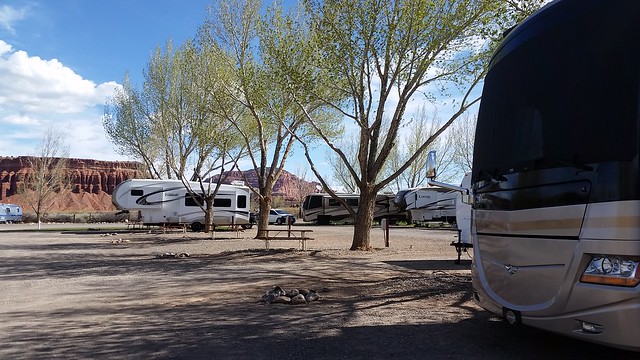 The view to the north 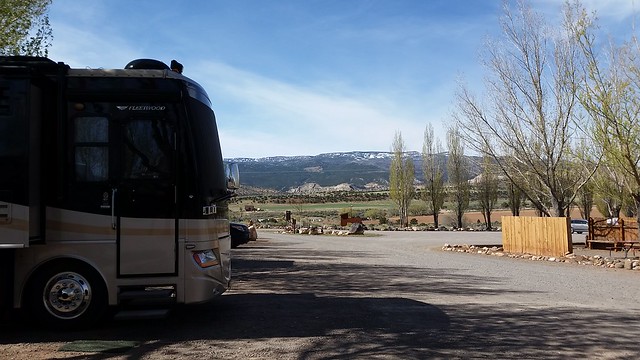 The view to the south

One of the reasons for our return stop in Torrey was to visit our friends, Annette and Larry.  Annette facilitated many summer technology workshops at Pam’s school and was the person who first introduced us to the concept of living full time in a motorhome.  The two lived in a motorhome for a number of years but have built a home near Torrey and no longer have a motorhome.

On our first day in Torrey we made plans to go to dinner with Annette and Larry late in the afternoon so we chose a short hike that would get us back to the motorhome in time to be ready to meet them.  When we were last here, the trail to Hickam Bridge had been made impassible by a rock fall and was closed to hikers.  Since the trail is only about a mile one way, today was the perfect day to check it out.  The trailhead is right along Rte. 24 just a few miles east of the visitor center. 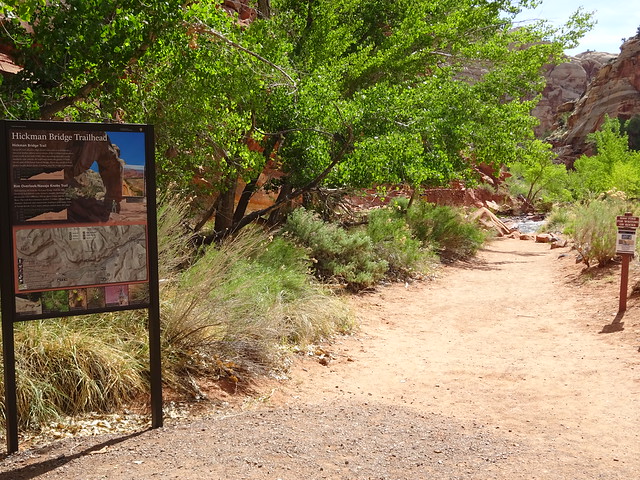 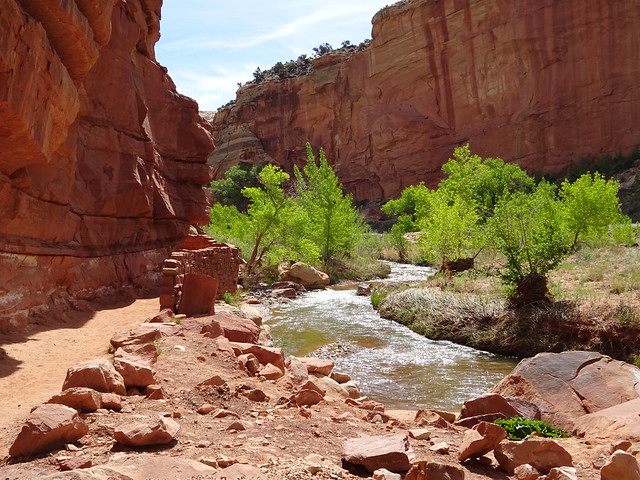 Hiking along the Freemont River 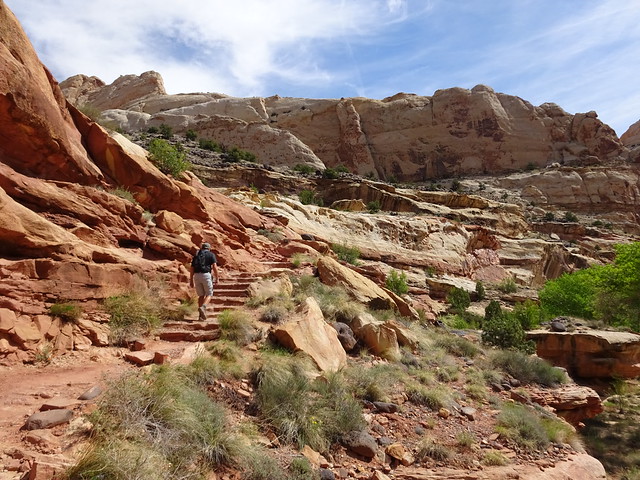 About half way up to the bridge the trail runs next to a couple of small bridges where the water in the wash has eroded a path under the rock. 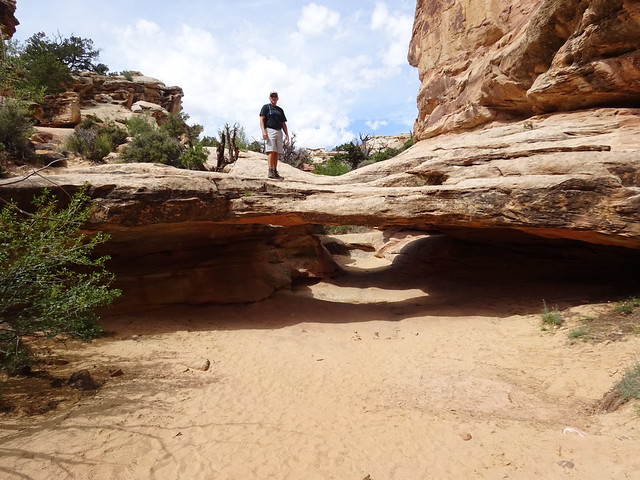 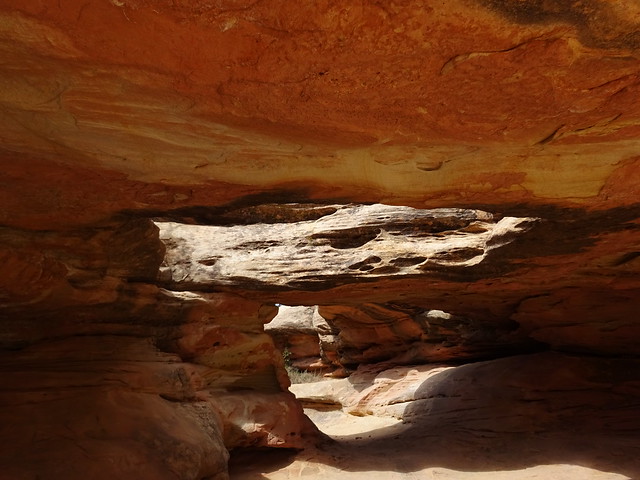 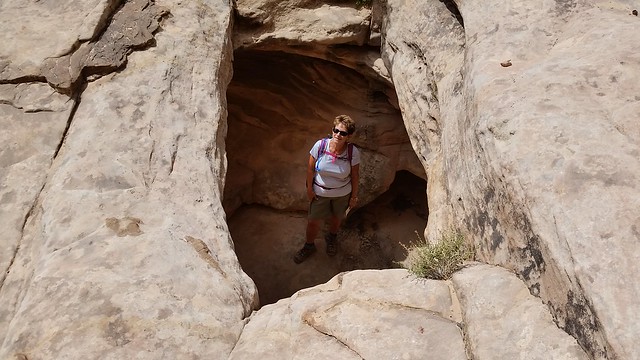 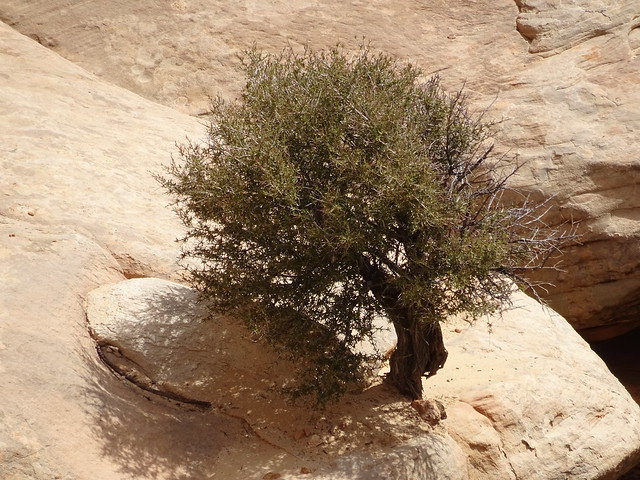 A tree has to be tough to grow around here

A short distance further up the trail the beautiful Hickam Bridge came into view. 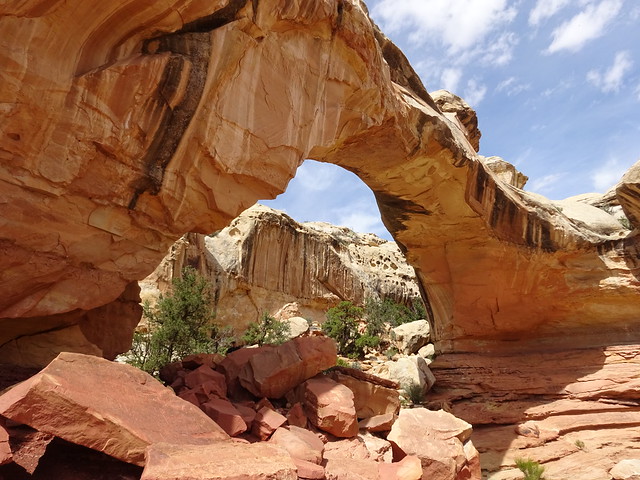 Hickam Bridge (Can you find John just behind the boulders!)

Just before the bridge the trail splits into a loop.  The loop goes right through the bridge then back to the main trail and back down to the trailhead. 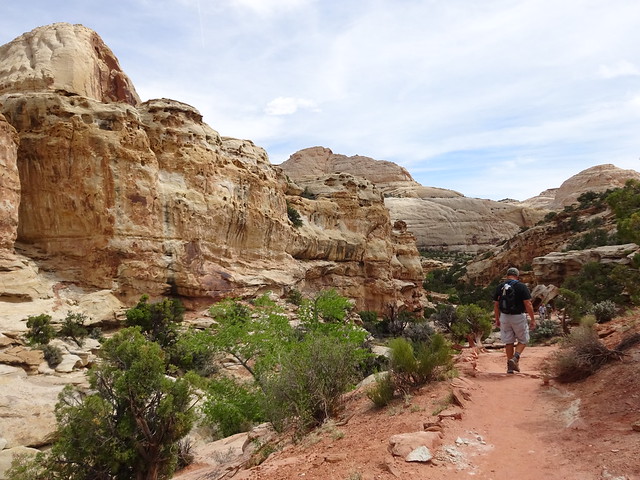 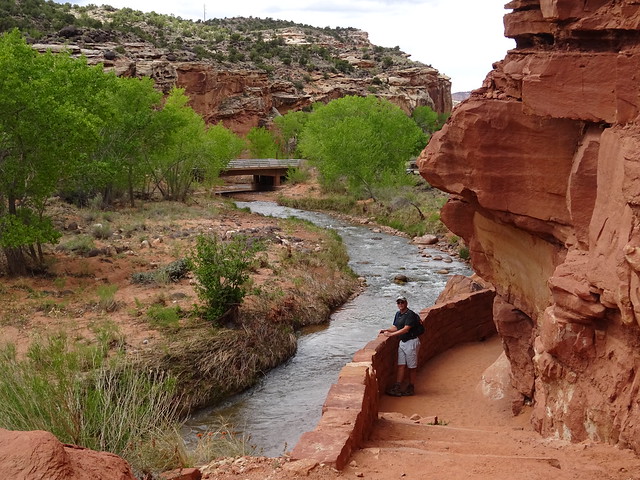 About 35 miles south of Torrey is the little community of Boulder (pop. 180).  When we visited this area two years ago, Larry and Annette introduced us to a small restaurant here, Hell’s Backbone Grill.  It would seem that Boulder has one gourmet restaurant per every 180 people, a better ratio than any town in the country!  We were very impressed with our meal during that visit and were pleased when they invited us to join them for dinner there again this time. This time around the food was just as delicious as we remembered. 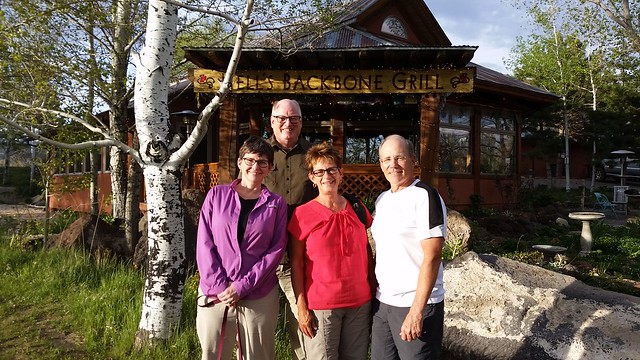 The road between Torrey and Boulder (UT-12) goess up to about 9,000 feet on Boulder Mountain.  It has some great views looking east toward Capitol Reef NP and, if you’re lucky, some wildlife.  We had dinner at a relatively early time so that it would still be light on the return trip.  We drove back just at dusk and were rewarded with great views and spotted some deer and elk near the road. 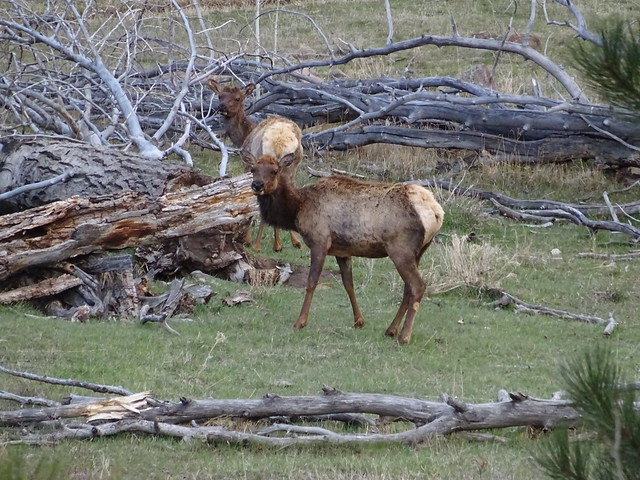 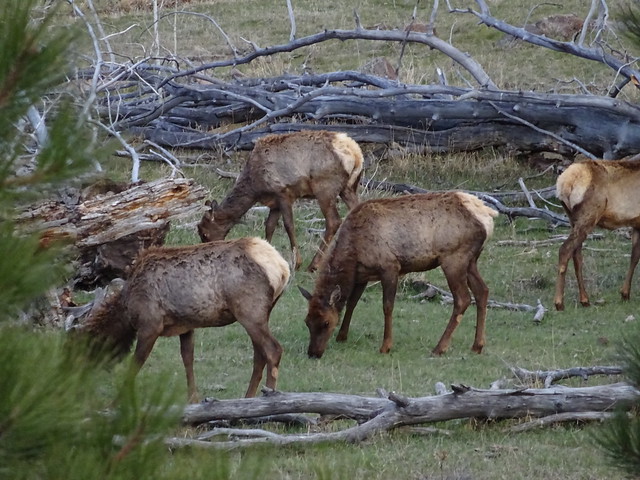 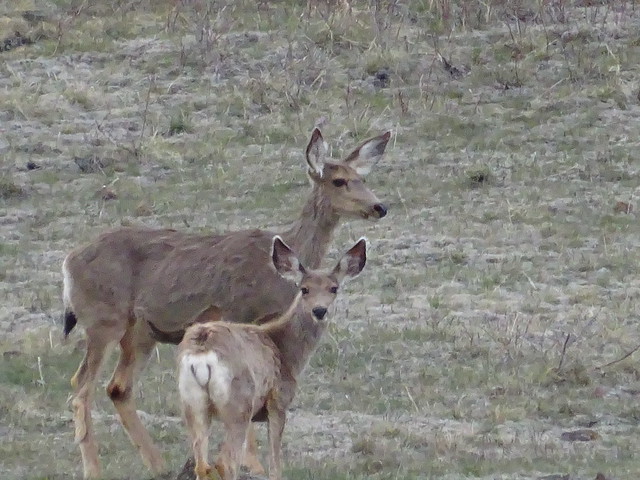 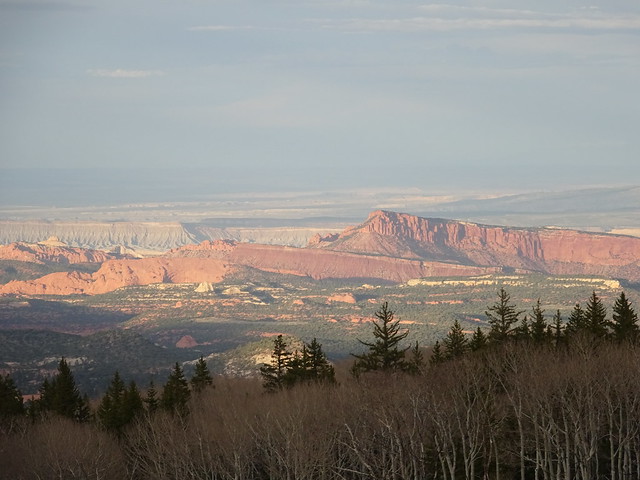 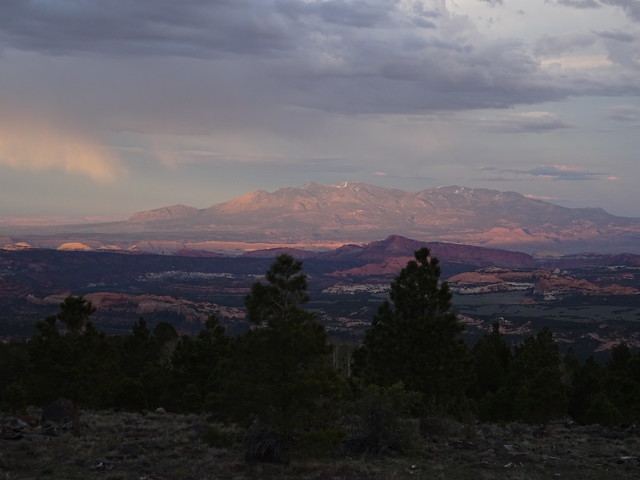 There is much to do and see in the Capitol Reef NP area and we have many adventures planned during our ten day visit.  More on that later . . .

40 Responses to On to Torrey, UT