Our stay in the Moab area is quickly coming to an end.  For our final hike we decided to repeat a trail we did two years ago in Canyonlands NP.  Canyonlands had three districts around two canyons formed by the Green and Colorado Rivers.  For this hike we drove south of Moab to visit the area of the park known as The Needles.  We left Moab before 8:00 AM (mid-day for Paul and Marsha!), as it is quite a long drive to get to this remote area.  From Moab we drove forty miles south on Hwy. 191, then turned west on Hwy. 211 for another thirty-five miles.

Last time we didn’t get such an early start as we had a hike planned of about five miles.  But after speaking with a ranger at the visitor center, we changed plans and decided to hike the eleven miles on the Chesler Park/Joint Trail.  At the half way point during that hike we realized that, at our current pace, we would run out of daylight and still be on the trail.  So the return hike that day was at a fast pace and didn’t allow any time to enjoy the beauty along the trail.

But this year we were prepared and, after a stop at the visitor center to make sure the trail was open (it rained the night before in Moab), we were on the trail by mid-morning with plenty of time to complete the hike. 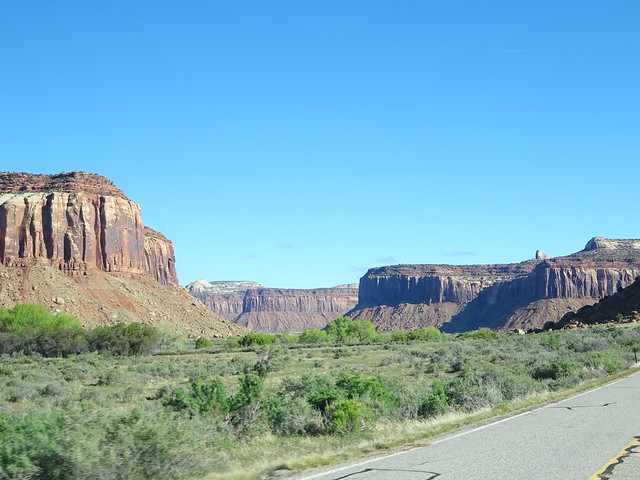 The scenery along Hwy. 211 before entering the park 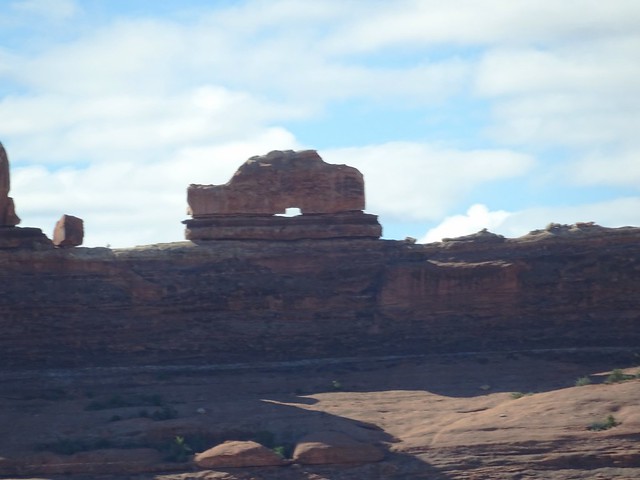 The Wooden Shoe Arch near the visitor center 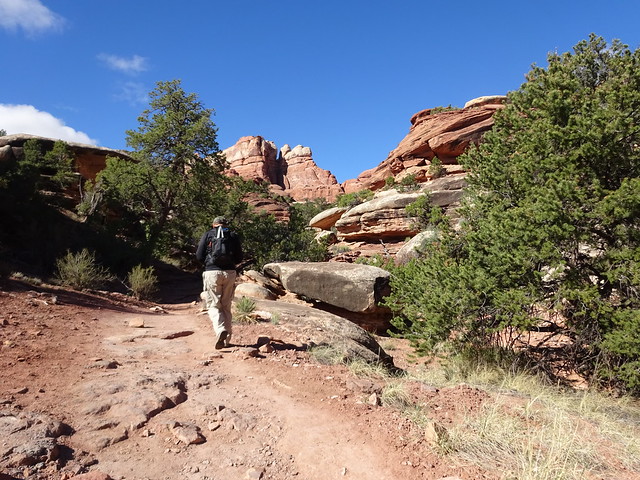 We really enjoy this trail as it has a great variety of trail difficulty and scenery.  As soon as you enter the trail it goes up sharply through gaps in the huge rocks. 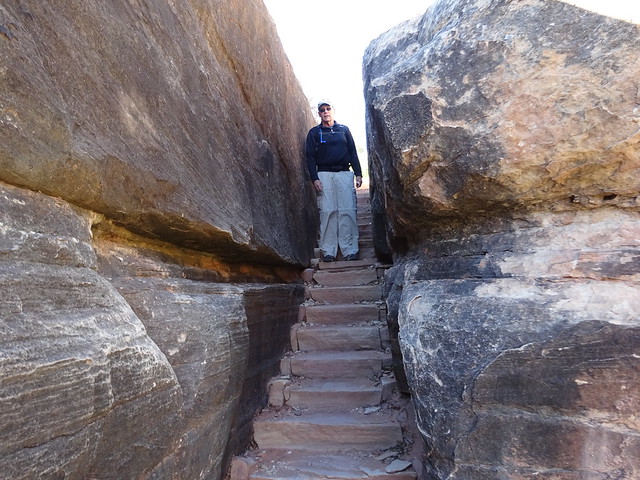 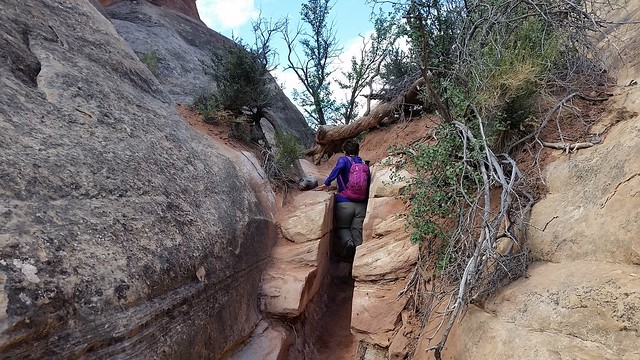 Once through the first set of rocks things flatten out a bit with great views of needle rock formations in the distance. 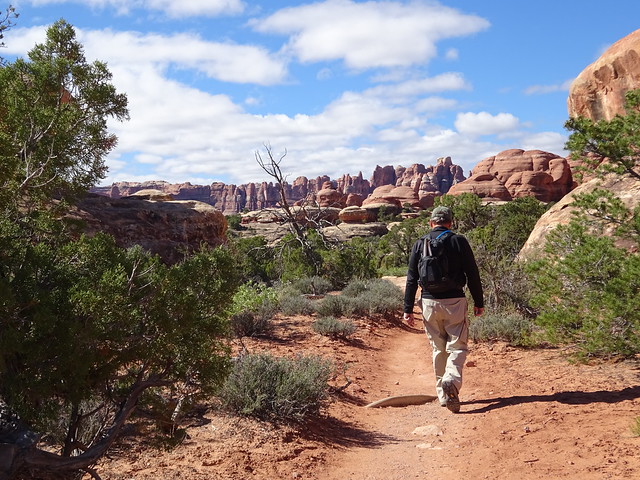 Then it’s back into the rocks going through another narrow slot . . . 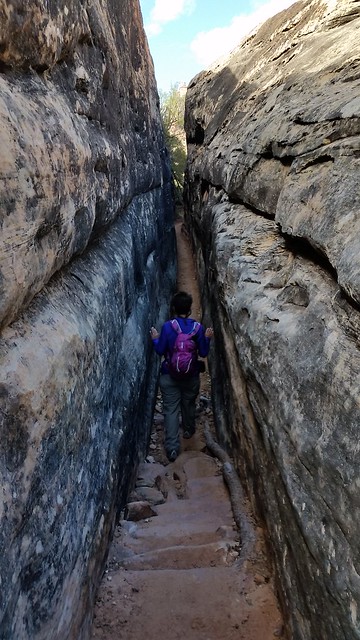 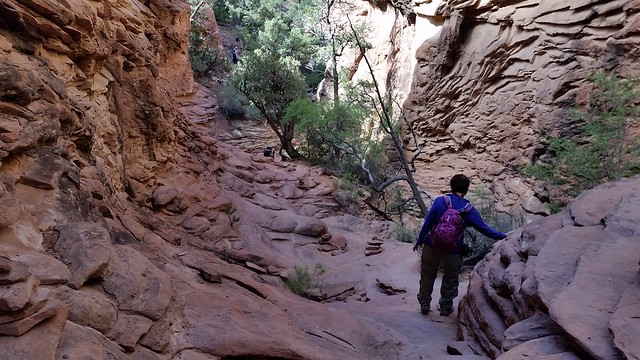 After crossing the wash the trail winds steeply up through more rocks before entering another relatively flat area with beautiful views all around us. 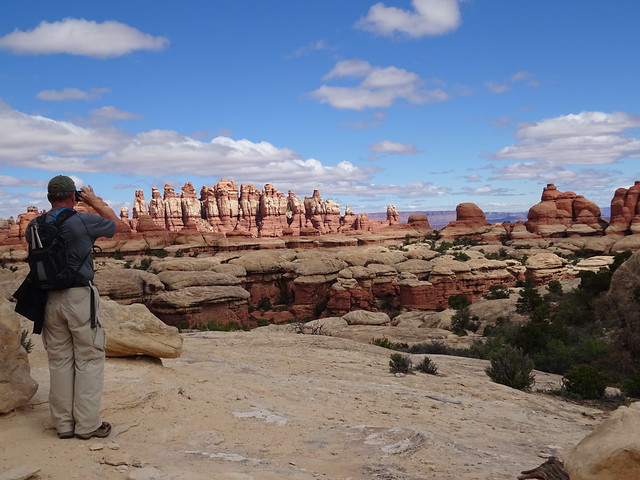 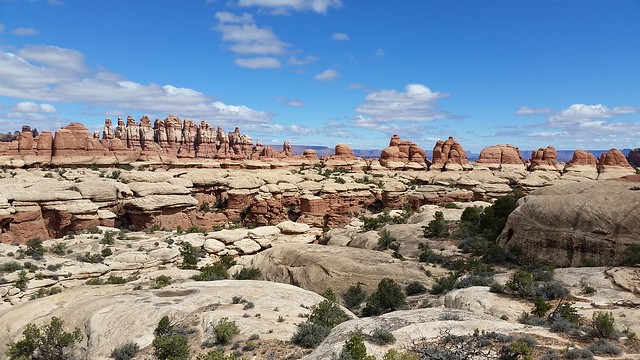 Then it’s back up a steep area, again through the rocks, to the highest point in the hike (no photos we were in total concentration mode).  Here things open up into a wide valley called Chesler Park. At this point the trail splits and provides hikers with a number of options.   We turned to the right on to the Chesler Trail, knowing that we would loop around the “park” and return to this spot after about six miles. If you do this hike, we recommend doing the loop in this direction (counterclockwise) as the views around you are beautiful in all directions as you meander through the rocks going generally down in elevation. 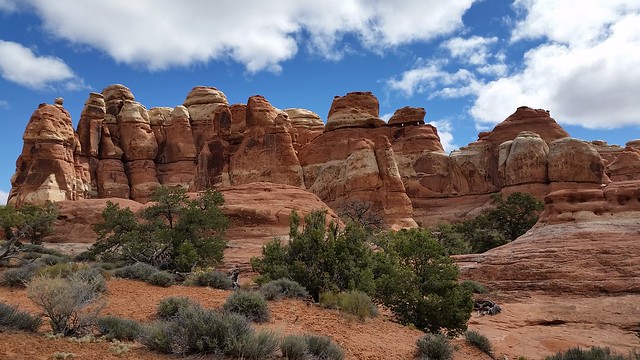 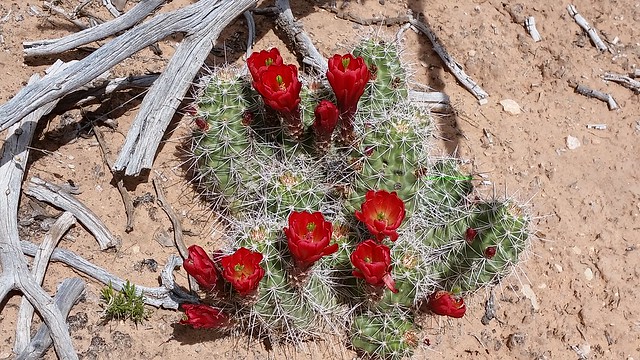 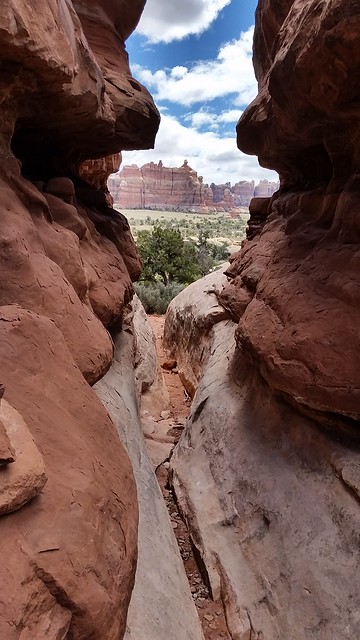 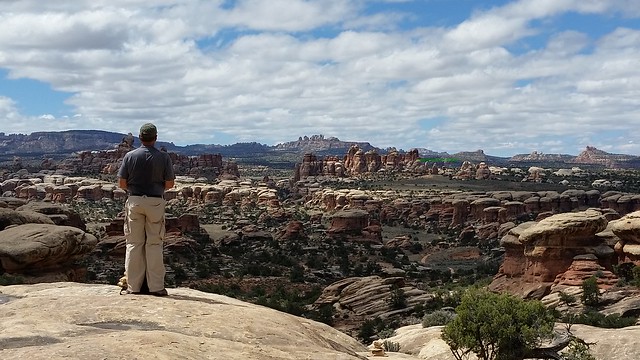 This part of the trail is a bit primitive in spots with a bit of scrambling needed, but nothing too difficult for most hikers. 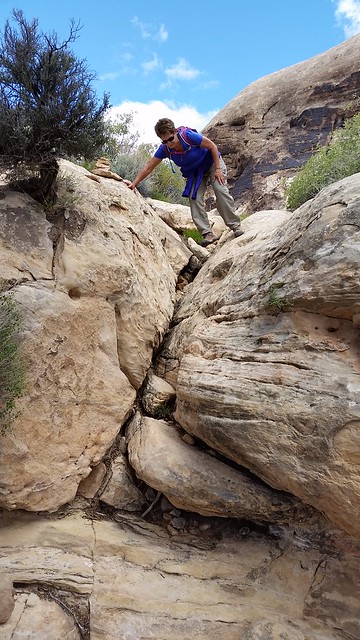 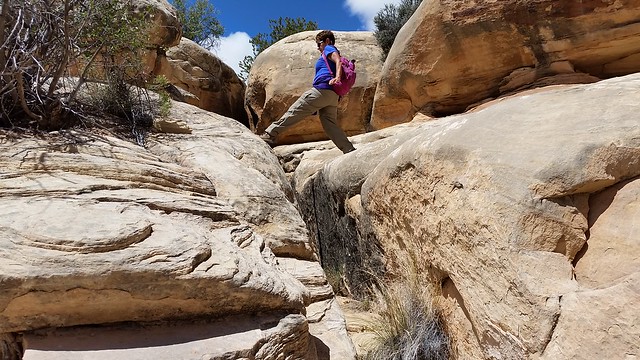 After about a mile through the rocks, we came to a sandy Jeep road that, about another mile, takes you to the trailhead for the Joint Trail. 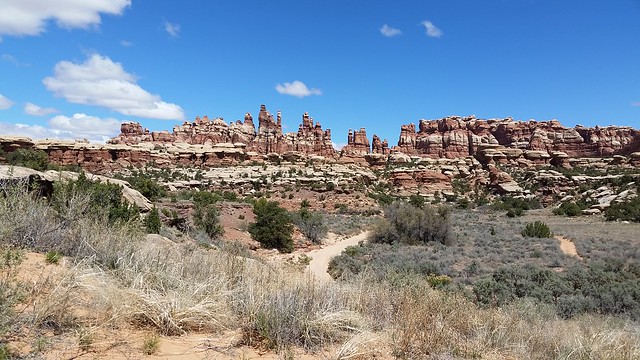 About a half mile up this trail we reached a very cool, long slot area.  First we climbed up a rough set of steps through a narrow passage in the rocks. 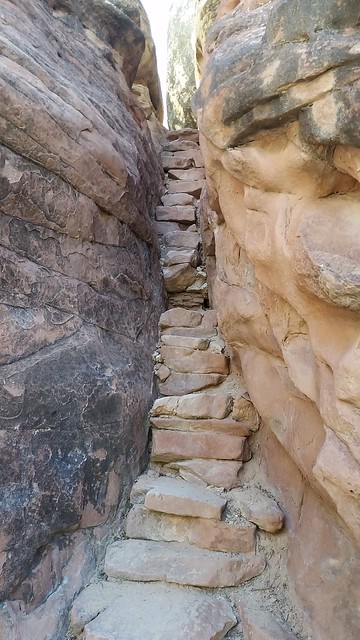 At the top of the steps we entered a wide area where the rocks above us were so close together the area feels like a cave. 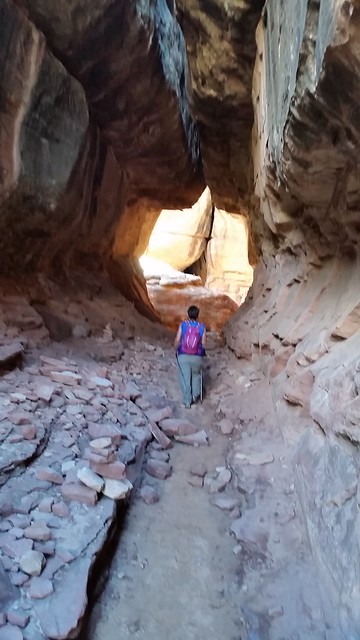 At the end of this cave-like area the trail turns to the left and goes through a long, narrow slot with rock walls soaring overhead. 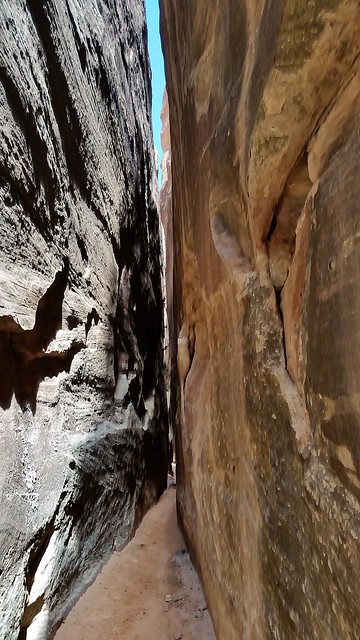 The trail is sandy along the slot except in two locations.  The first requires a short climb up a crude ladder (steps carved in a log). 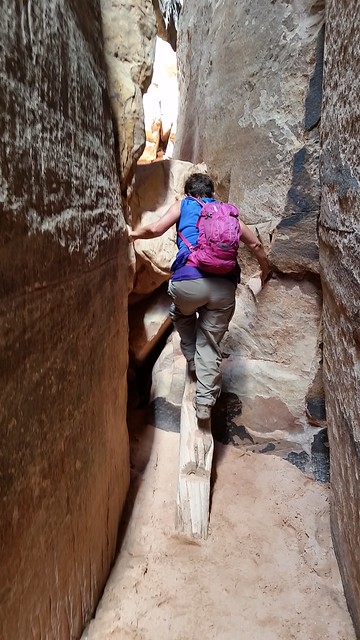 Then there is a brief scramble up some large rocks. 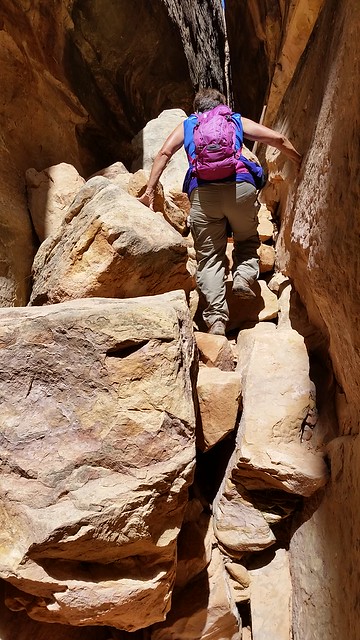 But for the most part, the walk through the slot is on a smooth, sandy flat surface. 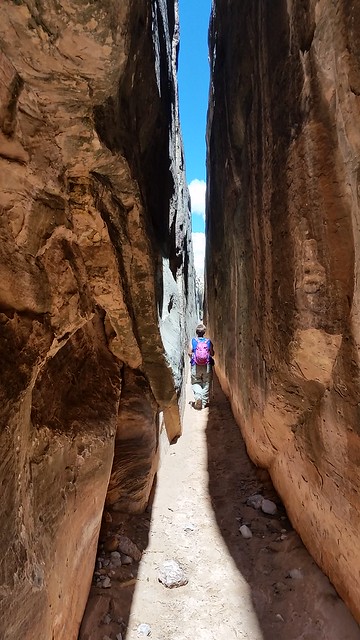 Once out of The Joint the trail goes through a flat, sandy section for about a mile right through Chesler Park. 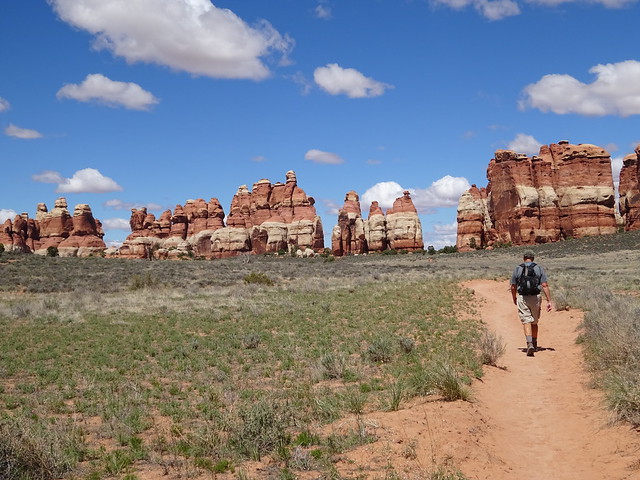 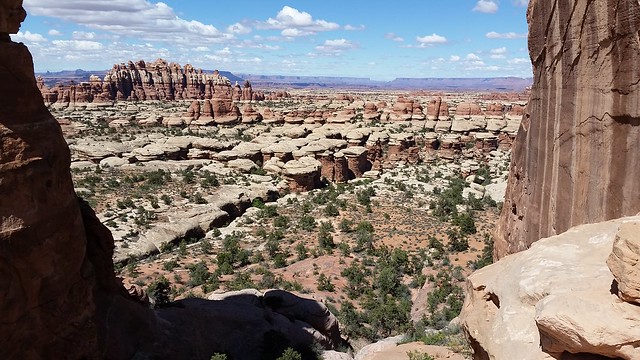 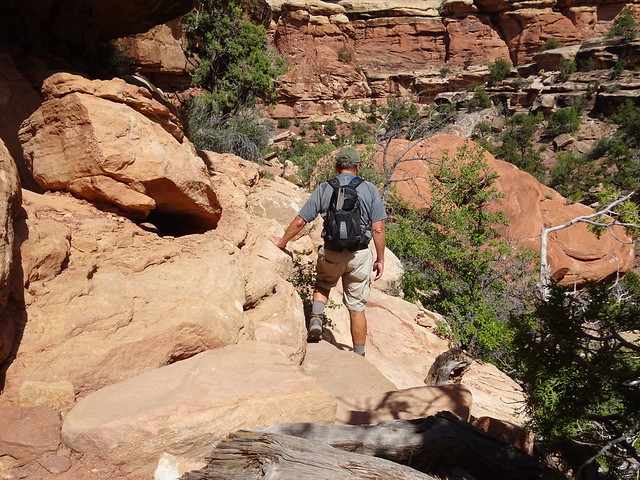 Heading back down from the Viewpoint. 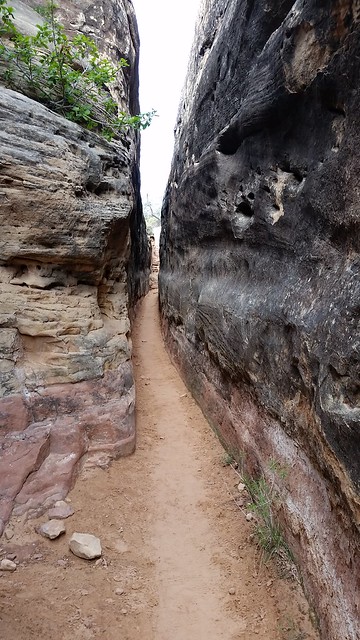 Going back through one of the slots

As we approached the final descent through the rocks to the trailhead, we were treated to one last vista, with the snow-covered La Sal Mountains in the distance. 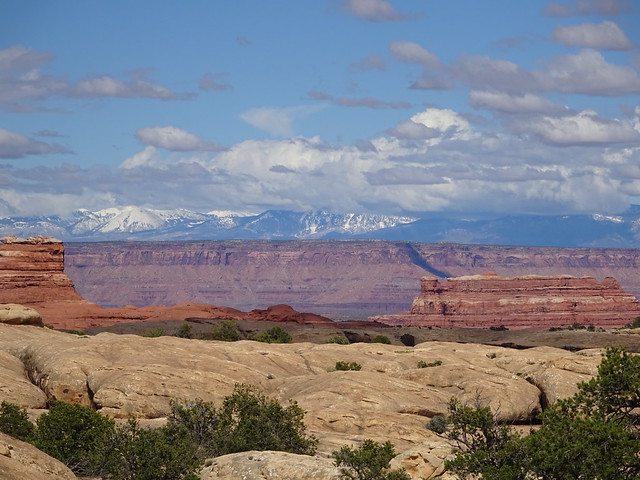 After hiking over eleven miles, we returned to the Jeep in the brilliant sunlight of late afternoon, compared to our last time here when we just made it back at sundown.  We celebrated our day with a nice cold stout and dinner at the Moab Brewery!

That’s it for our visit to Moab this year.  We really like the area and are already planning for a future visit.  But now it’s on to Torrey, UT for a visit to Capitol Reef NP.  More on that later . . .