There has been  a bit of rain in eastern Utah lately, making hiking or traveling Jeep roads impossible on some days.  So one day we picked up David, Karen, and Cody for a ride into the nearby La Sal Mountains on the scenic paved La Sal Loop Road. 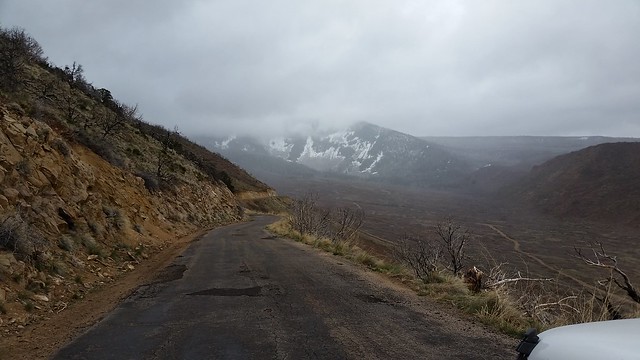 The mountains were covered with a thick layer of clouds and as we gained elevation it began to snow! 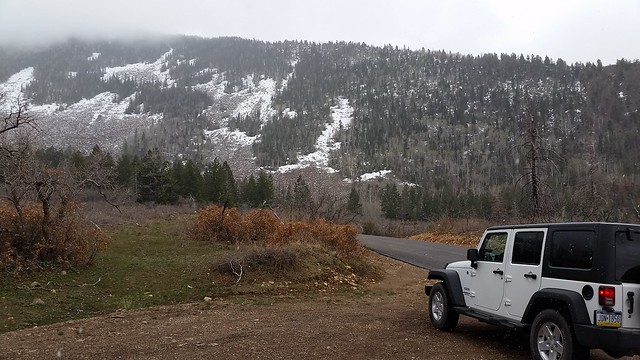 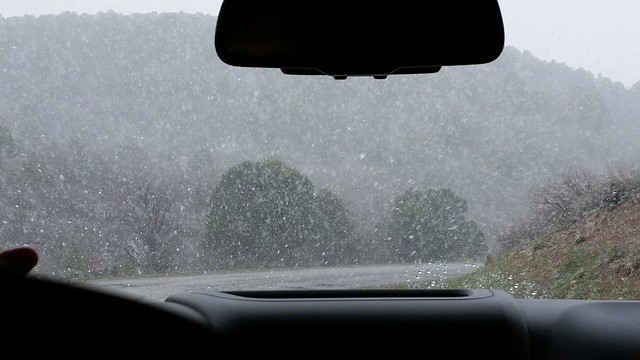 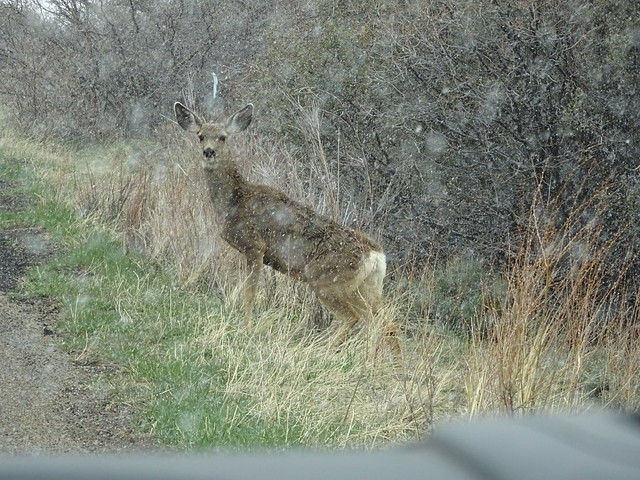 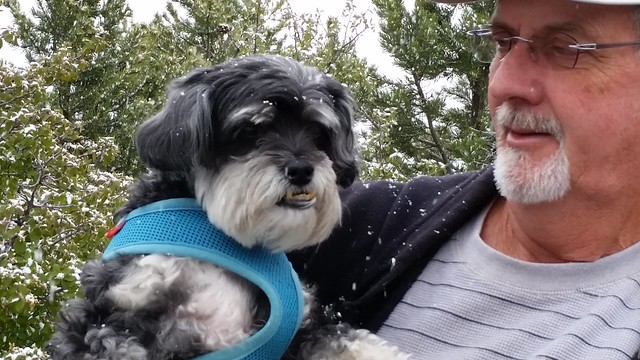 Cody seemed to love the snow 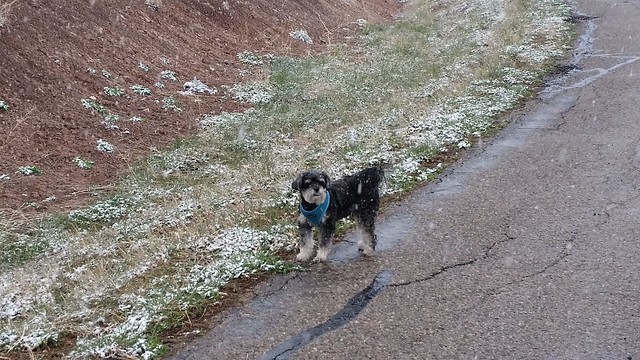 When the skies finally cleared, we headed about fifteen miles north of Moab to hike around the base of an area known as Fisher Towers. 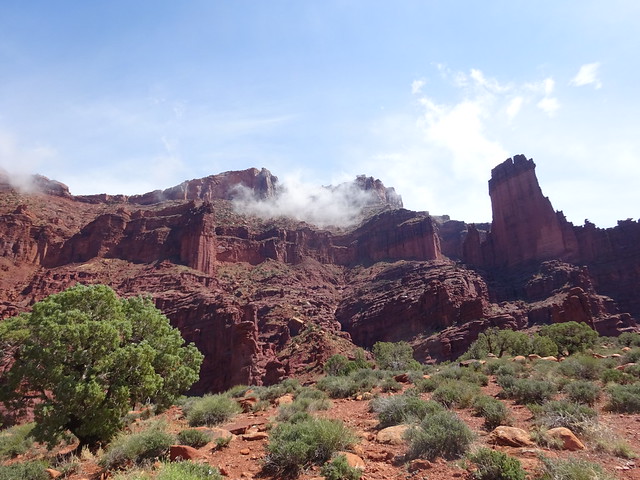 A cloud lingers over Fisher Towers

The hike is a bit over five miles round trip and takes you slowly up and around the base of the towers. 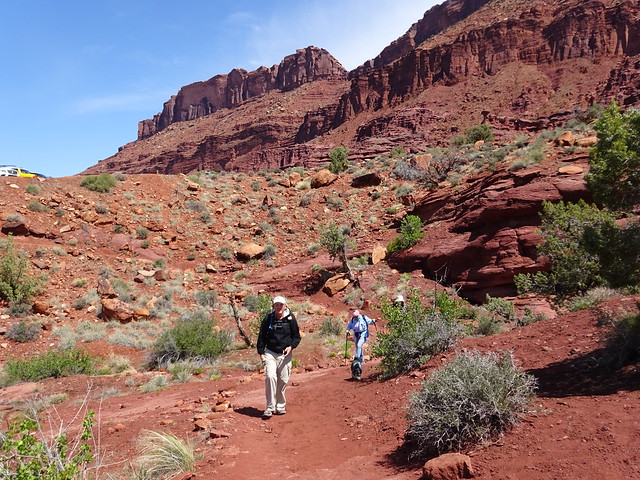 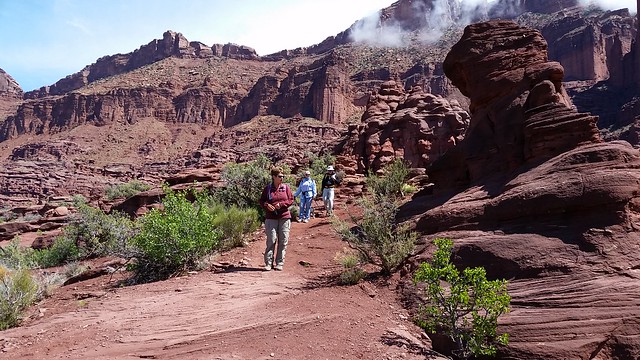 One of the most famous spots in Fisher Towers is a rock peak called Ancient Arts.  It is a favorite spot for rock climbers and was made famous in a 2012 credit card commercial out a few years ago where a girl climbs up and stands at the top while circled by a helicopter.  Check it out here. 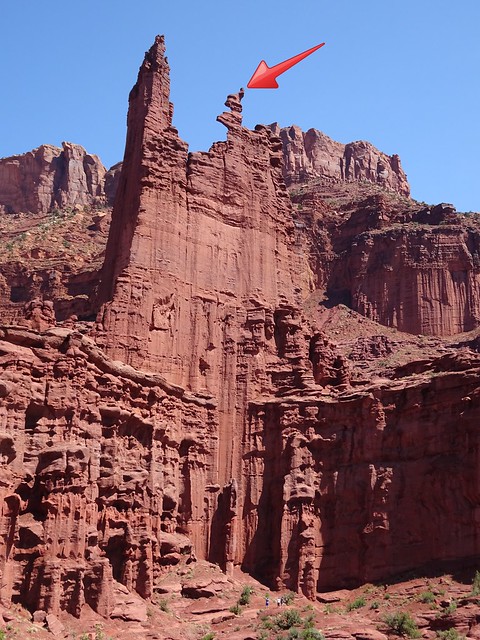 We stopped to rest under Ancient Arts, hoping to see climbers on top.  But we were a bit disappointed that the peak appeared to be deserted.  As we rested John went on up the trail.  We didn’t think anything of it until a few minutes later when one of the group took a zoom picture of the top of the peak.  Wow, how did he do it? 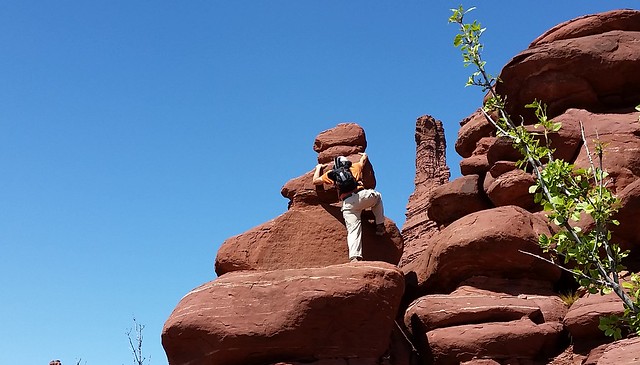 Once John returned to the group we continued up the trail.  At one point a ladder helps you get down the rocks to cross a wash.  Ladders are a bit difficult for some hikers, especially the four-legged kind, so Cody needed a bit of assistance. 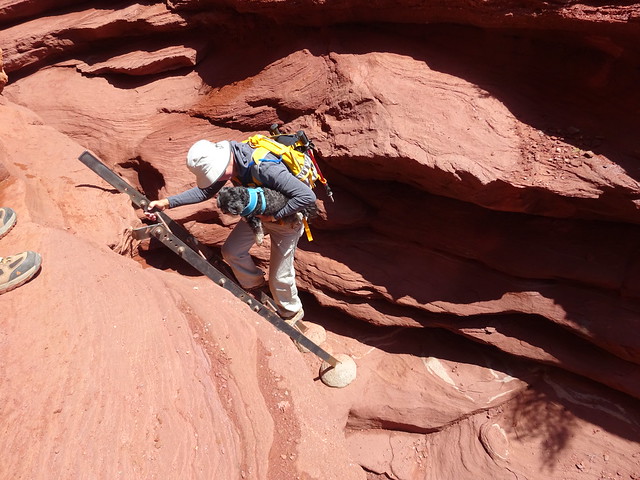 But the rest of the group were able to get down the ladder without any help. 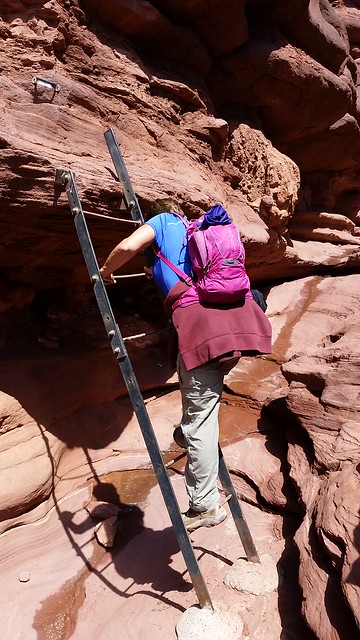 On a large boulder we discovered that we were at the end of the trail.  We knew that because of the succinct  message on the sign. 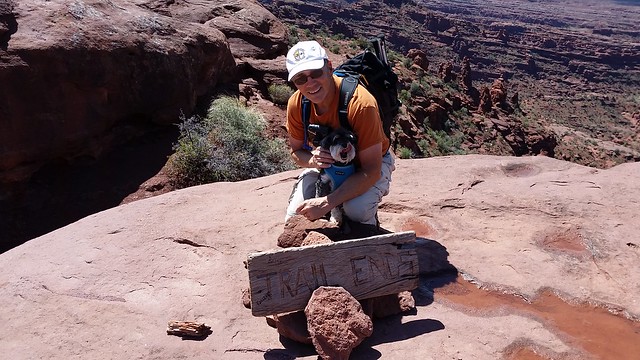 The views from the top were beautiful. 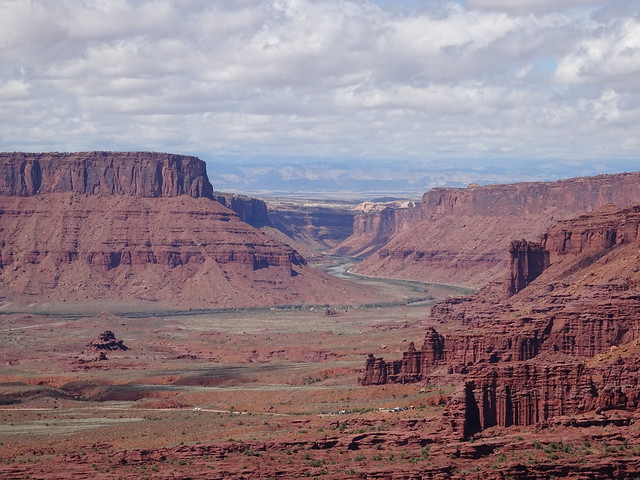 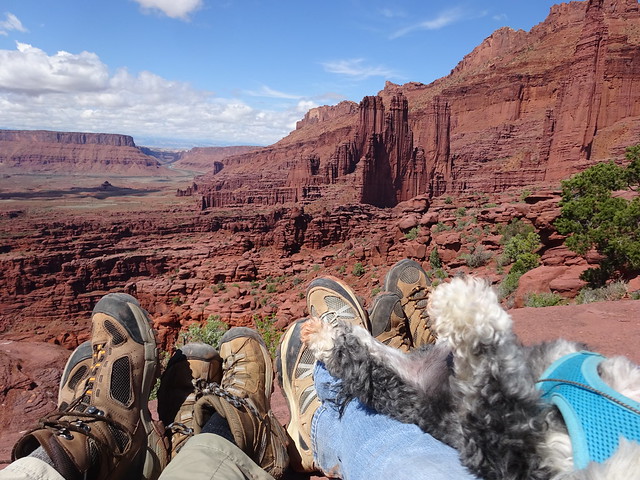 Five sets of feet for “Lunch With a View”

On the way back down the trail there was a great opportunity to recreate the famous scene from The Lion King. 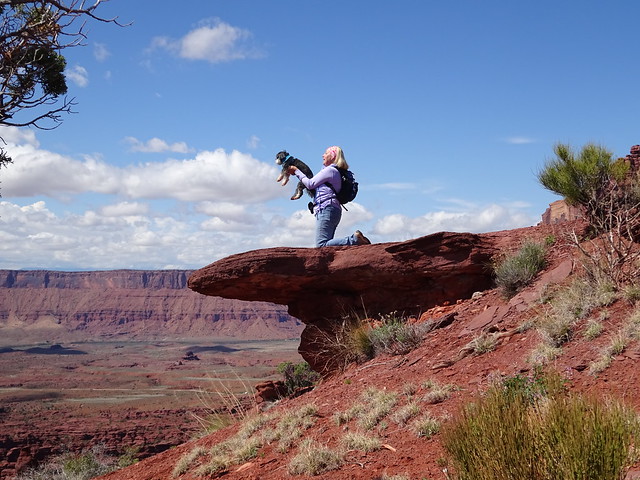 One of the participants appears to be a bit more enthusiastic than the other! 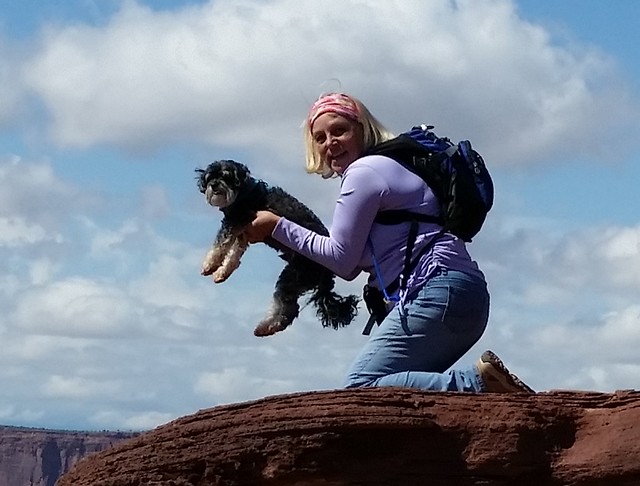 The sheer cliffs of the towers provided great scenes as we hiked back down the trail. 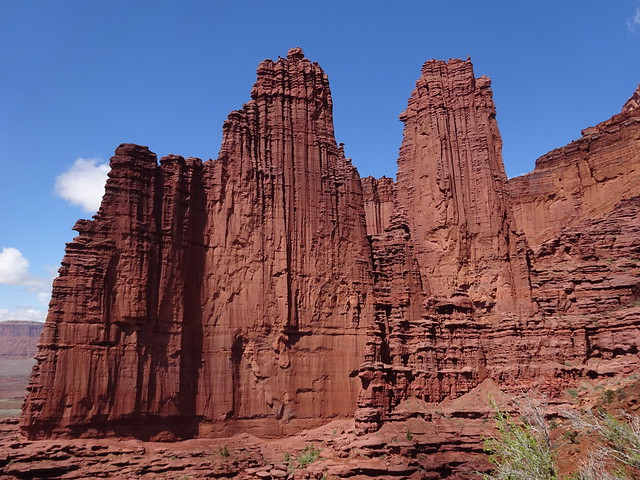 At one point the trail goes right along the base of those towers. 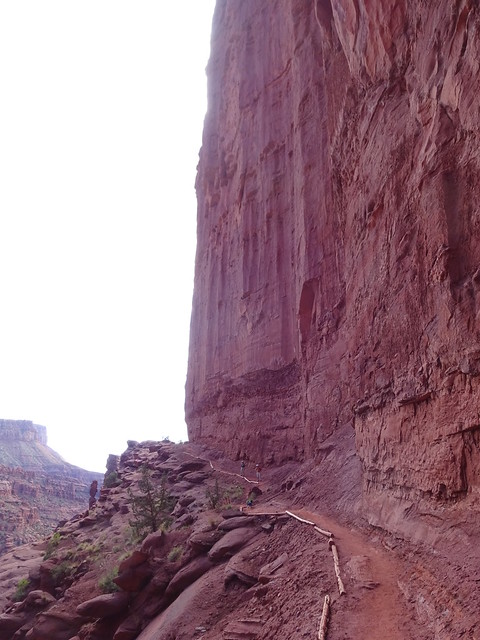 Just after re-crossing the wash with the ladder, we passed two girls hiking up the trail with a pretty big dog.  We informed them about the ladder in front of them and were able to watch them go down it from our location down the trail.  After a few attempts to go around the ladder, they finally were able to get the big pooch down. 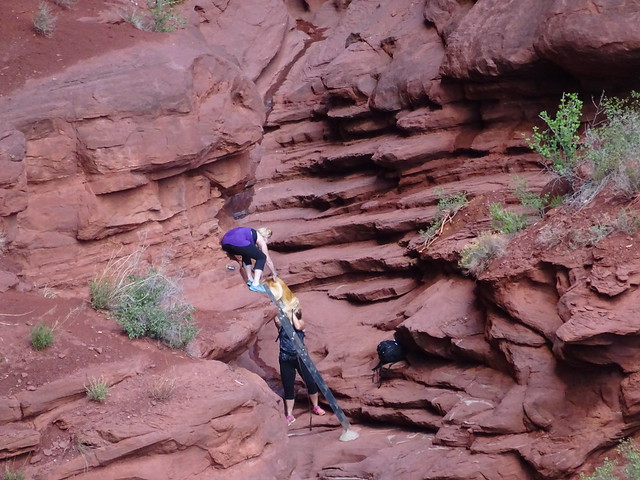 While we watched that action, Cody took the opportunity to enjoy a brief rest in the shade. 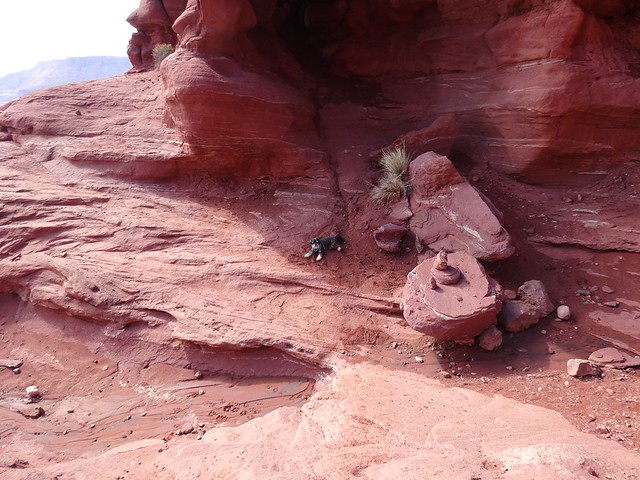 Cody hiked the entire five miles with no problem but he looked a bit exhausted on the car ride back to town.  So it looks like a Jeep trip might be our next adventure to give the little hiker a rest.