On Sunday we made the short move (about 60 miles) from Prescott to Dead Horse Ranch State Park in Cottonwood.  You can take a shorter route of only about 30 miles but that road winds through mountains and large vehicles are prohibited.  Cottonwood is only about 20 miles from Sedona and all the hiking trails in the red rocks.  This is our second visit to this park as we stayed here in October of 2013. 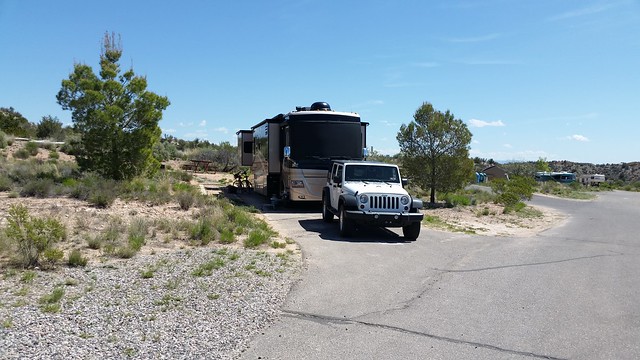 One of the reasons we wanted to return here was to complete the Bear Mountain Trail hike.  This is a challenging trek of about two and a half miles one way up steep terrain.  When we were here previously we began this hike but turned around after a mile.  It was the last day of a ten day stay where we hiked almost every day.  Our legs were worn out and we knew after hiking up the first challenging section of the trail that we couldn’t make it up to the end of the trail.  But this defeat has been on our minds ever since and we returned to Sedona determined to finish the job!

With the Easter holiday approaching the popular trails around Sedona are a bit crowded, so we were up early and arrived at the trailhead about 8:30 (in the morning!).  We took the photo below in the parking lot not knowing at the time that the end of the trail was that point far in the distance. 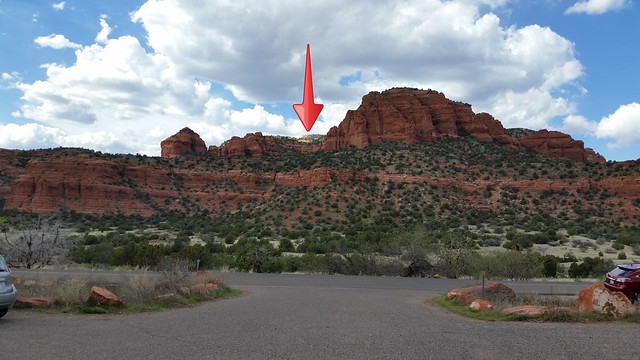 As we said, the trail is not that long, two and a half miles one way, but it has an elevation increase of about 2,000 feet! 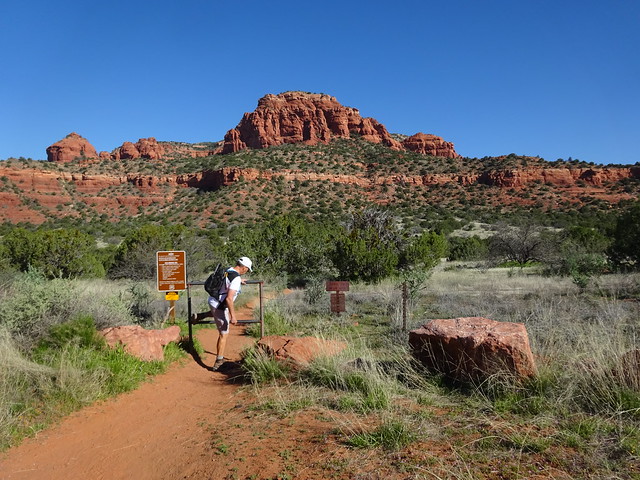 Entering the trail through a cattle guard

A long list of rules at the trailhead warn hikers that this hike is not for the faint of heart. 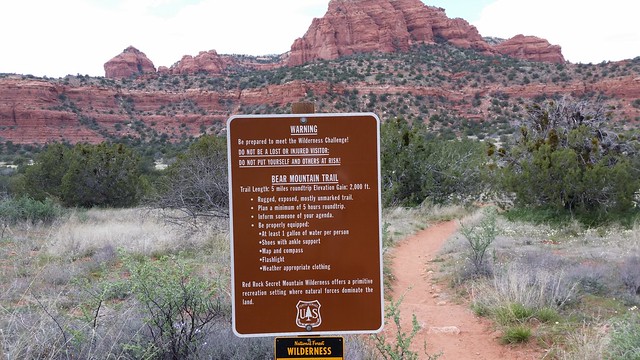 The first quarter mile is over fairly flat terrain.  But things quickly get a bit vertical as the trail goes up the first steep wall of rock. 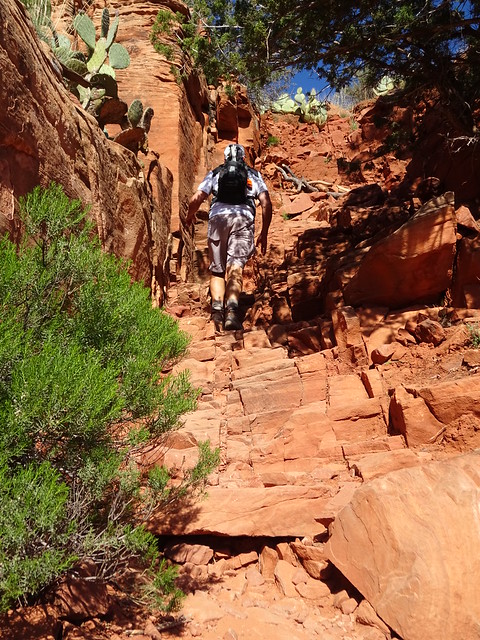 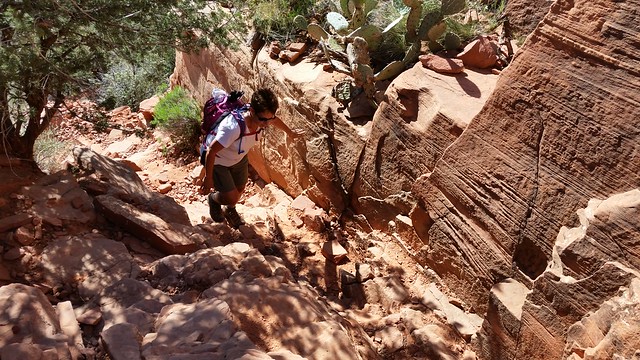 As we approached the top of this knoll (shown below), we thought maybe the most difficult part of the climb was over. 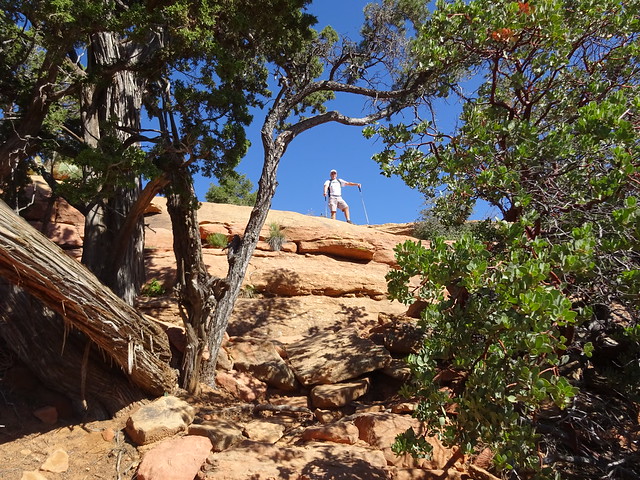 But as we looked to the north we could see that our destination was still a long way off. 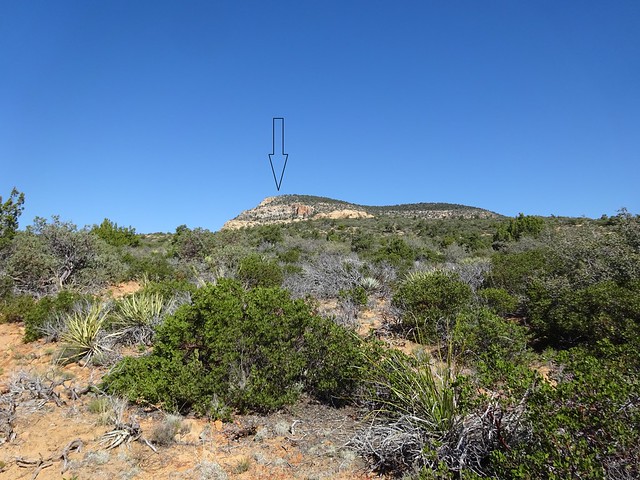 But the views behind us were beginning to get interesting. 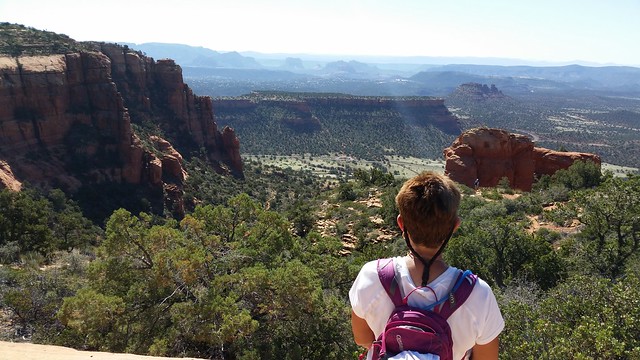 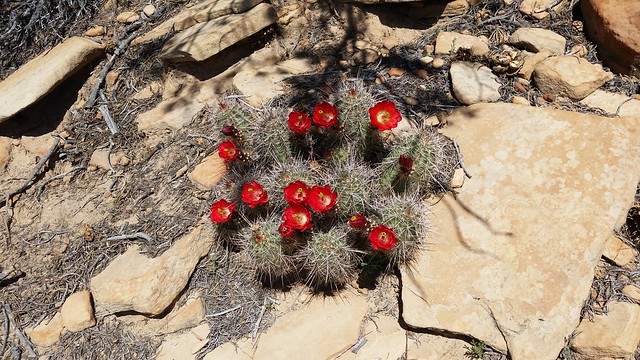 After a brief rest to enjoy the view we continued our climb. 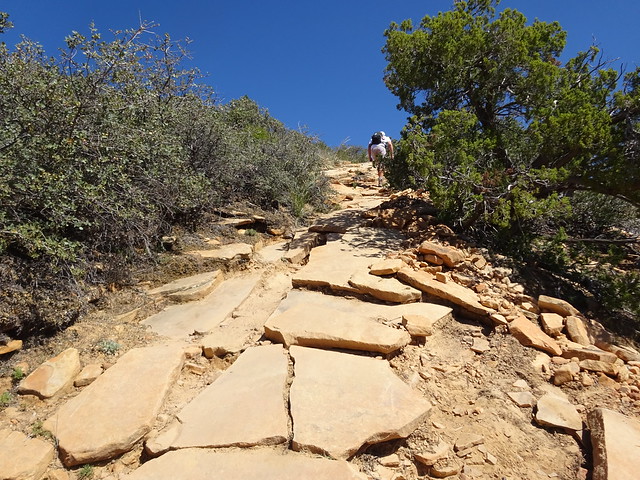 The photo below leads you to believe we reached the summit of the trail. 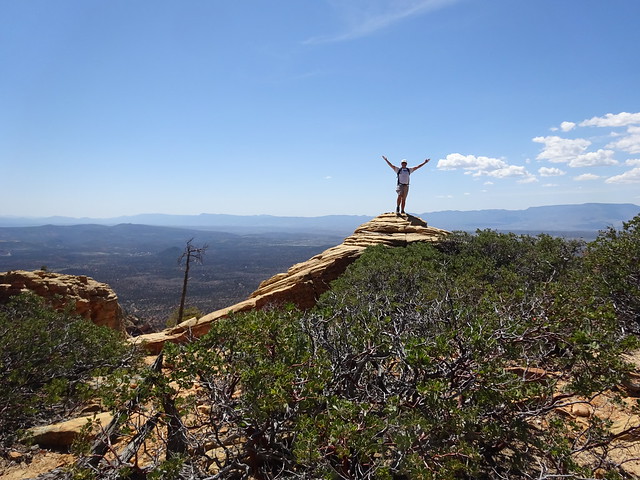 But no, the summit was still a long way away! 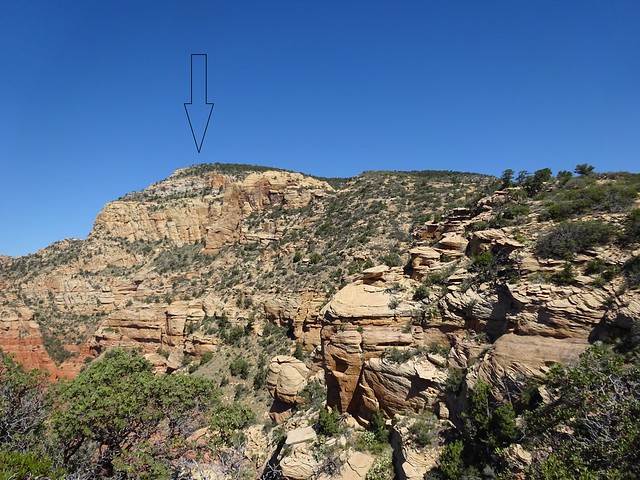 Finally we reached a point just below the top of Bear Mountain where you find the best views of the red rocks of Sedona. 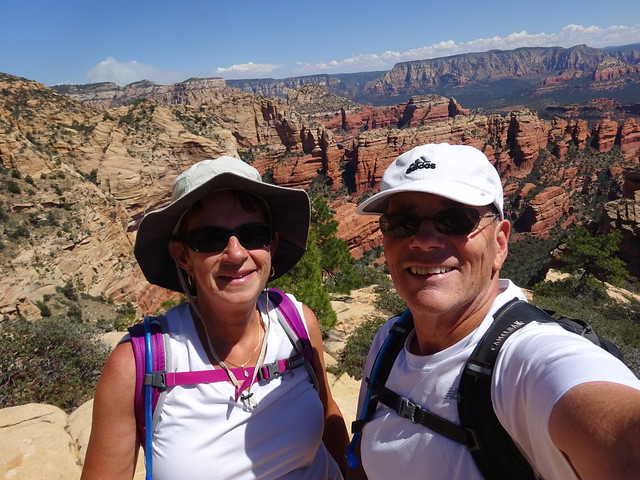 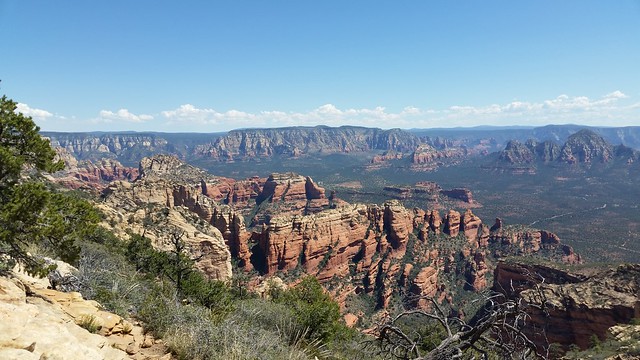 We sat on a rocky ledge enjoying lunch with a fantastic view. 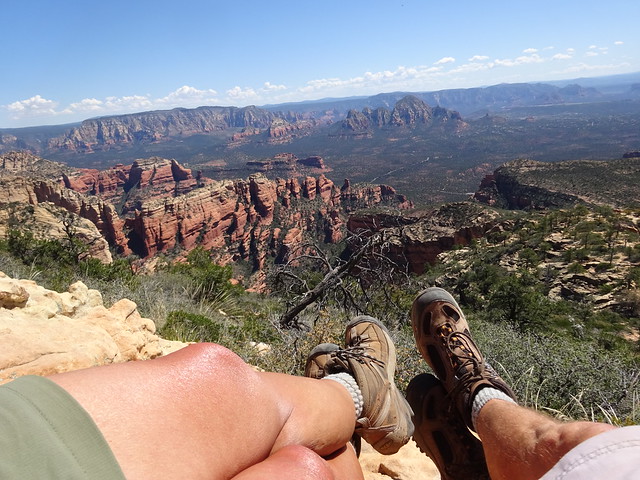 We had been told that the point where we enjoyed lunch was a good point to stop, as the view from the top of the mountain, two tenths of a mile further up the trail, was not as impressive.  So Pam remained there to rest her still sore leg, while John continued up to the summit. 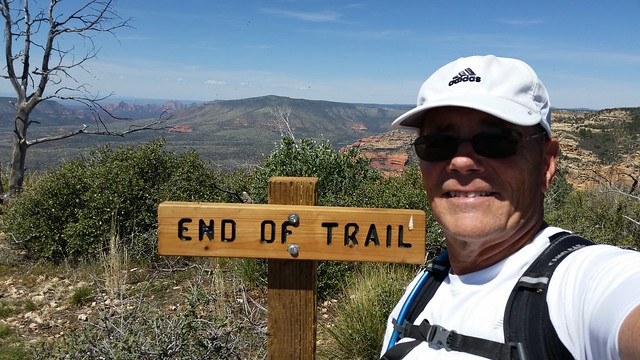 Our information was correct, the views from the top were not as impressive as those down where Pam rested since you can’t see back into the red rock canyon.  But at that altitude you still had great vistas to the west.  Also, in the distance John could see the ring that is the parking lot, although he couldn’t make out any vehicles from that distance. 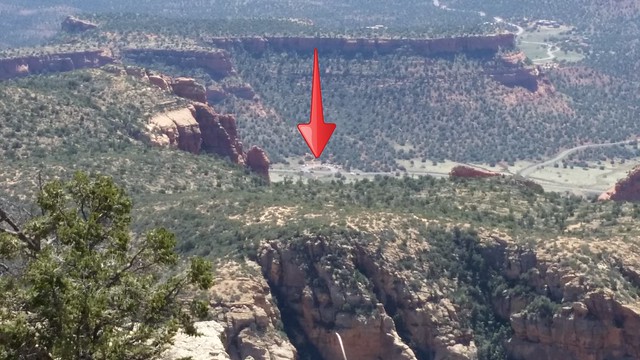 The view back down to the parking lot

After a nice rest enjoying the fantastic views it was time to head back down the mountain. 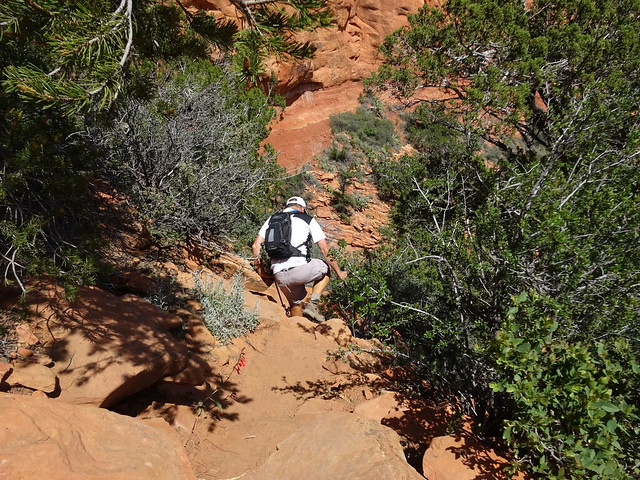 On the trip down it appeared to us that the trail was steeper than it was going up!  This made for a painful trek for someone with a sore leg, but the nimble hiker just kept moving. 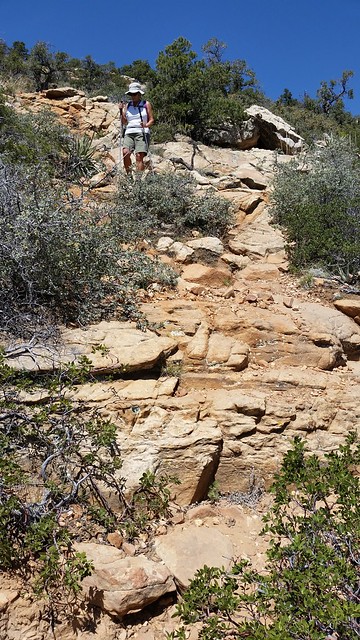 As we made our way down, we could see the trail winding along the rocks below us. 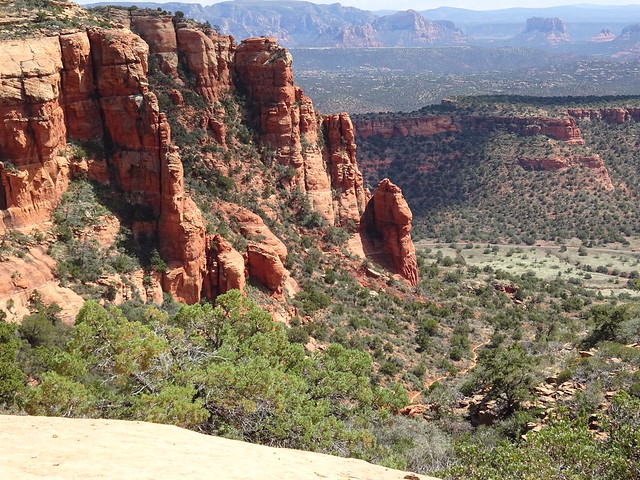 OK, cross this one off the list!  It took us two years but we finally got to erase the defeat we suffered when we didn’t complete this hike.  But now we understand that it was a good decision at the time.  After seeing what was ahead of us beyond the spot where we turned around, we know we would have never made it.  Even today, while beginning the hike in a well-rested condition, having much more hiking experience, and being in much better physical condition, this hike still left us exhausted.

Now we are looking forward to meeting up with Florida friends, David and Karen.  They own a site in beautiful Holiday Cove in Cortez where we have stayed during three winters. While they have a beautiful fifth wheel on their site in Holiday Cove, they are on a trip to the west towing their little Casita trailer.  We’re looking forward to spending some time with them over the next month, but the real reason we want to meet up with them is to spend some time with Cody, their little Maltipoo dog.