This past Sunday morning we pulled out of our site in Apache Junction and drove about a hundred and forty miles north to the beautiful town of Prescott.  The temperatures in the Phoenix area were getting a bit high so we look forward to cooler temperatures, since Prescott is over five thousand feet of elevation (compared to the seventeen hundred at Apache Junction).  We are now enjoying a nice site in the Point of Rocks RV Campground just north of town. 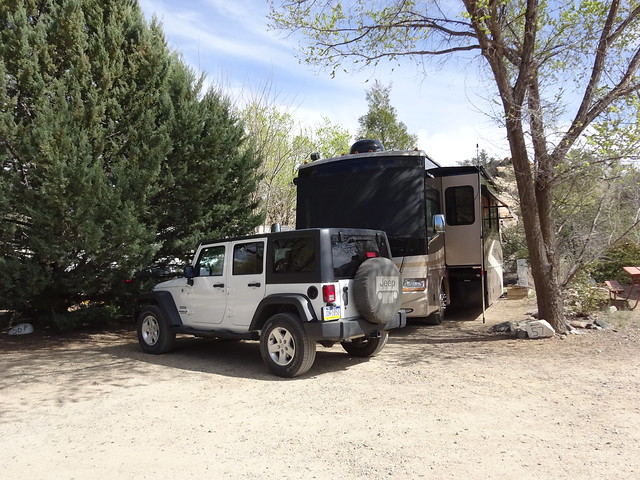 The park is located in the middle of an area known as Granite Dells.  The Dells consist of exposed bedrock and large boulders of granite that have eroded into an unusual lumpy, rippled appearance. 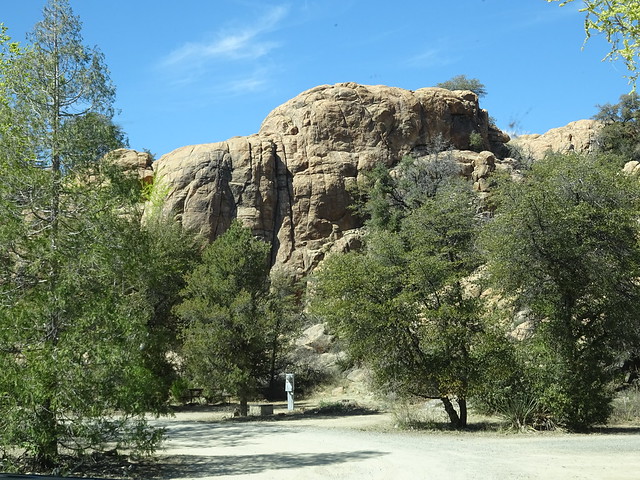 The view out the front windshield

Right behind us is one of two reservoirs in Granite Dells.  Watson Lake was formed in the early 1900s when the Chino Valley Irrigation District built a dam on Granite Creek.  The City of Prescott bought the reservoir and surrounding land in 1997 to preserve it as recreational land.  The city maintains a large number of hiking/biking trails all around the area and by connecting four of the trails we were able to hike completely around Watson Lake for six miles including side trails . 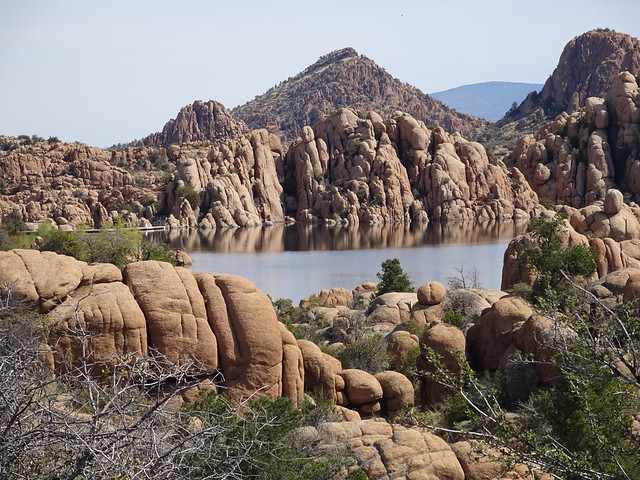 Our first view of Watson Lake from the trail

While there is a severe drought in the west this reservoir is filled to capacity, as shown in the photo below taken at the south end of the lake (the dam is at the north end). 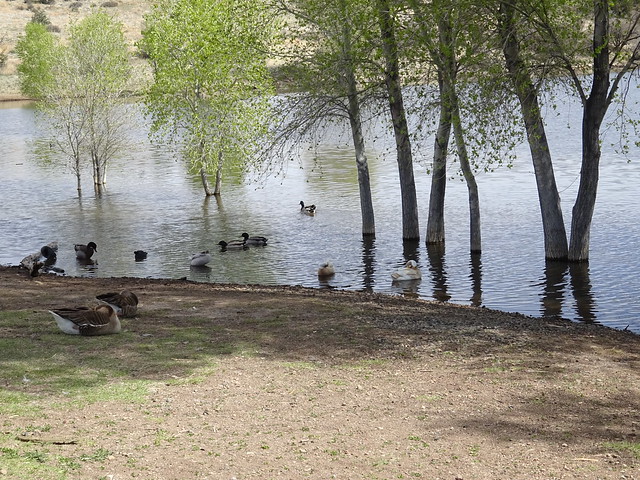 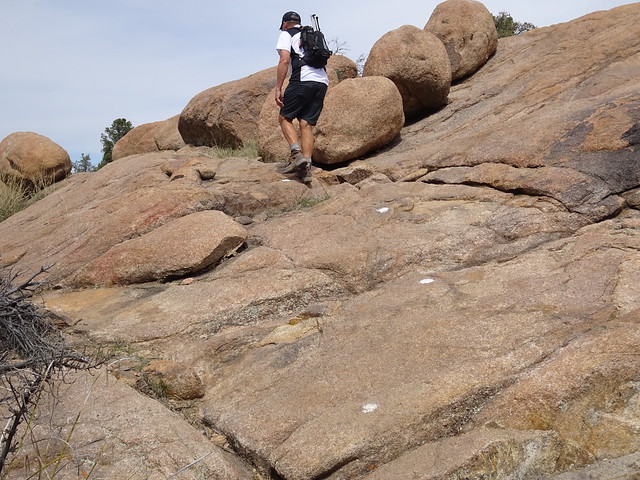 The trails are also used by mountain bikers so the path within the rocks is marked with painted white dots, making it easy to follow across the open rock areas.  The views through this area are very impressive. 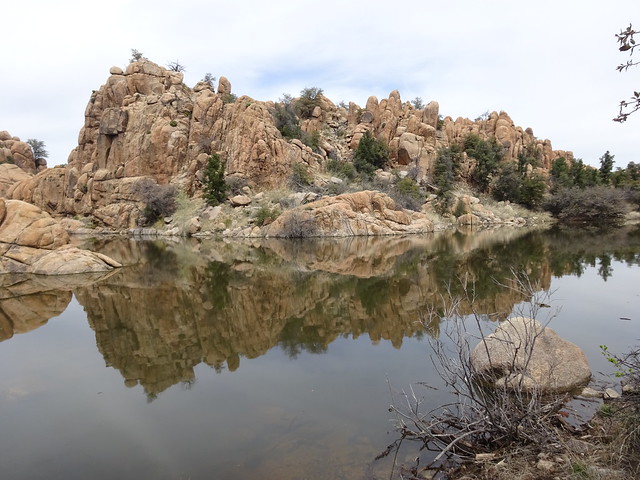 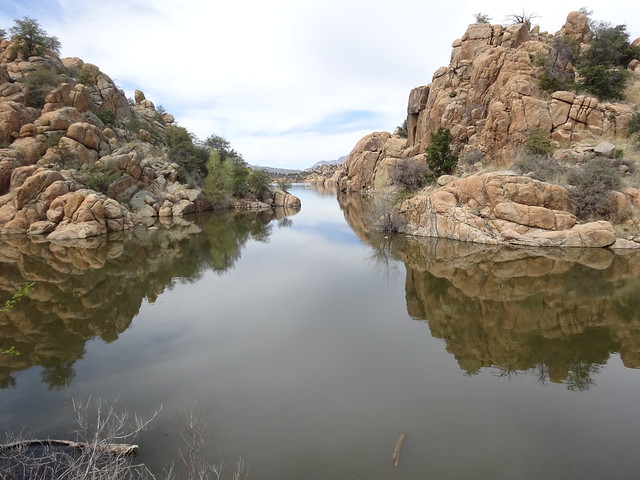 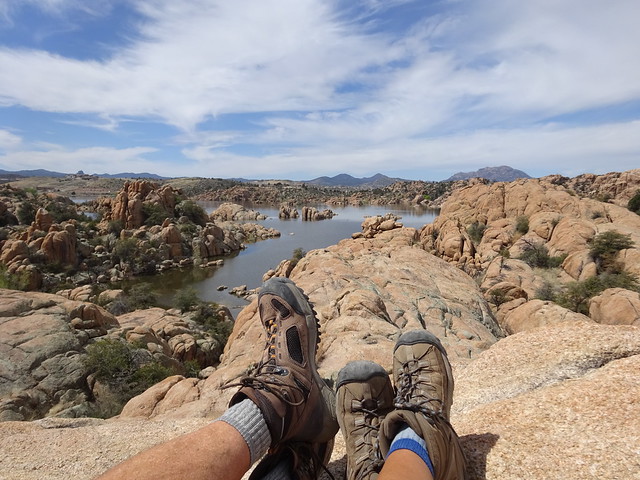 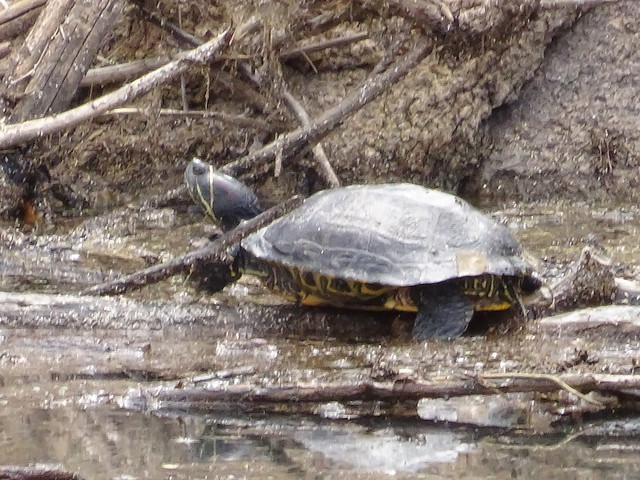 At the north end of the lake as the trail turns back to the south, it goes down into a couple of canyons with creeks at the bottom.  Boulder Creek was pretty full and presented a bit of a challenge as we crossed it since the water was moving quite swiftly. 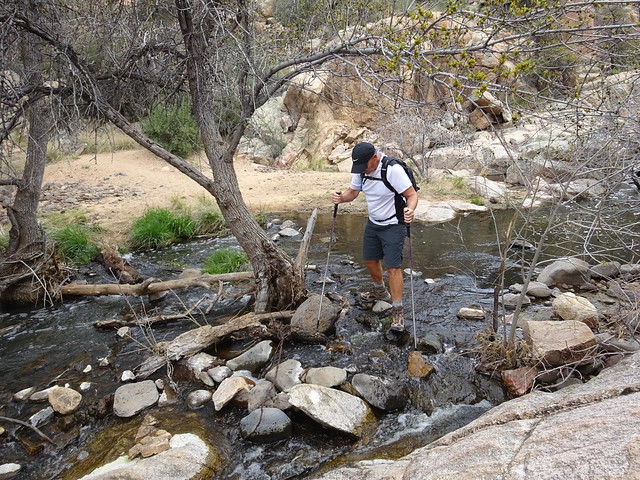 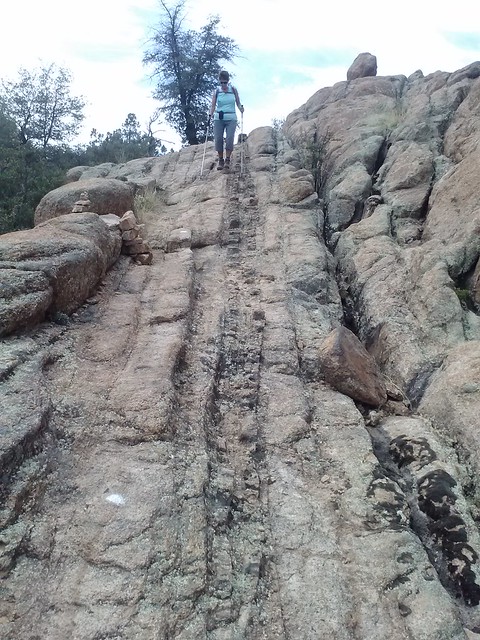 Heading down into one of the canyons

As we hiked our way south, we came to the base of the Watson Lake Dam.  Built in the early 1900s, this dam blocks Granite Creek creating the lake. 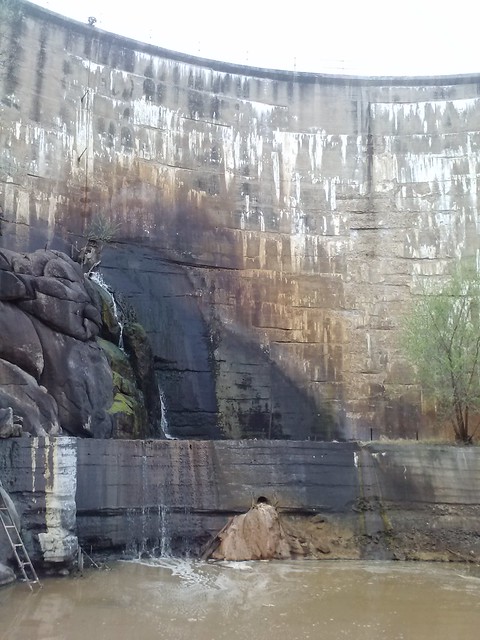 We continued south on the trail as it made its way steeply up to the top of the dam. 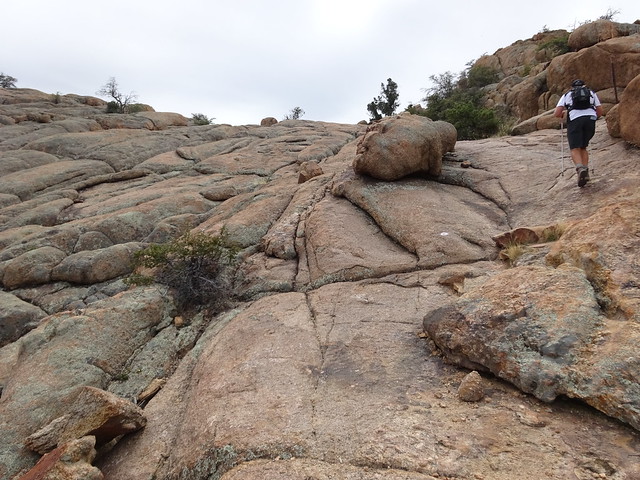 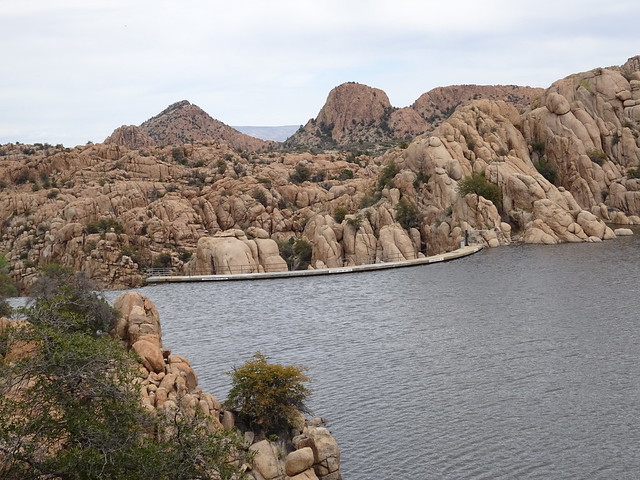 The top of the Watson Lake Dam

The day after hiking around the lake we decided to get on to the water for a different view of the rocks of the Dells.  So we inflated our Sea Eagle kayak at a nearby boat launch and headed out on a beautiful sunny morning (OK, it was late in the morning). 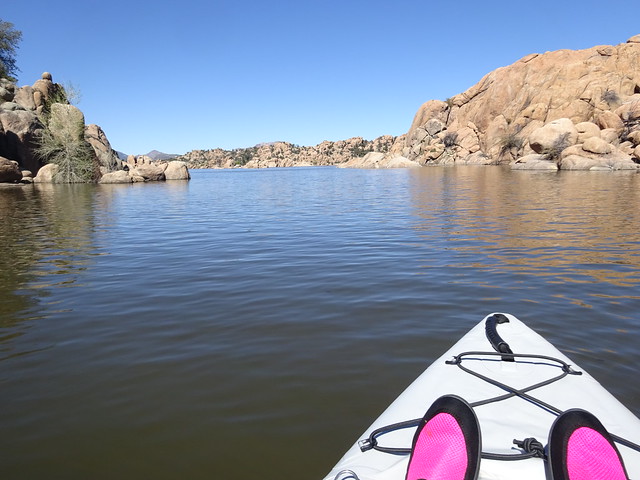 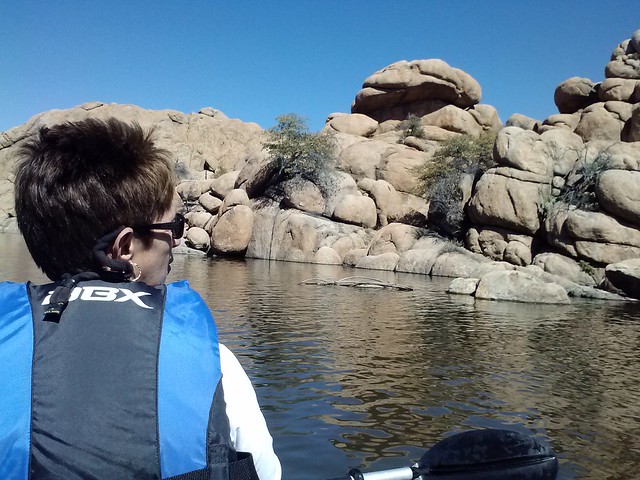 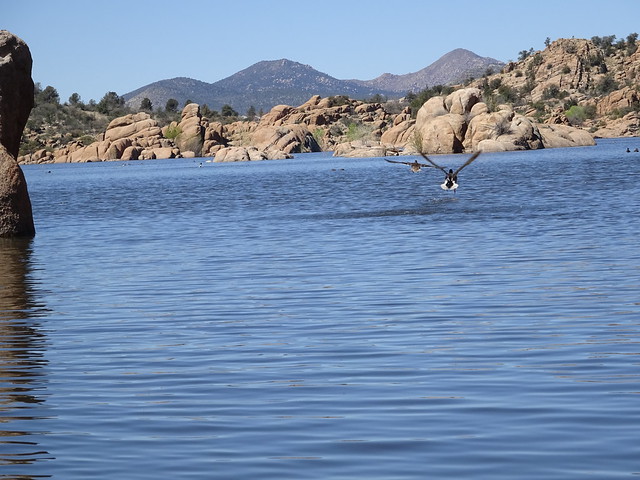 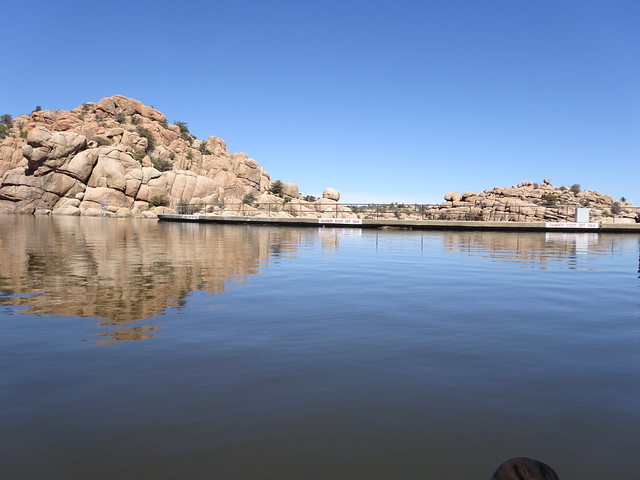 Another view of the Watson Lake Dam 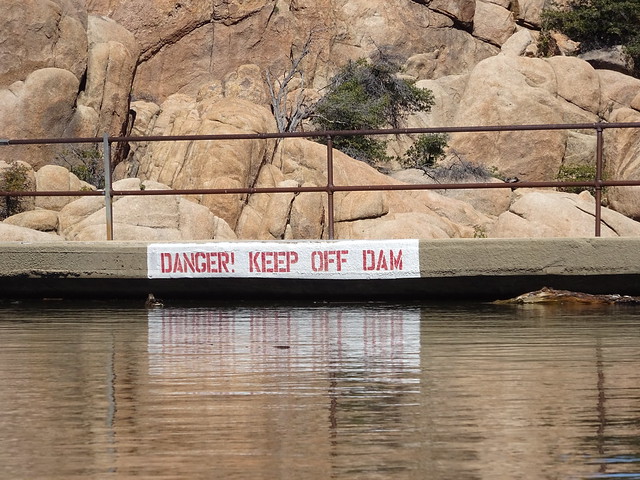 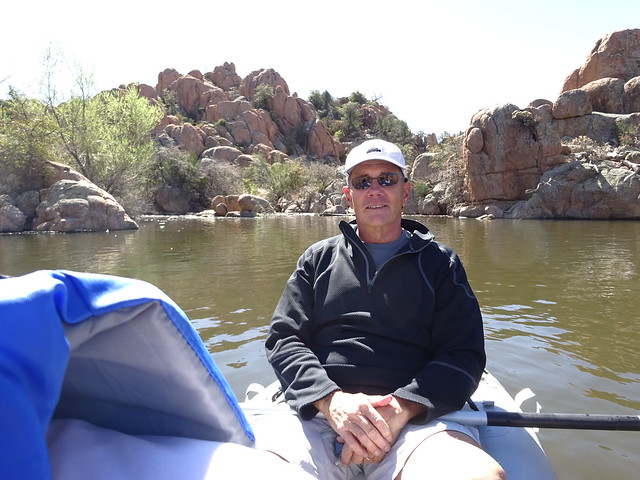 Watson Lake has entertained us nicely for the past two days.  But there is another lake in Granite Dells that is nearby.  So our next mission is to explore that area.