Earlier this week we took the popular Apache Trail Circle Route through the Superstition Mountains.  This 120 mile scenic route winds through deserts, mountains, by cliff dwellings, along lake shores, through old mining towns and beautifully eroded canyons.  The first half of the circle route is the scenic part, going up Apache Trail (once called the Mesa-Roosevelt Road) from Apache Junction to the Roosevelt Dam.  The road was originally built along an old Apache Indian trail.  It was used to haul supplies up to build a series of dams built to control flooding on the Salt River.  The first half of this part of the loop is on a paved two lane road that winds through the mountains.  The first site of interest to us is Canyon Lake, a reservoir formed in 1925, after the completion of Mormon Flat Dam. 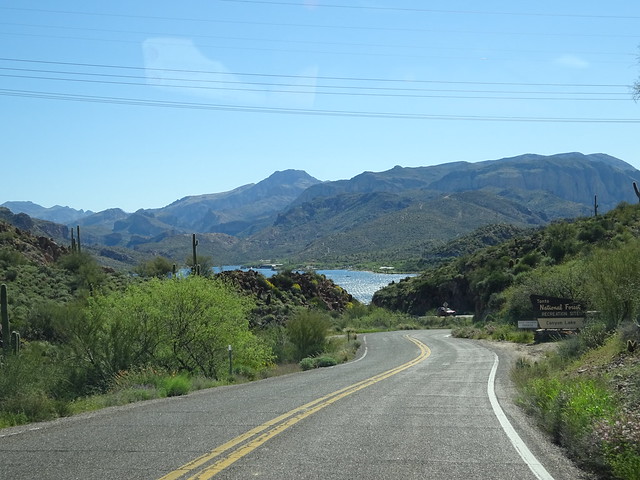 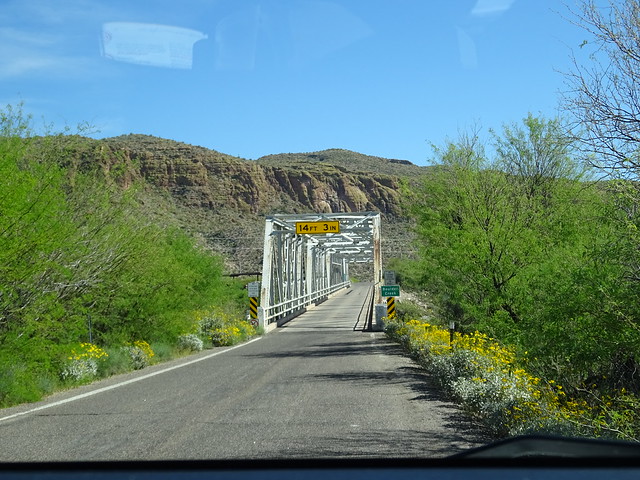 One of two one-lane bridges near Canyon Lake 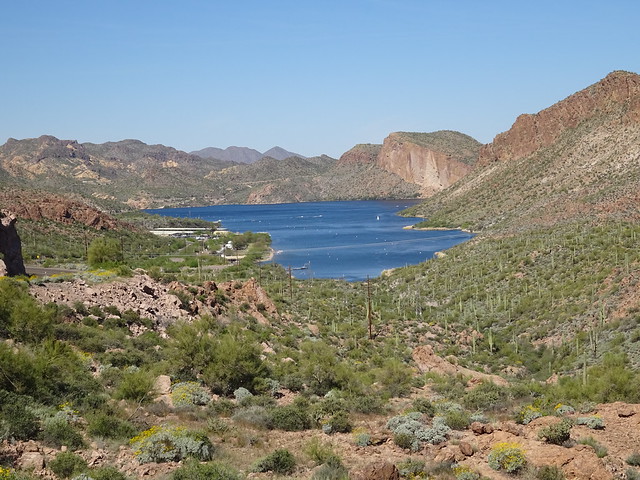 Looking back after passing Canyon Lake

Just two miles from Canyon Lake is the famous stage stop of Tortilla Flat.  This stage stop was constructed in 1904 as a staging area for the construction of the Mesa-Roosevelt Road from this point to the bottom of Fish Creek Hill, a few miles to the north.  Now it is a tourist stop with a unique saloon (saddles for bar stools) and a gift shop. 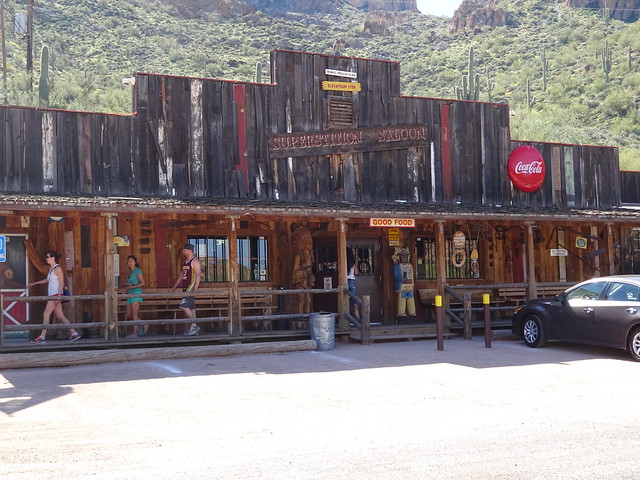 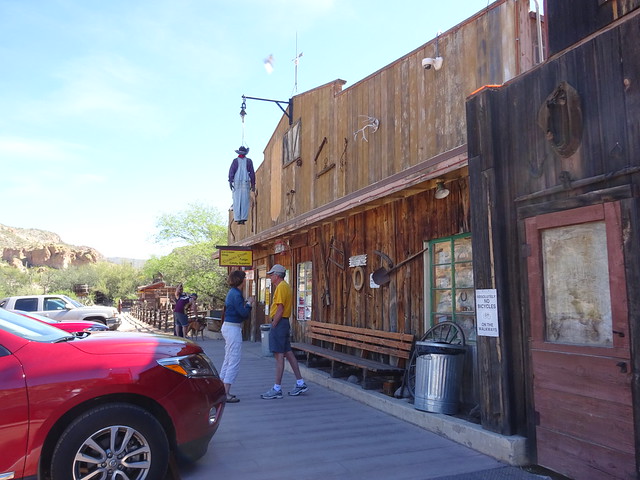 A few miles beyond Tortilla Flats the pavement ends and things begin to get interesting.  There is a great scenic view stop (with restrooms) just before you begin to descend down Fish Creek Hill that has a paved walk-way out to some nice viewpoints. 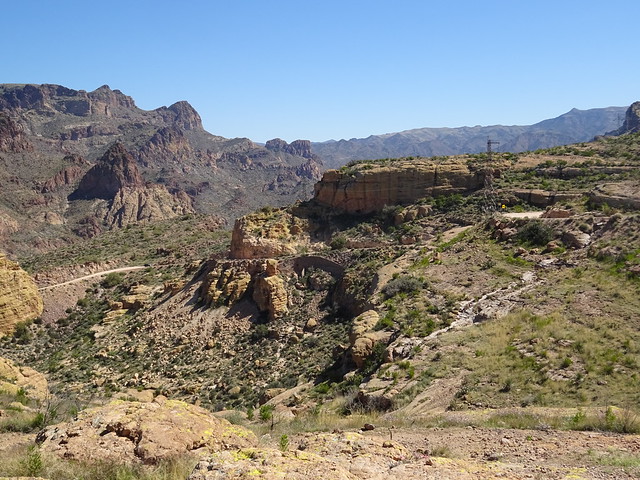 The view of the road going down Fish Creek Hill 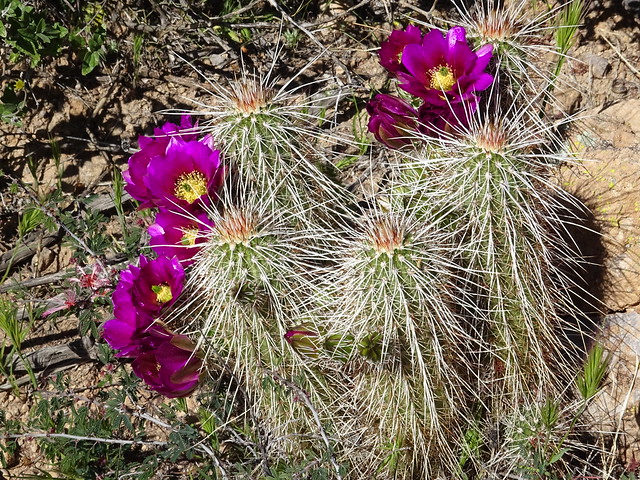 The road down Fish Creek Hill is not for the faint of heart as it is narrow, steep, and a bit rough. 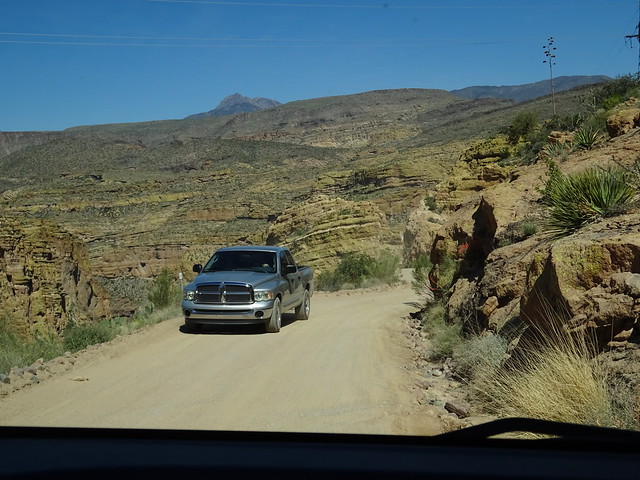 We pulled over to let this truck past 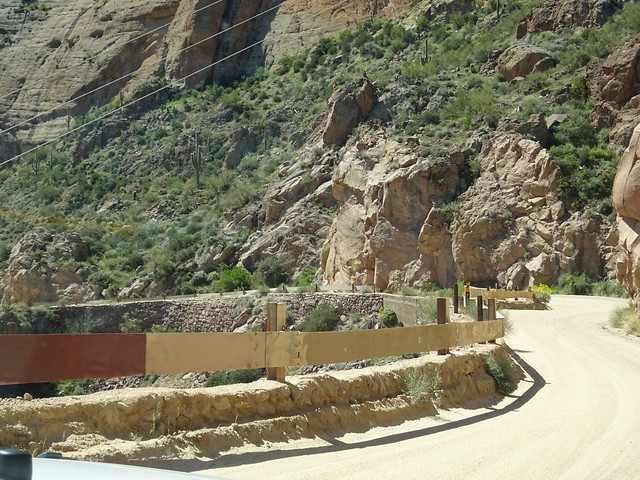 The barriers didn’t look too strong to us 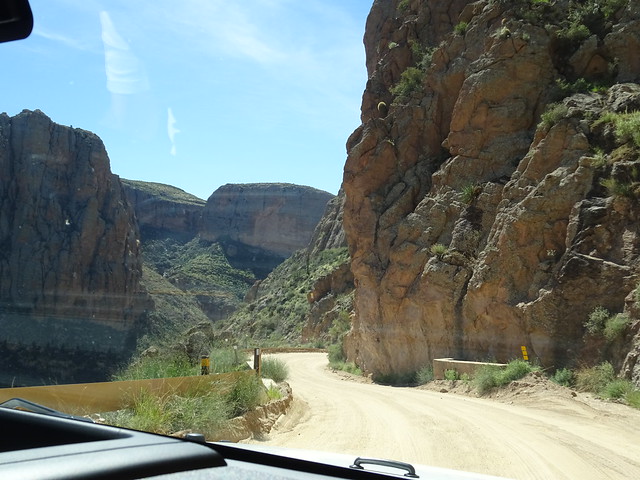 Glad the traffic was light as we went down the hill 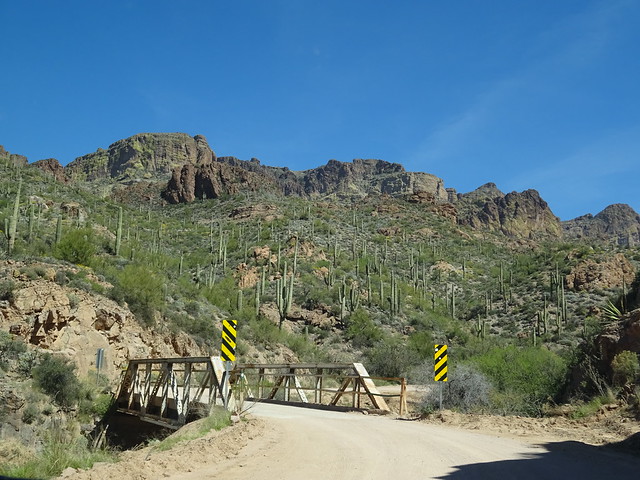 After a few more miles we came to Apache Lake.  We took the paved road down about a mile to the Apache Lake Marina were we took a few minutes to look at a series of photographs on display depicting the construction of the Roosevelt Dam. 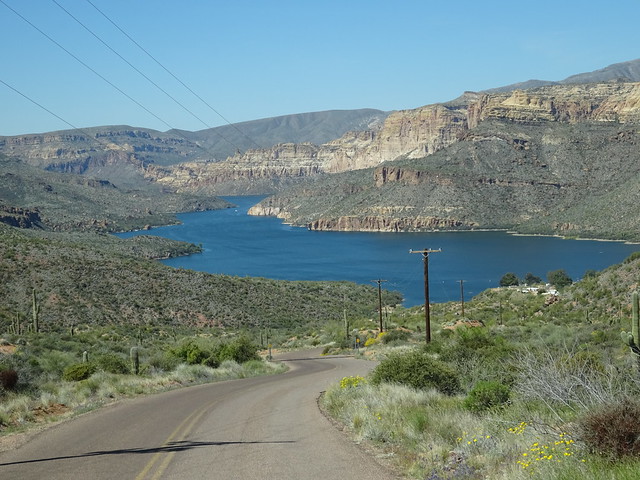 The road down to Apache Lake

After Apache Lake the road continues to bump and wind for another fourteen miles to Roosevelt Dam.  For a few miles we followed a fifth wheel RV toy hauler as it slowly made its way up the road.  The road is very rough through this section, so we wondered if the cabinets would still be up on the walls of this rig after the bumpy ride! 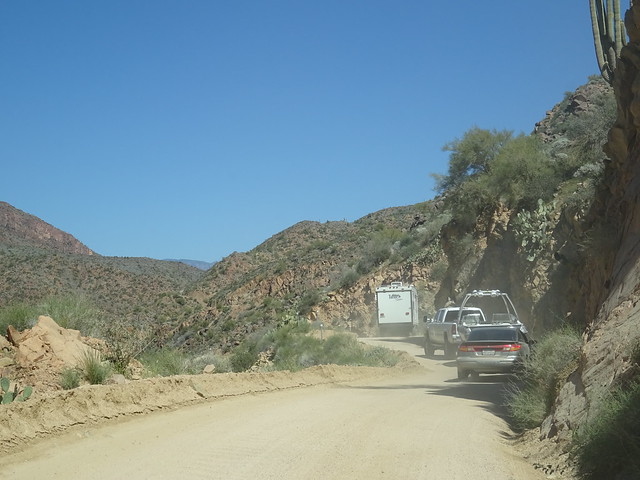 We also passed several people riding the road on bicycles!  It must be quite an exciting ride going up and down the steep hills through the dust on a washboard road of loose gravel. 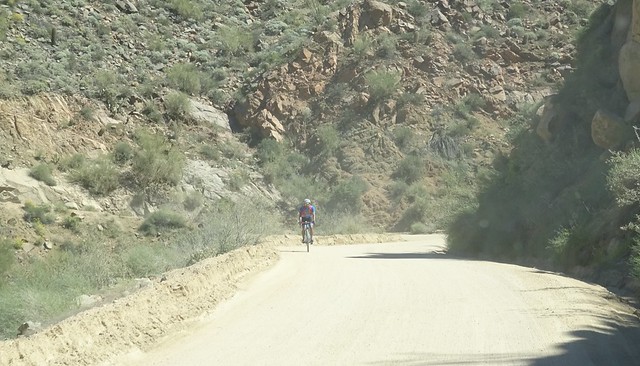 Finally, we rounded a bend and the Roosevelt Dam came into view right in front of us. 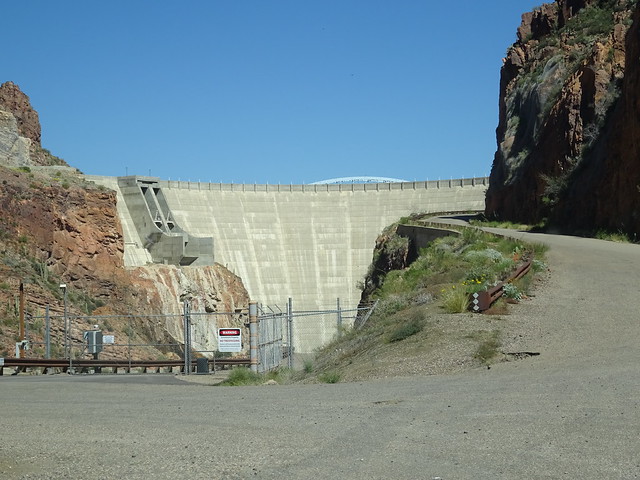 At one time this was the largest masonry constructed dam in the world.  Construction began in 1906 and the dam was dedicated by Theodore Roosevelt in 1911. The dam was refitted and reconstructed between 1993-1995 and was raised seventy-seven feet.  This new face-lift for Roosevelt Dam has completely changed its appearance.  Today the dam looks like a modern structure rather than the traditional masonry facade of the original structure. 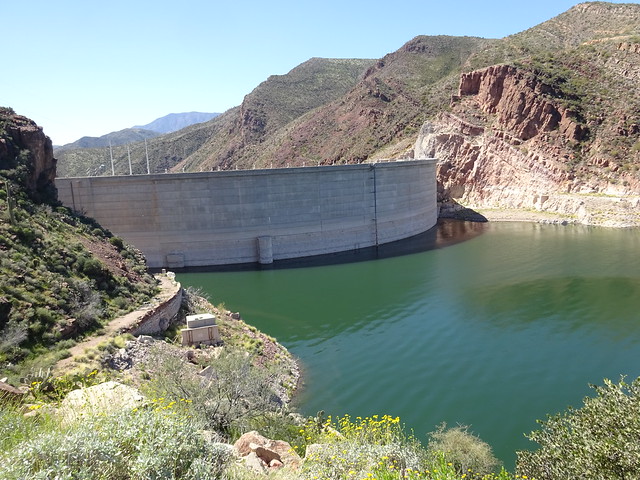 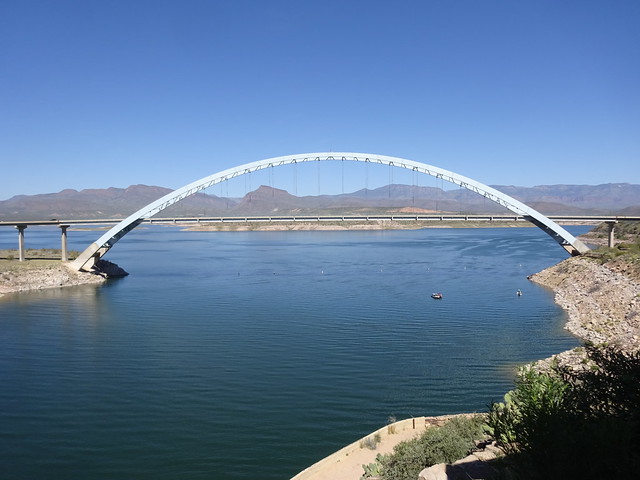 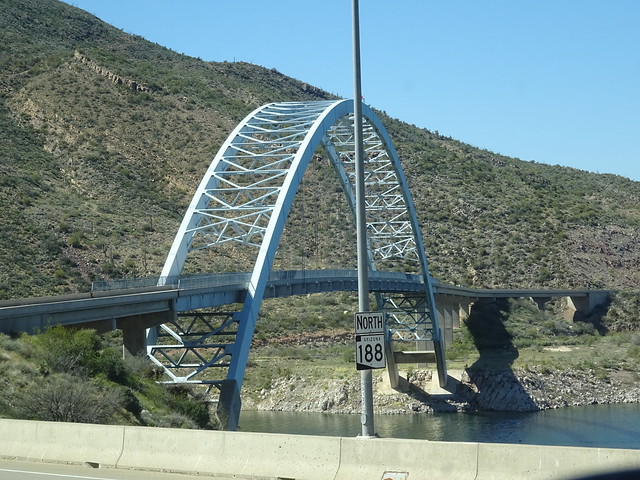 The Apache Trail Road ends near the dam when it meets SR 188.  At this junction we turned south on Rte. 188.  Just down the road a short distance is the turn-off to Tonto National Monument.  The national monument has an excellent interpretive center on the ancient Salado Indians and their culture and two well-preserved cliff dwellings occupied by the Salado culture during the 13th, 14th, and early 15th centuries. 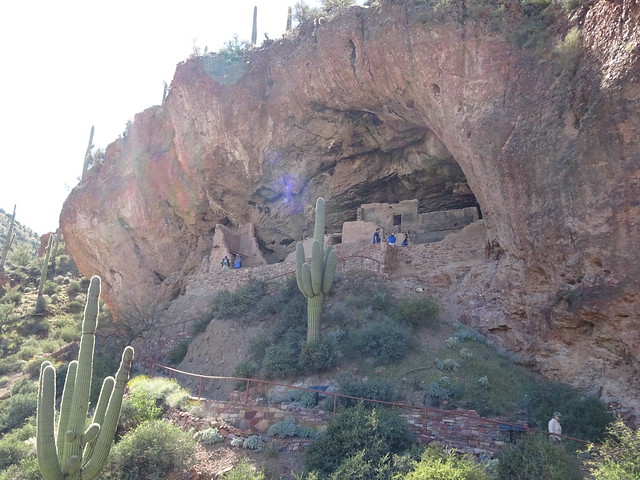 A view of one of the cliff dwellings

Of course, what trip through this part of Arizona would be complete without a look at one of those Crested Saguaro Cacti!  We had been told that there was one near the visitor center and, sure enough, there it was. 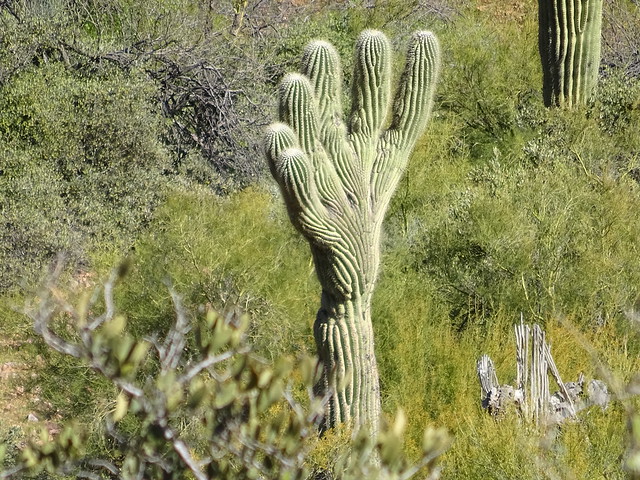 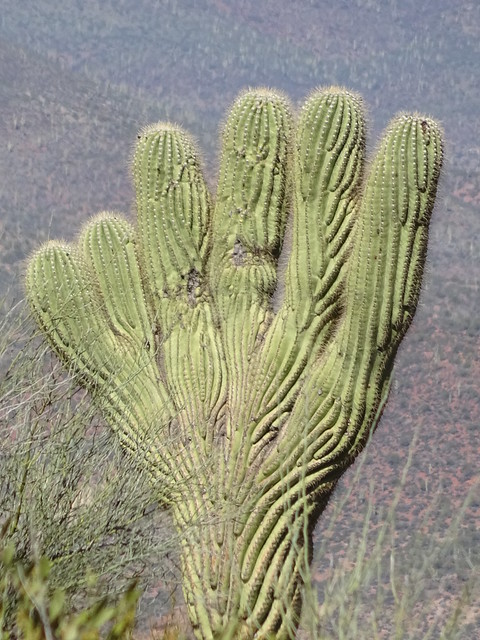 After a brief visit to the cliff dwellings we continued south on Rte. 188 for about 25 miles to the mining town of Globe, where we turned west on to Rte. 60.  West of Globe the road went through Miami, another mining town.  It then wound down a few thousand feet as we descended back into the valley heading toward the Phoenix area.

We highly recommend this drive as a great way to see some beautiful scenery and great views.  While a bit rough, the dirt section of the Apache Trail is doable in any type of vehicle.  If you do the loop in a clockwise direction, as we did, you will be on the inside lane when you go down the steep section of Fish Creek Hill, which makes it a bit easier.  But just take your time and enjoy the ride! 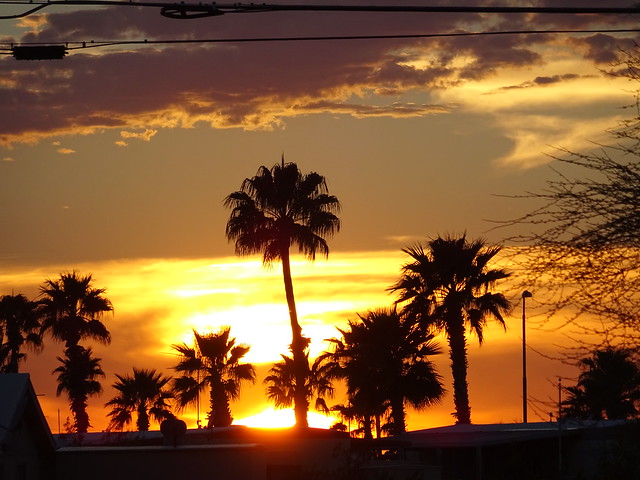 Leave a Reply to Joan and Steve Cancel reply