On Saturday we left the Bisbee, AZ area and drove about a hundred miles to the northeast to the little town of Willcox, AZ, right along I-10.  There are a number of RV parks here and they all looked about the same in reviews, so we chose Sagebrush RV Park because friends stayed there for their visit to the area.  This park is really an old trailer park where they removed some of the permanent units and made a large gravel area with full hook-ups for RVs. 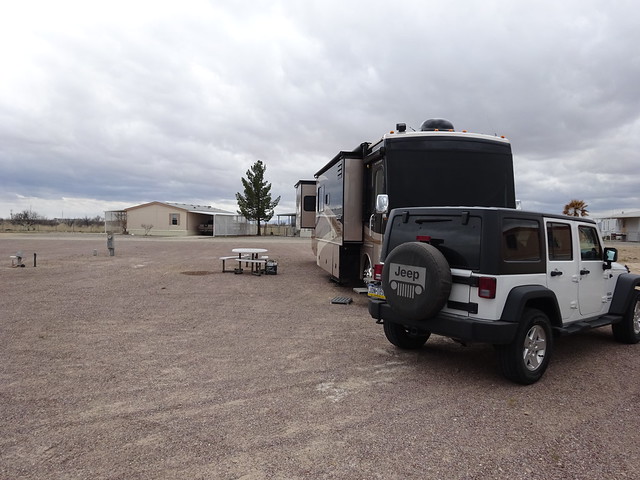 This park defines the description “no frills” but the sites are level and very long, the power is good, and the Wifi is dependable.  We had the RV area to ourselves during the day while a few overnight guests joined us at night, as this is a very convenient stop if you’re traveling through Arizona on I-10. 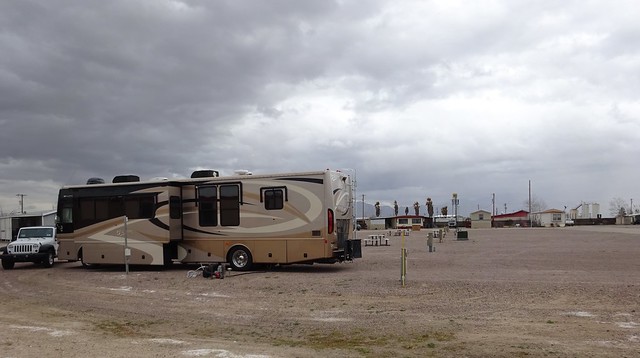 Sunday morning we were up bright and early (for us) and on our way to Chiricahua National Monument, about thirty-five miles to the south.  Our main reason to visit this area was to do The Big Loop Hike, a 9.5 mile loop that combines a number of trails in the heart of the Monument.  We read about the hiking in this area in two blogs (Lowes RV Adventures and Metamorphosis Road) and were anxious to check it out.  After a brief stop at the visitor center to talk to the ranger and pick up a map, we headed up Bonita Canyon Drive, a nice paved road leading up to the trailhead. 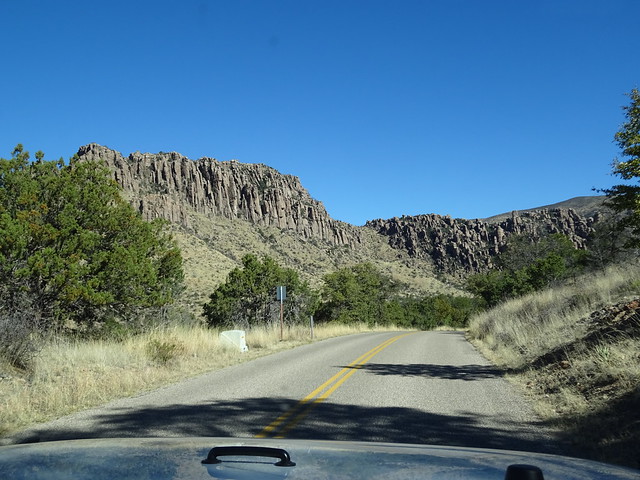 Not far from the visitor center we were fortunate to observe the little guy pictured below crossing the road in front of us. 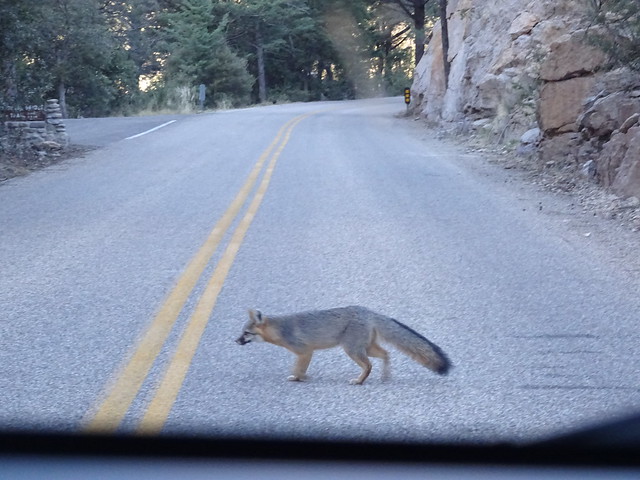 We’re not sure but we think he (she?) is a Red Fox.  If you know for sure what he is, let us know with a comment.

About six miles up Bonita Canyon Drive, we pulled in to the Echo Canyon parking lot.  This is one of two places where you can pick up a section the Big Loop called the Ed Riggs Trail. 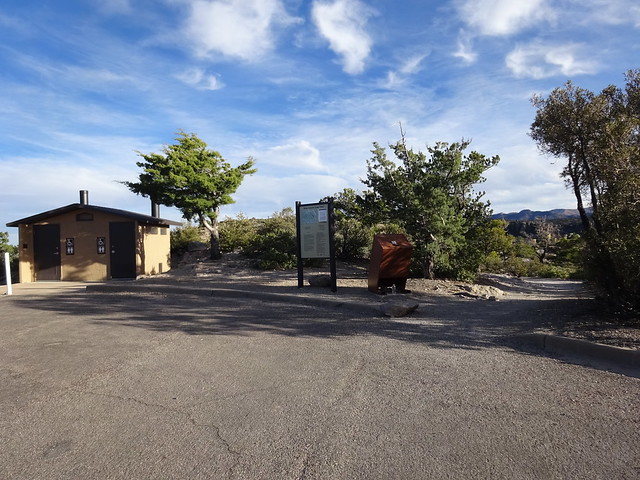 The trailhead by the Echo Canyon parking area 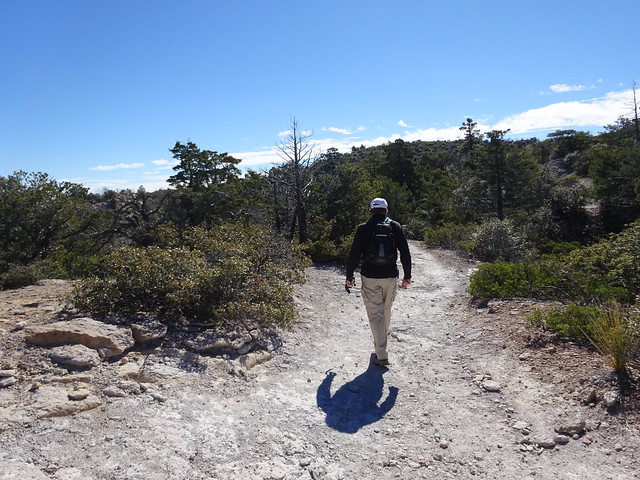 Heading out on the Ed Riggs Trail

Not far down the trail we were already hiking next to many cool pinnacles and balanced rocks. 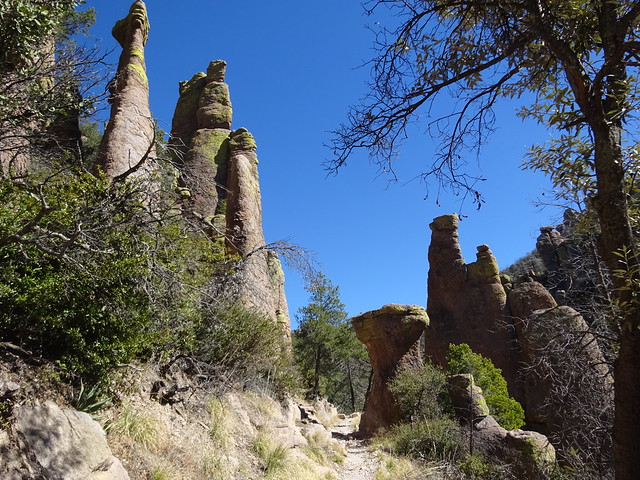 The many hiking trails in Chiricahua National Monument are very well-marked.  The trails here are among the many trails around the country built by the Civilian Conservation Corp (CCC) during the Great Depression.  We were very impressed with the trails and the numerous steps and retaining walls built by the CCC. 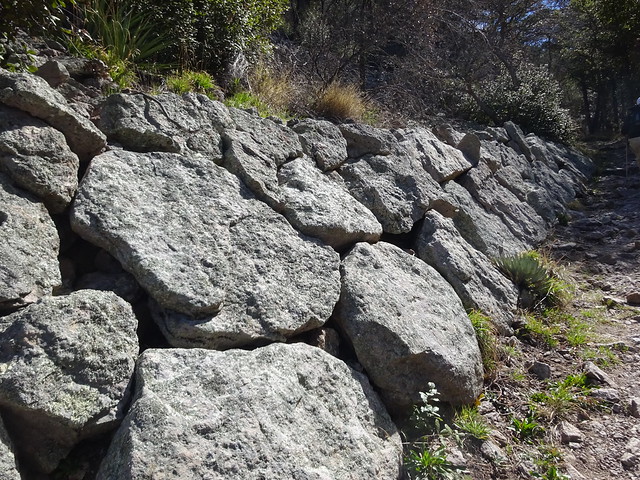 Less than a mile on the Ed Riggs Trail we came to a junction where we turned on to the Mushroom Rock Trail. 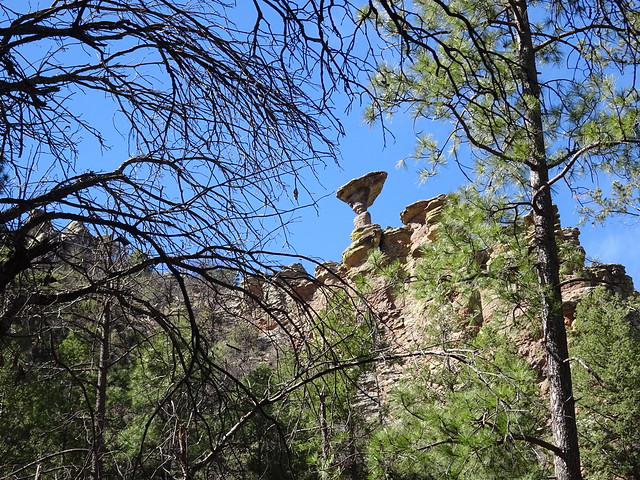 As we hiked the Mushroom Rock Trail we could see evidence of the Horseshoe Fire that went through the park in 2011. 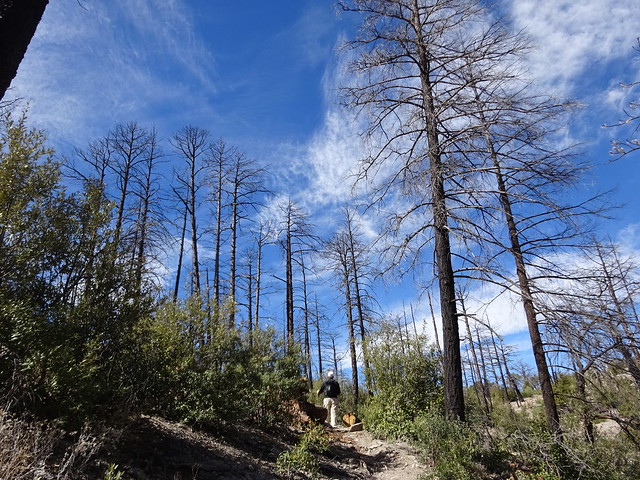 After hiking a little over a mile, we came to another junction where we left the loop and turned on to a half mile trail leading out to Inspiration Point.  Along this trail we could see the rock formation known as “Head of Cochise” to our north. 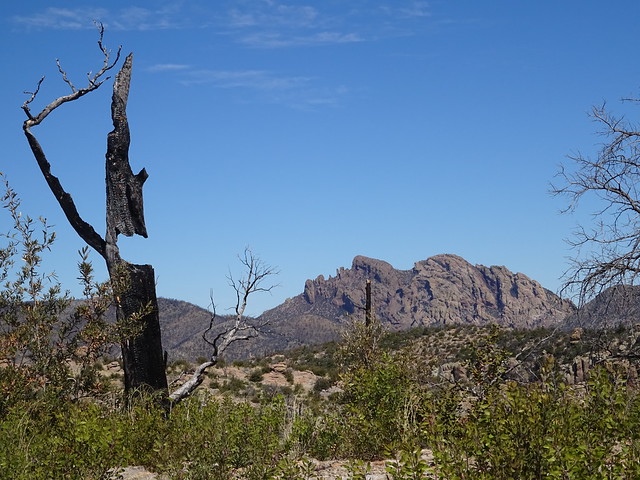 The views from Inspiration Point made the extra mile hike worth the effort. 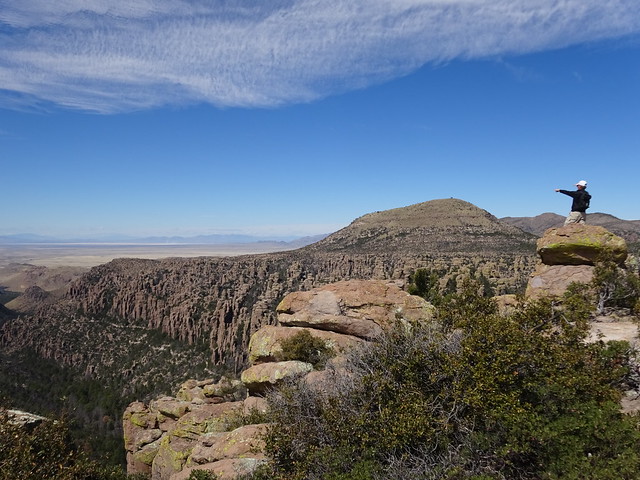 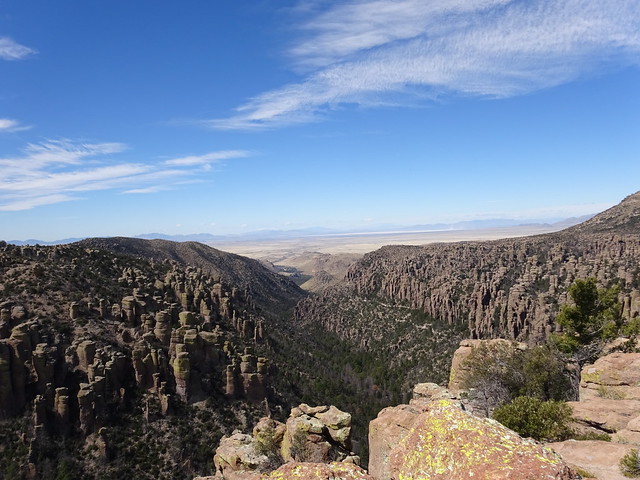 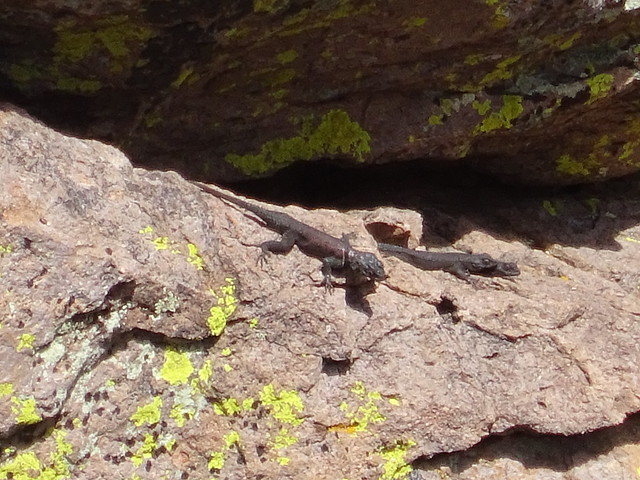 After returning back from Inspiration Point, we re-joined the loop on a segment known as the Big Balanced Rock Trail.  We soon came to a rock that we thought was the inspiration for the trail’s name. 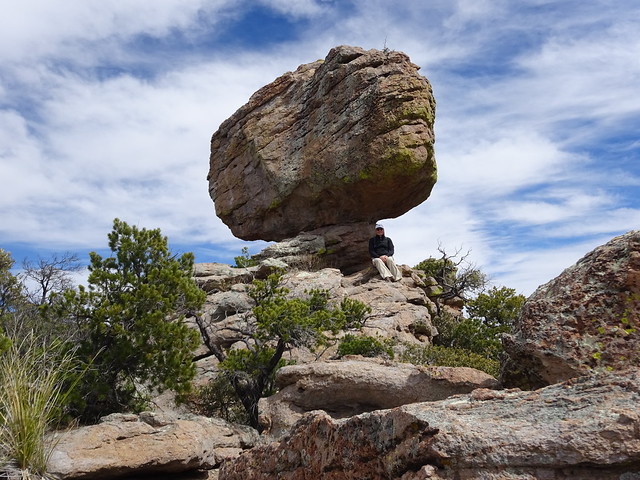 We continued along the trail as it meandered through beautiful rock formations. 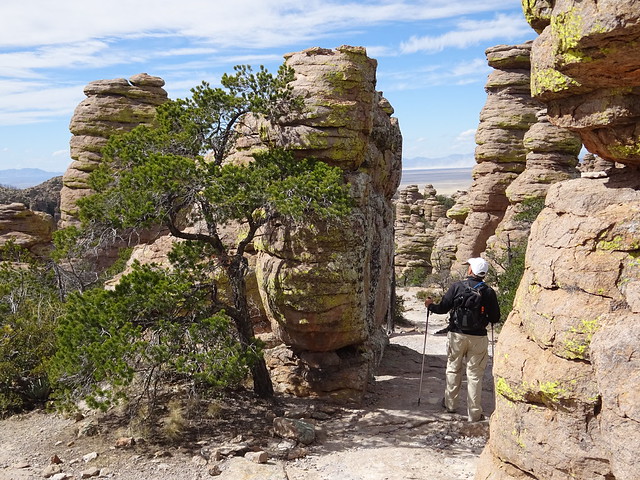 As we rounded a bend the real inspiration for the trail’s name came into view. 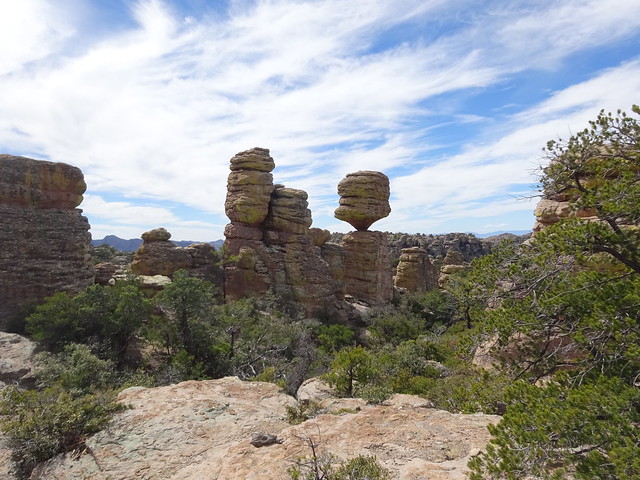 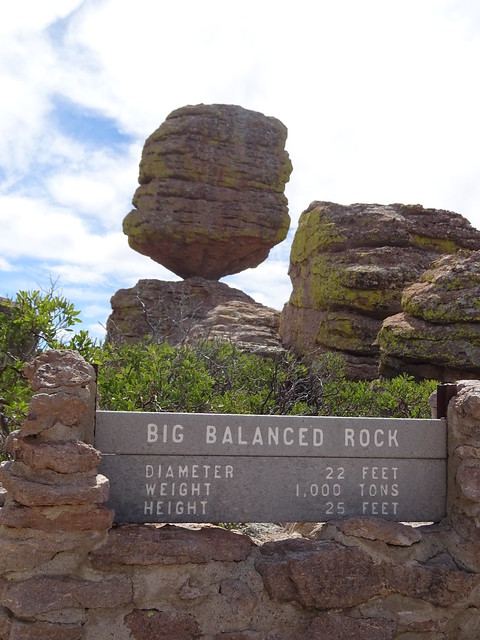 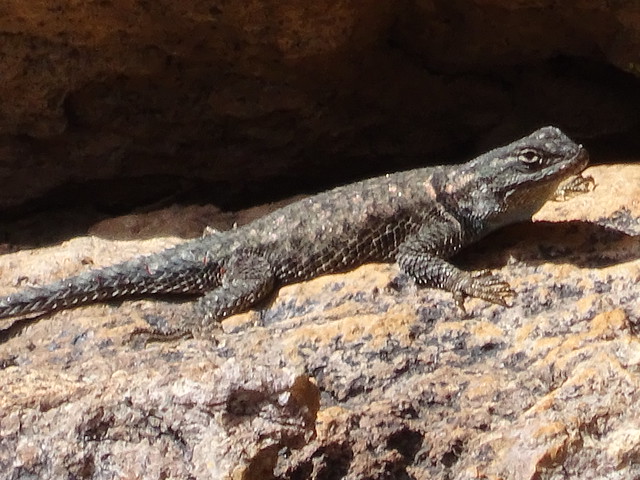 At the next trail juncture we turned to our right on to the Heart of Rocks Loop Trail.  This is a very cool trail worthy of its own blog so we’ll save pictures from it for our next post. 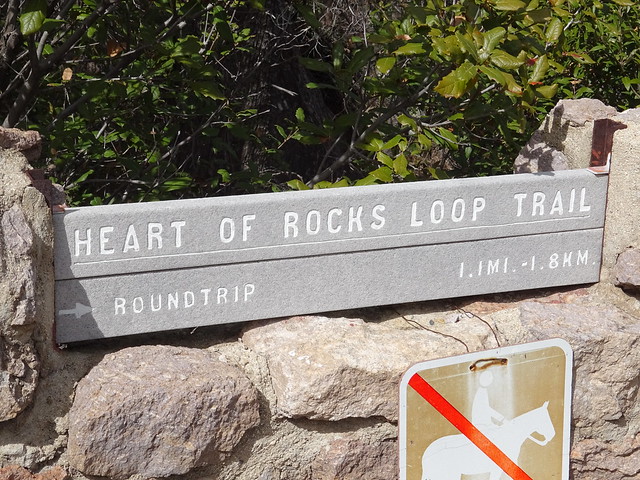 After the Heart of Rocks Loop, we returned to the main trail and continued on what is called the Sarah Deming Trail.  This trail is a bit over a mile and a half in length and descends down the Sarah Deming Canyon to the next trail junction. 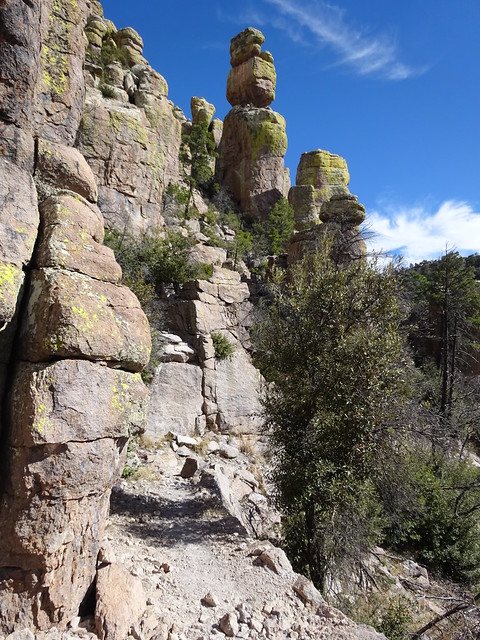 After going down what seemed to be a long mile and a half, we came to the next trail junction.  At this point we turned to the right and continued up the Upper Rhyolite Trail for a bit over a mile, then on to the Echo Canyon Trail for 1.6 miles to the parking area. 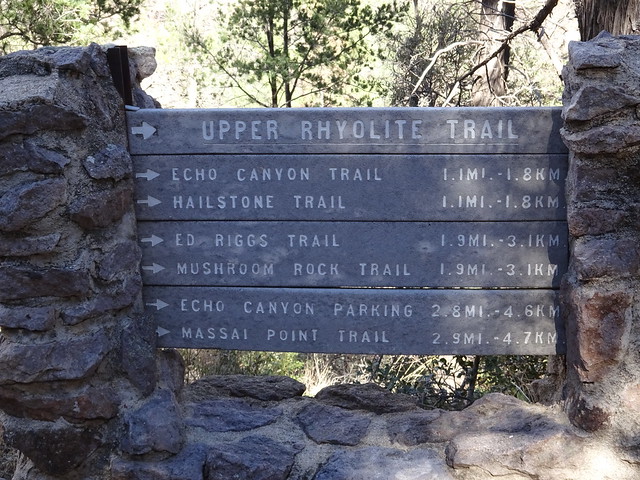 At the visitor center we were told this portion of the trail, while going uphill, was not as difficult as the Mushroom Rock Trail.  We respectfully disagree!  We found the Upper Rhyolite Trail to be the most difficult part of the entire hike.  Not only was it up hill, the trail was very rough all the way. 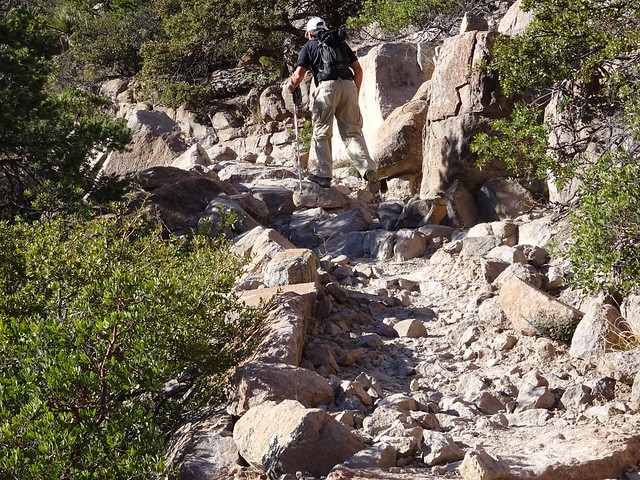 Going up the Rhyolite Trail

Once we joined the Echo Canyon Trail for the final mile and a half the trail continued to gain elevation but became very interesting as we wound through the rock spires. 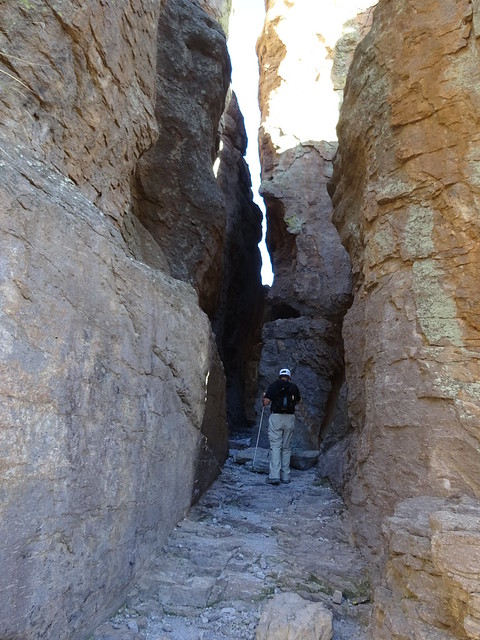 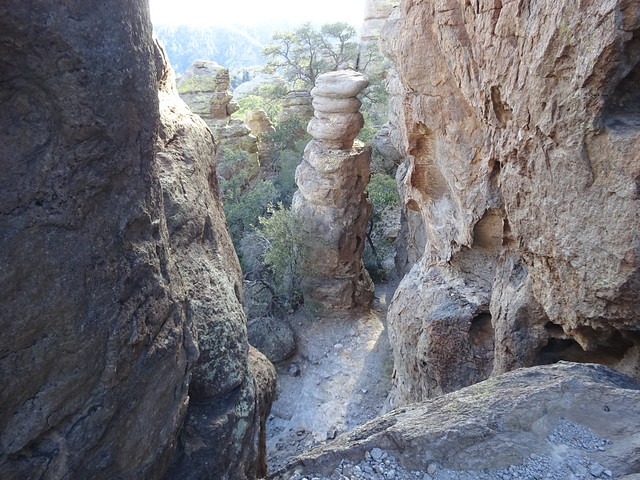 Looking down at the trail below 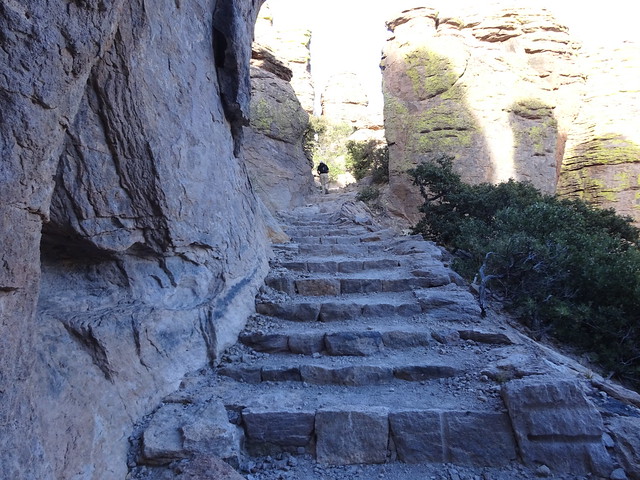 Still going up! Thanks CCC for the steps.

The final “scenic spot” on the trail was an area known as “The Grottoes.” 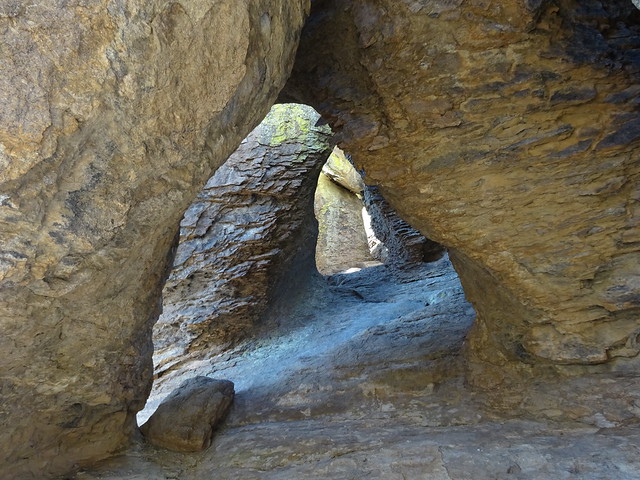 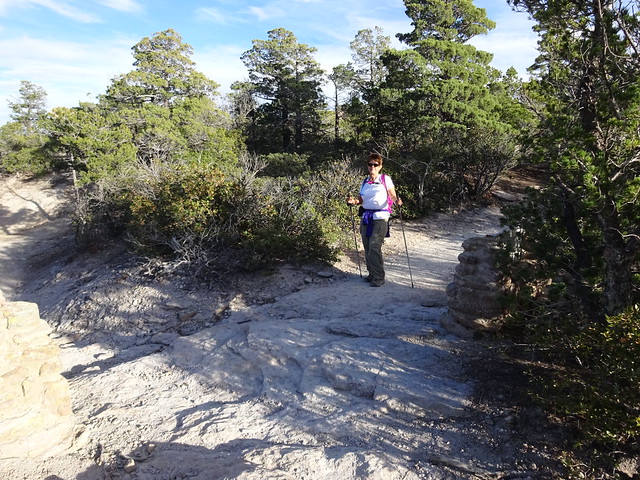 The end of the trail at last!

We finally returned to the Jeep after almost ten miles on the trail.  We both feel that this has been one of the best hikes we have ever done.  While a bit long and strenuous, we were constantly surrounded by great rock formations and scenic vistas.   The trails are clearly marked and very nicely maintained.