The day after hiking to Coronado Peak we returned to Coronado National Memorial for a visit to the Coronado Cave.  The cave has been called by several names, including Montezuma’s Treasure Vault and Geronimo’s Cave.  Legends claim that it was used by the Apaches as a hide-out when being pursued by the U.S. Army and in the late 1800’s it was not uncommon to find arrowheads in the cave. 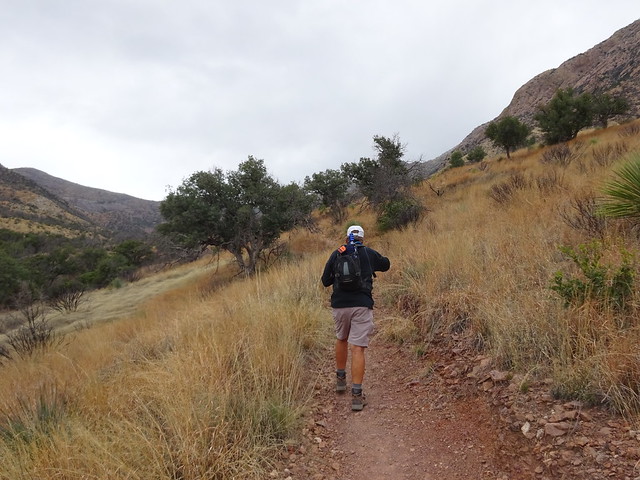 A half mile trail leads up to the cave entrance

The Coronado Cave is one of the few caves in areas maintained by the National Park Service that you can explore without a guide.  A park ranger does leads a hike into the cave on Saturday mornings but, since we will not be in the area on Saturday, we decided to explore it on our own. 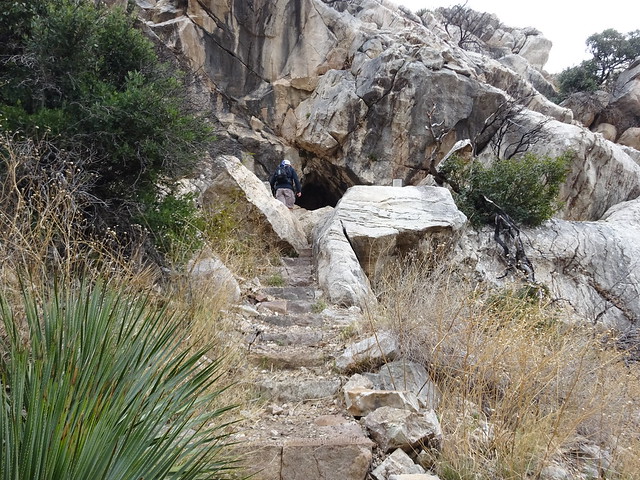 The final climb to the entrance

We arrived at the entrance just as two young guys were climbing out.  They said that none of the small side caves inside lead anywhere.  They had spent considerable time and effort crawling in to each one, and the dust and dirt covering each of them attested to their efforts.  One of them asked if there was water available at the visitor center.  Apparently they were in need of water, but they did have some liquid refreshment in their packs.  As we  were about to descend into the cave, one of them pulled out a bottle of beer, removed the cap, and began enjoying it as he and his buddy rested before heading back down the trail.  When we got into the main part of the cave, we could also smell the evidence that they were smoking (cigarettes!) in the cave, a no-no on the park rules.  Ah, the stupidity of youth! 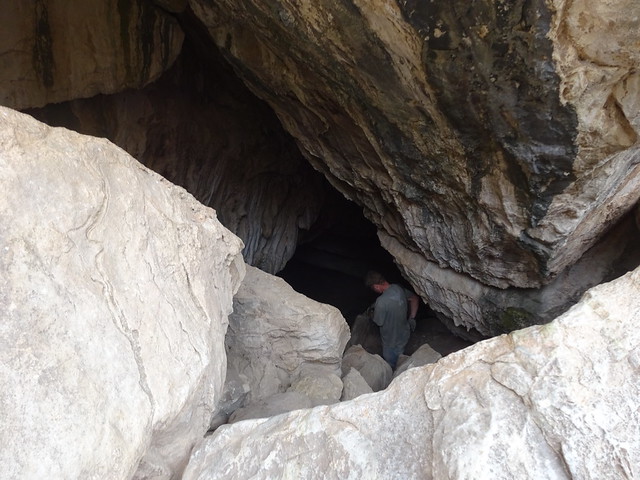 One of the young hikers climbing out of the cave

The entrance to the cave requires scrambling about twenty-five feet down a rocky slope to the cave floor.  The cave interior extends 600 feet in length, with 20 foot high ceilings. 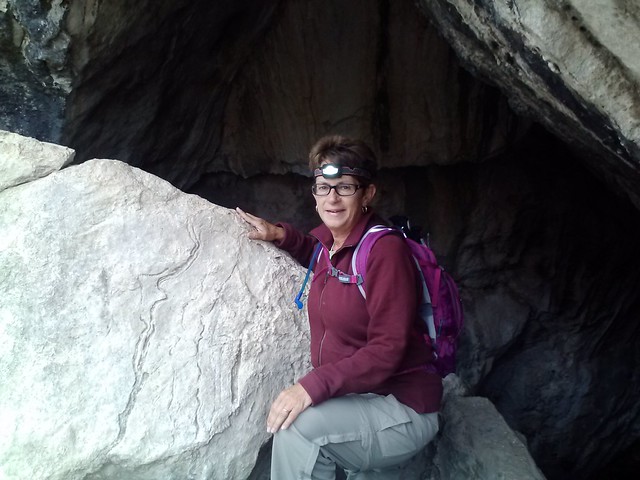 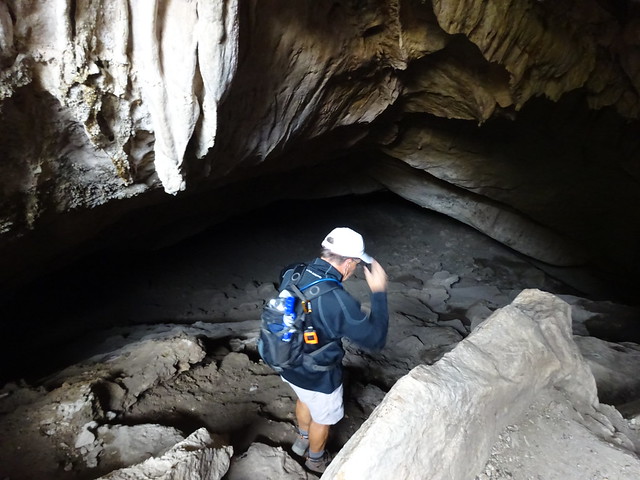 Climbing down into the cave 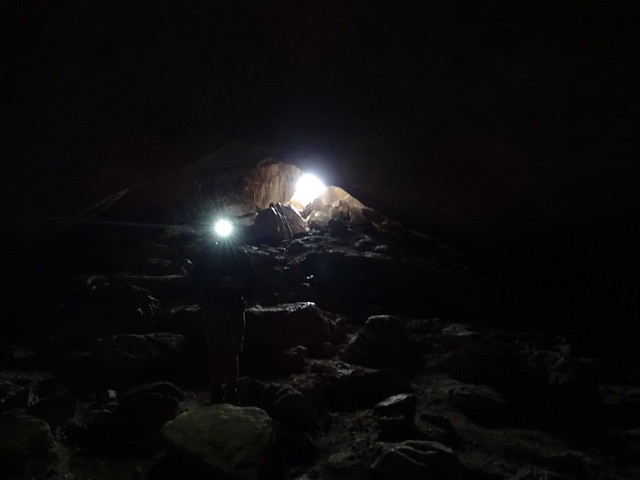 Looking back up toward the entrance 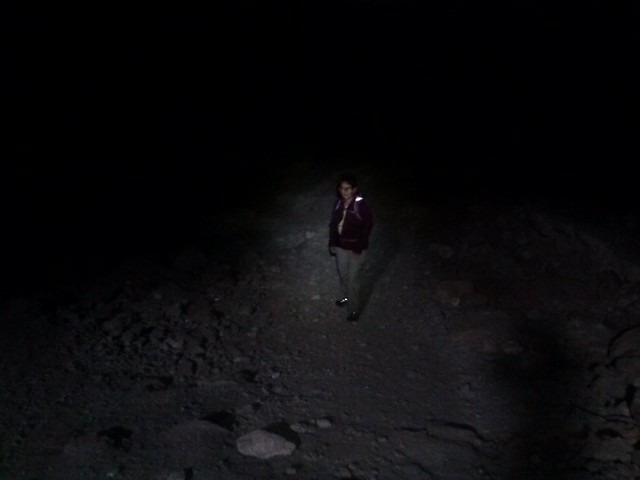 The cave has several interesting formations.  The most prominent is the sentinel, a huge symmetric stalagmite standing in the center of the last chamber. 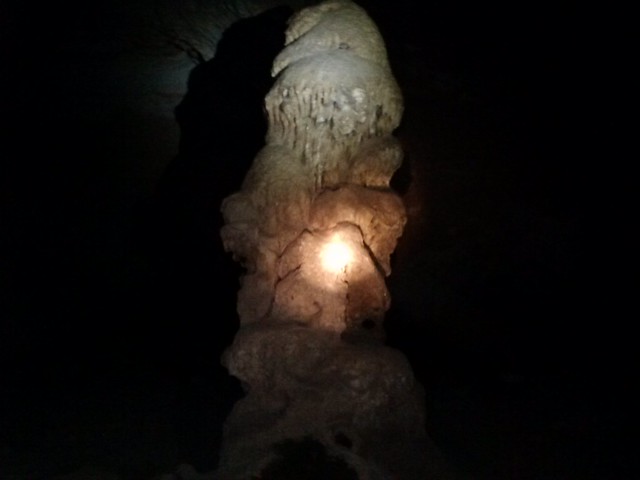 The cave includes numerous formations including stalagmites, stalactites, columns and scallops.  Although today it is dry, geologist examining the scallops along the walls estimate that at one time as much as 50,000 gallons of water per minute flowed through the cave from east to west! 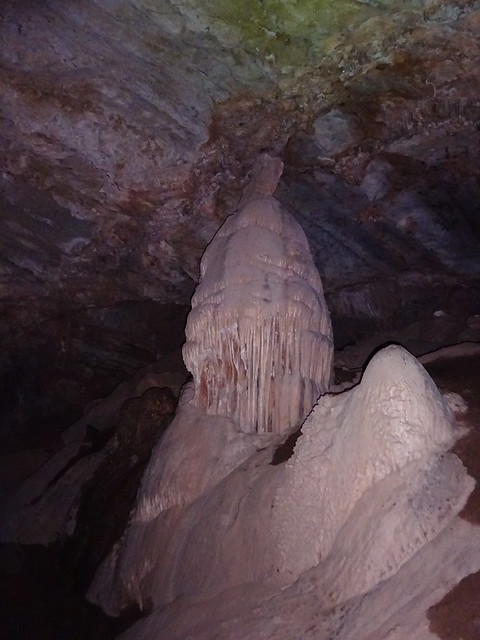 We picked a great day to visit Coronado Cave.  Outside the weather was cold, windy, and rainy.  But inside it was dry, calm, and 68 degrees!

We are now approaching the end of our two week stay in the Bisbee area.  Turquoise Golf and RV Park  in the little town of Naco is a great place to stay, even if you don’t golf.  While it is right on the Mexican border, the place is swarming with Border Patrol vehicles and we always felt safe.  And nearby Bisbee is a town that is very interesting.  While a nearby grocery store has a small Starbucks stand, we really enjoyed visits to the Bisbee Coffee Company.  It’s located right in the center of Old Bisbee and is a great place to sit and watch the odd mixture of people walking by the coffee shop window. 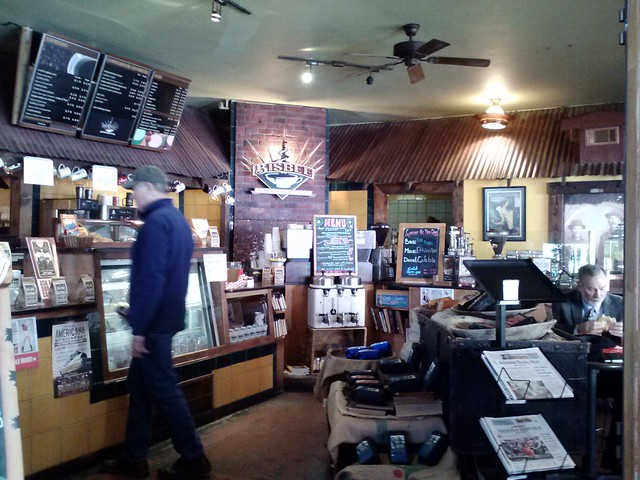 Be sure to put Bisbee on your list of “must visit” locations!