Visit to Bisbee Mine and History Museum

While we are staying in Naco, a tiny community right on the Mexican border, the main attraction of this area is the nearby town of Bisbee.  Bisbee was founded as a copper, gold, and silver mining town in 1880, and named in honor of Judge DeWitt Bisbee, one of the financial backers of the adjacent Copper Queen Mine, a very productive tunnel mine.  In 1917 open pit mining began nearby due to the high demand for copper in WWI.  Mining continued in Bisbee until 1974. 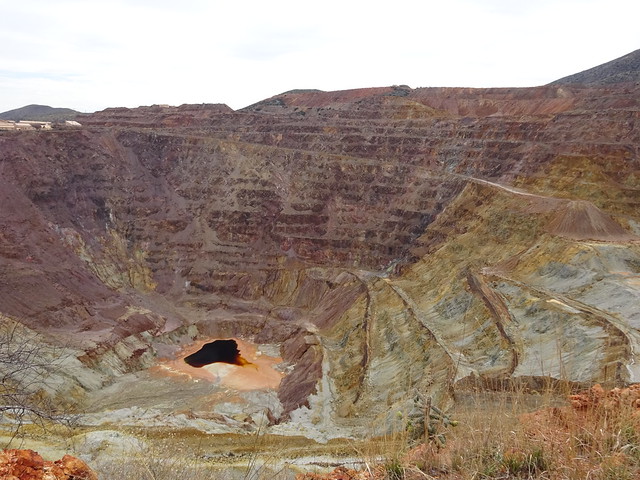 Above is a picture of the Lavender Pit Mine.  It is #1 on the picture below taken of a display board at a viewing area next to the mine.  The mine was dug in three phases over sixty years: (1) The Sacramento Pit, (2) The Lavender Pit, and (3) The Holbrook Extention, 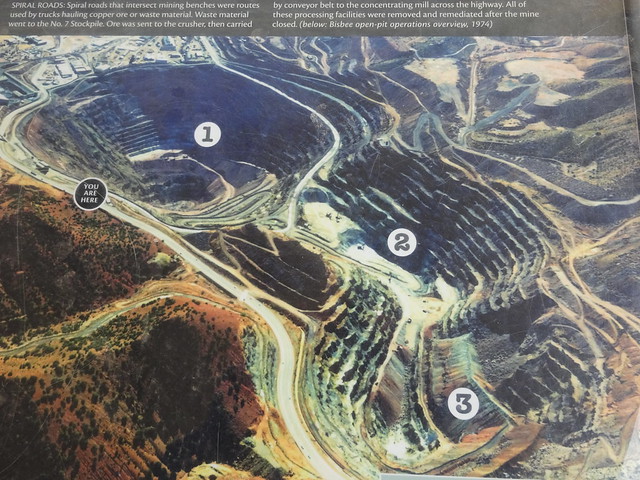 As the mines declined Bisbee became a destination in the 1960s for artists and hippies.  Today much of the town has been restored and the population is a combination of quirky artists and retirees supported by a thriving tourism business.  One of the most visited places in the town is the Bisbee Mining and History Museum, located in the old headquarters of the mining company right in the center of town. 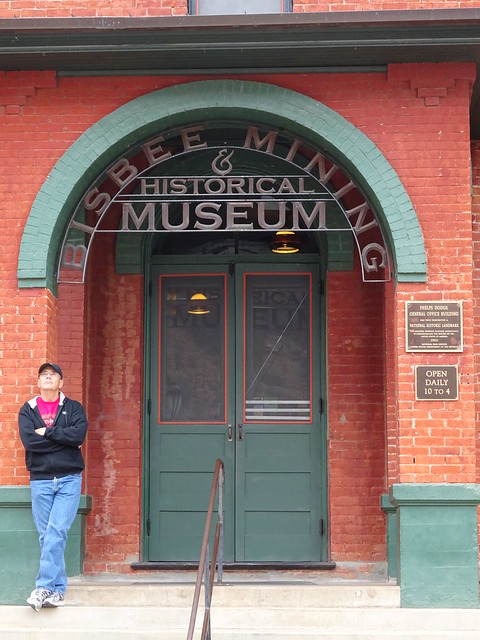 The first floor is dedicated to highlighting the history of the town. 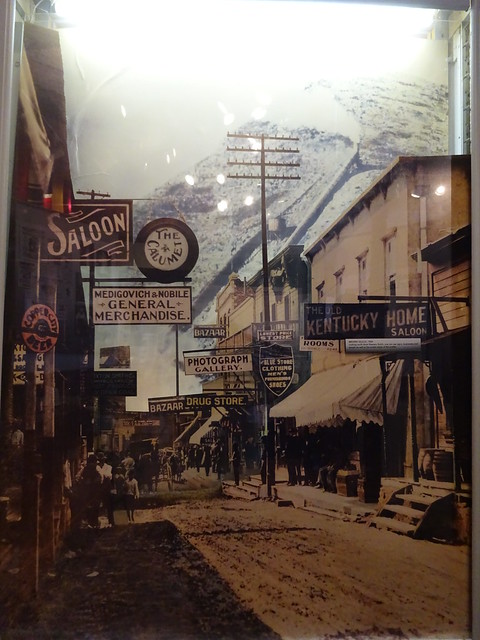 The main street around 1900

Below is a picture of George Warren who worked as a prospector in the region during the late 19th century.  He is credited with having located a body of copper ore, which later became the Copper Queen Mine.  George had some personal problems (mostly related to alcohol) and never profited from his discovery.  In 1880 a pioneer photographer visiting Bisbee took a photo of Warren posing as a miner. This image was used as a model for the miner posing with long-handled spade in the Seal of Arizona. 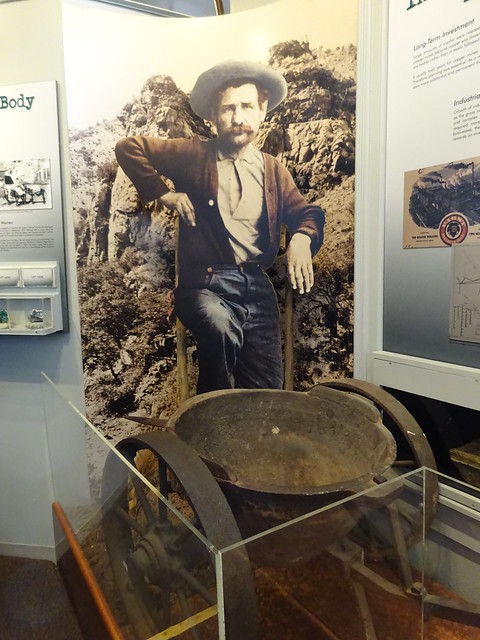 In the photo below a high ranking mine official looks over the Brass Board.  When a miner went into the mine he would be given a brass token with his name on it.  The token was used to make sure all miners had exited at the end of a shift, as well as, identify a body in case of a mine accident.  The mines of Bisbee had very good safety records, so the tokens were rarely needed. 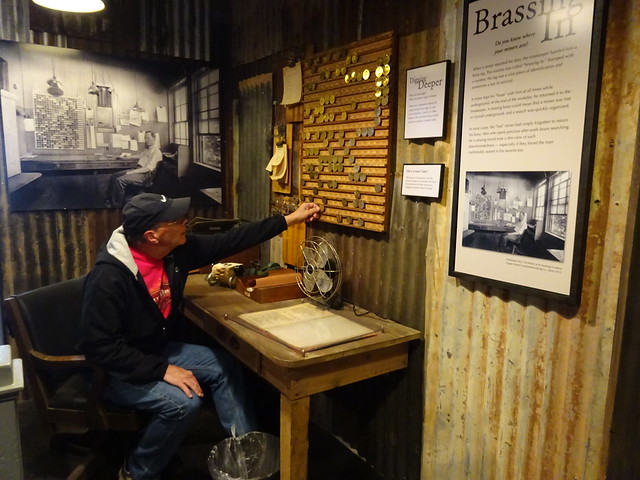 A high quality turquoise promoted as Bisbee Blue was a by-product of the copper mining. Many high-quality mineral specimens have come from Bisbee area mines. 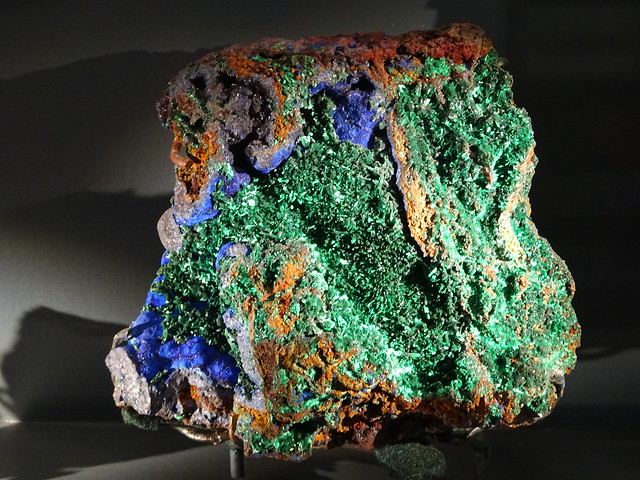 Azurite and Malachite on Goethite 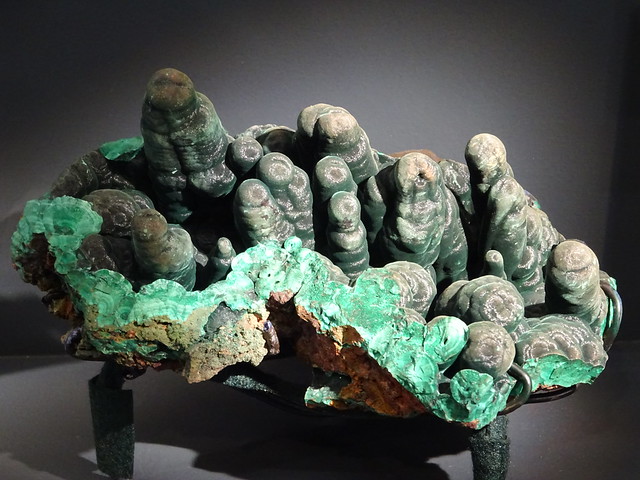 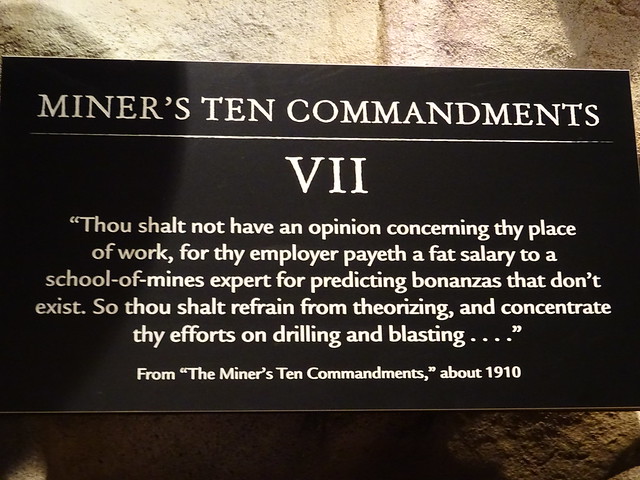 Many early mines had their own Ten Commandments. Bisbee was no exception 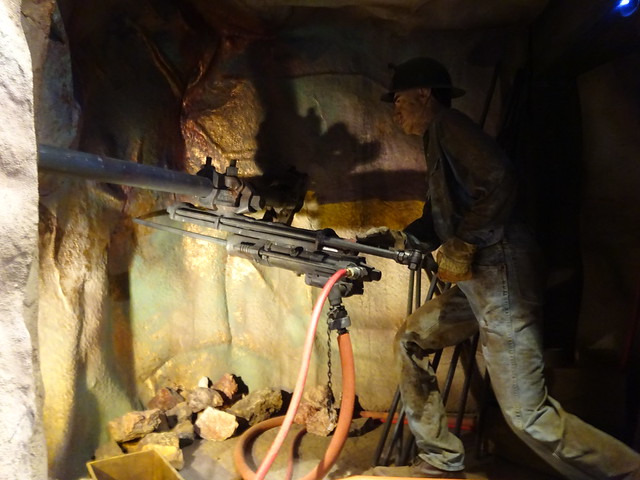 Diorama of a miner at work 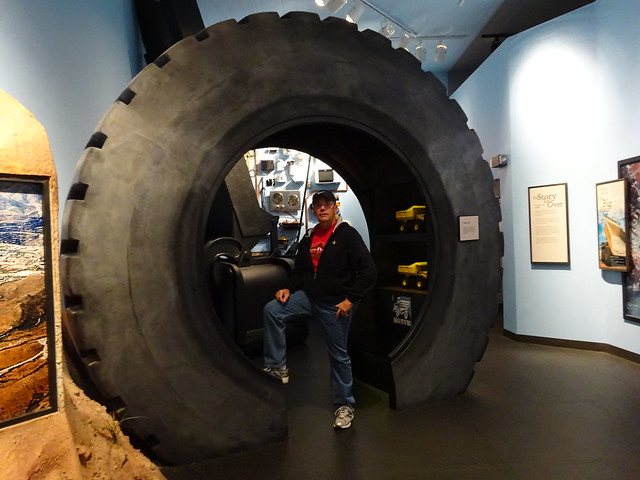 After touring the museum we took a walk up into one of the hillside neighborhoods.  Below are pictures of some of the interesting sites. 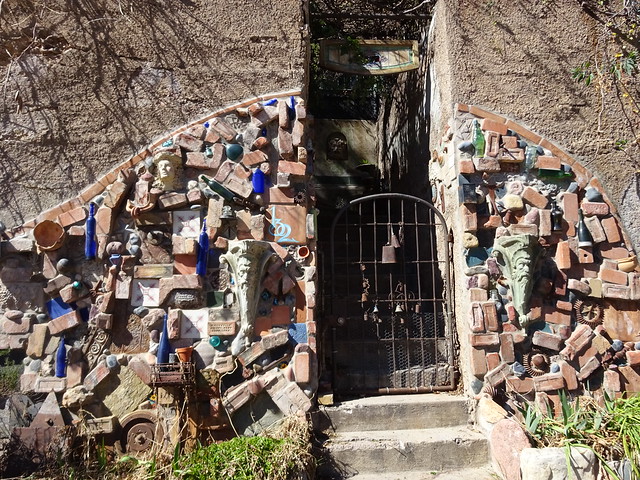 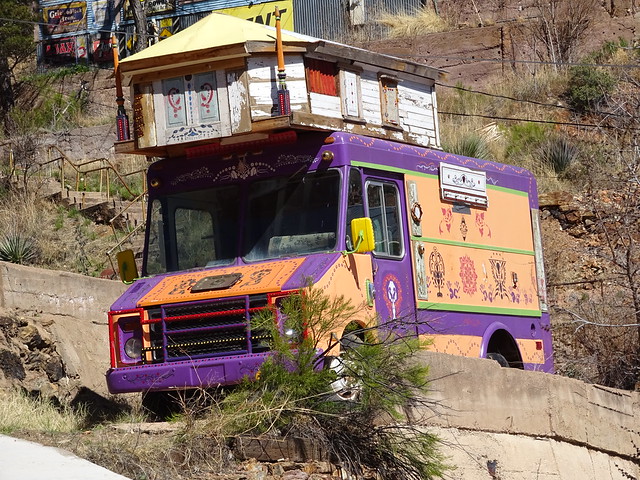 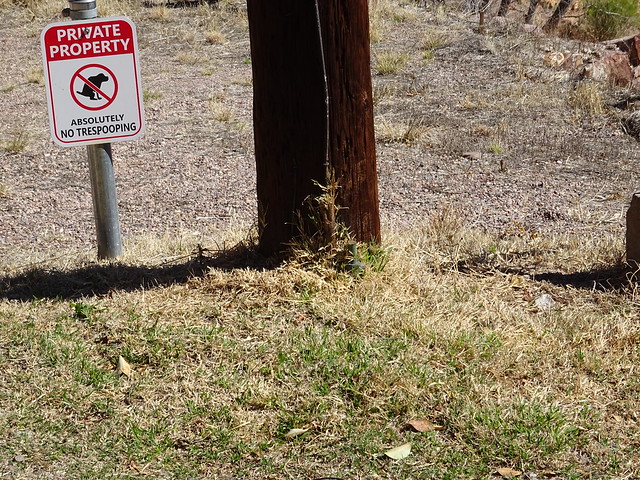 Below is the main entrance of the old Bisbee High School.  The school was a state-of-the art when it opened in 1914 in the center of town.  It was in operation until overcrowding made the building of a new school necessary in the mid-1950s. 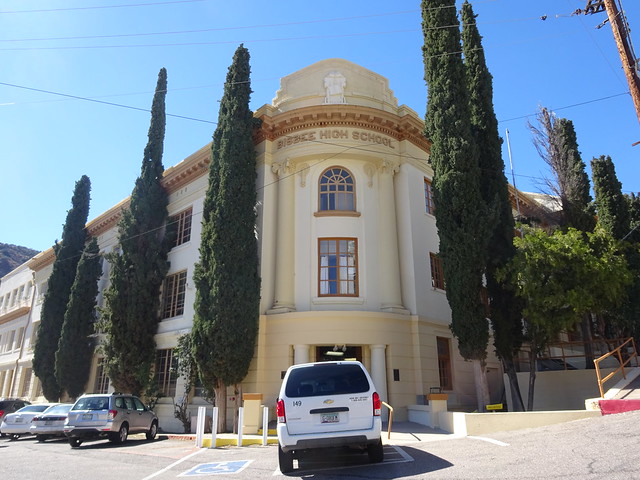 It is the only four story building in the country with a ground level entry on each floor. The entry shown is on the 2nd floor and was the main entry to the school. The first floor is under this and held the shop classes and the bus garage. The 2nd floor held the offices and general class rooms. The 3rd floor also was general classrooms while the 4th floor was the gym/auditorium.  In the picture shown above, if you walk up the hill to the right you pass a  ground level entry half way up for the 3rd floor.  Walk a bit further up the hill and you come to the ground level entry for the Gym (pictured below). 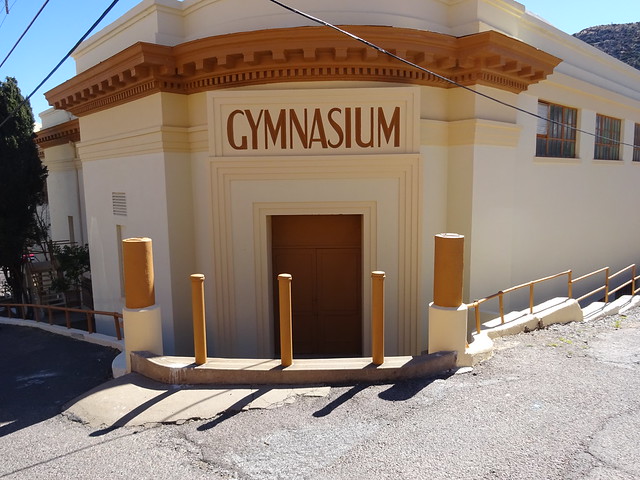 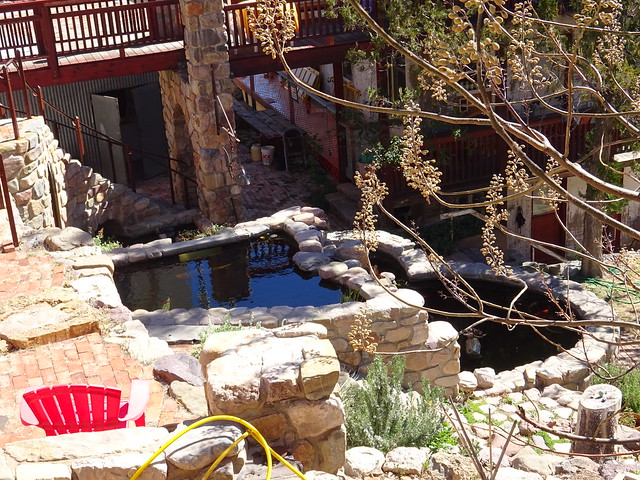 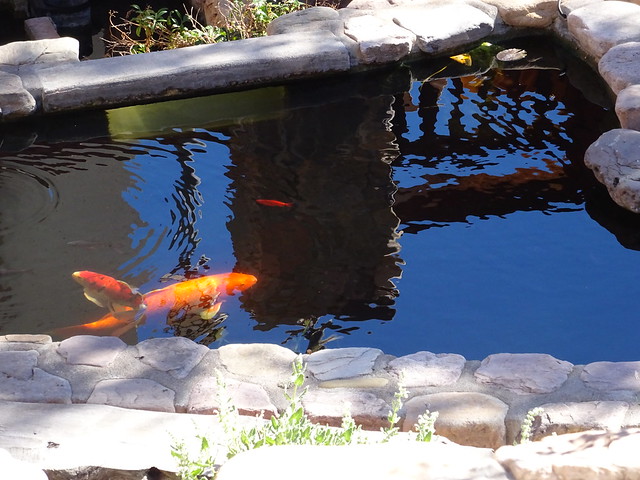 And the ponds are active 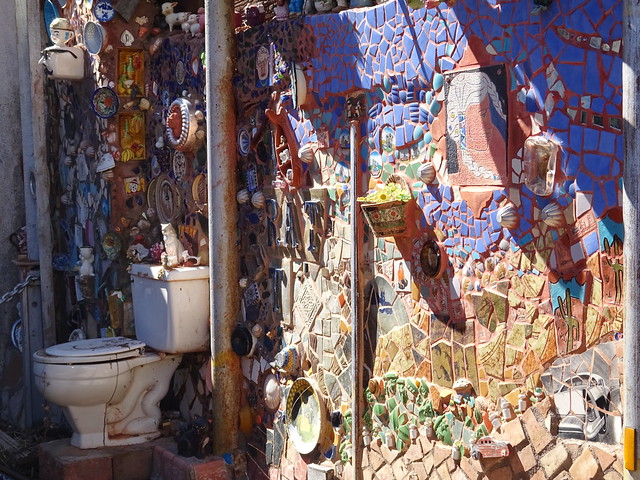 Hey, anything can be called “art”

In our next blog we’ll check out an event held each year in Bisbee called The Bisbee 1000 Stair Climb. 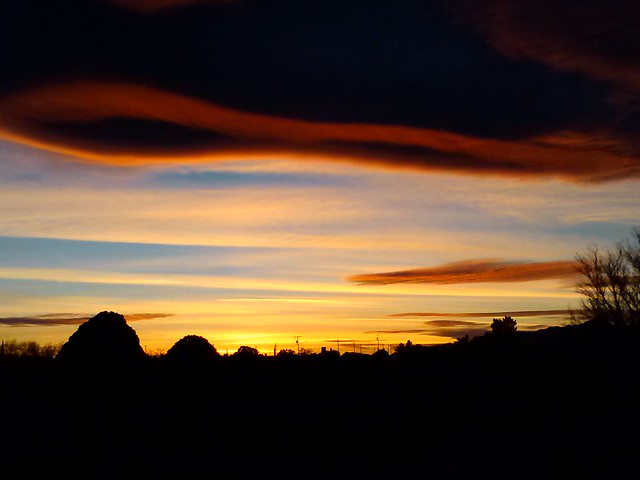 24 Responses to Visit to Bisbee Mine and History Museum