Posted on February 9, 2015 by placestheygo

During the final couple of days of our visit to this area we completed two hikes in nearby Organ Pipe Cactus National Monument.  Both were over fairly flat terrain through a multitude of beautiful Saguaro Cacti.  The first hike was on the Victoria/Lost Cabin Mine trail. 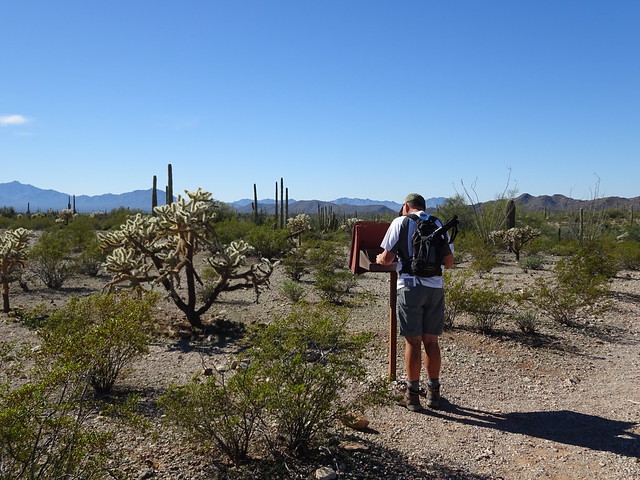 Signing in at the trailhead

Organ Pipe Cactus was once called the “most dangerous national park” and has been largely closed to the public for the last 11 years due to a high volume of immigrants and smugglers moving through the park. 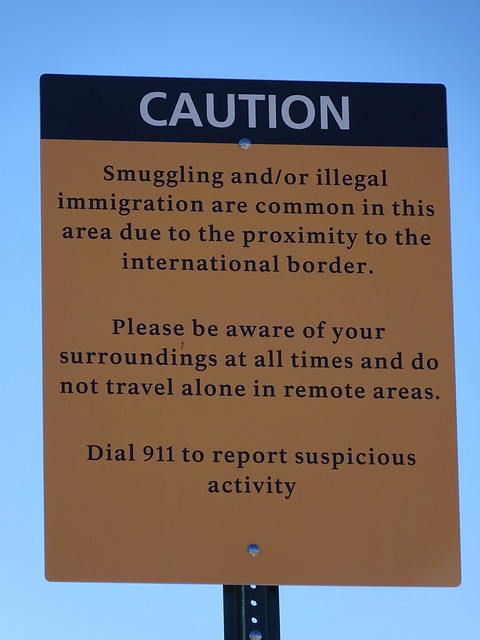 But last September all of Organ Pipe’s 517 square miles were once again opened to hikers, birders and desert lovers.  Park officials believe that increased border security and patrols have made the park safe for visitors to get off the beaten path.  During our visits to the park we never encountered any problems and felt very safe at all times. 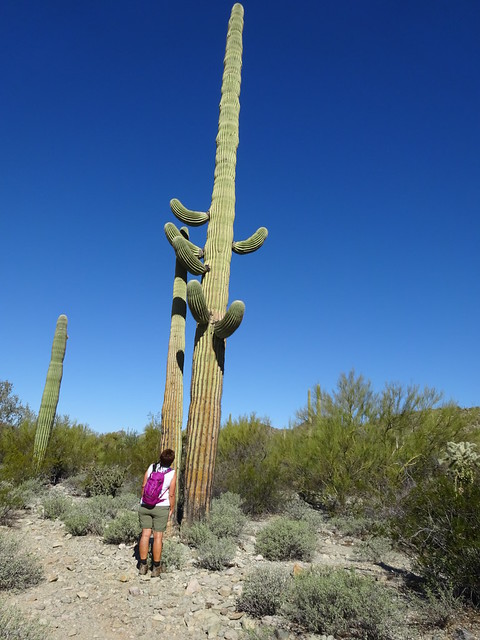 The Victoria/Lost Cabin Mine trail hike is mainly along an old mine road going over numerous rolling hills.  About two miles from the trailhead the road passes the abandoned Victoria Mine.  There were two other couples exploring the ruins, so we kept going. as the Lost Cabin Mine was two miles further up the trail. 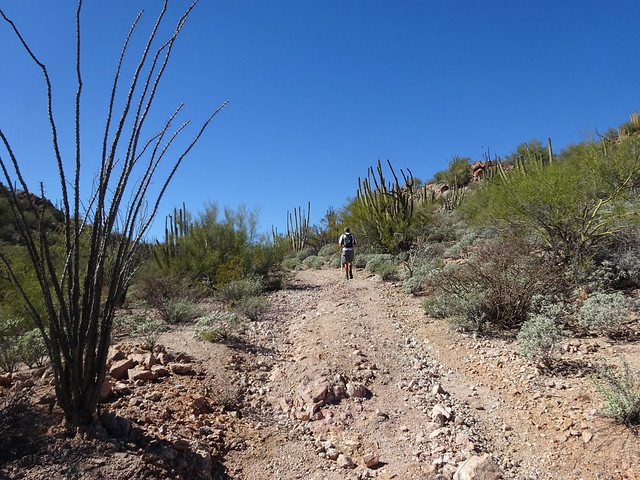 We’re not sure why this is called the Lost Cabin Mine since we found it easily.  The cabin, built in 1910, is in poor shape, with only part of the walls remaining. 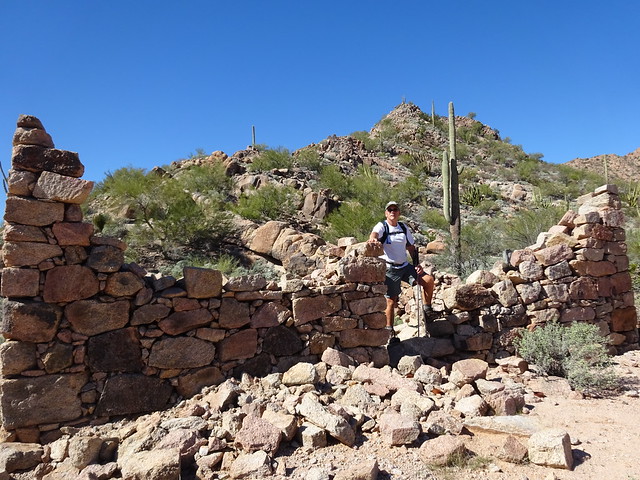 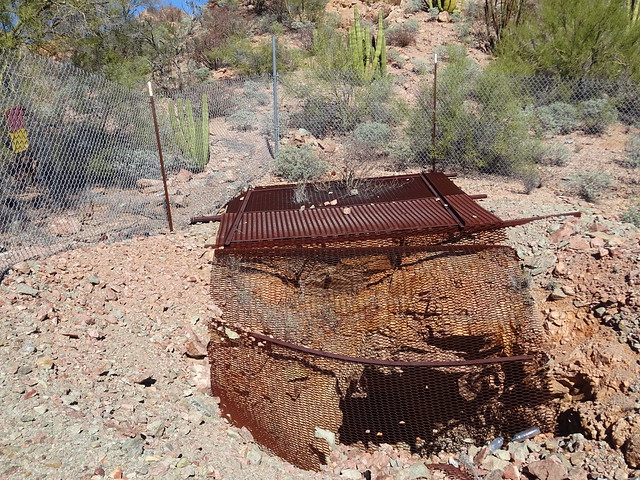 Entrances to one of the two mine shafts

The area around this mine contained a large amount of trash, evidence of immigrant or smuggler activity.  Park literature warns visitors to stay clear of anyone carrying large bundles and black water bottles.  We don’t know why the black water bottles, but we found a number of them.  All of the trash looked to have been there a long time and we saw no evidence of recent activity. 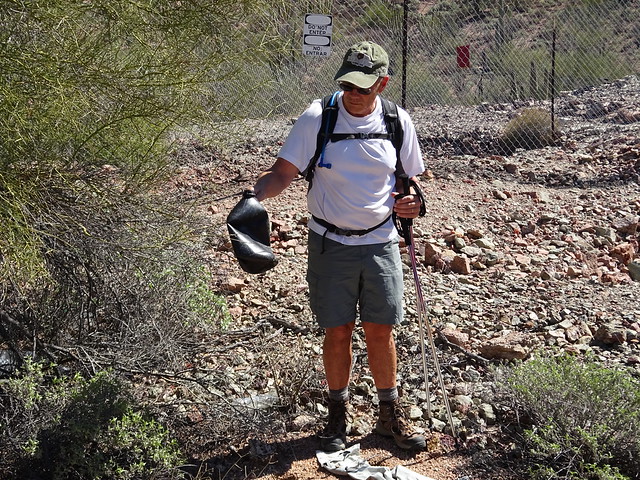 On the return we stopped at the remains of the Victoria Mine.  The previous visitors had departed so we were alone to explore. 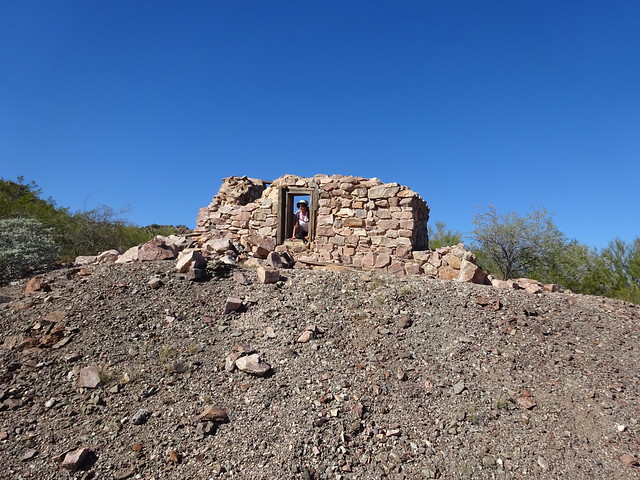 A young miner pokes her head out of the cabin 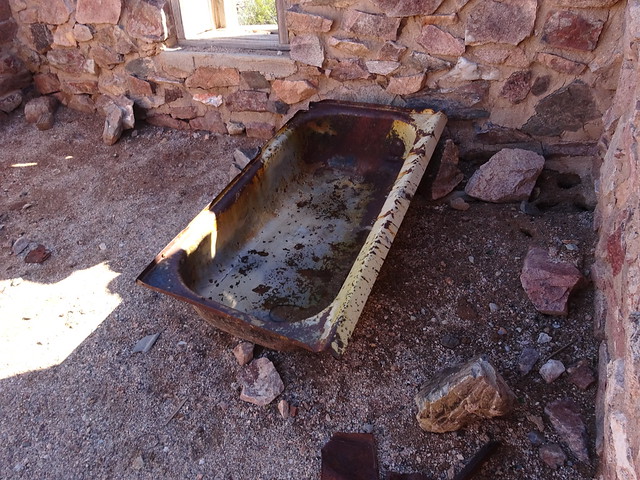 One of the things we were looking for on that hike was  a Senita Cactus, a rare plant that is only found in this area and is similar to an Organ Pipe.  We didn’t see any after hiking around for ten miles, so the next day we returned to the park to hike in to the Senita Valley on what’s called the Red Tanks/Senita Loop Trail.  We were a little apprehensive when we arrived at the small parking area at the trailhead to find a park ranger vehicle and a Border Patrol truck with a long horse trailer. 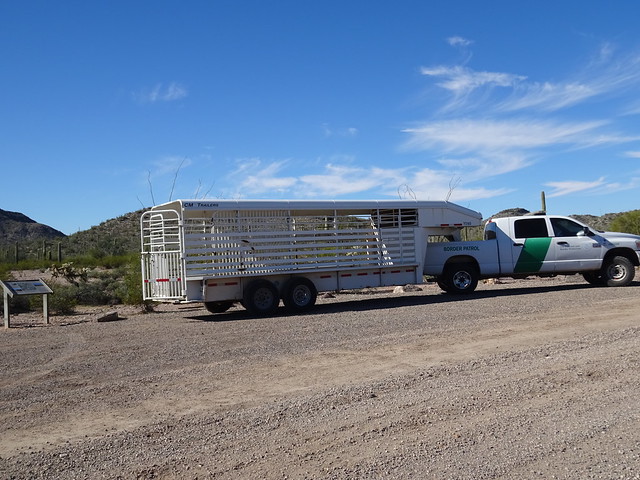 But with a posse out ahead of us checking for intruders, we set out on the trail.  After less than a mile we came to the red tanks.  The tanks are just a rocky area in a wash where water collects after a rain.  While not very impressive to look at, the sparse wildlife probably rely heavily on them for survival. 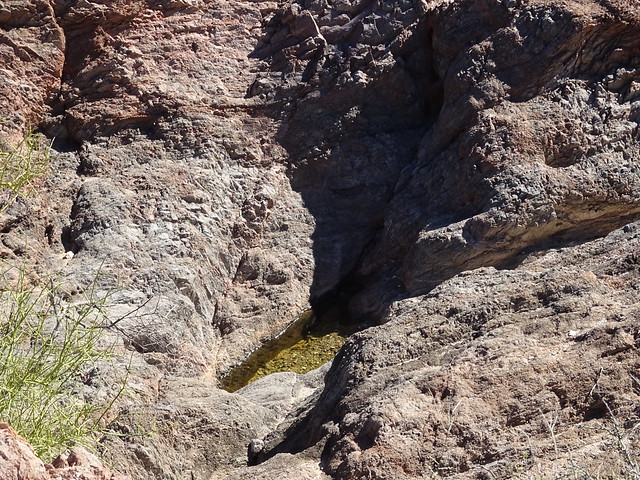 A little water in the red tanks

We continued down the wash for about a mile, passing some areas with debris from illegals who had passed through the area.  Again, no evidence of recent activity. 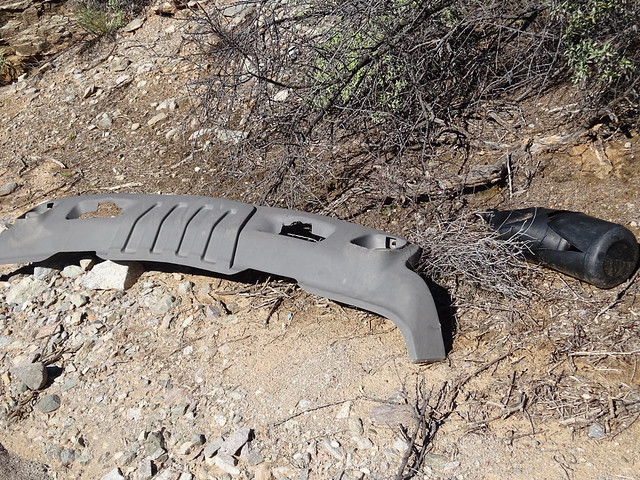 As we hiked we did spot a few interesting Organ Pipe. 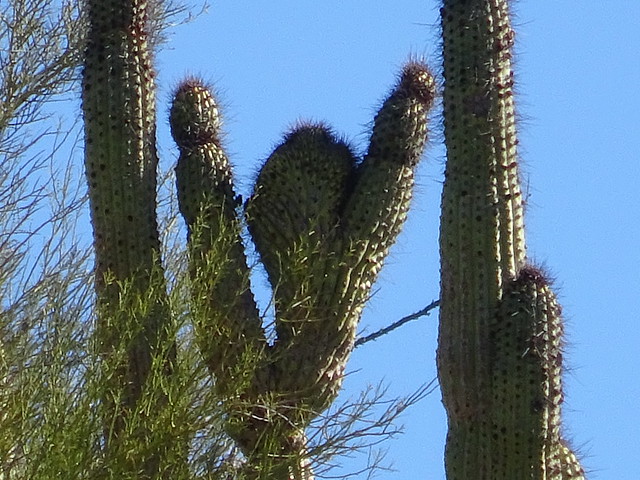 After hiking through the valley for about four miles we still had not seen the elusive Senita Cactus and were about to turn around when we came upon the posse, a group of five Border Patrol agents and one park ranger on horseback.  While the Border Patrol agents were a bit stoic and only acknowledged us with a nod and brief hello, the ranger was friendly and asked how we were doing.  We told him of our quest and he pointed us to a spot further down the trail where he had spotted a Senita.  So on we went for a tenth of a mile or so and came upon our goal, a Senita Cactus. 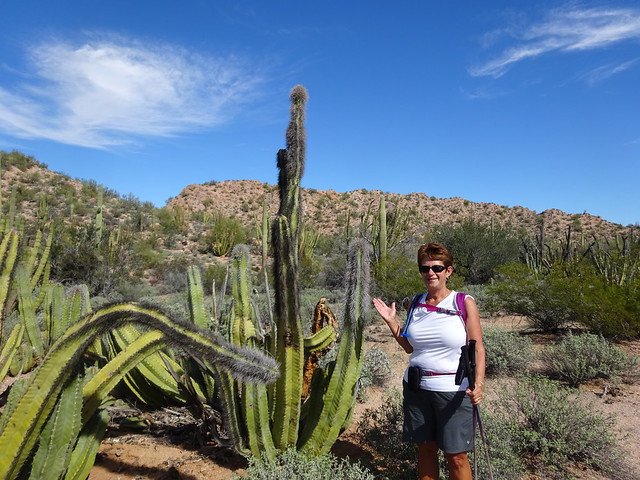 It turns out the species is not real healthy right now for some reason.  The one we found was a bit droopy and appeared to be struggling to survive.  This particular cactus is known for its long, softer needles. 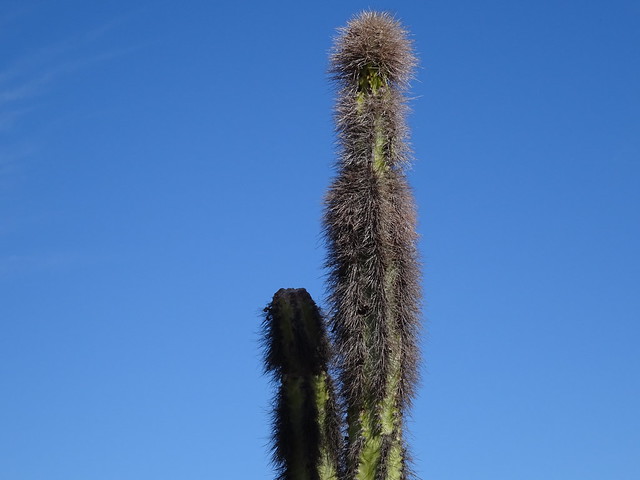 While the goal of the hike was a bit disappointing, we hike under the philosophy that it’s the journey not the destination that is important.  We enjoyed both of these hikes and the desert landscape along the way, and clocked 18 miles. 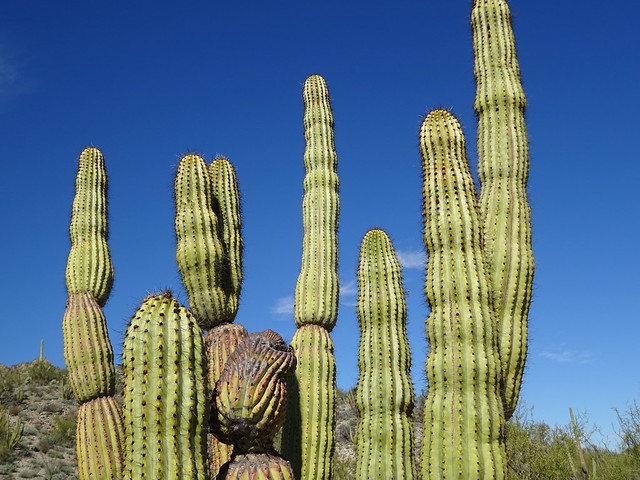 Driving back to the main highway we enjoyed a great view of the Ajo Mountains in the distance. 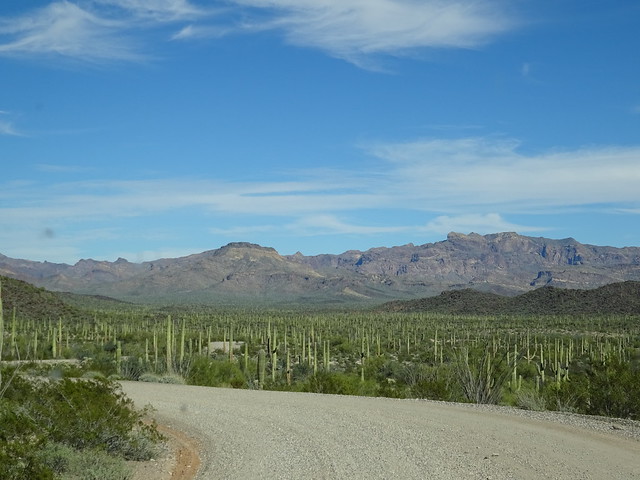 That ends our stay here at Hickiwan Trails RV Park in Why.  Turns out we really enjoyed it here as the park is very nice (and very cheap, $85 a week for FHU’s).  If the park was crowded the sites would be a little close together, but we didn’t have any close neighbors during our stay.  The sites are level (on gravel) with a concrete patio.  We recommend you check it out if visiting this area.

Next up for us is a stop in Tucson to have the motorhome serviced.  After that, ? ? ?