A Tour of Why and Ajo

Posted on February 5, 2015 by placestheygo

On our second day in this part of Arizona we decided to take a tour of the two local communities, Why and Ajo (Ah-hoe).  The area wasn’t on our schedule but we decided to come here for a visit after reading about the area in friends Hector and Brenda’s blog, Island Girl.   Their blog posts piqued our interest in the area so off we went to check out the towns.

First, we took a tour of Why (pop. 116), a tour that took about five minutes as it is really just a “Y” in the road.  But it does have one business establishment that catches your eye as you drive by, the Why Not Travel Store. 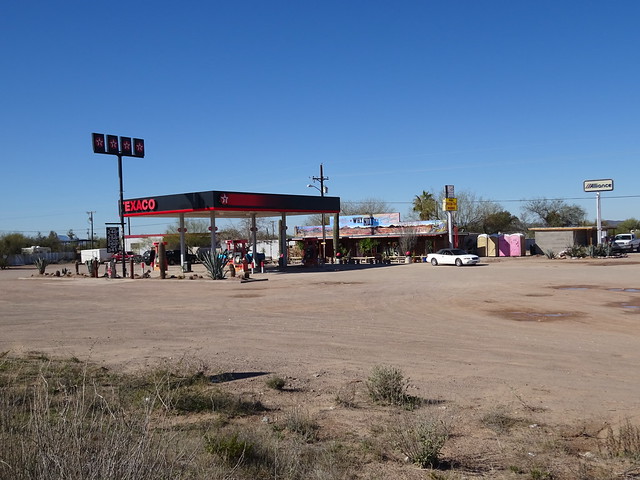 As you can see, it is really a quirky gas station/convenience store.  The sign above the store is worth a stop as you head down the highway. 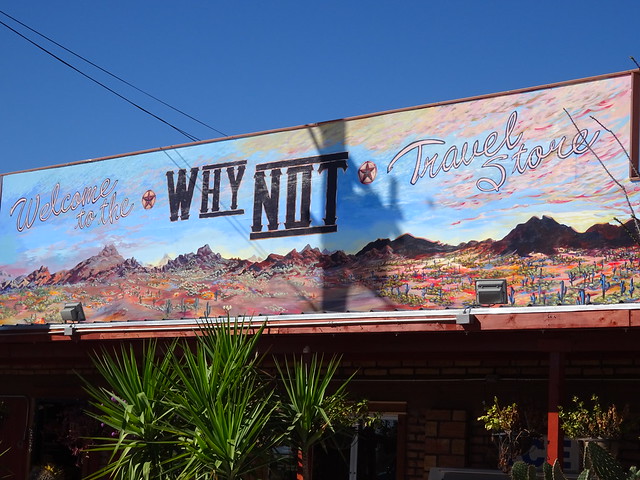 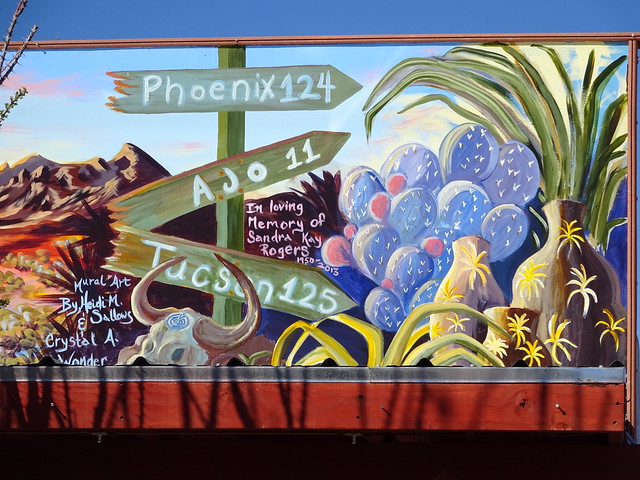 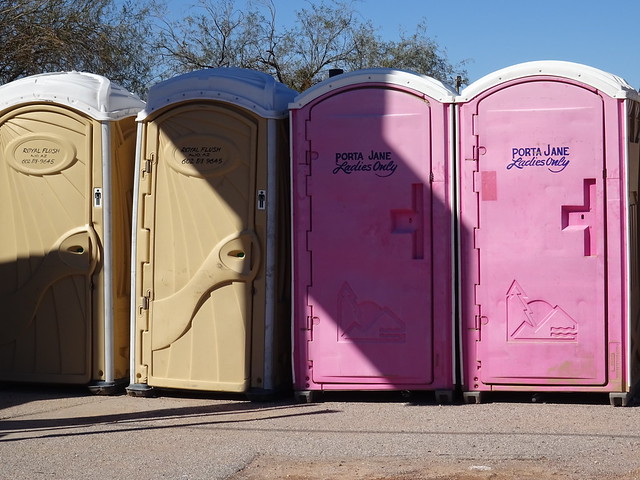 They even cater to the ladies!

As you head down Rte. 85 to Organ Pipe Cactus National Monument be sure to stop by.  We’ve been inside a couple of times and the people running the place are quite friendly.

After our tour of Why we found that we still had a little energy left over, so we headed north on Rte. 85 about twelve miles to the town of Ajo (pop. 3,799).  This is a real town complete with post office, golf course, school, grocery store, etc.

Next to the town’s only traffic light is the the plaza.  The heart of the community, the plaza, was built in 1917.  The Spanish Colonial Revival style town square features a center park surrounded by retail shops, a post office and restaurants as well as two mission-style churches. The Catholic Church was built in 1924 and the Federated Church in 1926. 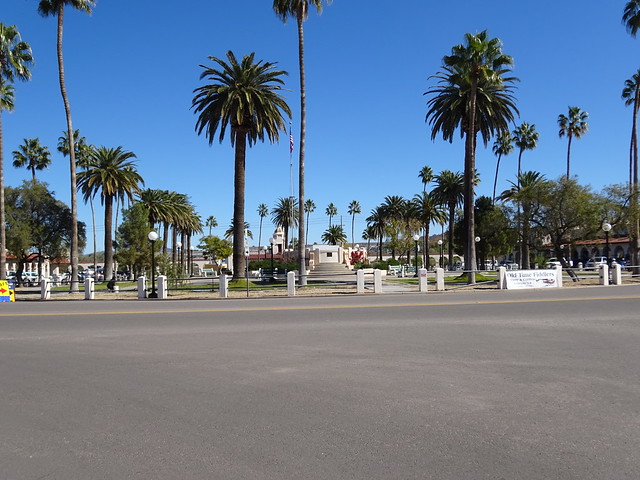 The Plaza from across the street 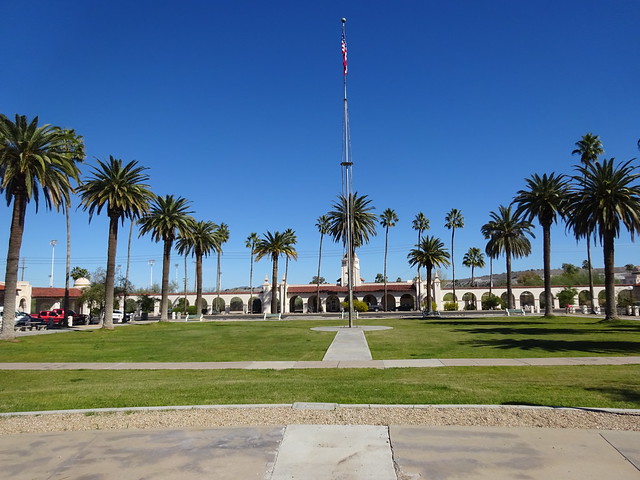 Looking across the Plaza at the old train station, now the visitor center

At the visitor center we found a brochure for a walking tour of the center of town.  The first stop was Triangle Park, a small grassy area around the corner from the plaza.  Here are historical photographs and interpretive plaques celebrating Mexican Town and Indian Village, separate neighborhoods that lasted through the 1970s. 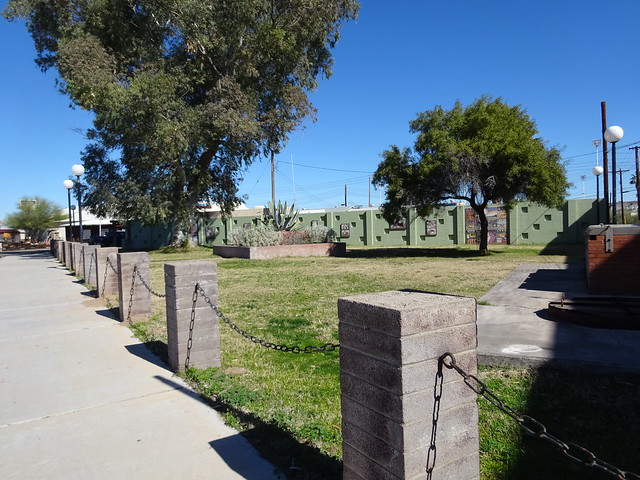 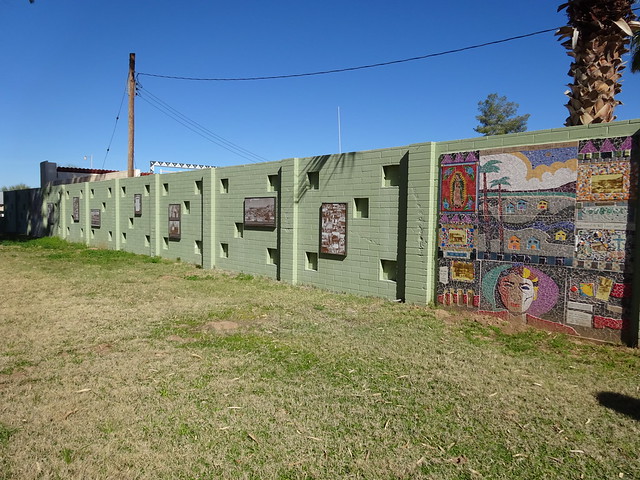 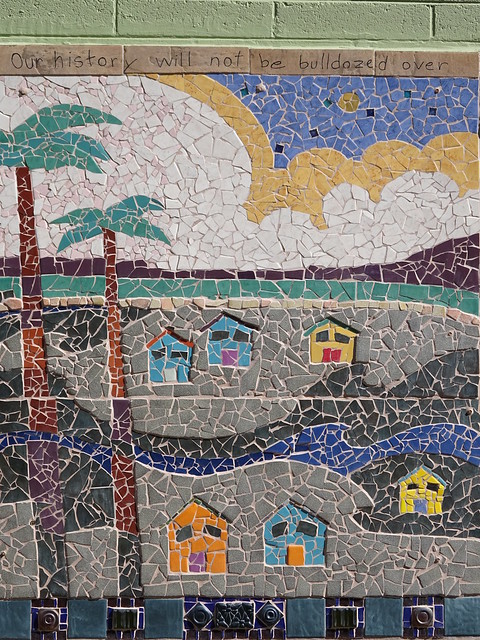 Mosaic on the wall

The mosaic above is titled “Our history will not be bulldozed over.”  It is a reference to the destruction of the two neighborhoods, Mexican Town and Indian Village.  The segregated ethnic neighborhoods were destroyed in the 1970s.  This was a company town then and the company-owned housing was to close to the expanding pit mine (more on that later). 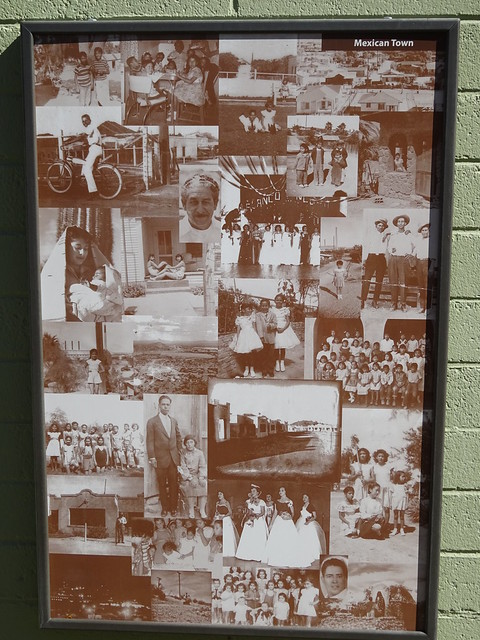 Easily visible from the town plaza is the Curley School.  The old school is built in Spanish Colonial Revival style that blends nicely with the rest of the historic downtown. The main building on the seven acre campus was built in 1919 with additional buildings added in 1926 and 1937.  At one time it contained students in grades one through twelve.  A new school was later built in town and the Curley School has been renovated into 30 affordable live/work rentals for artists and artisans. 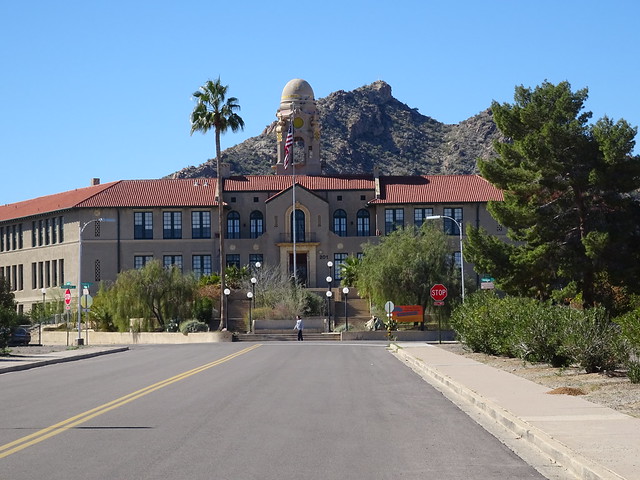 View of the Curly School from the plaza 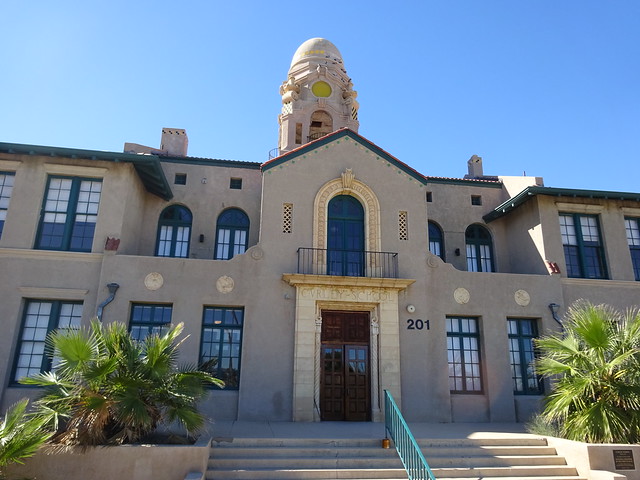 At the rear of the main building is a very large overhead door facing a concrete patio.  Our speculation about the door was confirmed later in the day when we met a long-time resident who is a volunteer at the Mine Overlook (more on that later) and attended the school.  The door opened to a stage so the audience could sit outside on the large patio for warm weather performances.  With the door closed, the other side of the stage faces a traditional inside auditorium. 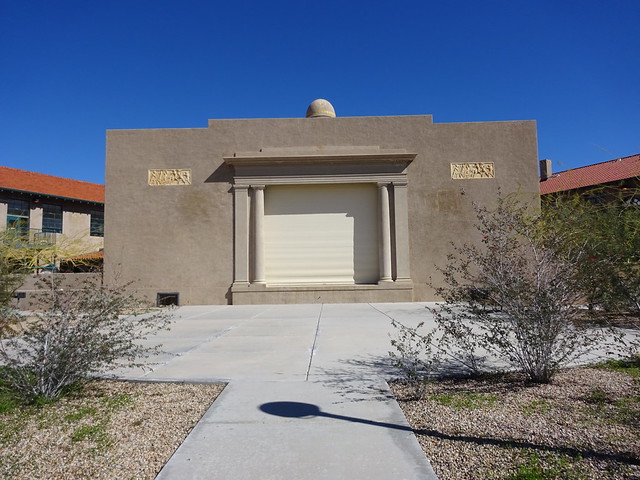 As we returned to the center of town, we passed the Immaculate Conception Catholic Church, which faces the plaza. 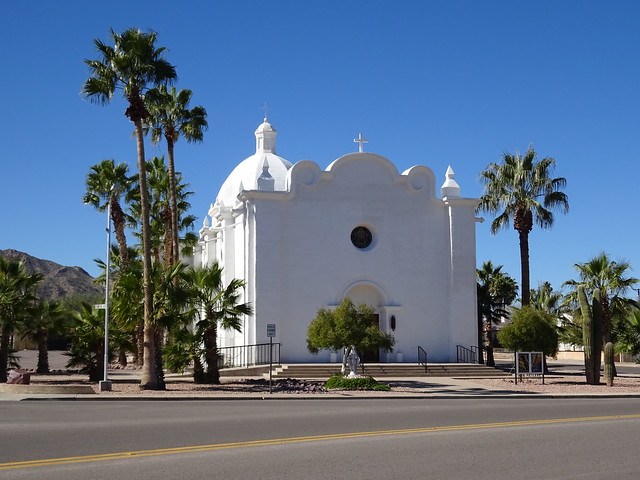 On the north side of the plaza is a long structure that has small shops, the post office, and a small restaurant. 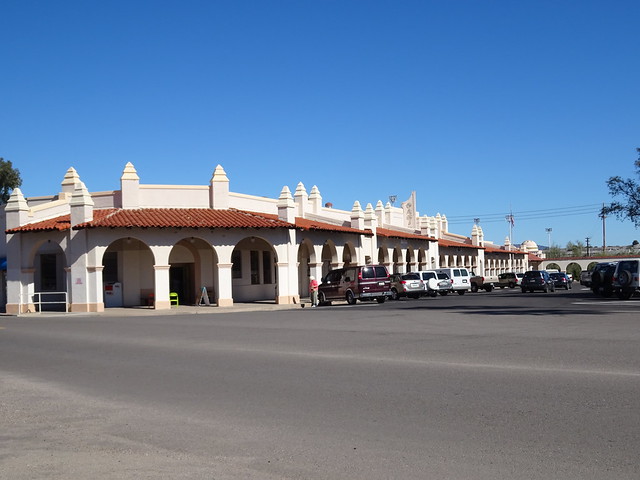 It appears that the restaurant use to be the front of an old theater.  There was evidence of two letters that were removed above the word “eat” and two were removed below.  A little creativity was applied and “theater” became “eat.” 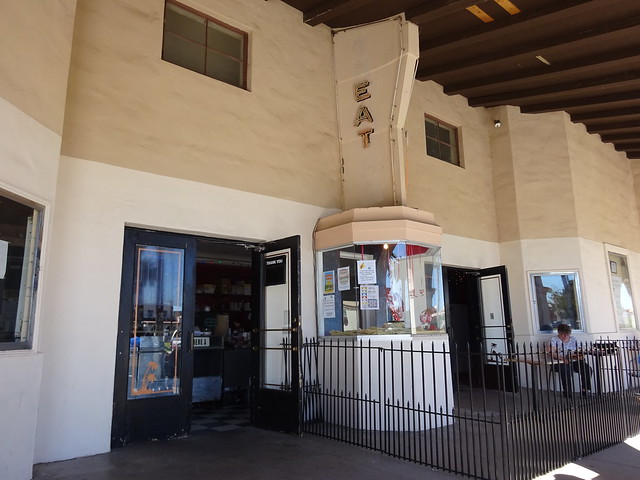 Next to the restaurant three locals were providing some free entertainment for us while we enjoyed our lunch. 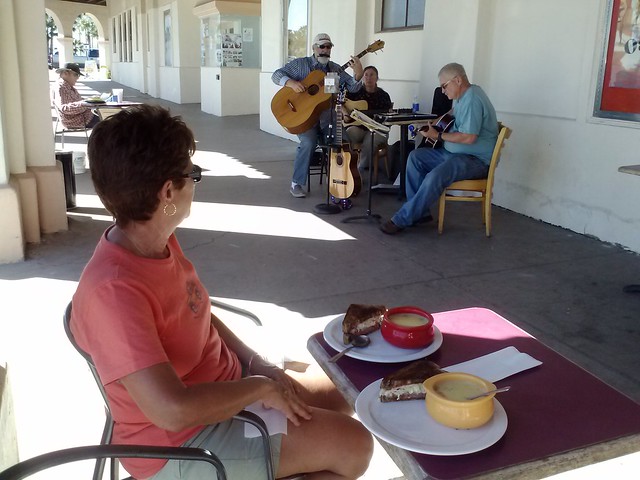 After lunch we drove a short distance to the south of the town to a small building called the Mine Lookout Museum. 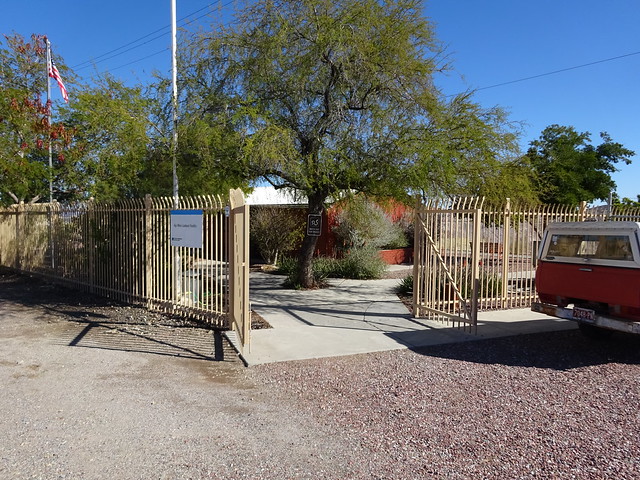 The main reason for the existence of Ajo is mining.  In the late 1800s there were a series of tunnel mines digging out a vein of copper.  In 1916 open pit mining began.  The mine pit slowly grew and today the pit is a mile and a half across and eleven hundred feet deep.  A natural spring feeds a small lake at the bottom.  The lake is up to a hundred feet deep and evaporation keeps the current level in equilibrium. 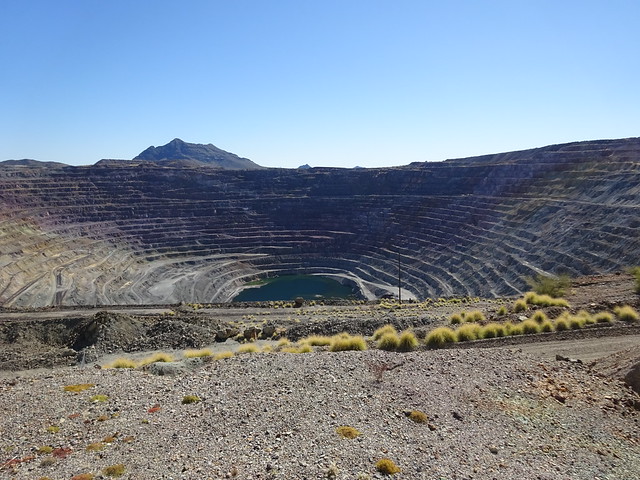 Falling copper prices caused the mine to close in 1985, creating an economic crisis in the town of Ajo.  The population quickly dropped from a high of over 10,000 to its current level of just over 3,000.  But the locals are working hard to keep the history of the town and the mine alive.  The small Mine Overlook Museum is an example of this effort.  Lifetime resident Bob Hightower and his wife volunteer at the museum each afternoon during the winter months.  Bob grew up in Ajo and worked at the mine in maintenance for over forty years.  He enthusiastically gave us information on the many old photos showing the development of the mine. 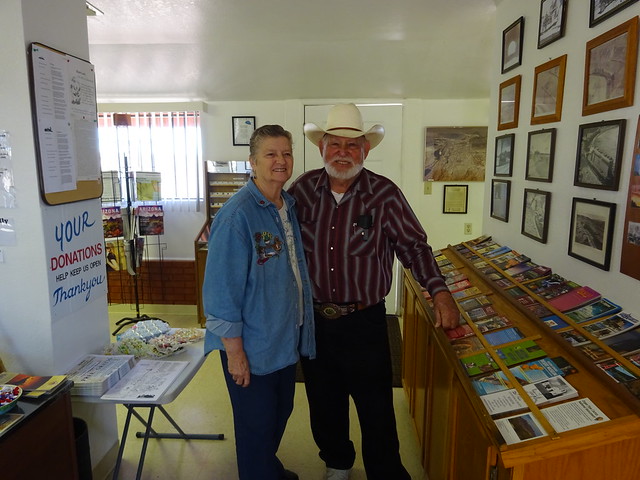 Bob HIghtower and his wife

Not far from the Mine Overlook Museum is the Ajo Historical Society Museum.  Located in the old St. Catherine’s Indian Mission, the museum houses many artifacts and mementos from Ajo’s past. Louie, the head volunteer curator, gives visitors a great overview of the history of the town.  He is a retired history teacher so John really enjoyed talking with him.

Wow, this sure is a long blog for such small towns.  But as you can see there is much to see in Ajo and we recommend stopping by if you’re ever in  this part of Arizona.

16 Responses to A Tour of Why and Ajo