One of the “must do” activities Pam had on her list of things to do during our visit to southern California was a farm tour in El Centro.  El Centro is the county seat of Imperial County, CA, one of the most important agricultural areas in the country.  Since it is only about seventy-five miles from where we were in Borrego Springs, we decided to stop in El Centro on our way east to check out the tour.  We made reservations for the Tuesday tour (tours don’t run every day) and drove down to El Centro on Sunday.

For the two nights we would be in El Centro we decided to dry camp in an area known as Plaster City, about fifteen miles west of town.  Plaster City is an OHV (Off Highway Vehicle) area near a gypsum plant.  We understand it is quite busy on the weekends, but it was virtually empty during our stay. 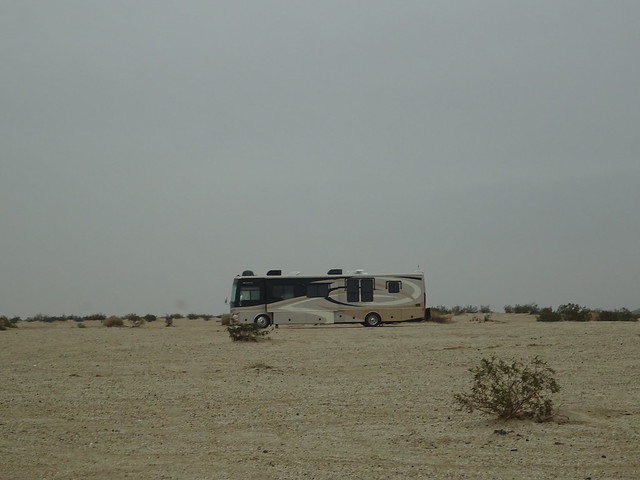 All alone in Plaster City

We came here Sunday afternoon, a day earlier than planned as the weather prediction was calling for a good chance of rain on Monday.  It doesn’t rain much around here but the weather prediction was right on the mark, as it rained hard Monday afternoon.  In fact, it rained enough that the Tuesday tour was cancelled as the fields would be too wet.  Fortunately we were able to get reservations for the next day, Wednesday.  Since that would leave us with another day sitting out in Plaster City (after being there all day on Monday),  we decided to pull up the jacks on Tuesday and head sixty miles to the east to Yuma, AZ, our next scheduled stop, and just drive the Jeep back to El Centro for the Wednesday tour.  There appears to be about a thousand RV parks in Yuma, so finding a park on short notice is not a problem.  We’re now sitting comfortably in Westwind RV Resort for a four night stay.

Wednesday morning we were up and on the road early for the drive back west on I-8 to finally take the farm tour.  The tour is put on by the University of California Agriculture and Natural Resources at their experimental farm east of El Centro as part of their FARM SMART educational program.  The FARM SMART tour features a research field tour, “u-pick” fresh vegetables, lunch, a program about Yuma/Imperial Valley agriculture, entertainment, prizes, and ice cream.  All this for $20 (cash only)! 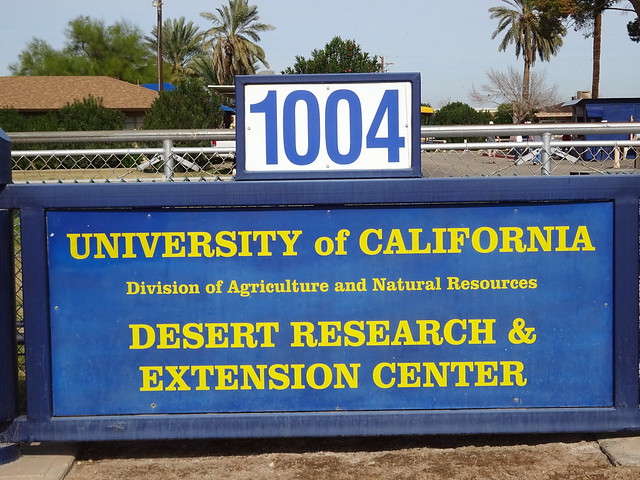 The tour began with a cooking demonstration on a recipe for Carrot Ginger Soup.  One of the tour guides conducted the demo with the help of two volunteers.  John quickly climbed out from under the table once the volunteers were chosen! 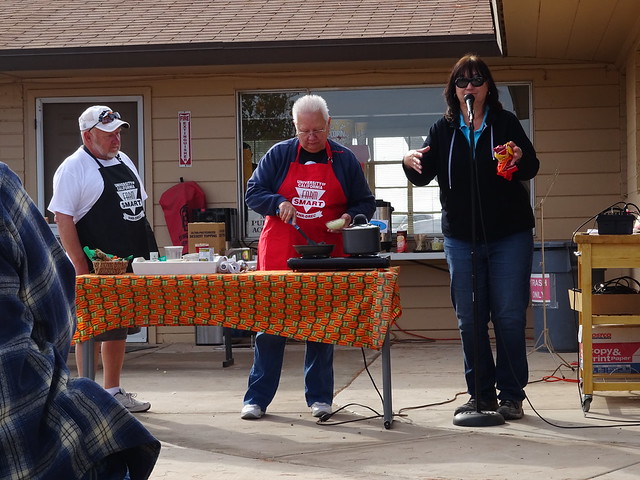 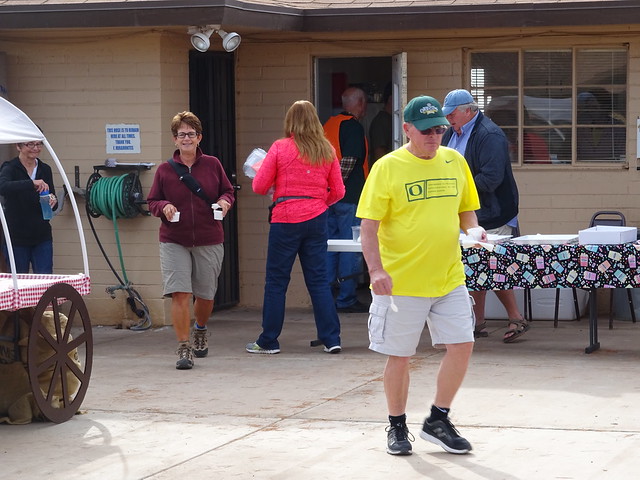 The sample was very tasty

Following the demonstration, tour participants were divided into two groups.  One group went to a presentation room to hear about agriculture in the Imperial Valley, while the other group boarded two wagons for a tour of the fields.  After lunch the groups would switch activities.  We were in the group touring the fields. 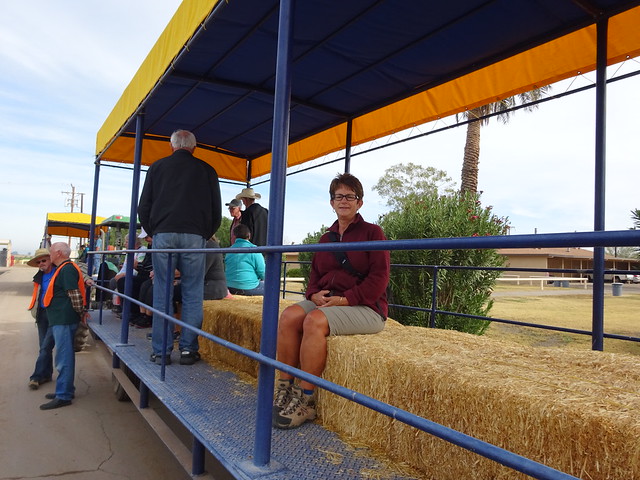 At various spots the wagon would stop so the tour guide could talk about what we were seeing.  This is an experimental farm so all the fields are planted with crops as part of some sort of test activity. 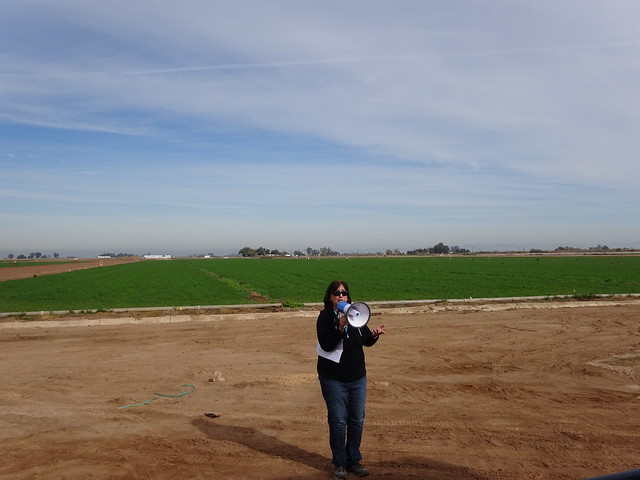 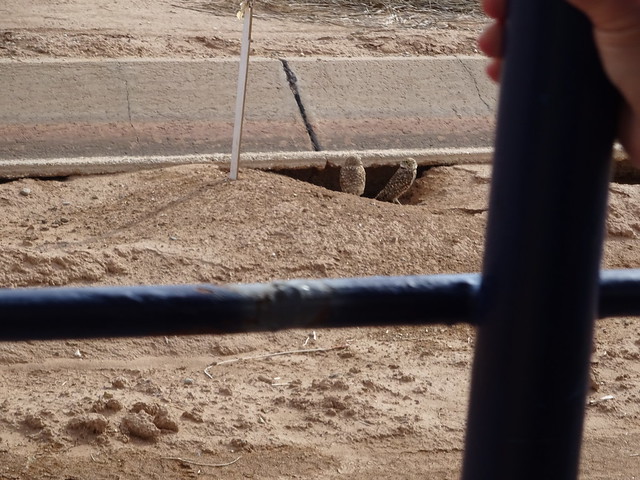 Burrowing Owls along the tour

All experiments in one field had been completed, so tour participants were allowed to harvest the heads of romaine. 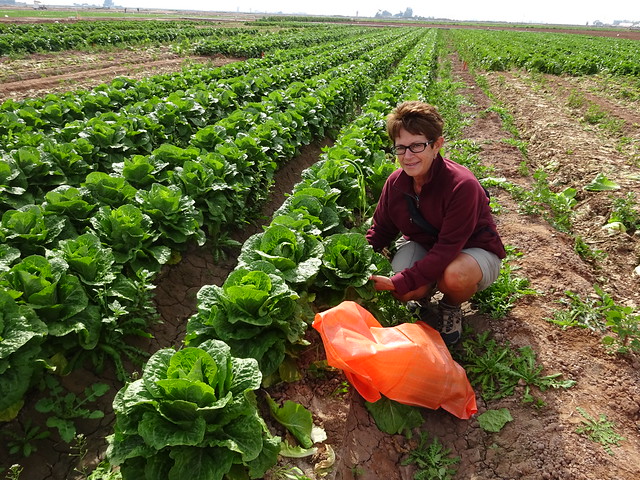 A local farm worker smiles for the camera

When we arrived, each participant was given a large bag they could use to carry their harvest.  Our final stop on the tour was The Farm Smart field which contained broccoli, cauliflower, cabbage, beets, swiss chard, head lettuce, cilantro, and celery for the participants to harvest. 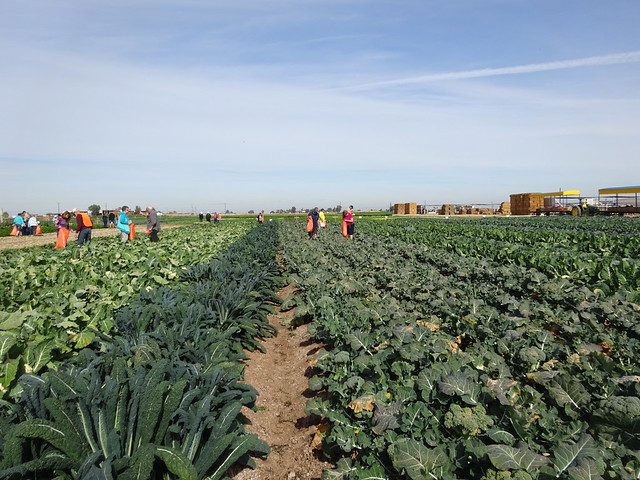 A Field of Dreams

As we drove through the farm we passed a field filled with olive trees.  Olive trees are not currently grown in the Imperial Valley, but the experimental farm is testing to see if it would be economically feasible to grow them in this area. 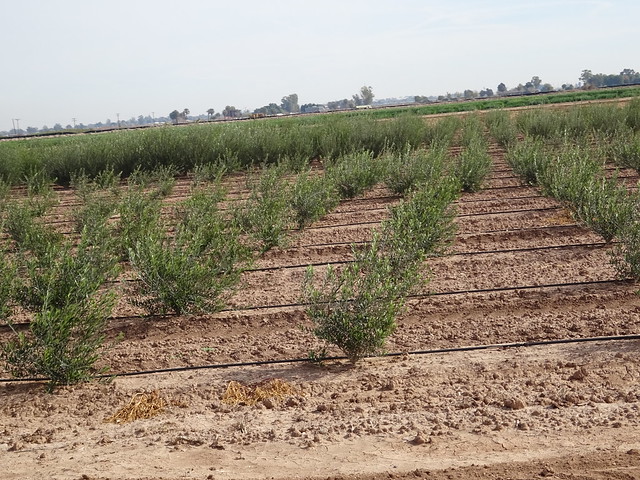 Lunch is included in the price of the tour.  We’re on a vegetable farm in the southwest so we should not have been surprised when the meal was a Southwest salad!  It was delicious. 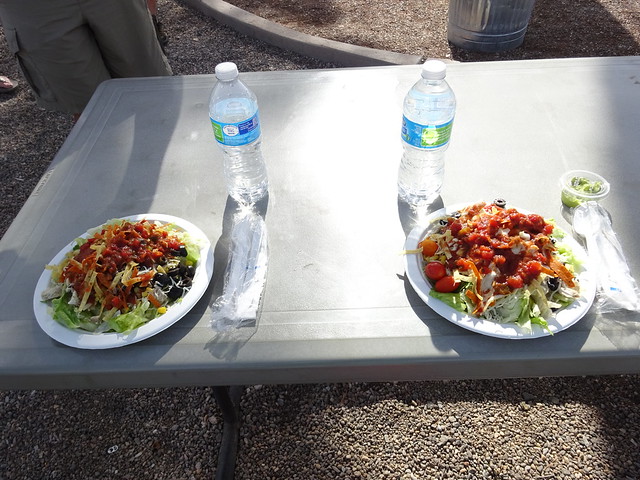 As we finished lunch one of the volunteers entertained the group with a concert playing Native American flutes.  He was pretty good but went on a bit long for our taste.  We were unsure just how flute music fit into the “farm” atmosphere. 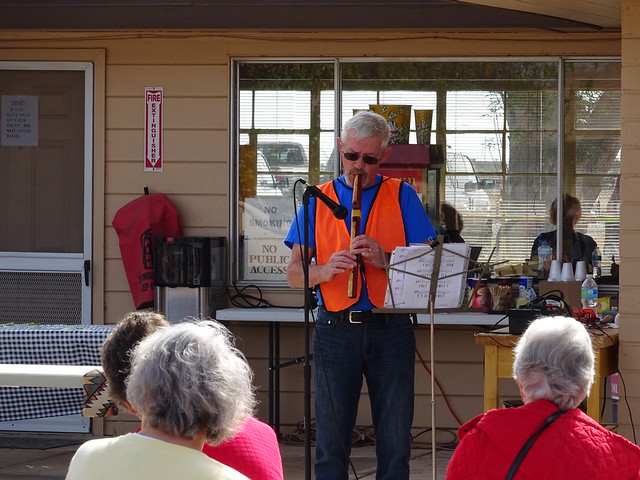 When Sam, the tour leader, introduced the flutist, he also said that after that he would sing a song following the flute music.  We didn’t think much about it as we thought that he must be kidding, but we were wrong.  After the flute concert Sam came to the microphone and sang the theme song from Phantom of the Opera.  He had a nice voice and did a great job, but now we were really confused as to how the song fit in with the broccoli and cauliflower! 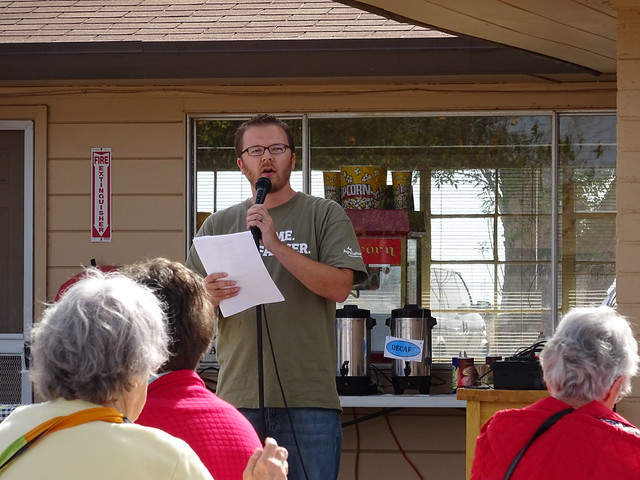 After lunch we went to the presentation room to listen to Sam tell us about various aspects of farming in the Imperial Valley.

Returning back to the motorhome in Yuma after the tour, Pam spent more than a few minutes cleaning the harvest and storing it in the refrigerator. 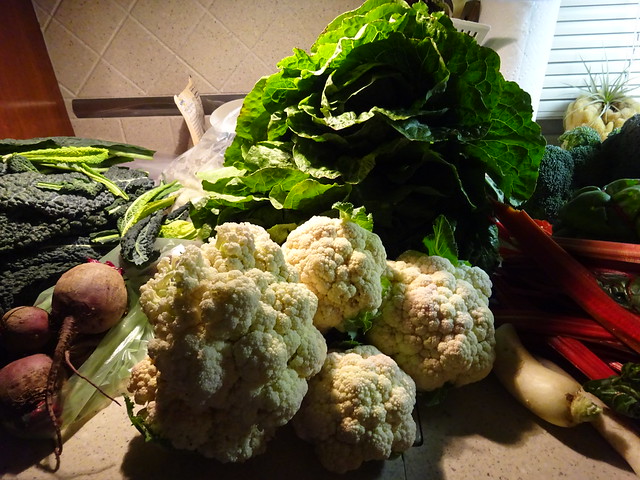 A portion of the harvest

We enjoyed the tour a great deal (OK, Pam more than John).  If you’re in this part of the country it is definitely worth the time to check it out!