Our friends, Terry and LuAnn, (Paint Your Landscape) are spending the winter near Temecula, about an hour drive from Borrego Springs.  We drove up to visit with them during our recent stay in San Diego and invited them to join us for some hiking here in Anza-Borrego Desert State Park.  Two years ago we were here and did three short hikes in Blair Valley, about forty miles south of us, with Howard and Linda of RV-Dreams.  We enjoyed the hikes, so we decided to go back and hike them again with Terry and LuAnn.

Our first hike was a short one to the top of Ghost Mountain to visit the remains of the home of Marshal South and his family.  A one mile long steep trail from the southern edge of Blair Valley leads up to the site on a flat mesa just below the top of the mountain. The skeletal remains of the house, known as Yaquitepec, still stand — a rusted bed frame, the base of a large adobe oven, the frame for an arched doorway, and many cement and barrel cisterns that once caught the seasonal rainfall, the only water available other than what was hauled up the trail.  Here is where poet, author, and artist Marshal South and his family lived from 1930 to 1947, pursuing a primitive and natural lifestyle that became well known through South’s monthly columns written for Desert Magazine.  Abandoned for 68 years, the desert is slowly reclaiming the mesa as the structures deteriorate. 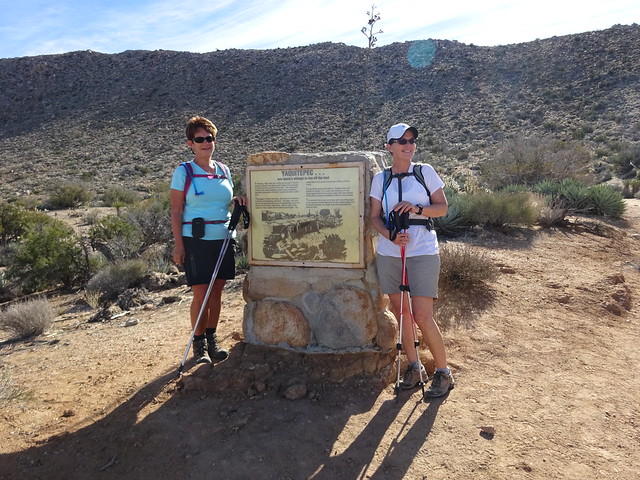 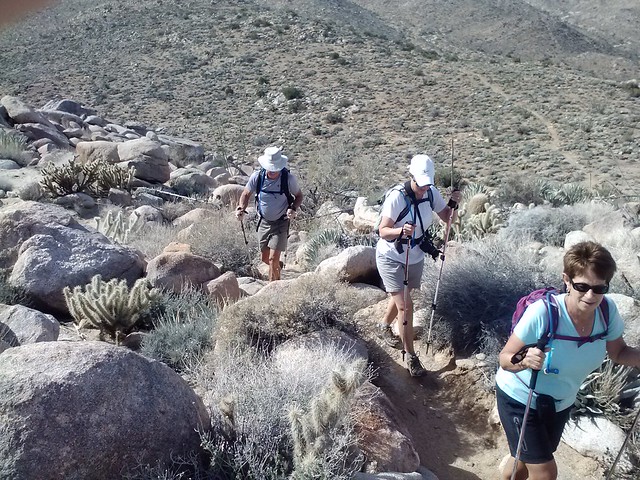 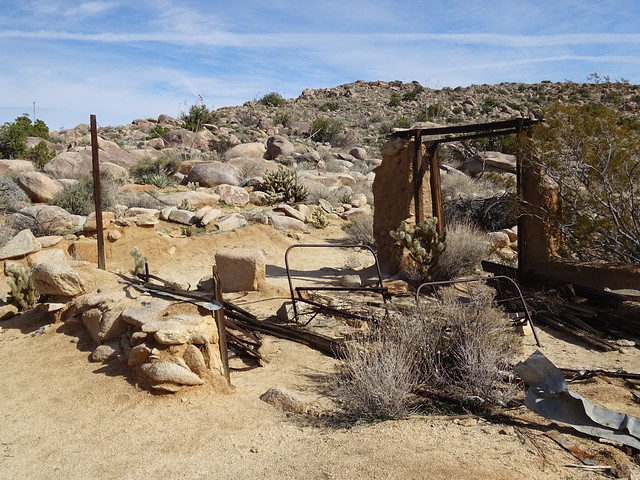 Remains of the house 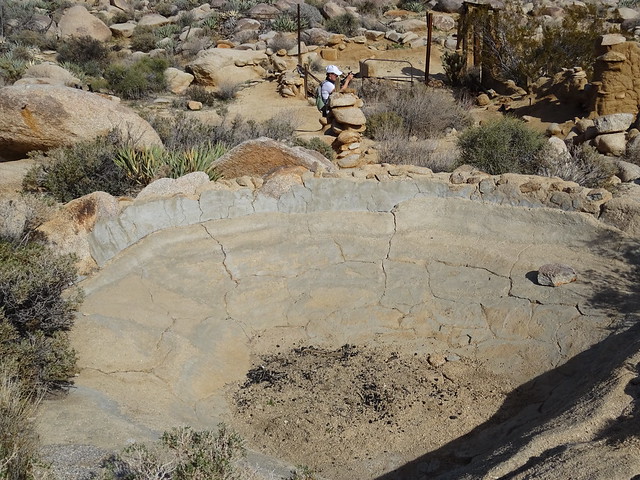 A cistern to gather precious rainwater 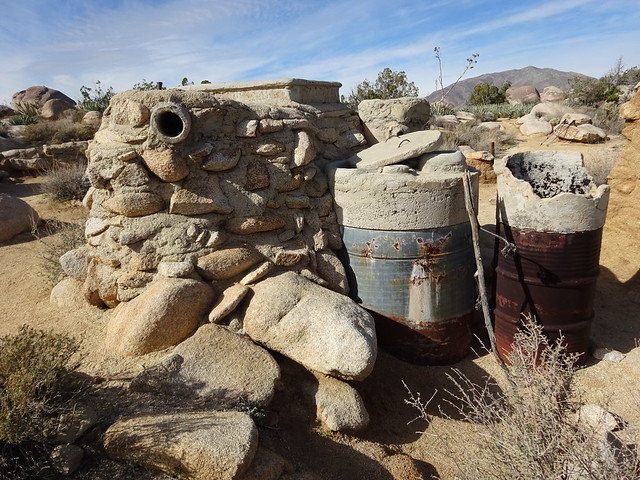 Storage for the collected rainwater 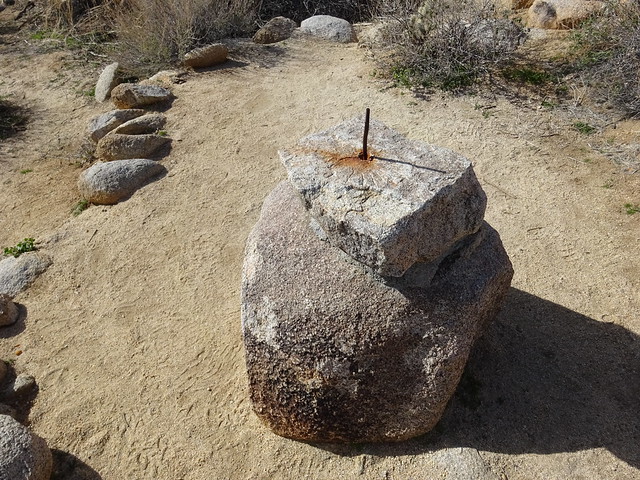 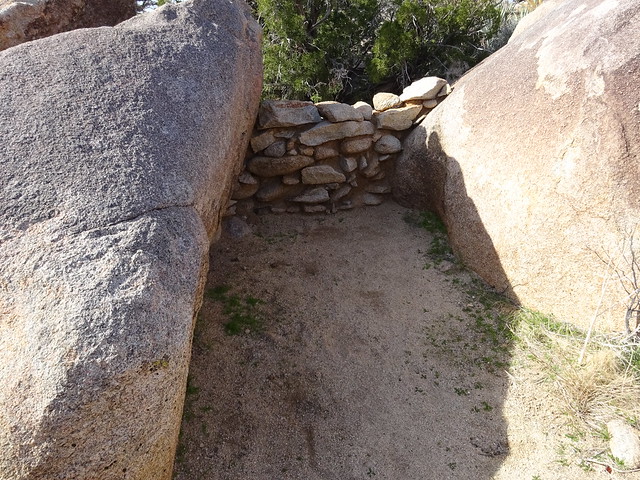 Possibly a meditation site (the Souths were devotees of the activity)

Standing near the edge of the mesa it is easy to see why the Souths loved the area.  It is quiet, peaceful, and the views are impressive. 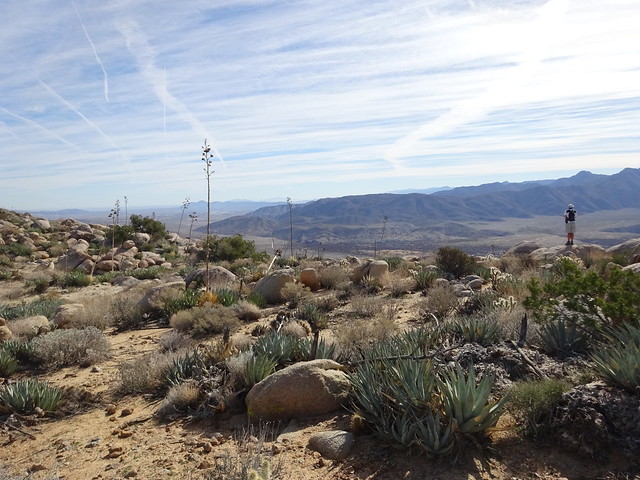 After returning down to the Jeep, we drove a few miles to the trail leading past some pictographs and into Smuggler’s Canyon. 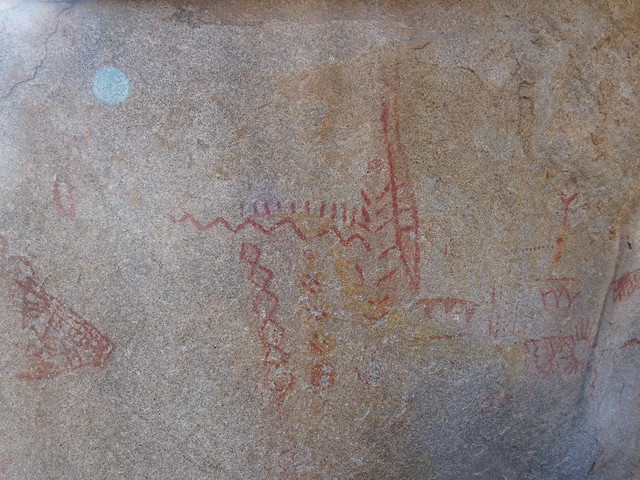 Ancient Artwork (according to John it is Early American Graffiti) 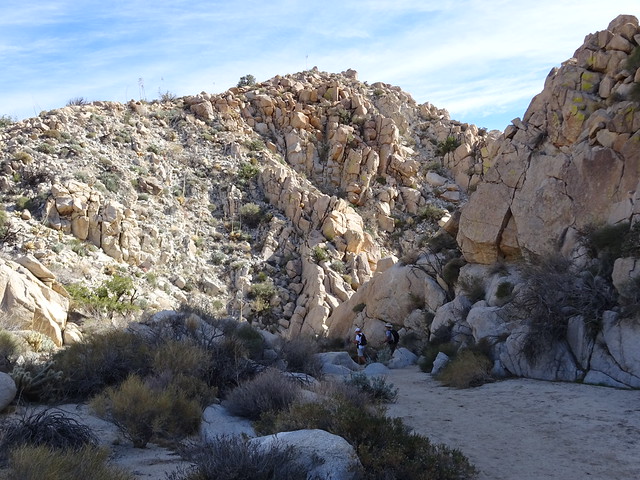 Heading down into Smuggler’s Canyon

Smuggler’s Canyon ends abruptly at the top of a dry waterfall with a spectacular view of the valley below.  We sat here for lunch while enjoying the scenery. 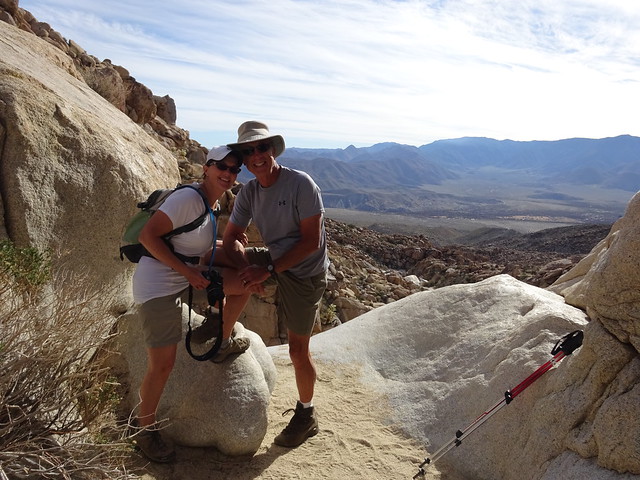 Hiking back up the wash we enjoyed a rare phenomenon, a sun halo.  Also known as a 22 degree halo, the ring is caused by sunlight passing through ice crystals in cirrus clouds within the Earth’s atmosphere.  The crystals bend direct sunlight, projecting it elsewhere into the sky, and at a certain angle — you guessed it, 22 degrees — a halo can be seen around the sun. 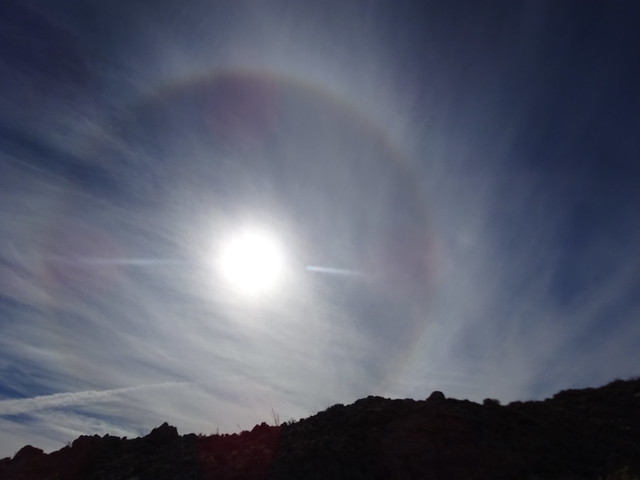 Returning to the Jeep, we drove a short distance to a trail head leading up a canyon to a collection of morteros.  For almost a thousand years Native Americans visited this area on a seasonal basis.  From September to May they used the canyon as a base from which to gather pinon nuts, mesquite beans, and desert agave.  Nuts and seeds were pounded into meal in morteros, the large depressions we saw in the granite boulders. 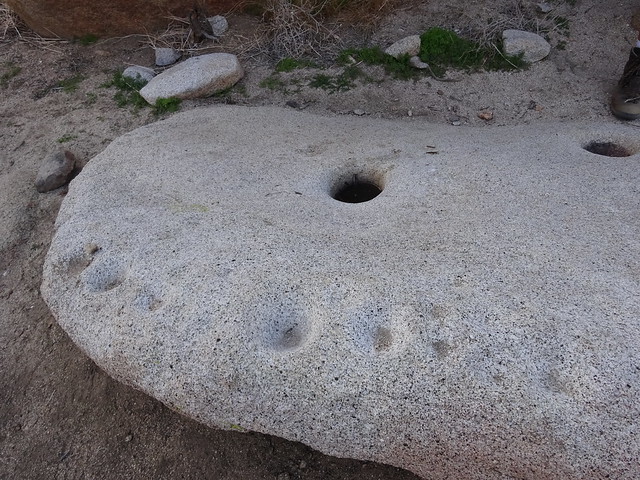 After driving back to the Borrego Springs area, we drove a few miles to the west to show Terry and LuAnn the beautiful views from Font’s Point.  LuAnn is an avid photographer so we knew she would enjoyed the great photo ops there. 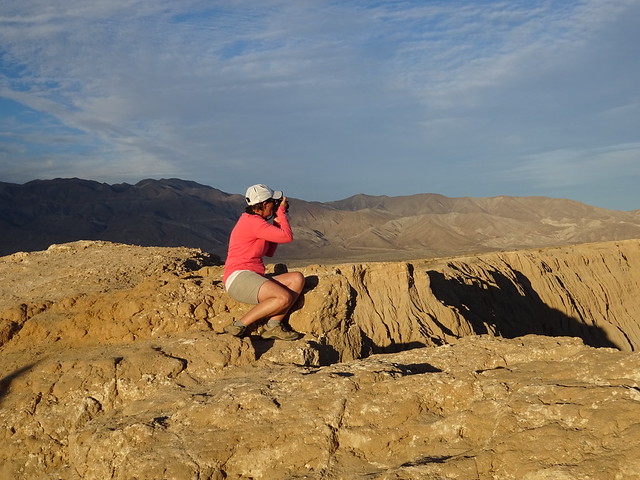 We didn’t intend to stay at Font’s Point very long, but as the sun began to go down it looked like we might be treated to a great sunset.  So we stayed around a while to see what would develop.  Our patience was rewarded! 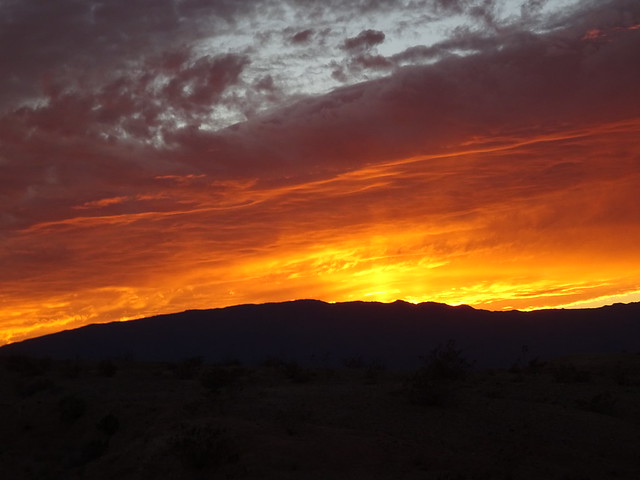 We watched the light show for a while, then began the return trip to town.  But as we drove away we had to stop a few times as the light show continued. 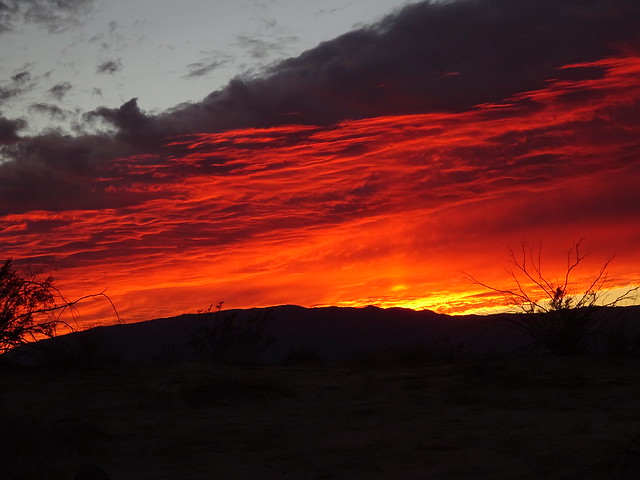 A great day ended with a great meal at Carmelita’s Mexican Grill.

20 Responses to Hike to Ghost Mountain