We recently moved from Santee, CA to Mission Bay RV Park, about twenty miles to the west.  The park is right on Mission Bay just a few miles from the ocean.  We booked one of the sites that back up to the bay for a month so we can enjoy the great sunsets over the water.  Also, our daughter, Jessica, is flying in for a visit over the holidays, so we are conveniently located near the airport. 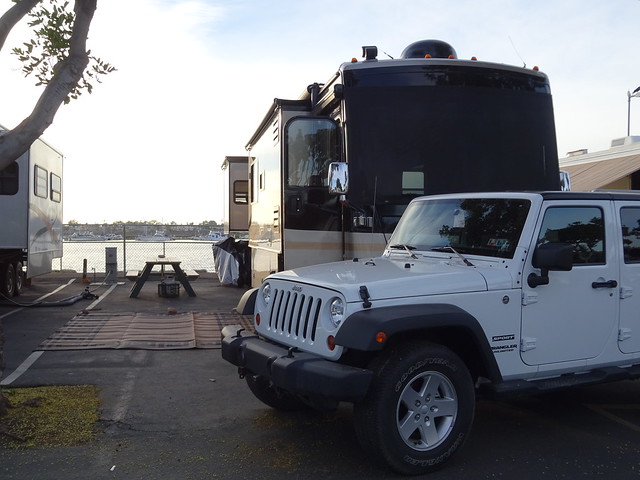 Our friends, Hans and Lisa, are still back in Santee but will also be moving to Mission Bay in January.  Hans and Lisa are former residents of San Diego and have extensive hiking experience in the area, so we love to take advantage of their experience and guidance on some of the best local trails.  Recently we picked them up near Santee and drove east on I-8 into the mountains to tackle one of their favorites, the Morena Butte Trail.

The trailhead for this hike is located at the entrance to Lake Morena State Park, just south of I-8 about fifty miles east of San Diego.  The hike begins on a portion of the Pacific Crest Trail.  The PCT is a trail that goes from the Mexican border to the Canadian border, a distance of about 2,663 miles.  It is the trail featured in the new movie Wild, starring Reese Witherspoon (although the main character in the movie started up near Los Angeles and hiked north). 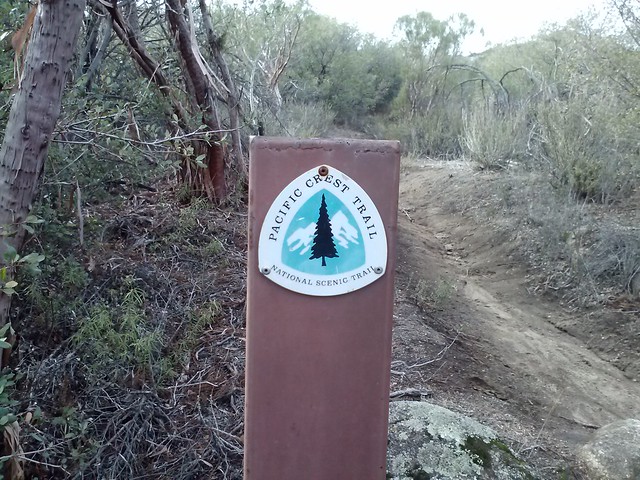 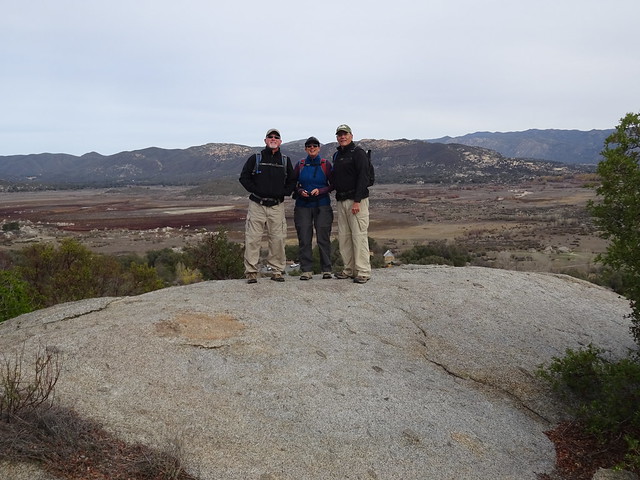 Hans, Lisa, and John with the main section of Morena Lake in the background

Can you see the lake in the background in the picture above?  OK, so there is no water visible.  Morena Lake is really a reservoir created by a dam built in 1912 as part of San Diego’s water system.  It is one of the few facilities in the San Diego water supply system that relies entirely on local runoff, and lately that runoff has been a bit sparse.  In fact, today the reservoir is only at 3% of capacity.  We’ll look at the lake from a higher position later in this blog, so hold on to that thought. 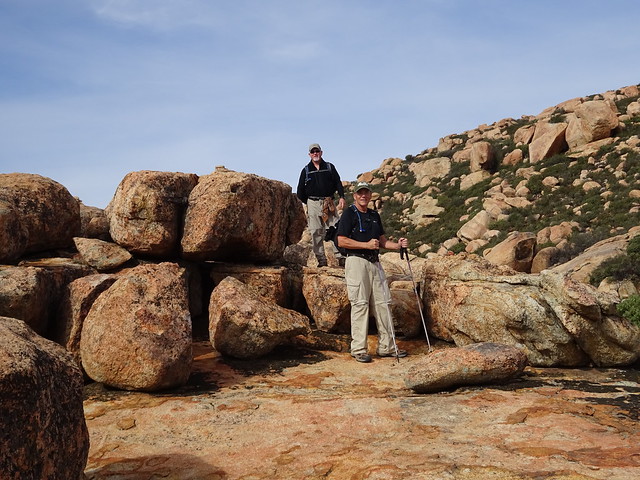 Climbing up to the top of the Morena Butte

After about three miles we left the PCT and headed up a narrow trail headed for the top of Morena Butte. 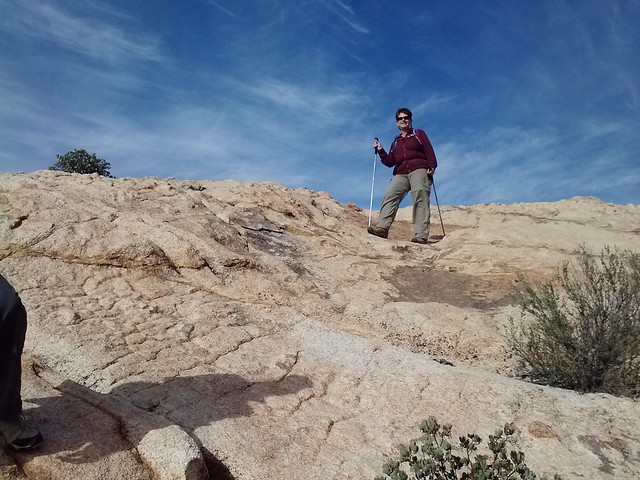 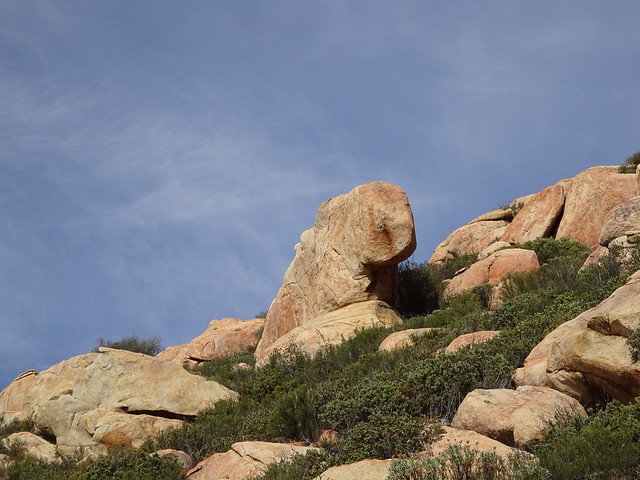 We spotted a Manatee enjoying the sunshine

OK, remember the discussion of the lake earlier in the blog (go back and re-read it if you need to, no one will know!).  The picture below is a view of the lake from on top of the butte.  Water is now clearly visible, but this is only a small section of the reservoir near the dam.  The large, flat area above the water, in the center of the photo, should be filled with water also. 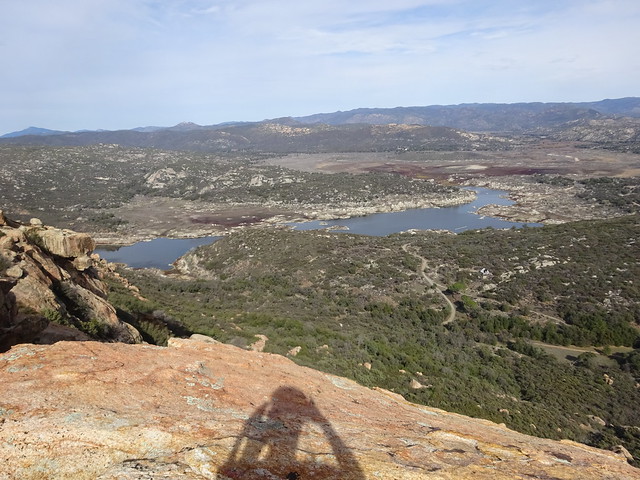 The main reason the lake is so low is that the city of San Diego owns the water and decided to let most of the water run out of the lake and down to a treatment plant, then in to the city’s drinking water supply.  This is cheaper than purchasing water from the Colorado River and saved the city five million dollars.  But the County of San Diego owns a state park by the reservoir and is not to happy that the lake, a fishing and recreation attraction, is pretty much gone! 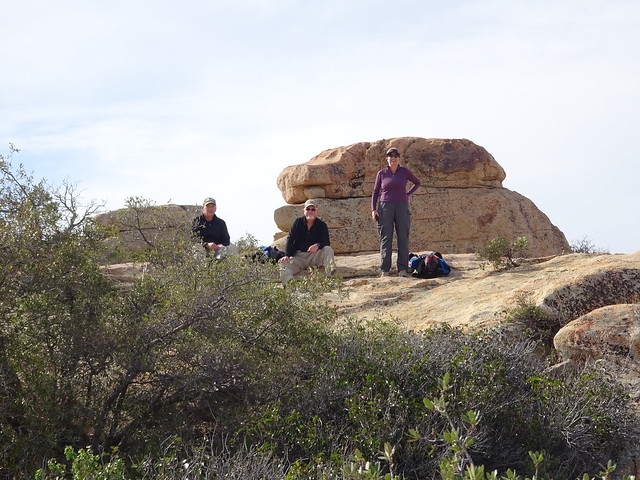 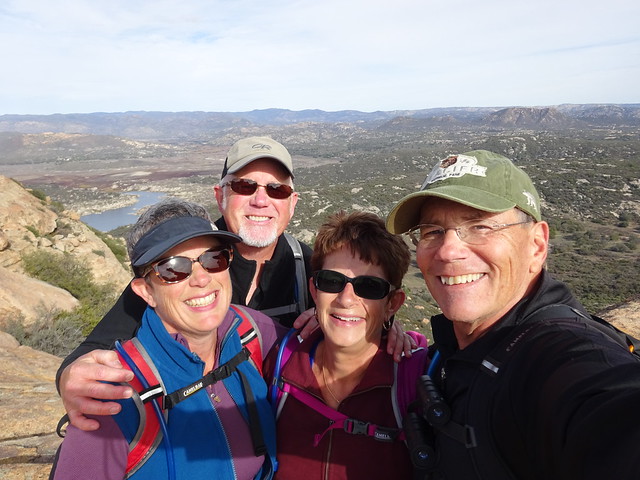 While searching for a plaque that was suppose to be on the butte, Hans found a Geocache canister hidden at the very top.  Some readers may be saying, “He found a what?”  A bit of information may clear things up for you.

Geocaching is an activity where people use a GPS (Global Positioning System) receiver  and other navigational techniques to hide and seek containers, called “geocaches” or “caches”, anywhere in the world.  A typical cache is a small waterproof container containing a logbook (with a pen or pencil).  The geocacher enters the date they found it and signs it with their established code name.  After signing the log, the cache must be placed back exactly where the person found it.  Since we were not “geocaching,” Hans just returned the container back where he found it. 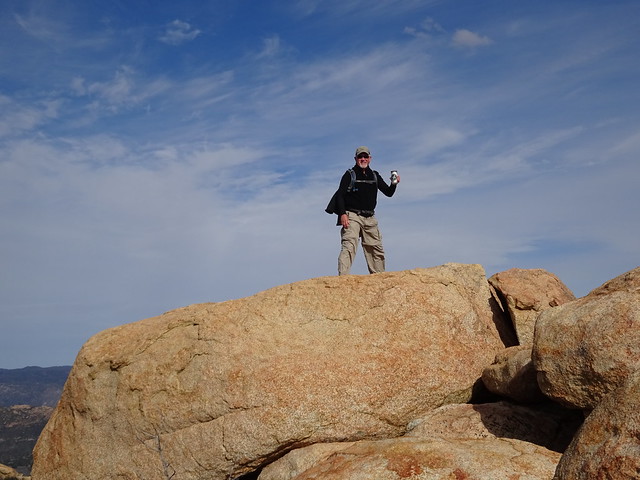 The hike back down provided some great vistas and great rock scrambling. 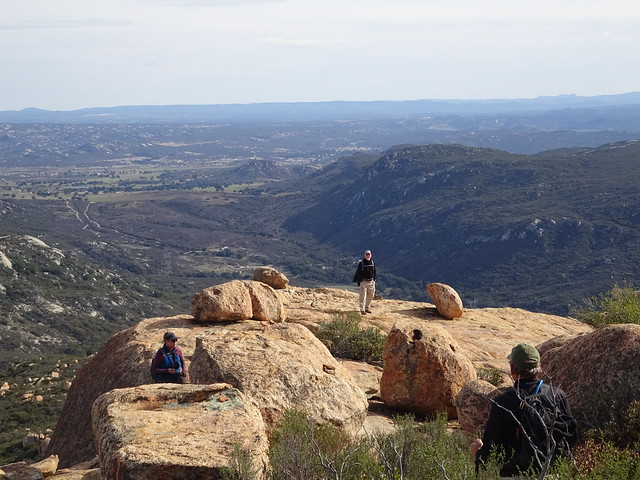 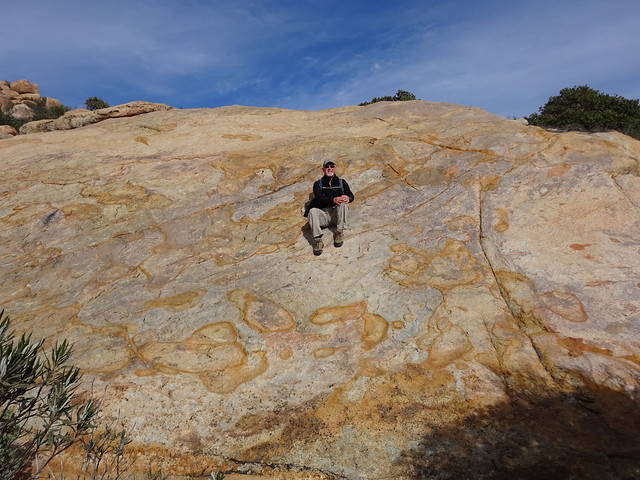 After descending back down to lake level we passed by an old foundation with a chimney that is still standing.  It made us wonder what was originally located there. 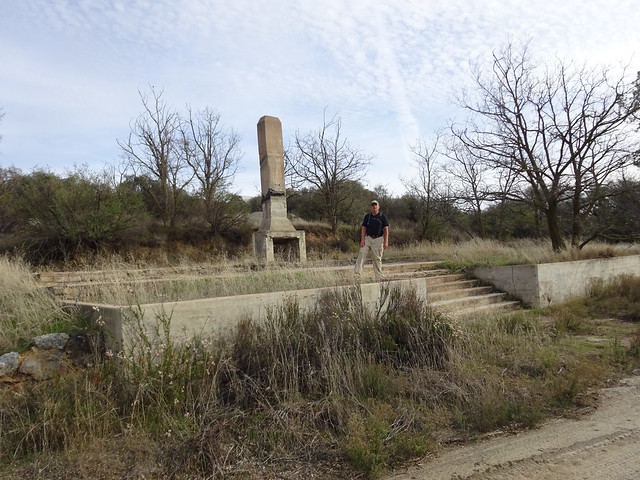 We continued on a dirt road along the lake for about 2 miles to get back to the trail head. On the way we passed through the Morena Lake Park and Campgrounds and came upon the Hatfield Plaque that sits near the entrance of the park. 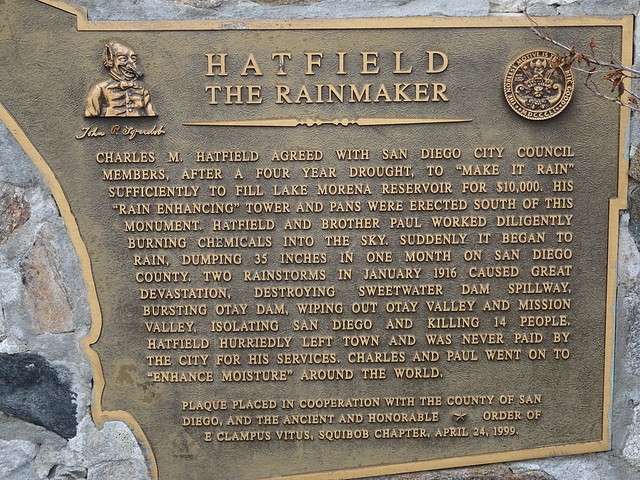 Hans and Lisa rate this as one of their top five in the San Diego area.  We think it is the best hike we have done in our two visits to San Diego.

We have a visitor from the east (i.e. our daughter, Jessica) arriving in a week, so we’ll spend the next few days checking out some things to do and see in the area during her visit. 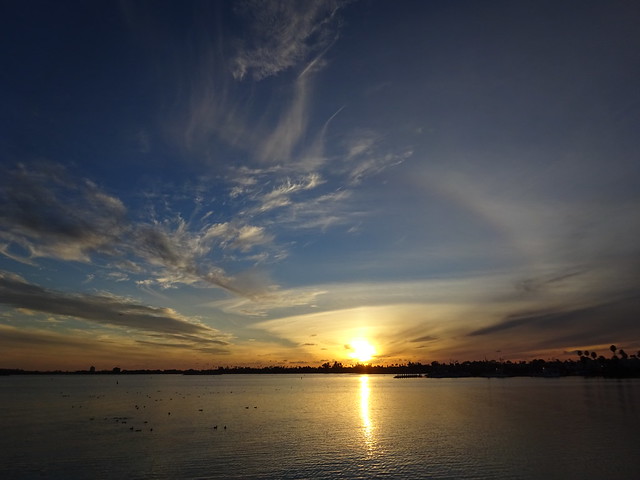