Months ago we made a reservation at Mission Bay RV Resort in San Diego for a month stay beginning in the middle of December.  With nothing planned until then we thought about heading to Yuma for a couple of weeks.  But when our son, Kevin, called and said he had a few days off and could fly out from Atlanta for a visit, we changed plans and headed for San Diego early.  Since Mission Bay limits your stay to a month we couldn’t go there early, so we decided to return to Santee Lakes Regional Park, where we had spent a month two years ago.  Santee is just east of San Diego and the campground is located along a number of small, man-made lakes.  The park is well-maintained and the sites are wide and long.  The only negative is that the sites are dirt and gravel and can be a problem when it rains. 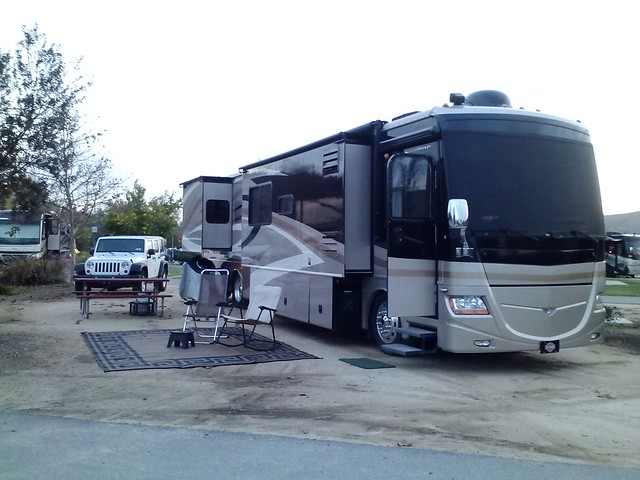 Our home in Santee Lakes

We picked Kevin up at the San Diego airport on Saturday and that evening enjoyed a delicious belated Thanksgiving dinner perfectly prepared by Chef Pam.  The next morning we headed west into the hills for a hike.  We drove out I-8 for about 20 miles then seven miles north on Rte. 79 to the Sweetwater River parking area.  That is the trailhead for the Airplane Monument/West Mesa Loop Trail near Cuyamaca Rancho State Park. 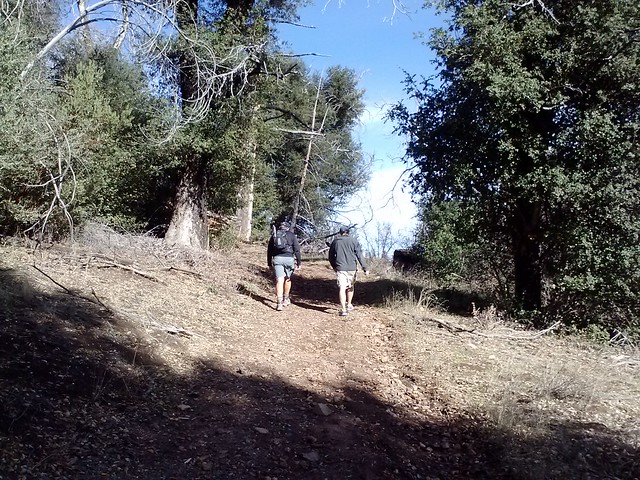 John and Kevin head up the trail

After hiking up into the hills for a few miles we came to the Airplane Monument, an old Liberty 12-cylinder aircraft engine mounted on stones. 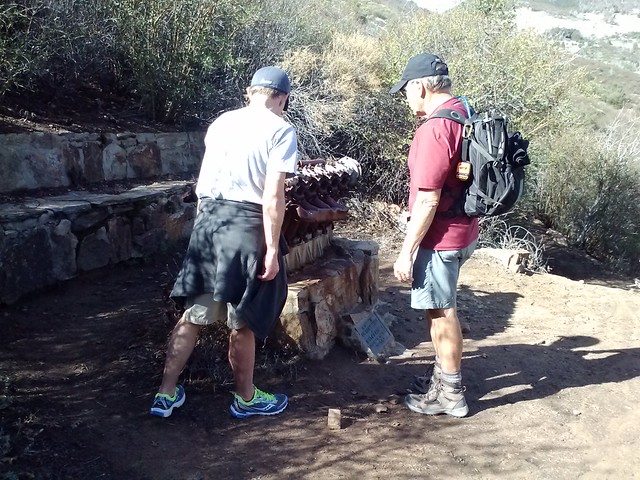 The engine is from a DH-4B biplane that crashed on December 7, 1922 (ironically our visit was on December 7th).  An Army pilot, First Lt. Charles Webber, volunteered to fly Col. Francis Marshall to Arizona from San Diego to conduct official military business in Fort Huachuca.  When the weather deteriorated, Webber turned back to San Diego.  Shortly after reversing his course, the plane experienced engine trouble, and without a radio to communicate their engine failure, Webber and Marshall crashed into the ridge below Japacha Peak.  Neither Webber nor Marshall survived.  Search-and-rescue teams failed to recover the men and their plane after months of searching.  Five months later, a local rancher by the name of George McCain found the burned remains along with the airplane wreckage.

The engine block of the DH-4B biplane was mounted as a memorial for the World War I veterans.  The memorial was dedicated in May 1923 and refurbished by Civilian Conservation Corps workers in 1934, who constructed the Airplane Monument Trail, and again in 1968 when the state parks improved the monument. 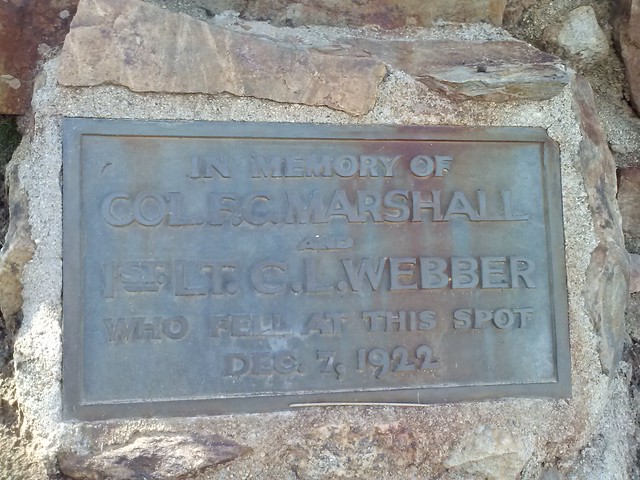 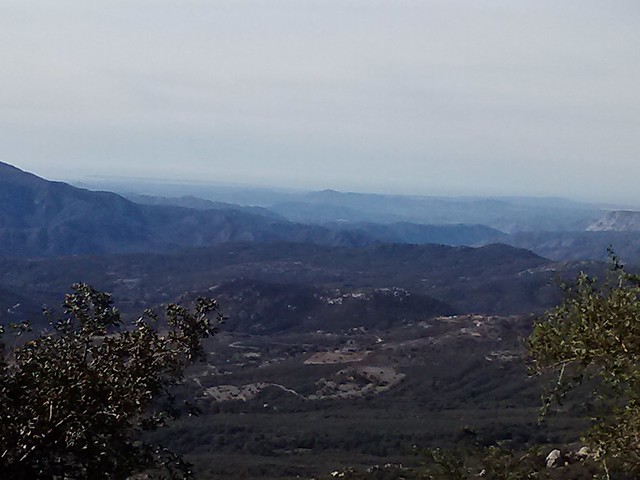 Looking west toward San Diego and the Pacific Ocean

As we crossed a ridge we were met by three hikers with riders on their backs.  Slick, Bandit, and Hoot stopped for a few minutes to allow their riders to talk with us. 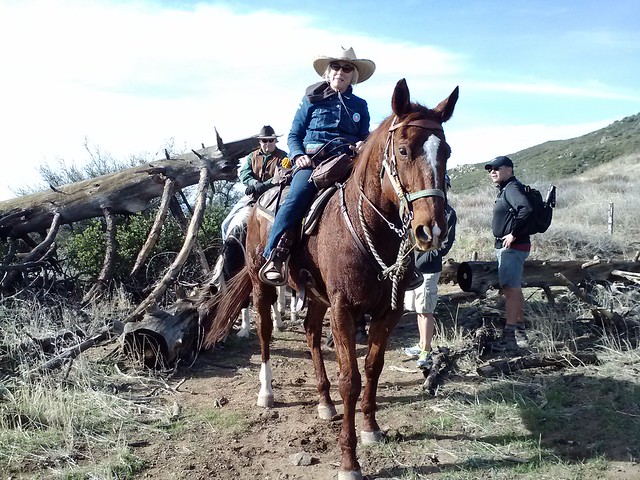 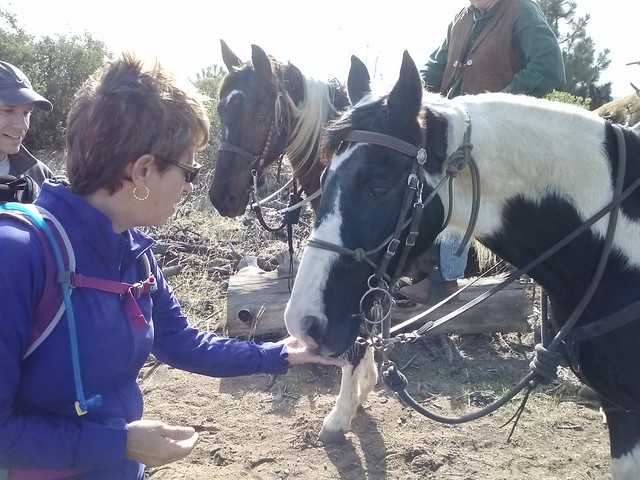 When there are no dogs around to feed, a horse will do!

Kevin stayed with us for two nights before boarding a flight back to Atlanta.  He flies airliners for a living, so a cross-country flight wasn’t very exciting.

Friends, Hans and Lisa, (Metamorphosis Road) are also staying in Santee Lakes, so the day after Kevin left we joined them on a hike up Iron Mountain.  We met Hans and Lisa during our stay in Santee Lakes two years ago and haven’t seen them for about a year and a half, so it was great to re-connect.  They are avid hikers and are from the San Diego area and always have some great hikes for us. 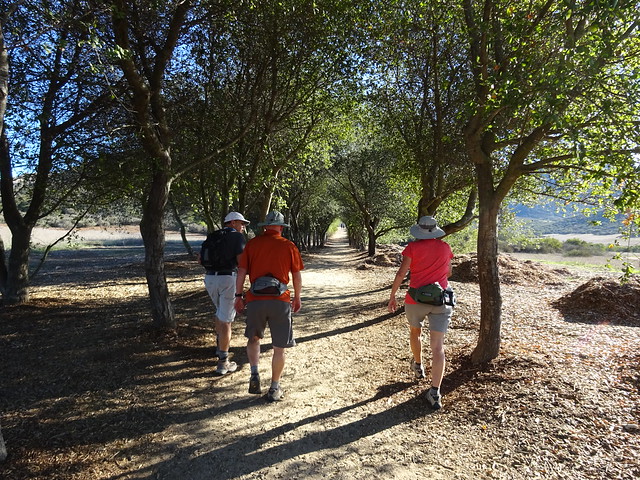 Not far up the trail we passed an open pasture where dogs undergo training to work as sheep dogs.  The dog pictured below needs a little more practice as when the trainer called out, the sheep returned to the barn but the dog stayed out in the field! 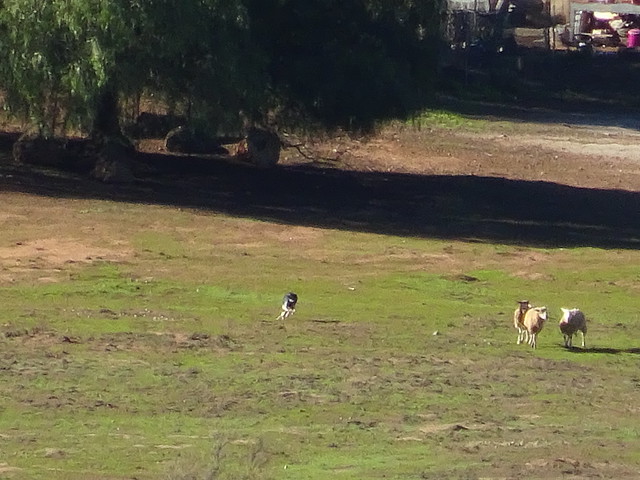 The main trail at Iron Mountain is a basic up and back hike.  We took an alternate loop trail that was a bit longer and gave us more elevation changes along with cool views to the east and west. 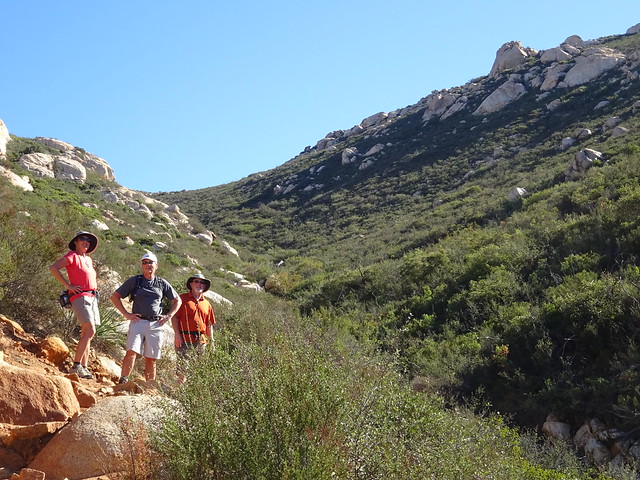 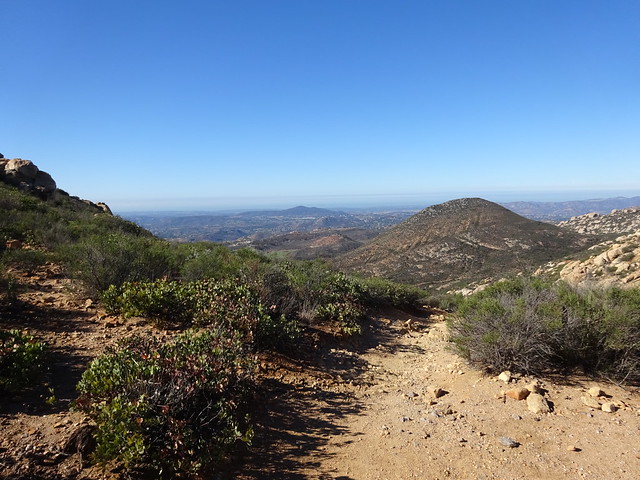 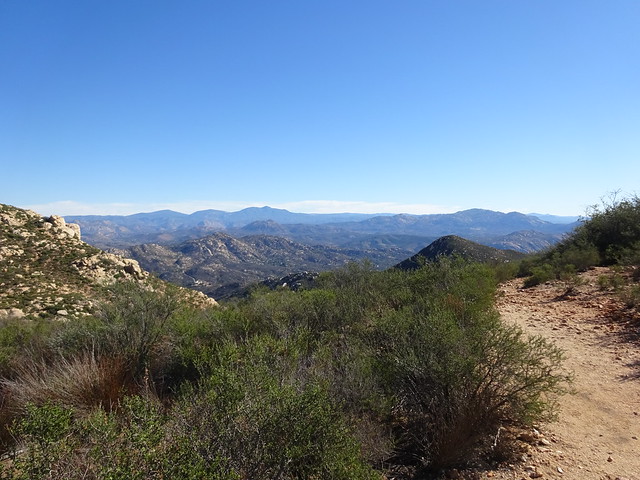 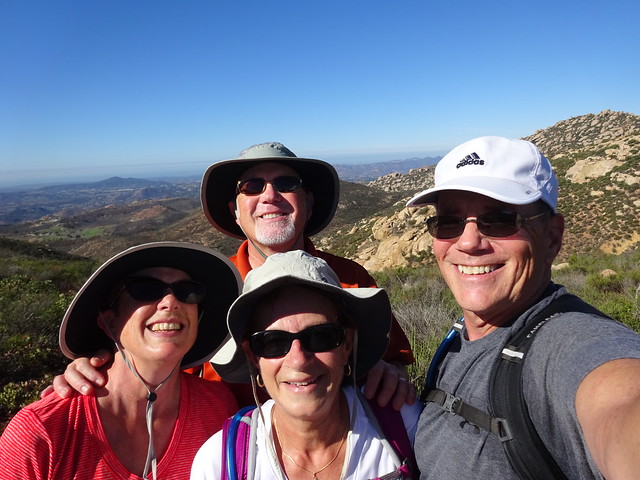 The next morning we decided to hike up the canyon north of the park.  The area is heavily used by mountain bikers, so many trails wind through the valley between the hills. 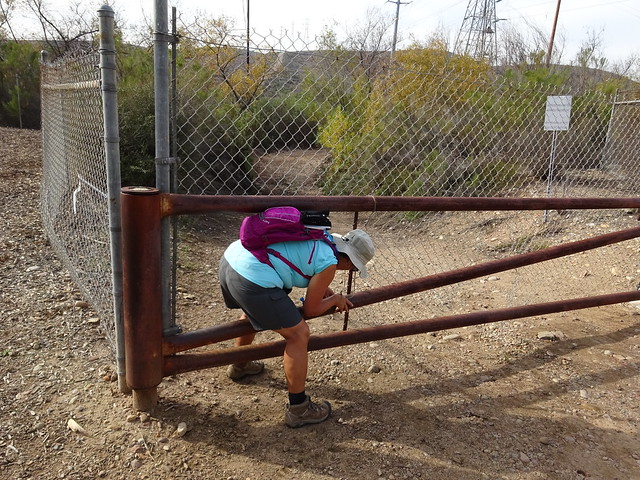 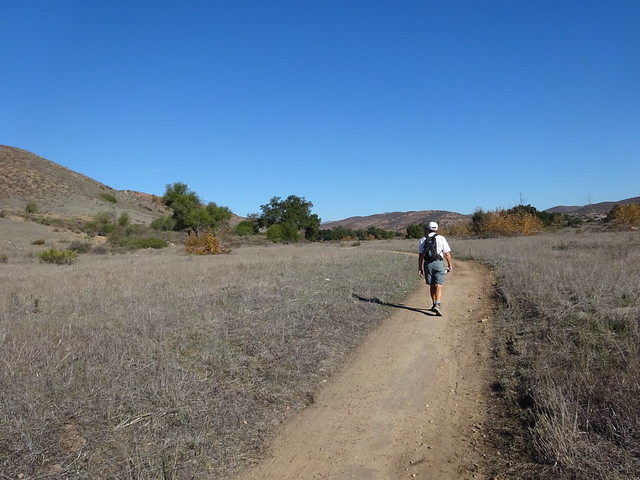 A few miles from the park, at a spot where many of the mountain bike trails intersect, someone is in the process of painting something on a large boulder.  At this point we couldn’t tell just what it would end up looking like. 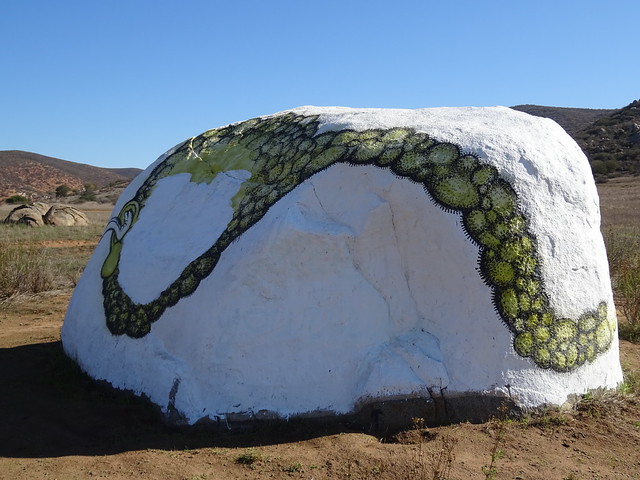 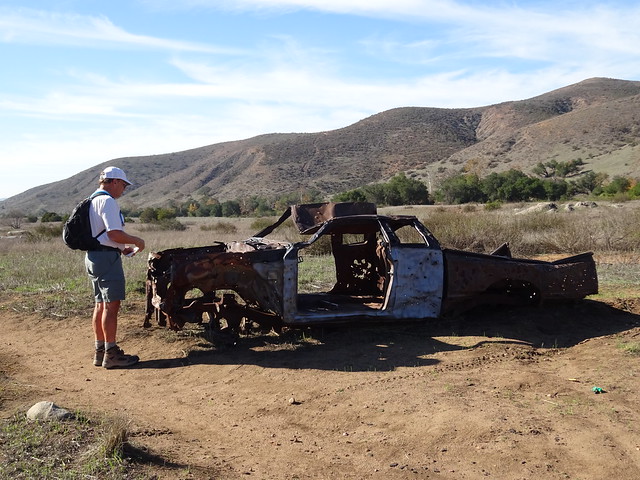 Looks like someone has overstayed their parking meter time

The main trail was pretty flat so we took a side trail up the hillside for a change of pace. 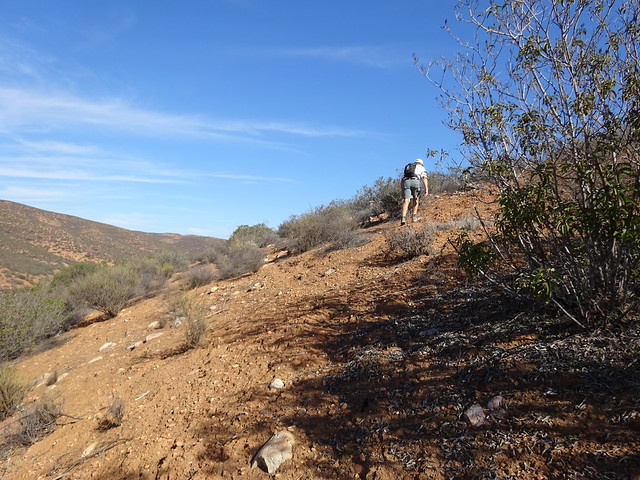 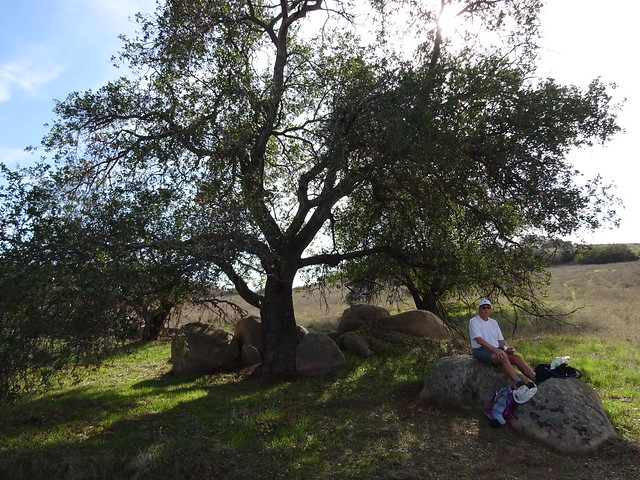 Lunch under one of the few trees along the trail 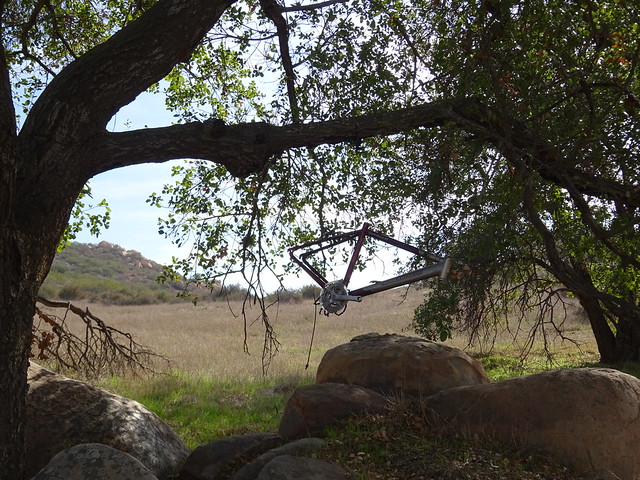 Someone didn’t enjoy their bike ride!

Lisa has told us that she thought that the area was used as a training area for helicopter pilots, so we were not surprised when a chopper did some landing maneuvers near us. 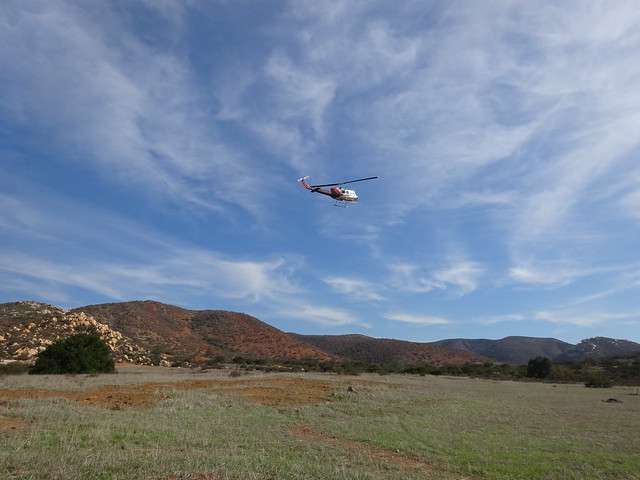 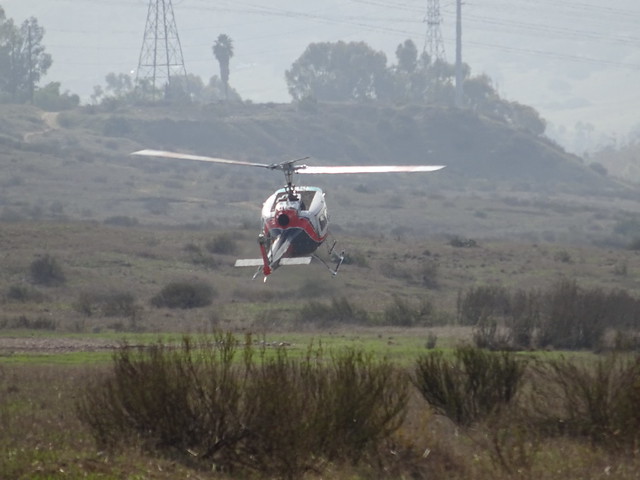 We will be in Santee Lakes for about a week before making the short move to Mission Bay where we will spend a month.  The possibility of another family visitor looms large for Christmas morning, barring a blizzard in southern Pennsylvania.

25 Responses to Return to San Diego