On Tuesday we drove north for about 40 miles to explore a Jeep road that goes through a scenic canyon.  But first we stopped for a brief visit at a classic mining ghost town.

The town of Rhyolite began in early 1905 as one of several mining camps that sprang up after a prospecting discovery in the surrounding hills.  During an ensuing gold rush, thousands of gold-seekers, developers, miners, and service providers flocked to the area.  A wealthy industrialist bought the nearby mine in 1906 and invested heavily in infrastructure, including piped water, electric lines and railroad transportation, that served the town as well as the mine.  By 1907, Rhyolite had electric lights, water mains, telephones, newspapers, a hospital, a school, an opera house, and a stock exchange.  It also had 50 saloons, 35 gambling tables, many brothels, 19 lodging houses, 16 restaurants, half a dozen barbers, a public bath house, and a weekly newspaper, the Rhyolite Herald.  Four daily stage coaches connected Rhyolite with Goldfield, 60 miles to the north.  Published estimates of the town’s peak population vary widely, but most sources generally place it in a range between 3,500 and 5,000 in 1907–08. 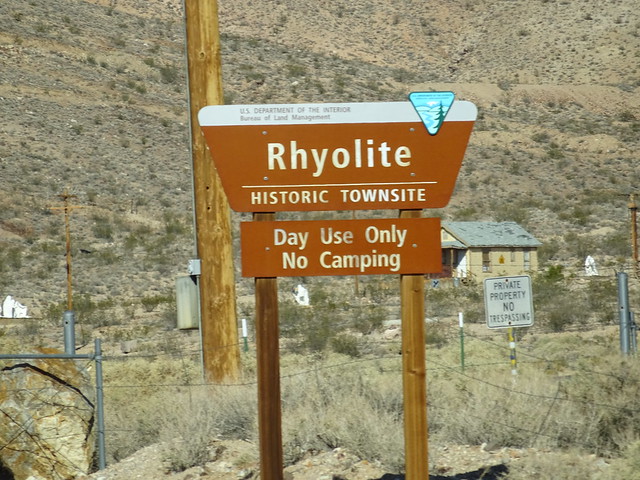 Rhyolite declined almost as rapidly as it rose.  After the richest ore was exhausted, production fell.  The 1906 San Francisco earthquake and the financial panic of 1907 made it more difficult to raise development capital.  In 1908, investors in the mine, concerned that it was overvalued, ordered an independent study.  When the study’s findings proved unfavorable, the company’s stock value crashed, further restricting funding.  By the end of 1910, the mine was operating at a loss, and it closed in 1911.  By this time, many out-of-work miners had moved elsewhere, and Rhyolite’s population dropped well below 1,000.  By 1920, it was close to zero. 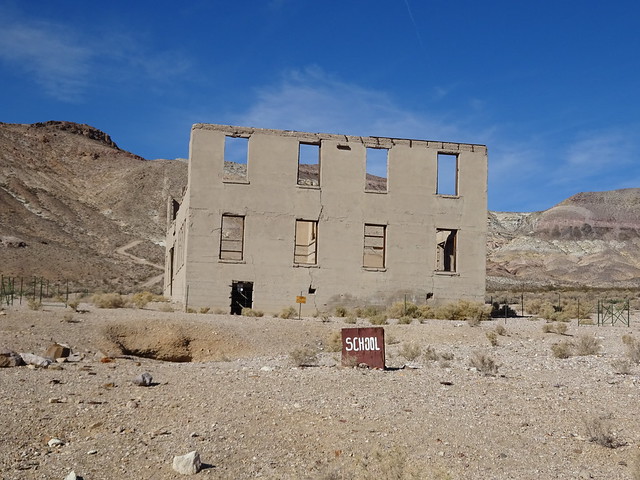 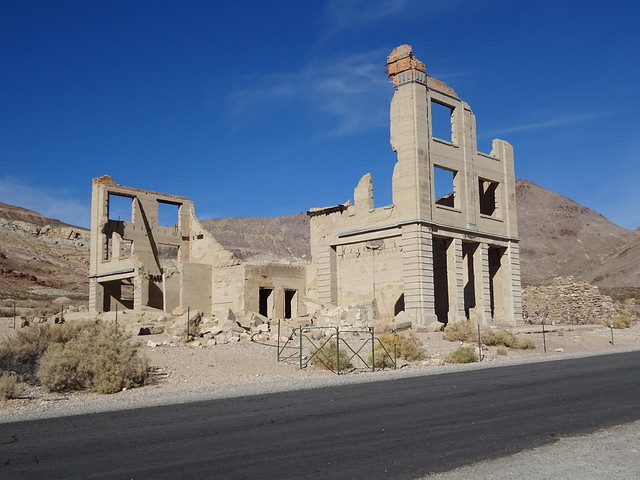 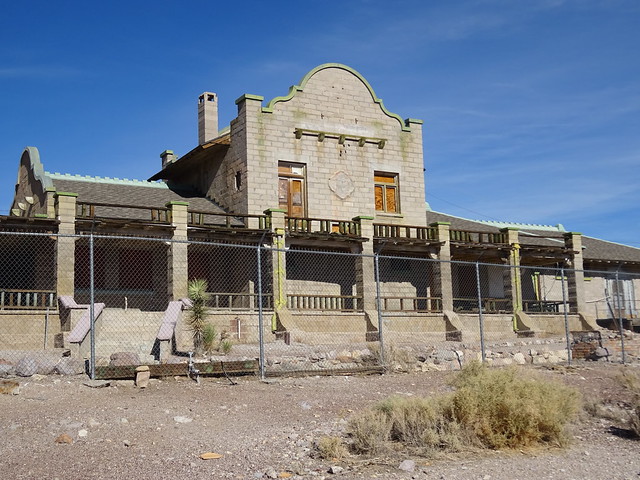 The best maintained structure in the town today is Mr. Kelly’s Bottle House.  The house was built in 1905 using the many bottles available from the 53 saloons located in Rhyolite.  Mr. Kelly never did live in the house.  He raffled it off with tickets selling for $5.00.  The Bennet family won the drawing and lived in the Bottle House until 1914. 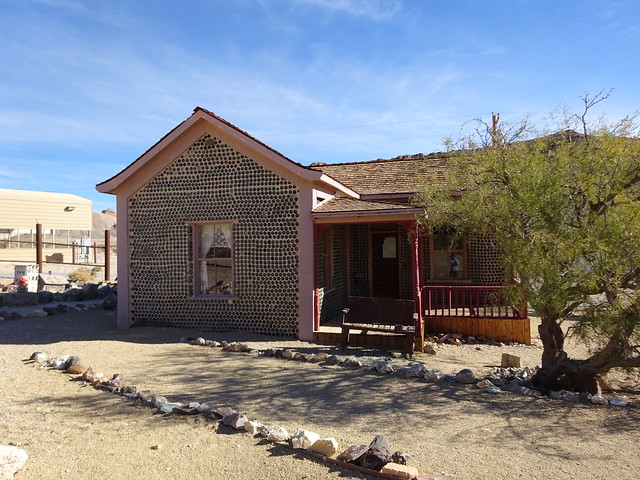 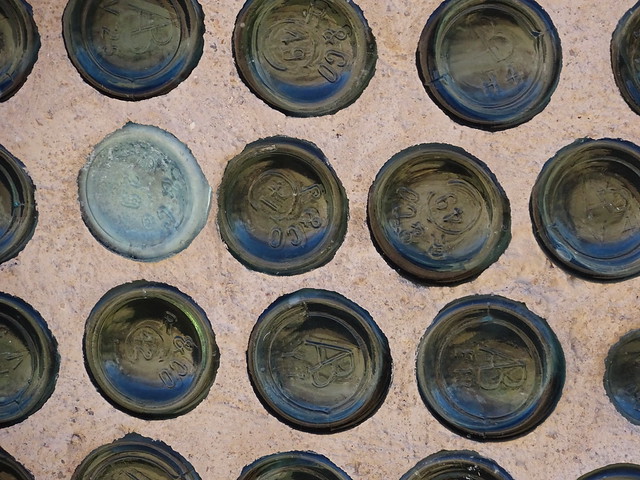 Just outside of Rhyolite is the Goldwell Open Air Museum.  The museum was closed but we enjoyed the sculptures around the small building by Belgian artist Albert Szukalski.  Szukalski wrapped live models in fabric soaked in wet plaster and posed them.  When the plaster set, the model was slipped out leaving the rigid shroud.  The shroud was then coated with fiberglass making it imperious to weather. 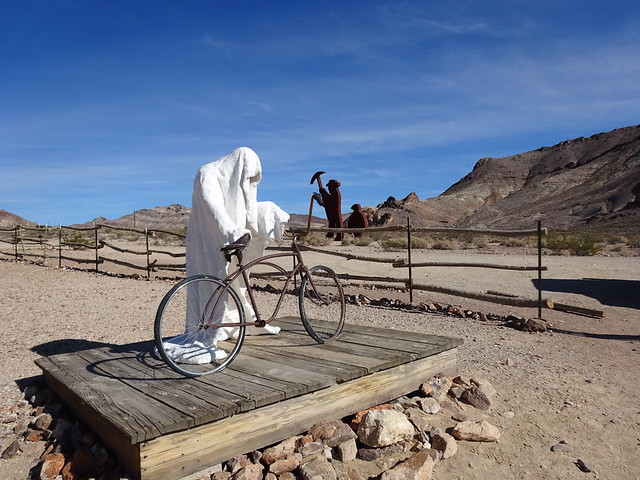 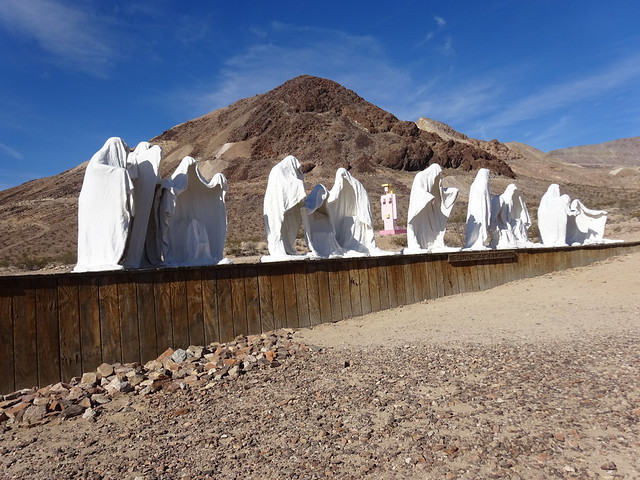 After our visit to Rhyolite, we drove back down the highway a few miles and turned on to a narrow, dirt road leading to Titus Canyon.  This 27 mile long road is one way for 24 miles as it winds up through the Grapevine Mountains before ending with a drive through narrow Titus Canyon. 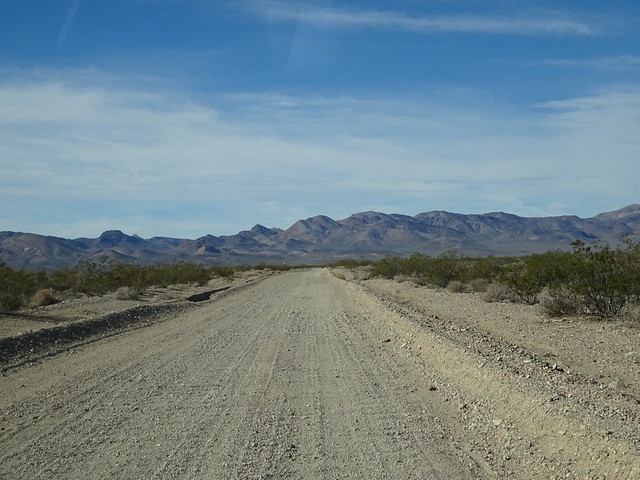 Heading to the mountains in the distance 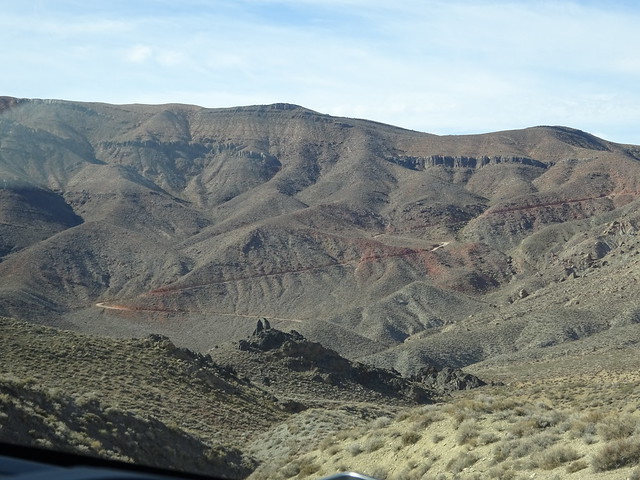 The road through the mountains 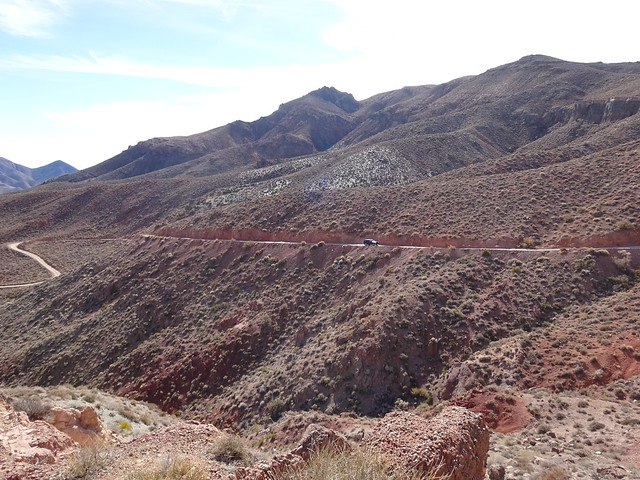 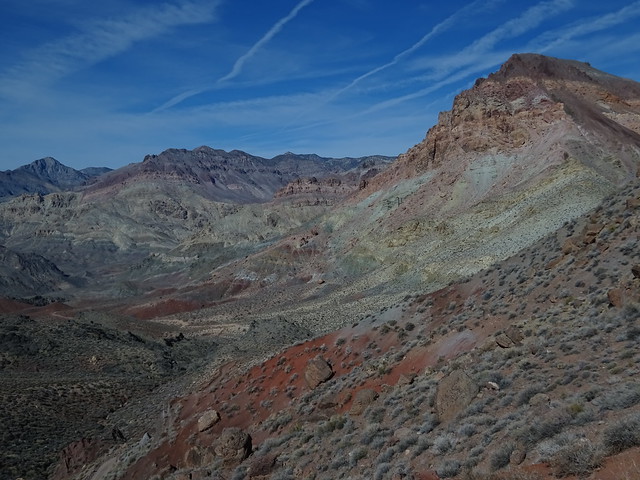 About half way down the road you come to another ghost town, the remains of the town of Leadfield. 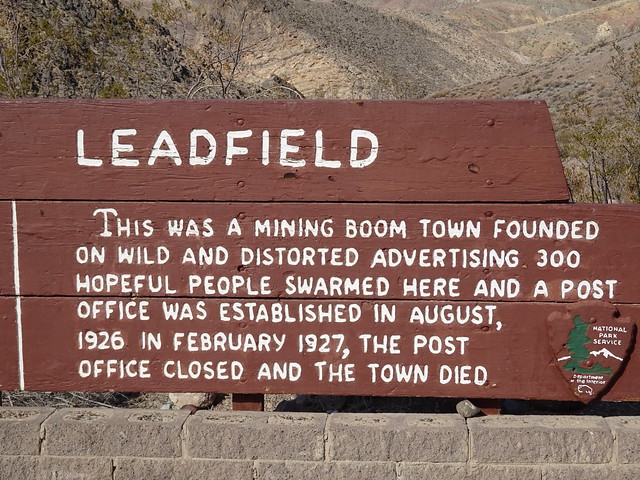 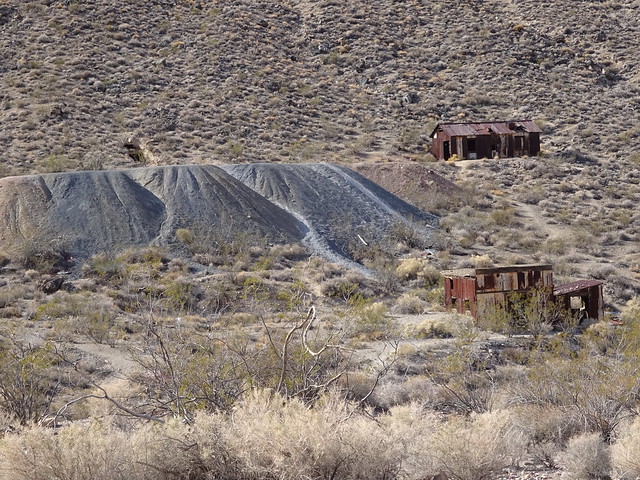 Below Leadfield the road goes into the narrow Titus Canyon.  We removed the roof panels of the Jeep to better enjoy the views above us. 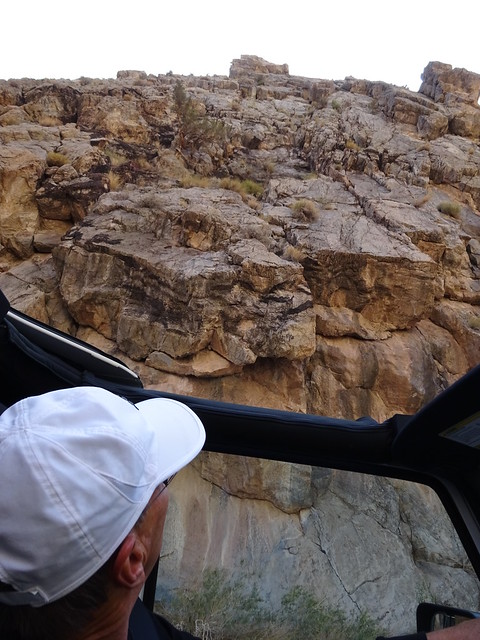 There was a small spring along the road where early inhabitants in the area came to hunt the Big Horn Sheep that came to drink.  They left their artwork along some of the large rocks. 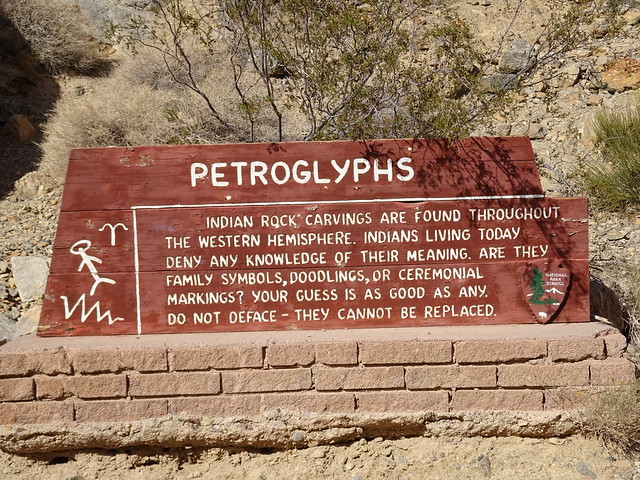 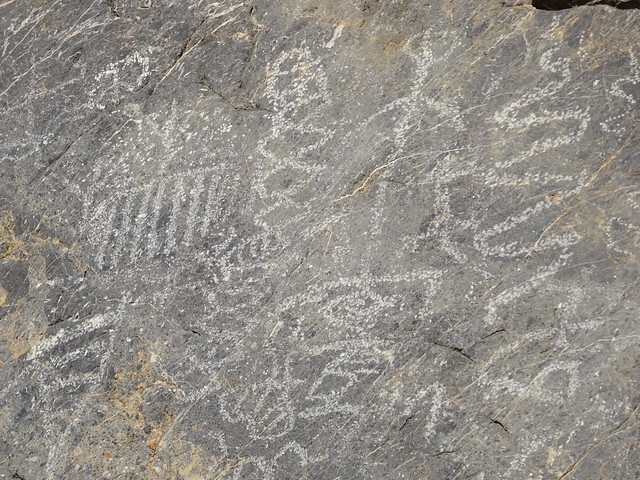 The final two miles of the one-way section of the road goes through a beautiful canyon with towering walls above us.  A slot for cars! 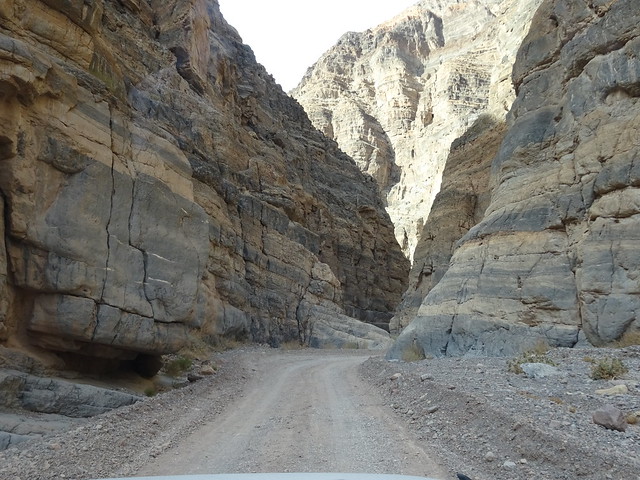 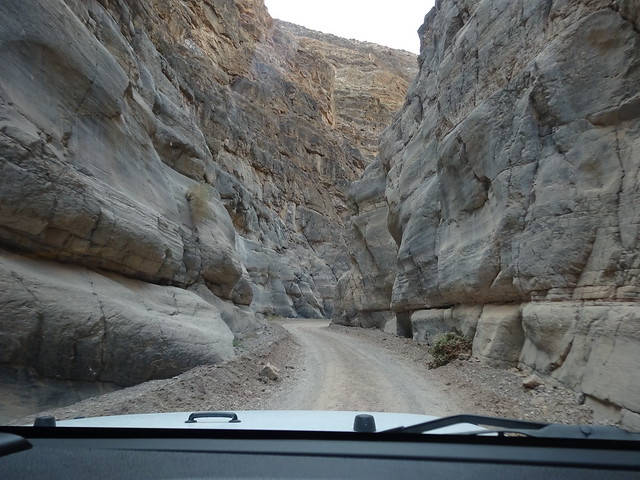 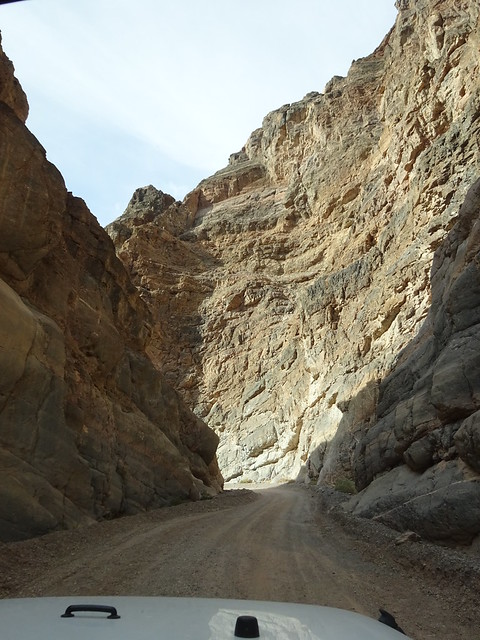 The one-way part of the Titus Canyon Road ends in a parking area where there is a trailhead to Fall Canyon.  The remaining three miles is a two way road, allowing vehicles that are not high clearance to get to the trailhead without coming down through Titus Canyon.  A display sign there has a picture of a 1920s-era car with the driver posing for the camera while in the canyon. 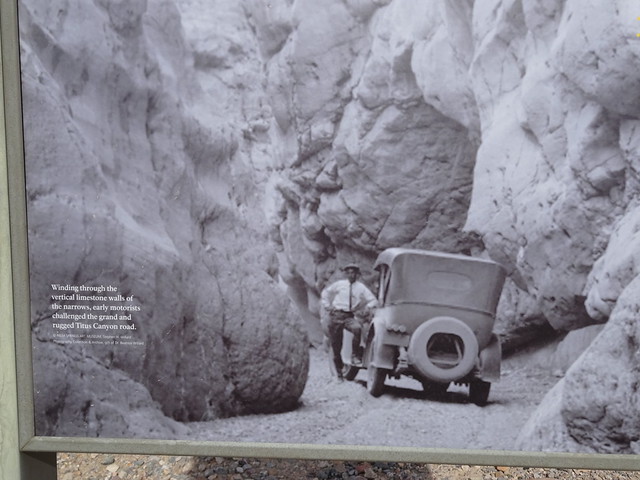 At the trailhead we parked the Jeep, grabbed our packs, and headed up the trail to explore Fall Canyon.  This three and a half  mile (one way) hike goes up a canyon ending at a steep, dry waterfall.  It was a challenging hike as the floor of the canyon is all loose rock, making footing unstable while constantly climbing.  But we enjoyed the colors of the rocks along the walls of the canyon soaring above us. 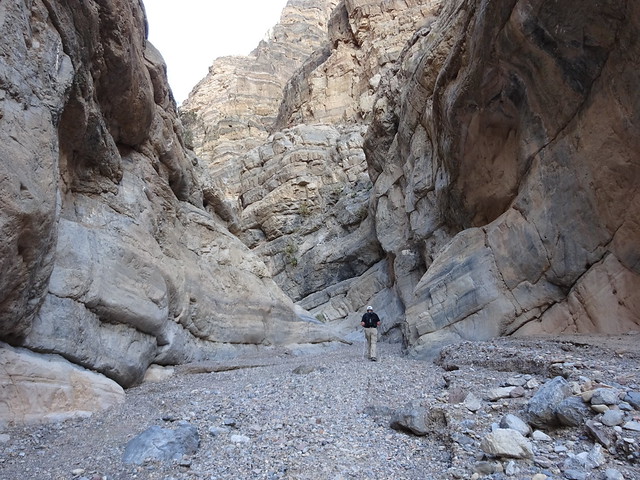 We had to hustle a bit to get out of the canyon before dark.  The sun is setting here at around 4:40 PM and, since there are no buildings within many miles, it gets really dark very quickly.  But we made it out with ease, ending a long but exciting day.

Our time here in Death Valley  is coming down to a final couple of days, but we still have a couple of adventures planned.  More on those later . . .