Exploring in the Jeep

Friends, Steve and Joan (FOSJ), are spending the winter in the nearby Lake Mead Recreation Area serving as volunteers.  The main part of their assignment is to drive a park vehicle down the many, many back roads in this huge area and check on road conditions (the infrequent rains often wash out parts of the roads), placement of guide signs, and any misuse of the park.  We have shared dinner with them a few times during our stay here and recently they told us about two interesting roads nearby in Arizona that lead down to the Colorado River.  So twice this week we spent some time 4-wheeling in the desert.

The two roads (designated 61 and 62 on park maps) are about two miles apart and are accessed off of US-93, about ten miles south of Hoover Dam.  After turning off the nicely paved four lane Rte. 93 you immediately enter a narrow dirt road that often isn’t even really a road, but a path down a dry wash.  We’ve driven a number of back roads here that require a high clearance vehicle but these are the first where you definitely need four wheel drive, as much of the time you are in very loose soft sand.  If you take a two wheel drive vehicle down here bring plenty to eat and drink while you wait for assistance! 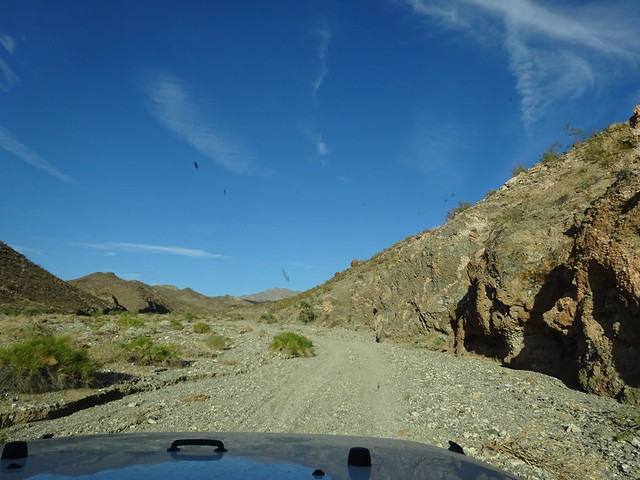 The first day we took the road designated as 61.  This was the easier of the two roads and did not require too much time in four wheel drive.  About two miles into the drive a cloud of dust suddenly appeared about fifty yards in front of us.  A large heard of Big Horn Sheep had suddenly entered the wash, running down the steep wall of the wash. 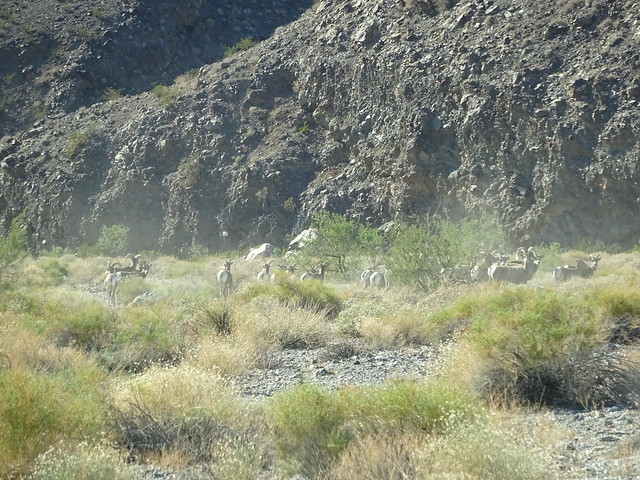 From the look on their faces they seemed as startled to see us as we were to see them. (OK, maybe you can’t read the emotions on the face of a sheep, but they did stare at us!) 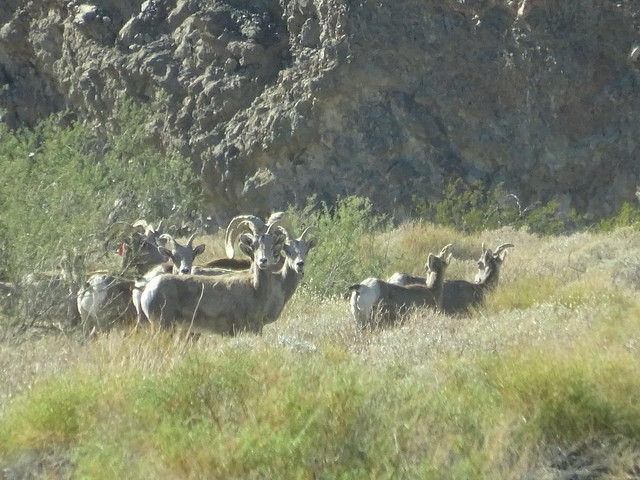 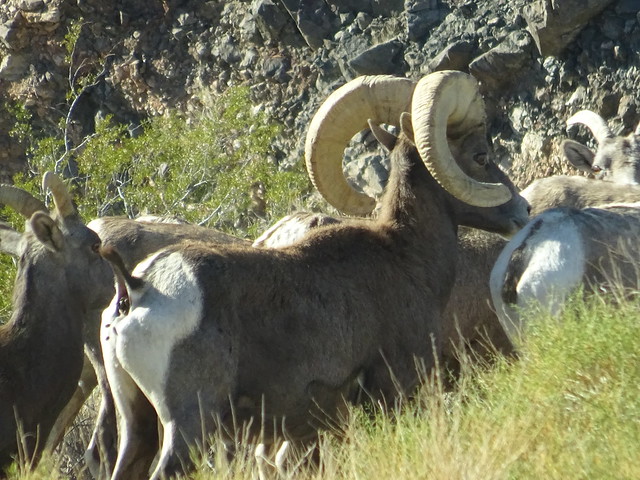 We sat still for quite a few minutes while the sheep enjoyed a snack.  When they finally moved off the road, we continued on our way. 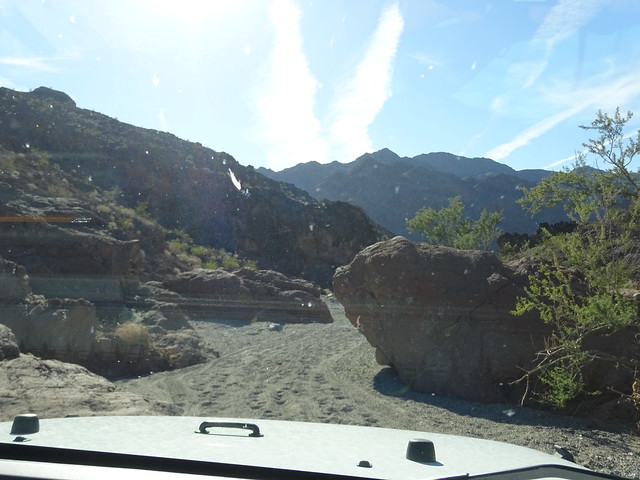 Sorry, bugs on the windshield

After four miles, we came to the end of the road (literally).  From there it is a half mile hike down to the Colorado River. 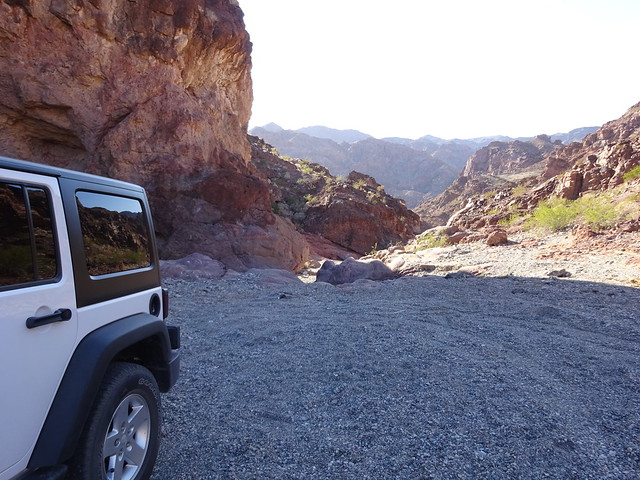 The hike has some interesting views as you make your way down the wash. 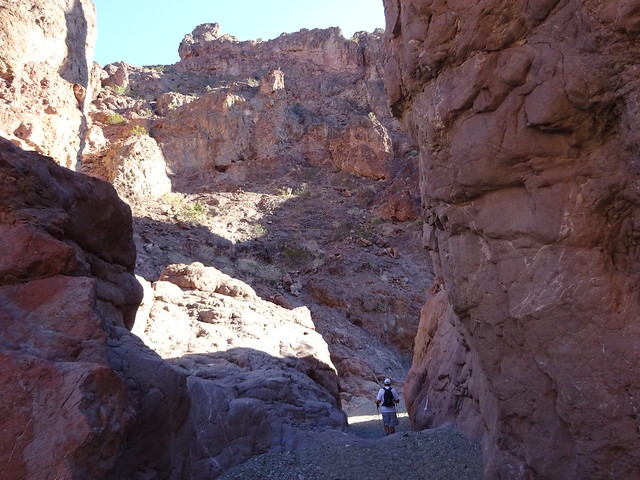 At the end of the wash you are rewarded with some beautiful views of the Colorado River.  The water south of the Hoover Dam is technically part of Lake Mohave, a reservoir created by the Davis Dam near Laughlin, NV, but it looks more river than lake to us.  Before the dams tamed the river, this area was filled with fast flowing rapids, so we guess the “lake” designation is appropriate. 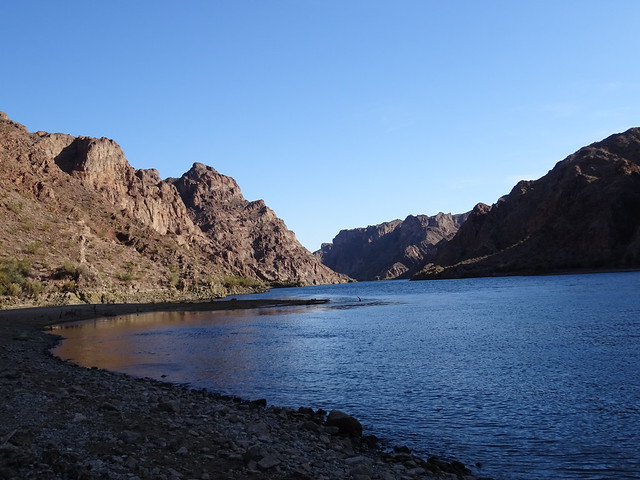 After a snack at the river we headed back up the wash to the Jeep. 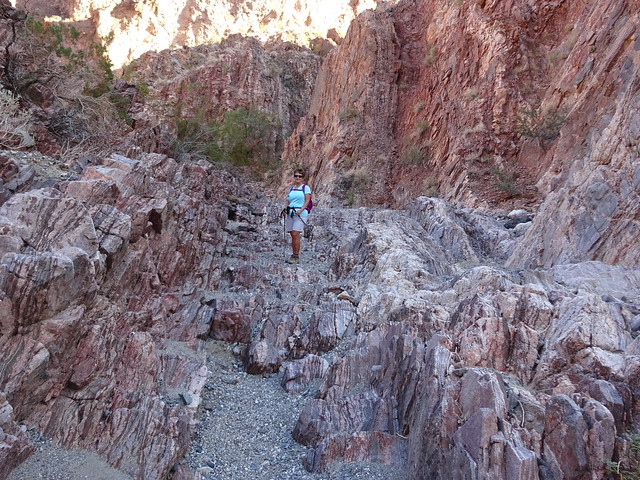 We were a bit surprised to find our friends still enjoying a snack along the road.  Again, we sat for a while until they decided to move to greener pastures and let us through. 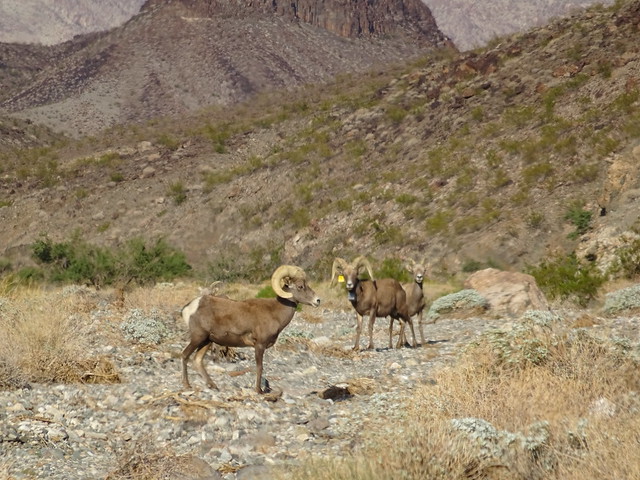 The next day we drove back into Arizona to check out the second of the two roads.  As we said, this one required the use of four wheel drive for over half the time due to the deep sand. 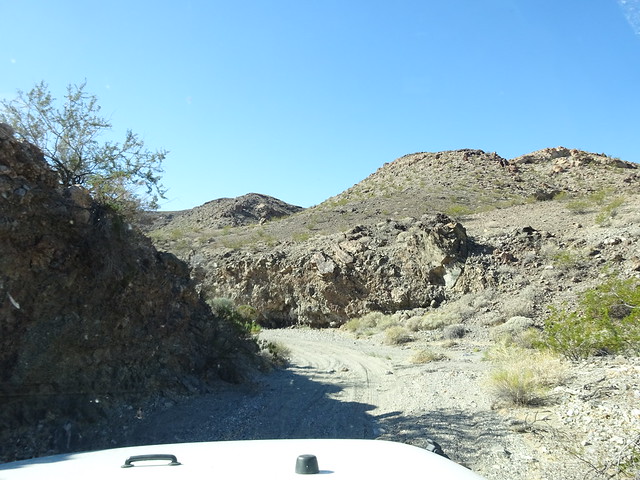 We drive the four miles to the end of the road where we found a sign (thanks Steve and Joan) telling us it was .8 to an old ranger station.  While it is a pretty easy hike, the first part requires a bit of scrambling in two adjacent spots. 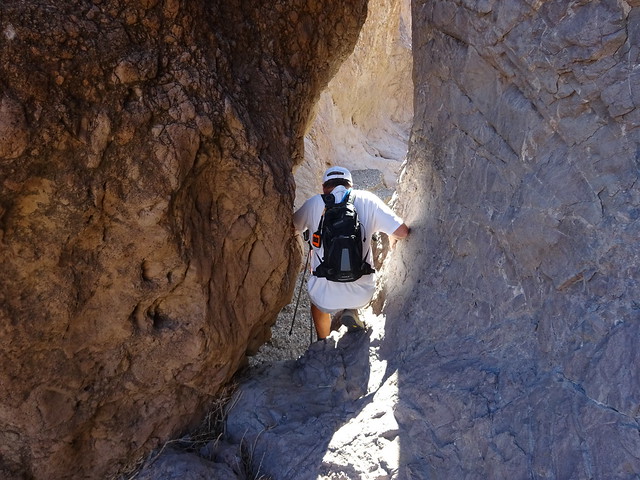 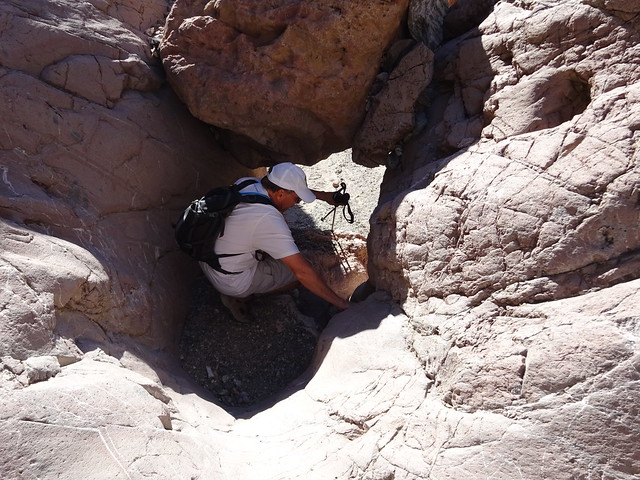 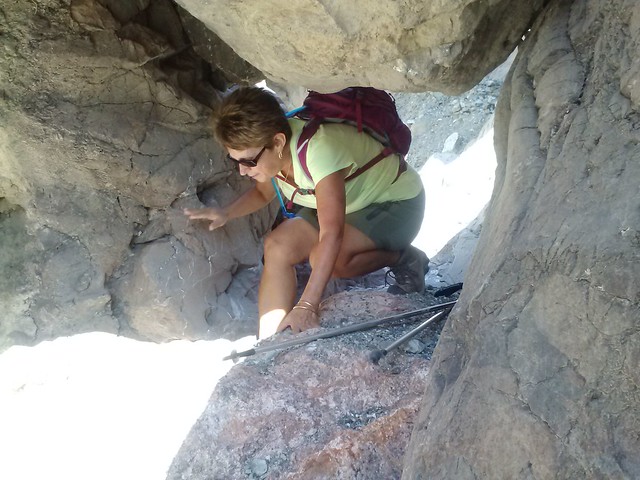 Once through those two spots, it is an easy walk to the river (lake?).  At the river there is a trail that runs up the north side of the wash leading to the remains of two buildings on the bluff overlooking the water. 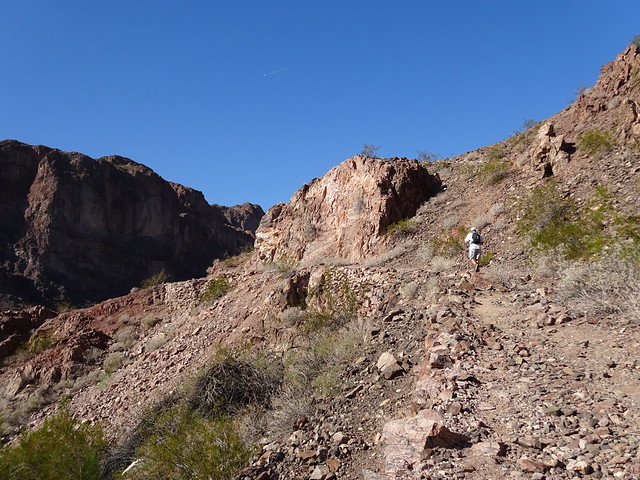 Hiking up to the building remains 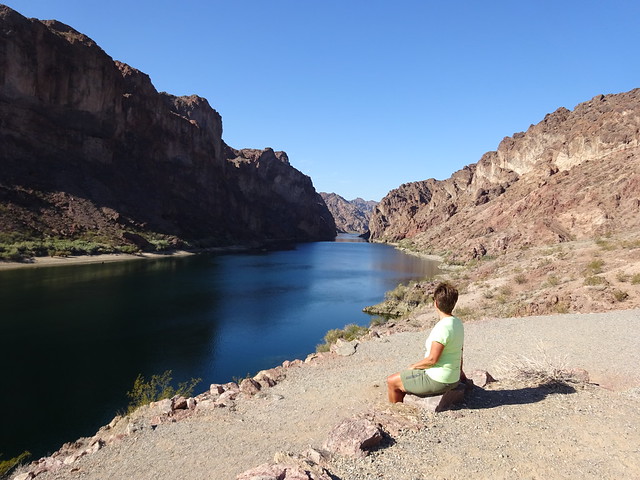 The two foundations are all that remains of a Gauging Station built there around the time of the construction of the Hoover Dam.  The station was built to provide data on the depth and flow of water in the Colorado River.  Pictures on a display board at the site show the two buildings from that time period. 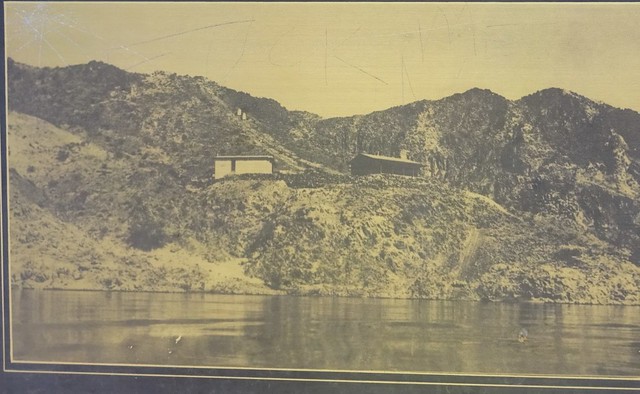 River view of the two buildings

In the picture below, the building on the upper left was the residence for the gauger, while the one on the lower right was a garage. 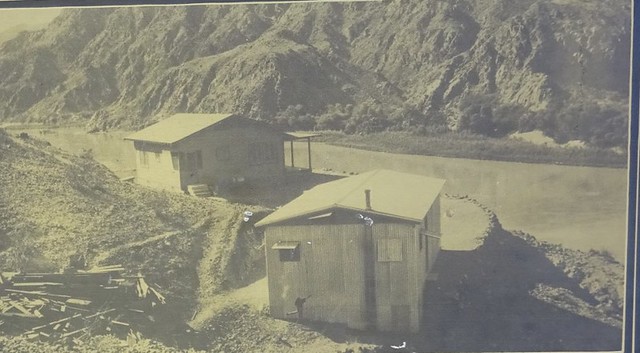 The buildings have been removed, leaving just the foundations as evidence of their existence. 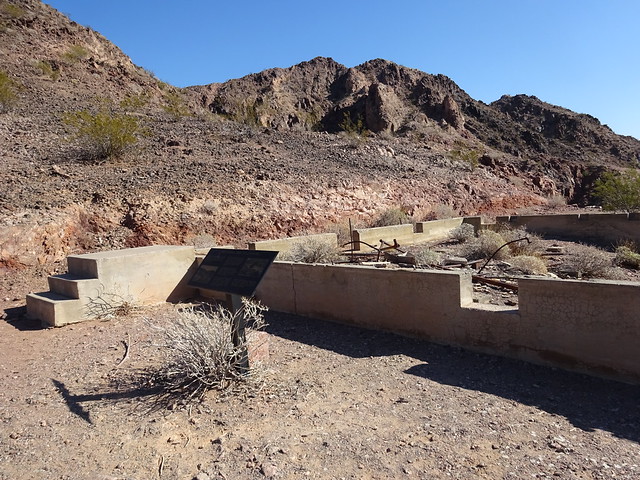 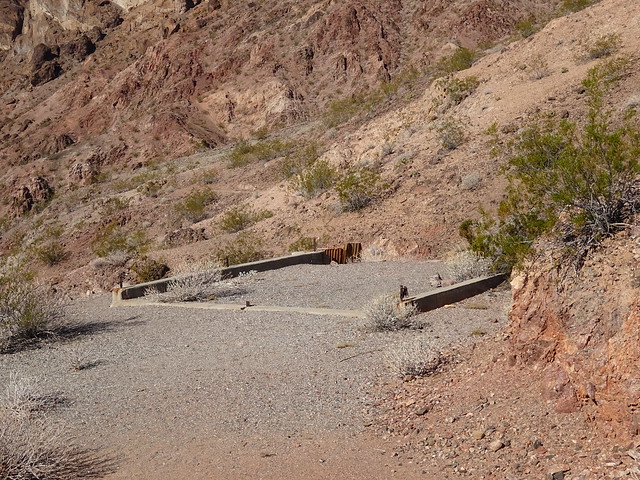 Looking up river you can see the remains of the actual facilities used by the gauger to measure the river.  In the picture below, red arrows show structures built into the canyon walls on each side of the water.  On the right is the remains of a catwalk along the canyon.  Each day the gauger would hike from the residence to a cable attached to the catwalk.  He would use a little tram on the cable to get from the trail to the catwalk, then use another cable stretched across the river to ferry himself to the structure on the opposing wall of the canyon

The gauging station itself is a small, square metal room hung on the vertical cliff about forty to fifty feet above the river surface.  Beneath it a corrugated pipe about four feet in diameter extends down into the river.  The gauger would use this pipe to measure water depth. 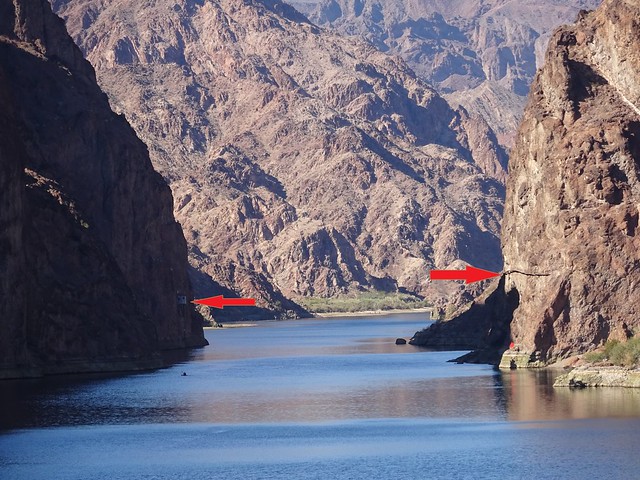 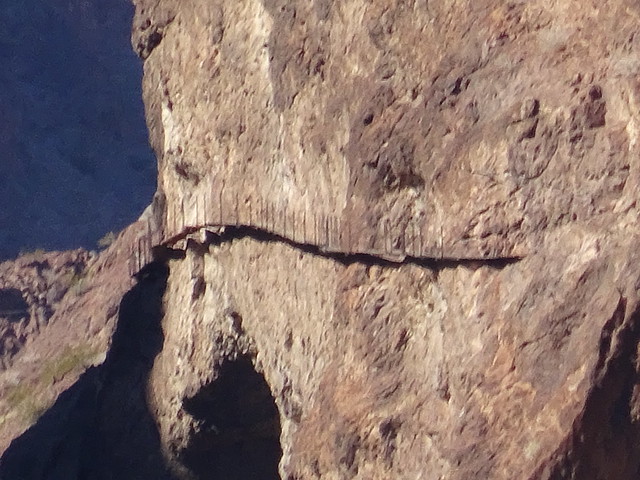 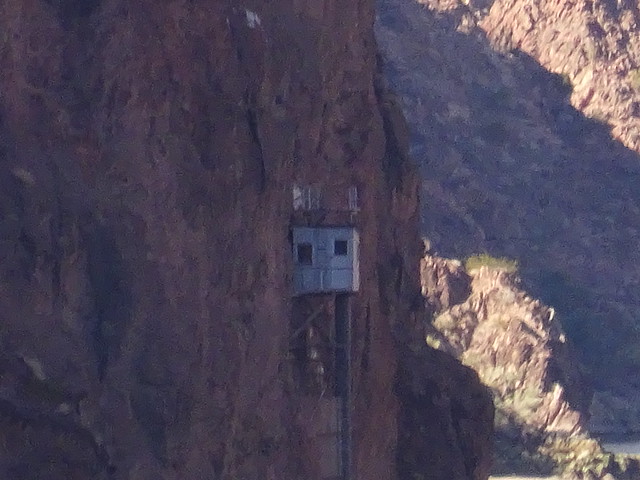 After watching kayaks on the water while enjoying a snack at the remains, we headed back up the wash to the Jeep. 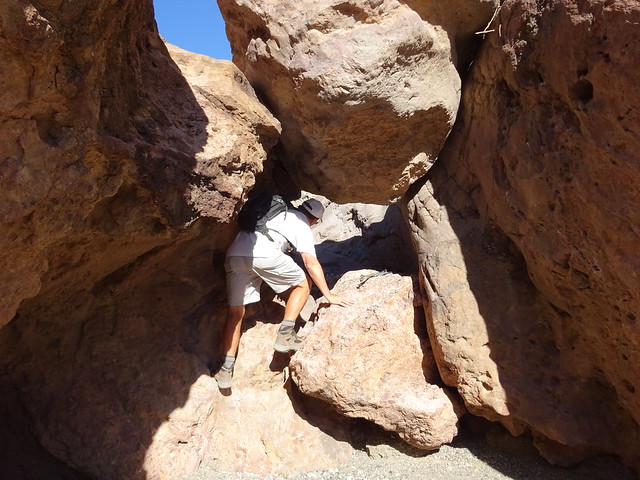 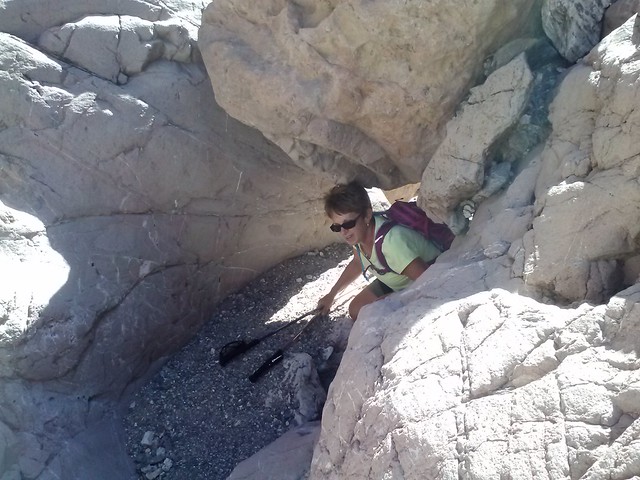 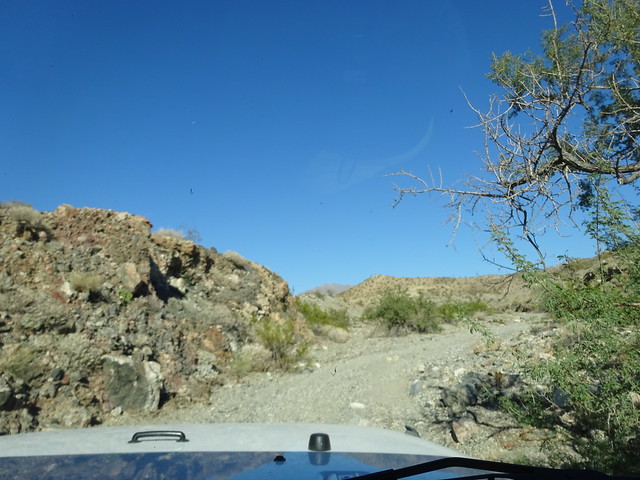 Many thanks to Steve and Joan for telling us about these two adventures.  The Jeep really enjoyed the work-out and we loved the short hikes down to the water.  And the Gauging Station was very interesting and satisfied one member of the group’s need to explore history.

We are now about to end our stay in Boulder City.  When we arrived we intended to stay for two weeks, but found so much to do that we extended our stay twice.  Even with the extensions we have barely scratched the surface in exploring the area.  But it is time to move on and Death Valley has finally cooled down a bit and is calling our names.

30 Responses to Exploring in the Jeep