A Second Visit to the Bowl of Fire

Posted on November 9, 2014 by placestheygo

Last weekend we hiked into an area along Lake Mead called the Bowl of Fire.  We had a great time exploring the area with two other couples: Leigh & Brian and Becky & Andrew.  But this is too large an area to cover in one hike, so later in the week we drove back to the same spot to do some more exploring. 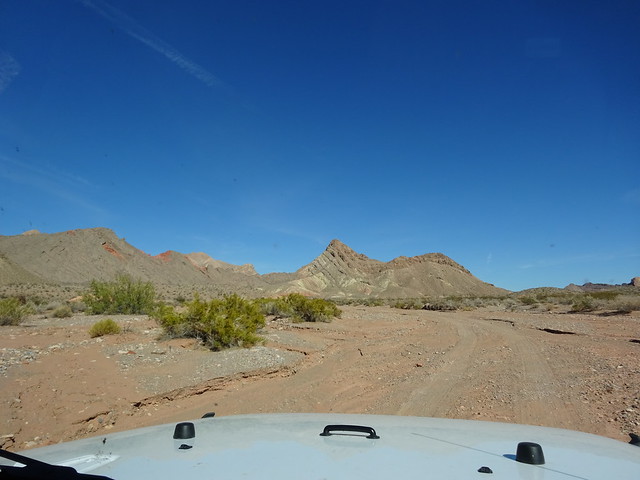 Driving the Callville Wash Road to the trailhead

A short distance up the wash we came upon a boulder blocking the trail.  Not to be denied, the nimble hiker quickly grabbed the stone, hoisted it in the air and . . . 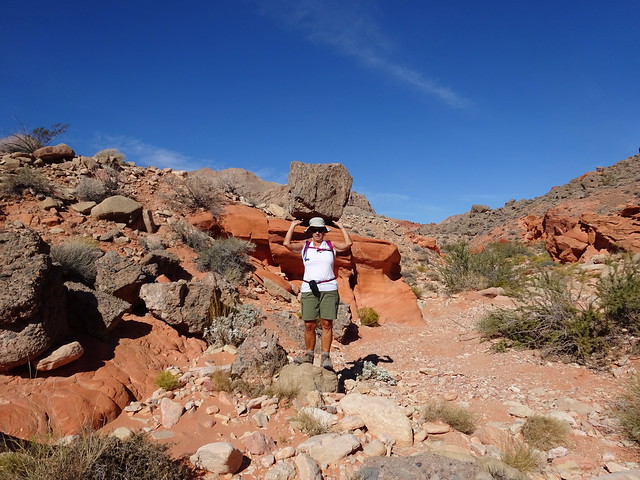 . . . deposited it on a nearby rock pile.  Thanks to her effort we were able to continue our journey up the wash. 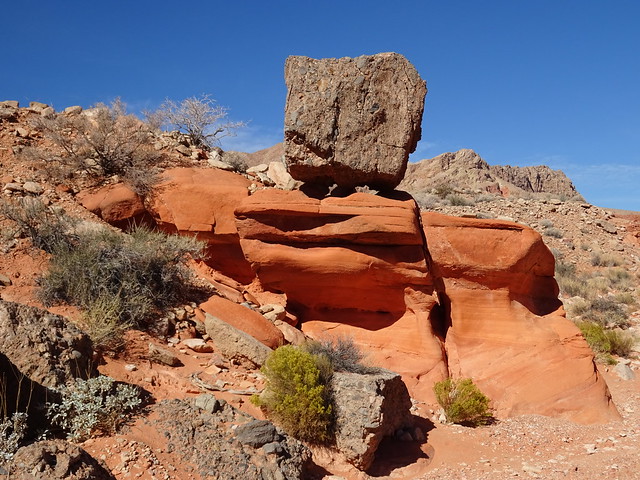 This is a hike where there really is no prescribed trail.  You basically chose a path in the wash and follow it.  Spot something interesting above you?  Climb up the sandstone and explore.  There are beautiful rock formations all around you.  So for the rest of this blog let’s look at some of the rocks.  Tired of pictures of rocks?  Then you may want to stop here and check out something else, like here. 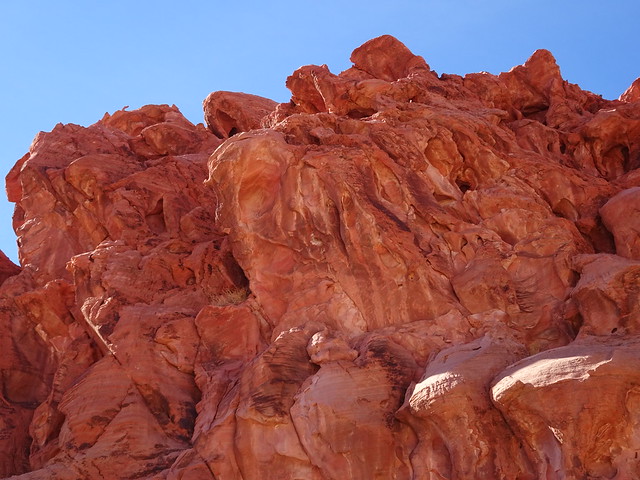 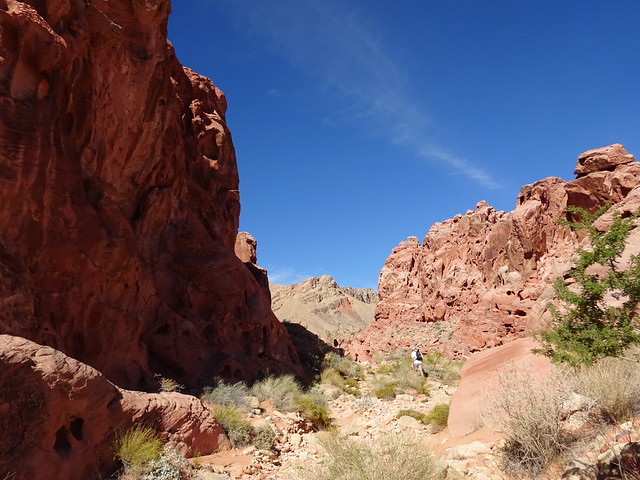 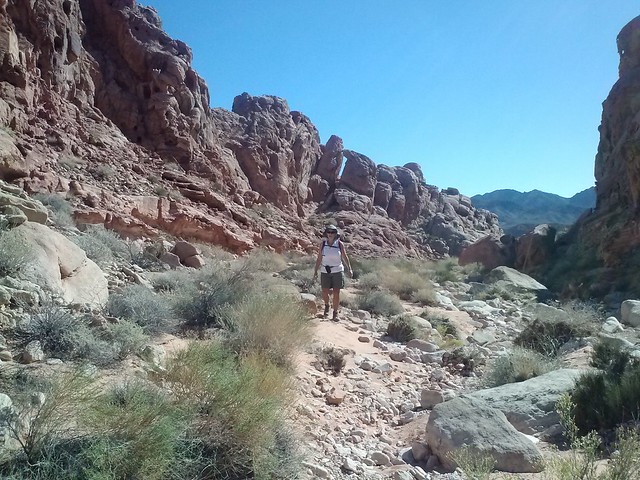 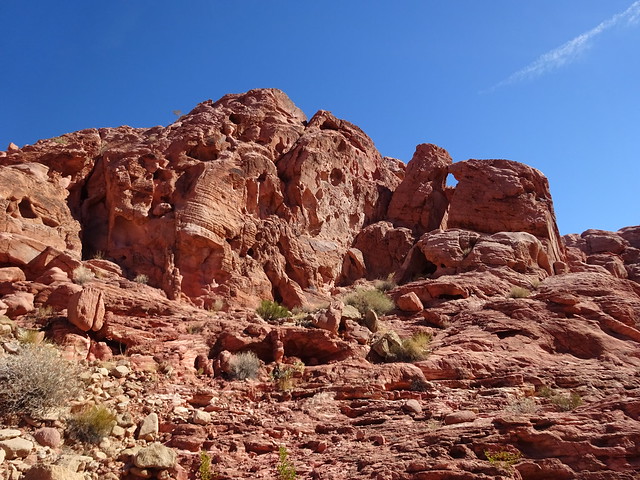 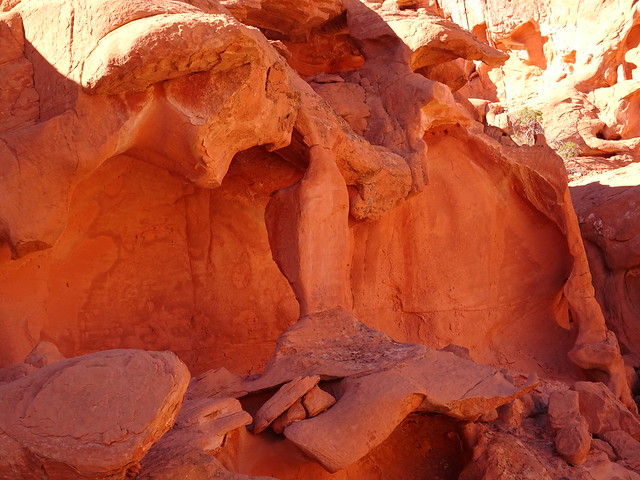 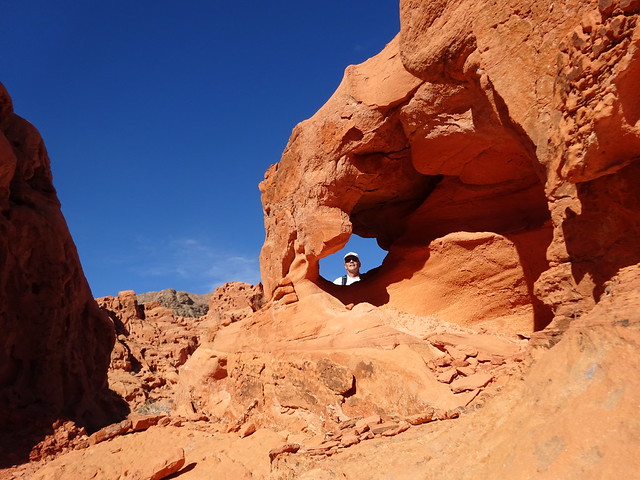 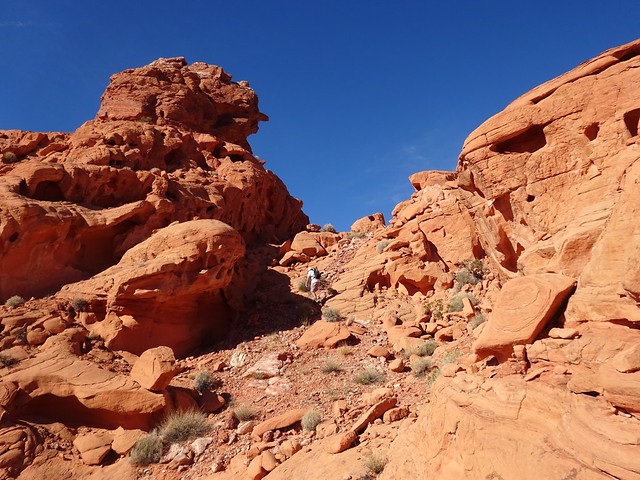 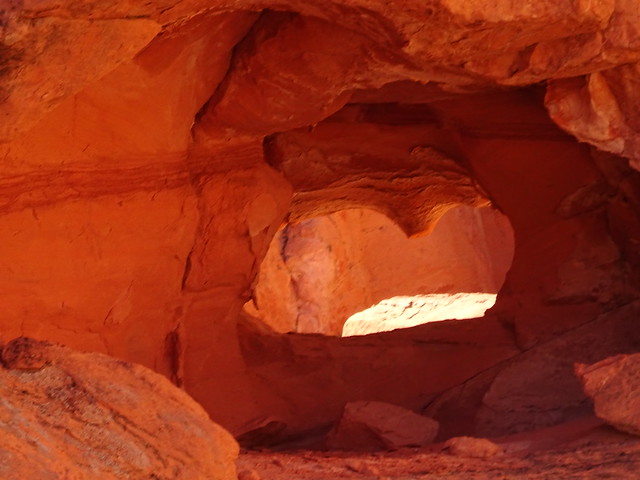 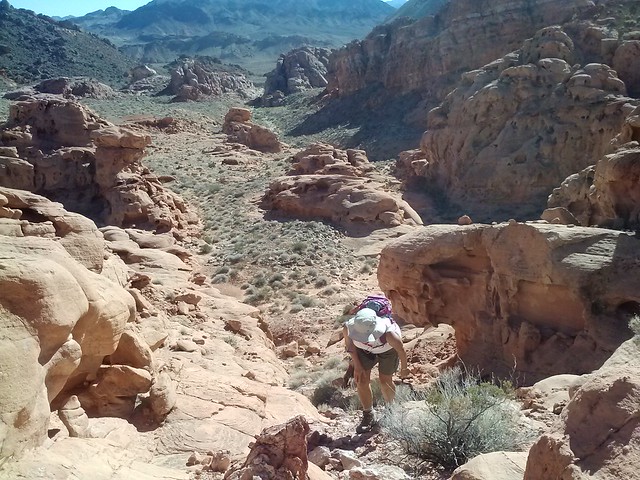 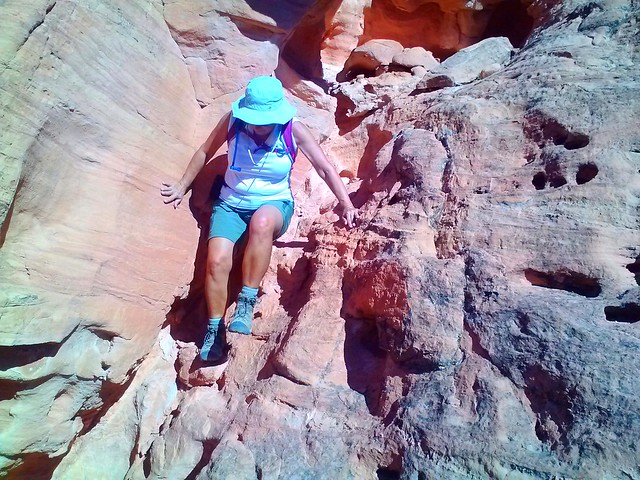 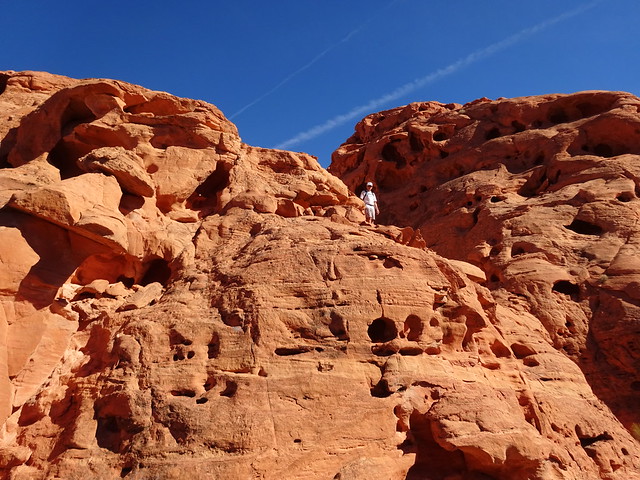 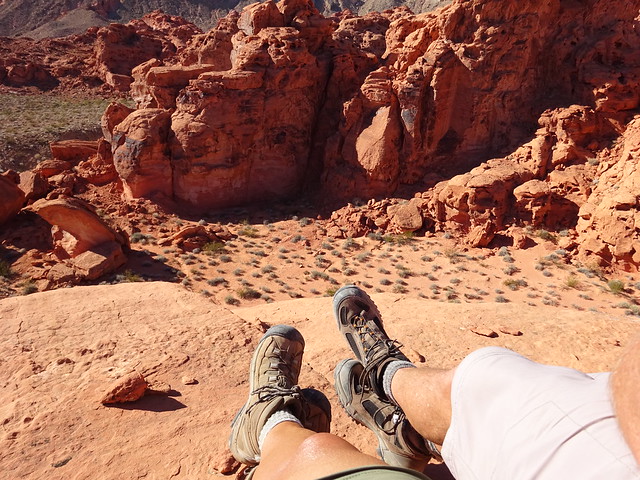 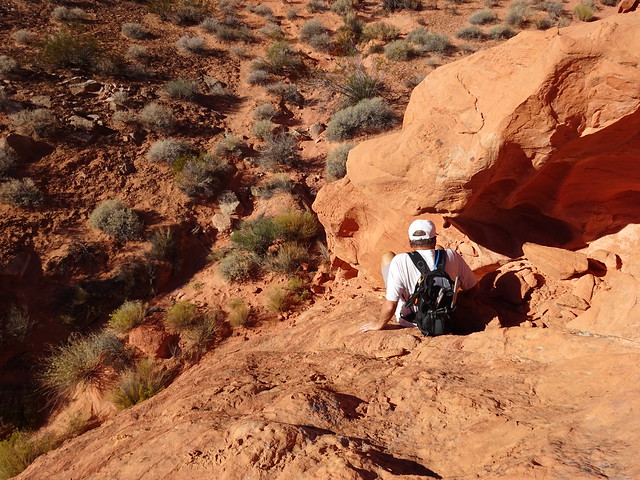 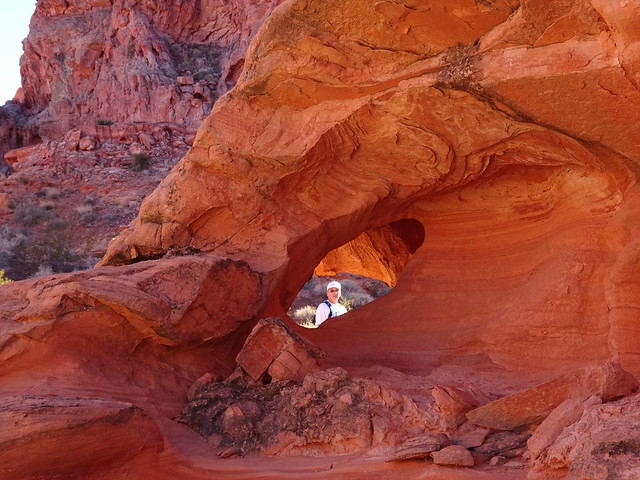 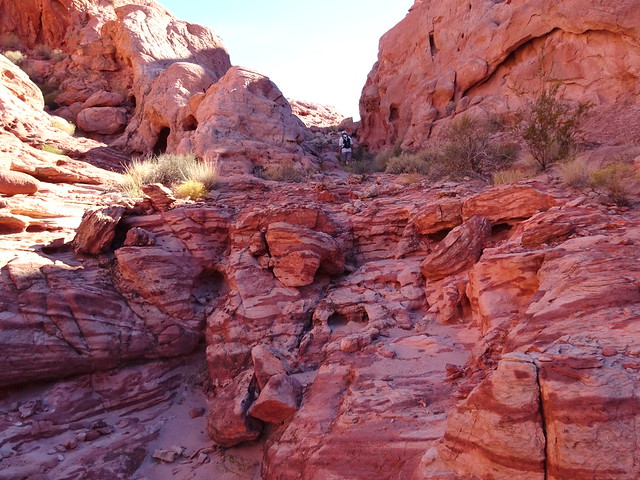 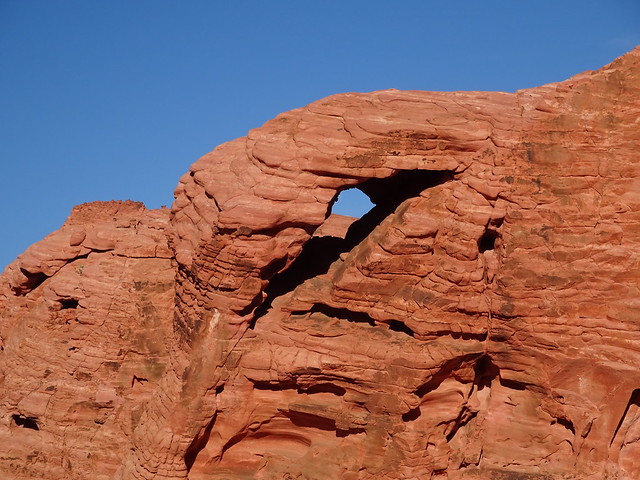 While we only hiked a total of about four miles, it was all in a sandy wash or climbing up and down rock formations, so it seemed a great deal longer.  But the colors are alive through most of the trek, so we had a great time in the Bowl of Fire.  We’ve been here twice and it is so large we could spend many more hours exploring here, but there are other areas we need to explore around Lake Mead during our final week in Boulder City.

19 Responses to A Second Visit to the Bowl of Fire