Group Hike in the Bowl of Fire

Posted on November 5, 2014 by placestheygo

Last month while we were in Utah Lake State Park near Provo we had the opportunity to meet up with Brian and Leigh of Aluminarium.   When we learned that they were camping in an area near Lake Mead called Government Wash, we set up a a hiking date with them to the nearby Bowl of Fire.  The day before our hike, Brian and Leigh met fellow full-timers and Airstream owners (Brian and Leigh have an Airstream) Andrew and Becky of Rosie the Riveted who are also camping in Government Wash.  They are also hikers and follow our blog, so Brian and Leigh invited them to join us.

So early Sunday morning we drove out to Government Wash and, after meeting Andrew and Becky, headed for the trailhead.  We drove out North Shore Road to mile marker 16, where we left the paved road and drove about two miles up the Callville Wash Road.  Some web sites had described the road as a bit rough, but we have a Jeep Wrangler and Andrew and Becky have a Toyota Land Rover so we knew we could handle a bit of rough stuff.  But the road turned out to be a piece of cake.

We found the trailhead, parked the vehicles, and set out up a wash to visit the Bowl of Fire.  The Bowl of Fire is an area inside the Muddy Mountains Wilderness Area where brilliant-red  sandstone outcrops are surrounded by gray limestone mountains.  The limestone forms the sides of the bowl, and the red sandstone forms the fire in the bottom.  Initially, the wash is wide and open before it narrows at a place where it cuts through a layer of green mudstone (volcanic ash). 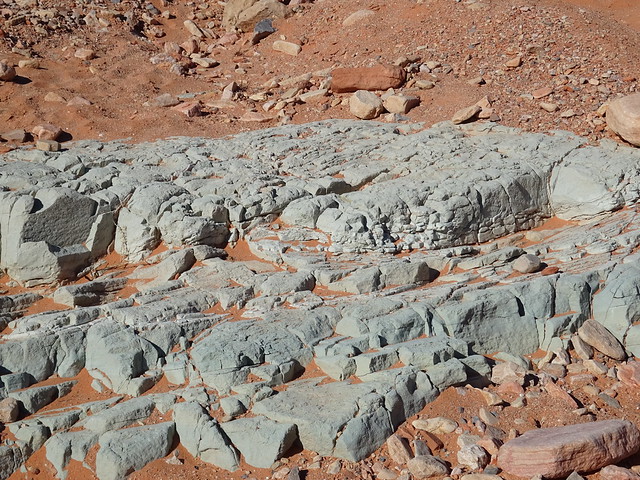 After a short distance we climbed into the area of eroded red sandstone. 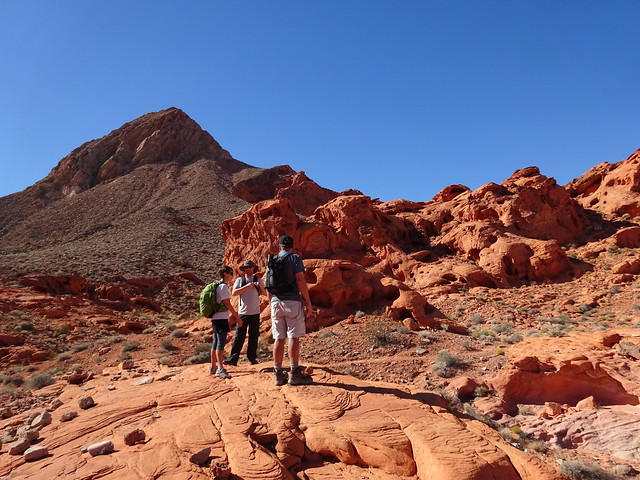 The erosion provided us with some great “photo ops” in the sandstone. 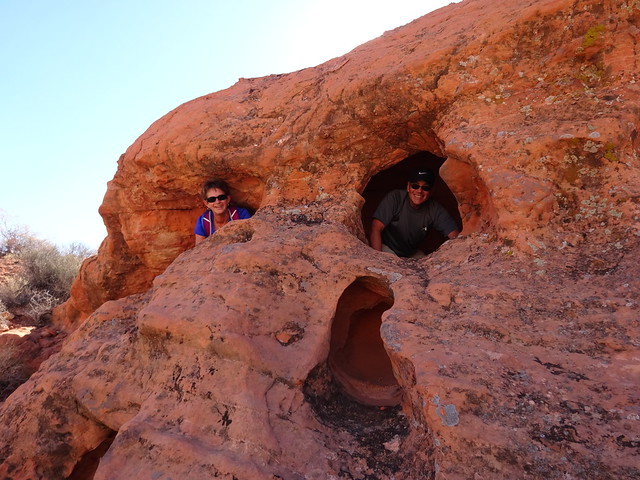 We really “get into” the red rocks! 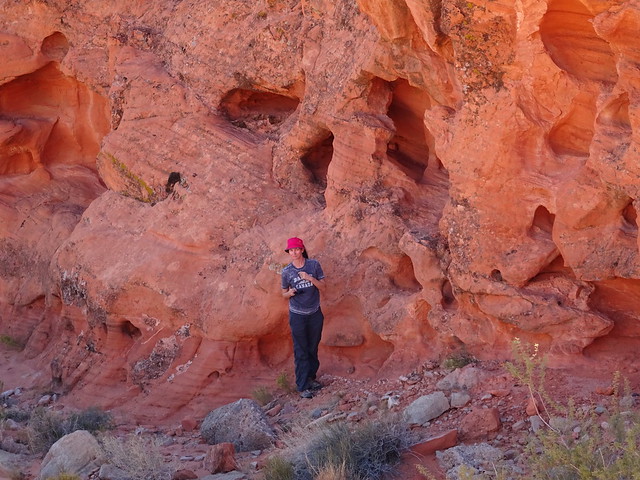 Leigh checks out the sandstone

One area provided a great spot for a group photo.  Leigh used the timer on her camera to snap the shot below.  We are at the center of the picture.  Becky and Andrew are on the left and Brian and Leigh are on the right. 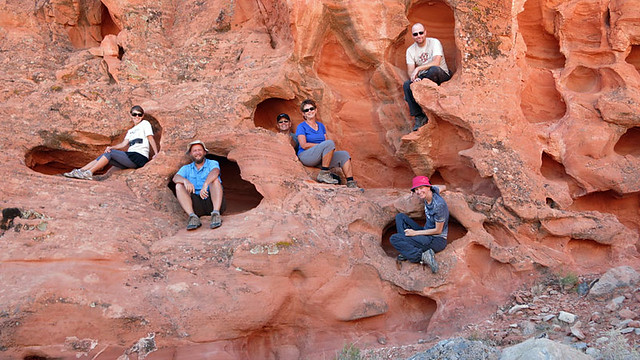 We spent the next hour just wandering among the rocks enjoying the scenery. 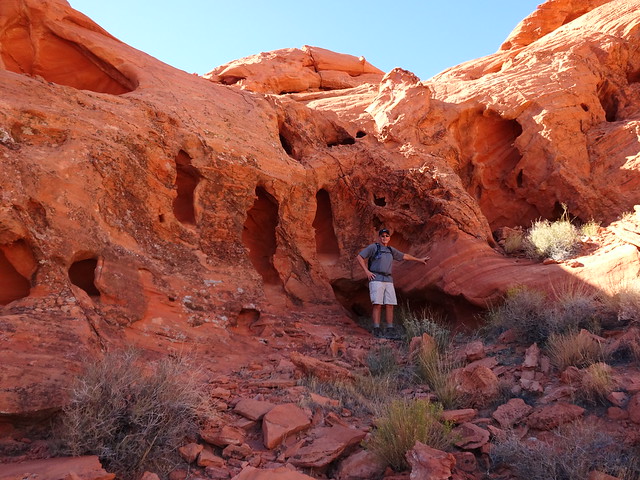 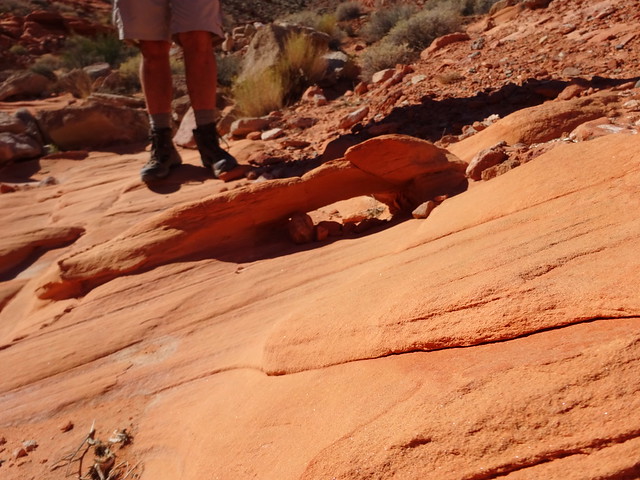 Arches come in all sizes! 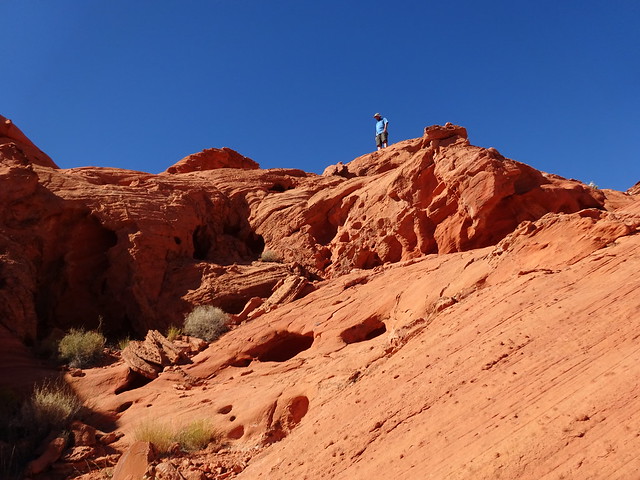 Andrew checks out the views 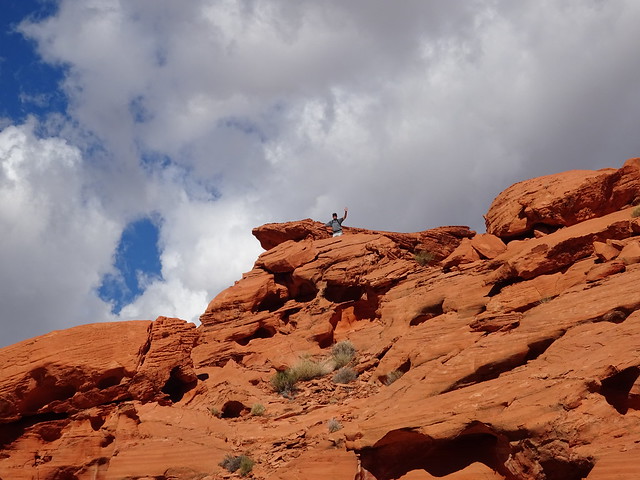 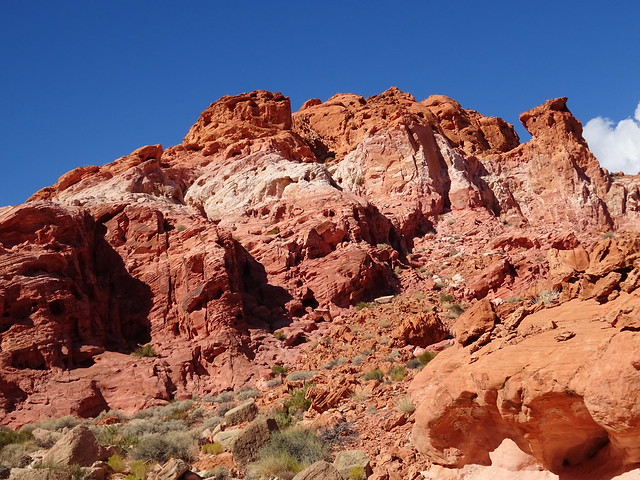 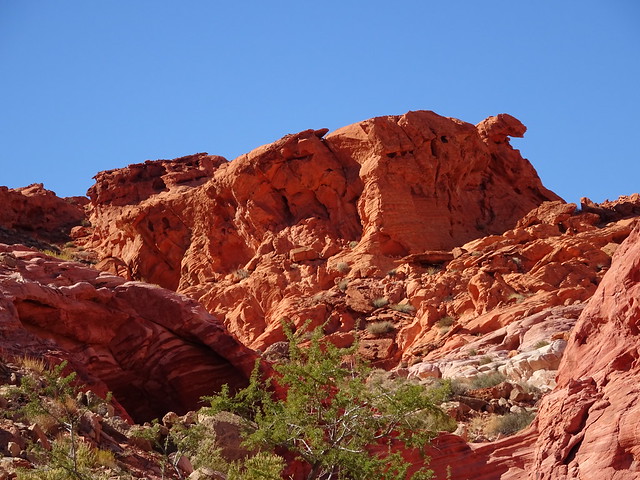 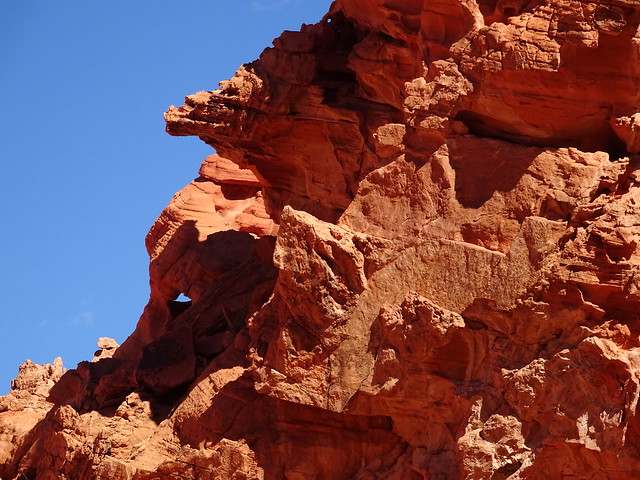 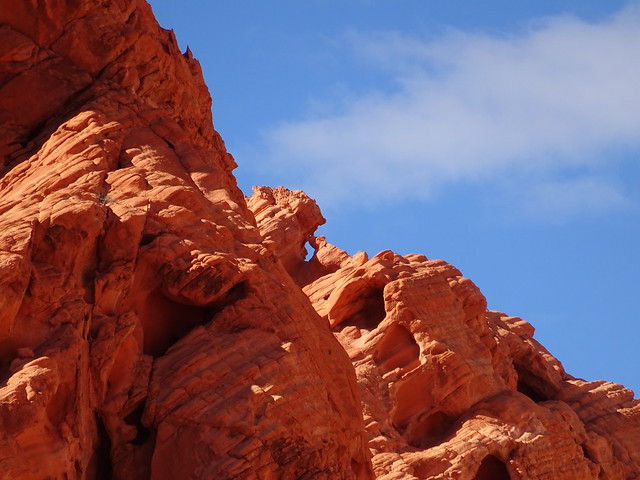 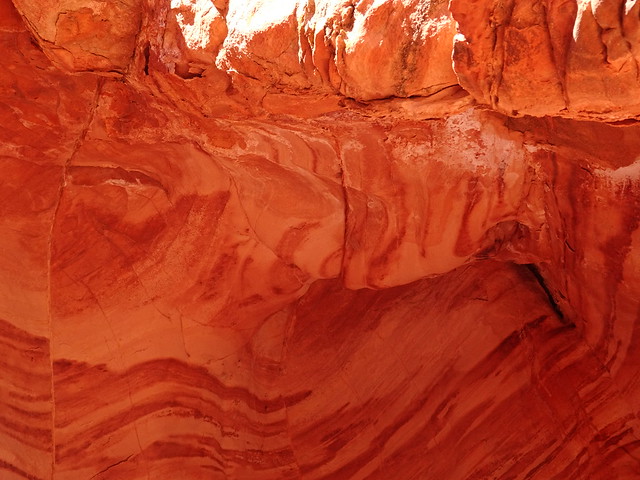 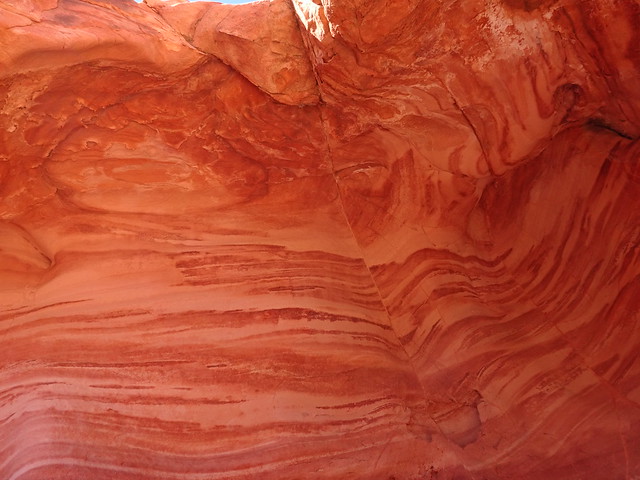 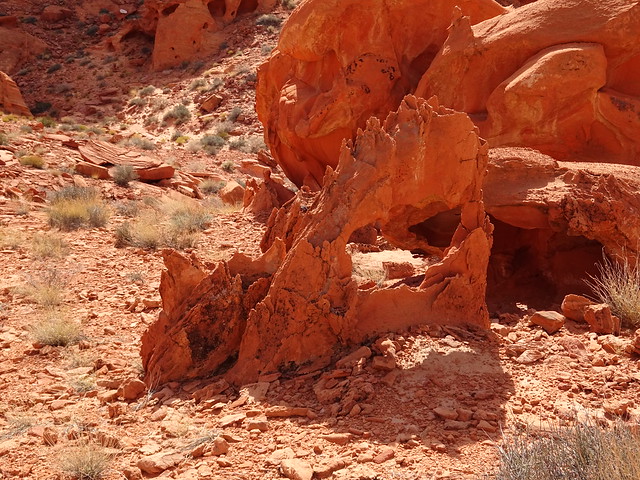 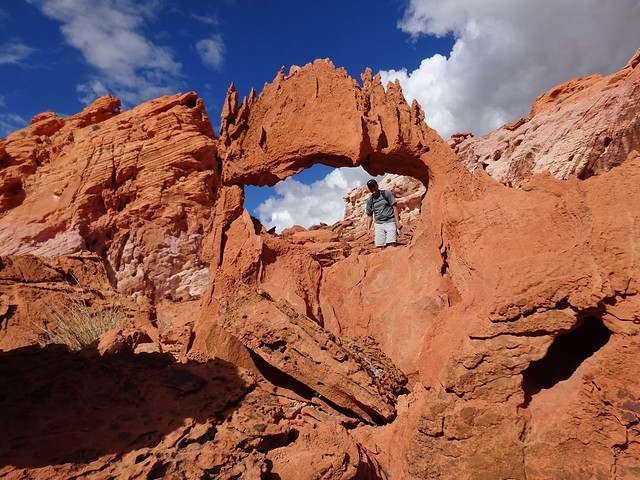 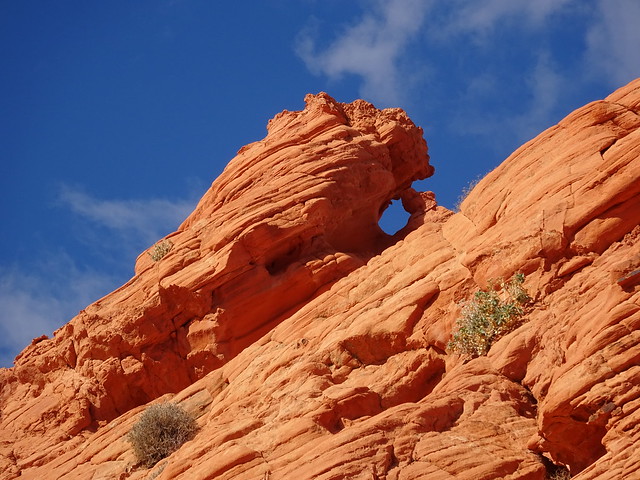 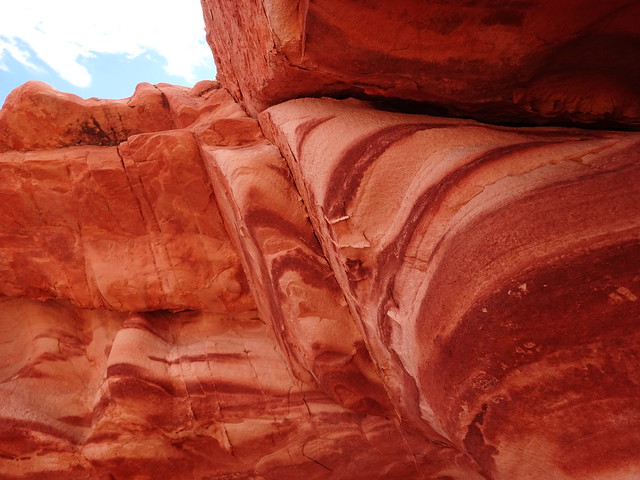 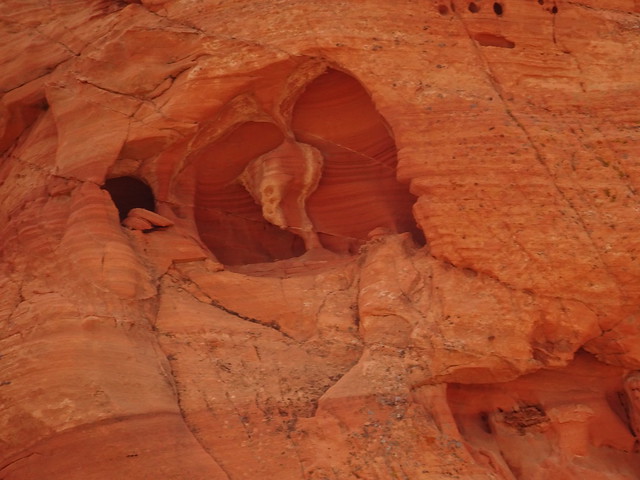 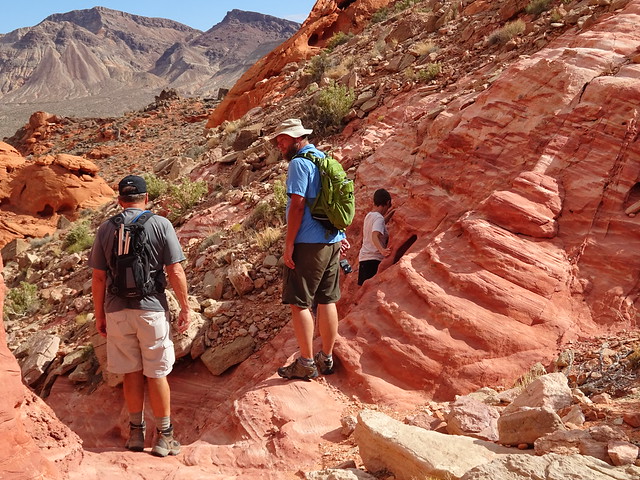 Hiking back out of the Bowl of Fire

We had a great time hiking with Brian & Leigh and Andrew & Becky.  Also, we were very impressed with the Bowl of Fire.  There is so much to see in this area that we are planning a return visit soon.  Oh, boy,  more pictures of rocks ! ! !

17 Responses to Group Hike in the Bowl of Fire