While hiking earlier this week, we spoke with a young couple who live in this area.  We asked about good hikes around Las Vegas and they recommended we look at a hike to Turtlehead Peak.  The peak is in the Red Rock Canyon National Conservatory Area, which is about forty miles from our base in Boulder City and a few miles west of Las Vegas.  After a little research we found the hike to the top of the peak is only about two and a half miles.  OK, that’s not too bad.  But the hike is listed as “difficult” as the route climbs over 2,000 feet.  That is pretty steep, but the hard part is climbing the 800 vertical feet in the gully and chute system that leads to the summit ridge in less than half a mile! 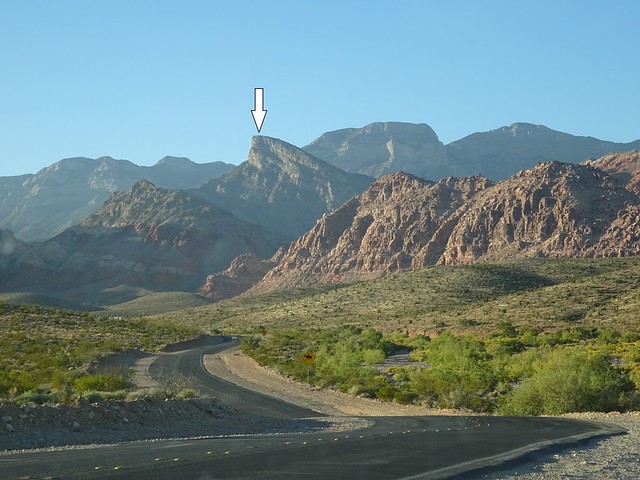 A view of Turtlehead Peak from the highway

We’re always up for a challenge and the hike is listed as challenging because it is strenuous, not because it is dangerous.  So off we went for a little adventure.  The parking area was crowded when we arrived as there are several trails that begin at the same point.  But we found a place along the road and set out. 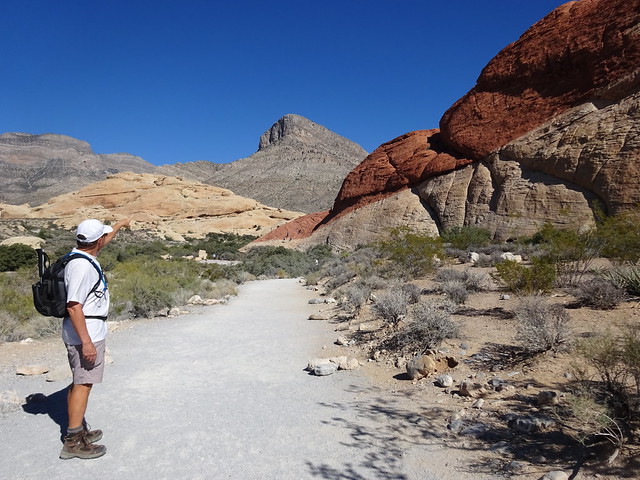 The first half of the hike is on a well-defined trail with a gradual gain in elevation. 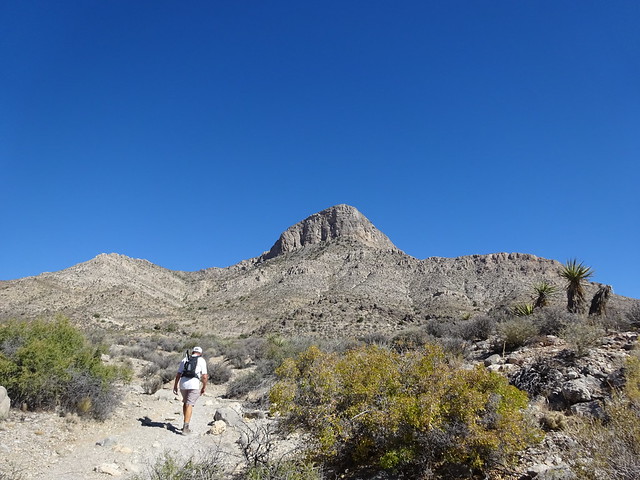 But as we approached the gully on the left of the peak things got a bit interesting.  This is an un-maintained trail with many paths to chose from.  So the best you can do is chose a path and stick with it. 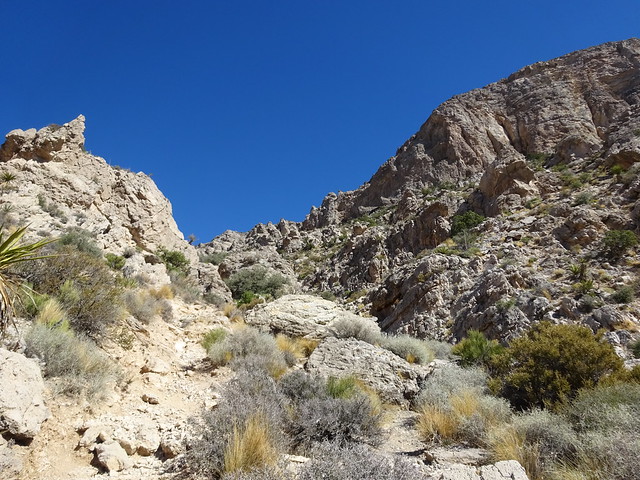 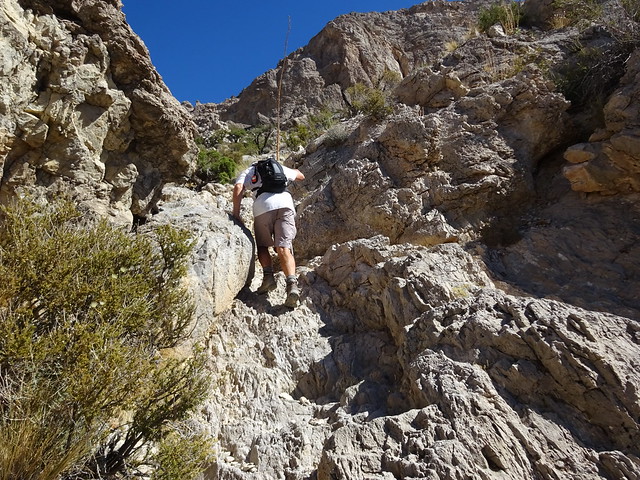 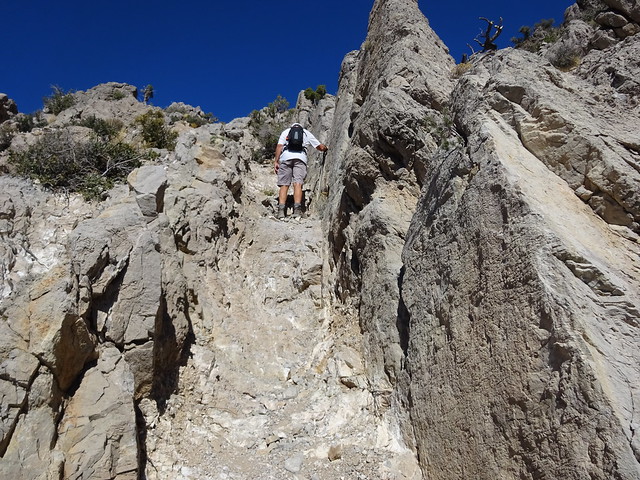 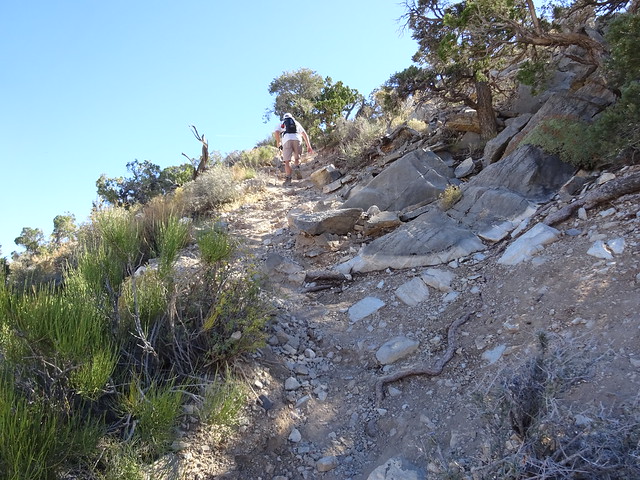 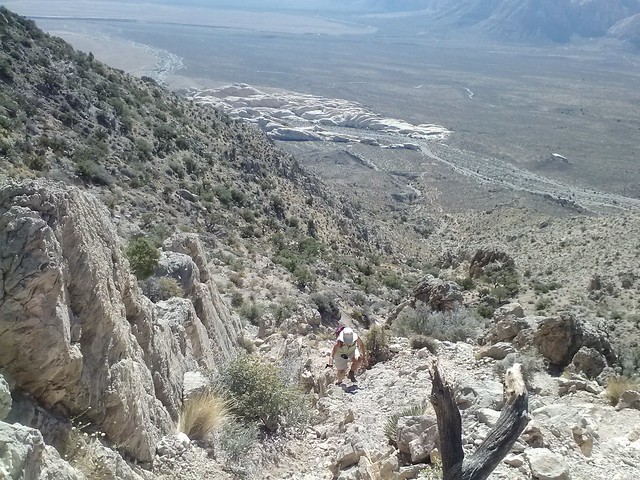 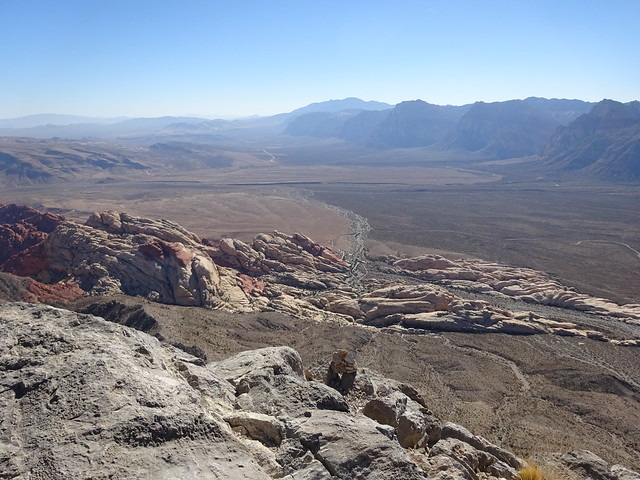 The parking area is in the center of the photo above, but it is a bit far away and difficult to see.  So a zoom shot is needed to be sure the Jeep is still there. 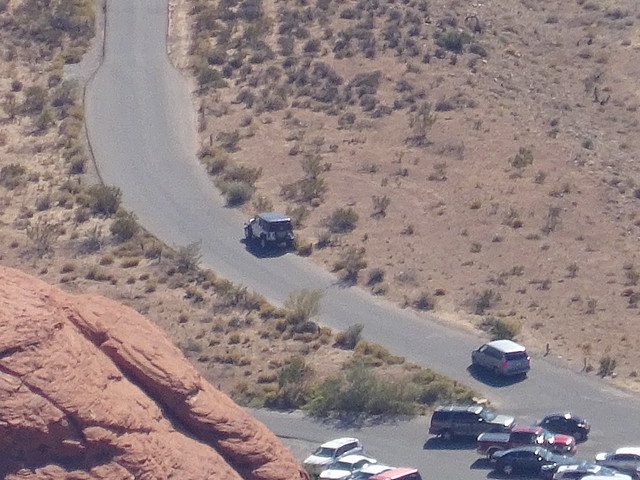 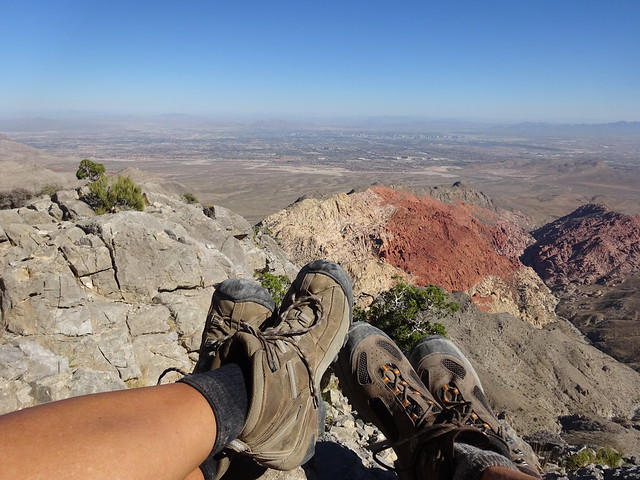 Lunch with a view – Las Vegas is in the distance 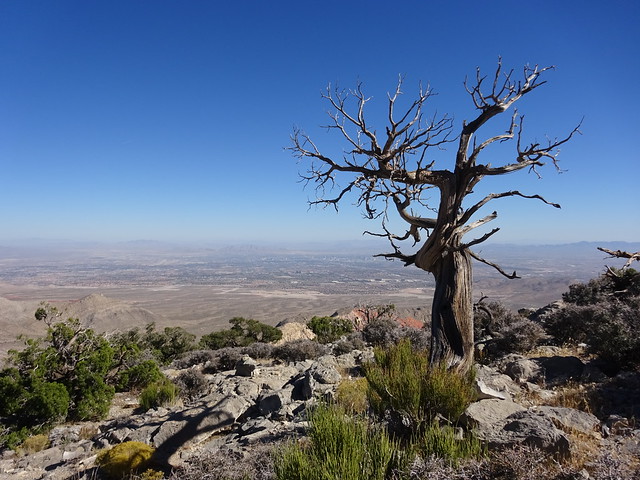 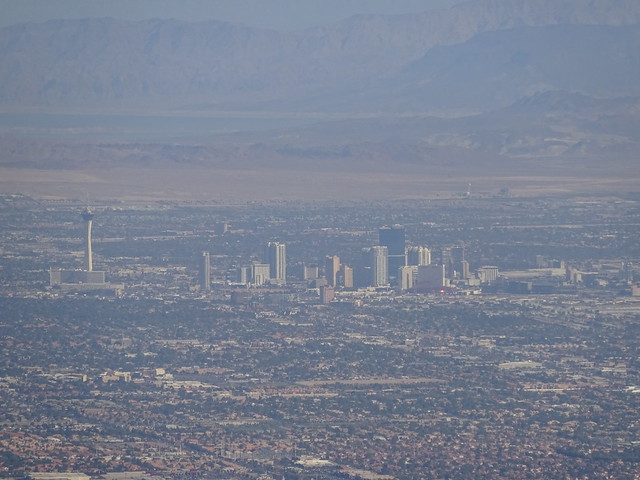 A zoom shot of “The Strip”

While the hike up the trail was a challenge, the hike back down was equally difficult. 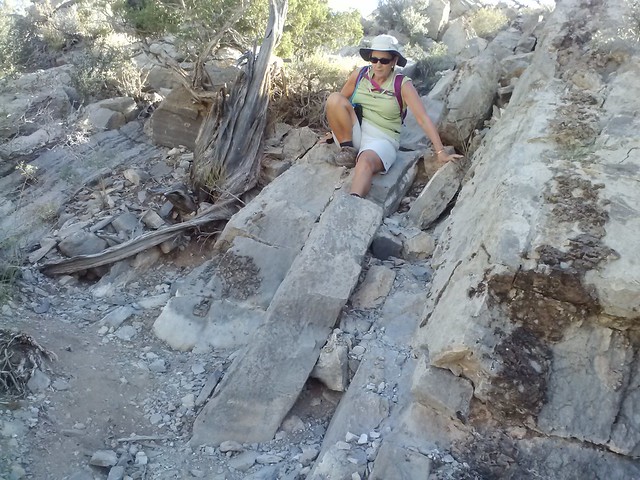 When not sliding down a steep rock formation, we had to navigate down long, steep stretches of loose gravel.  Lisa of Metamorphosis describes it as walking on marbles down hill.  We agree! 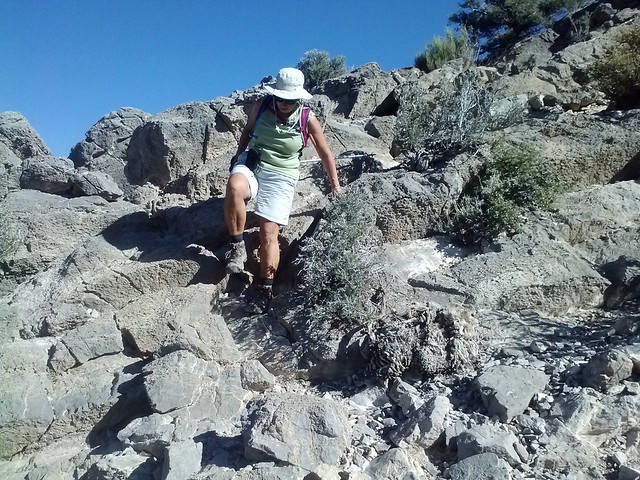 As we descended the views were pretty interesting. 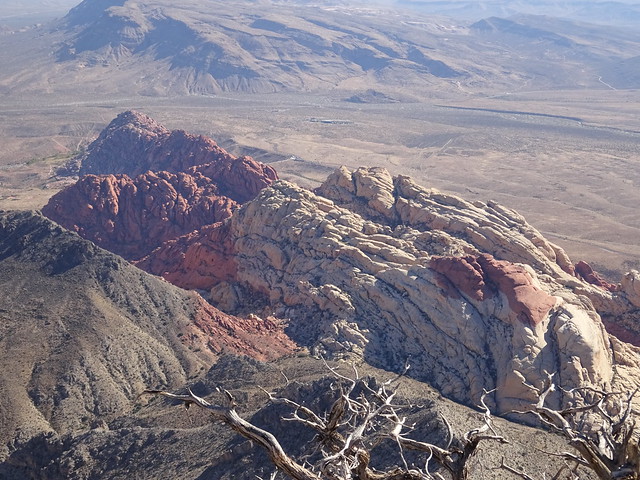 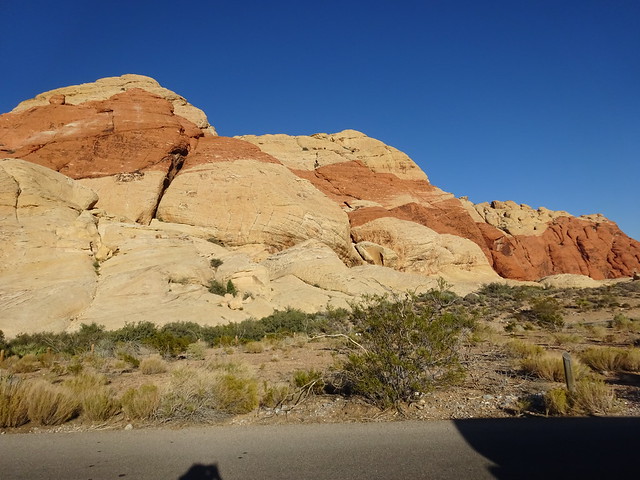 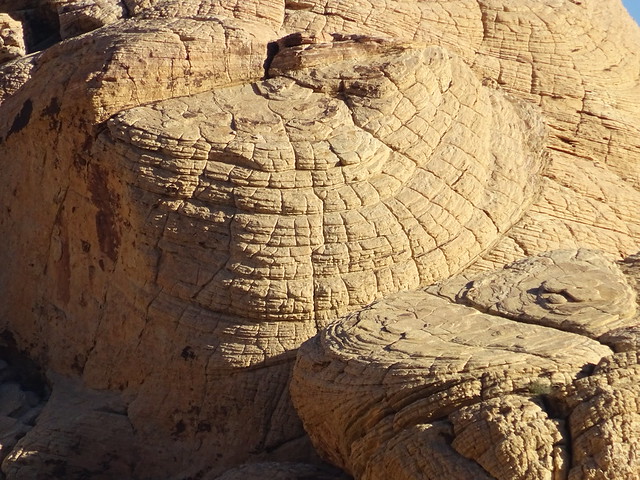 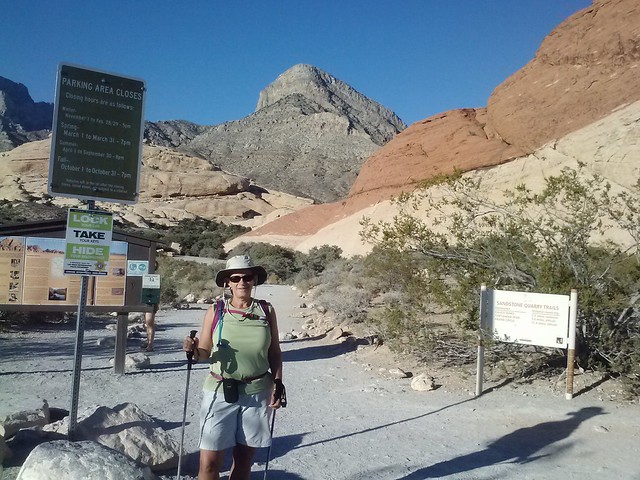 The hike up to Turtlehead Peak might be the most challenging we have done.   But we took our time, drank plenty of water, and ate something at the top and were able to complete the hike without incident (OK, someone scraped and banged an elbow sliding down some gravel).  But it sure felt good to get back to the Jeep and head home!