In our last blog we wrote about missing a turn leading to the Liberty Bell Arch and ending up hiking down to the Arizona Hot Springs.  The next day we returned to the same trailhead, determined to find the turn leading to the arch.  We carefully charted the mileage on an app we use and followed the description found on a website. Sure enough, a trail split off from the wash and went to the north right where it was suppose to.  But we could see why we missed it yesterday.  The trail is poorly marked, with only a small cairn (pile of rocks) marking the turn, and that was partially obscured by a bush. 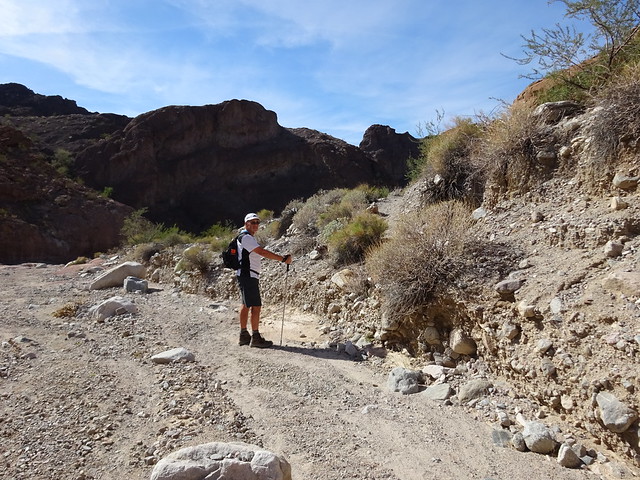 Do you see the trail on the right?

We climbed up the trail for about a half mile to where it joins an old mine road.  After a bit we came to some of the abandoned equipment near an old magnesium mine.  There is an aerial cable with what appears to be a big, wooden cable car lying on the south-facing hillside.  This car was not moved on the cable, rather it was used as a loading chute for trucks that were driven up the road and parked below the chute that lies below the cable car.  The mine is on the opposite side of the hill and the ore was hoisted up the other side on a cable.  It was then dumped into the chute and slid down into the truck. 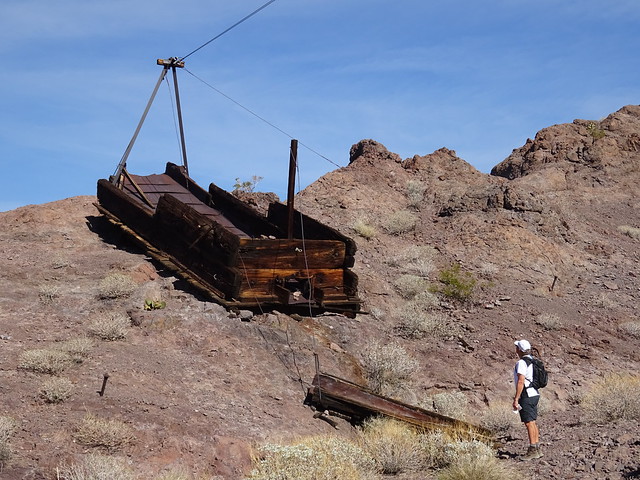 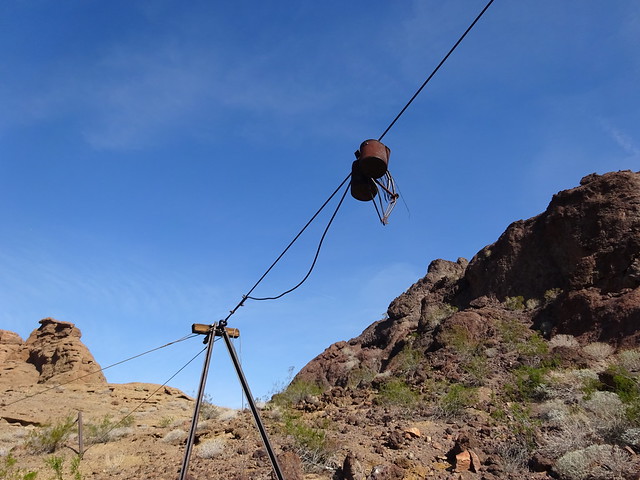 Cable on the other side, by the mine entrance 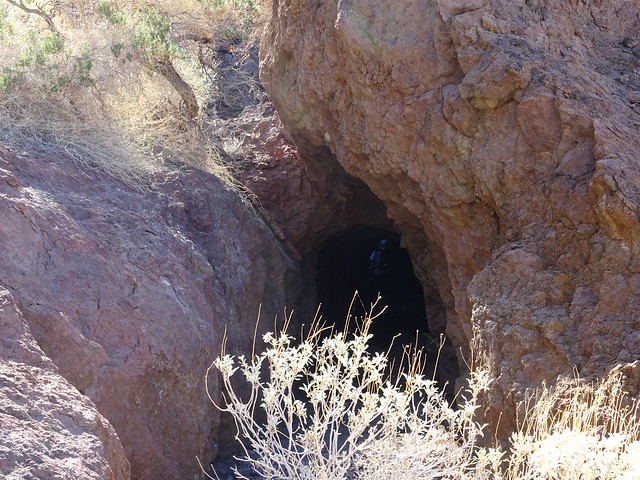 Entrance to the mine

At the mine site , an adit (frequent crossword puzzle word – a horizontal mine shaft) goes back about 60 feet, but there are skylights, so you can go all the way to the back without a flashlight.  Inside the mine, there are some tiny ore-car tracks (probably pushed by hand), old buckets, wooden timbers lying on the ground, and the last of the bore holes that the miners drilled before they gave up. 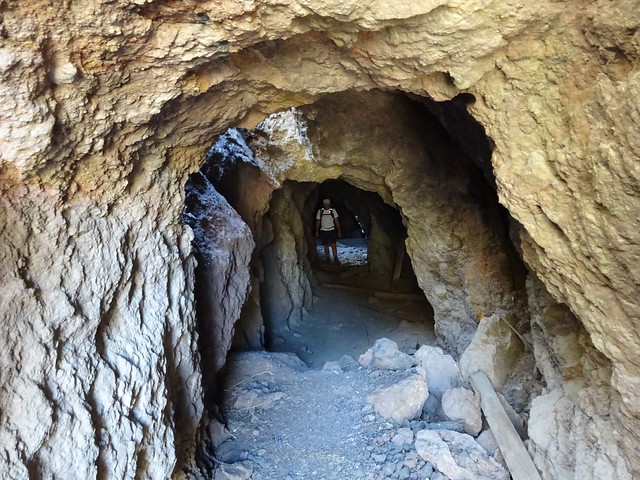 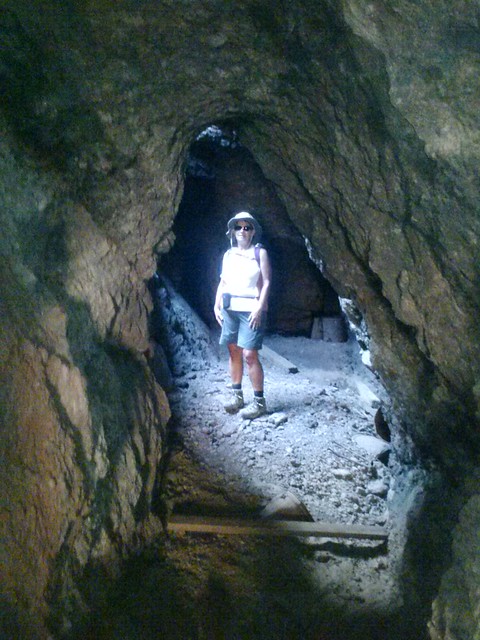 A number of old buckets and other debris were scattered around the mine.  The rusted tin pictured below looked like an old tin container that tobacco came in. 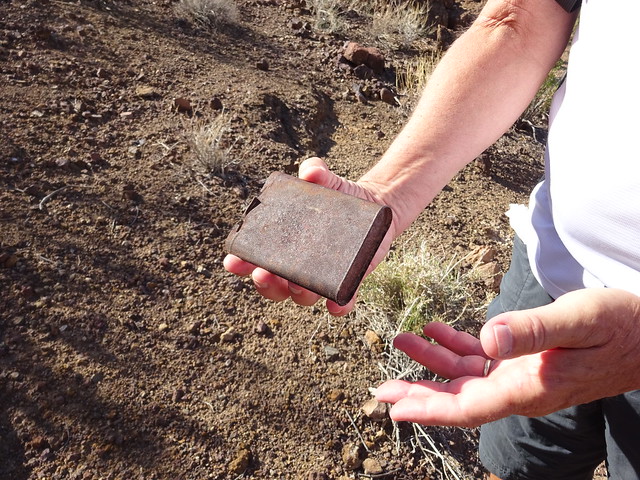 From the mine entrance we could see the rest of our hike to the west.  In the photo below the arrow on the right is the arch, although you can’t see it too well as it is a side view.  The arrow on the left is the Black Canyon Overlook, a thousand feet over the Colorado River. 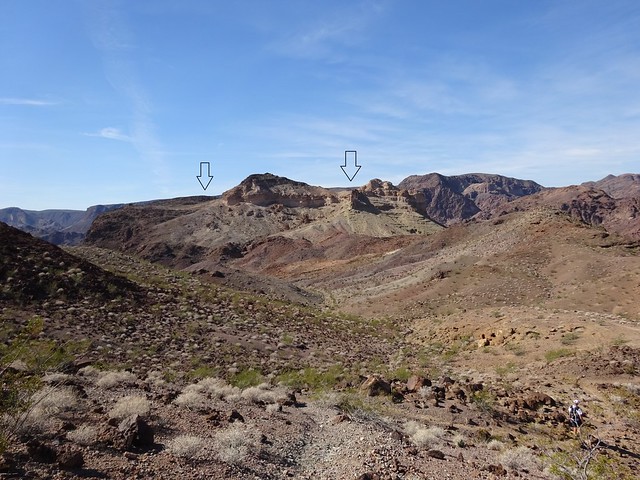 As we hiked to the west the arch slowly came into view. 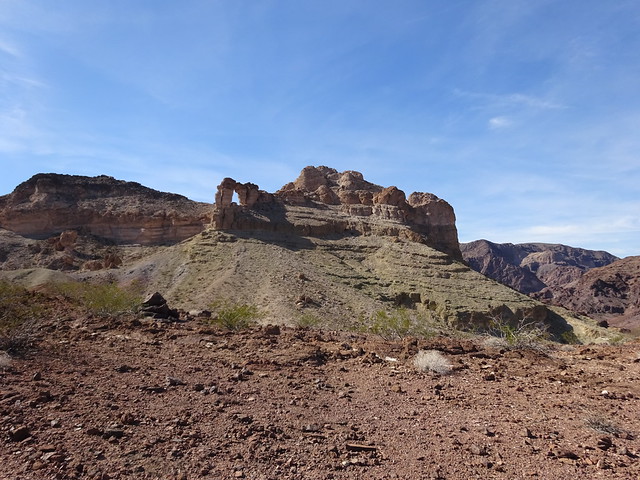 Around the south side of the arch, the reason for its name becomes evident. 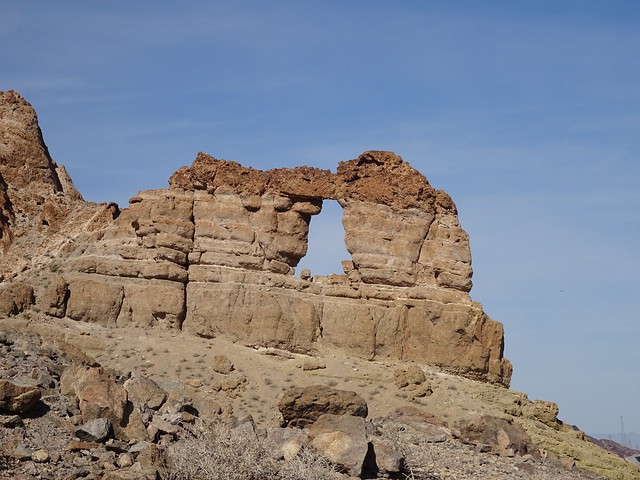 We continued for another half mile on a gradual elevation gain to the top of the Black Canyon Overlook and were rewarded for our efforts with a great view of the river. 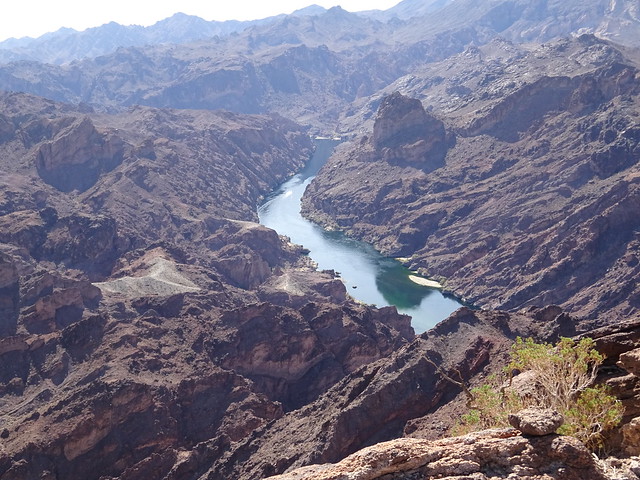 Looking to the south

In the view to the north we noticed a bridge in the distance.  Can’t see it? 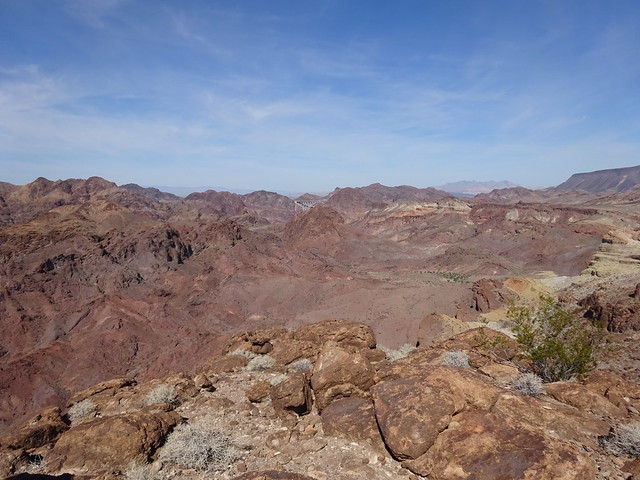 A zoom photo gives a better view.  It is the  Mike O’Callaghan-Pat Tillman Memorial Bridge.  Opening in 2010 the bridge allows traffic to bypass the Hoover Dam (more on the bridge in a later blog). 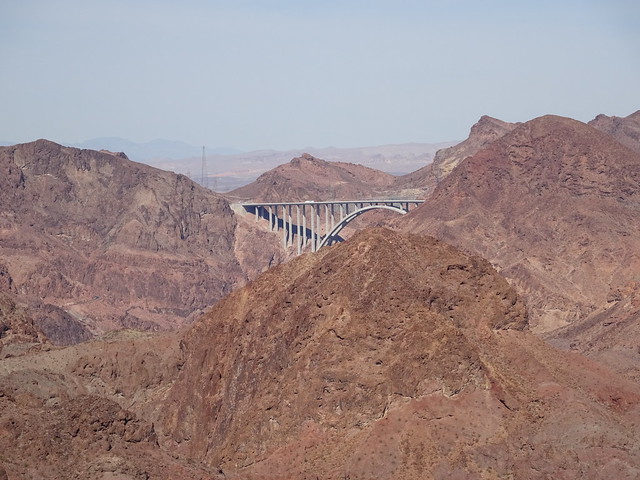 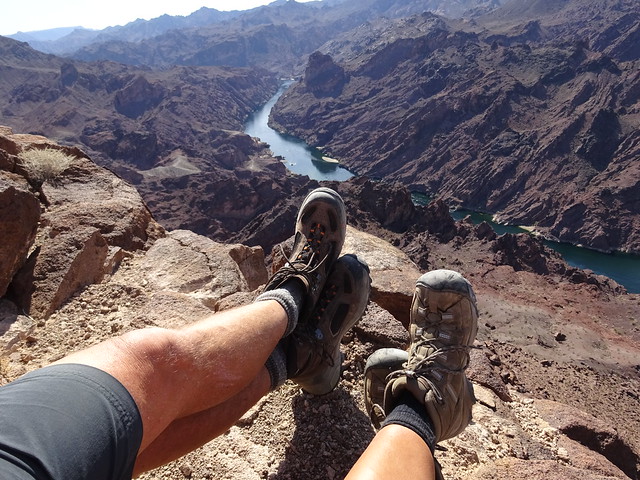 After enjoying lunch on the overlook we began the return hike, stopping to enjoy great views of the Liberty Bell Arch. 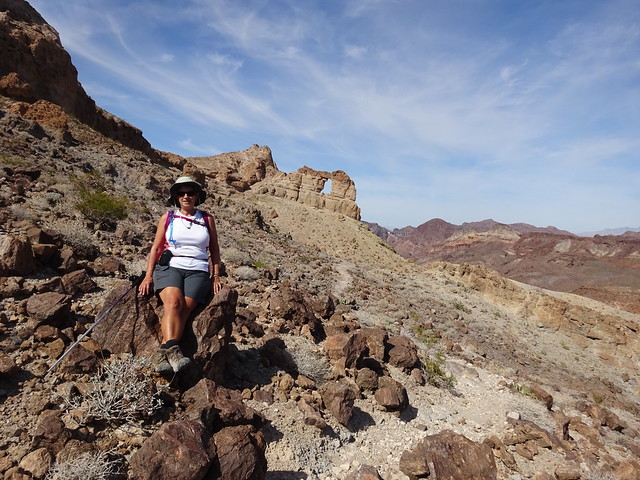 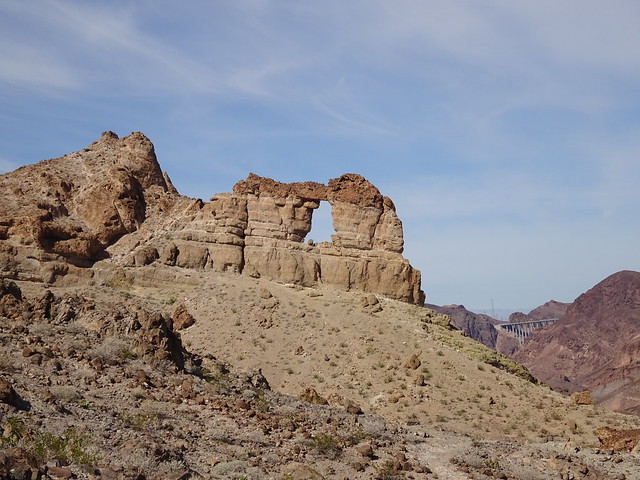 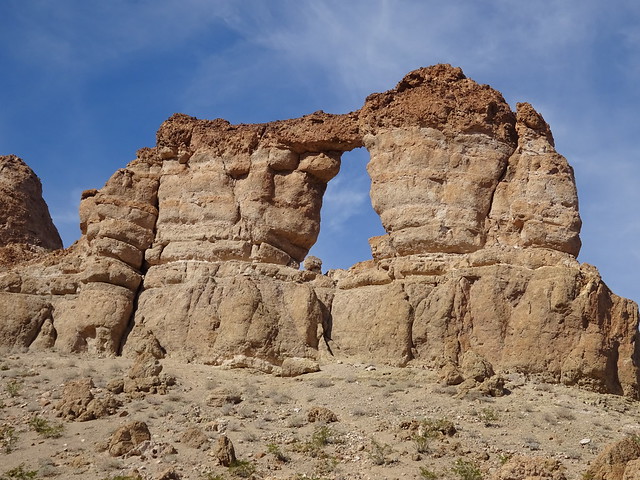 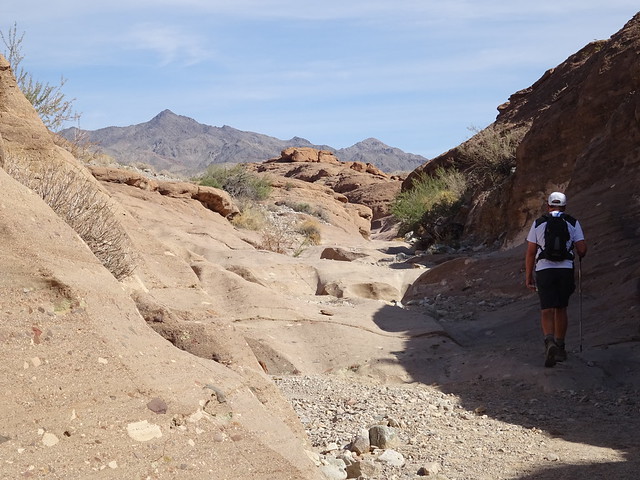 Heading back up the wash to the trailhead

The hike out to the arch and the overlook is around three miles one way.  There is a bit of up and down elevation change (more up than down) on the way out but the trail is good and the beautiful vistas hold your attention.

We’re two for two on great hikes in the Lake Mead area already.  But there are so many neat hikes here we’re not sure which one to do next.  But that’s a good problem, right?

25 Responses to The Liberty Bell Arch