On Thursday morning we pulled out of Baker, NV and headed to the southeast back into southwestern Utah.   The southwest corner of the state is known as Utah’s Dixie because the Mormon pioneers who settled the St. George area came to the area to raise cotton.

We had a reservation for a week at Sand Hollow State Park in Hurricane, just north of St. George.  This is a nice park with full hook-ups and 50 amp electric for a reasonable price.  The park is next to a reservoir open to boating and fishing and an off road vehicle area on nearby Sand Mountain. 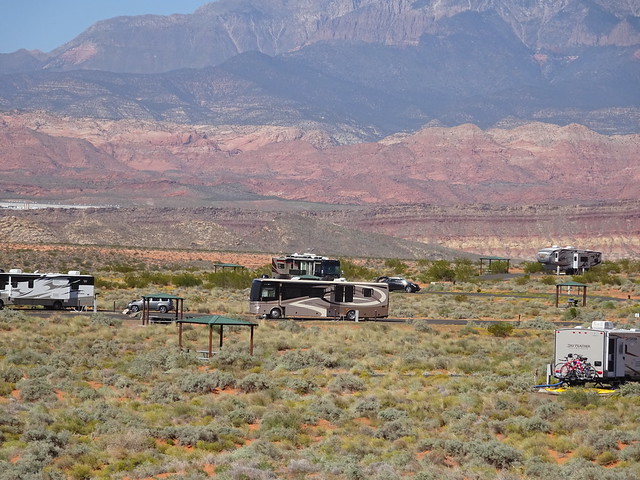 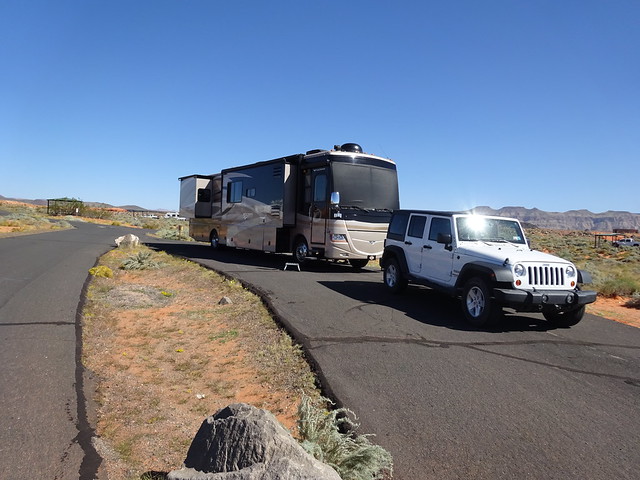 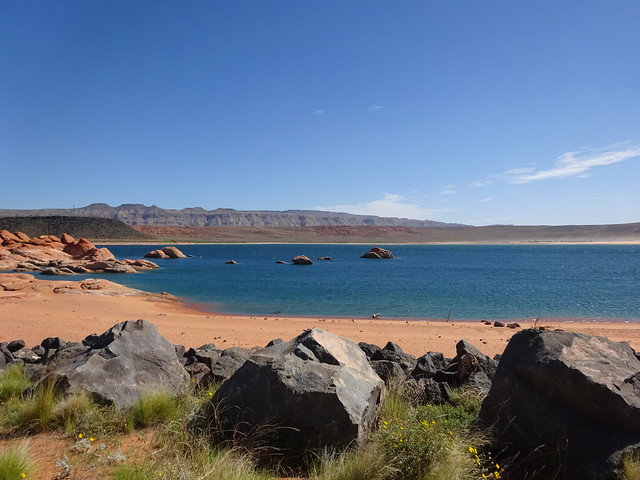 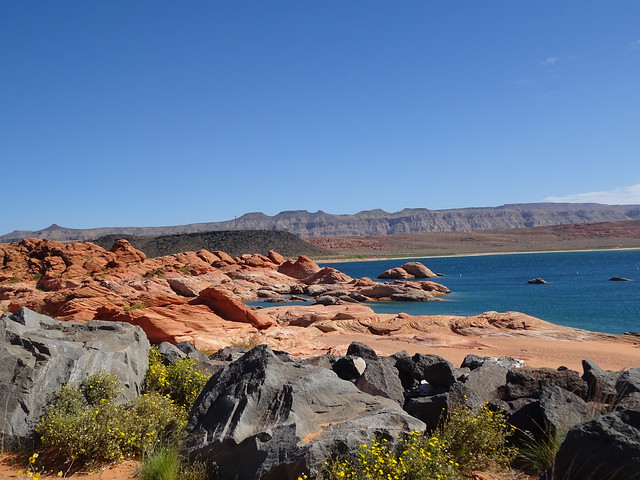 The nearby city of Hurricane (pronounced ‘Hur-ah-kun” by local residents) was first settled in 1896.  It received its name after a whirlwind blew the top off of a buggy and the driver exclaimed, “Well, that was a hurricane. We’ll name this ‘Hurricane Hill’.”  The community was settled as part of Mormon Church President Brigham Young’s ‘Cotton Mission’, intended to establish the southern end of Utah for agricultural purposes.  The town once operated a large peach and apricot orchard for the Mormon Church, and is historically known for growing, peaches, pecans, pistachio nuts as well as small farms.  The Virgin River flows near the town but in a deep ravine, making it difficult for settlers to get the water up to the town’s fields.  The answer to that problem is the Hurricane Canal.  The canal no longer carries water and a hiking trail now runs along its banks.

When the nimble hiker learned about the canal trail, we were off in the Jeep through some dusty dirt roads to the trail head.  The trail began over flat terrain with no sign of the river or canal. 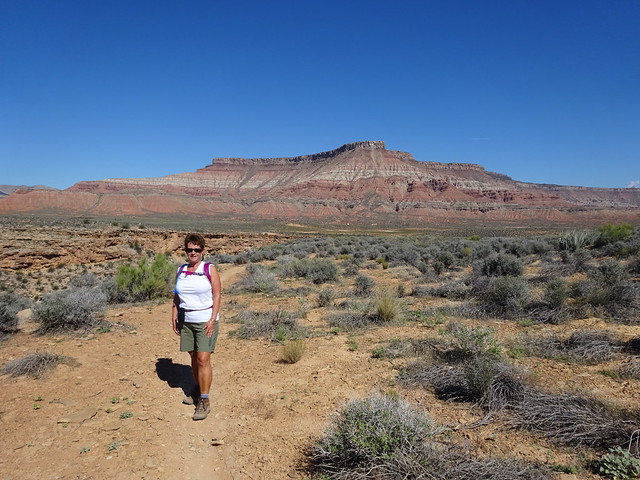 But soon the canyon came into view with the river 500 feet below us. 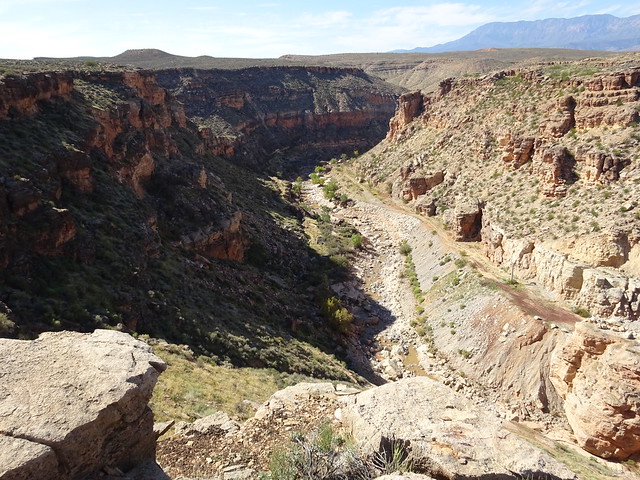 Yes, there is a river down below 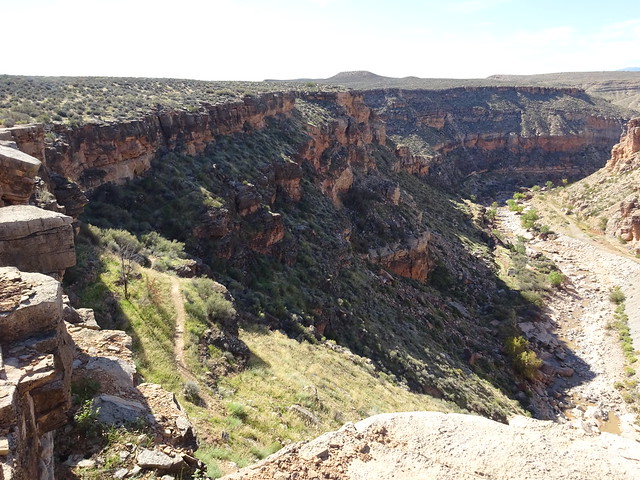 We hiked along the rim of the canyon a short distance to a spot where another trail headed down into the canyon. 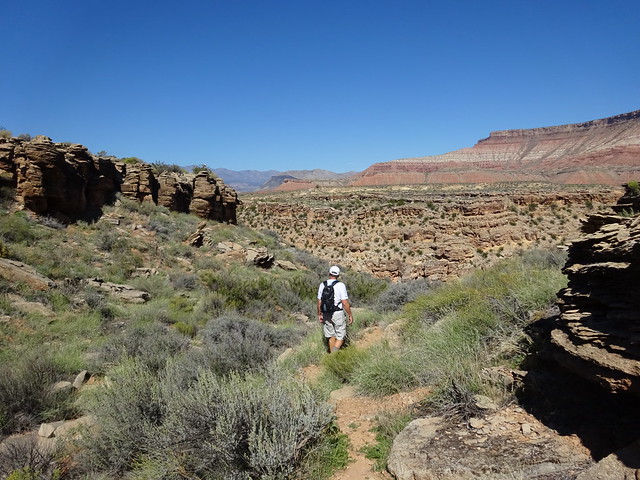 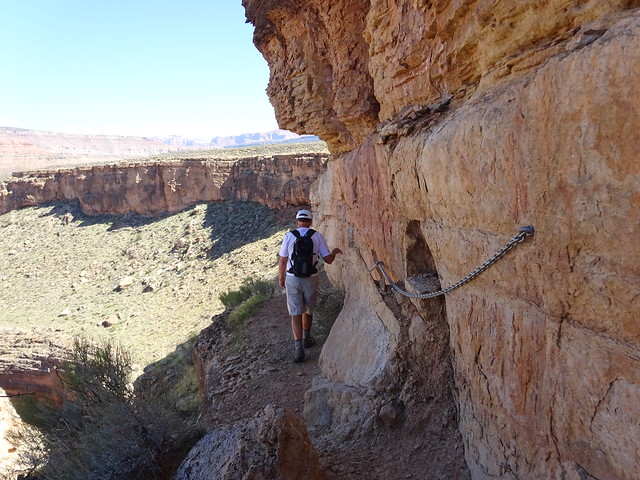 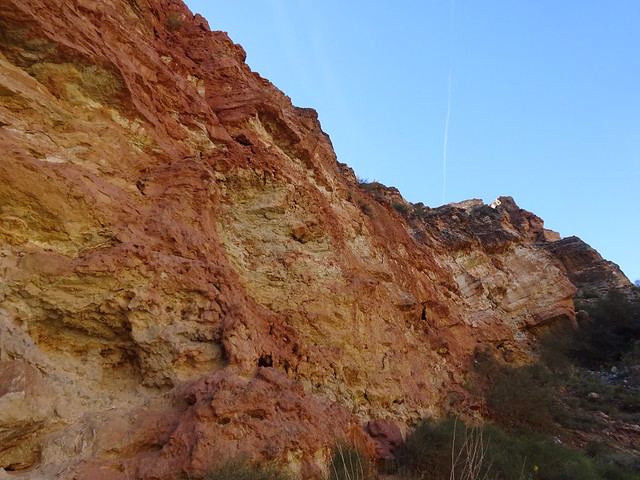 Red rocks above us as we descended into the canyon

After winding down the side of the canyon, we came to the edge of the Virgin River and soon came upon the remains of the old canal. 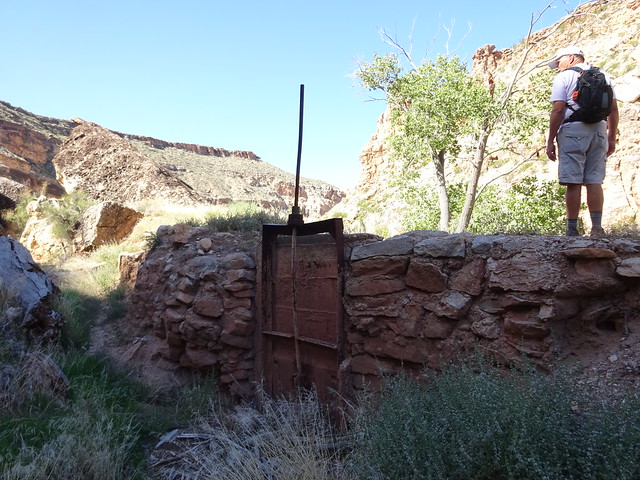 This seven mile canal is an example of the determination and perseverance of the Mormon pioneers who settled this area.  It is eight feet wide and four feet deep and was dug completely by hand.  Construction began in 1891 and was completed in 1904.  The completed canal brought water to 2000 acres of parched land and created the now successful village of Hurricane.  It served the community for more than 80 years until 1985 when a piping system was installed that bypassed the canal. 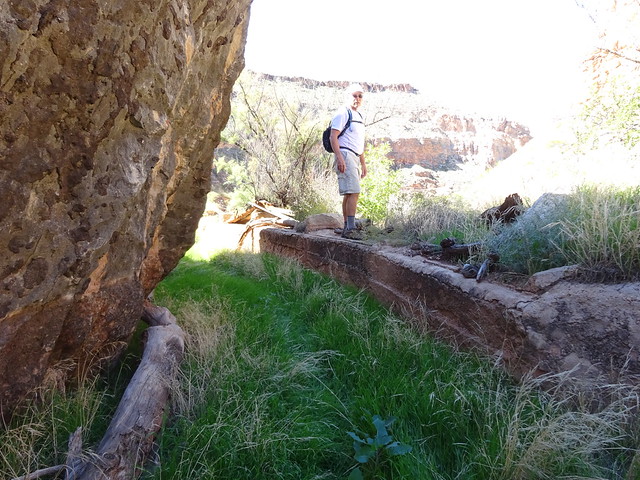 Canal wall along the cliff 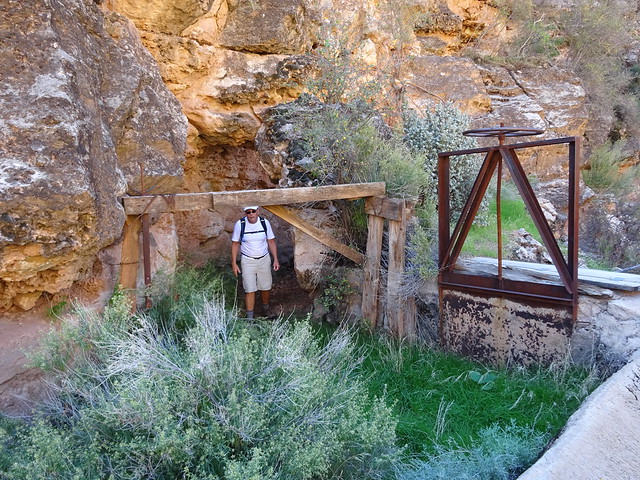 Remains of one of the 12 tunnels blasted through the rock 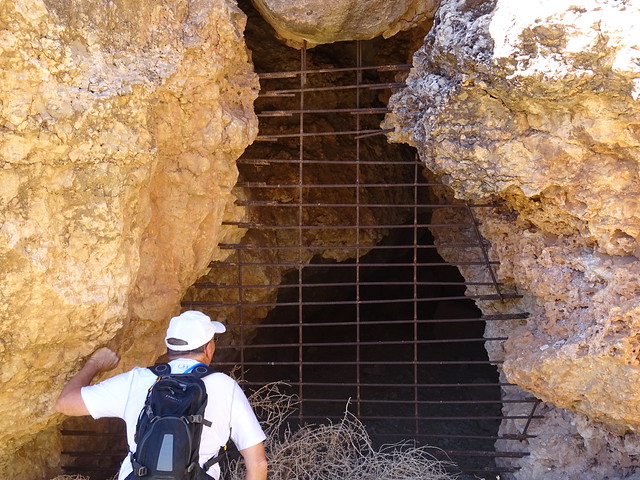 John thought this would make a good in-school suspension room!

A few miles down the trail we hiked down to the river and enjoyed a snack before the return trip. 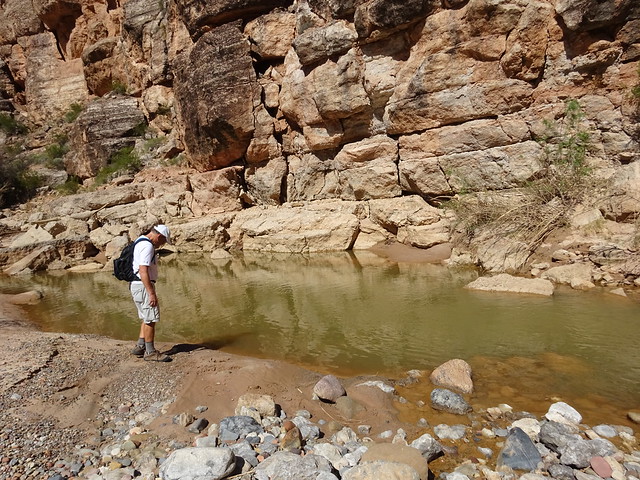 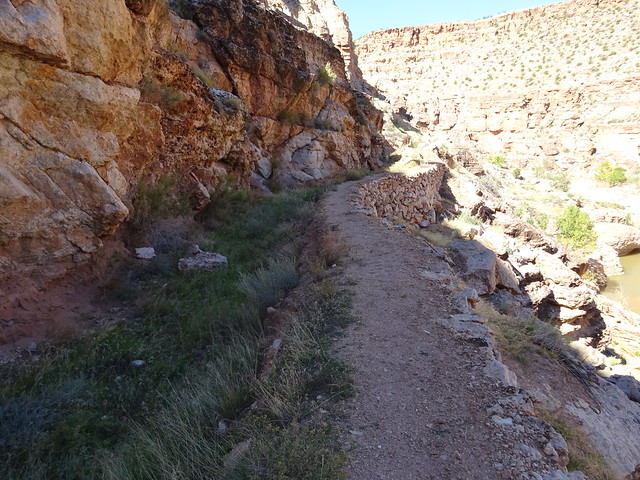 Canal on the left, river just visible on the right 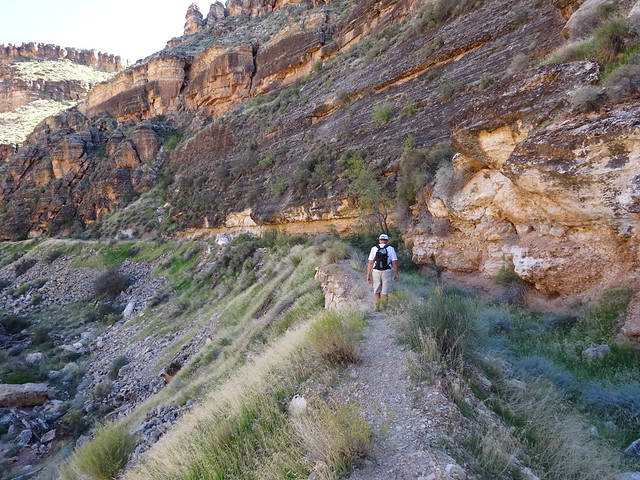 Hiking back along the canal wall 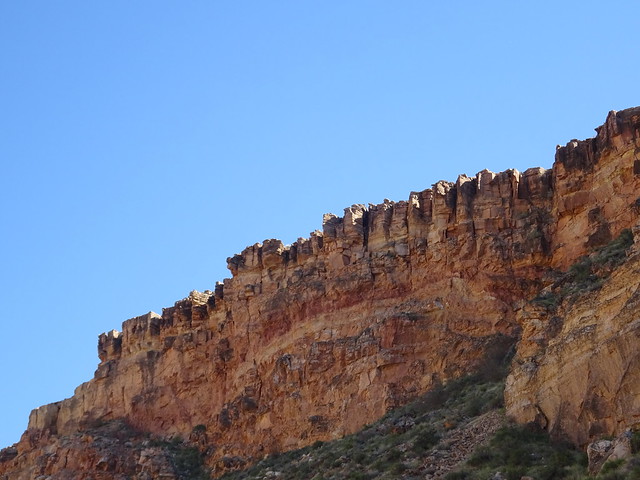 Our goal, the canyon rim

We enjoyed this hike as it was fairly short (we hiked less than four miles) but had some elevation challenge to it.  Since we’ll be here for a week and Zion NP is only a few miles away, you can be sure the nimble hiker is busy planning more adventures.

24 Responses to Visiting Dixie – in Utah