Posted on October 7, 2014 by placestheygo

Sunday morning we pulled out of Utah Lake State Park in Provo, UT and drove south, then west as we headed for the little town of Baker, NV (pop. 64).  Baker is at the entrance to Great Basin National Park, where we knew there was some mountain hiking in our future.

After about an hour we joined US-50 heading west toward Nevada.  Parts of the road are quite scenic as it winds through and over rocky passes. 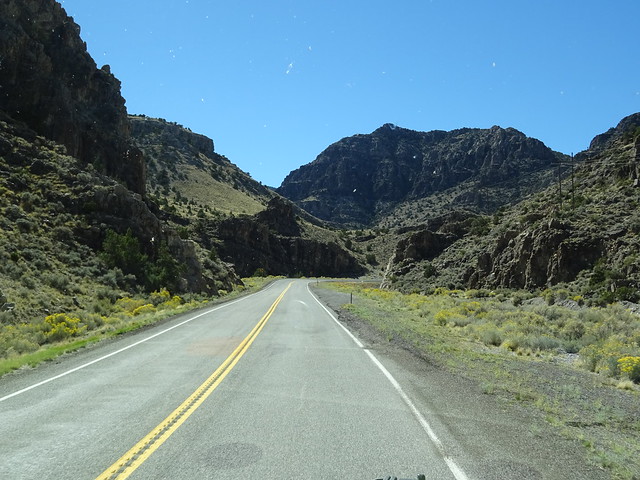 But for the most part US-50 lived up to its nickname, “The Loneliest Highway in the US.”  If you follow the pavement in the picture below you may be able to see in the distance that the pavement lightens a bit.  That’s the state line between Utah and Nevada.  The town of Baker is at the base of the mountains. 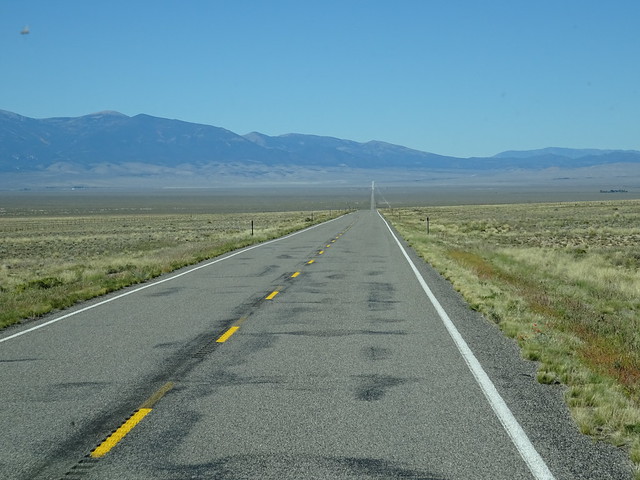 Bright and kind of early the next day we were in the Jeep heading into the park for some hiking.  Great Basin is one of the least visited national park, so we were not surprised when we didn’t see another car on the 16 mile ride up into the mountains to the trailhead.  The Aspens are in full color so the drive was one beautiful scene after another. 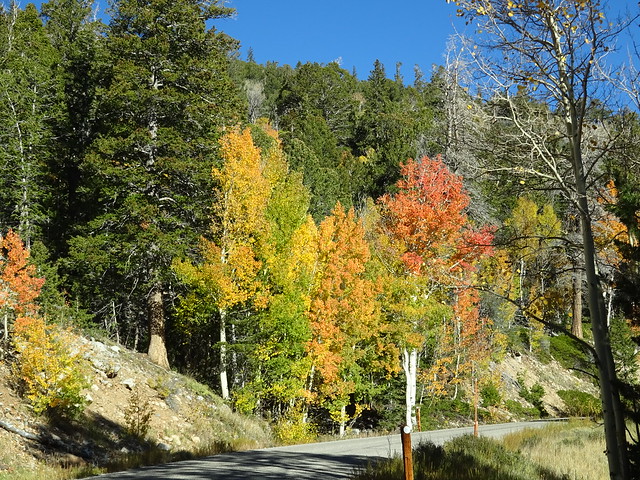 The town of Baker is at an altitude of 5,300 feet and the road in the park rapidly gains some significant elevation. 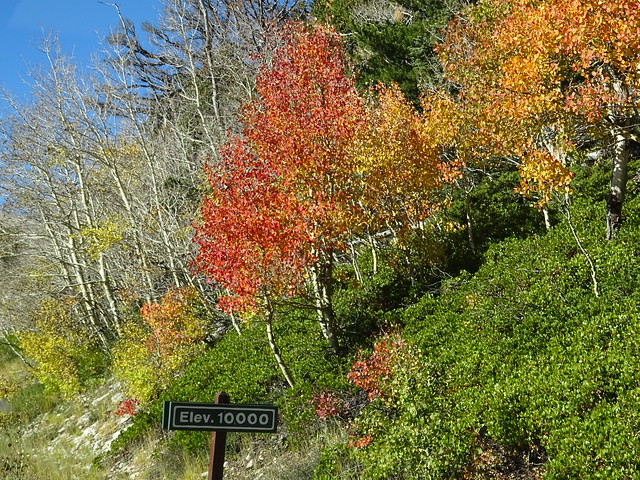 Our old hometown in Pennsylvania was at an elevation of about 950 feet.  When our son was a flight instructor, he did much of his flying at under 5,000 feet over Georgia.  When we parked the Jeep at the trailhead we were already at 10,161 feet! 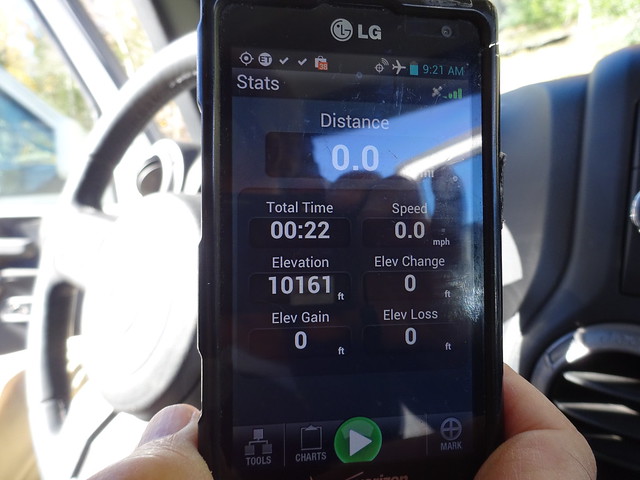 The trail began with a gradual increase in elevation through colorful stands of Aspens. 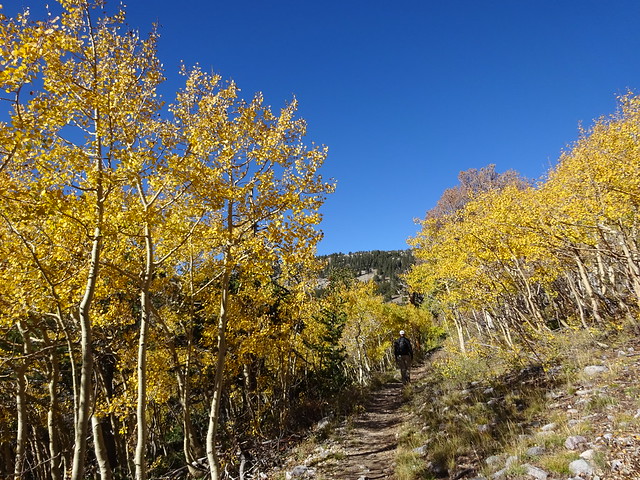 We were hiking the Wheeler Summit trail and we could see our target in the distance as we hiked.  This hike is the most challenging that we have tackled, so we were a bit concerned.  After all, Wheeler Peak (13,065ft.) is the highest independent mountain in Nevada.  Wikipedia describes the hike this way:

“The Wheeler Summit trail is quite strenuous, and the altitude presents significant hazards for unprepared or inexperienced hikers.”

Were we prepared?  Are we experience?  We decided to do the hike, with the idea that we would turn around if and when it was necessary. 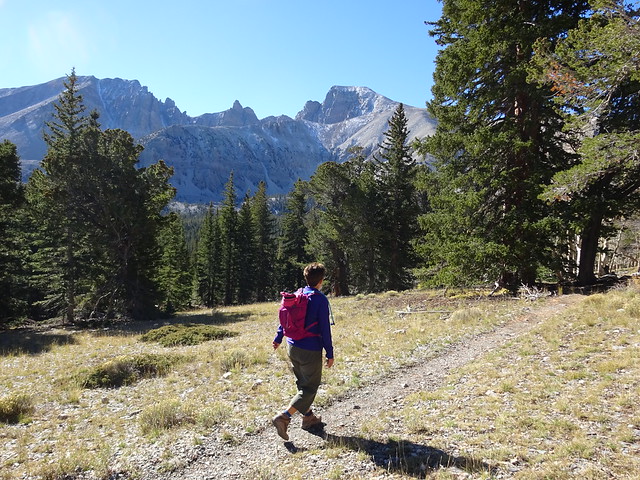 Our goal, Wheeler Peak is on the left

As we hiked up through the Aspens, we found the trail blocked by a couple of hungry locals. 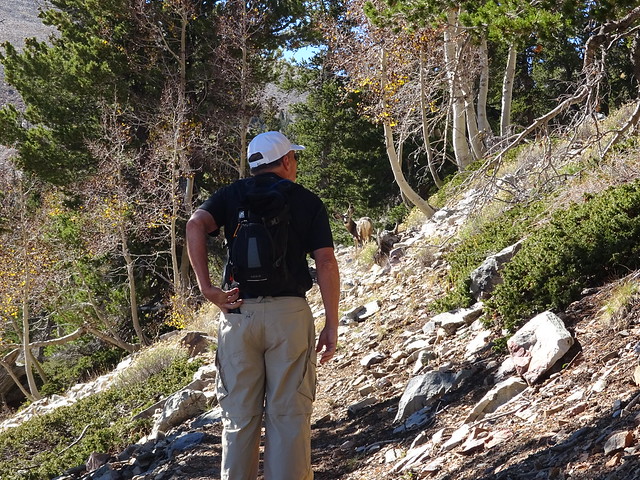 Can you see who is blocking the trail in front of us? 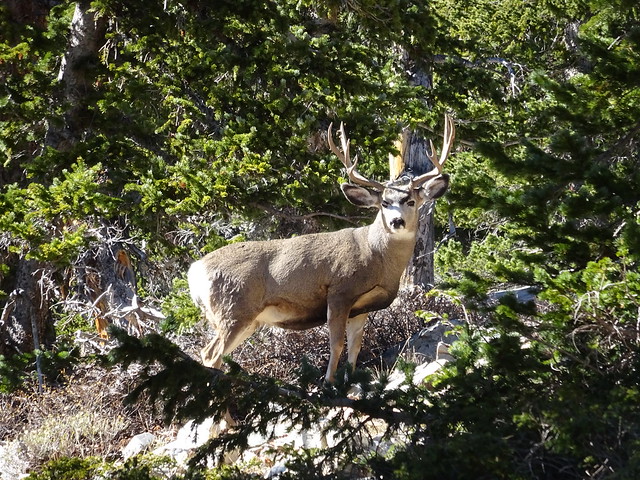 After moving slowly up in elevation for about two miles, the challenge began!  All vegetation disappeared and the trail went vertical over loose, broken rock called scree.  This loose rock is very difficult to walk over, making the trail even more of a challenge. 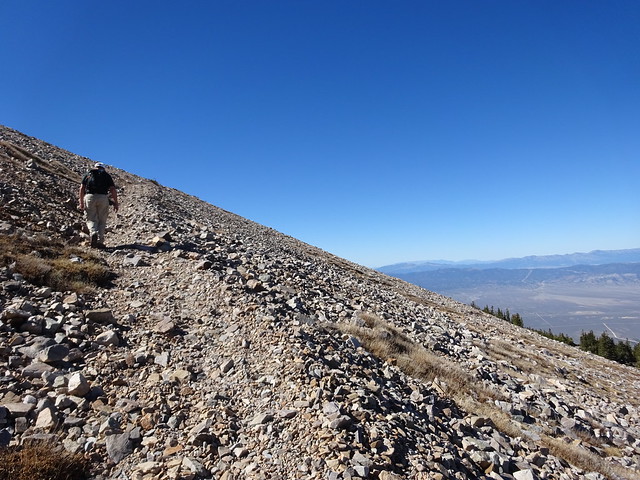 The views as we gained more elevation were impressive. 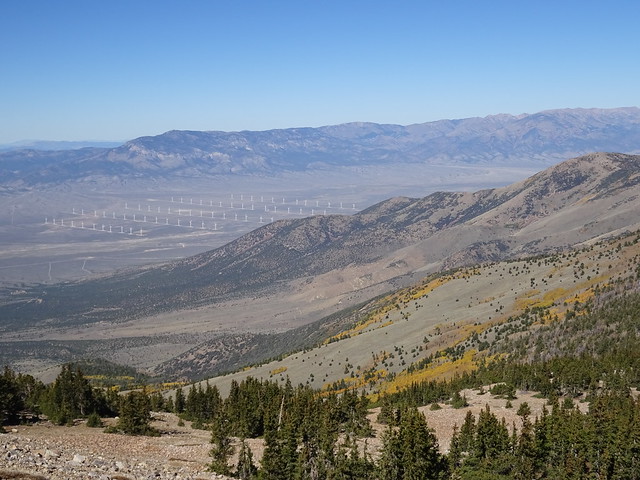 A wind farm in the distance

Did you ever fly across the west and see all the crop circles below you?  We were so high up that we had a view similar to an airplane. 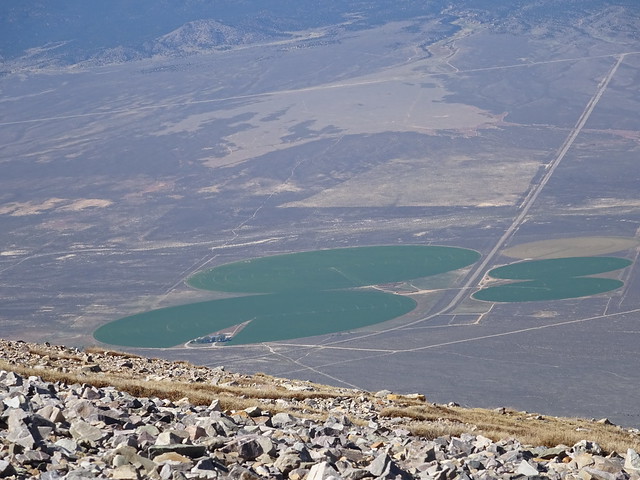 As we crossed 12,000 feet the trail just continued upward over the loose gravel. 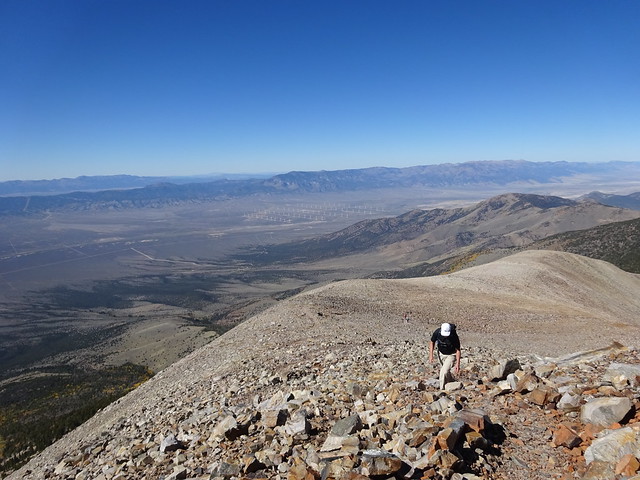 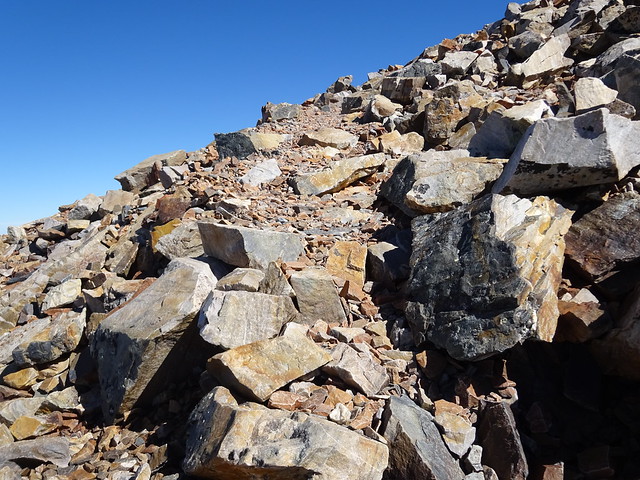 A close-up of the trail

At 12,500 feet we came to a small level area where we ate lunch and evaluated our situation. 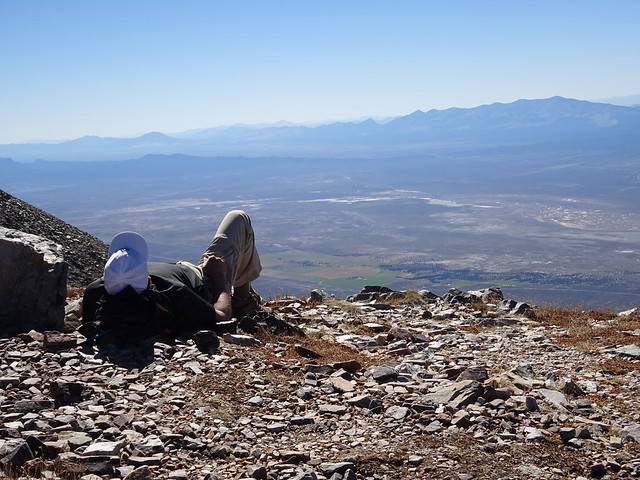 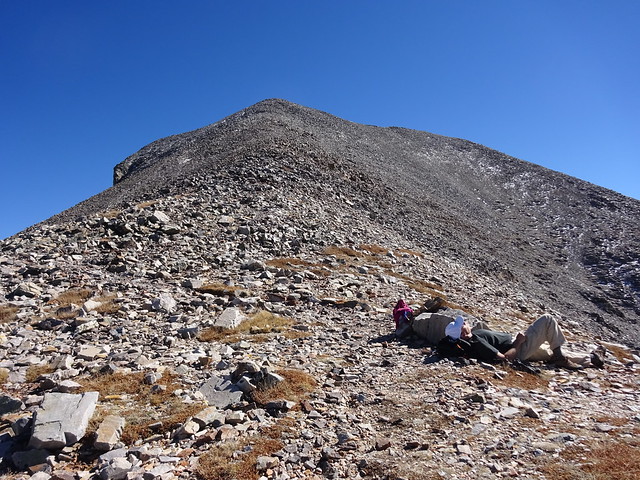 We talked with a couple of hikers on their way down and found that just above us the trail was covered with snow and ice.  Hiking up a very steep, rocky trail on ice with shaky legs from the rocky trail and lungs screaming sounded a bit irresponsible, so we decided to head back down.  We haven’t hiked above 8,000 feet yet, so this altitude was extremely challenging.   As we made our way back down the two miles of steep, rocky trail, we knew we had made the correct decision. 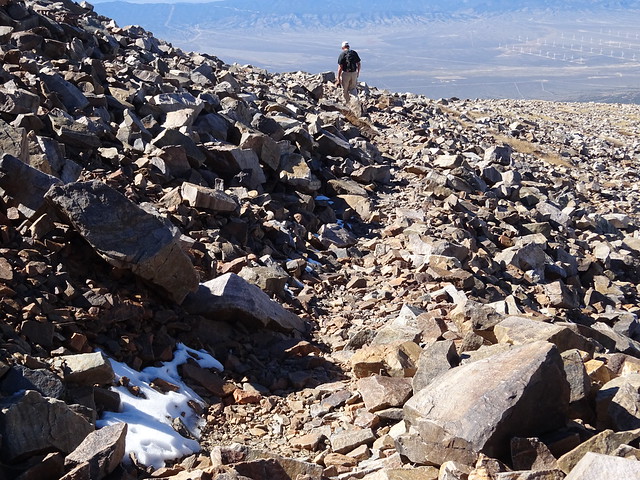 As we hiked back into the Aspen forest we could look back and see the point on the peak where we turned around. 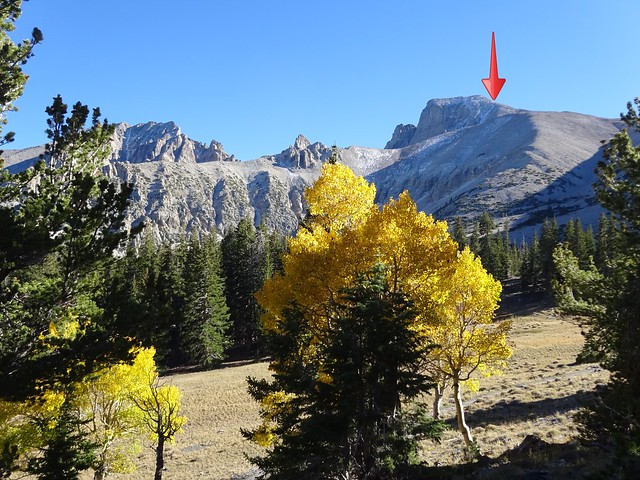 Along the trail we observed a flock of wild turkeys moving through a meadow. 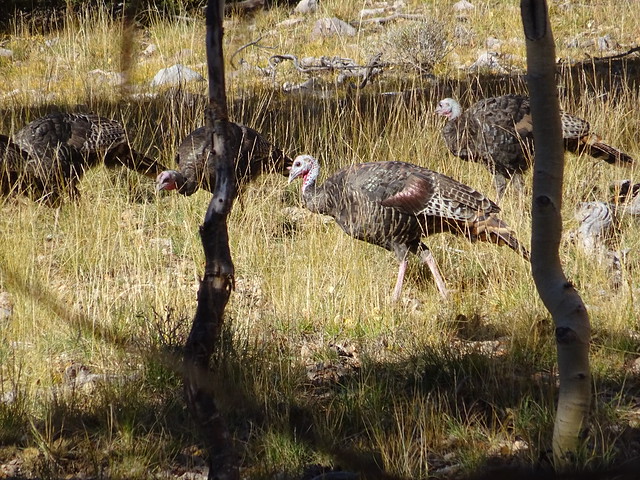 After a long, strenuous hike, the nimble hiker was in no shape to prepare a meal so we decided to visit the only restaurant open in Baker, the LectroLux Cafe.  This past September Yahoo Travel included it in its list of “Restaurants in the Middle of Nowhere — That Are Worth the Trip” .  So how bad can it be?  Well, let us tell you.  The dining area only has three booths, a large table for six, and a short bar with four stools.  As we entered, the server said we could share a booth or table with one of the couples already seated as they encourage their patrons to get to know each other.  We were a bit tired and not in a mood to get to know another couple so we opted to sit at the little bar.  The young man working as a server (husband of the young lady doing the cooking) was enthusiastic but not very competent.  He started by telling us they were out of many things on the menu but he would check to see what they did have.  We opted for one of the two selections available, a quesadilla, since that was what the other ten patrons were having.  After a wait of about a half hour we decided we couldn’t it on the stools anymore, so we asked for our order to go.  No problem, he said, as our order was just about to come out of the oven.  A half hour later we still had not received our order (a man who came in after us had his!) so we decided it was time to leave.  Appparently our waiter and his wife, the cook, were not too concerned, as they continued talking as we walked by them on our way out the door!  So much for the Yahoo Travel rating.

Oh well, it was back to the motorhome for some snacks, football, and an early bedtime, as the nimble hiker has another exiting hike planned for tomorrow.