Johnston Canyon and the Ink Pots

Posted on September 24, 2014 by placestheygo

After many days of hiking, the nimble hiker finally agreed to a day off.  So we decided to just check out some things near the town of Banff.  One of the distinct features of the town is Tunnel Mountain, which hovers over the town. 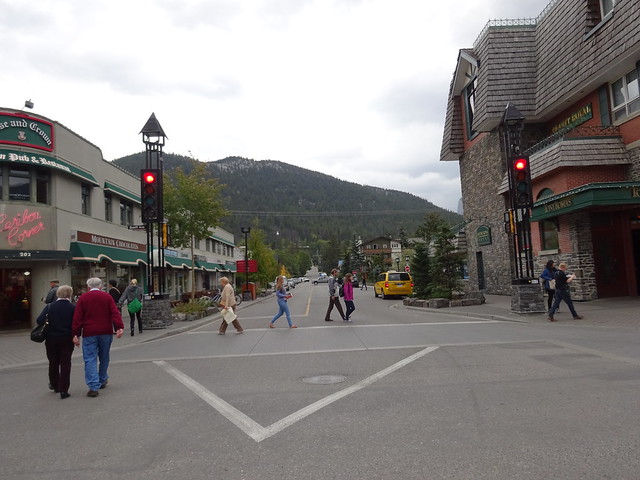 Tunnel Mountain from the main street in Banff

So where’s the tunnel in Tunnel Mountain?  Well, there is no tunnel.  When the railroad first came to the area one of the obstacles in the way was this small mountain.  One of the plans was to build a tunnel through the mountain, but plans changed and the railroad went around it instead of through it.  But the name stuck.

The trail to the top is only three miles round trip with an elevation rise of 900 feet, but its proximity to the town make it a popular hike.  Since King George VI and Queen Elizabeth hiked to the top of the mountain during their 1939 Royal Tour, the nimble hiker decided we should do it also, even on our day off.  So up we climbed, not letting the threat of rain impede us.  The summit is an open, rocky area and there is something of interest looking in all four directions. 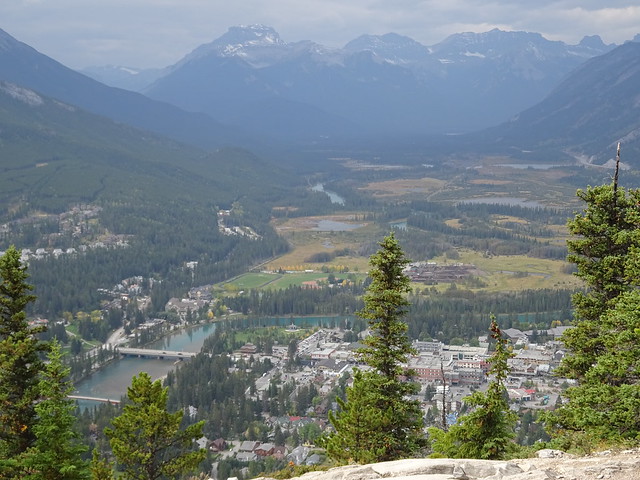 To the north is the town of Banff 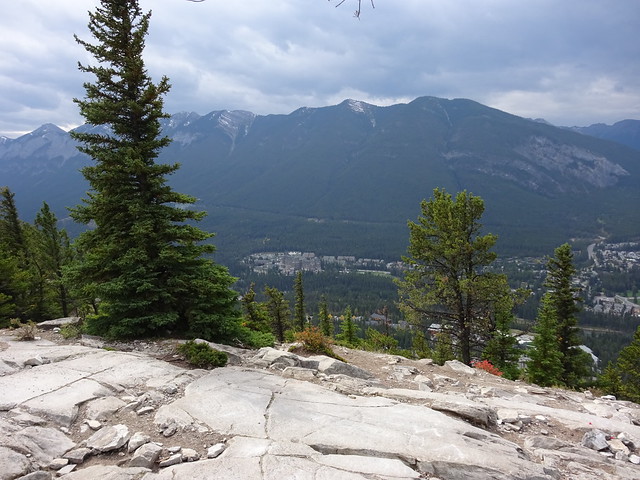 To the west is the famous Fairmont Banff Springs Hotel 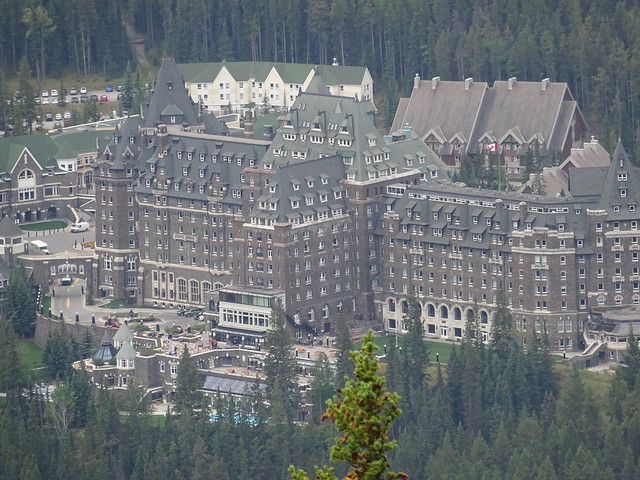 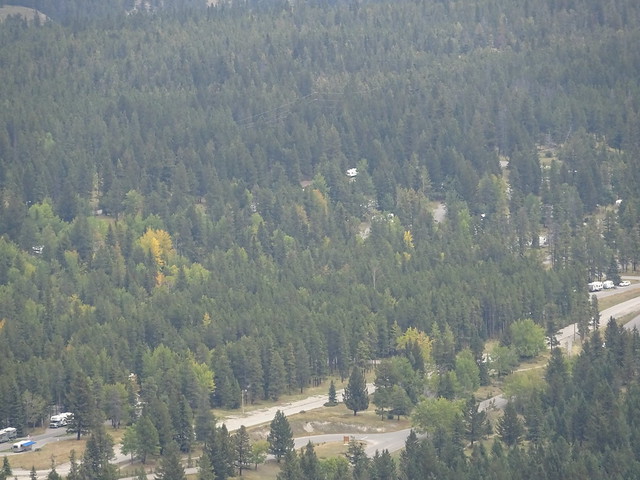 To the east is our campground. Can’t see it through the trees? Imagine what we got with our satellite dish! 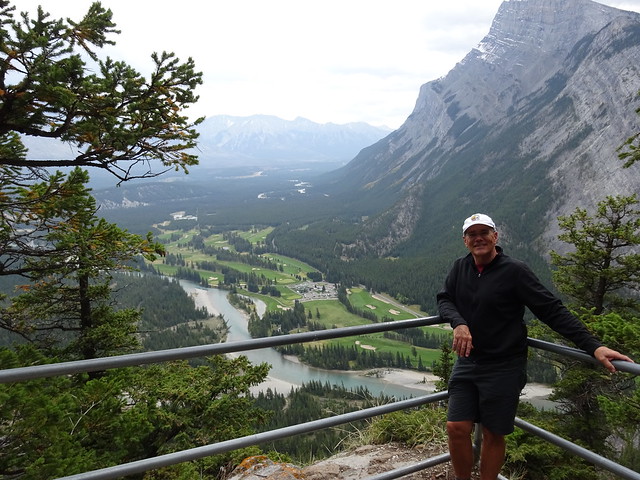 To the south is the Fairmont Banff Springs Golf Course. Hey Dave, we made you a tee time!

After a restful day off (with a climb up Tunnel Mountain), we headed around 30 miles to the north to Johnston Canyon, one of the most popular hikes in Banff National Park.  The hike is very popular because it offers something for all level of visitors.  There is a paved trail that leads up the canyon along a walkway built into the cliff.  In less than a mile you arrive at the Lower Falls, one of two main waterfalls in the canyon. 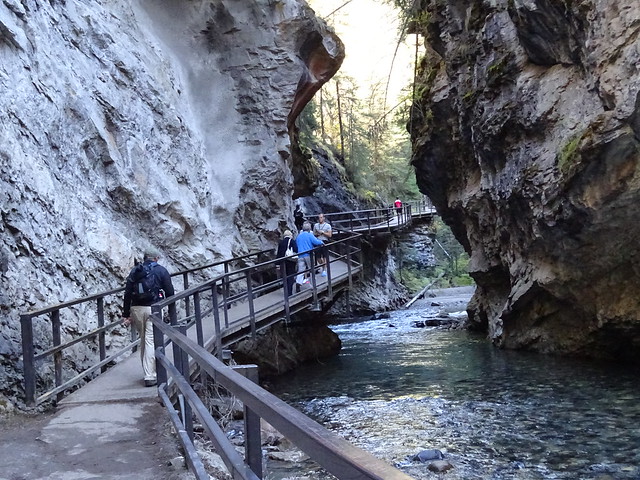 Walkway to the Lower Falls

The Lower Falls can easily be seen from the trail, but if you look at the picture below you’ll see an opening in the rock to the right of the falls.  Its a cave through the rock. 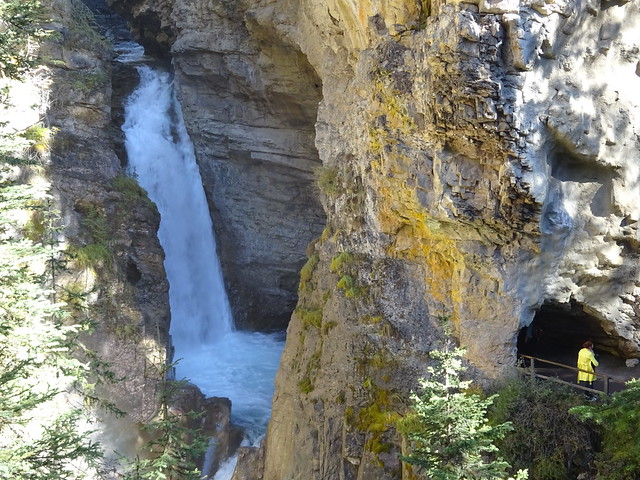 The Lower Falls with the cave on the right

After crossing a narrow bridge you can go through the tunnel for a close up look at the falls. 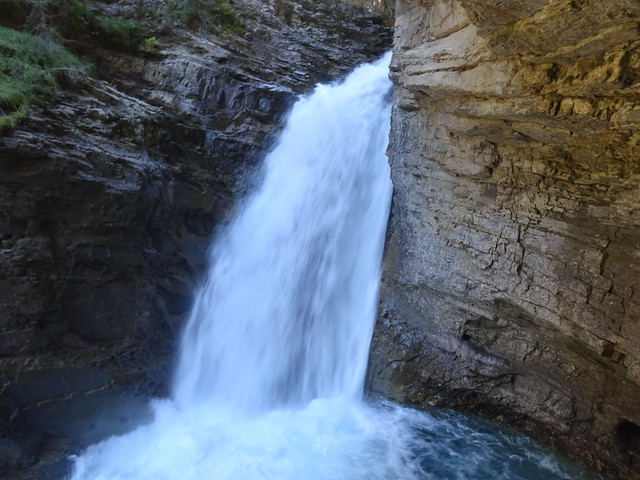 Up close with the falls after going through the cave

Some visitors turn around at that point but many continue up the canyon.  Along the way there are many smaller falls that are quite beautiful. 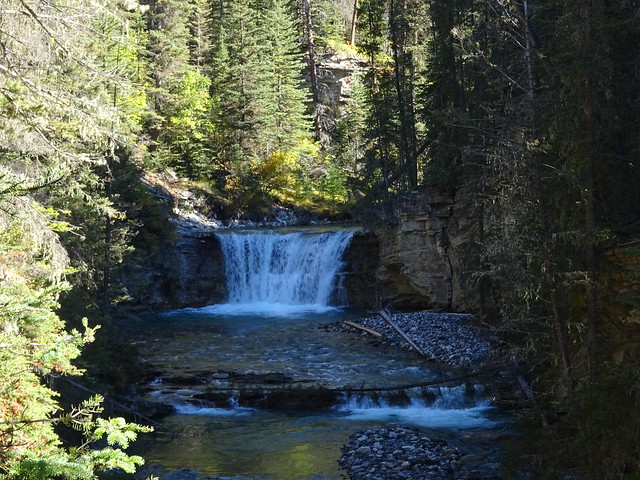 After gaining more elevation, the trail winds through the woods for a bit over a mile and a half up the canyon to the Upper Falls, 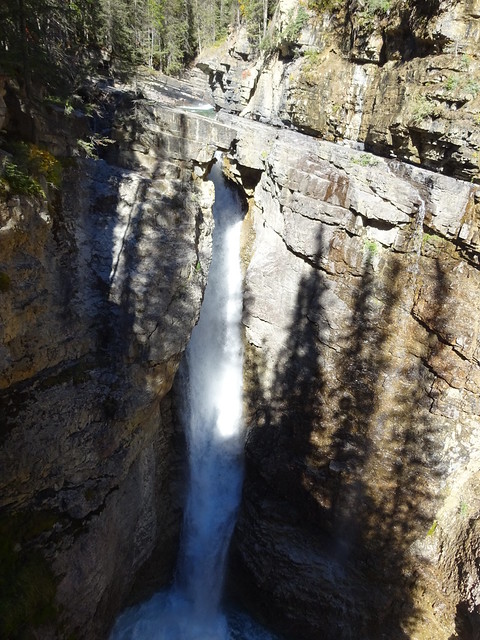 At this point the non-hikers turn around and make their way back down the canyon.  But to see one of the coolest sights of this hike requires another two miles up the trail, then back down into beautiful Moose Meadows, where you find a series of pools known as the Ink Pots. 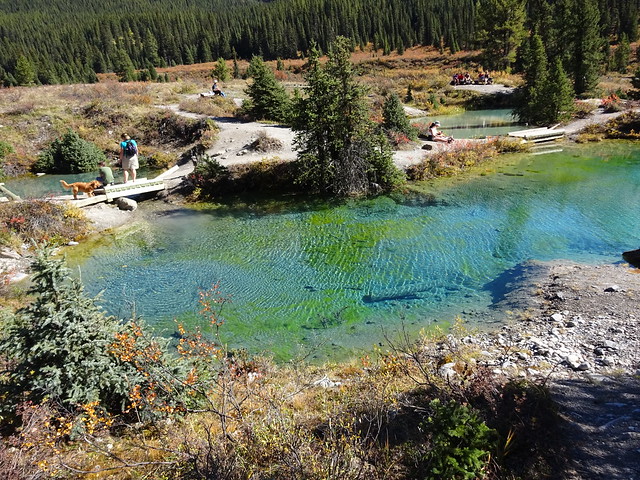 The Ink Pots are seven pools of clear water that are formed by water bubbling up from underground. 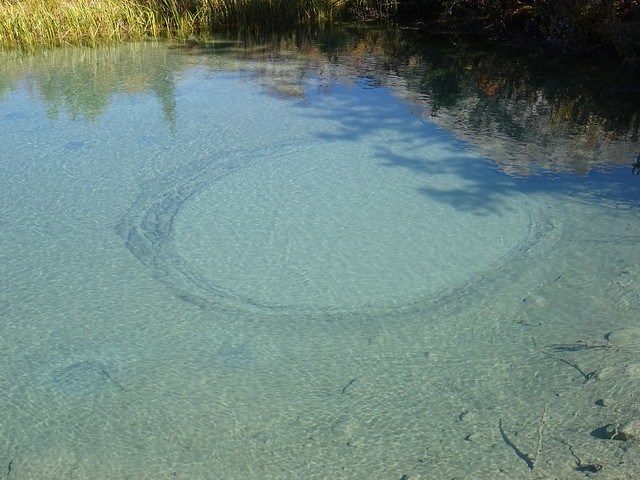 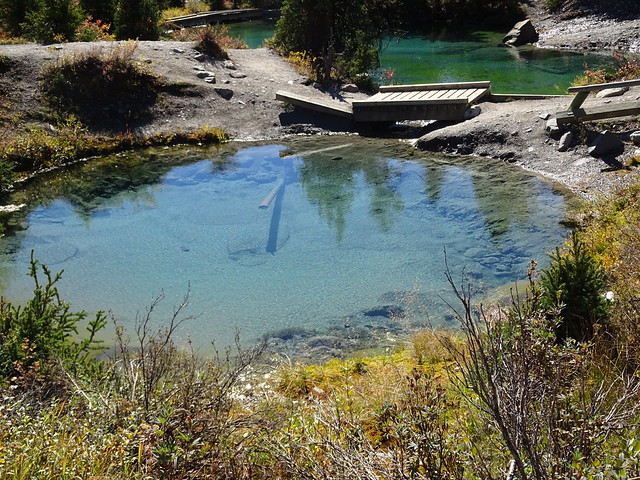 The Ink Pots are impressive but the views around Moose Meadows are pretty spectacular. 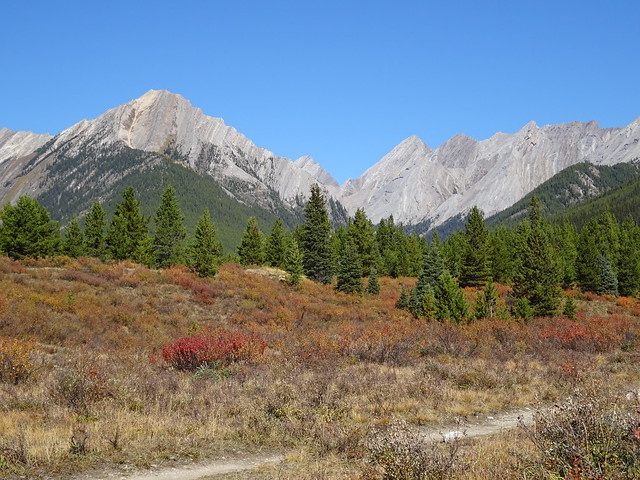 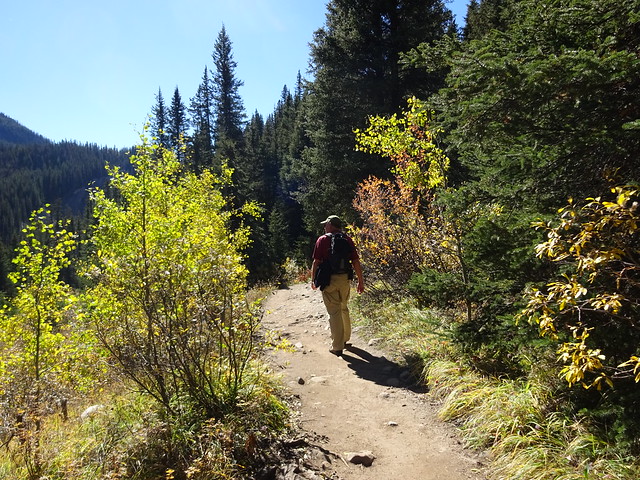 The trail through Moose Meadows

The foliage in Banff National Park has decided that Fall has arrived.  Colors along the drive back to the town were very impressive. 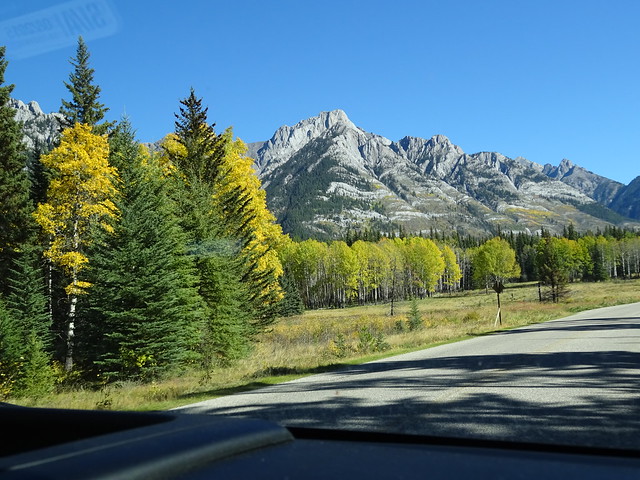 We arrived back in town and looked for a place to park so we could access some Wifi at one of the many coffee shops in town.  But the street was blocked by a local resident who had no regards for traffic. 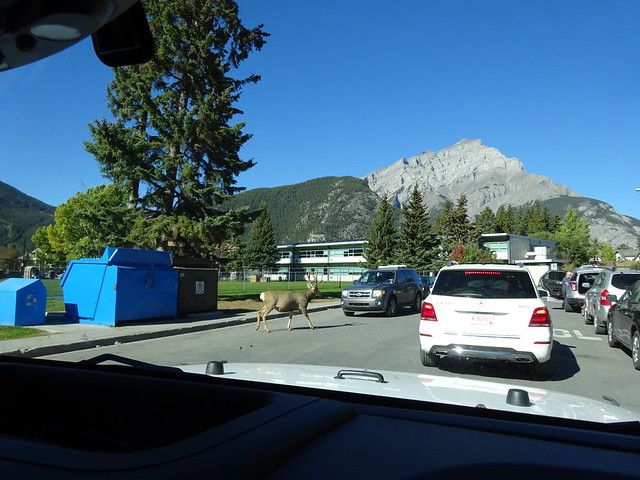 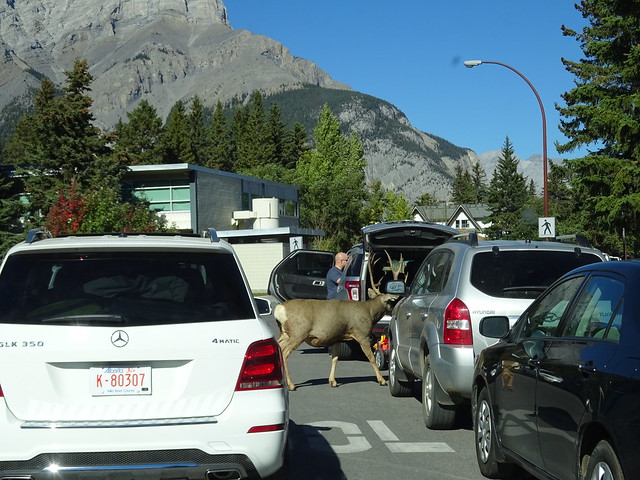 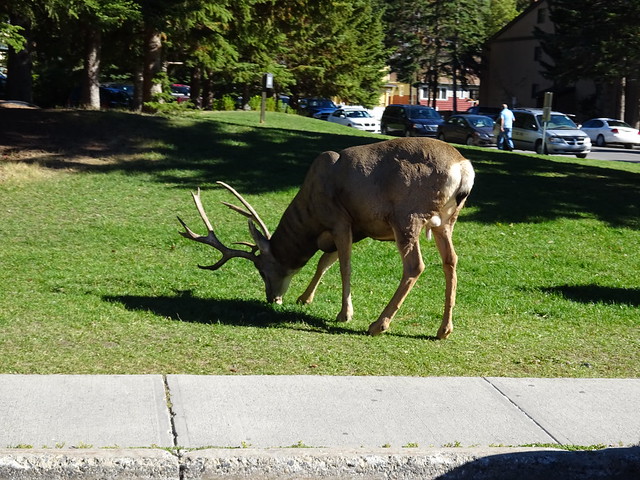 Our stay in the Canadian Rockies now comes to an end and we will soon begin heading south to the good old USA.  We have really enjoyed our visit to Alberta.  The cities of Calgary and Edmonton were very impressive.  They were clean, vibrant, and populated by very friendly people.  The National Parks in Jasper and Banff were spectacular and filled with exciting sights.  We were encouraged to visit the parks in September and are very glad we listened, for a number of reasons.  The most important reason is that school is back in session.  As a result the crowds are much smaller than they would have been a month earlier.  We can’t imagine what it would have been like just finding a place to park during the peak visitation season.  The other main reason this is a good time to visit is the weather.  While the snow and cold we encountered early in our visit to Jasper slowed us a bit, the snow on the mountains added to the beauty of the area.  And the cool weather made for very comfortable hiking conditions.

20 Responses to Johnston Canyon and the Ink Pots