Plain of the Six Glaciers Hike

Posted on September 22, 2014 by placestheygo

One of the most highly recommended hikes in this area is in the Lake Louise area, about 30 miles north of Banff.   The hike is to the Plain of the Six Glaciers, a flat area surrounded by glaciers that can be seen way in the distance in the picture below.  The hike begins along the shore of this beautiful lake where you can hike the first part of the trail along the lake, or combine the hike with another trail up the hillside to Mirror Lake. 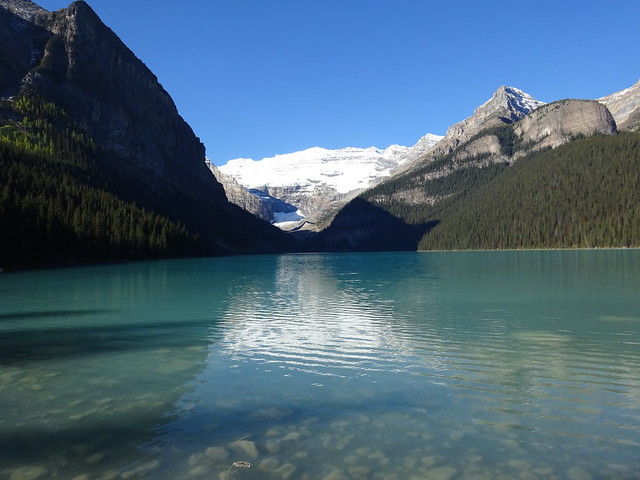 We opted to climb up the side of the hill to the lake, located just below a small round mountain called the Big Beehive. 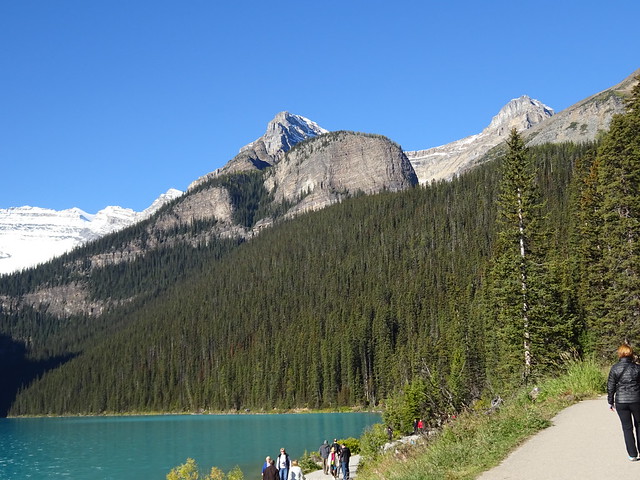 The Beehive sits above Lake Louise

The hike up to Mirror Lake was a bit steep, but the trail was wide and smooth. 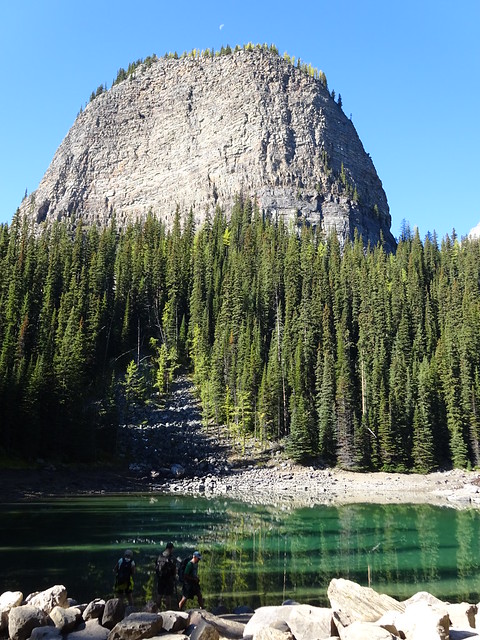 The Beehive over Mirror Lake 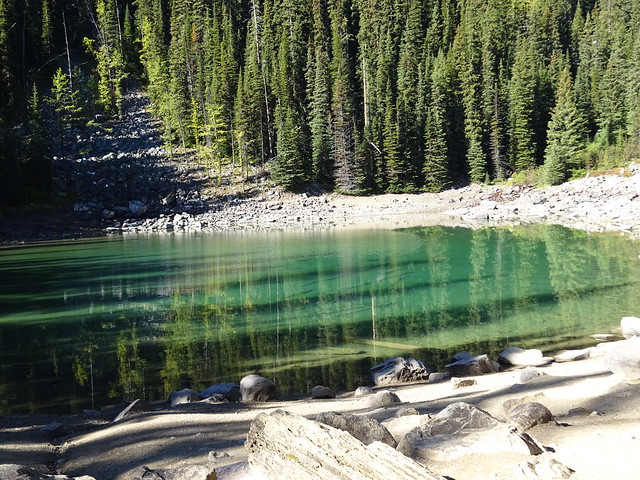 We continued on the trail west of Mirror Lake crossing the hillside above Lake Louise.  The trees blocked the view to Lake Louise, but we had great views of the surrounding mountains. 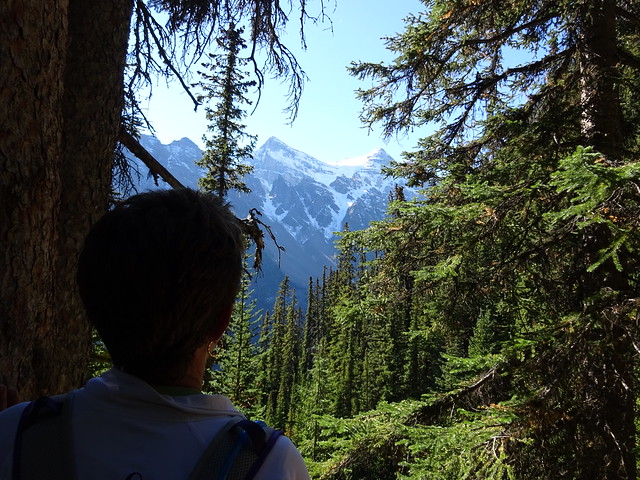 After a couple of miles through the trees we came to a great overlook with fantastic views of Lake Louise, the Fairmont Hotel, and the ski resort east of the lake.  Lake Louise is known for the beautiful color of its glacial water. 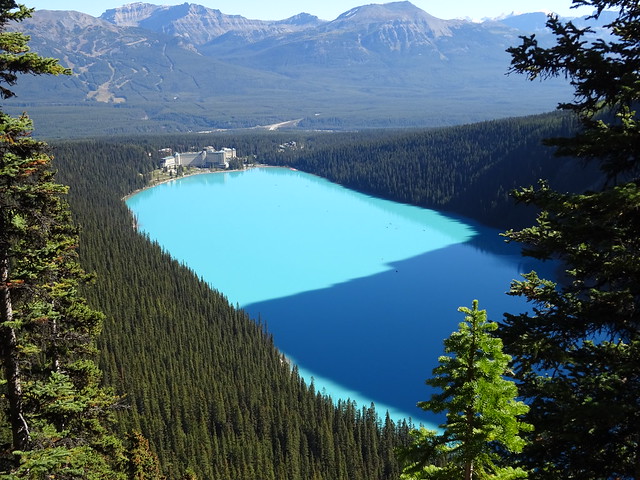 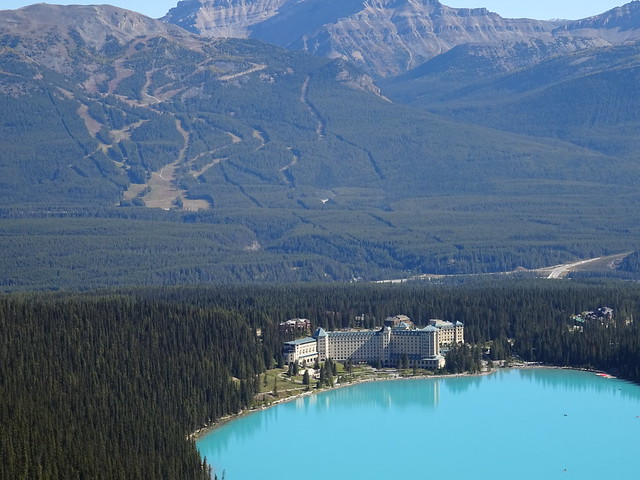 We continued through the trees until the trail entered an open meadow as it headed up toward the glaciers. 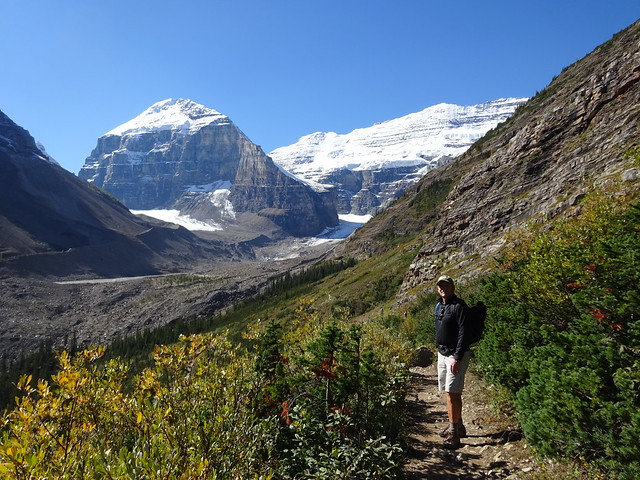 After a long climb up into the canyon you come to the Plain of the Six Glaciers Tea House.  The Tea House was built in 1924 by the Canadian Pacific Railroad and has a limited menu of drinks and sandwiches.  The menu has to be a bit limited as all supplies have to be packed in. 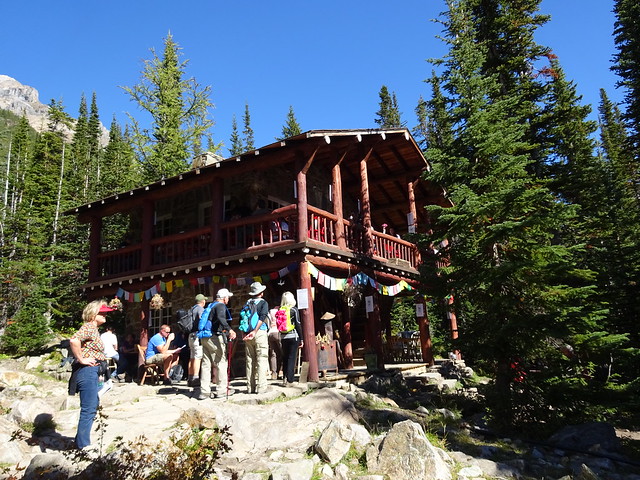 Plain of the Six Glaciers Teahous

We didn’t eat at the Tea House as all the tables were taken and we had packed our own lunch for a “lunch with a view” overlooking the glaciers. 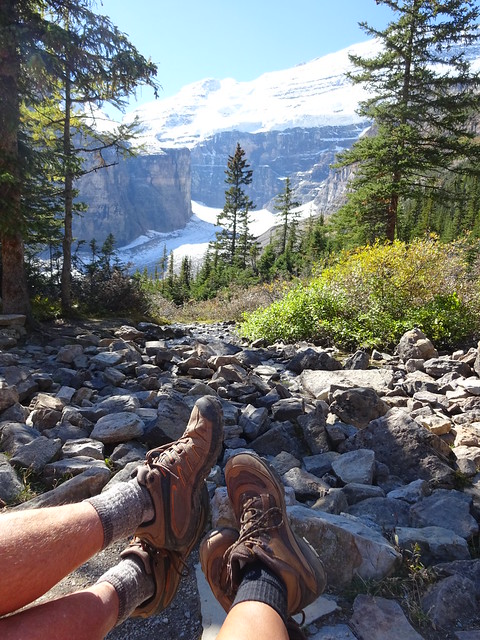 Many hikers turn around at this point, but if you’re legs still have a bit of energy left, the trail continues out and up over loose rock for another mile for a close up view of the surrounding glaciers.  Of course, the nimble hiker insisted we continue. 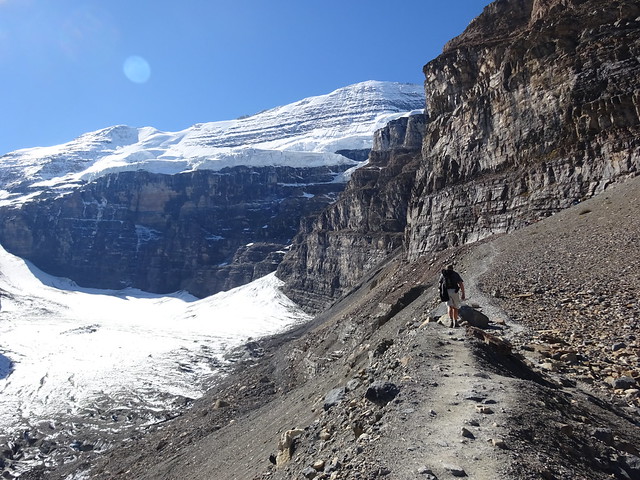 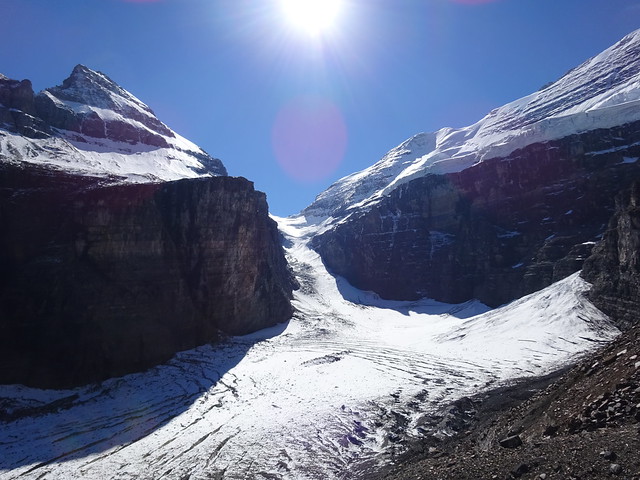 Below is a closer look at Abbot’s Pass.  The hiking route through the pass is known as The Death Trap, because of its exposure to avalanches and crevasses.  The pass is named for Philip Stanley Abbot,  who became the first mountaineering fatality in North America  after he fell in an attempt to make the first ascent of Mount Lefroy, just left of the pass, in 1896. 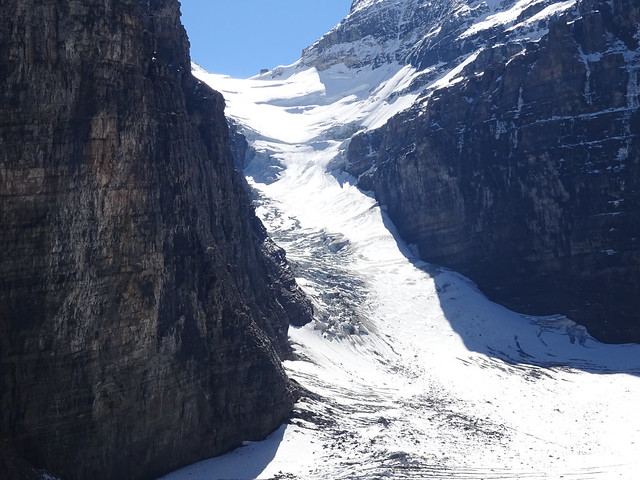 Look back at the picture above.  See the small black spot on the snow at the top of the pass?   The zoom picture below shows just what that black dot is. 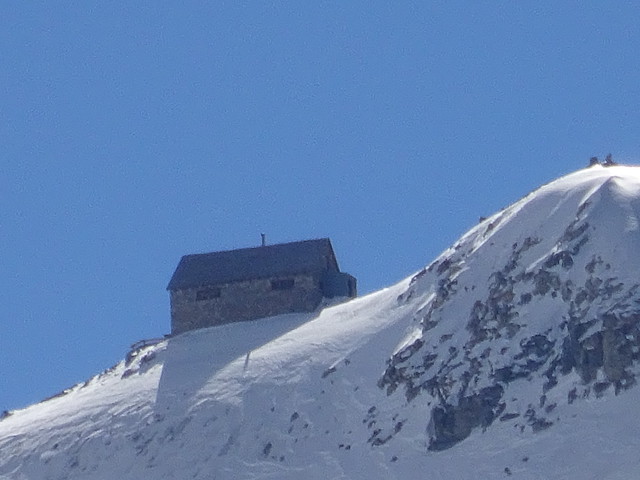 It’s the Abbot Pass Hut sitting at 9,598 feet right on the Continental Divide.  The hut was originally built in 1922 by Swiss guides working for the Canadian Pacific Railway to shelter clients attempting to climb the adjacent mountains Victoria and Lefroy.  Much of the construction material was carried from Lake Louise on horseback across the Victoria Glacier and winched or carried on guides’ backs up the Abbot Pass on a route known as The Deathtrap.

The hut is now owned and maintained by the Alpine Club of Canada, which has renovated it several times since. The hut was designated Abbot Pass Refuge Cabin National Historic Site of Canada in 1992, and, in 1997, a federal plaque was placed outside its front door.  Today the hut is often used as a base for alpine climbing on Mount Victoria and Mount Lefroy (both over 11,000 feet), and as a destination in itself for ambitious hikers.  One of the reasons for the popularity of the hut is that climbers can ascend both Victoria and Lefroy in a weekend.

Panorama of the Plain of the Six Glaciers

After a short break spent sitting on a steep bank of loose gravel looking at the glaciers, we turned our gaze back to the distant view of Lake Louise. 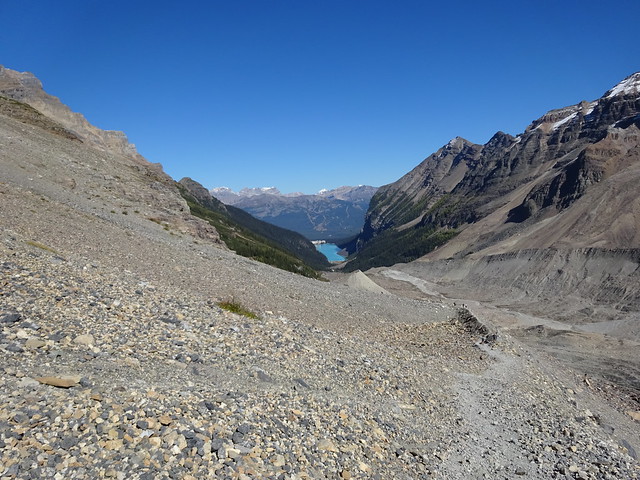 Then it was time to carefully make our way back down the loose gravel to the main trail. 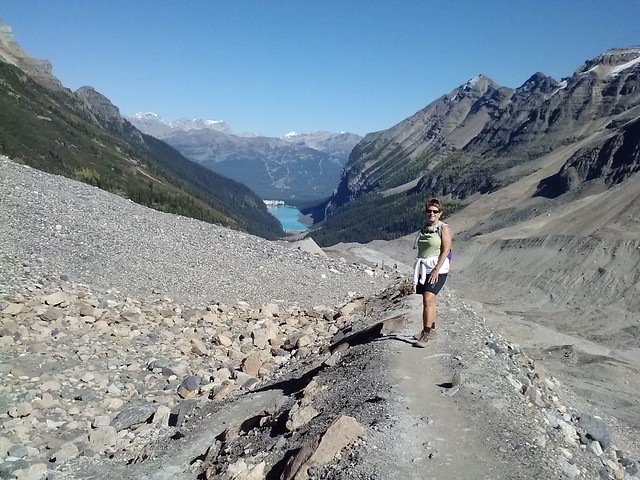 As we made our way back down, the views of Lake Louise continued to impress. 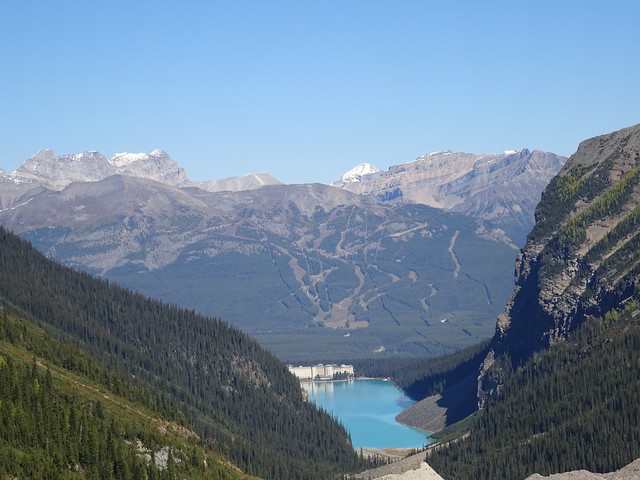 We finally made our way down to lake level, where we were able to see the cloudy glacial water close up. 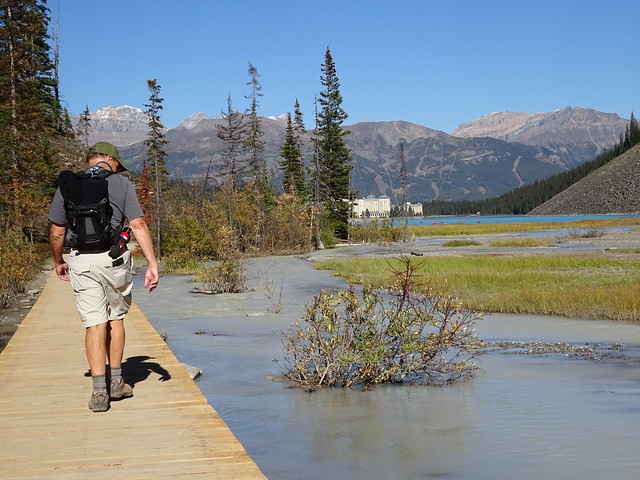 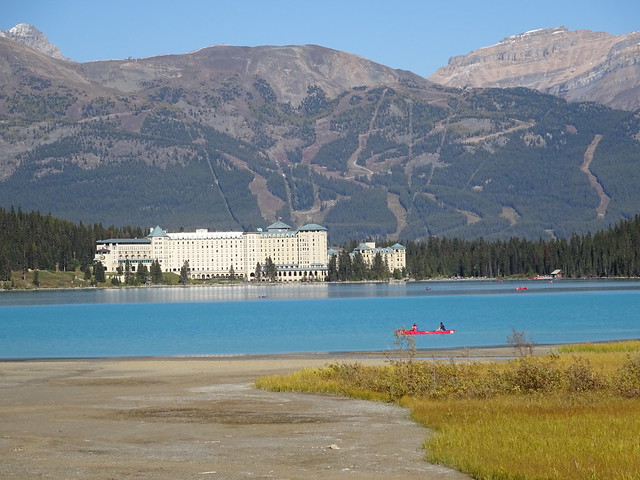 A final view of the Fairmont Hotel across Lake Louise

This is a great hike that has it all: distance, elevation, challenging terrain, and great views.  Don’t miss it if you are in the Lake Louise area!

15 Responses to Plain of the Six Glaciers Hike