Posted on September 18, 2014 by placestheygo

Just a few miles outside of Jasper is the scenic Maligne Canyon, formed by the rushing waters of the Maligne River.  The river is crossed by six pedestrian bridges as it moves through the canyon (OK, five, as one was a suspension bridge that is no longer there).  Bridge six is at the bottom of the canyon where the river is fairly wide and calm.  Bridge one is at the top of the canyon where the water flow is small as it drops into the canyon.  There is a parking area at the first bridge where bus loads of tourists can walk a paved trail crossing the first three bridges which are very close to each other.  We chose to park at the sixth bridge and hike up the length of the canyon from the bottom to the top. 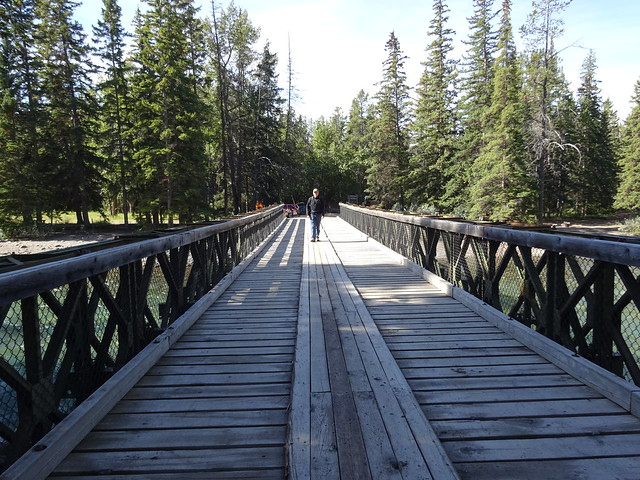 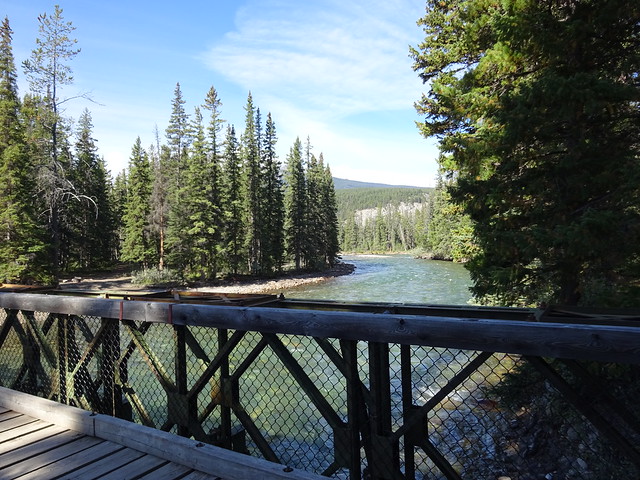 The Maligne River is wide and fairly calm at this point

The hike up the canyon is only about two miles, but the change in the river along the way  is very interesting.  If you read our blog post on Medicine Lake a few days ago you may remember that Medicine Lake appears to have no outlet.  The lake is very full during spring and summer but is almost empty in the winter.  Where did the water go?  The answer is into the Maligne River in this canyon.  The water from the lake travels through underground streams for about ten miles before re-appearing in the Maligne River.  As we hiked up the river we could see many spots where streams of water appeared from under the rocks.  At one point the trail left the main river to go around a small stream.  We thought we would cross the small steam over a bridge, but it turns out the trail led “around” the stream.  The stream just appeared from the base of the hillside. 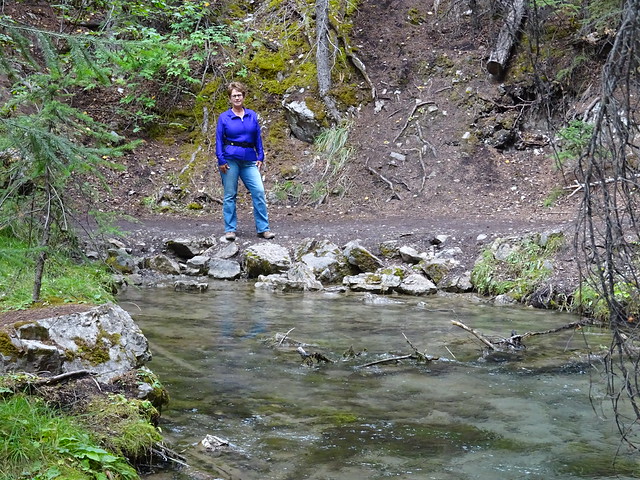 The stream “appears” from the hillside

As we moved up the canyon the river narrowed and the clear water became a beautiful aqua color.  The trail began to climb up the canyon wall away from the river so we scrambled down the side and made our way on the rocks next to the water.  Other hikers stayed on the trail, so we had this part of the canyon all to ourselves. 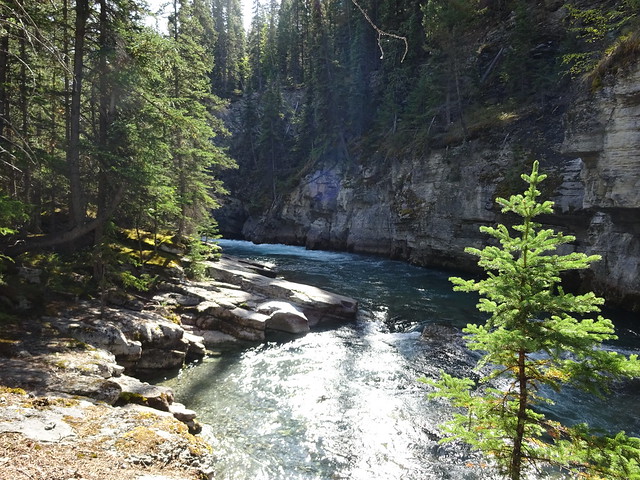 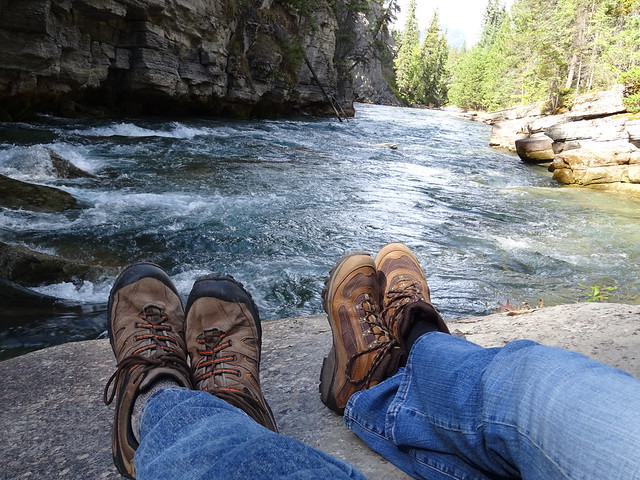 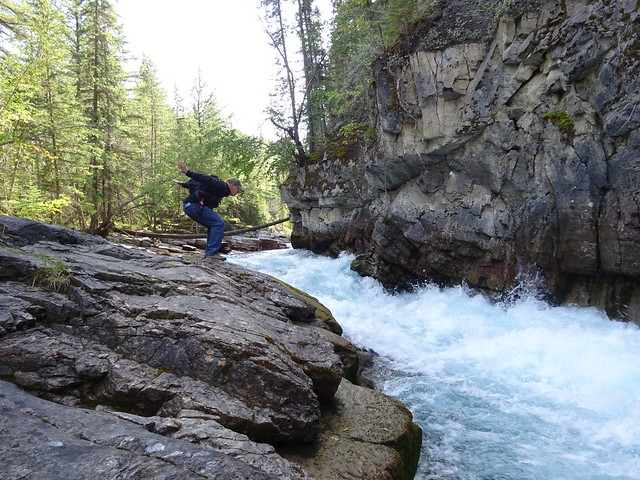 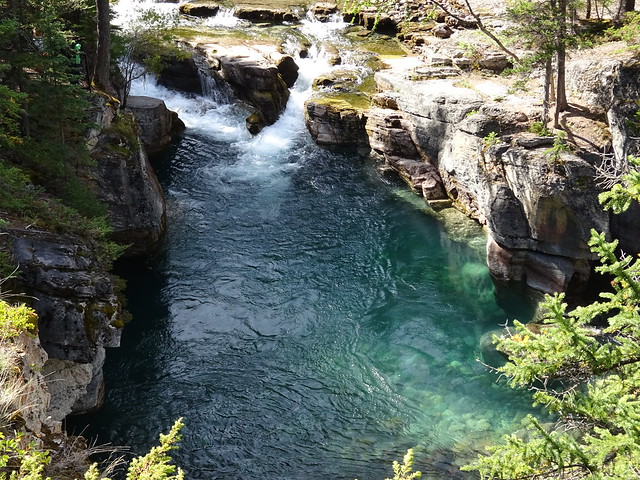 The water was clear and Caribbean blue

Waterfalls, small and large, constantly added water to the river.  Some were easy to see, as the one in the picture below.  Others were hidden as the water seeped out of the rocks. 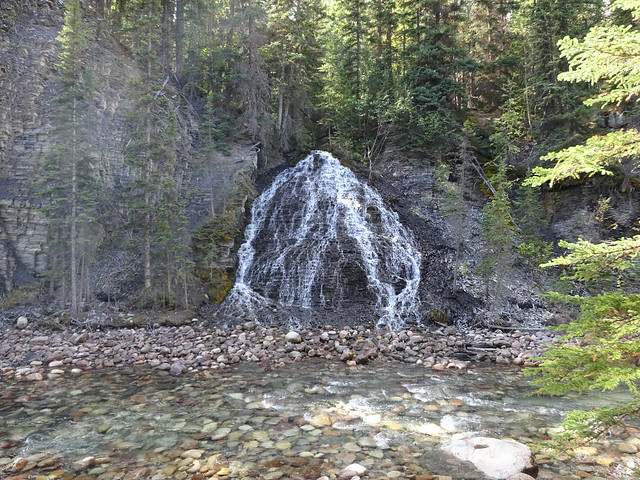 As we moved up the canyon the water flow lessened, but the canyon narrowed, keeping the current strong as it moved through the rock channel. 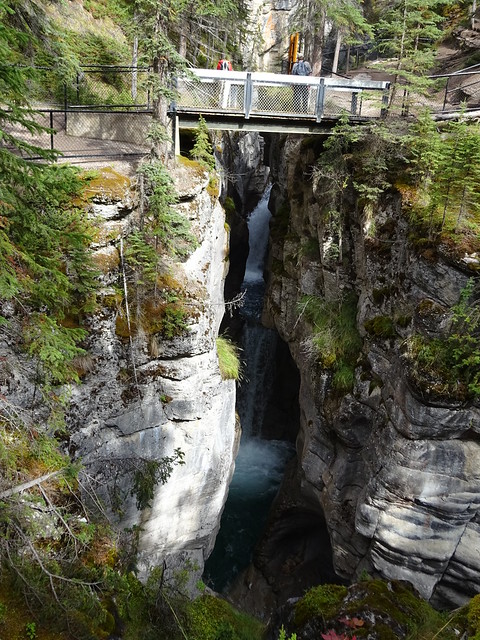 The low water volume at this time of the year revealed many dry channels and many potholes that are filled during the spring thaw. 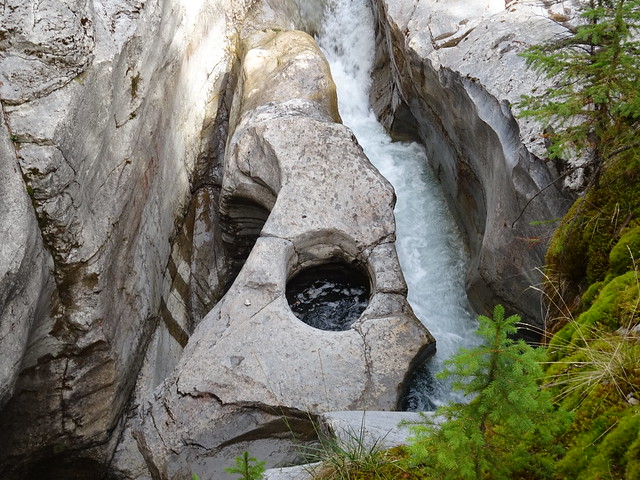 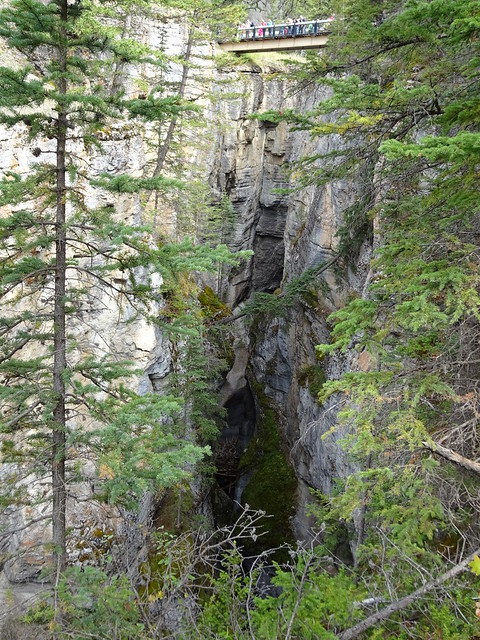 At the top of the canyon the water flows through a series of narrow channels in the rock just before dropping into the canyon. 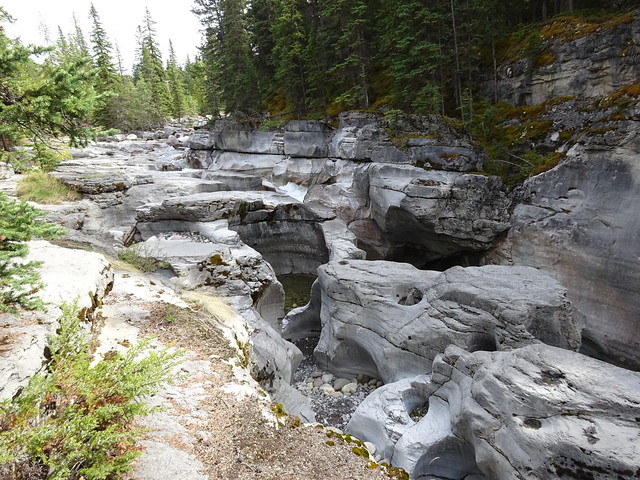 The top of the canyon is where the bus parking is, so it was very crowded with foreign tourists (oops, just remembered we are foreign tourists!).  So we just stayed there for a few minutes before beginning the hike back down the canyon. 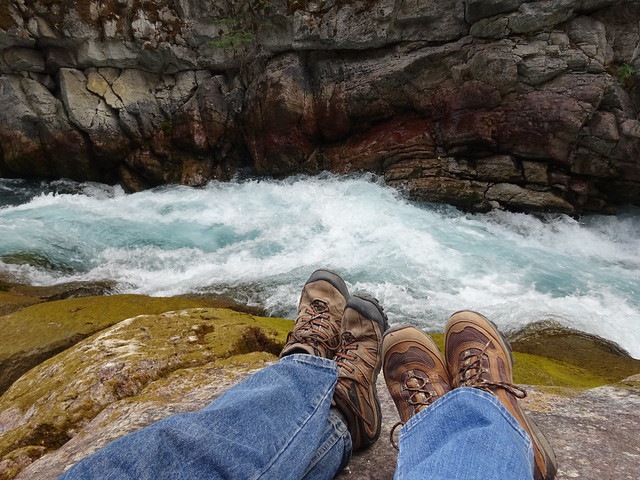 Snack with a view on the return hike

The Maligne Canyon is a great hike for all levels of hikers.  It is fairly short in length but has a great variety of scenery along the way.

OK, one more hike blog coming up from Jasper.  More on that later . . .