Lakes and Glaciers Near Jasper

Posted on September 15, 2014 by placestheygo

While the weather here has been cold and a bit overcast, we have taken advantage of some breaks in the clouds to get out for a couple of hikes.  The first is a popular one in Jasper NP, the Trail of the Five Lakes.  It’s a hike of about six miles around a series of small lakes. 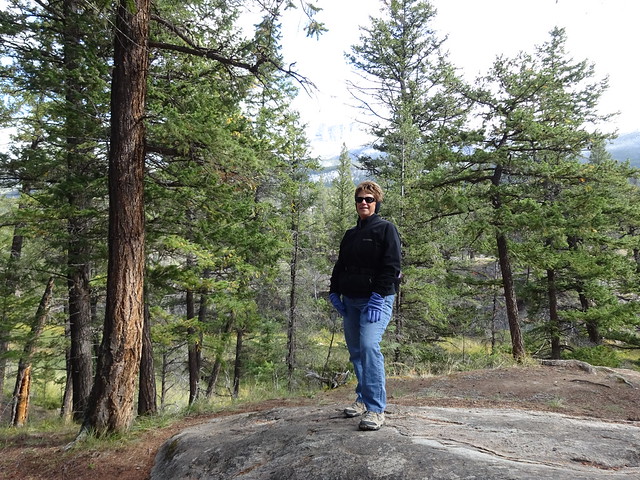 Bundling up for a September hike 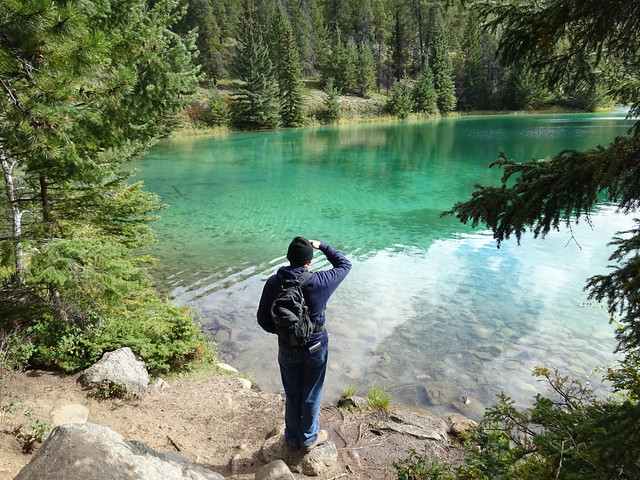 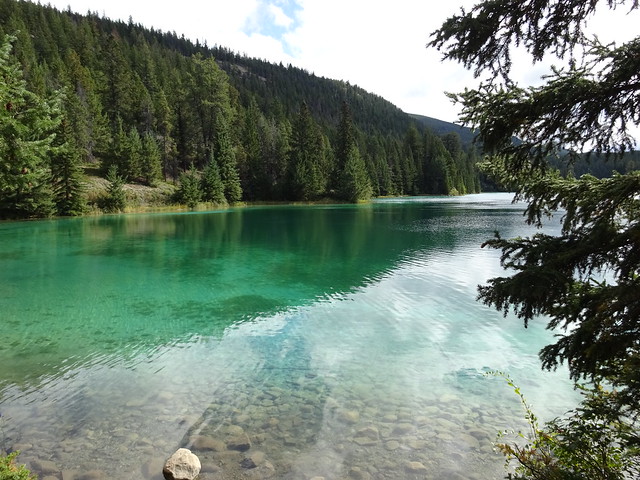 The glacial water in the lakes is quite beautiful 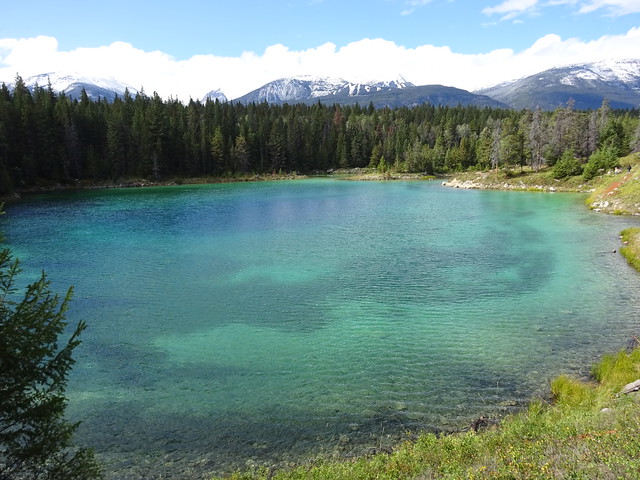 Hey Hector and Brenda, we found your chairs!  Blogger friends from Island Girl Walkabout  posted this picture during their visit to Jasper a few weeks ago and we quickly recognized it during our hike.  Unfortunately, it was too cold and windy to sit in the chairs for more than a few seconds.  We understand that Parks Canada places these chairs in various locations in Jasper National Park, but these are the only ones we came upon during our travels. 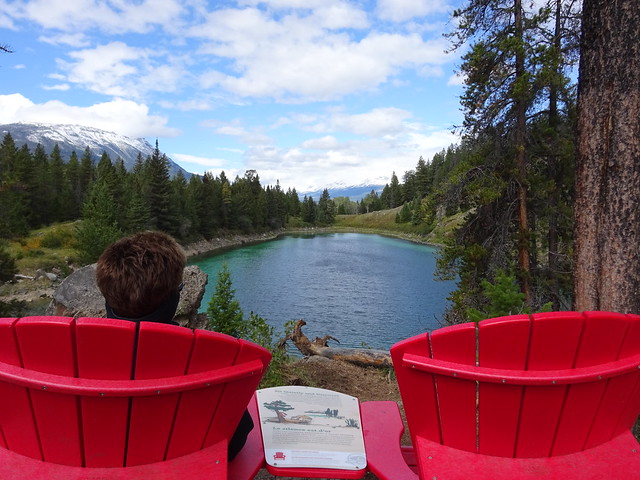 Later we drove a few miles further on the Icefields Parkway, then up a side road for about ten miles to check out the glaciers at the base of Edith Cavell Mountain.  Along the way we spotted a handsome group hiking across a rock face near the highway. 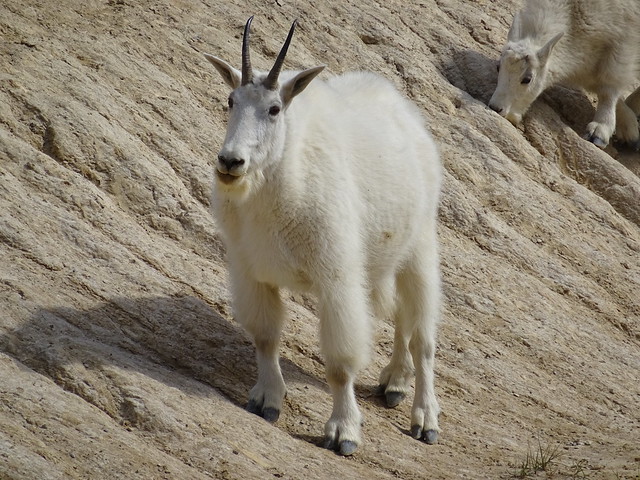 Edith Cavell Mountain is one of the highest in the Jasper area at 11,000 feet.  It is named after  a British nurse who worked in Brussels, Belgium during WWI.  She is celebrated for saving the lives of wounded soldiers from both sides of the conflict and in helping some 200 Allied soldiers escape from German-occupied Belgium, for which she was arrested.  She was subsequently court-martialed, found guilty of treason, and sentenced to death. Despite international pressure for mercy, she was shot by a German firing squad.  Many schools, streets, hospital facilities, and memorials throughout the British Commonwealth countries bear her name. 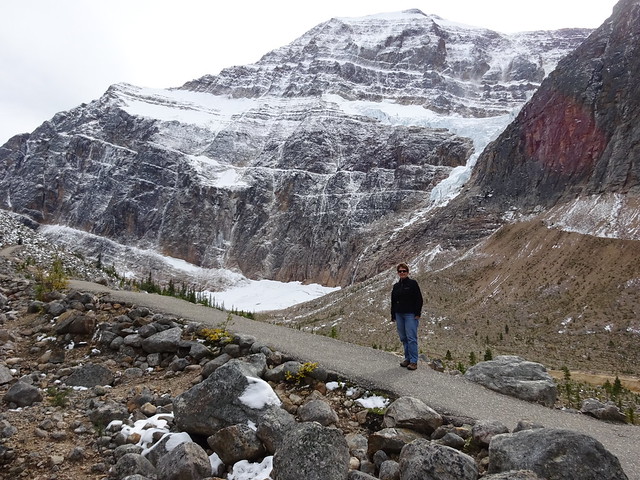 The path to the viewpoint

A short trail leads up to a viewing area where you can see glaciers along the face of the mountain.  In the picture below Angel Glacier is to the right, Cavell Glacier is at the bottom, and Ghost Glacier was, at one time, on the left. 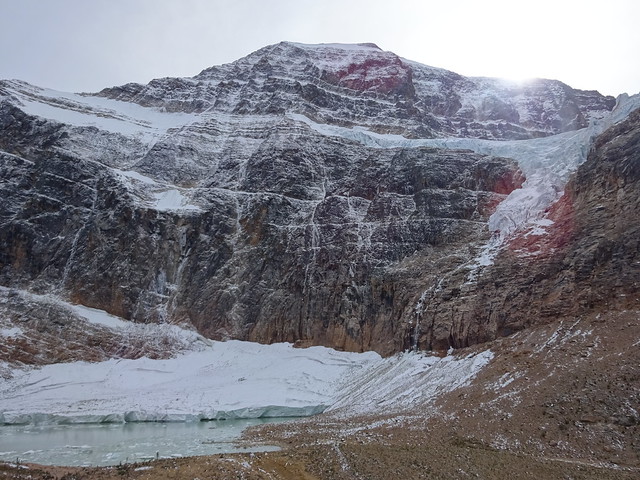 Angel Glacier takes it’s name from the “wings” spreading out to the left and right. 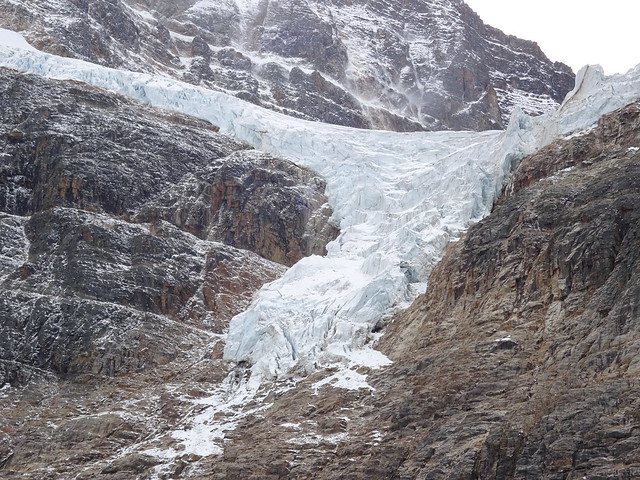 Up until a couple of years ago there was a glacier in the center of the picture below.  But in 2012 it collapsed into the small Cavell Pond below it.  Like dropping a bowling ball into a tub of water, the impact threw most of the water out of the pond, causing a flash flood below it that took out most of the road and parking area (they are still repairing it). 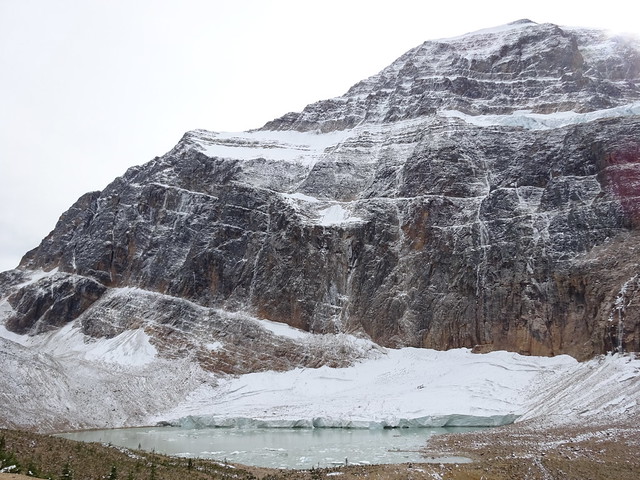 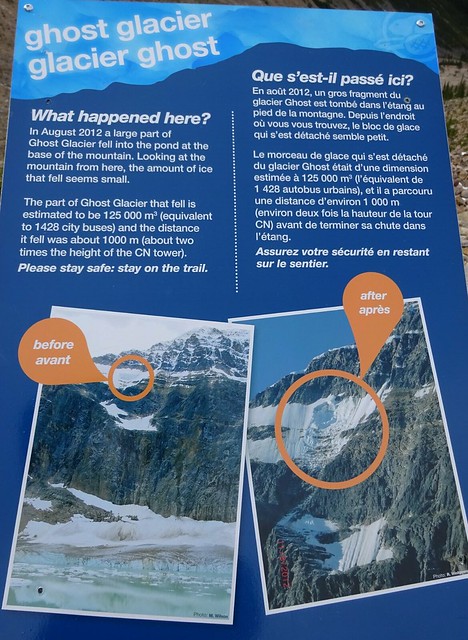 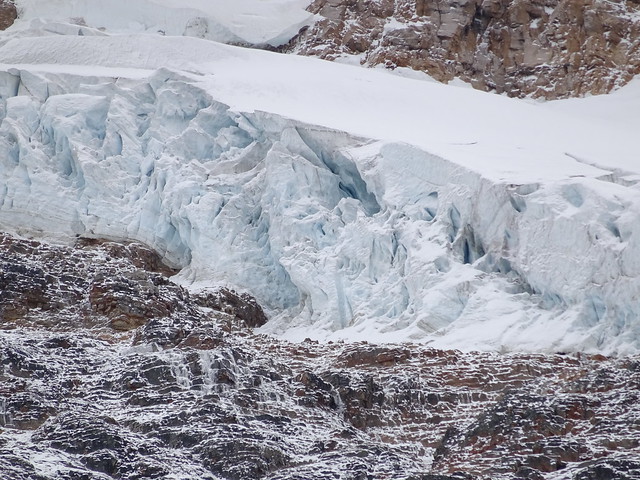 The thick ice of Angel Glacier

Our time in Jasper is quickly coming to an end.  But we have two more exciting hikes left to do before we head south.

24 Responses to Lakes and Glaciers Near Jasper