Posted on September 12, 2014 by placestheygo

The weather has continued to be unseasonably cold here in the Canadian Rockies.  One morning we awoke to a temperature of 24 degrees!  That’s a little too cold to do much hiking so we took a few scenic rides around Jasper.  As we left Whistler Campground lamenting the cold waiting for the Jeep to warm up, we passed the two tourists pictured below.  OK, our complaining became a bit pathetic.

Great day for a bike ride

We first headed up Maligne Canyon Road to check out some mountain views.  But it’s difficult to enjoy “mountain views” under a thick covering of clouds.  Oh well, the snow on the pines provided some beautiful winter scenery (but it’s only the first week of September!). 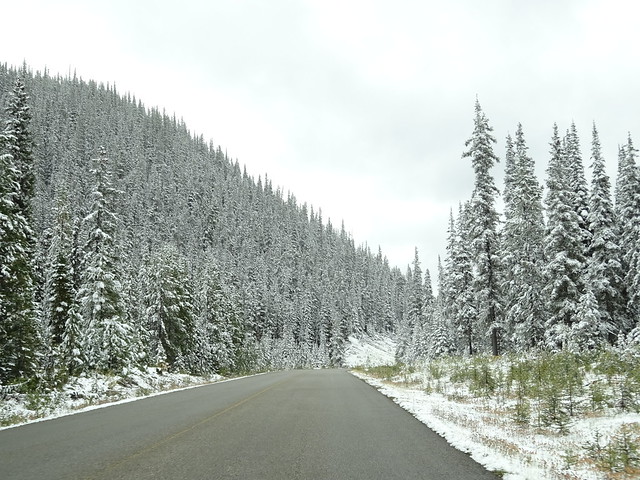 One of the reasons for driving up here was to check out Medicine Lake.  Summer visitors assume that Medicine Lake is a normal mountain lake, but it isn’t.  During the summer, glacier melt waters flood the lake, sometimes overflowing it.  In fall and winter the lake disappears, becoming a mudflat with scattered pools of water connected by a stream.  But there is no visible channel draining the lake – so where then does the water go?

The answer is, “out the bottom”, like a bathtub without a plug.  The Maligne River pours into the lake from the south and drains out through sinkholes in the bottom.  The water then streams through a cave system formed in the limestone rock, surfacing again in the area of Maligne Canyon 10 miles downstream.  This is one of the largest known sinking rivers in the Western Hemisphere and may be the largest inaccessible cave system anywhere in the world! 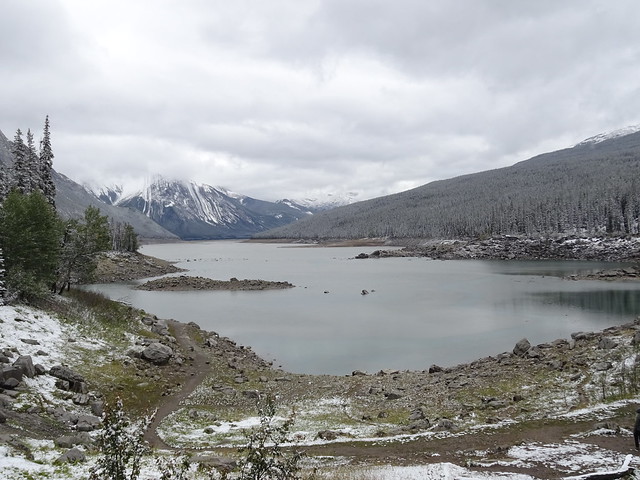 We hoped for many wildlife sightings along this road, but apparently animals don’t like late summer snow falls either and must have been home watching re-runs of Dr. Phil.  But we did spy the sheep pictured below feeding along the road. 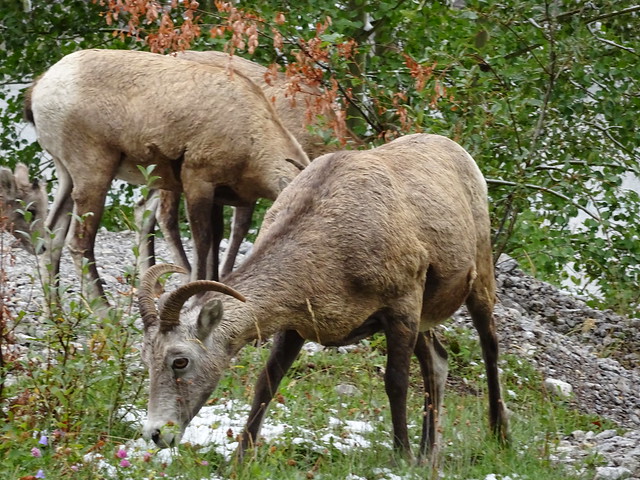 On the trip back down the road we passed the sheep again, but this time they were enjoying some quality time blocking traffic. 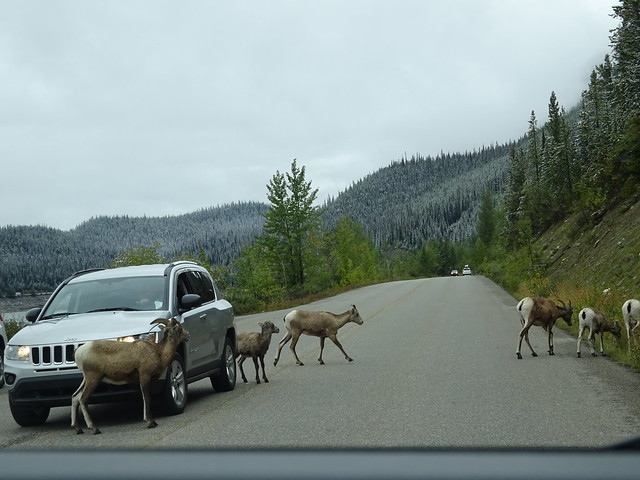 The next (cold) day we drove south on the Icefield Parkway to see what we could see.  Our first stop was for a visit to Athabasca Falls. 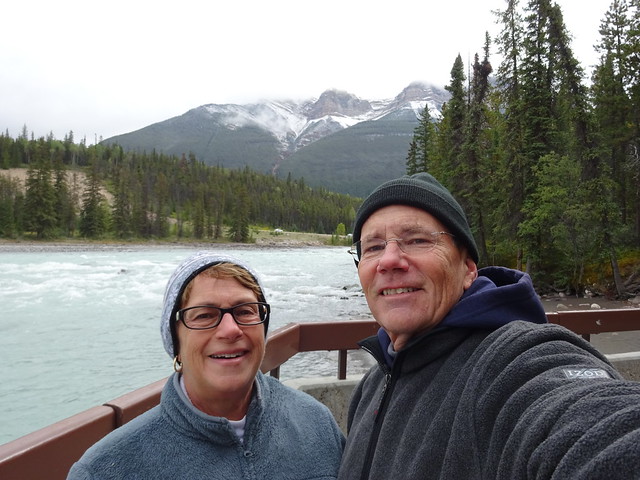 Two cold foreign tourists by the Athabasca River above the falls

Athabasca Falls is not known so much for the height of the falls (75 feet), as it is known for its force due to the large quantity of water falling into the gorge.  Even on a cold morning in the fall, when river levels tend to be at their lowest, copious amounts of water flow over the falls. 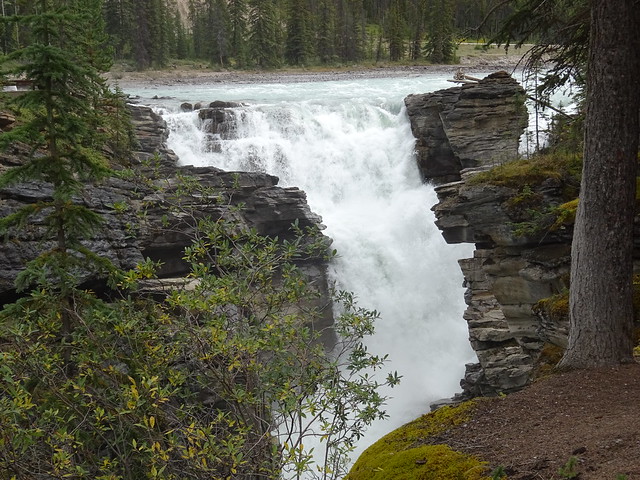 The river ‘falls’ over a layer of hard quartzite and through the softer limestone below carving the short gorge and a number of potholes. 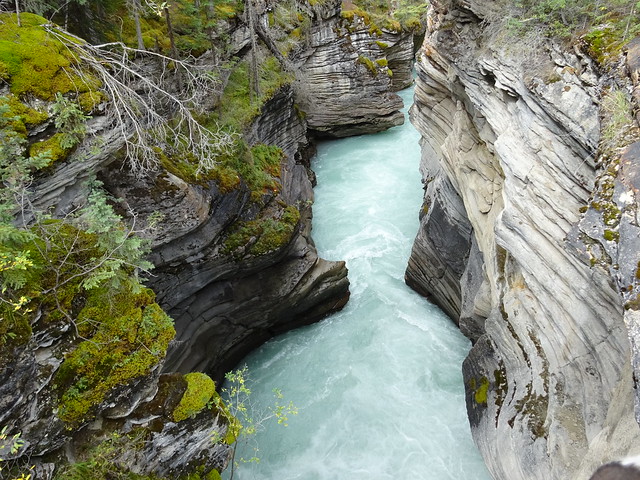 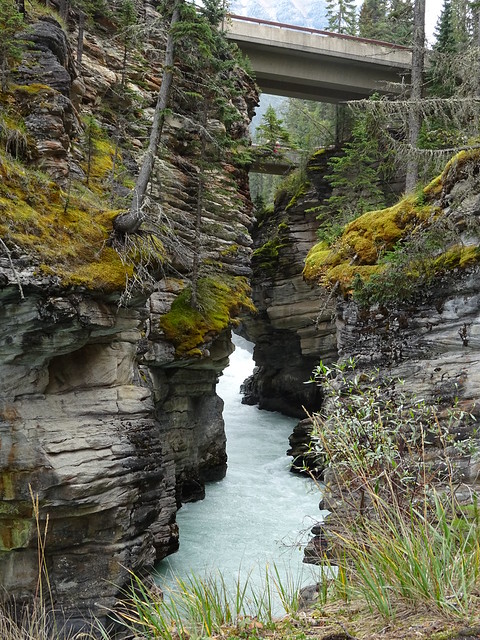 Over time the river has carved new channels through the rock and abandoned older channels.  One channel abandoned by the river is used as a walkway for views back up the falls. 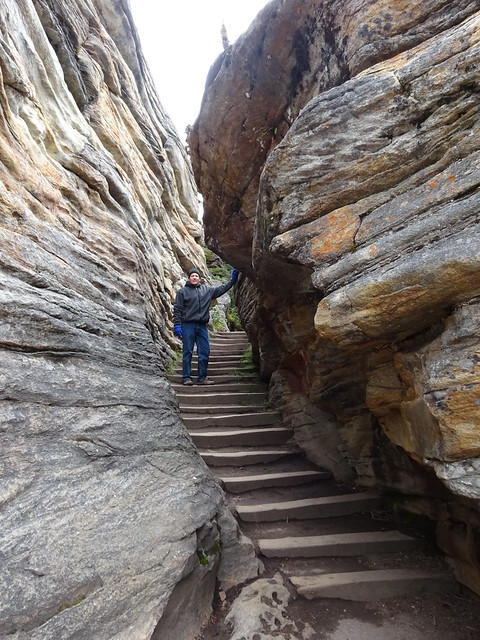 Since it was cold and windy we decided to stay inside the Jeep and continue down the Icefields Parkway another 30 miles to visit the Columbia Icefields Discovery Center.

The Icefields Interpretive Center stands across from the Athabasca Glacier.  It is used as a lodge and for ticket sales for sightseeing on the glacier. 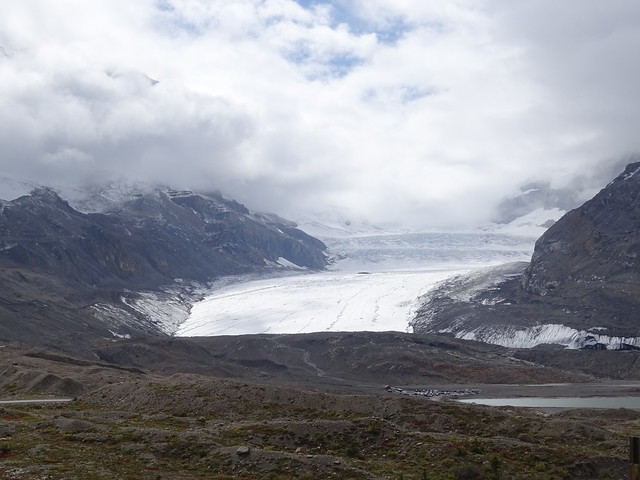 Look real closely at the center of the picture above.  See that black spot on the glacier?  A zoom shot reveals that it is a cluster of the main mode of transportation onto the glacier. 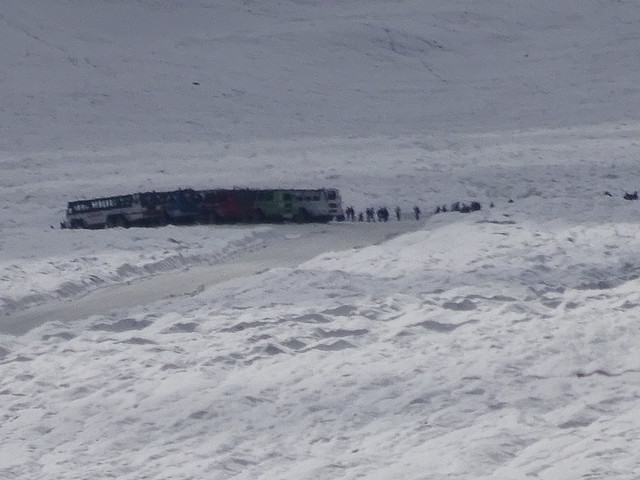 Standard buses transport tourists from the Discovery Center to the glacier edge, where they board specially designed snow coaches for transport over the steep grades, snow and ice part way up the glacier.

Across from the Discovery Center is a road leading to a parking area at the base of the glacier.  From there you can hike up the hill for a close up view.  Along the road and then the hiking path are markers indicating the edge of the glacier in previous years. 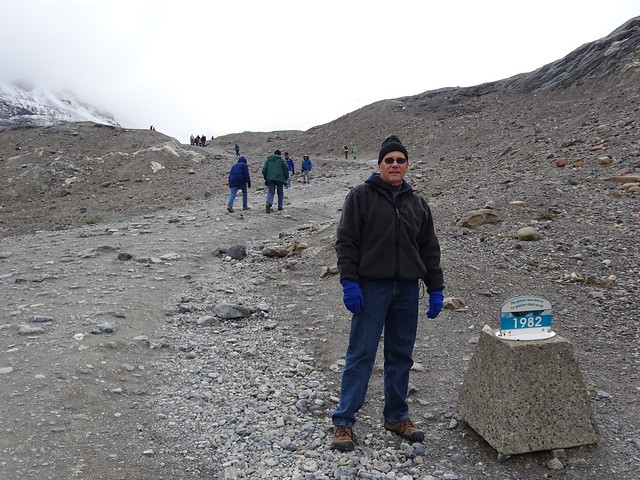 The glacier currently recedes at a rate of about 16 ft. per year and has receded almost  a mile in the past 125 years, losing over half of its volume. 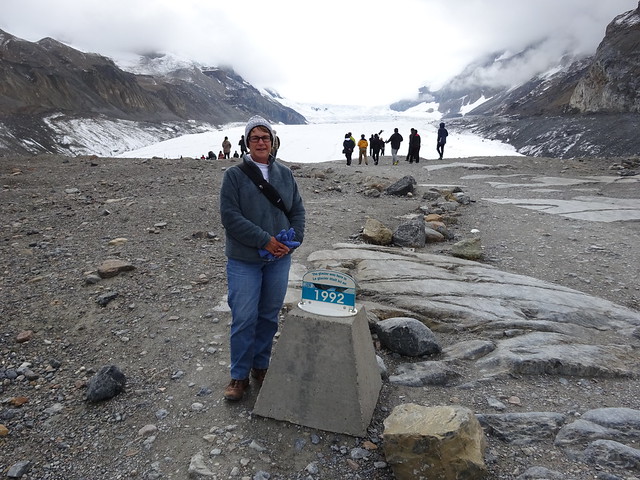 Just north of Athabasca Glacier on the Parkway is the Glacier Skywalk.  Similar to the Grand Canyon Skywalk, the Glacier Skywalk juts out over the edge of the cliff about 918 feet above the valley floor.  For $25/person you can spend an hour standing on the clear-bottomed walkway.  We passed on that great deal! 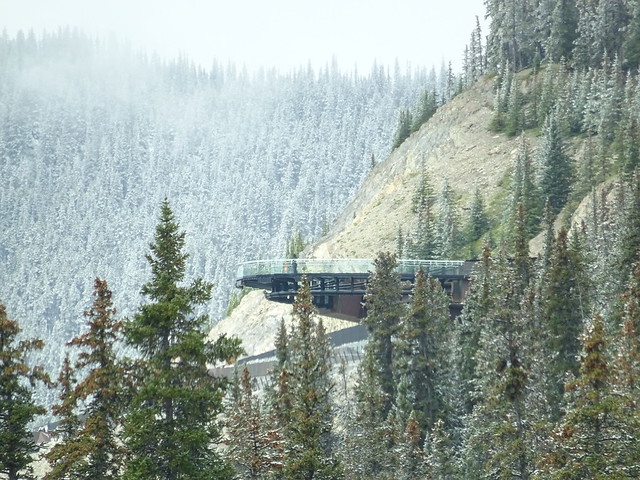 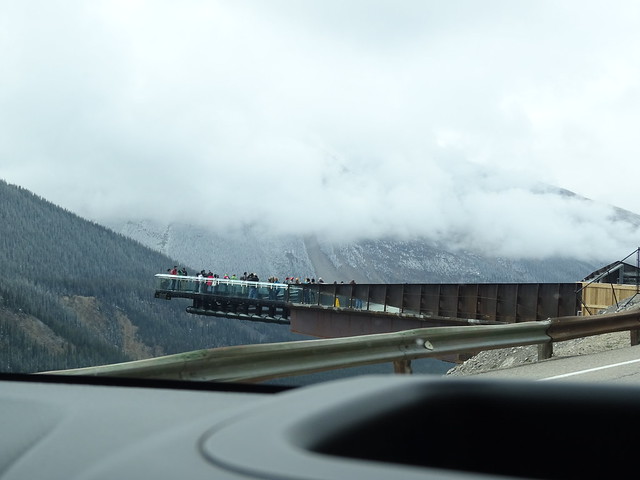 The weather people are predicting warming temperatures this week-end, so we hope to get out for a few hikes up into these beautiful mountains.  But for now we are stranded in a cold forest that is blocking our satellite dish.  Since we shut down our data plan in Canada we also are without any Internet!  Wow, we seem to be back in the 20th century.  So we are spending some quality time at the local Tim Horton’s Cafe and Bakery (free wifi) and checking out the local video rental store.

18 Responses to Cold Days in Jasper