Life in the Big (Canadian) City – Calgary and Edmonton

Posted on September 7, 2014 by placestheygo

Our main reason for traveling to Alberta is to visit Jasper and Banff, two of Canada’s most beautiful and popular national parks.  On the cruise we took last December, we were introduced to a wonderful Canadian couple, Steve and Esther, who recommended we visit these parks in September, after high vacation season.  We have reservations in Jasper beginning next week so, since we had some time on our hands till then, we decided to visit two of Canada’s largest cities, Calgary and Edmonton.

We left Waterton and drove north along the eastern edge of the Rockies.  There were mountains on our left . . . 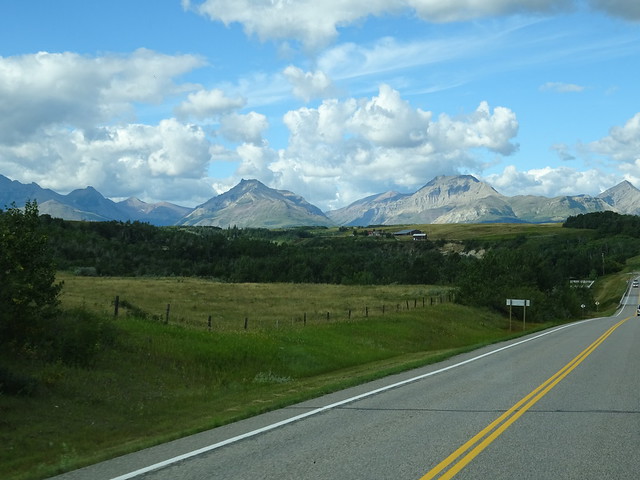 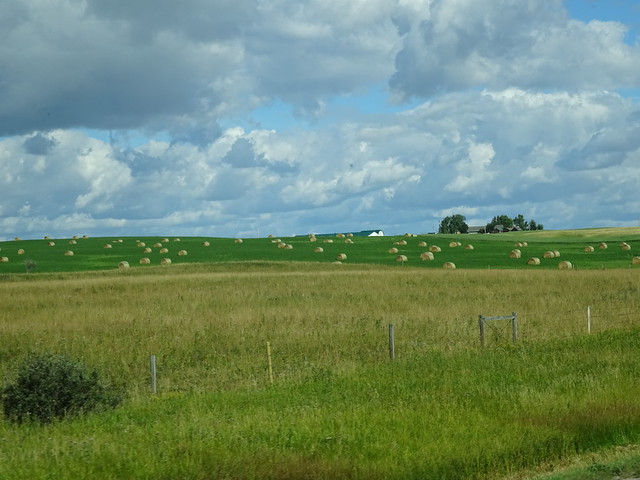 First up for us was Calgary, the largest city in Alberta with a population of over a million people.   Calgary is a diverse, rapidly growing area with a housing shortage driving a construction boom. 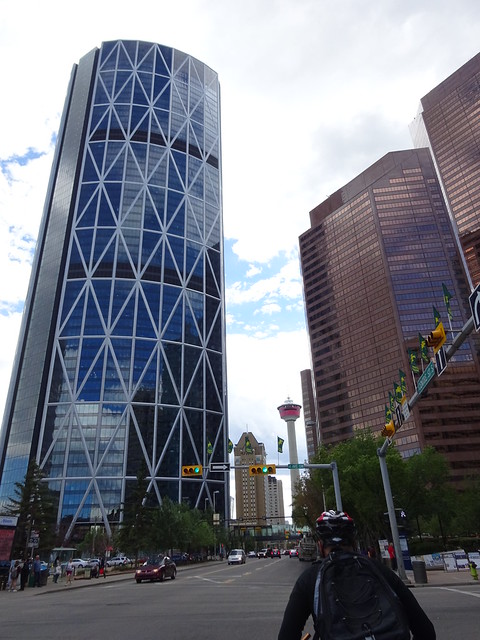 Downtown, with the Calgary Tower visible between the buildings

The Calgary Tower, seen above, was opened in 1968 as the tallest structure in Calgary and the tallest in Canada outside of Toronto.  At a height of 626 feet today it is dwarfed by many of the tall buildings that have been built around it.

The Bow River runs through the center of Calgary and is surrounded on both sides by walking/biking paths.  As we rode along the river we were surprised to find that the surf was up! 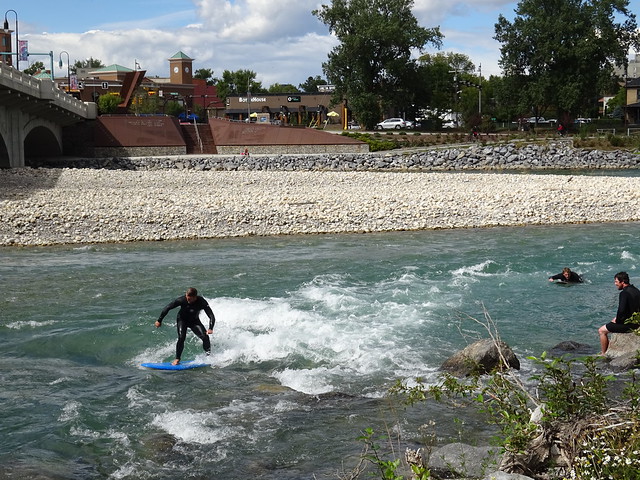 Calgary hosted the Winter Olympics in 1988, and a park in the center of the city was the scene of the numerous medal ceremonies held during the games. 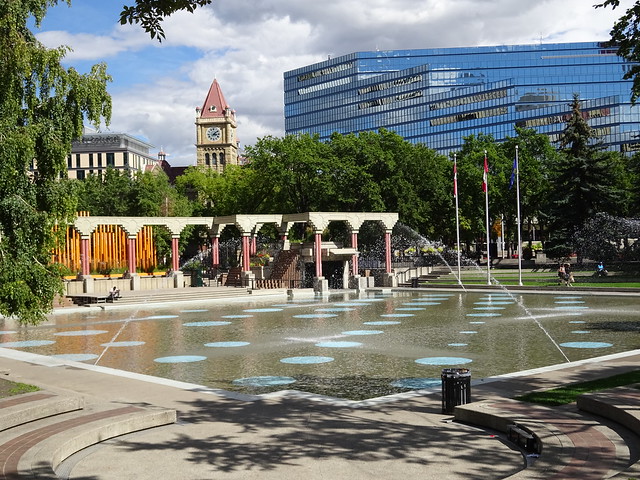 The University of Calgary is one of Canada’s top research schools and has over 25,000 undergraduates. 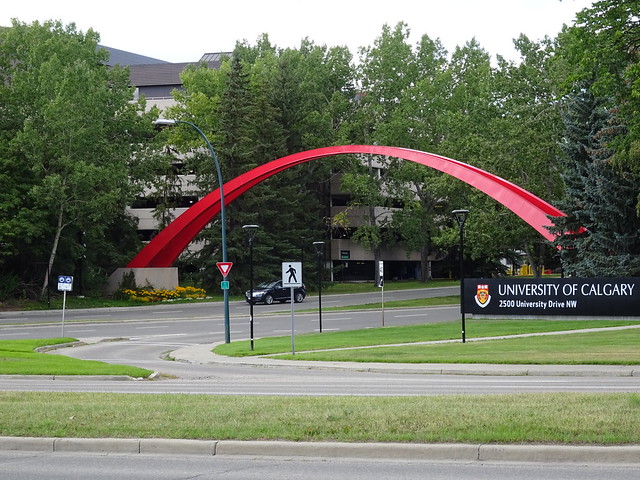 As we rode our bikes through one of the numerous parks in the city we passed an interesting competition, dog Frisbee.  The pooch below was pretty adept at catching the Frisbee but if Dave and Sue’s dog, Lewis, was here, we know he would catch the flying disc and follow it up with a “victory lap” as well! 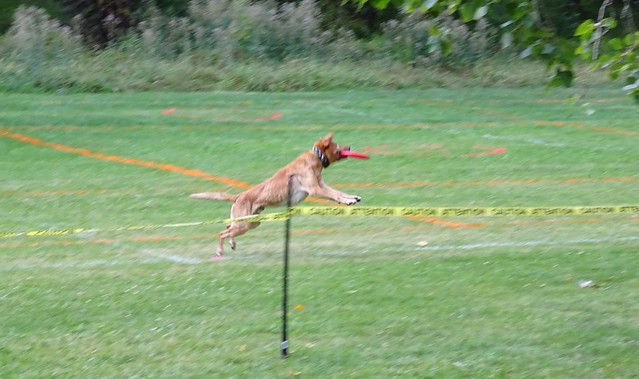 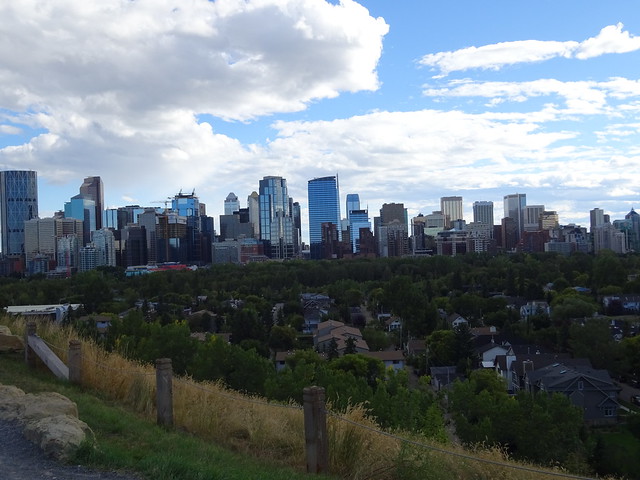 The next day we drove to the west side of town to visit Calgary Olympic Park, site of many of the events of the 1988 Olympics.  Below you can see the ski jumps on the left and the bobsled/luge run on the right. 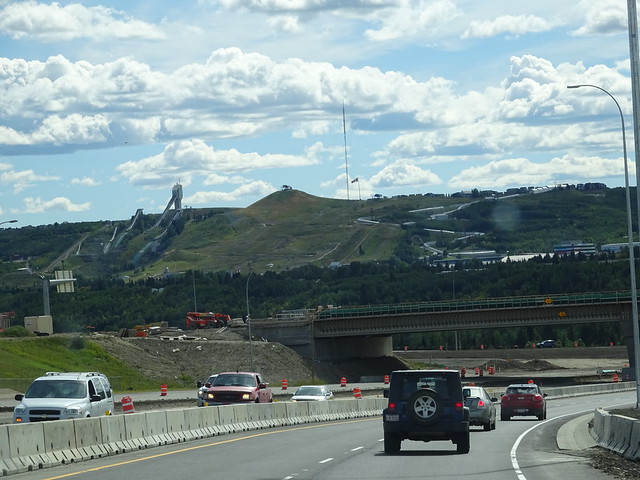 The site is now owned and operated by WinSport, a non-profit organization dedicated to training athletes at all levels in winter sports.  Many of Canada’s winter Olympians train at the site. 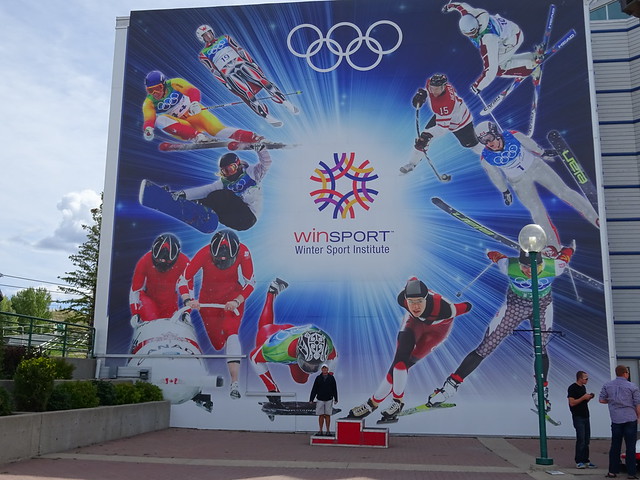 The bronze medal is awarded to a young athlete! 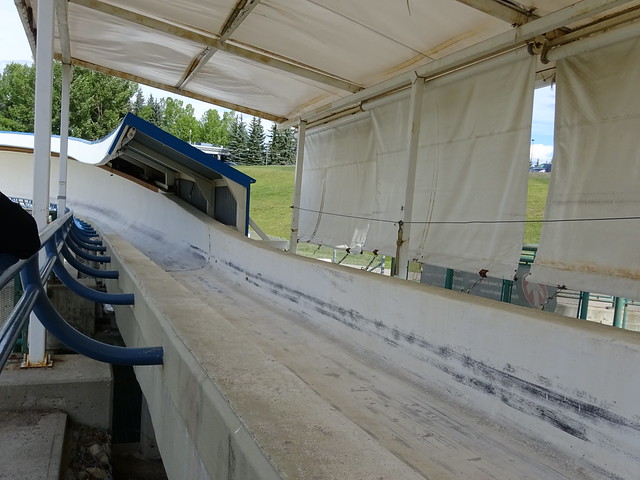 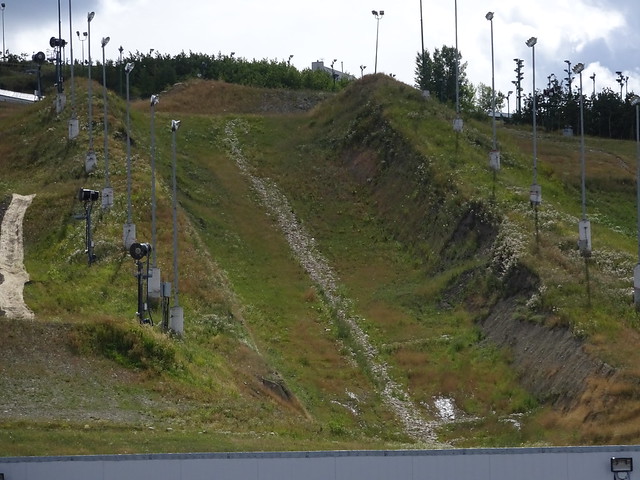 The most impressive facility in the park is the Marken MacPhail Center.  In the picture below the training facilities are in the white building on the left, while the multi-colored building holds the main office of Hockey Canada, a winter sports Hall-of-Fame, and other offices. 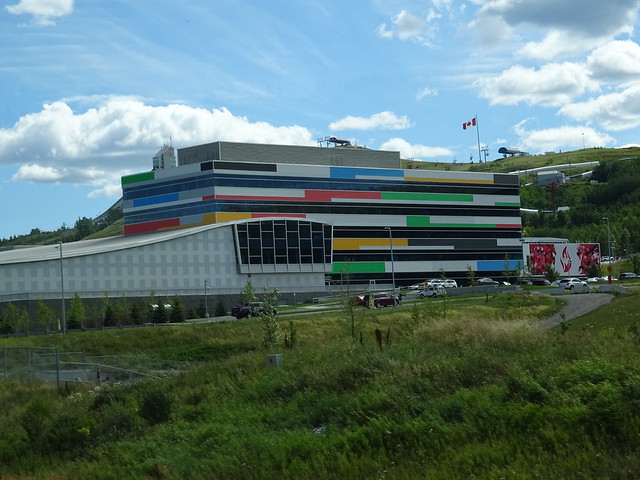 The training facility has four ice rinks.  One has an international size ice surface with  seating for 3,000.  The other three are NHL size (a bit smaller than the international rink) and limited seating and are used by the public for skating lessons, practices, and pick-up games. 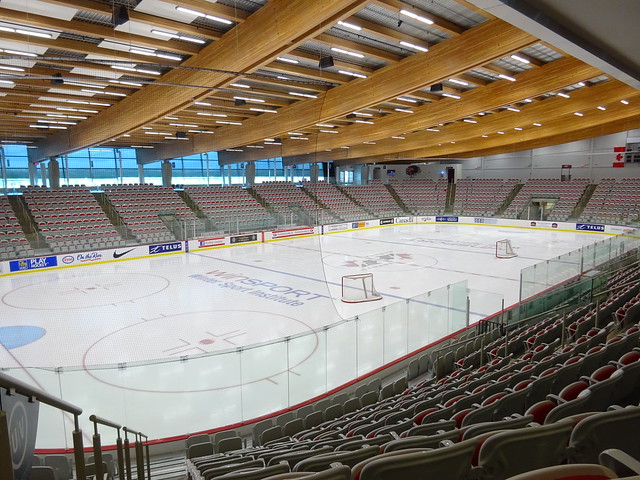 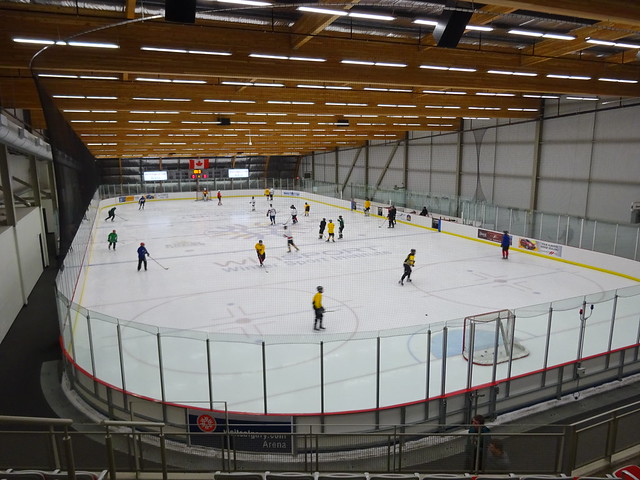 One of three NHL size rinks

The facility also houses something called the Ice House, the world’s only indoor push-start facility for Bobsled, Luge, and Skeleton.

After enjoying a few day in Calgary we continued our trek to the north for a visit to Edmonton, Alberta’s second largest city with a population of over 800,000.  One of the things we definitely wanted to check out here was the West Edmonton Mall.

This mall is the largest in North America and the tenth largest in the world.  It was the world’s largest mall until 2004.   There are over 800 stores and services (including two Starbucks!) and parking for more than 20,000 vehicles.  More than 24,000 people are employed at the property. The mall receives 32.2 million visitors per year and attracts between 90,000 and 200,000 shoppers daily, depending on the day and season.

There are a number of unique displays and activities in the mall (when you live in a cold climate like this you better have something to attract people!).  Below is the Sea Lion pool.  Yes, a Sea Lion pool with shows put on twice a day. 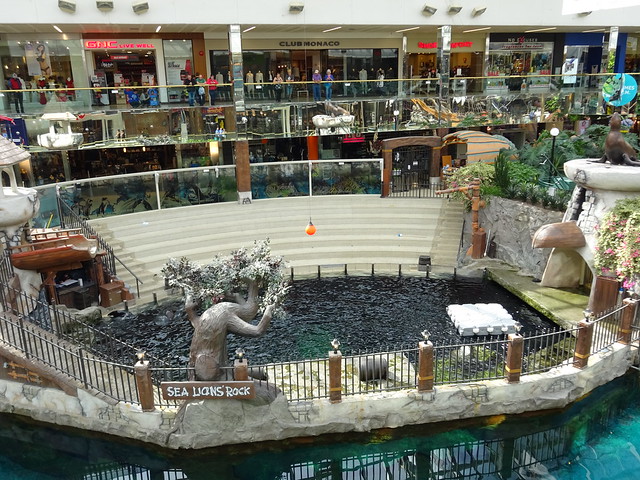 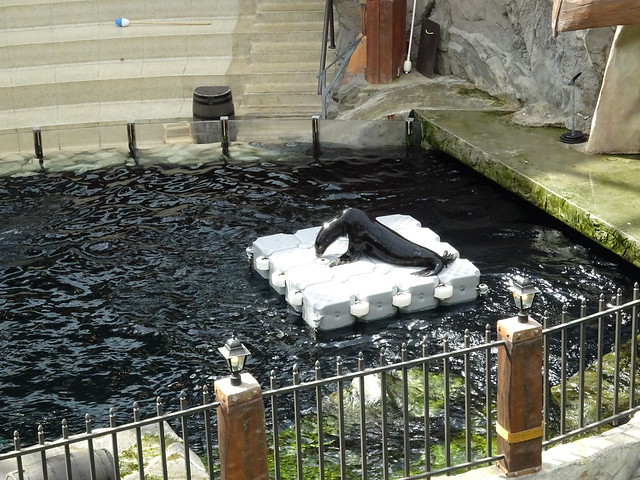 Near the Sea Lion Pool is a life size replica of Columbus’s ship the Santa Maria, built for the 1986 World Exposition and used for fund-raisers. 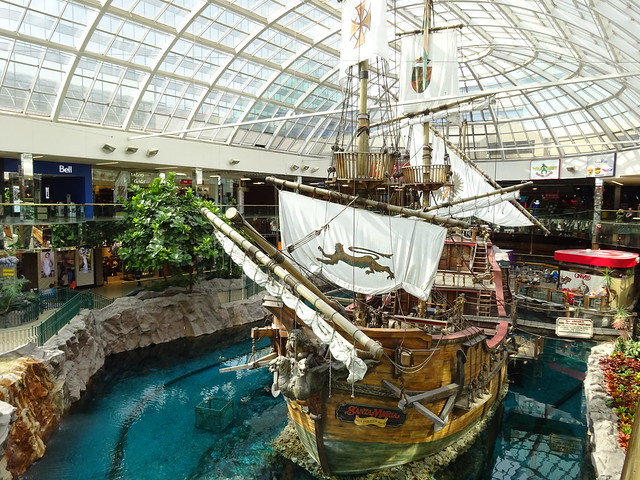 Another attraction is the World Water Park, the second largest indoor waterpark in the world, built in 1985, with a size of almost five acres.  The park has the world’s largest indoor wave pool and the highest slides in the park are 83 feet high. 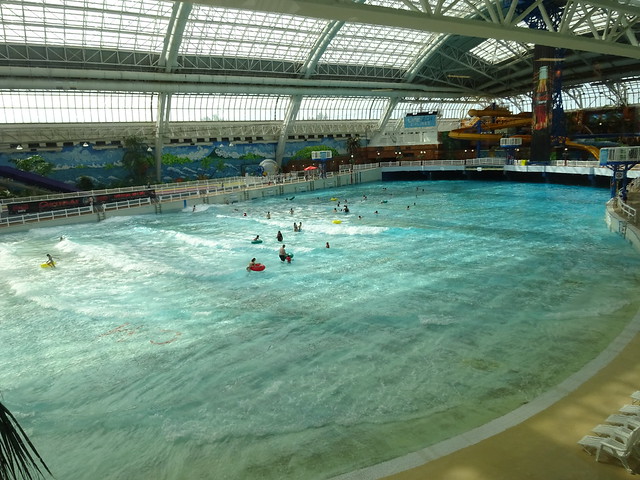 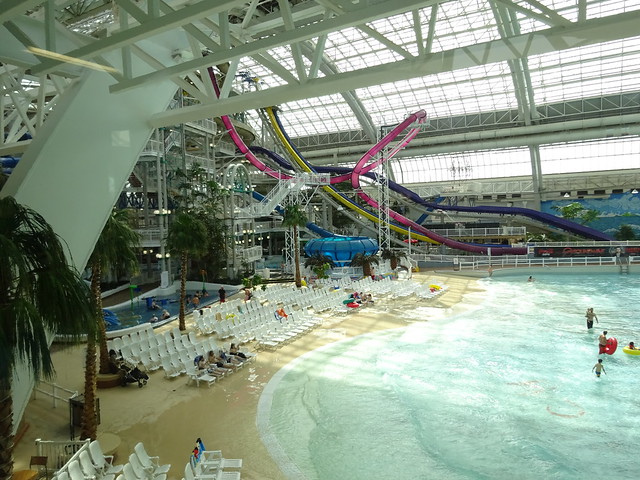 What would a huge indoor mall in Canada be without a hockey rink!  The rink below is a bit smaller than an NHL rink.  At one time the Edmonton Oilers practiced on it, drawing huge crowds during the Wayne Gretzky era.  During our visit they were setting up for a concert the next day. 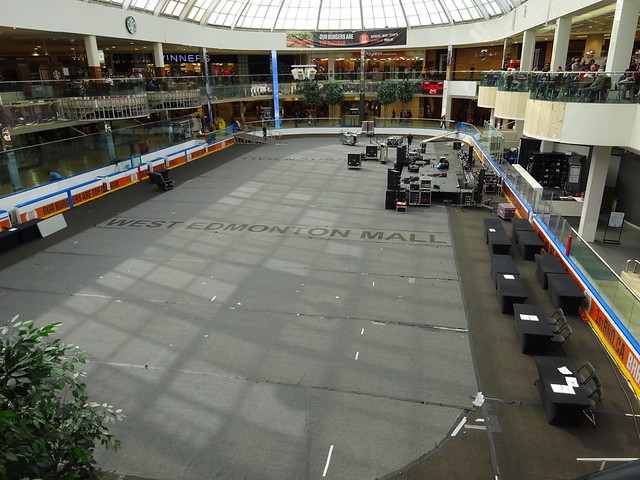 Another day we parked the Jeep in a residential area and rode a bridge over the North Saskatchewan River to the center of the city. 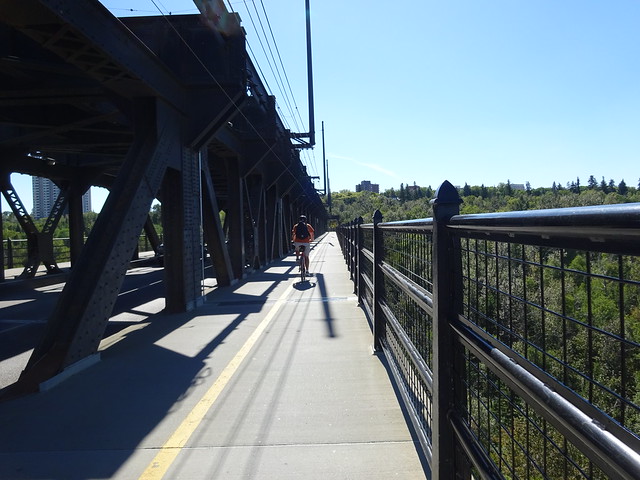 As everyone knows (OK, maybe not everyone!) Edmonton is the capitol of the Province of Alberta.  So we had to take a ride around the capitol building and check out the many fountains in front of the main entrance. 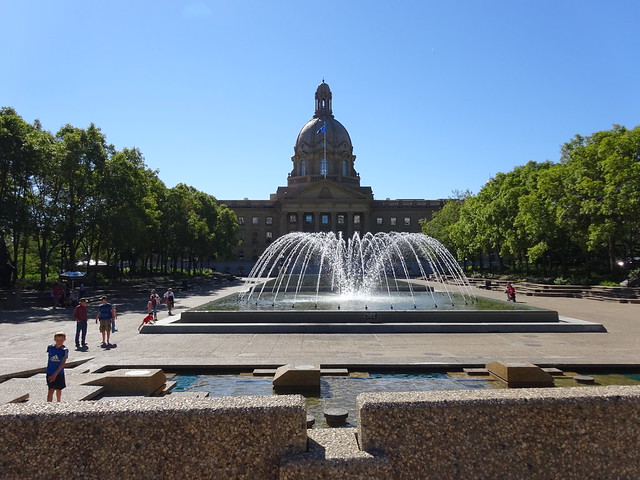 A few blocks away was the main reason for our visit to the center of the city, a large farmers’ market.  The market was filled with vendors selling all kinds of fresh fruits and vegetables.  We took an extra backpack with us and filled it with many fresh goodies! 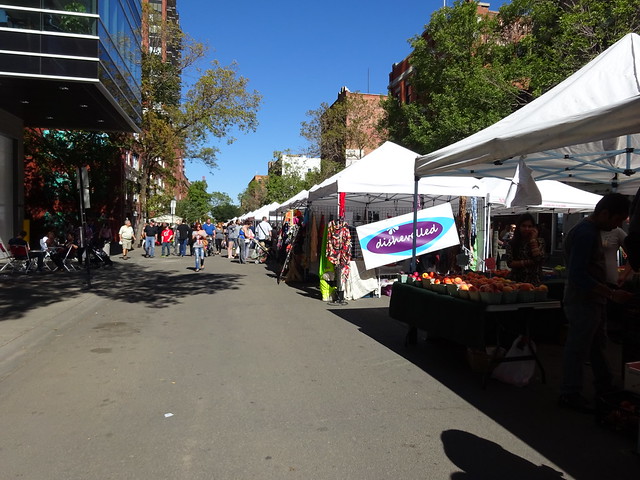 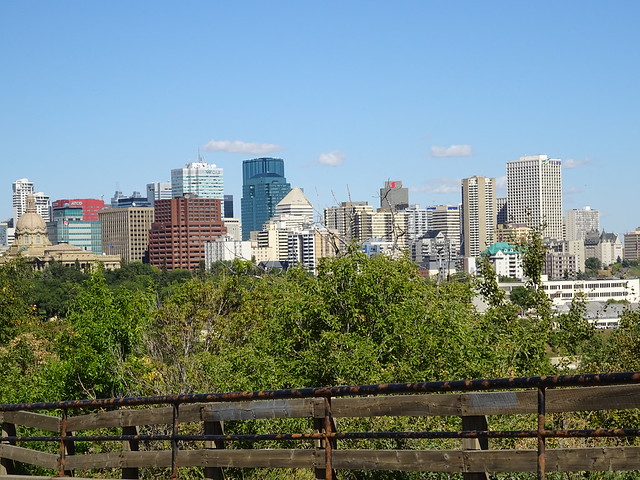 The Edmonton skyline from across the river

As big cities go, we really enjoyed both Calgary and Edmonton.  Both cities were very clean and the people were very friendly.  The only negative we could find, and it’s a big one, is the climate.  Our visit was during the first week of September and we had to run our electric heaters each night!  The predictions for the upcoming week include one night with a low temperature below freezing!

Now its time for us to head west for a visit to Jasper National Park.  More on that later . . .