Posted on September 1, 2014 by placestheygo

The first thing we did upon arriving in Waterton Park was to visit the park’s information center for hiking maps.  The volunteer there told us about a ranger led hike the next day beginning at 10:00 AM.  The hike would go along the west bank of Waterton Lake for about nine miles, ending at Goat Haunt, a tiny ranger station at the south end of the lake.  Since Goat Haunt is in the U.S. they suggested you bring your passport.  The return trip would be on one of the cruise boats on the lake. The hike would be jointly led by a interpretive guide from Parks Canada and a NPS ranger from the US.  That sounded good to us, so we signed up and headed to the boat dock to buy tickets for the return.  There is no charge for the hike but it is $27 for the boat.

The next day was sunny and warm, a great day for a hike and we arrived at the trailhead a few minutes before 10:00 . 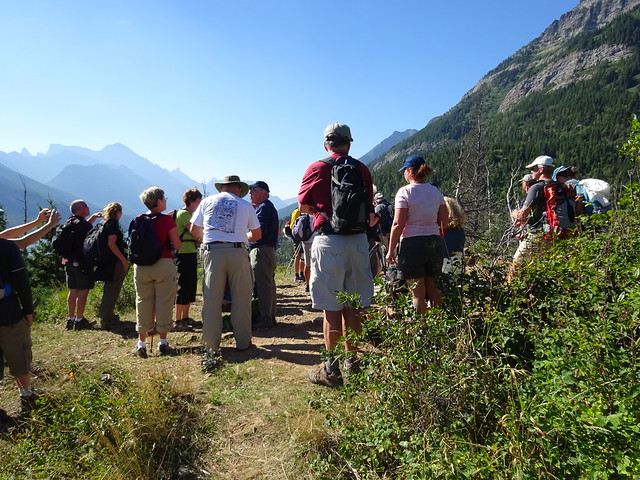 The group gathers to begin the hike 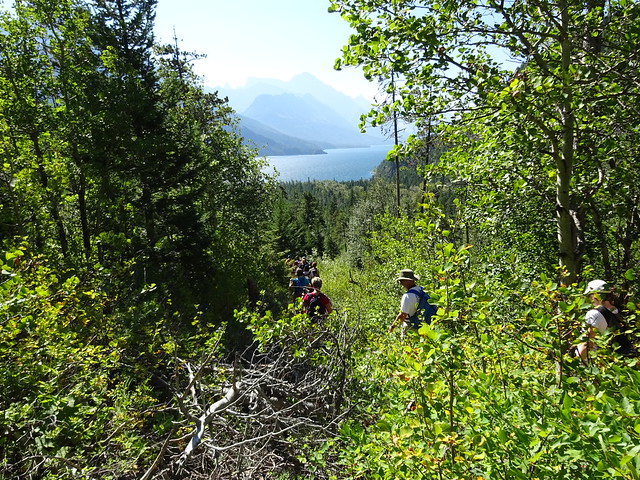 Since it was along the lake, the trail was generally flat, but it did have some “ups” and then “downs” along the way. 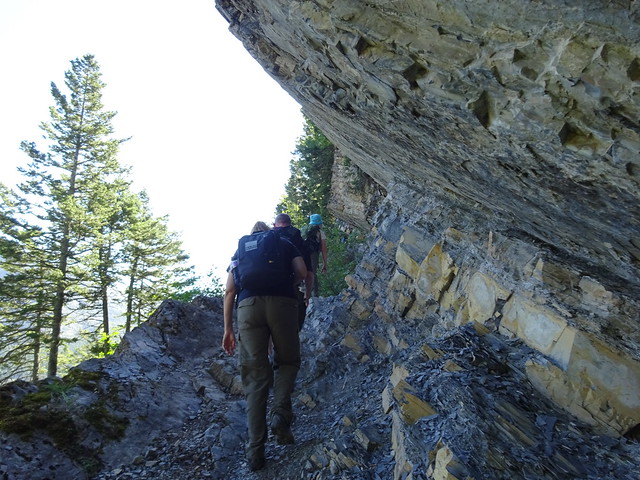 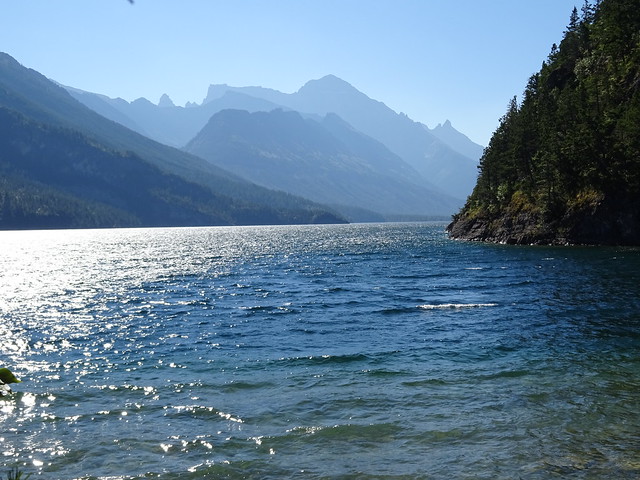 The rangers took turns leading the group, stopping along the way to give some great information about the “flora and fauna” we passed.  Below shows our Canadian guide, David, telling us about the range of travel for bears in the area and how the parks track the bears.  Note the barbed wire wrapped around the tree in front of him.  They now track bears by DNA.  Bears like to rub against trees, so when they rub against the tree with the barbed wire some of their fur is left on the wire, providing the sample needed to identify that bear. 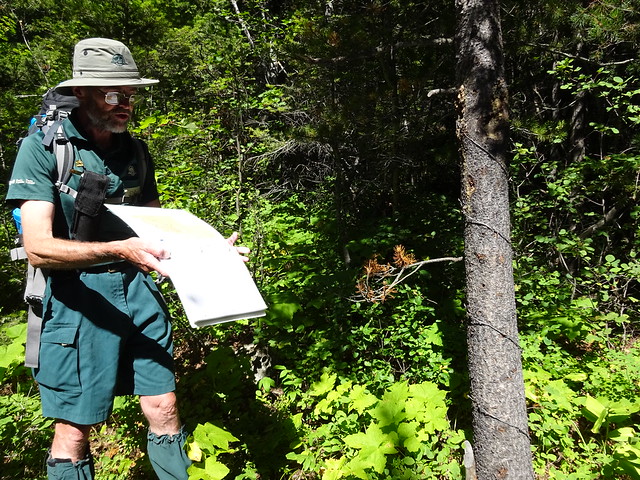 Across the trail from where David gave his talk was a motion-sensing wildlife camera used by the parks to monitor movement of wildlife (and, incidentally, hikers) in the area. 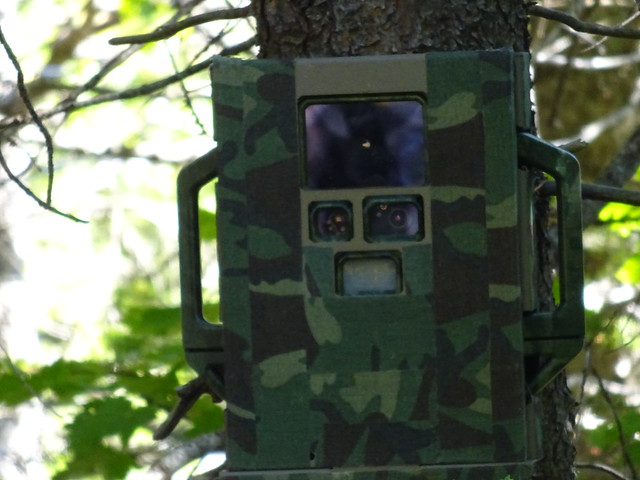 About half way down the lake you come to the Canada-US border, marked by two obelisks that recognize border treaties between the two countries. 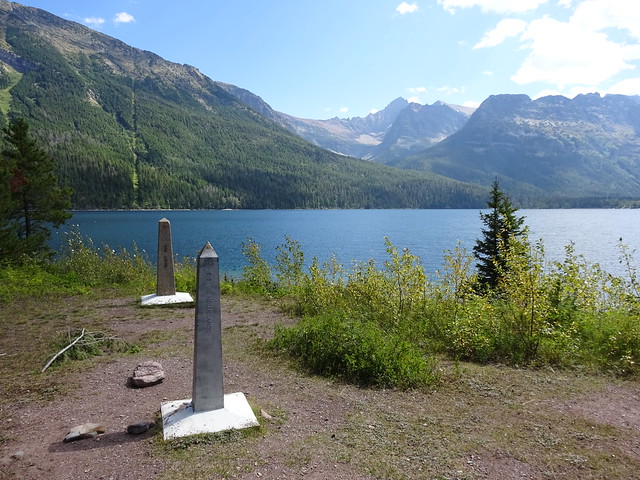 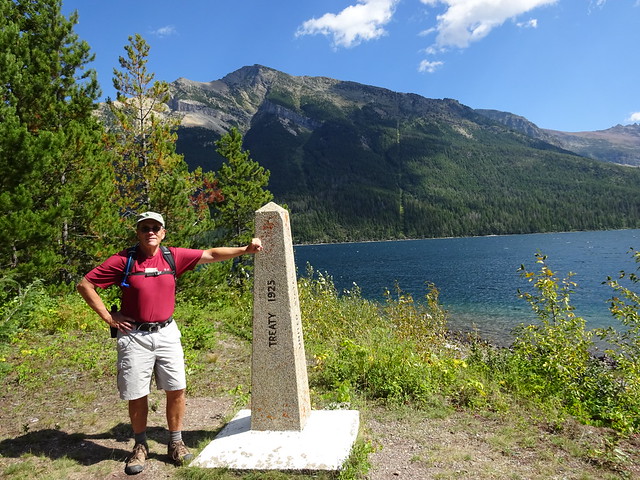 An American stands in Canada

A tradition on this hike is to preform a ceremony called “Hands Across the Border” to recognize the friendly relationship between Canada and the U.S. 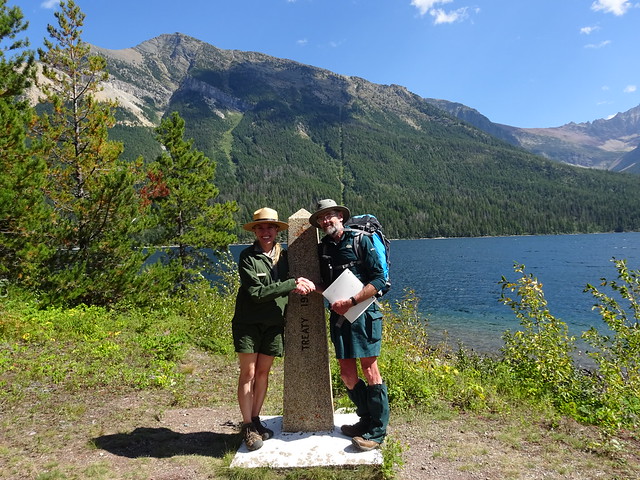 Hands Across the Border

Looking across the lake at the border you can clearly see a line going up the mountain.  Yes, that is the border. 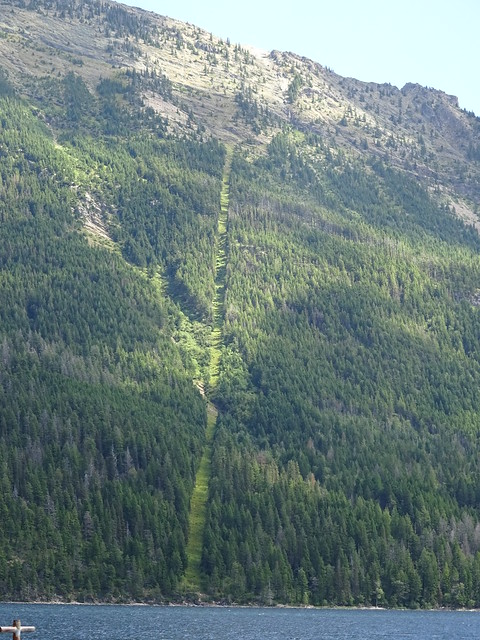 In 1925, the International Boundary Commission was established as a permanent organization responsible for surveying and mapping the boundary, maintaining boundary monuments (like the obelisks), as well as keeping the boundary clear of brush and vegetation for 20 feet.  This “border vista” extends for 9.8 ft on each side of the line.

At one point the trail led over a fixed bridge crossing a stream with rapids. 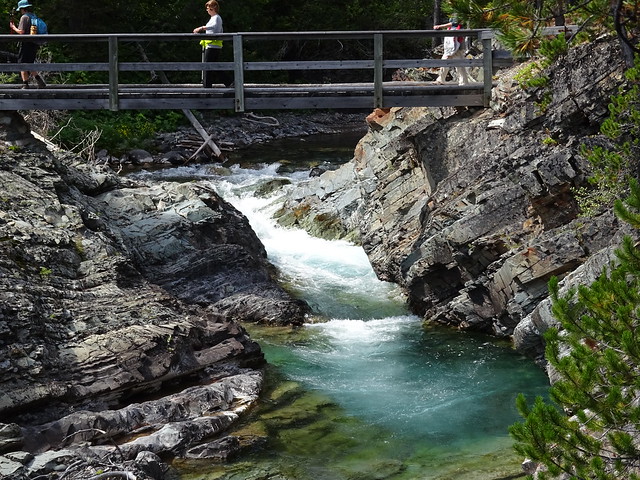 At another spot it crossed a wider, slow moving river on a wobbly suspension bridge.  Since only one person was allowed on the bridge at one time it took a while for the thirty people in our group to cross, but nobody fell into the river. 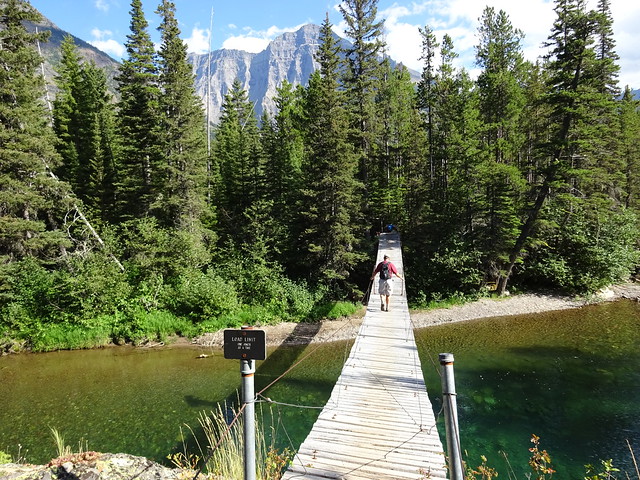 At the end of the hike we rounded a curve in the trail and the Goat Haunt Ranger/Customs hut came into view next to a picnic pavilion. 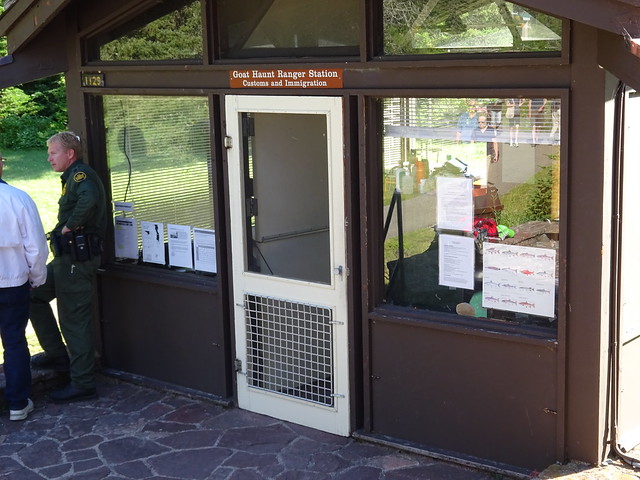 If you came down the lake on the boat and wanted to do a little hiking, you had to first clear customs, as the boat trip began in Canada and Goat Haunt is in the U.S.  Apparently there must be illegals who take the boat to this point, then hike the 20+ miles through the wilderness to enter the U.S. illegally, so it is definitely worth the expense of posting 2-3 customs agents there every day! 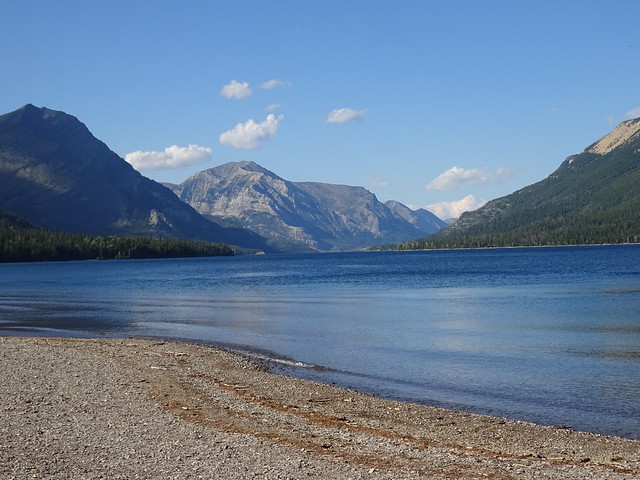 Looking back north from Goat Haunt

We arrived just a few minutes before the last boat departed back into Canada so we were able to board and get comfortable for the return trip without delay.  The U.S. customs guys rode the boat back with us, so if anyone hid in the bushes along the lake they were free to stay in the U.S. (hope they had their bear spray!).

Arriving back at Waterton Park tired and hungry we looked for somewhere to have a healthy, nourishing meal.  Someone on the hike recommended the health food establishment pictured below, so in we went! 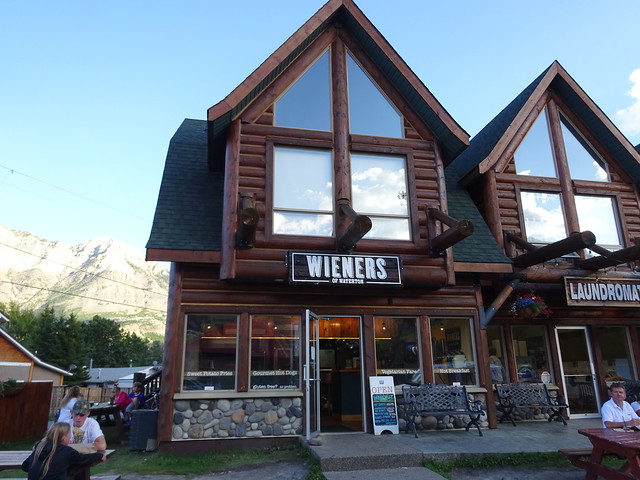 Nothing like a foot long hot dog and fries to rejuvenate the soul and body! 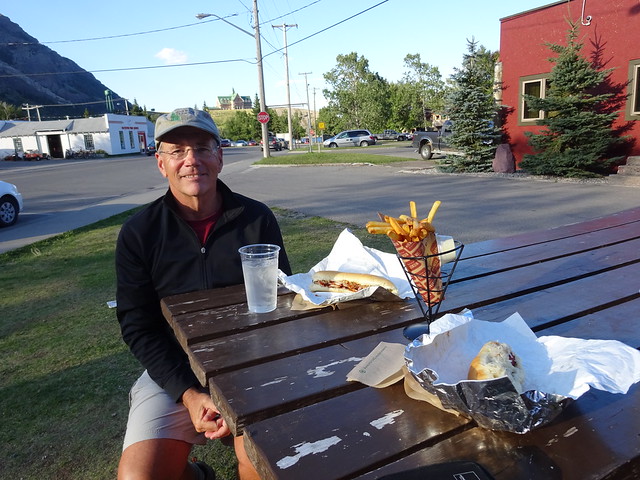 Hiking with guides who know the area is always a great activity.  Our guides were very informative and taught us a great deal about the area, especially the variety of plant life along the trail.  We had a great time!